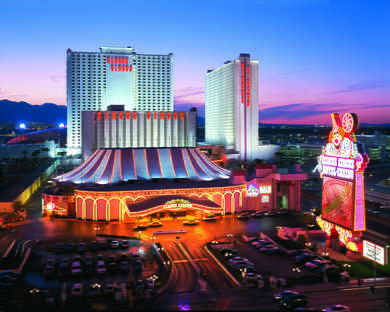 The hotel at the "Big Top" has renovated all of its rooms since 2009, giving some much-needed TLC to some of the oldest rooms on the Strip (the resort opened in 1968). Other accommodations on the property range from luxury (in the Skyrise Tower, which includes its own casino) to campsites—the KOA Circusland RV park is the only one of its kind on the Strip. In the casino, gaming is nothing if not affordable; in addition to rock-bottom table limits (blackjack as low as $2 a hand!), dealers offer complimentary lessons in blackjack, roulette, and craps. Still, the biggest draw at this hulking resort is the Adventuredome Theme Park, Nevada's largest, featuring more than 25 rides. The Midway Stage—all 120,000 square feet of it—holds a world record as the world's largest permanent circus.

From the detached-from-the-hotel motor lodge to the casino tower rooms to the RV park where you can park your own wheels, Circus Circus can accommodate any size group without breaking the bank.

All bathrooms are outfitted with the basics including hair dryers and a comfortable shower. For an upgraded experience, suites come with Roman tubs.

The Circus Circus lobby is full of guests of all ages, from kids who roam the arcade to their parents playing slots. Think of it as controlled chaos and get into the spirit, for the kids’ sake.

Circus Circus is still a casino, which gives parents some adult entertainment, but the big draw here is amusement for the 16-and-under set. The Adventuredome is 5 acres of fun for all ages, featuring roller coasters, bumper cars and so much more. Meanwhile, the ESC Game Theater offers an interactive social gaming experience in a custom gaming theater with high-definition graphics on large screens, surround sound and theatrical special effects. And of course, there’s the legendary Midway, where every kid in who grew up in Vegas has spent some time in. More than 200 classic games and free circus acts starting at 11:30 a.m. daily keep the kiddos entertained until bedtime.

When pool season opens around March, Circus Circus’ Splash Zone is the best place to deposit the kids. More than an acre of aquatic fun, it features slides, whirlpools and swimming pools. For adults, there are cabanas for rent so you can stay in the shade and sip cocktails while keeping an eye on the kids.

In October, the Adventuredome transforms into Fright Dome, 250,000 scare feet of pure terror. With 25 rides and attractions and nightly live show, it’s a haunted house that will haunt you and the kids all year long.

Few people know this, but THE Steak House (with all caps THE) at Circus Circus is long known to be one of the best steakhouses in the city. Locals have been coming here for the mesquite-grilled dry-aged steaks and prime rib for more than 30 years. Other dining options include Vince Neil’s for burgers and burritos, the Pizzeria and the Circus Buffet.

Vince Neil’s Tatuado Eat Drink Party has cold beer and lavish cocktails, so you can live out your rock-star fantasies.

YOU SHOULD KNOW One of the most appealing aspects of staying at Circus Circus is the price point, which is budget-friendly for families. However, note that the motor lodge is not attached to the casino and not as convenient as staying in the tower rooms. Also, food choices are not as expansive as other properties and most close after midnight, but the kids will hopefully be tuckered out by a full day of excitement so this isn’t a deal-breaker.

If you didn’t drive here, you’d need a car or an Uber. Better yet, hop on the Deuce, the local double-decker bus, and get around town. It might take a second to figure out the schedule, but the kids will have a blast riding on the top floor.

If you can wrench your kids from the attractions and want to get to other popular Strip spots, you’d need a car. Uber it to other properties, or, if you want to do a little shopping, Fashion Show mall is nearby and offers endless shopping options. You are also a short car ride away from Downtown Las Vegas’ many attractions, including the Fremont Street Experience and Container Park (15-minute drive), also kid-friendly, with lots of dining options like Perch and Cheffini's Hot Dogs.

Also at Container Park (15-minute drive) is Oak & Ivy, a craft whiskey cocktail bar, and Bin 702, which has the most comprehensive selection of wine available on tap in Las Vegas.

While it’s not for everyone and certainly not for those without children, Circus Circus a great option for a family vacation. The price point is just right, and there’s enough to do for the kids to keep them amused for days on end. And while there are no fancy restaurants to speak of, it has what every kid wants--a pizzeria. It’s not fancy, but the memories the kids will take with them is priceless. 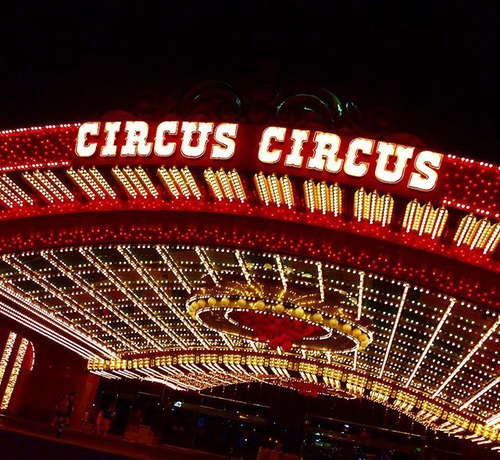 #5 The 6 Best Hotels Near the Las Vegas Convention Center