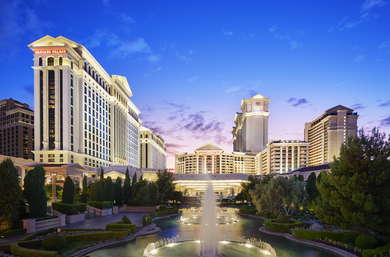 The opulent entrance, fountains, Roman statuary, bas-reliefs, and roaming centurions all add up to the iconic, over-the-top Las Vegas hotel. Here you can get your picture taken with Caesar, Cleopatra, and the centurion guard; find the full-size reproduction of Michelangelo's David; or amble along Roman streetscapes in The Forum Shops to see replicas of iconic fountains from Italy. Caesars was one of the first properties in town to create rooms so lavish that guests might actually want to spend time in them. For $70 to $100 or more per night, you can book a Deluxe Room in the Octavius or Augustus towers. If you're a real big-spender (think five figures a night), book a Villa; these houselike hideaways were designed for whales but were opened for public bookings in early 2014. Another option: rooms in the elegant Nobu Hotel, a Japanese-theme hotel-within-a-hotel. The second floor of the Augustus Tower features Qua Baths & Spa, and Guy Savoy, the famous French chef's first restaurant outside of Paris.

Caesars Palace offers three types of room: deluxe, suites and villas. The interiors belie the Roman theme of the casino, offering modern touches throughout such as mirrored panels and neutral palettes. To feel like a Roman god, book yourself a villa pronto, which ranges in size from a modest 2,000 square feet to more than 11,000 square feet.

YOU SHOULD KNOW Caesars Palace is one of the most heavily trafficked hotels on the Strip. It’s hard to find a quiet area on the main floor, and there’s a massive line that snakes at the entrance of Omnia later in the evening. If you stay here and you’re looking for a quiet place, your room is it. 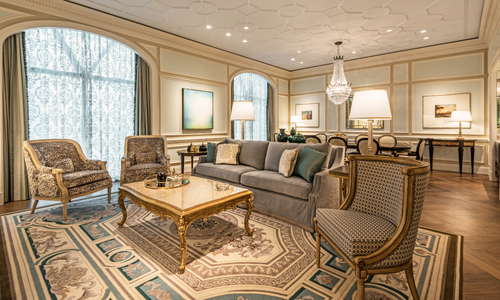 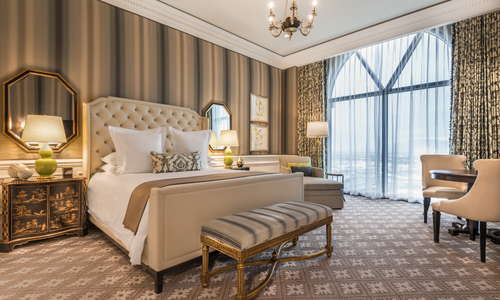 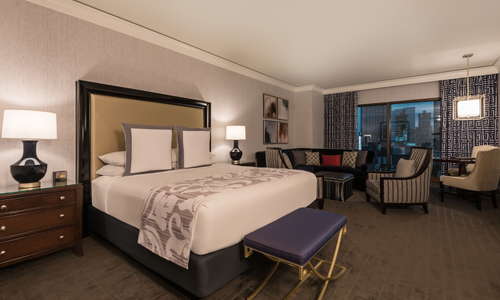 The stone and glass deluxe room bathrooms feature a double sink vanity and handheld showerheads, while the Villa bathrooms exceed the limits of your imagination. But if you imagine gilded vanities, Italian marble and a high-end toilet with a remote control, then you’re close. 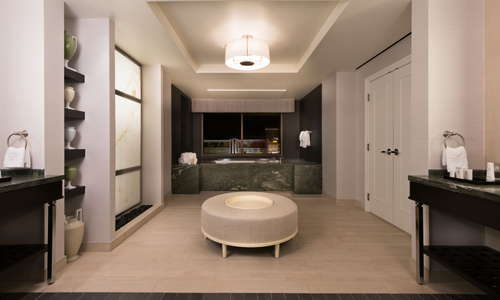 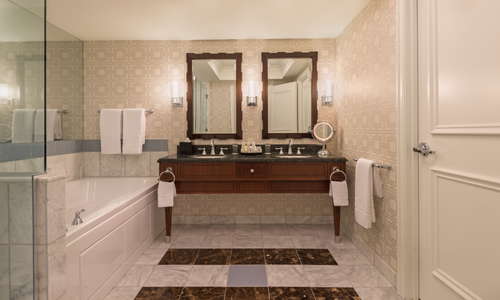 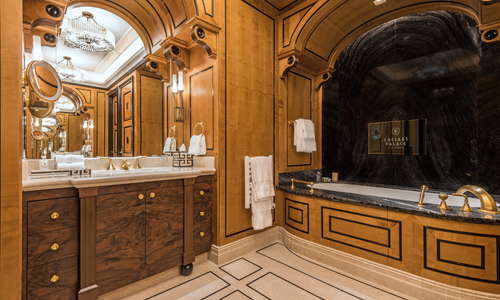 The Caesars Palace lobby is always hopping with activity, and the best way to fuel up for the people-watching is to grab a quick bite either at Brioche by Guy Savoy, where the overspilling brioche practically claw at you, or the newly opened fast-casual Pronto by Giada, from the goddess of Italian-by-way-of-California cuisine herself. 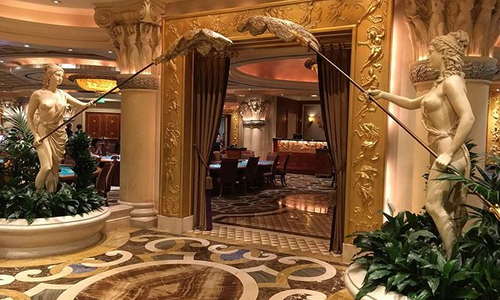 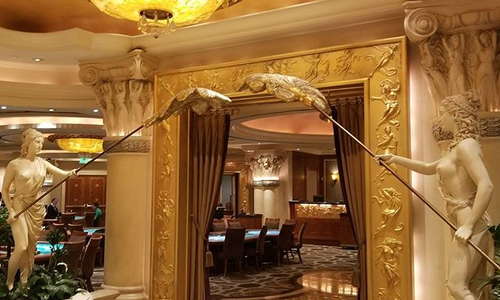 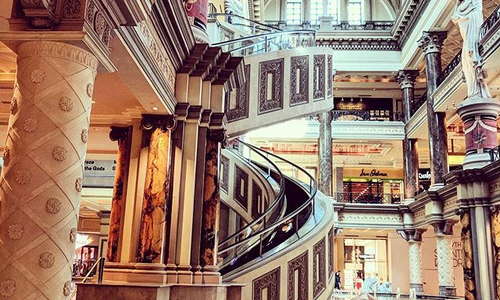 The Garden of the Gods Pool Oasis is a collection of seven exclusive pools, where you can sunbathe in style in lavish cabanas while sipping on cocktails. Meanwhile, the Venus European Pool Lounge lets you skip the tan lines altogether. The 10,000-square-foot retreat offers 14 cabanas, 16 daybeds, 10 couches and plenty of chaise lounge chairs to soak in the sun. 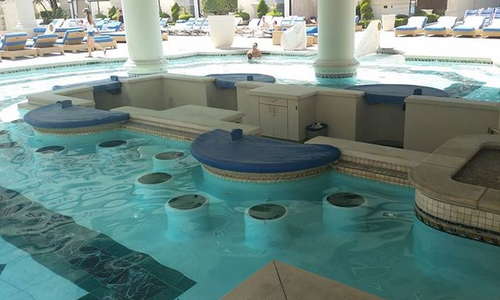 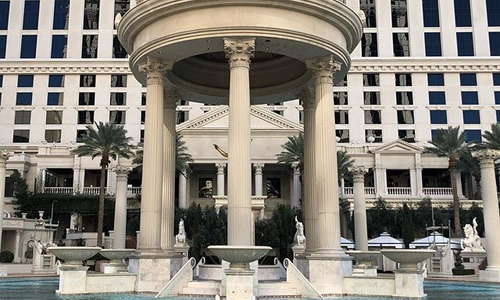 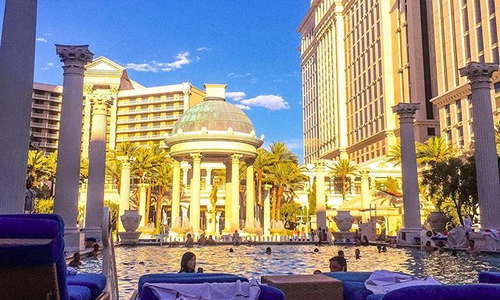 Photo: Even though it was a scorching 115 degrees the entire time I was there, I found a little time to escape and enjoy the view. #lasvegas #caesarspalacepool #caesarspalace #poolside #worktrip #conclave2016 / @chic_niq_

Qua is a 50,000-square-foot spa experience that features a unisex laconium room (a heated stone room), three Roman baths and a snowing Arctic ice room, the only one of its kind in the world.

Michael Boychuck’s COLOR Salon is a celebrity magnet. Feel like a VIP yourself when you step into the stunning space with its chandeliers and vanities and be made over as you sip Champagne and specialty drinks.

Are there more Roman statues or celebrity chefs at Caesars Palace? It’s a toss-up, but here is where your foodie dreams come true. Gordon Ramsay practically lives here, and the newly opened Hell’s Kitchen (the first in the States) is already garnering rave reviews. Throw in Guy Savoy Restaurant, Nobu, Brian Malarkey’s Searsucker, celebrity magnet Mr Chow, Bobby Flay’s Mesa Grill and Rao’s and you won’t be leaving for a while. And where to begin with Bacchanal Buffet, which rewrote the book on what a buffet is? Try it and you’ll find you can’t really eat it all. But that’s OK—tomorrow is another day.

The true star of the Lobby Bar at Caesars Palace is the mixology program created by famed mixologist Tony Abou-Ganim, who created eight signature cocktails such as The Tennessee Highball #2 and The Chairman's Manhattan, both created with Jack Daniel's Sinatra Select Tennessee whiskey. For an homage to Caesars' true origin, check out Cleopatra’s Barge, a classic Vegas lounge if there ever was one. You’ll feel like true ancient royalty here.

Caesars Palace is one of the most heavily trafficked hotels on the Strip. It’s hard to find a quiet area on the main floor, and there’s a massive line that snakes at the entrance of Omnia later in the evening. If you stay here and you’re looking for a quiet place, your room is it.

Caesars Palace enjoys one of the most prominent locations on the Strip, smack in the middle with endless options for branching out to other resorts. But be forewarned that while neighboring properties like The Mirage and The Linq look close, it’s still a lot of walking, and this is especially challenging in the summer when the temperatures rise about 100. Still, walking is the best way to soak in the Strip, and Caesars provides a good base. To venture out farther, like to Chinatown or Downtown, take an Uber.

Gordon Ramsay Fish & Chips in the Linq (5-minute walk) is a fast-casual way to try the celebrity chef’s cuisine without breaking the bank. For something more elegant, Giada’s in The Cromwell (7-minute walk) has one of the best views of Las Vegas Boulevard from its dining room.

Head to The Mirage for Rhumbar (10-minute walk), a mecca of all things rum, and listen as DJs spin on the Caribbean-style patio. If you’re more of a sports fan, The Still (10-minute walk) is a man cave disguised as an elegant bar. Here you’ll find craft beer, cocktails, and 27 flat-screen TVs

Caesars Palace is replete with Vegas lore and history. Even though many resorts are moving away from their thematic identities, it has not abandoned its founder’s original vision, and has, in fact, continued to build upon it. It was a hotel founded on the ethos that all are welcome (thus, the lack of apostrophe in Caesars, because this is everybody’s palace), and the hotel’s impeccable service bears this out. 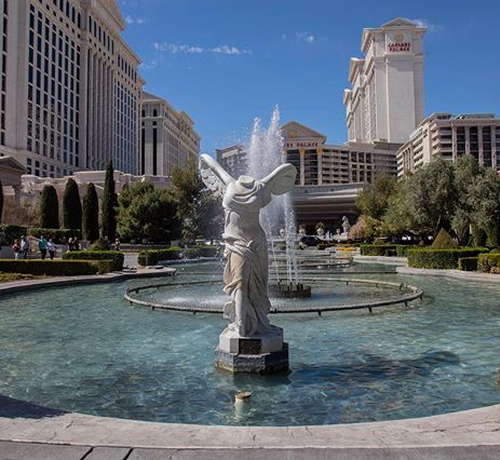 #1 The 14 Best Hotels on the Las Vegas Strip

#2 13 Hotels With the Best Shows in Las Vegas 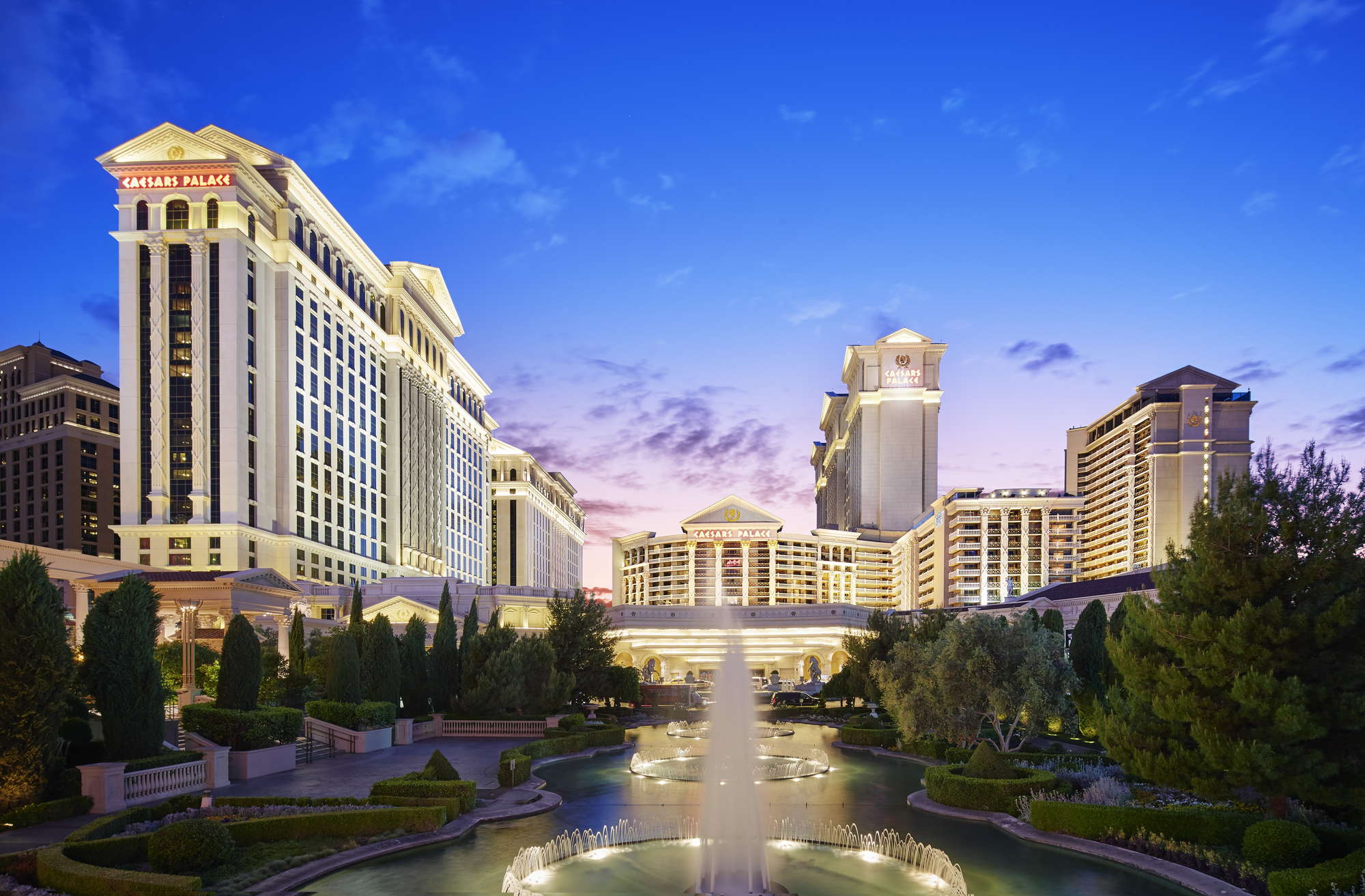 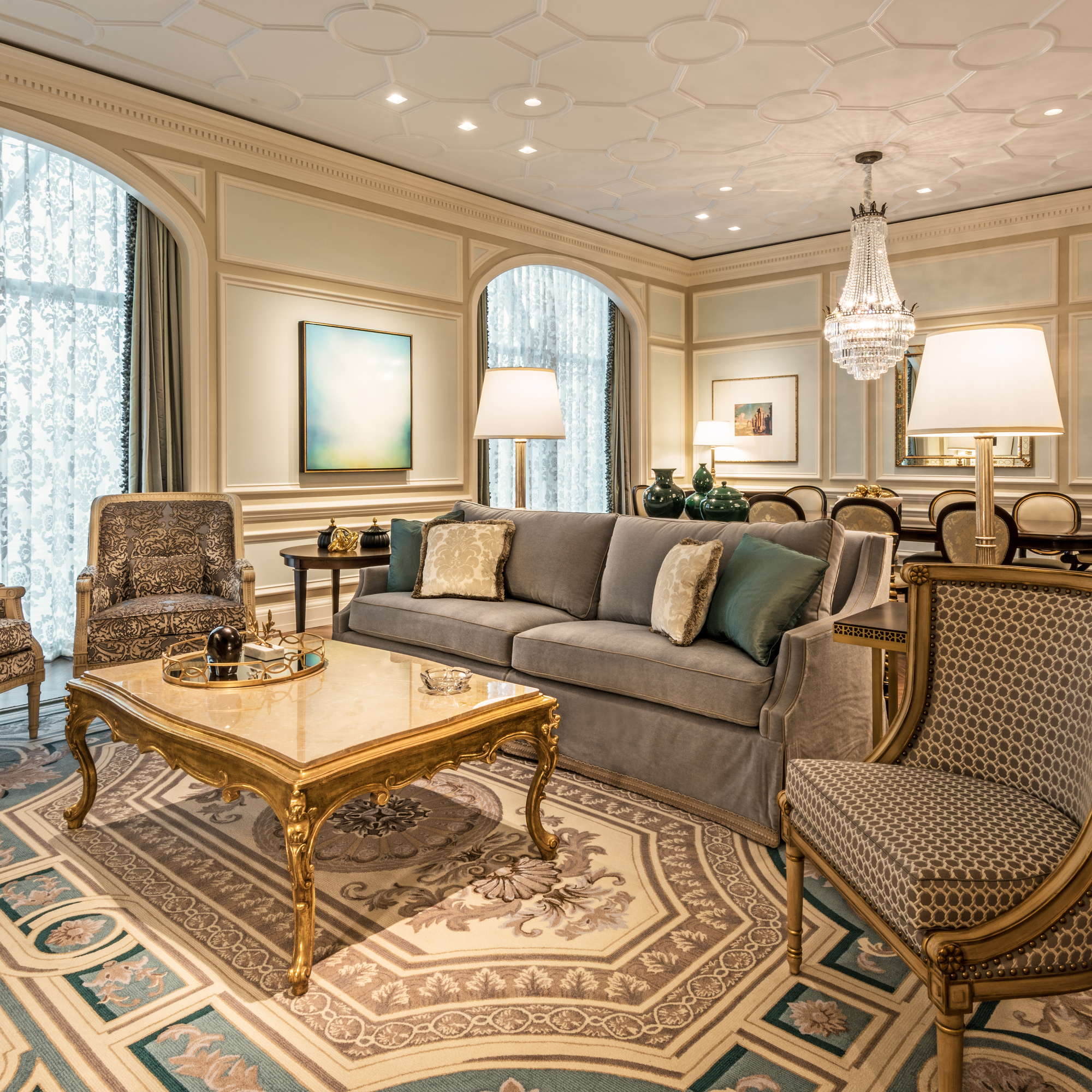 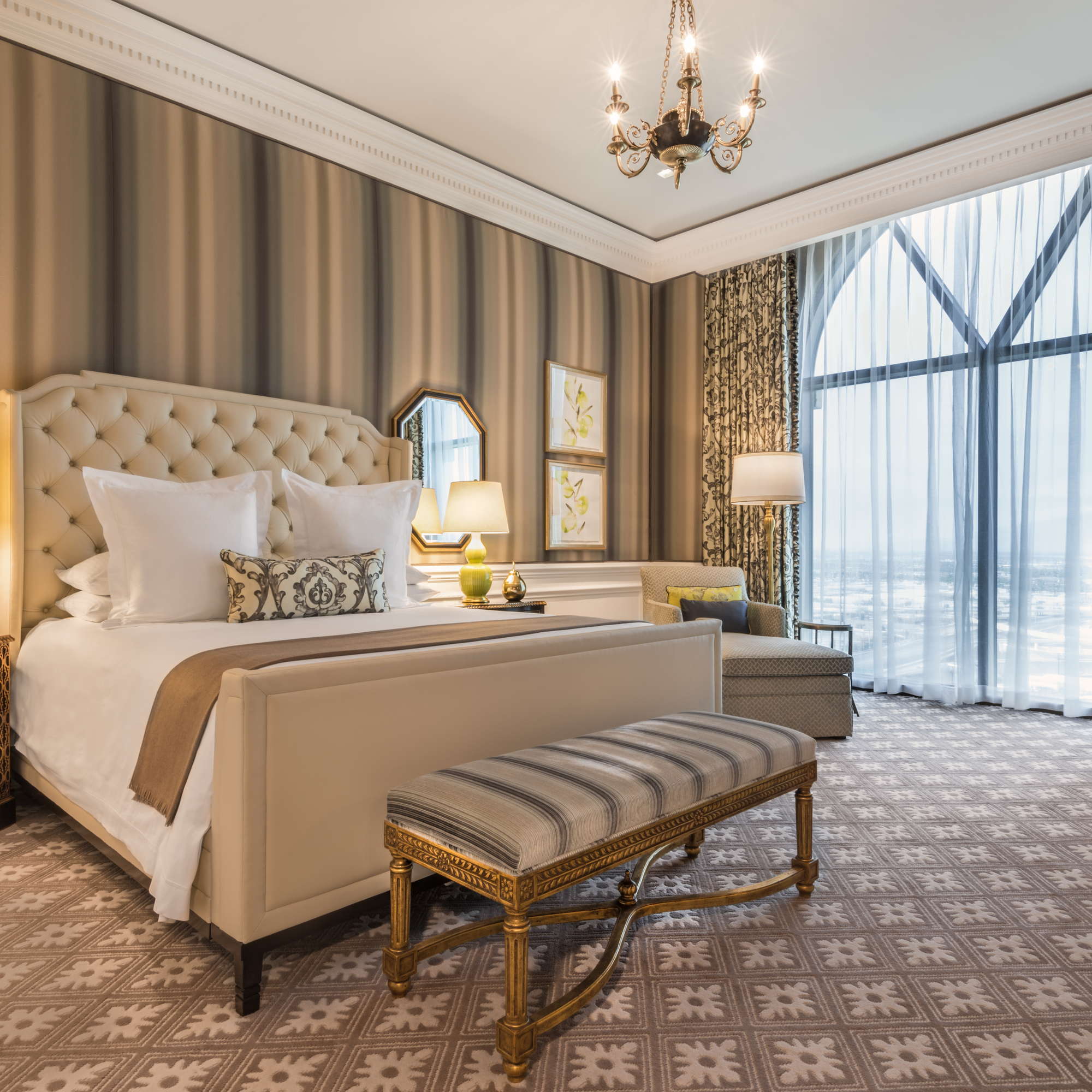 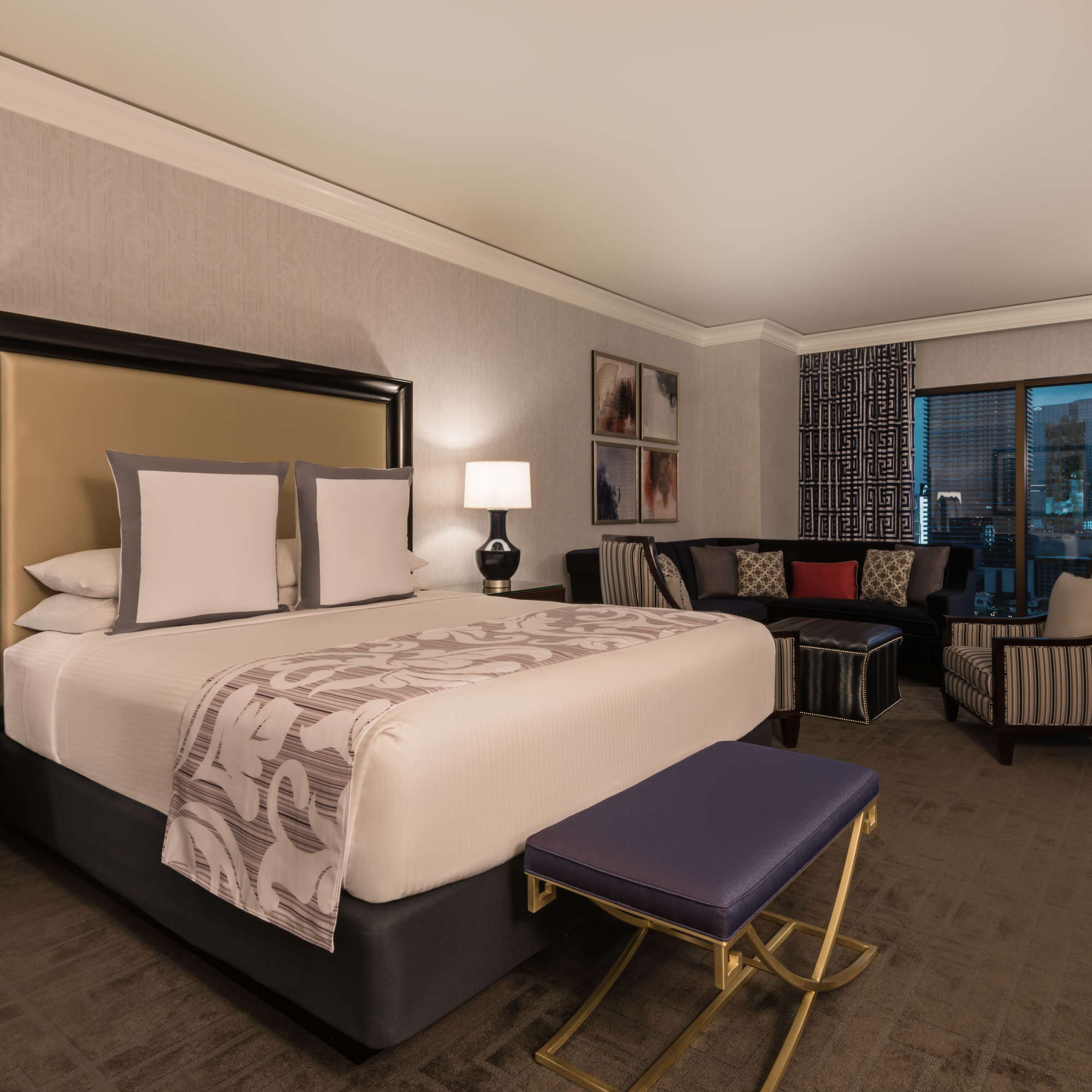 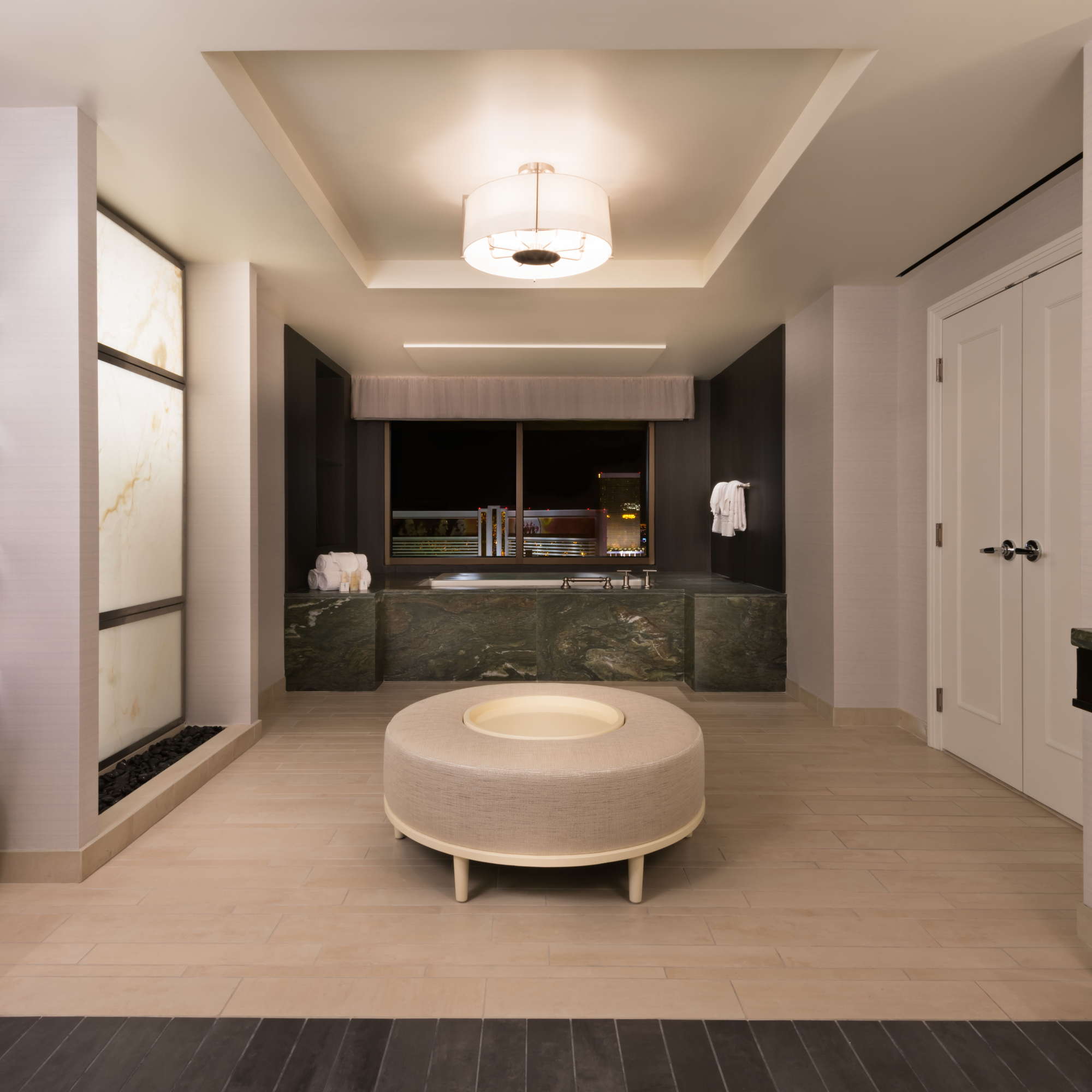 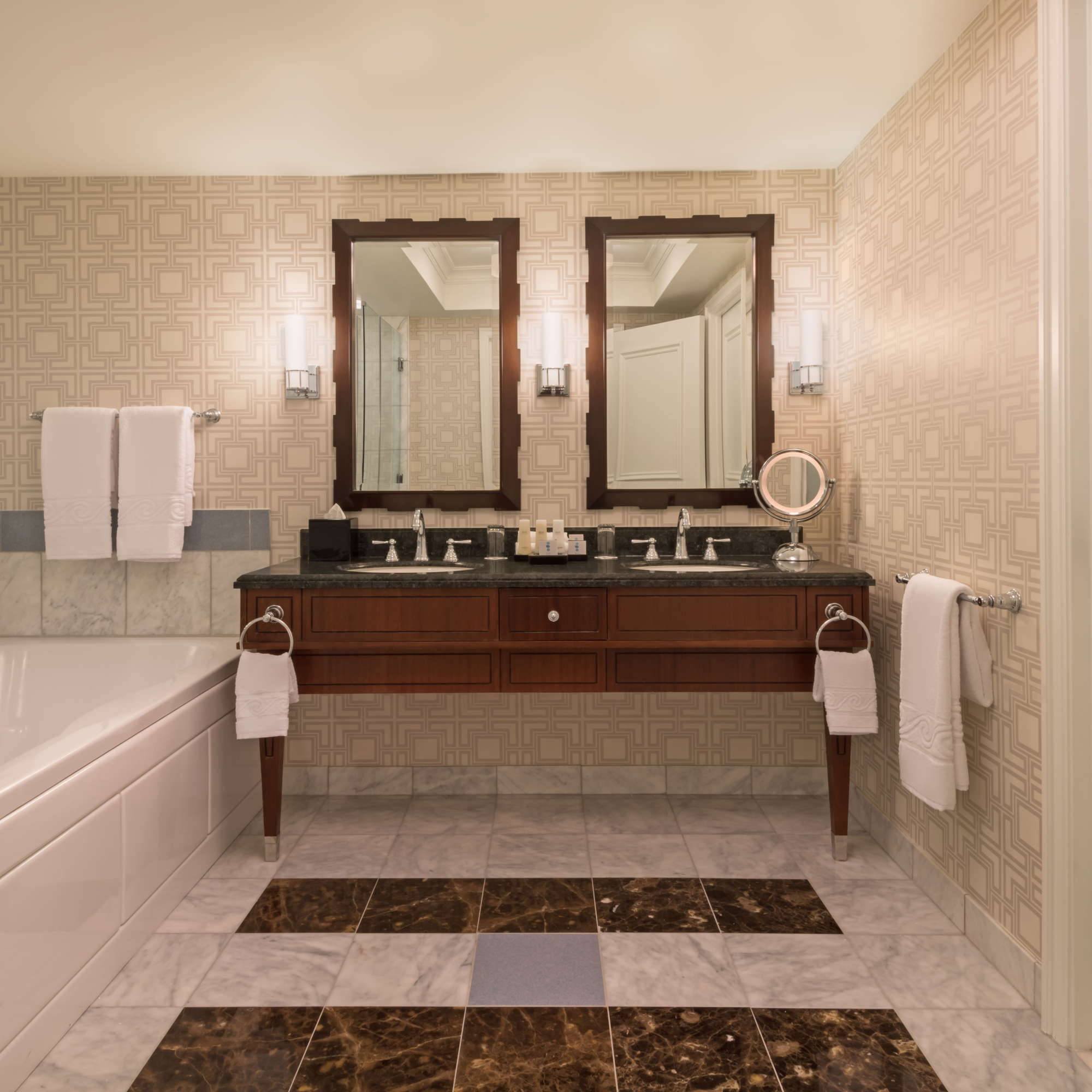 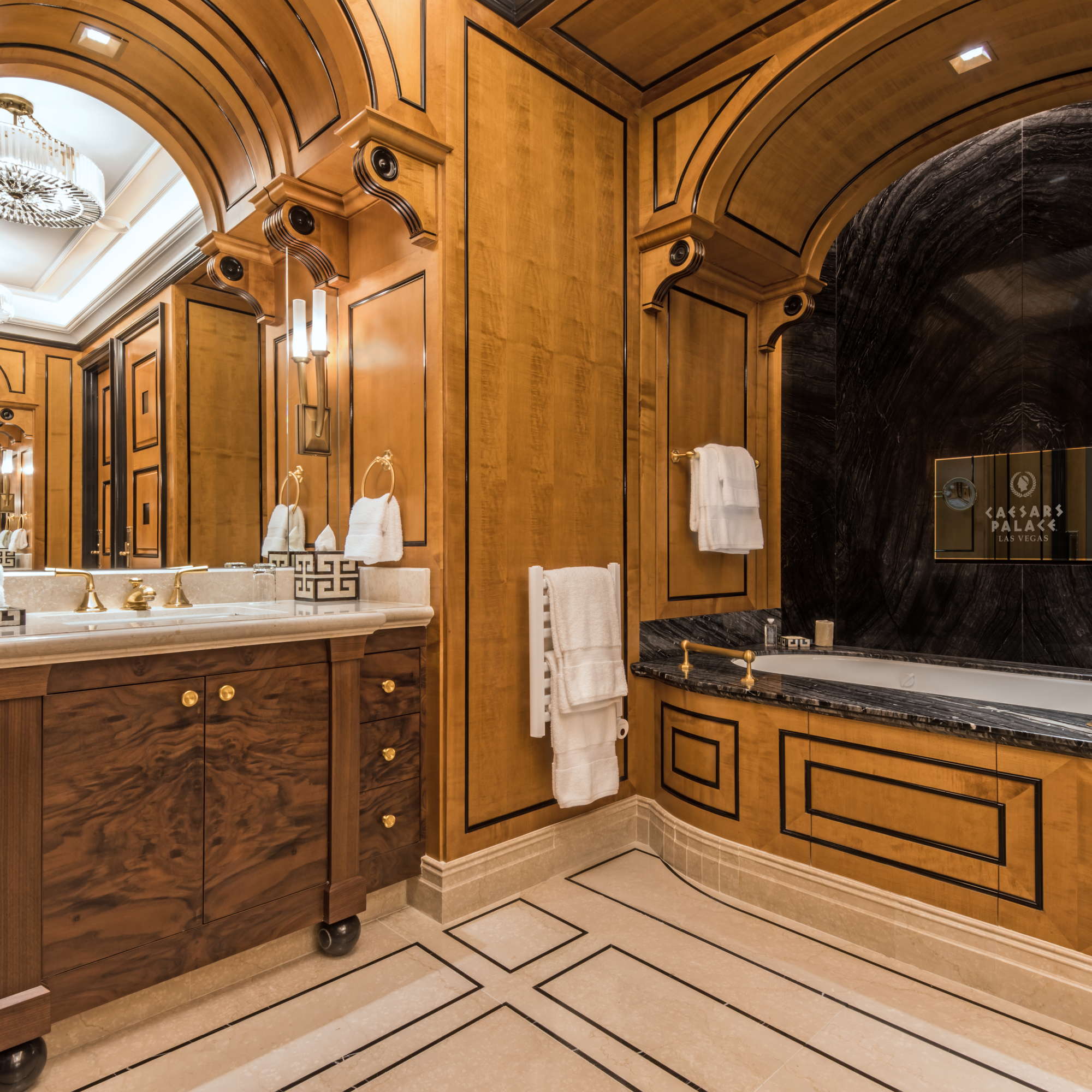 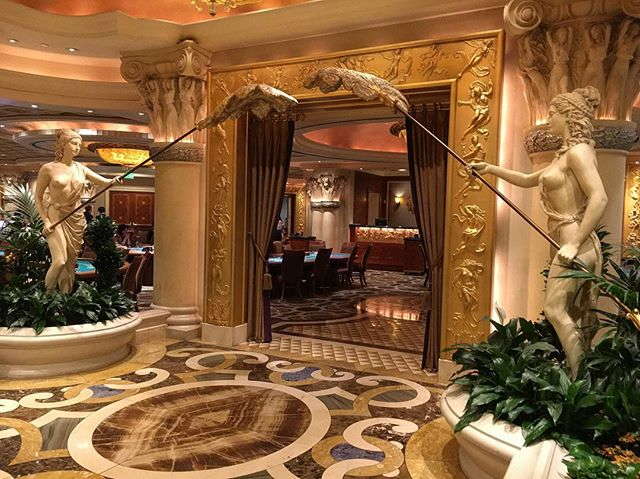 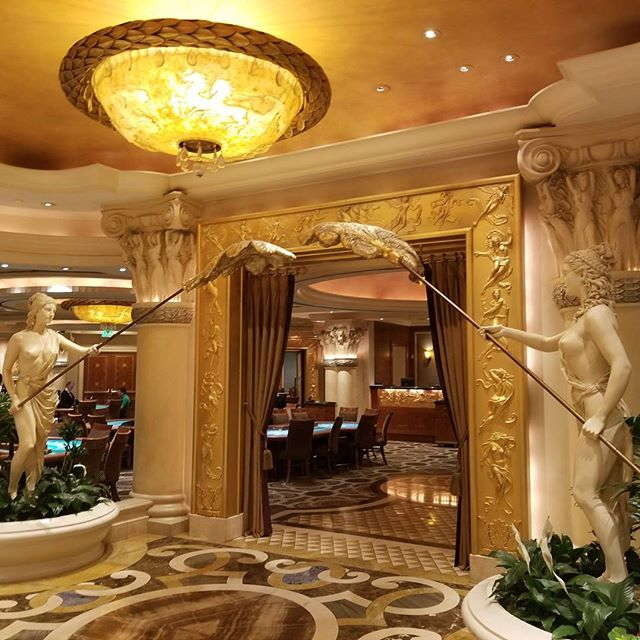 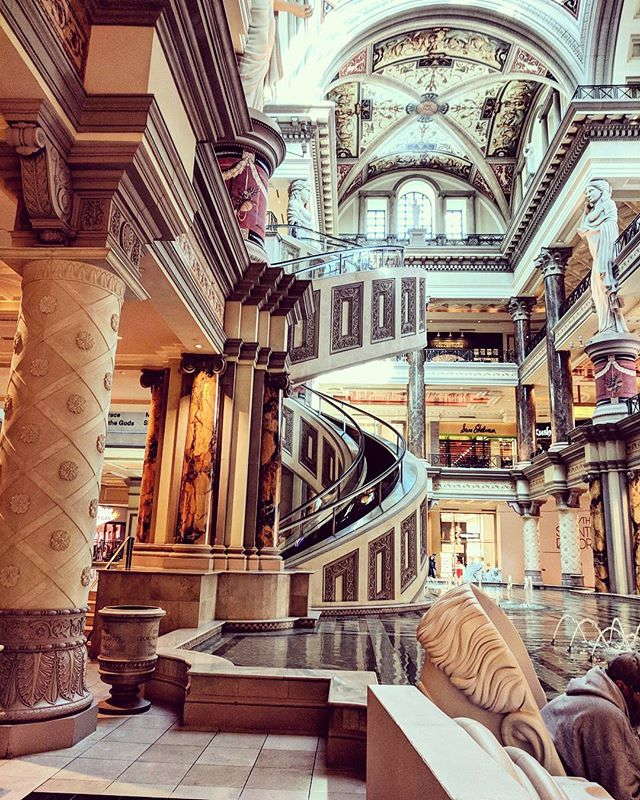 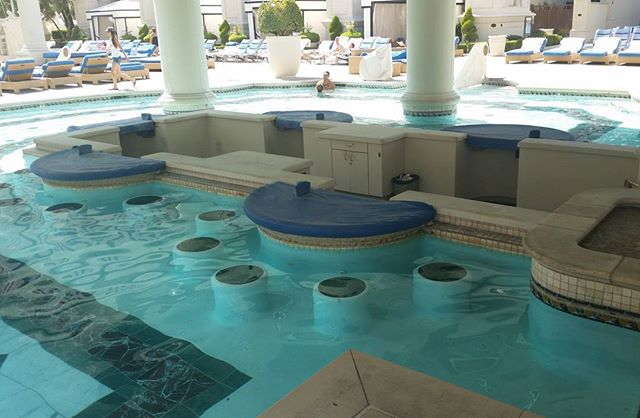 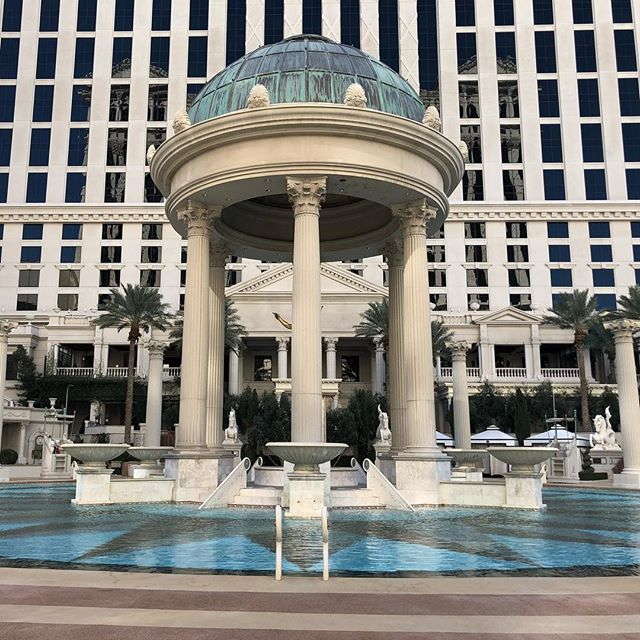 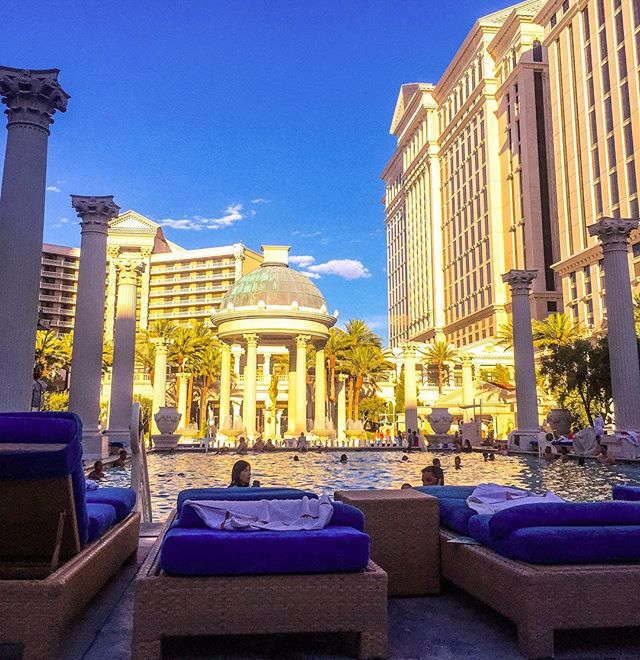 pool
Photo: Even though it was a scorching 115 degrees the entire time I was there, I found a little time to escape and enjoy the view. #lasvegas #caesarspalacepool #caesarspalace #poolside #worktrip #conclave2016 / @chic_niq_