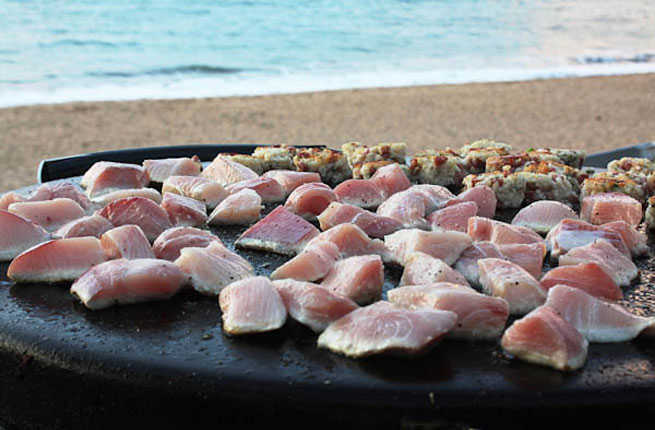 All that sun and surf can work up an appetite. While you’re in Hawaii, eat like a local. Full of diverse ethnic flavors and a distinct island vibe, Hawaiian cuisine is a multicultural experience with influences drawn from Chinese, Japanese, Korean, Filipino, and Portuguese immigrants. And, with a growing focus on locally sourced ingredients, you can feel good knowing that your meal wasn’t flown in from the mainland but grown nearby in rich, sun-drenched volcanic soil. Your Hawaiian vacation isn’t complete without a foray into these authentic island foods.

You are on an island, surrounded by sparkling blue waters as far as the eye can see. Seafood is an obvious choice, but one so delicious it is worth calling out. Explore the freshest catch of the day. The ubiquitous macadamia-encrusted mahi mahi abounds, but don’t shy away from unfamiliar local varieties like buttery ono or opakapaka. Or if you happen to be on the North Shore of Oahu, follow your nose to the shrimp">. 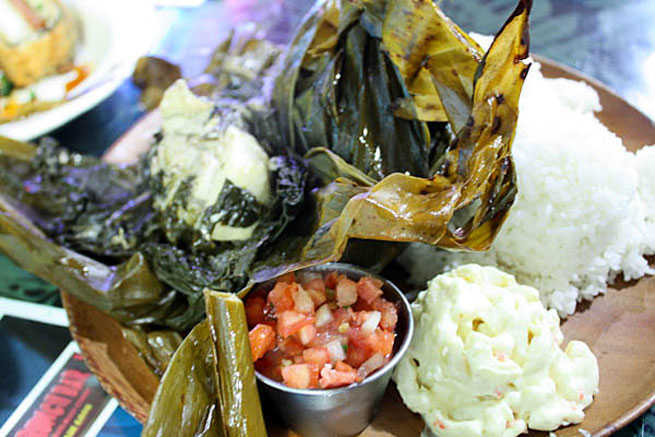 You can’t get more local than a plate lunch. Typically consisting of a main entrée, two scoops of rice, and a side of macaroni salad, plate lunches were traditionally sold to plantation workers and day laborers. Today, they are still a popular meal that’s economic and filling. Common entrées include dishes like loco moco, chicken katsu (breaded and fried chicken cutlet), laulau (pork wrapped in taro leaves), or shrimp. 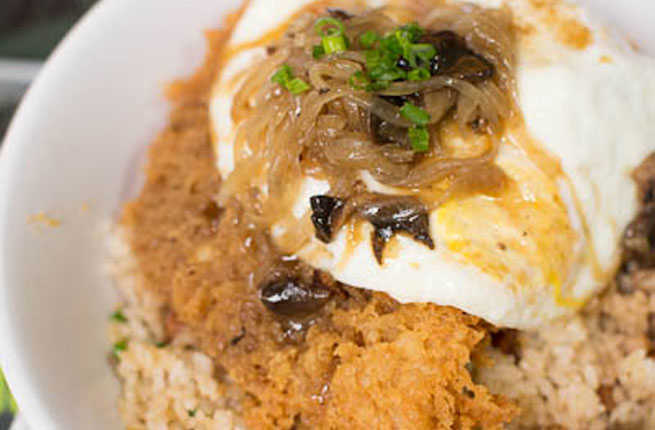 Perhaps one of the most popular Hawaiian dishes is the loco moco—a hamburger patty topped with a fried egg and brown gravy, served over rice. This is one stick-to-your-ribs kind of meal with a lot of fun variations. If you’re in Maui, any local can point you in the direction of Da">. Try the Polynesian Paralysis Moco, an extra big-boy portion of kalua pork, fish tempura, and two eggs over easy, smothered in grilled onions, mushrooms, and brown gravy. This hulking mass of sustenance sits on a mountain of fried rice studded with spam and scattered with an afterthought of something green in the form of chopped scallions. 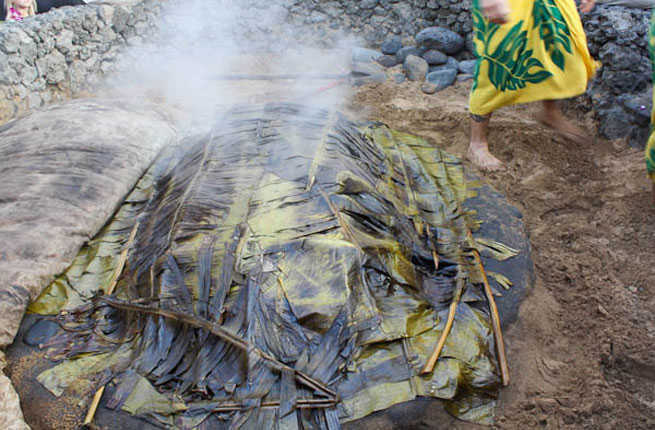 No visit to Hawaii is complete without a taste of kalua pig. Visions of luaus, hula skirts, and strapping fire-dancing warriors come to mind as you take a bite of tender, smoky pork, cooked in an imu, a traditional earth oven made by digging a large hole in the ground and dropping in hot stones. The whole pig is lowered into the pit and then covered with banana leaves to insulate the heat. 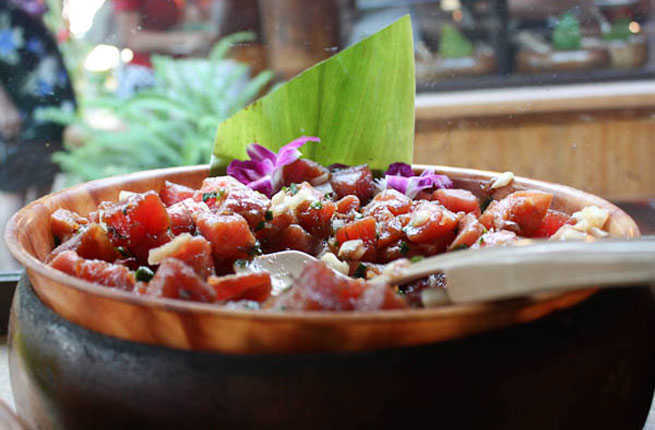 Pronounced po-kay this dish is like the Hawaiian version of sashimi or ceviche. Most commonly made with bite-sized pieces of raw tuna, salmon, or octopus, the seafood is typically marinated in shoyu and a touch of sesame oil, and mixed with some chili pepper, scallions, or ground kukui nuts. Some of the islands’ lighter fare, a beachside snack or lunch of fresh poke is sublime. 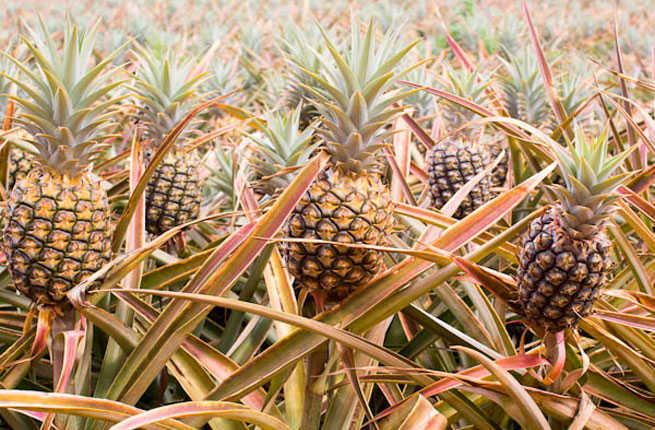 While in a tropical paradise, eat as much pineapple, papaya, coconut, guava, passion fruit, and/or bananas as you can get your hands on. Visit a pineapple"> and sink your teeth into a sweet pineapple hacked straight off the stalk. Target road side fruit stands for juicy, ripe papaya (pro tip: squeeze a bit of lime over it before devouring). Dig into mile-high banana cream pie. And don’t even try to resist those coconut umbrella drinks. 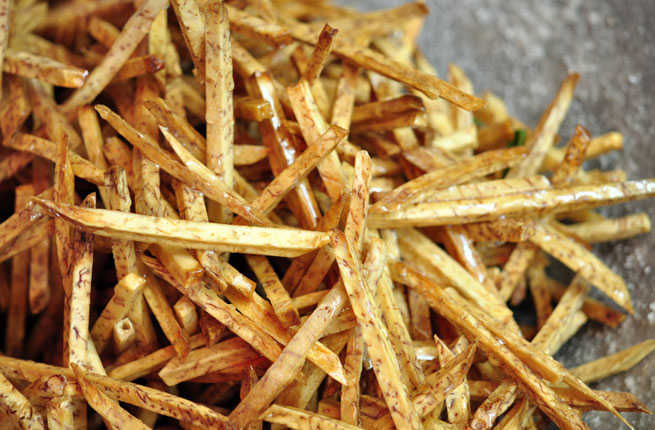 Taro root is a starchy staple in Hawaiian cuisine. Think of it as a potato substitute. For the adventurous, try poi, a traditional dish of mashed taro. For everyone else, taro chips are mighty tasty, and taro bread has a lovely sweetness to it. 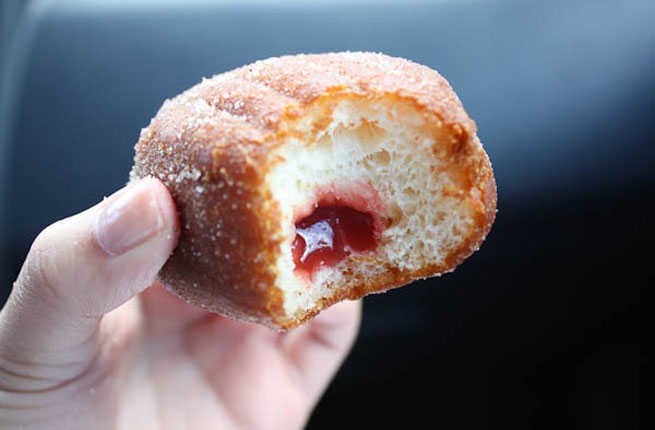 We can thank the influence of the Portuguese for the presence of malasadas in Hawaii. Malasadas are essentially a doughnut rolled in sugar…and sometimes stuffed with guava jam (if you’re lucky), or filled with white chocolate and dipped in caramel (if you are really lucky). Any which way, they are a treat worth looking out for. 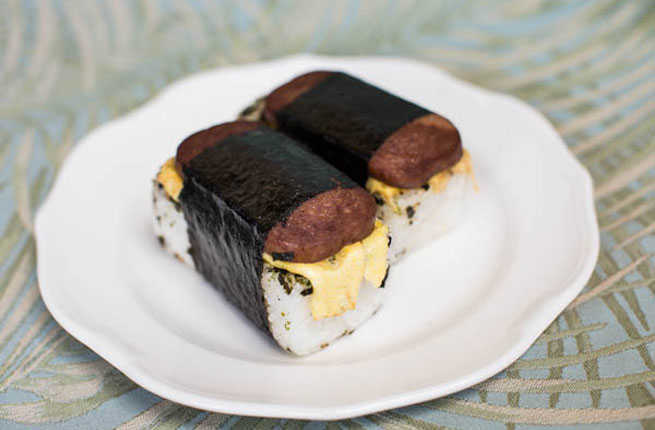 Spam has a beloved place in Hawaii. There is even an entire festival—one of the most popular annual events in Waikiki—dedicated to this canned meat product. So it would only make sense that this list wouldn’t be complete without mention of the classic Hawaiian snack: Spam Musubi. Comprised of fried Spam pressed over sushi rice and wrapped with seaweed into a neat little, hand-held burst of carbs and fatty meat energy, Spam musubis are an undeniable part of Hawaiian food culture. It’s what you see moms feeding their kiddies at the airport to tide them over; it’s what you see construction workers eating in the morning for an on-the-go breakfast (especially if there’s some egg wrapped in there too); it’s what you’ll find yourself reaching for when you’re at the general store or gas station, because when in Hawaii… 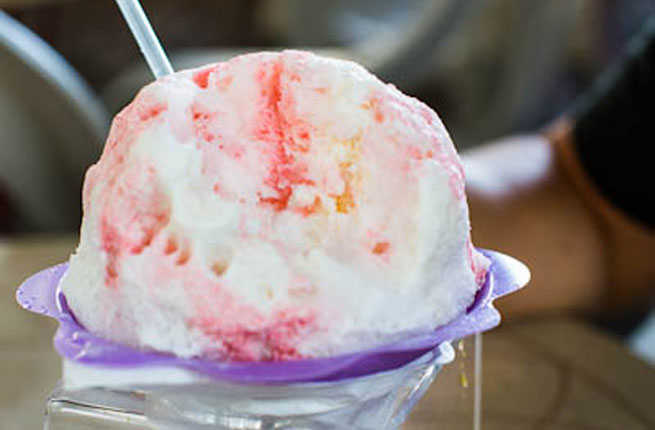 Shave ice is the ultimate cool treat on a hot, sunny day (which is basically every day). It is simply ice that has been shaved down and drizzled with syrup, but when done well, it is so much more than that. The best shave ice establishments manage to transform a block of frozen water into powdery soft, creamy, icy magic, flavored with joy. Don’t even compare it to a snow cone. Ululani's"> in Maui makes some of the best shave ice we’ve tasted. Try one with pineapple, coconut, and strawberry, topped with a signature "snow cap" (a sweet condensed milk and cream mixture), with a base of macadamia nut ice cream on the bottom. You’ll feel like a kid again on this sugar high.