Why kumquats, Cajun spices, and champagne are now being served with your fried chicken and collards.

It’s Easter Sunday. Children are running around in the backyard of a suburban Atlanta home. An egg hunt is in full swing. The kids’ parents are looking on from a social distance, but close enough to ask the person next to them what’s on the menu.

Guests weren’t quite expecting this lineup on the holiday menu. Baked chicken, mac and cheese, and potato salad, maybe; not this colorful spread. But just as the main advertising avenue for chefs has changed to Instagram, so too has their definition of what’s served at mealtime evolved.

“I’m here to make your tastebuds dance,” says Chef Pink, a California native who was seasoned in New Orleans. “I want [my food] to be an experience that you want to experience again. Everybody who eats my food is like, ‘Girl, what is this? What did you put in this?’” 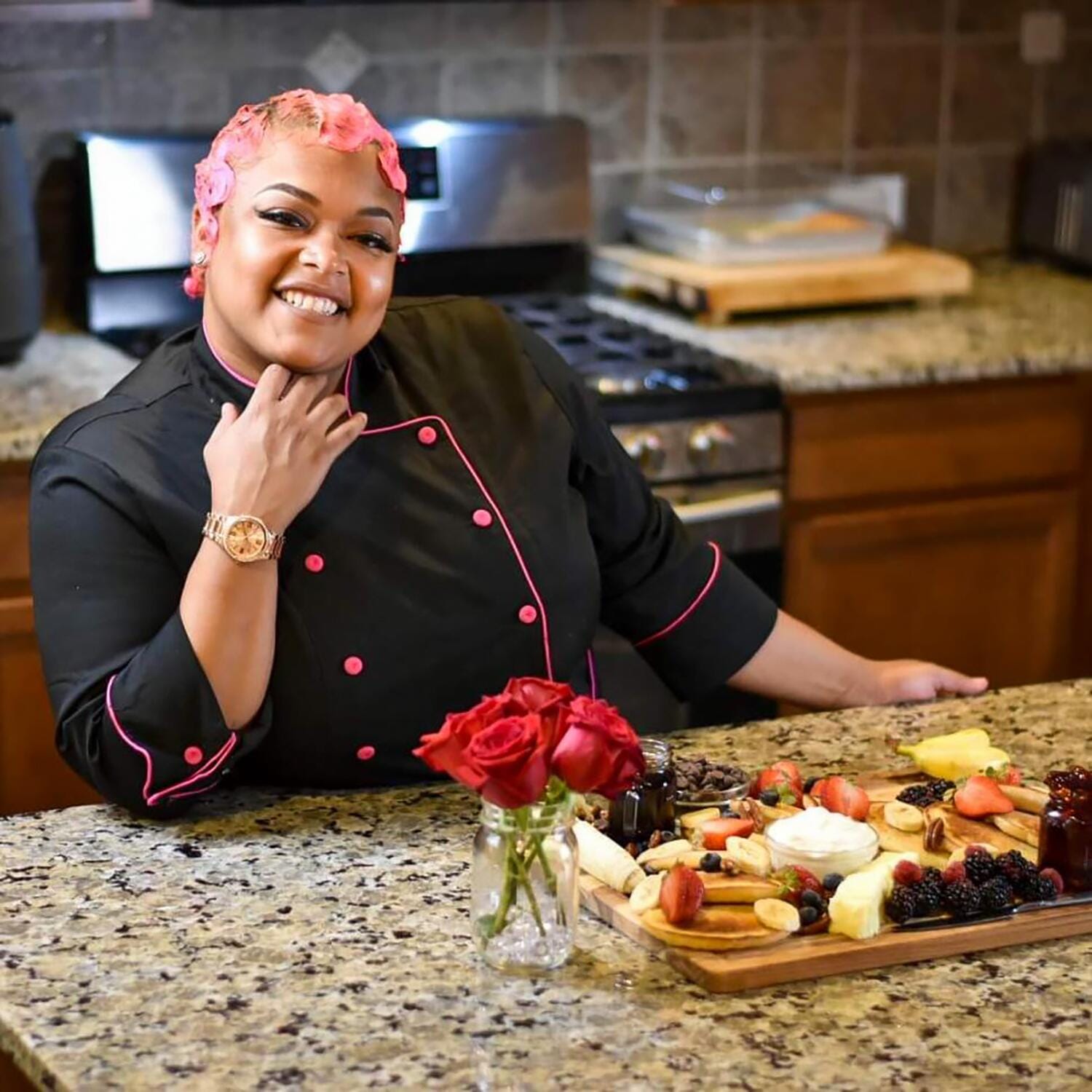 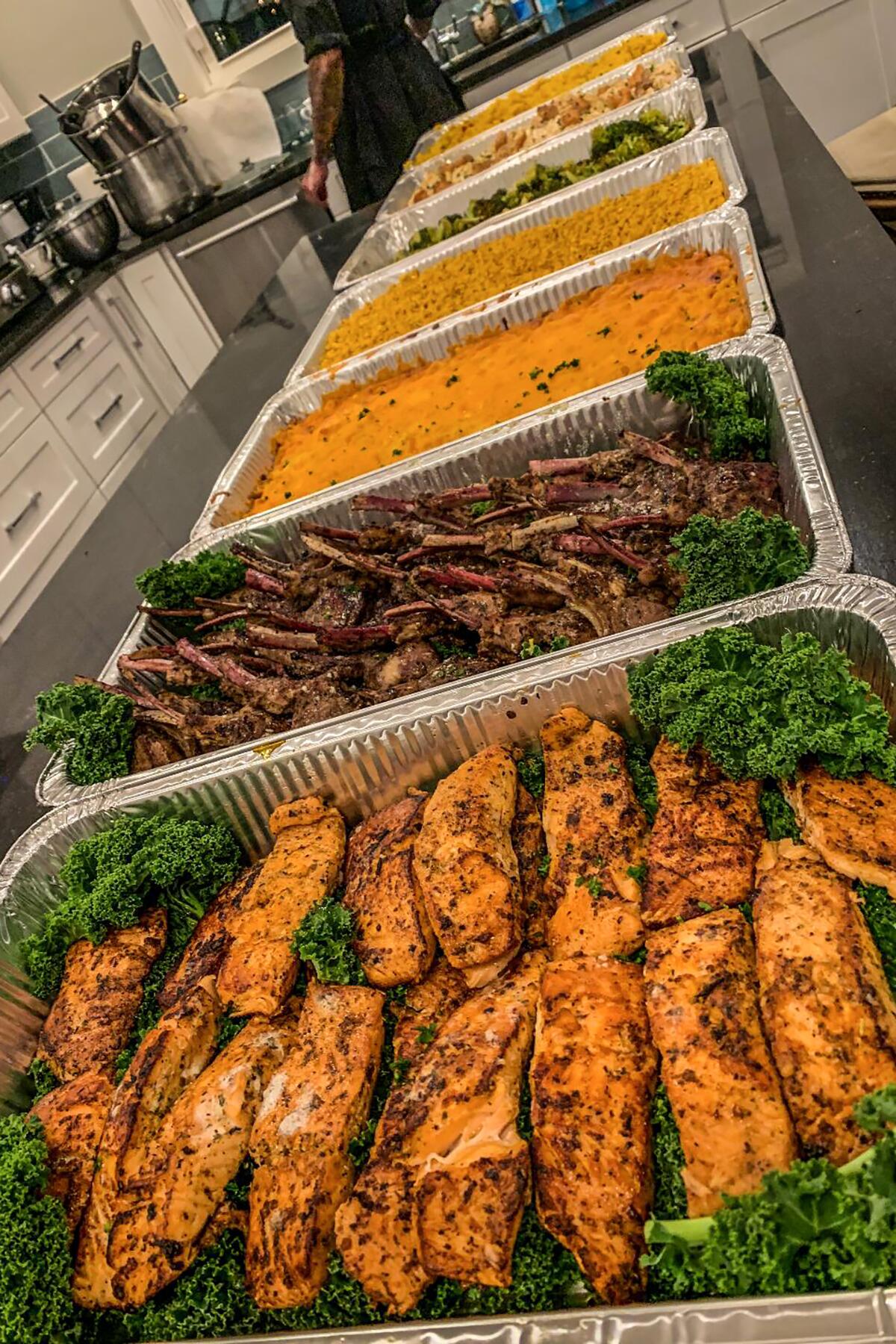 But it’s not just private chefs who are sprinkling fresh ways on their soul food. Atlanta-area restaurants are getting more sophisticated with their recipes as well. Almost any direction you look around town, you’ll find a toque taking a new approach with soul cuisine.

In the buzzy Westside, for instance, beloved chef Deborah VanTrece’s Twisted Soul Cookhouse & Pours has been creating magic at the stove since 2016. A former flight attendant, VanTrece traveled the world, sampling at local markets whenever she had an extended layover. All the global exposure might explain why her collard green rolls and cilantro grits taste so scrumptious.

“I think there’s an opportunity for us to open our eyes and see things a little differently with the food that’s been associated with African-American cooking,” says VanTrece, who released The Twisted Soul Cookbook: Modern Soul Food with Global Flavors in March 2021. “It’s time for our people to have a broader vision of what that food is. It’s a good time to receive it. People’s minds are open to a lot more than what they were.”

Chef VanTrece is stepping back from Twisted Soul’s everyday dealings in 2021, though, allowing the talented Robert Butts to take the helm as the restaurant’s executive chef. He’s already got some interesting things cooked up. “There’s a lamb of some sort coming on the menu,” says VanTrece. “I’m not sure where he’s going with it, but we’ll see what happens. He’s looking at asparagus. He’s looking at spring peas. Yesterday, we played with some recipes in the cookbook. We played with Coca-Cola and kumquat marmalade-glazed ham hocks.”

Chefs like Butts and VanTrece take ingredients seriously. They understand their historical significance. “Overall, the opinions of traditional soul food have been pretty negative,” says VanTrece. “I’d argue against it. I think we need to choose wisely what we’re going to ingest in our bodies and know where it’s coming from and how it got there. My philosophy is that I’m more concerned with where this food comes from. How many steroids [are in it]? How many hands touched it? How many hormones are in here? That’s what’s damaging us as a community—not [that it’s] a pork chop.”

In Tucker, just to the east of Atlanta, another chef is preparing spectacular dishes that aren’t only good for your physical health, but they prove filling for your soul, too. At FarmED, Chef Daryl Shular guides a team of at-risk cooking students from his Shular Institute through all aspects of running a restaurant, from making a gumbo gravy that drizzles over chicken breasts to anticipating when a patron needs a drink refill—all in a real-time dining setting.

The local community has eaten it all up since FarmED’s late-2020 debut. But we don’t know if the pleasant reception has more to do with Chef Shular’s mission of making a difference with the youth or the fact that his spotless dining room offers great food and delivers surprises like Motu Viget, a Black-owned sparkling wine, on the bar menu. 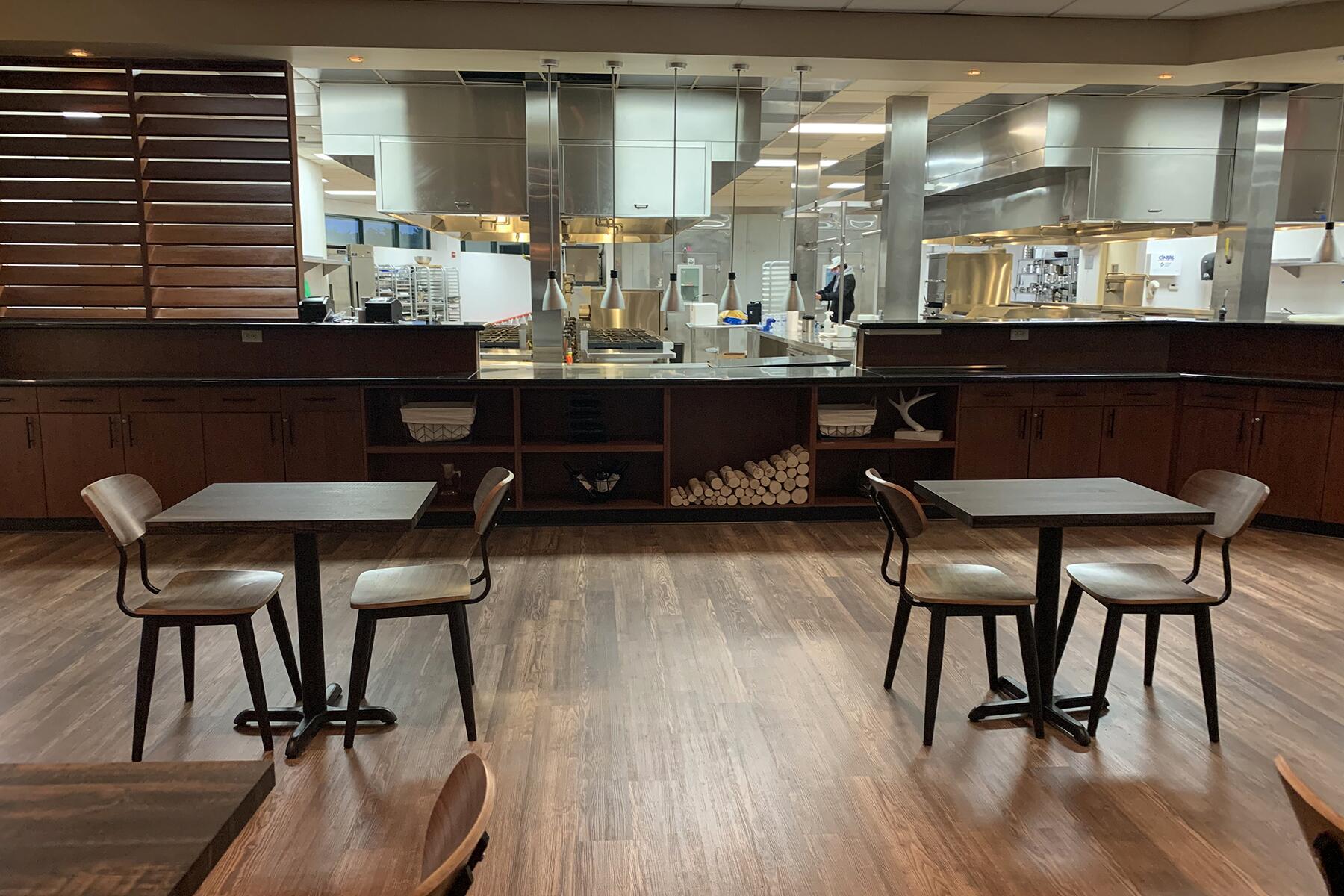 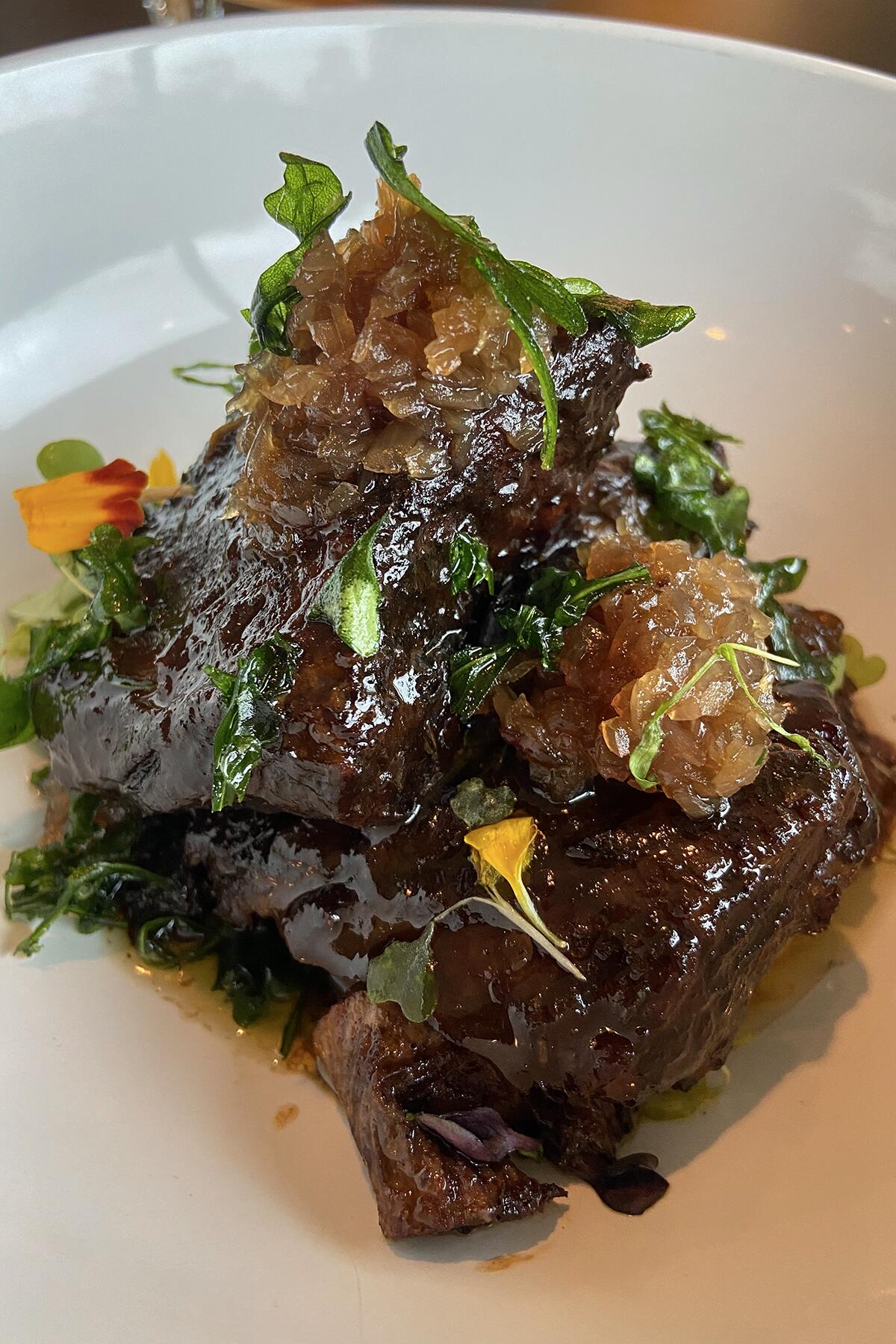 “The Atlanta food scene is constantly progressing,” says Chef Shular, one of just 72 Certified Master Chefs in the U.S., and the first African-American recipient. “When you think about some of these ‘food cities’ [around the country], they’re stuck in tradition. They don’t change. The recipe is what it is. Here in the South, we need elevation. We need innovation. We need people to evolve the cuisine. Our cuisine is not limited to macaroni, sweet potatoes, and greens. We need these chefs to think outside the box and expand the menu as if we came to this country as free ambassadors versus being slaves.”

“I think that the constant evolution of cuisine is exciting,” adds Chef Simone Byron, a former student of Chef Shular’s who’s blossomed into the executive director of the Hospitality Education Foundation of Georgia. “I think that elevation happens with what is going on in society. There’s a huge push for sustainability and seasonality, farm to table, getting things locally. It’s great to see chefs embrace those changes. Diets in general [are changing]. There are a lot of vegans and pescatarians. Chefs are making [dishes] that are more palatable for people who are choosing a different lifestyle.”

But that’s the joy of Atlanta’s dining scene these days. There’s enough room for an inspired destination such as FarmED to flourish less than seven miles from an East Atlanta staple like This Is it! BBQ & Seafood. Chef VanTrece’s Twisted Soul can comfortably sit just a short ride from dining institutions such as The Busy Bee Café or Paschal’s. All are fantastic in their own way. Only now, these newer spaces simply sprinkle rye whiskey over their roasted vegetables.

Soul: Food and Culture, the latest eatery from famed ATL chef Todd Richards, doesn’t have alcohol on its menu, yet the aroma from the catfish is still quite intoxicating. Opened in Atlanta’s Krog Street Market in February 2021, Soul replaced Richards’ Southern Fried, the inventive chef’s Nashville-style chicken restaurant. With a crispy chicken sandwich and collard waffles (yep, you read that right) highlighting the menu, the eatery finds joy in putting spins on the standards.

“We had this sea of sameness [in Atlanta],” says chef Richards, who’s planning a Spring opening for Kuro, a restaurant fusing Japanese tastes with traditional soul, with partner Josh Lee. “Everyone was doing shrimp and grits. Everyone was doing these classic soul and Southern dishes. No one was really stepping outside of a particular envelope. But now you have one of the best opportunities to see that there’s many varieties of food in Atlanta. Most of it is steeped in Southern and soul culture; it’s just that people are [now] allowed to have more freedom of expression.”

Recent ribbon cuttings speak to this freedom. Celebrity chef G. Garvin debuted LowCountry Steak in downtown Atlanta in late February. Chef Keith Kash opened Who’s Got Soul Southern Grill in Duluth in March. Don’t get us wrong, we still love stopping by down-home legends like K&K and Q-Time for a meat and two sides, but these new options have us excited for the future.

“I just bring something different to the table,” says Chef Pink, speaking for herself, sure, but echoing what many other Atlanta chefs feel about the moment. “What I bring nobody else does.”

From all the smiling faces seen around the Easter Sunday table, we’re inclined to say she’s right.