The marquee NYC event is another casualty of the COVID-19 pandemic. So, Macy's is bringing a bit of their balloon magic to Universal Studios.

Coronavirus has already halted annual parades in theme parks and towns around the world, but now it’s come for the big one: the Macy’s Thanksgiving Day Parade. The nearly 100-year-old event isn’t canceled, but it has been carefully reimagined as a TV-only special. There’s no route, no school bands, and no company of vested balloon handlers. Floats and balloons will still be featured on TV, but it won’t be the same. However, there is still a way to experience Macy’s balloons and floats in person. Universal Studios has a new attraction that places you closer than ever to these balloons—a lot closer than standing along 34th Street. Here are all of the magical details, plus everything you need to know about visiting Universal Orlando during the holidays this year.

Located in the New York area of Universal Studios theme park between Music Plaza and the Race Through New York Starring Jimmy Fallon ride, “Universal’s Holiday Experience Featuring Macy’s Balloons” will present seven super-sized parade balloons and five iconic floats in a brand-new interactive walkthrough exhibit. It’s part of Universal Orlando’s holiday celebration from November 14 through January 3. Like the rest of the current offerings throughout the resort’s parks, social distancing will be enforced along the indoor path. The new attraction is included in regular theme park admission and an advanced reservation is not needed, but Universal has acknowledged that there may be times when a virtual queue via the Universal Orlando app will be used to manage distancing. While you can’t get close to other people, you can definitely get close to the balloons, from classic staples such as the Nutcracker to popular characters from Illuminations and DreamWorks to the iconic Macy’s logo star. Kids (and kids at heart) can take selfies with balloon Minions, balloon Gingy from Shrek, and balloon penguins from Madagascar. 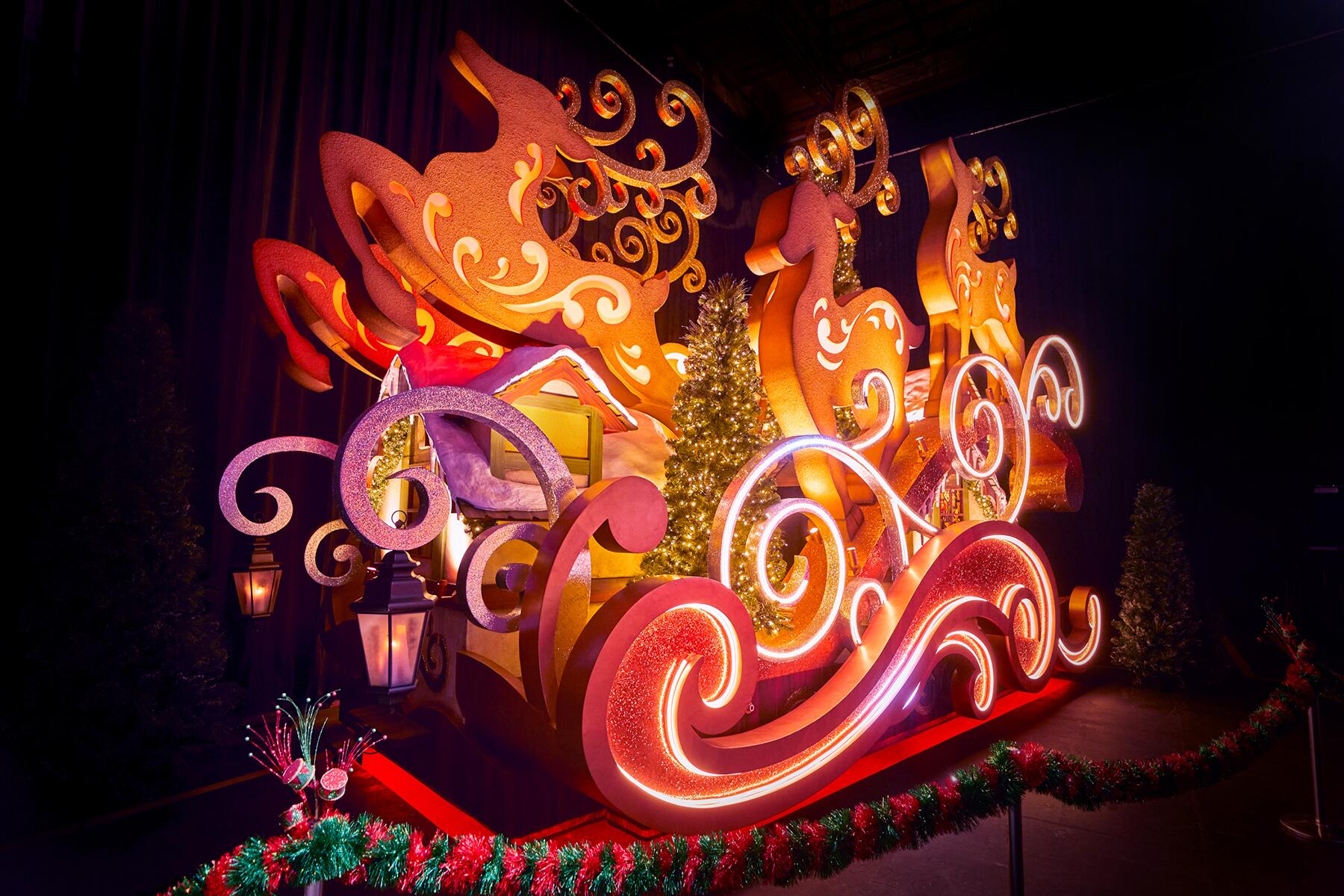 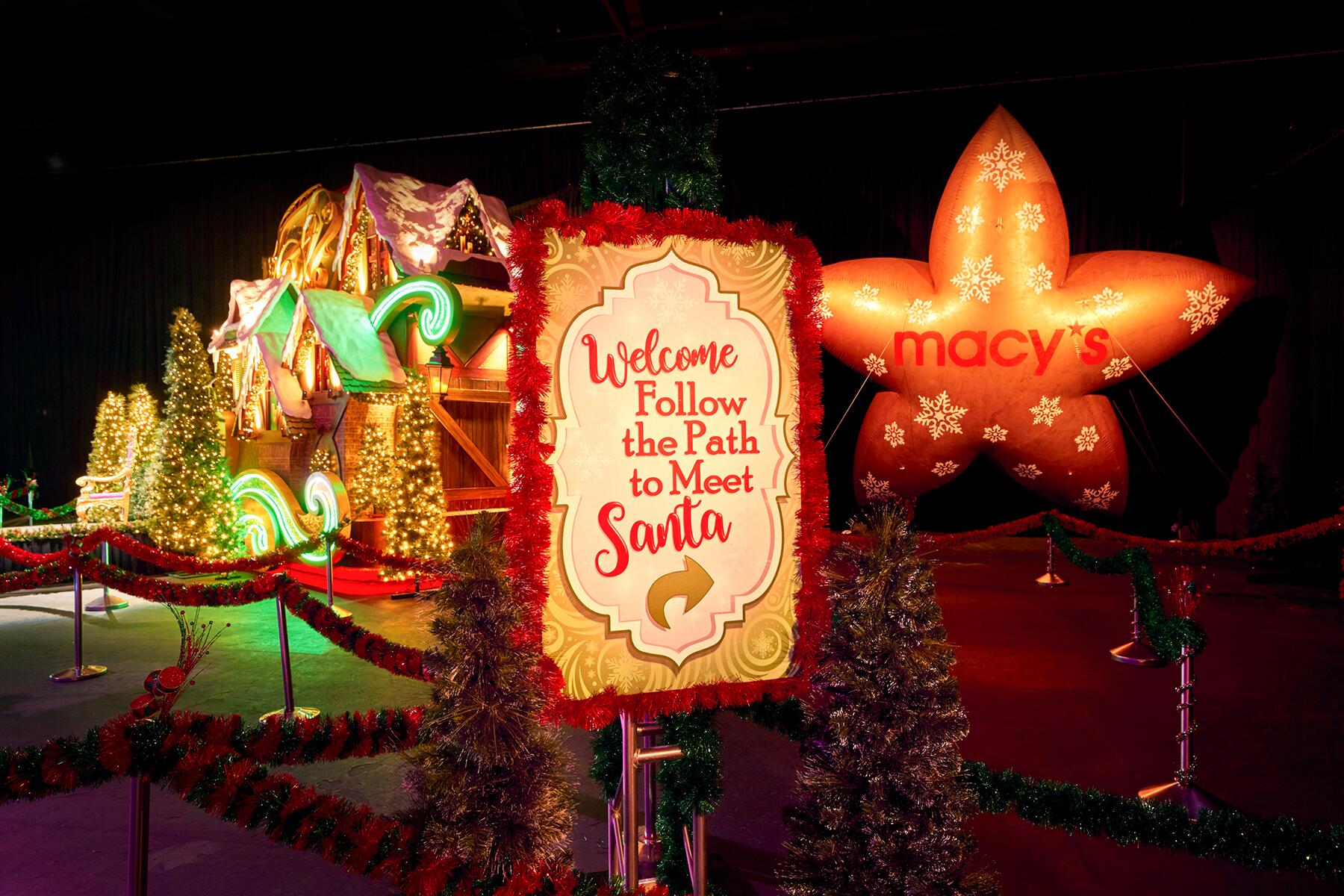 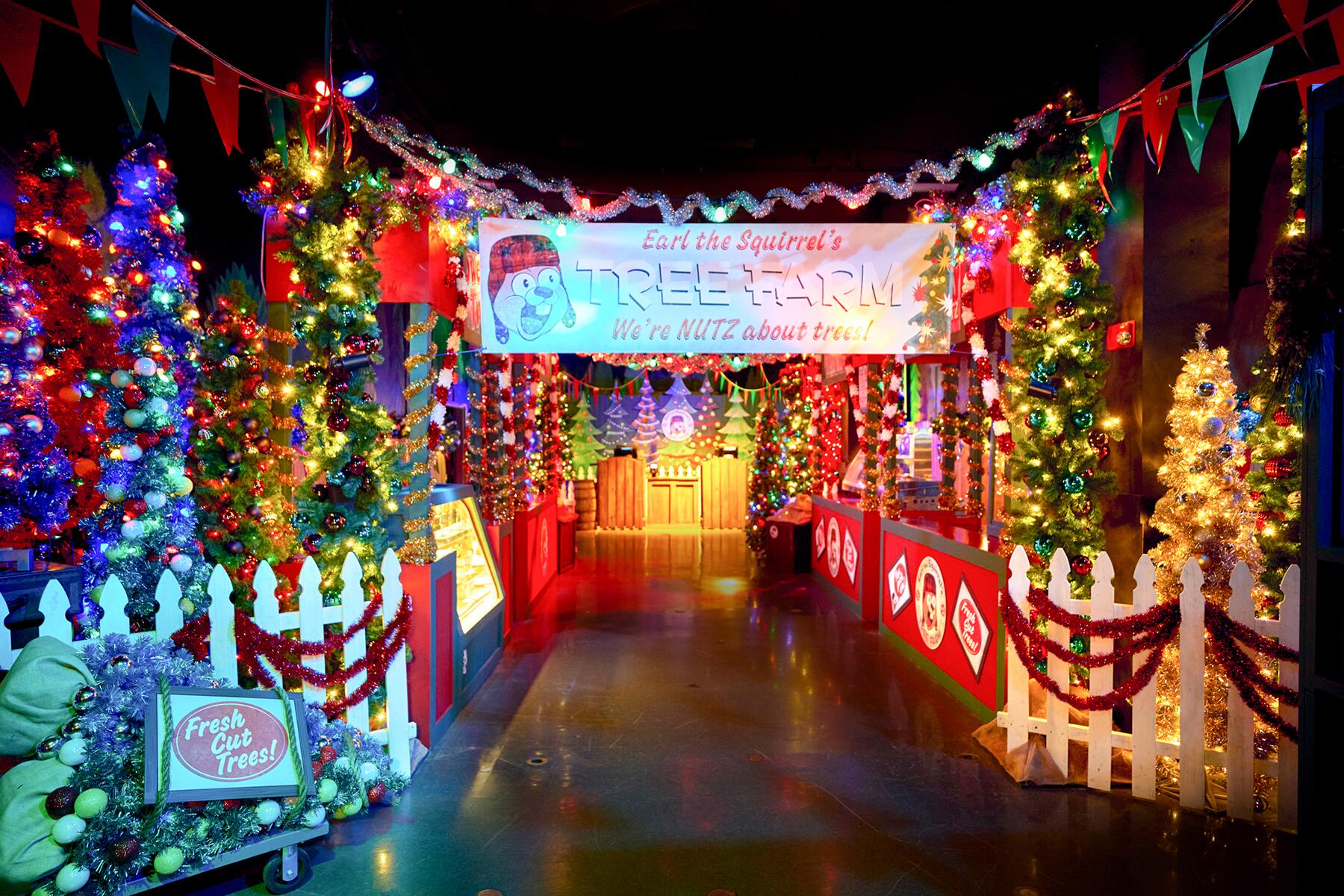 This isn’t the first time that Macy’s has shared their magic with Universal Orlando. In years past, guests could experience a condensed version of the Macy’s parade during the holiday season right down the streets of “New York City” in Universal Studios. No spoilers if you’ve never seen this spin-off parade, but it’s just as magical as the original in Manhattan. And while this won’t be happening in the park this year, Universal and Macy’s have modified the magic with “show moments” on a handful of parade floats. These vignettes will feature loveable characters such as King Julien from Madagascar and will offer guests a chance to take socially-distanced selfies with the characters in front of the floats. It’s definitely not the razzle-dazzle of a normal parade, but there is a silver lining for seeing it up close. And it kind of feels like a cool behind-the-scenes premium, because when have you ever been able to stop parade traffic to take a photo in front of a float? Now you have tons of time to take all the photos.

And, yes, just like the actual Macy’s Thanksgiving Day Parade or Universal’s inspired-by version in years past, the whole experience still culminates with the big man himself. Guests will be able to see Santa Claus from a platform inside the attraction. And Santa will be available for socially-distanced photos and greetings.

Santa is a big deal, but he’s definitely not the star of the holiday season in these parks. Because, at Universal, it’s all about Mr. Grinch. When there’s not a pandemic, Seuss Landing in Universal’s Islands of Adventure is a Christmas must-do. The Whos of Whoville deck the halls, there’s a musical retelling of The Grinch, and you can even meet with the green, mean one himself dressed up as Santa, though it’s more like getting comically roasted rather than a jolly greeting. It’s what makes Universal’s Christmas so different from other theme parks. It’s fun and cute, but there’s also a bit of edgy sarcasm and snark. While the musical has been canceled, the whimsical decorations will be up and the Grinch will still make surprise appearances—at a distance—in the landing. 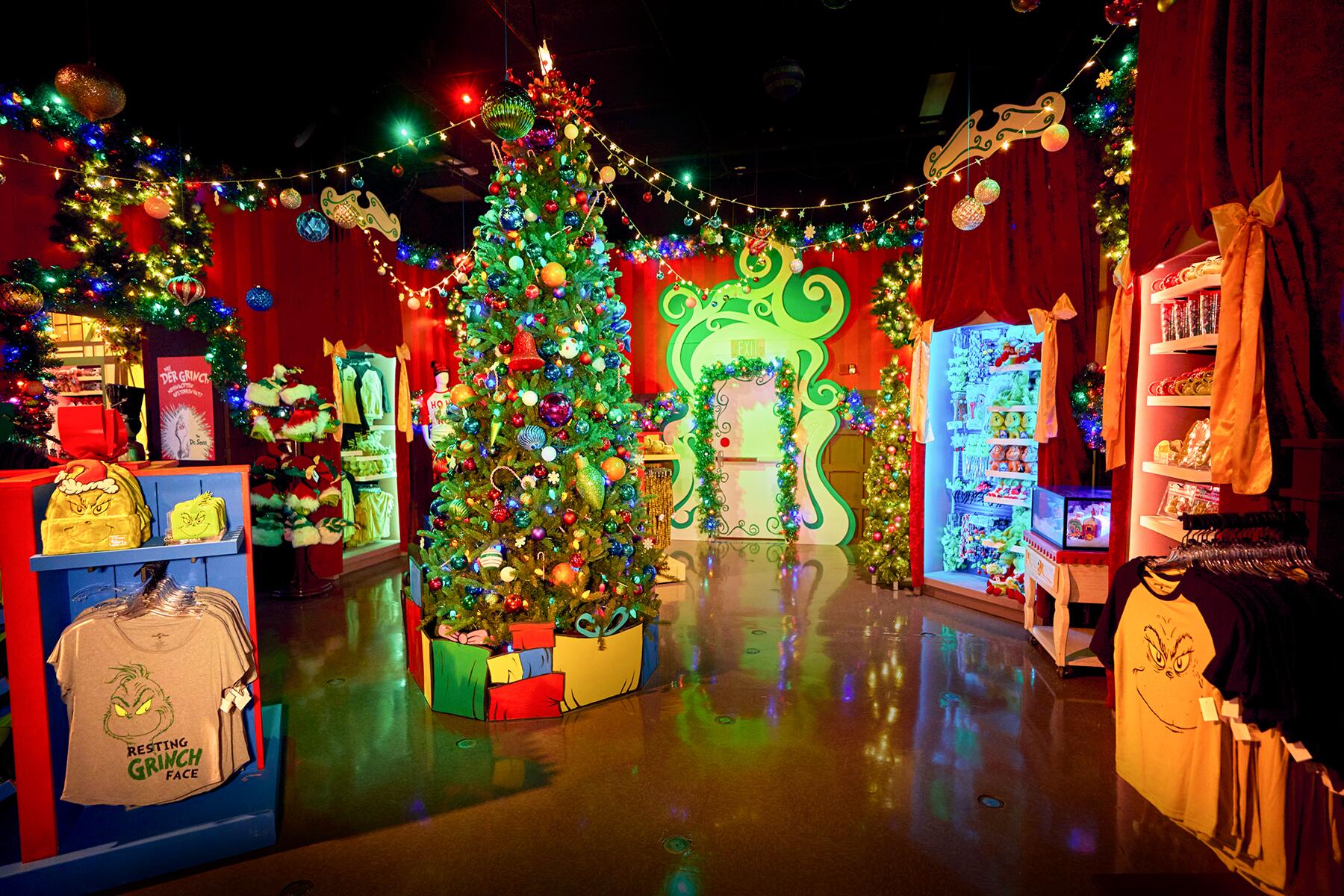 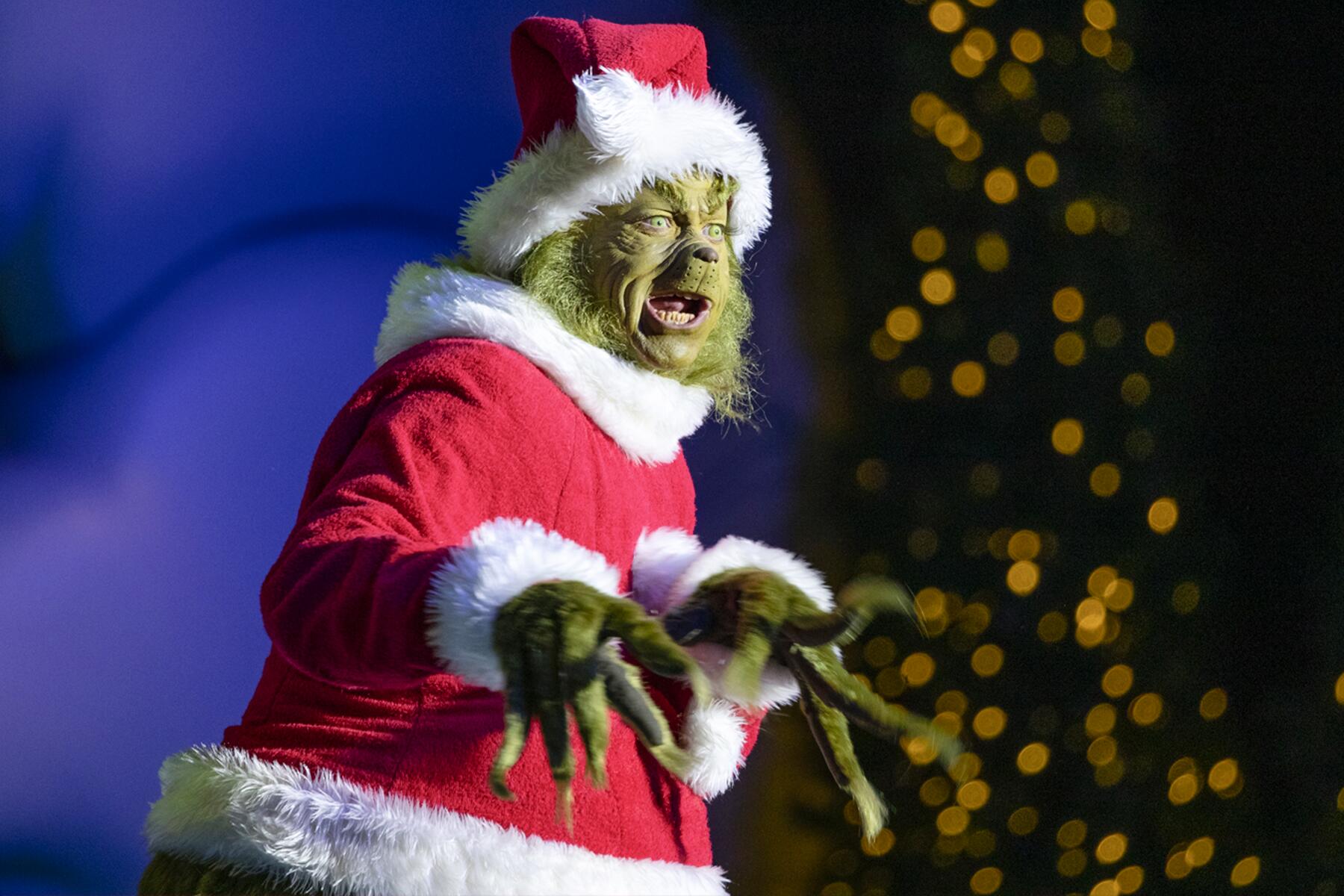 The Wizarding World of Harry Potter will still feature the same Christmas decor in both parks, from the snow-wizard in Hogsmeade to the magical-themed garlands and wreaths in Diagon Alley. And at a time when theme parks around the world have laid off or furloughed thousands of musical casts, dancers, tech crews, and performers, the singing witches and wizards at Universal still have a gig. The popular Hogwarts Frog Choir will still perform in Hogsmeade. They sing iconic muggle Christmas tunes as well as some not-so-familiar songs from the wizarding world. And over in Diagon Alley, Celestina Warbeck, the witchy pop icon, is back with a special holiday performance.

These mini-shows are in open areas where it’s easier to socially distance. That can’t be said, however, for “The Magic of Christmas at Hogwarts Castle.” The projection-map show wraps Hogwarts Castle with digital singing ghosts and tons of nostalgia from the series. It’s the right decision for Universal as this area of Hogsmeade can bottleneck and gridlock during showtimes. (However, if you’re willing to pony up an additional $60 per person, you can schedule a semi-private, socially-distanced viewing of the show on select nights with a VIP tour.) The silver lining is that hot Butterbeer is officially back on the menu! This seasonal variation of the original chilled Butterbeer is only around for a handful of months in Orlando when the temps warrant it. In my opinion (and I’d consider myself an expert as I’ve tried every medium of Butterbeer, from fudge to soft-serve), it’s the best version of this treat. 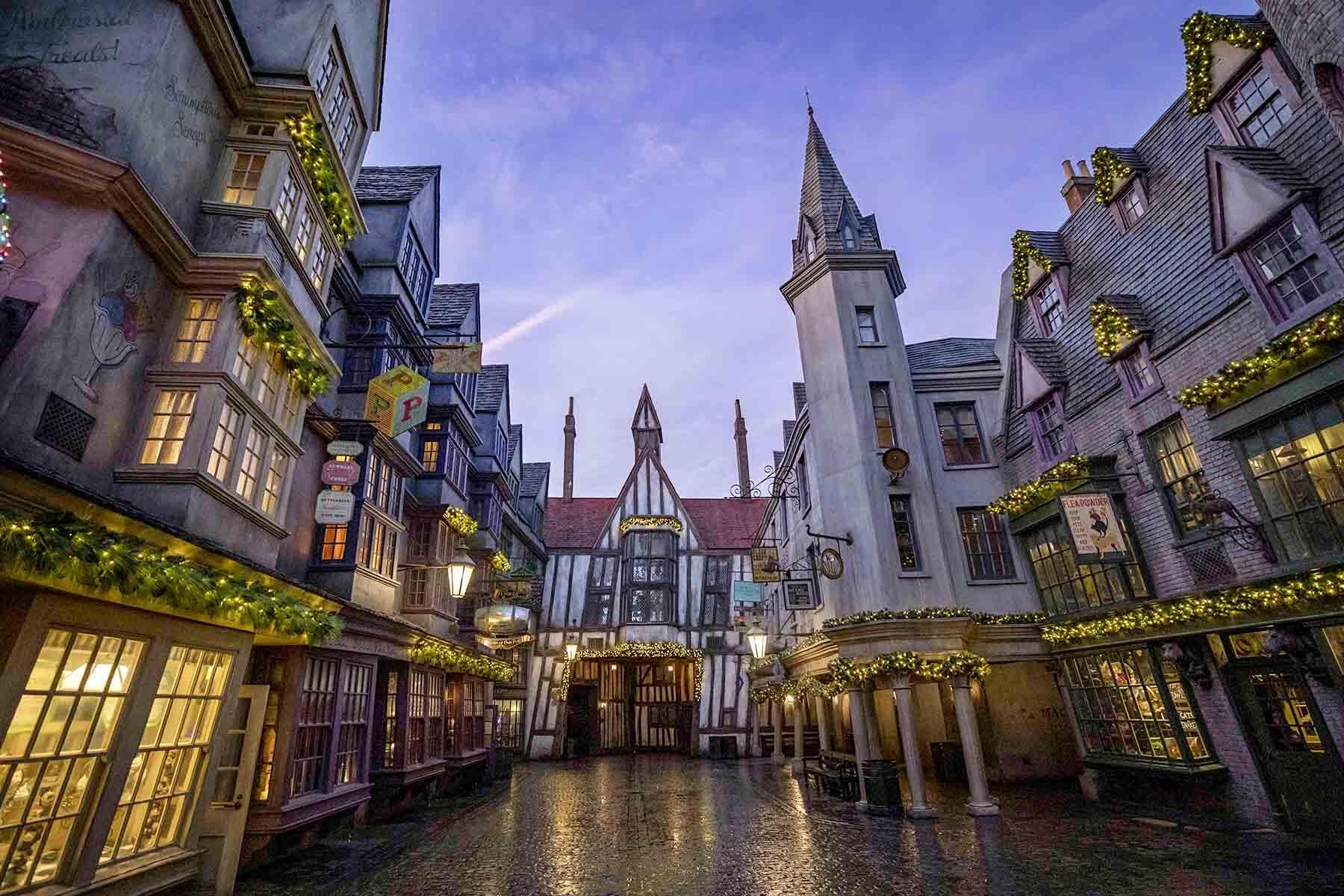 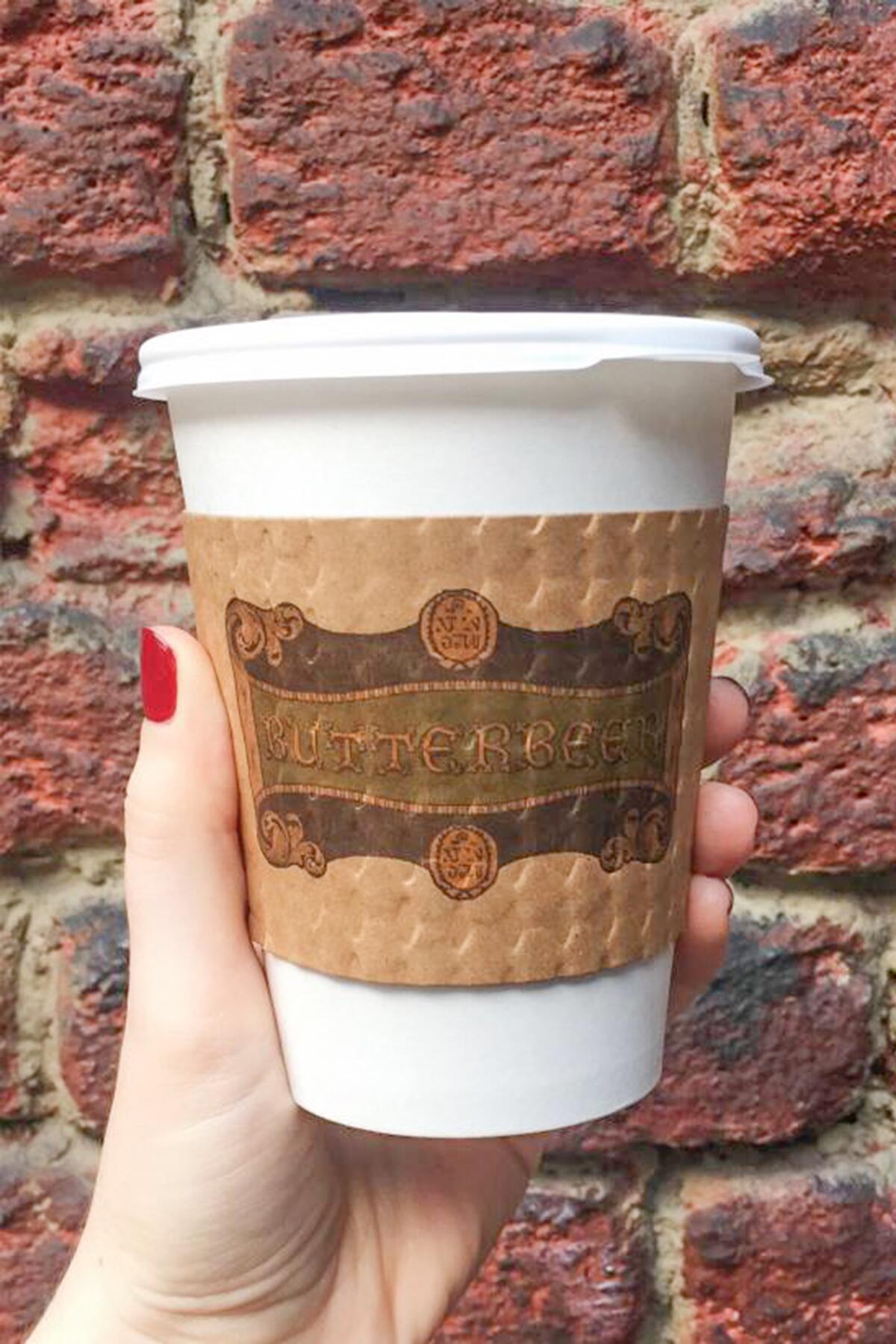 1. The Wizarding World of Harry Potter lit up for the holidays.Universal Orlando; 2. Hot butter beer is the seasonal treat you won’t want to miss.Deanne Revel.

In addition to the return of hot Butterbeer, there are more than 20 new eats, treats, and sips debuting for the holiday season across both theme parks. There’s something for everyone, from vegan reindeer brownies to jumbo gummies shaped like retro Christmas lights to a hot chocolate bomb (which sounds like a college drink but is actually really cute) where a white chocolate ornament melts away to reveal a flurry of marshmallows. And if you need to take a break from the sweets, there’s a Thanksgiving dinner crepe. This over-the-top mashup features an entire traditional meal jammed into a portable cone with turkey, gravy, cranberries, stuffing, and even cornbread croutons.

And, if you collect ornaments from each trip, there’s tons of new holiday merch, and shopping for it will be even more exciting as the Tribute Store in Universal Studios has turned into a winter wonderland. The high-level, immersive styling is like an Instagrammable pop-up venue with four themed rooms. It’s been done before for Universal’s Halloween Horror Nights, but this is the first time that the Tribute Store has been transformed into a holiday shop. If you do visit Universal this season, consider donating to Second Harvest Food Bank of Central Florida in lieu of an extra souvenir. The organization is helping Team Members (Universal lingo for park employees) who have been laid off or furloughed due to the pandemic. Most of the headlines have been about Disney layoffs this year, but Universal was hit hard, too.