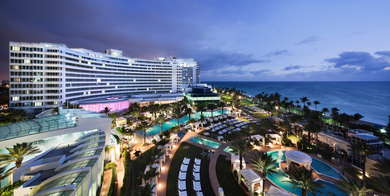 Vegas meets art deco at this colossal classic, deemed Miami's biggest hotel after its $1 billion reinvention, which spawned more than 1,500 rooms (split among 658 suites in two new all-suite towers and 846 rooms in the two original buildings), 12 renowned restaurants and lounges, LIV nightclub, several sumptuous pools with cabana islands, a state-of-the-art fitness center, and a 40,000-square-foot spa. There's so much going on in and around the hotel that you can easily forget about the downy sands directly behind the property. And much like a cruise ship, there's plenty to do for party-ready adults and restless kids and teens alike. The property teems with new amenities, but thankfully everything is not new: two Morris Lapidus–designed, landmarked exteriors and lobbies were restored to their original state. Rooms, however, were completely gutted, down to the beams, and given new, contemporary designs. This is a complex of historic proportions that's made Mid-Beach rival South Beach as Florida's most trendsetting neighborhood. Having a handful of the Magic City's top restaurants in-house sure doesn't hurt. At night, those of drinking age who are tired of waiting to get into LIV nightclub, get their drink on in the Lobby Lounge.

YOU SHOULD KNOW On weekends and holidays, the Fontainebleau is a hotbed of loud -- and rowdy -- activity. The restaurants and nightclubs also mean that people other than hotel guests are in the lobby at all hours of the day and night -- especially during concert events, New Year's Eve, and during the annual South Beach Wine & Food Festival.

Whether a city or ocean view, rooms are tastefully decorated in whites and neutral tones. WiFi, mini bar, and a writing area are nice touches. Pets are welcome, and even have their own dedicated movies to watch.

If you want to channel your inner Frank Sinatra, ask for a room in the original building. 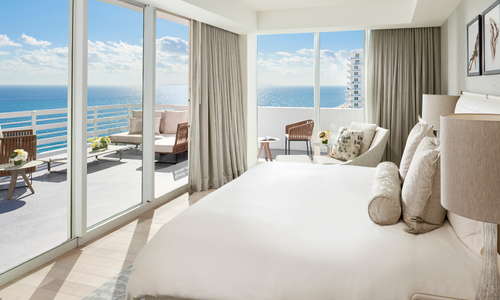 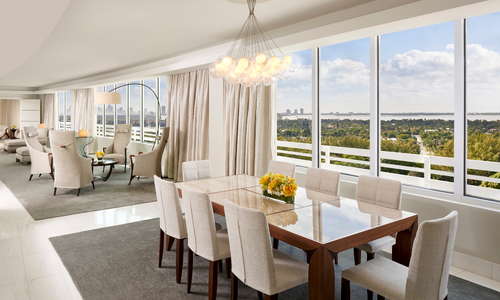 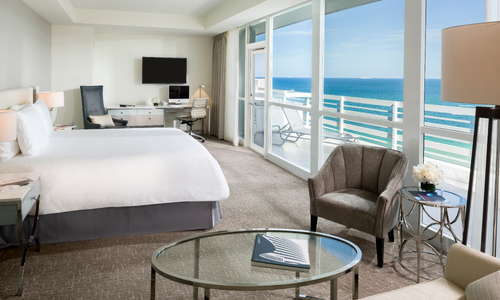 Frank Sinatra, Dean Martin, and Sammy Davis, Jr. once called the Fontainebleau their playground. Want proof? A gallery of pictures from that era are on display in the lobby. The Bleau Bar is a hub of nearly continuous activity at this mega-watt resort.

Though the resort has gone through may renovations and upgrades, the main lobby area still holes much of its original charm. It's not too difficult to imagine celebrities from the 1950's waltzing down the lobby's main staircase, martini in hand. 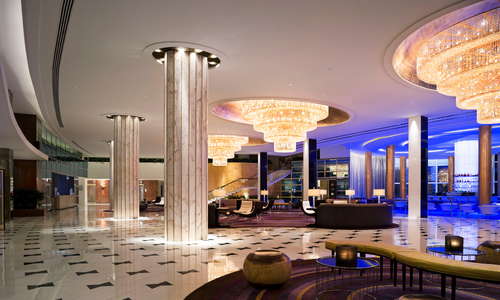 The Fontainebleau's main pool is nearly as big as a small lake - complete with islands with private cabanas. DJ's play sets around the pools and on weekends it can be a mix of kids, bachelorette parties, and honeymooners. The pool area also serves as a concert venue during New Year's Eve and other special times of the year. Several smaller pools cater to families or more intimate experiences. 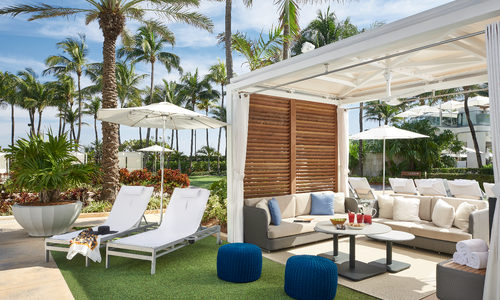 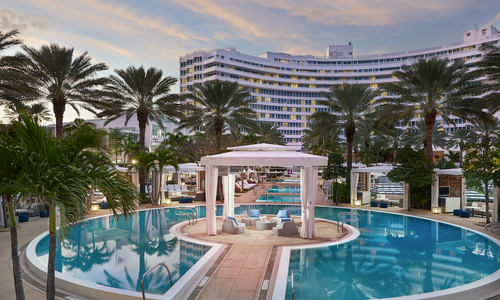 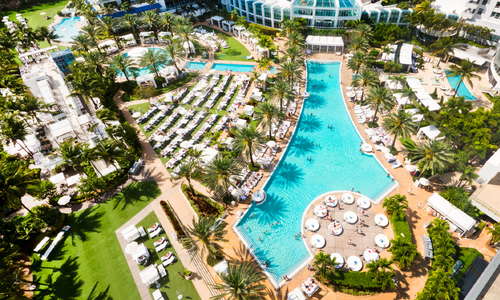 Domestic Diva called the Lapis Spa the most beautiful in America. Services include massage, facials, mineral pools, and steam rooms. Light snacks, beverages, and robes are provided to guests.

YOU SHOULD KNOW The Lapis spa is a cell-phone, photo, and alcohol-free zone. 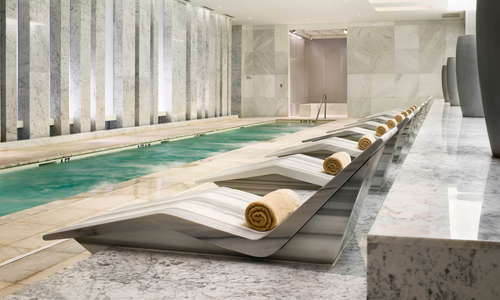 The gym offers the services of a personal trainer, for a fee.

The Fontainebleau Miami Beach houses a massive bakery and candy shop, where all items are made in house. Additionally, the resort has its own fishing boat to insure fresh daily seafood. 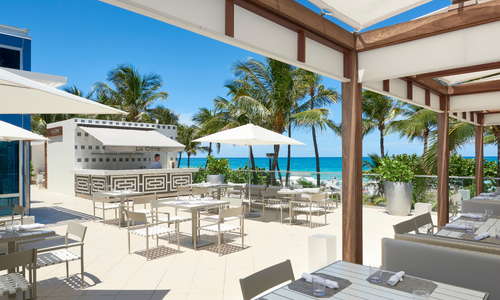 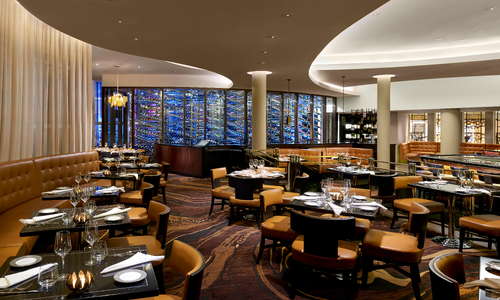 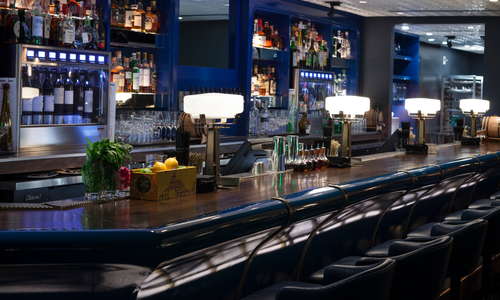 The Bleau Bar is the heartbeat of the hotel and the main gathering place. LIV is the resort's high energy nightclub where top-of-the-line DJ's play sets while Kardashians party behind velvet ropes. The BleauLive concert series attracts names like Lady Gaga and Pitbull to the stage. 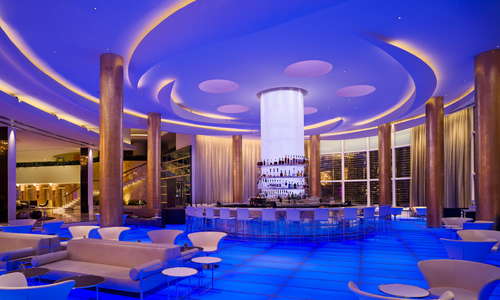 Valet parking at the hotel takes time and money. The best way to get around is by taxi or Uber.

The Forge is a classic Miami Beach steakhouse that features a wall where guests can fill their glasses with an extensive array of exclusive wines. Celebrity chef Nobu Matsuhisa's largest restaurant, Nobu Miami, is a quick five-minute walk, serving exquisite (and expensive) sushi.

The Broken Shaker (10-minute drive) is an outdoor bar constantly rated one of the world's best by various magazines. Wunderbar (10-minute walk) offers classic cocktails in a hidden, speakeasy setting.

The Fontainebleau is a glitzy, glamorous hotel that ties together its lush heritage, yet clearly steps boldly into the future. Its ties to music -- first Elvis and Frank Sinatra, now Lady Gaga and Justin Bieber -- are undeniable. 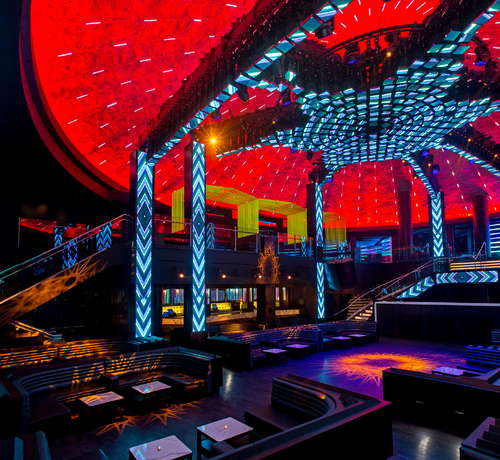 #1 The Best Hotels for Nightlife in Miami

#4 The Best Hotel Restaurants in Miami 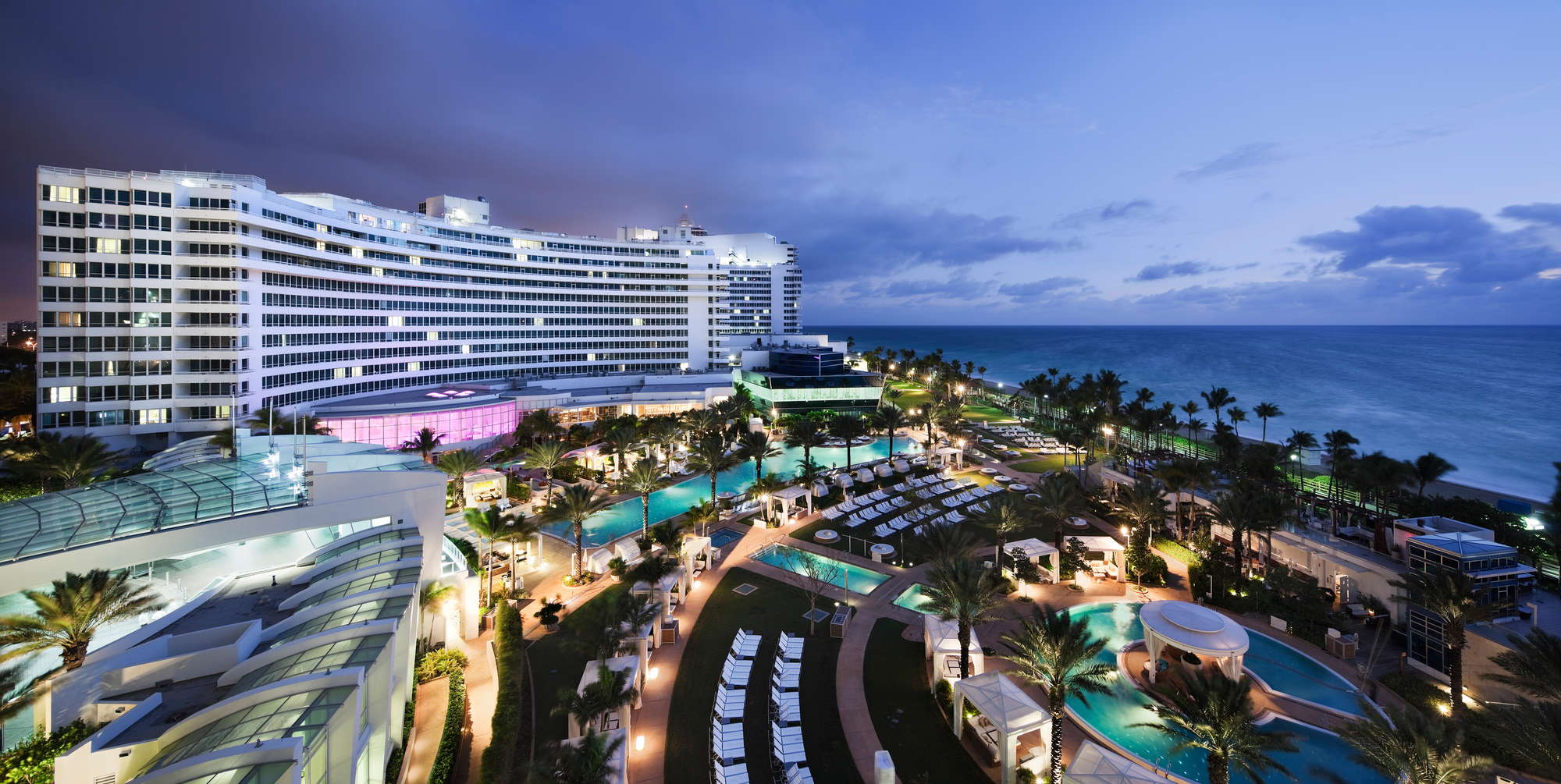 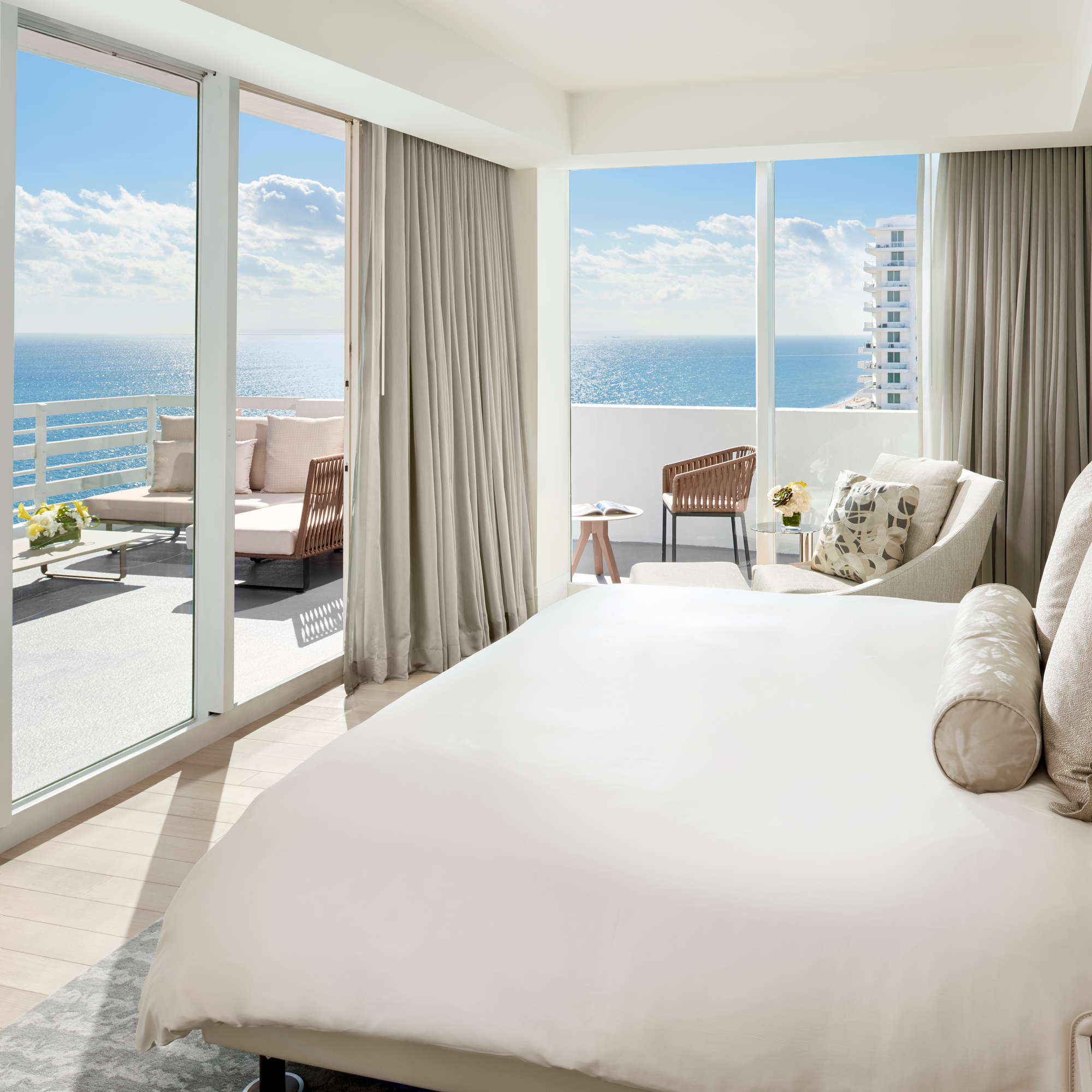 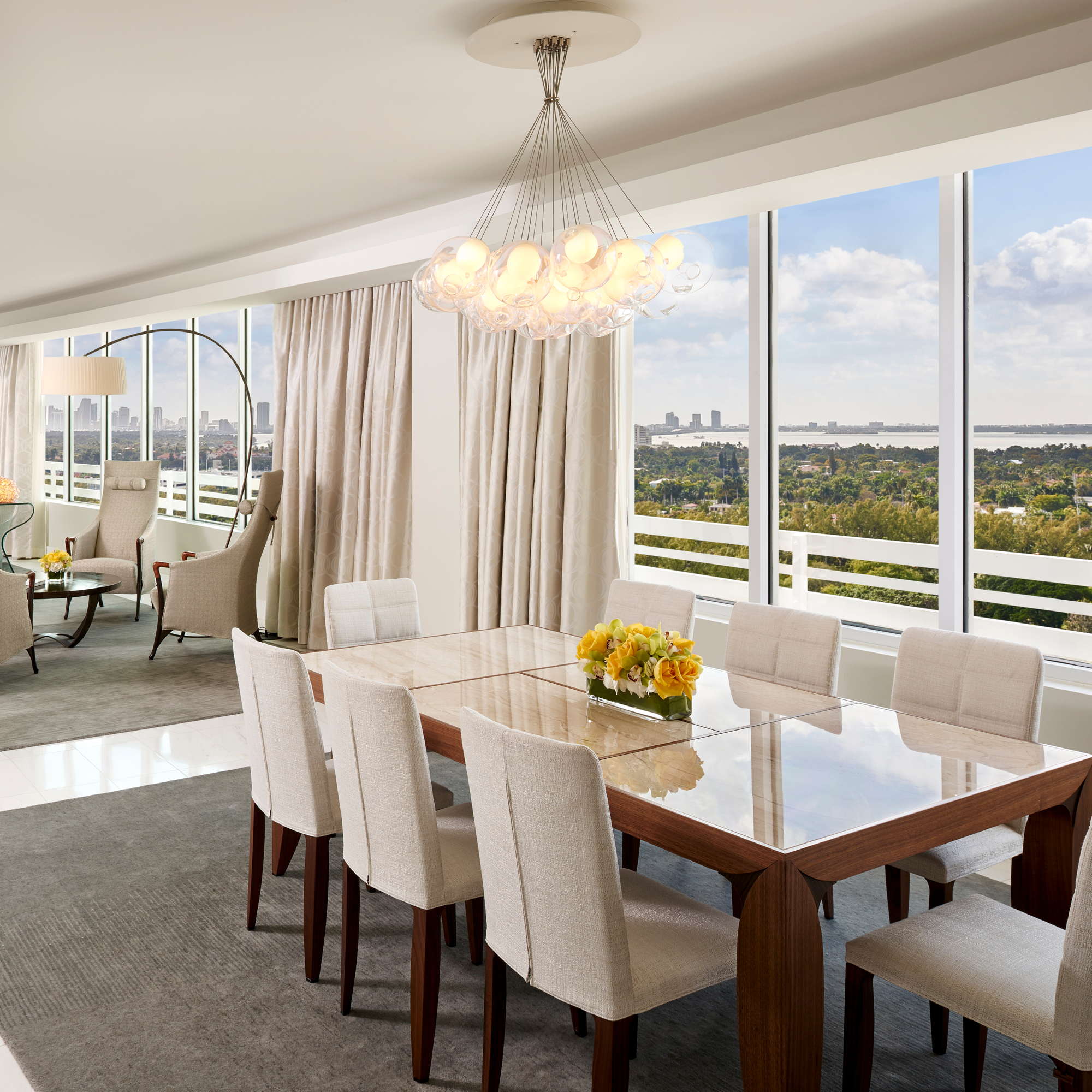 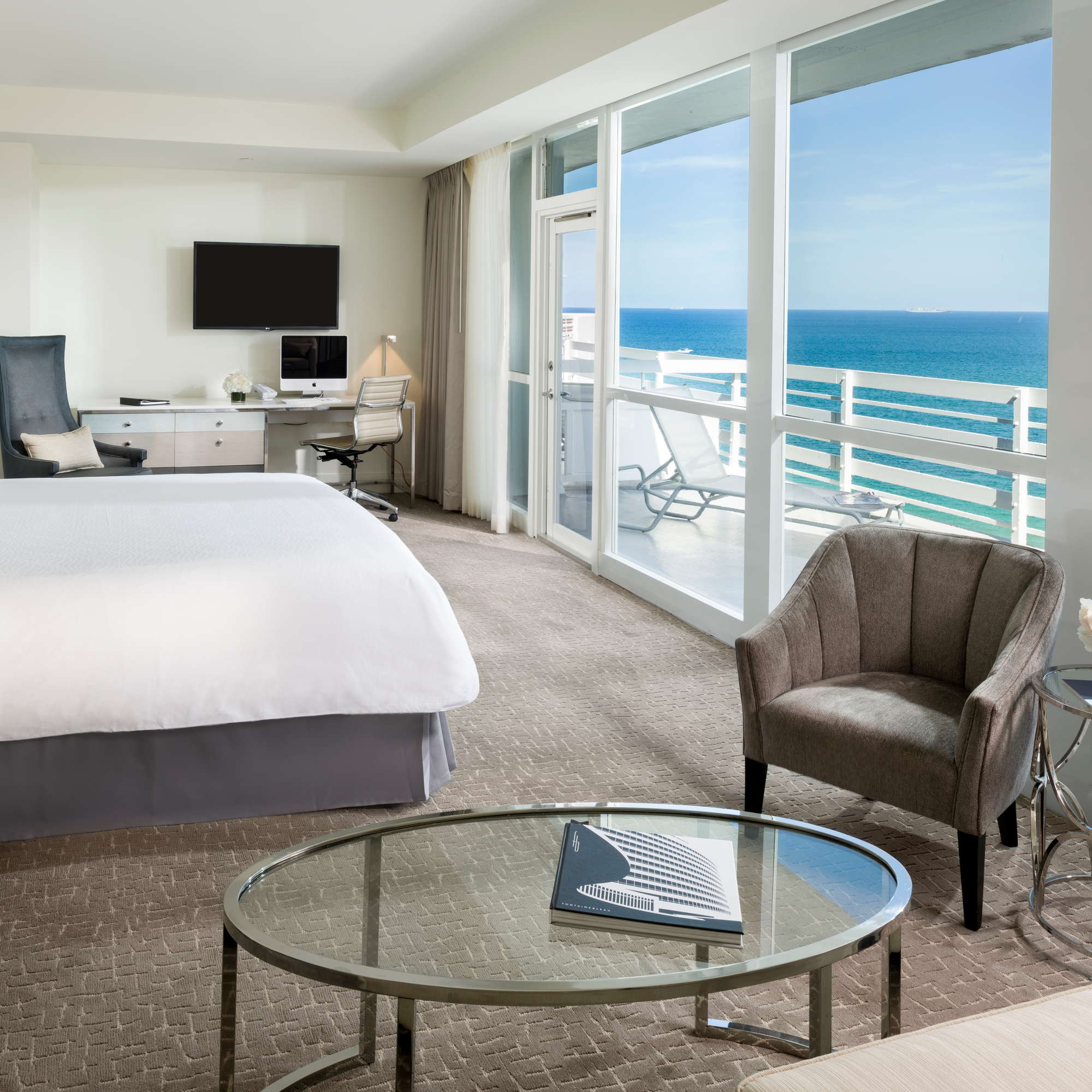 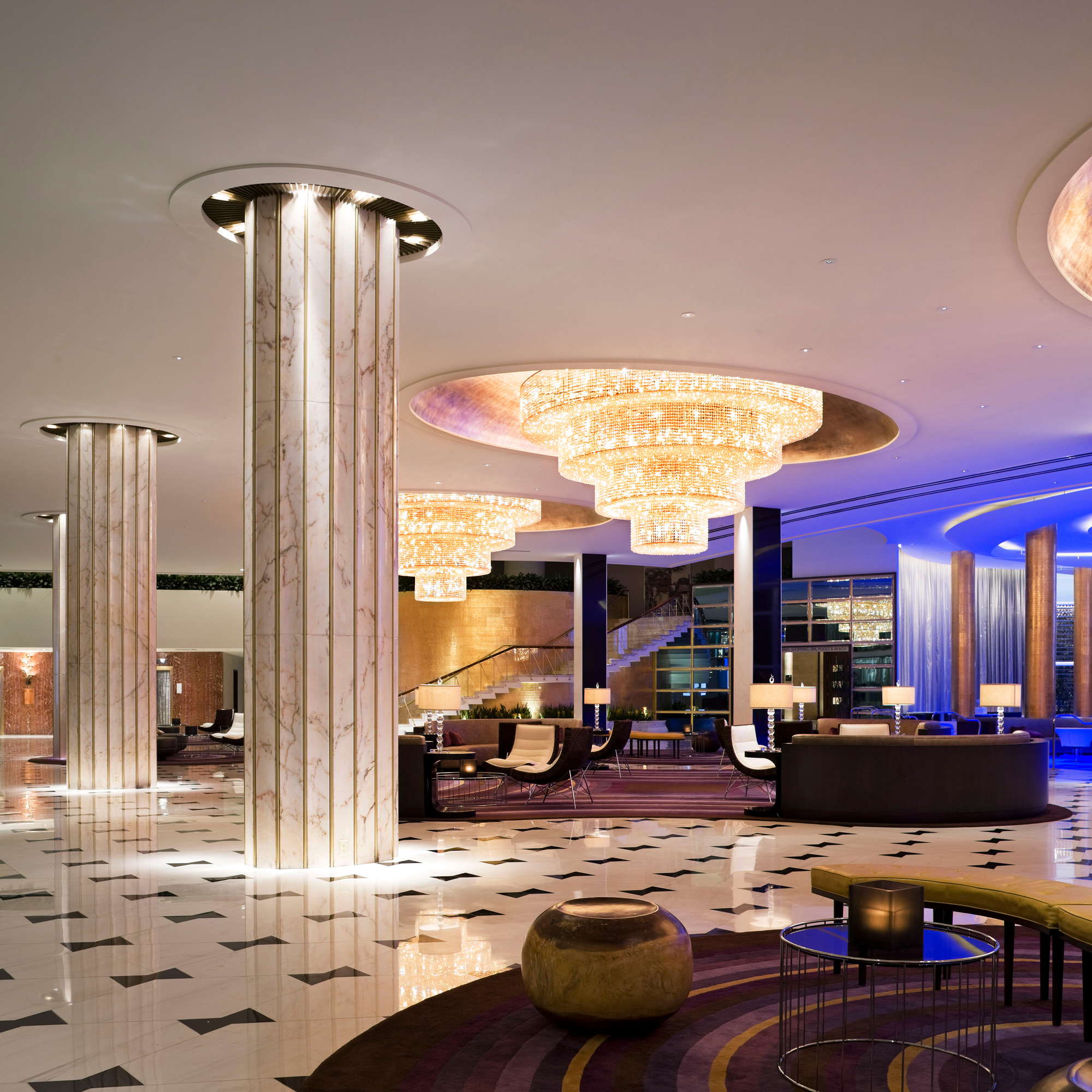 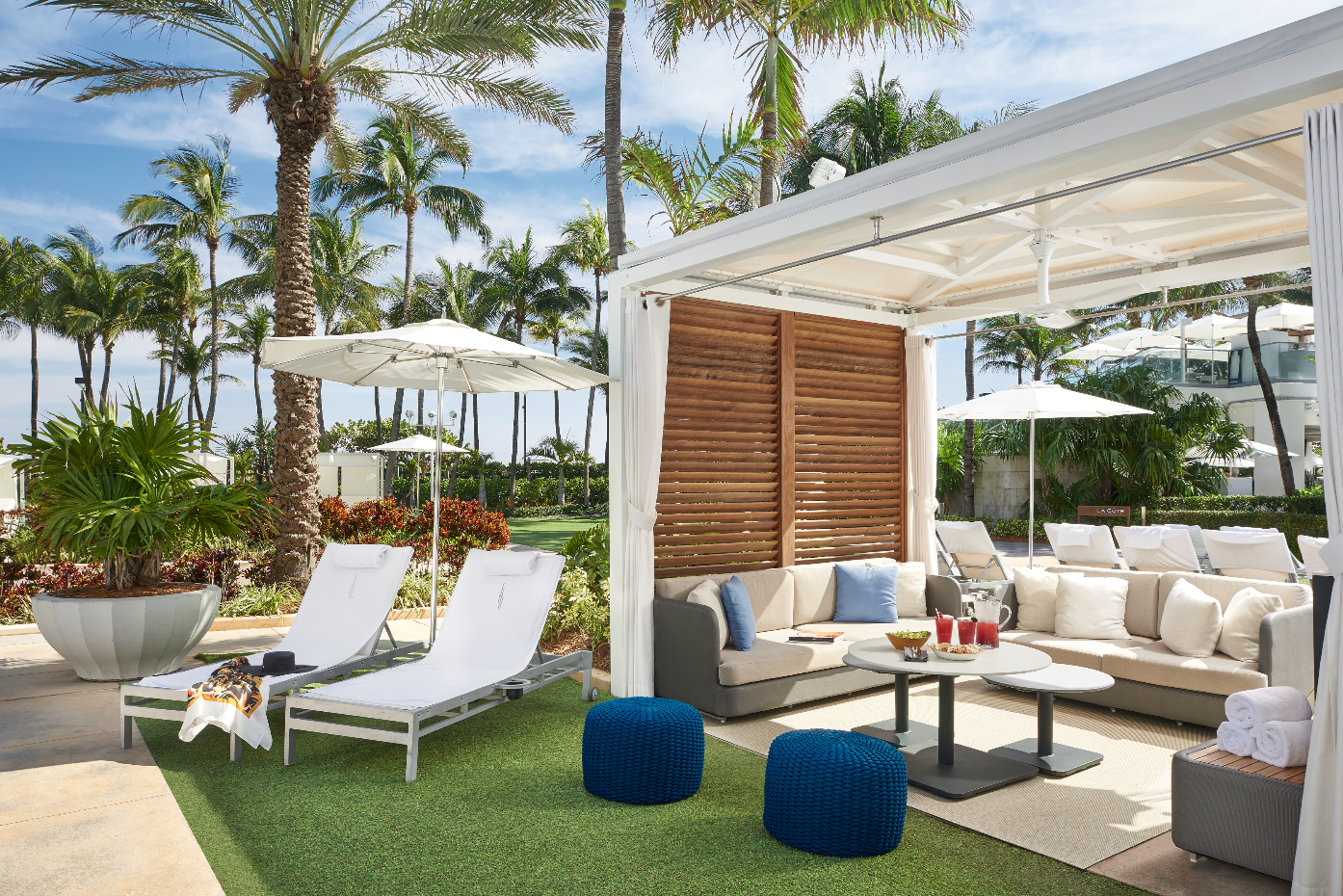 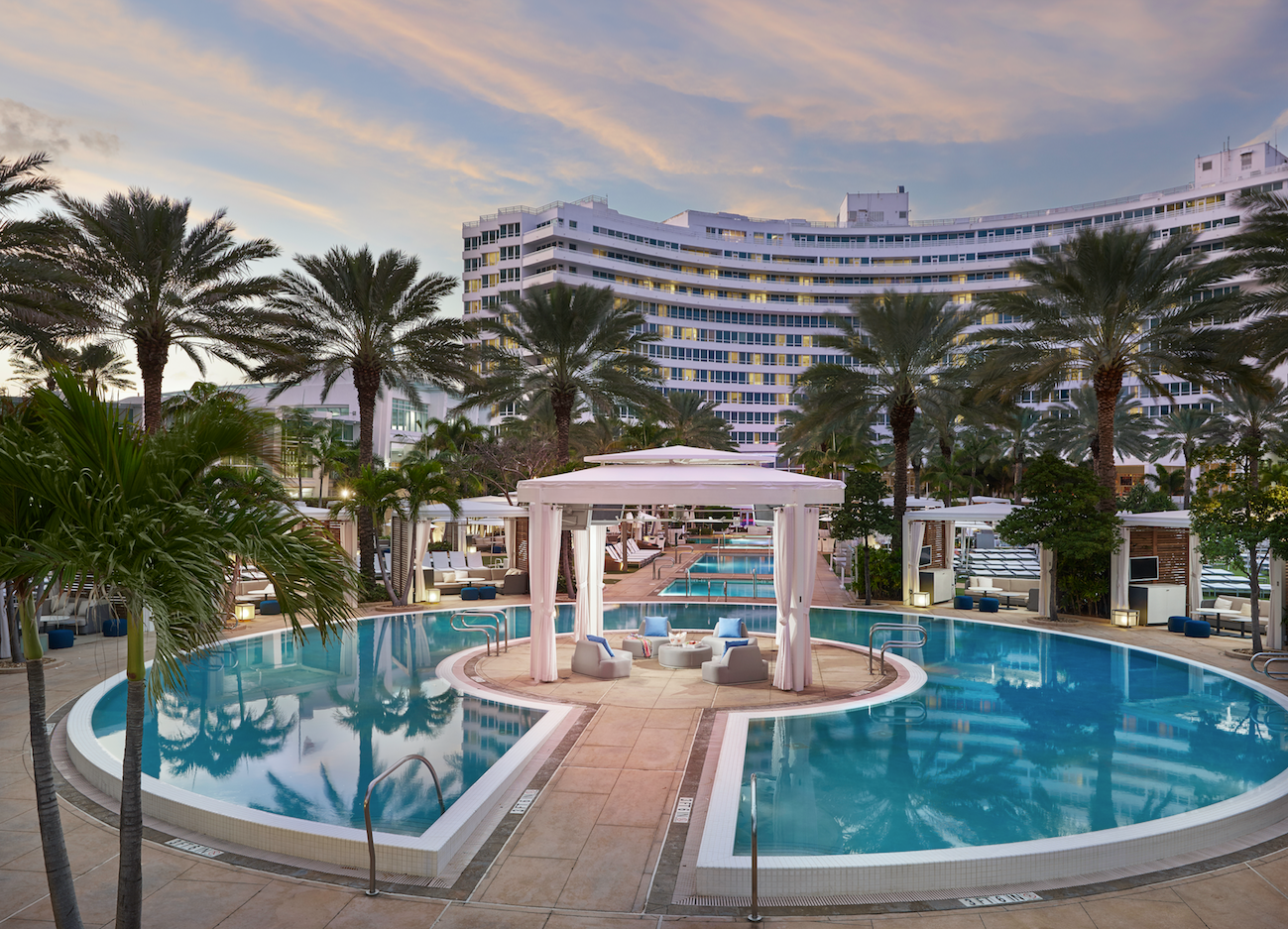 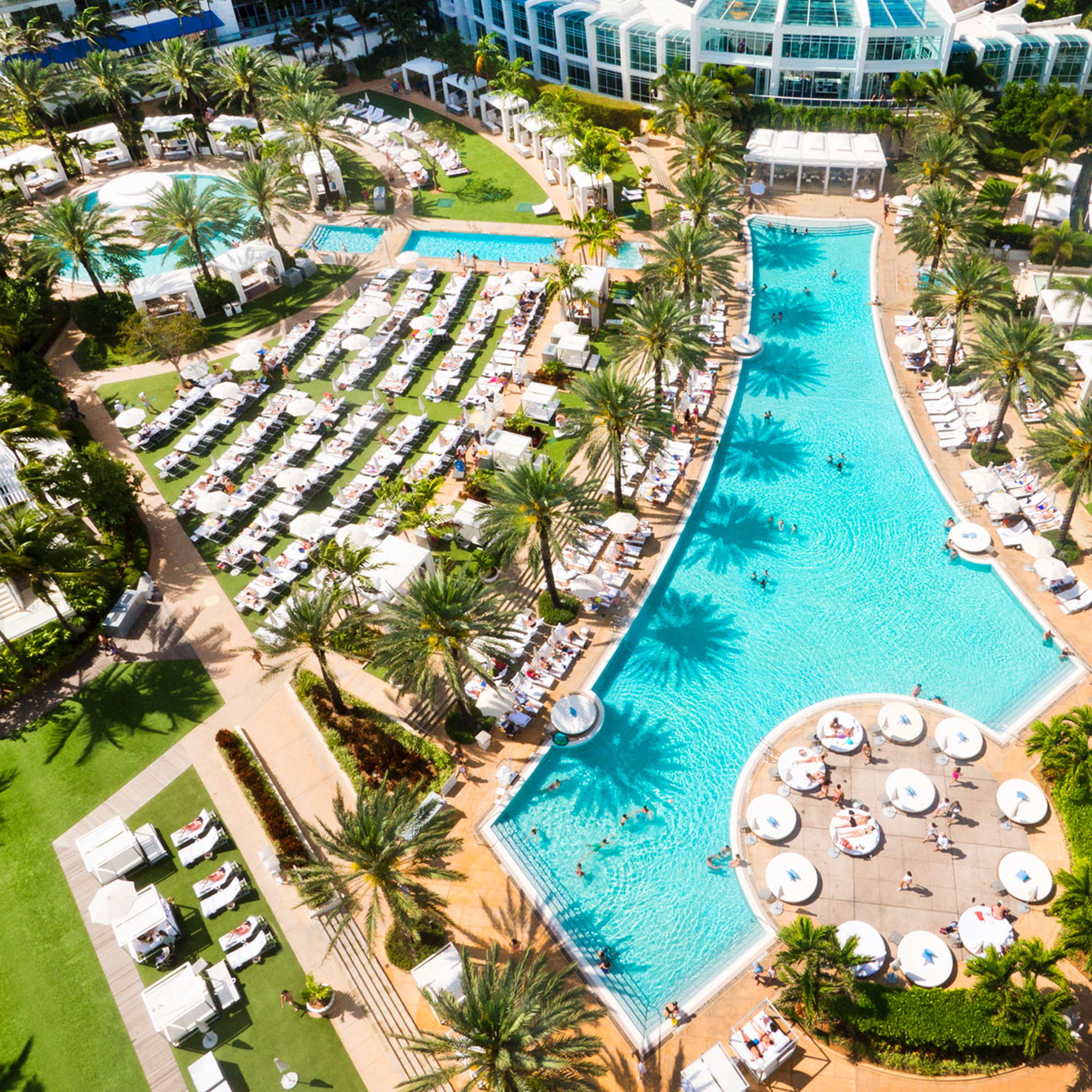 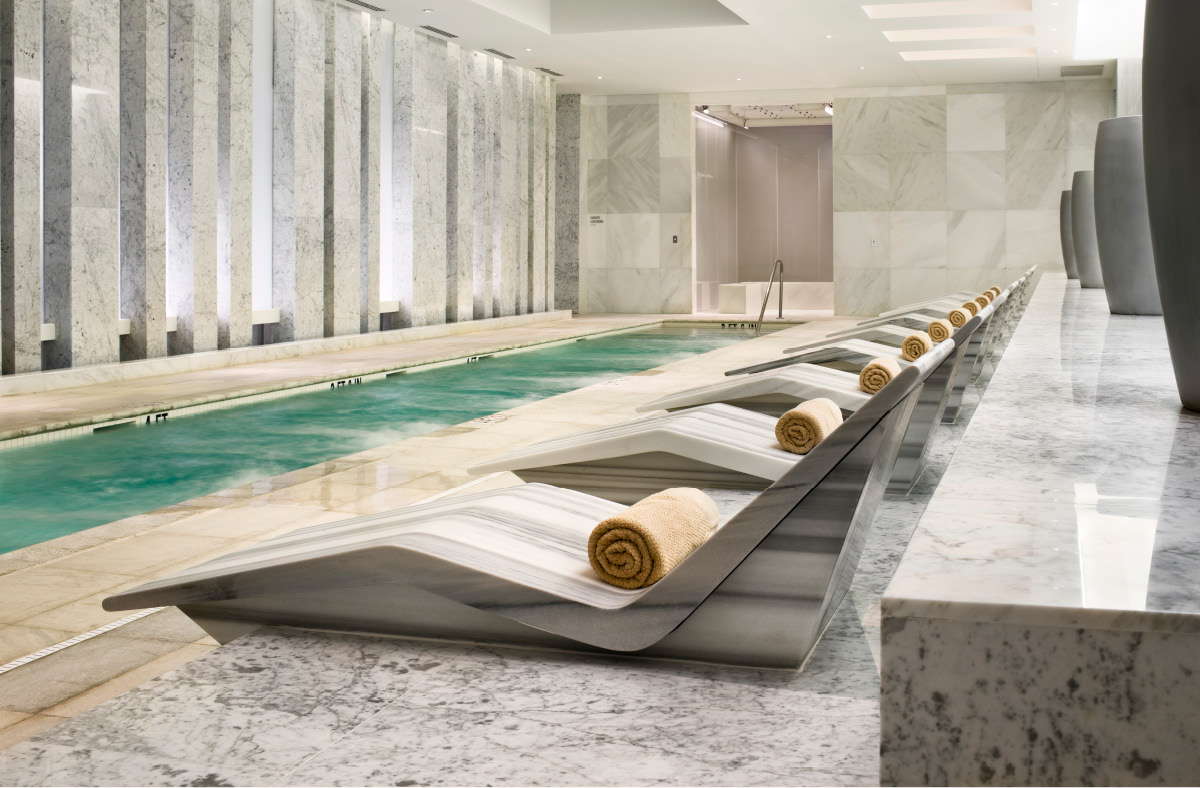 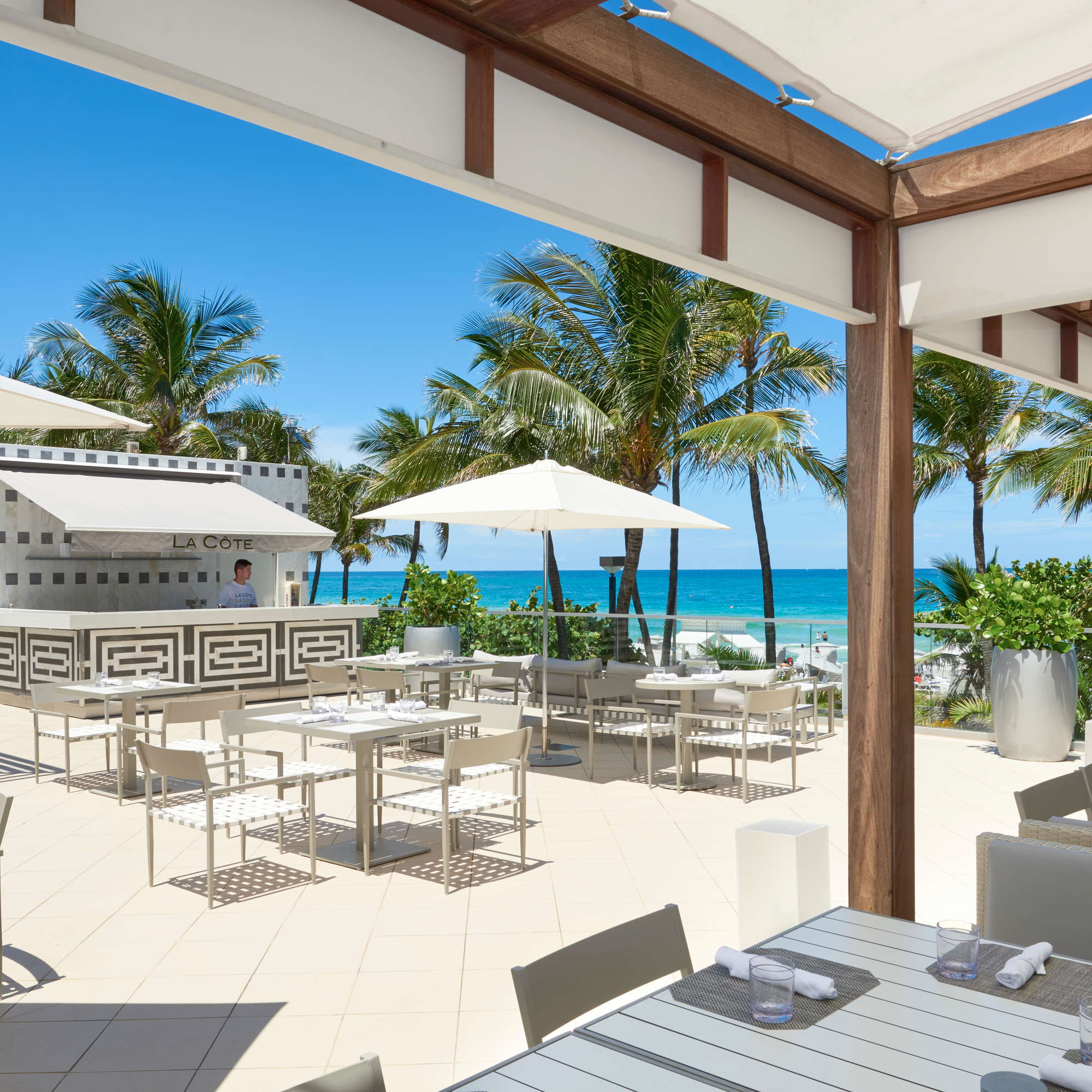 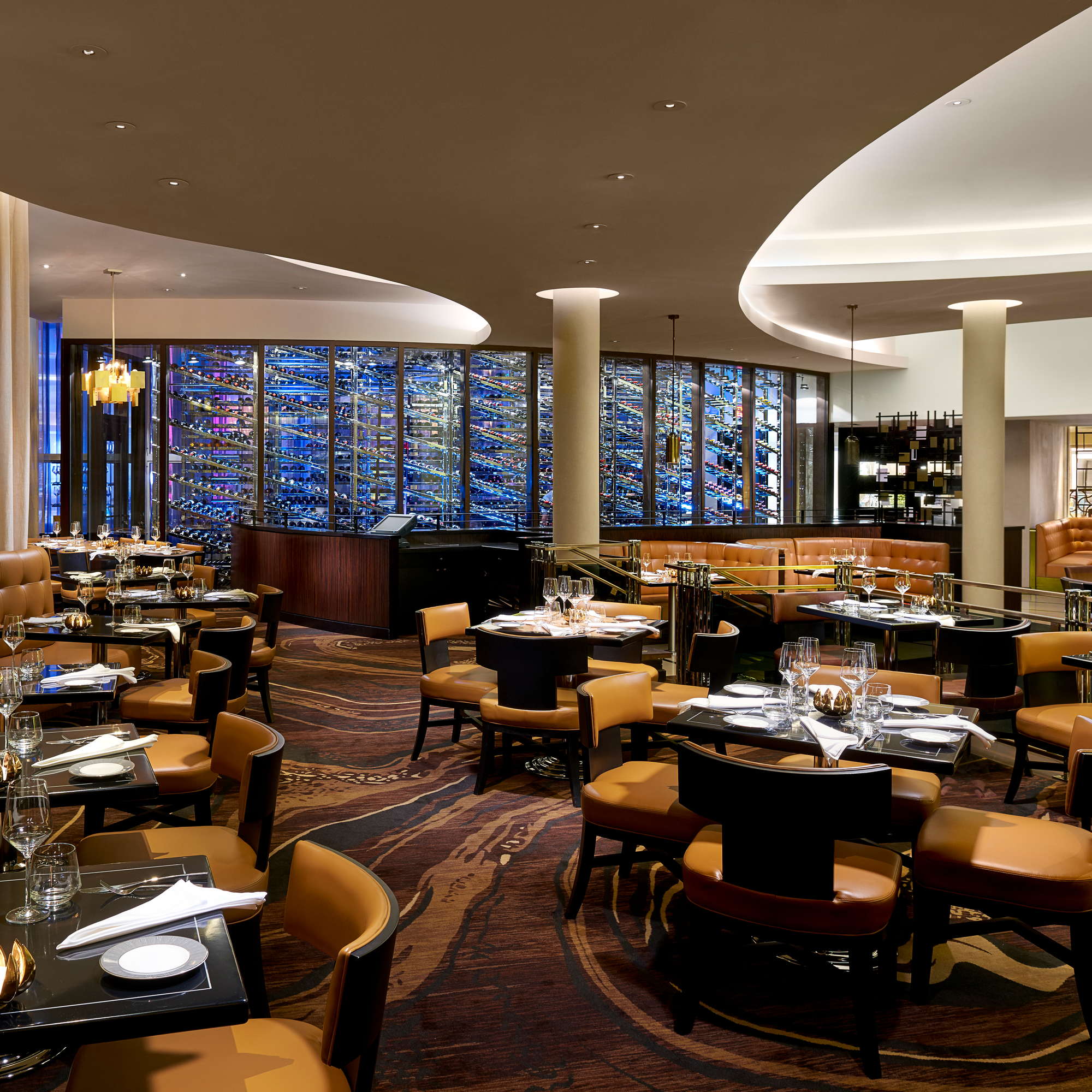 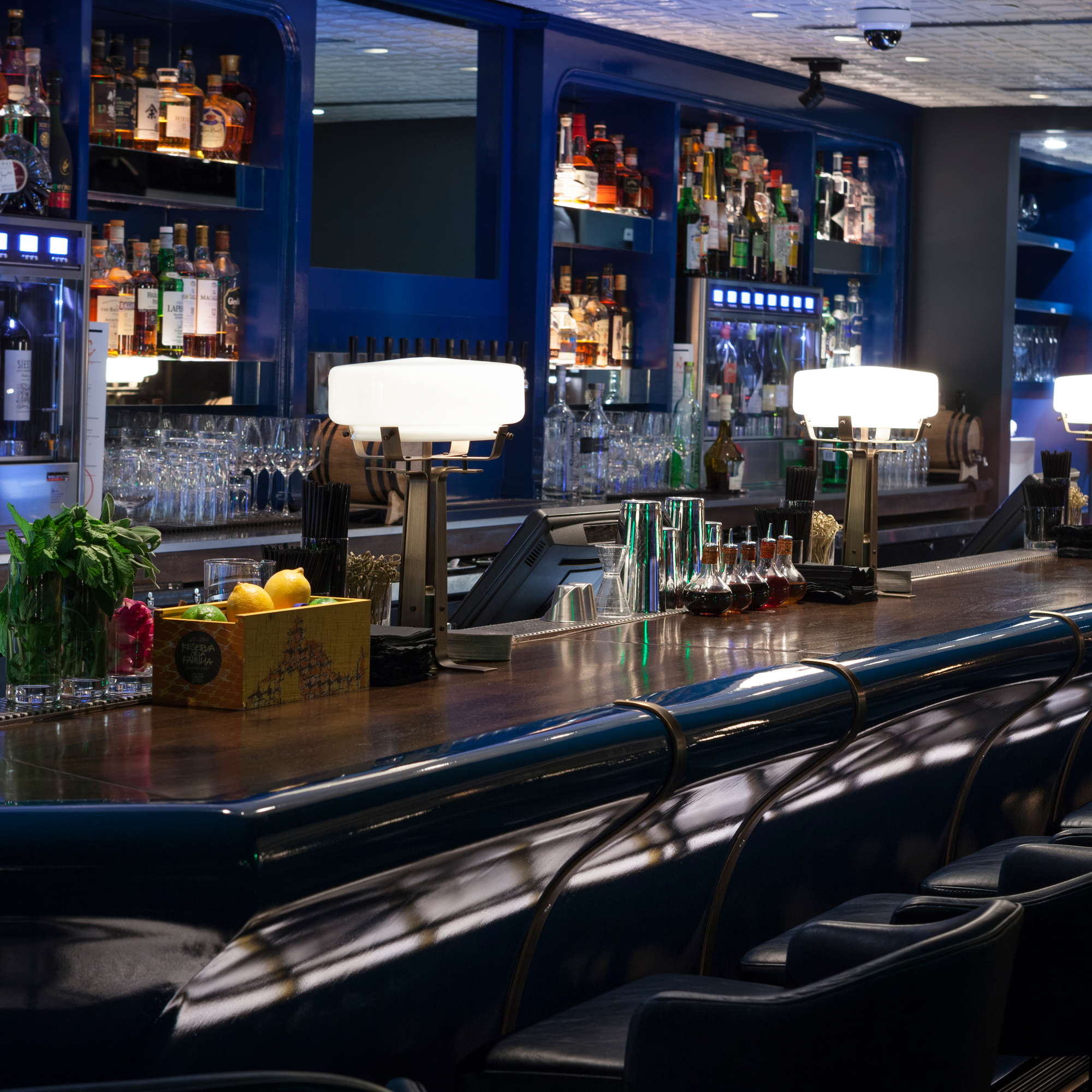 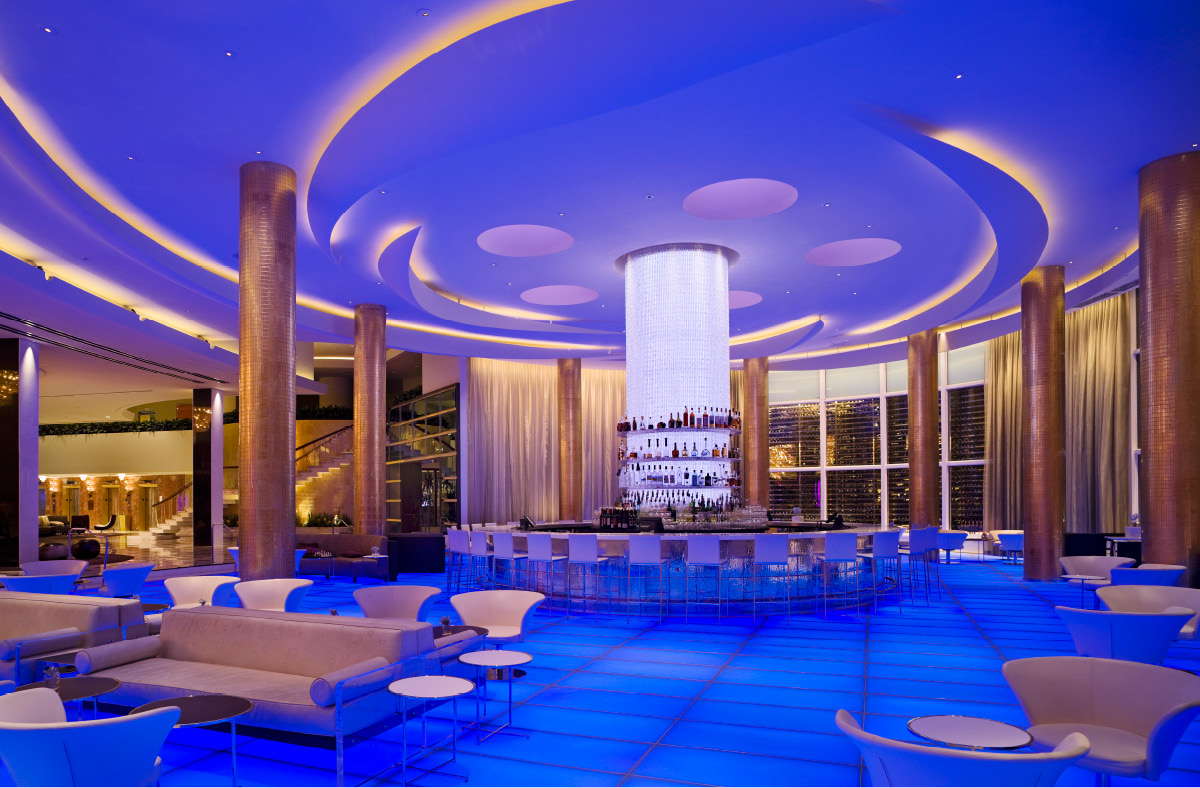