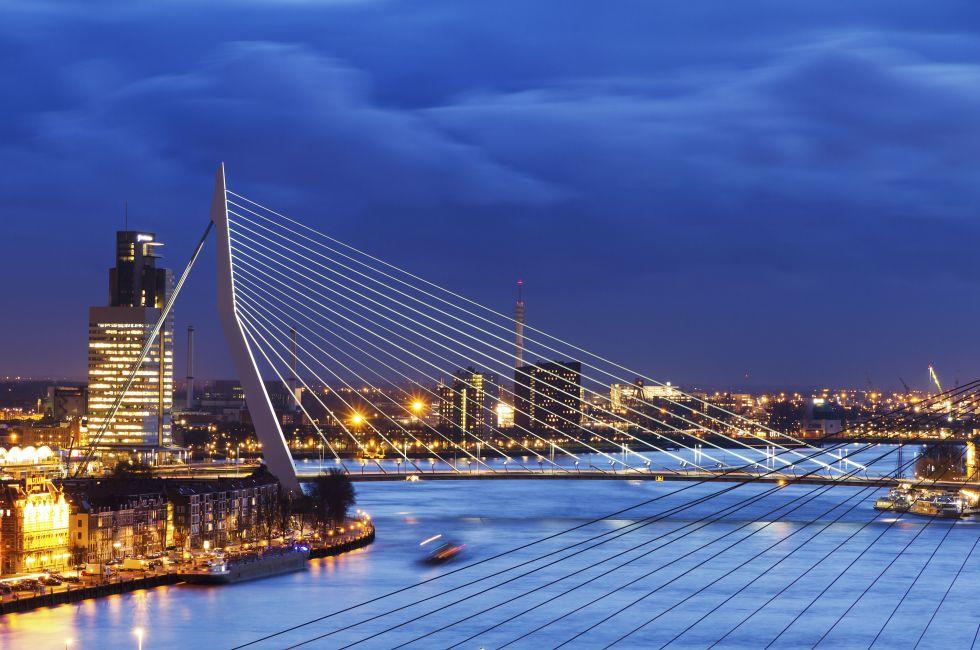 Rotterdam looks to the future like almost nowhere else. The decision to leave the past behind wasn't made entirely through choice however—the old town disappeared overnight on May 14, 1940, when Nazi bombs devastated an area greater than one square mile, sweeping away more than 36,000 buildings in just a few torrid hours.

Since then, a new landscape of concrete, steel, and glass has risen like a phoenix from the ashes, and today this world port is home to some of the 21st century's most architecturally important creations. The city skyline—especially in the areas around the station and by the Maas on the Kop van Zuid development—is constantly changing, and as each year passes it lives up more and more to its billing as "Manhattan-on-the-Maas." Many of the new buildings are commissioned from top-drawer contemporary architects like Rem Koolhaas and Sir Norman Foster, and each has a striking identity.

That isn't to say the city is all glass and steel however. Areas such as historic Delfshaven—where the pilgrim fathers set sail for the New World aboard the Speedwell in 1620—escaped the worst effects of the war, and still retain their old character and charm. And in between old and new, Het Park (The Park), large and leafy, has a maze of paths weaving between small lakes and ponds to provide cool shade in summer and a welcome break from the urban sprawl at any time of year. As if that wasn't enough reason to visit, Rotterdam also boasts some of the country's best museums and top shopping opportunities.

Thanks to its location on the deltas of the Rhine and Maas rivers, Rotterdam has become the world's largest seaport. More tons of shipping than through all of France combined pass through its harbors and the enormous Europoort. The rapid expansion of the port in the postwar years created a huge demand for labor, bringing waves of migrants and turning Rotterdam into one of the most ethnically diverse cities in Europe.