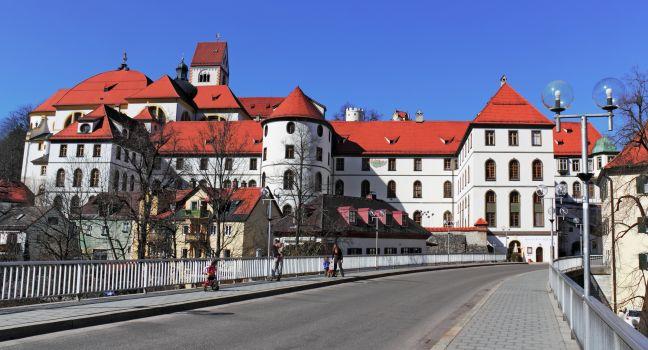 One of the best-preserved late-Gothic castles in Germany, Hohes Schloss (High Castle) was built on the site of the Roman fortress that once guarded this Alpine section of the Via Claudia, the trade route from Rome to the Danube. Evidence of Roman occupation of the area has been uncovered at the foot of the nearby Tegelberg Mountain, and the excavations next to the Tegelberg cable-car station are open for visits daily. The Hohes Schloss was the seat of Bavarian rulers before Emperor Heinrich VII mortgaged it and the rest of the town to the bishop of Augsburg for 400 pieces of silver. The mortgage was never redeemed, and Füssen remained the property of the Augsburg episcopate until secularization in the early 19th century. The bishops of Augsburg used the castle as their summer Alpine residence. It has a spectacular 16th-century Rittersaal (Knights' Hall) with a carved ceiling, and a princes' chamber with a Gothic tile stove.