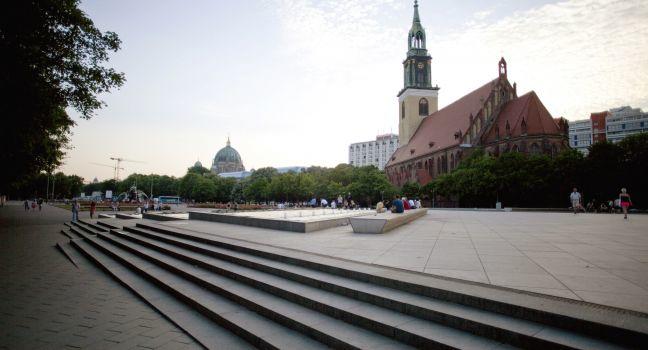 This bleak square, bordered by the train station, the Galeria Kaufhof department store, and the 37-story Park Inn Berlin-Alexanderplatz hotel, once formed the hub of East Berlin and was originally named in 1805 for Czar Alexander I. German writer Alfred Döblin dubbed it the "heart of a world metropolis" (a quote from his 1929 novel Berlin Alexanderplatz is written on a building at the northeastern end of the square). Today it's a basic center of commerce and the occasional festival. The unattractive modern buildings are a reminder not just of the results of Allied bombing but also of the ruthlessness practiced by East Germans when they demolished what remained. A famous meeting point in the south corner is the World Time Clock (1969), which even keeps tabs on Tijuana.