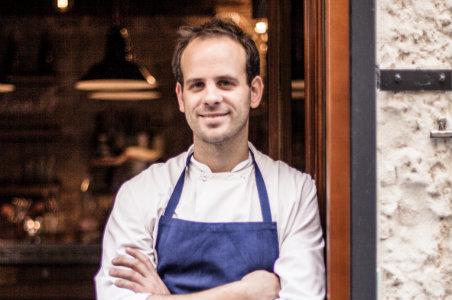 It was celebrity chef Jamie Oliver who first referred to Greg Marchand as “Frenchie.” It was in Oliver's fabulously successful London restaurant Fifteen, and Marchand was the only Frenchman toiling away in the kitchen.

Neither knew that it would become a lifelong nickname. (Marchand says that newer employees at Oliver's restaurant “never even learned my real name.”) But it would also become the moniker of Marchand's mini-empire of restaurants on the Rue de Nil in Paris: Frenchie, Frenchie Bar a Vins, and the newest addition, Frenchie To Go.

One thing that isn't necessarily French is the menu. Marchand, who has worked all over the world, including in Hong Kong, Spain, and Scotland, helped to create the New Bistro style of cooking that emphasizes ingredients fresh from the market and preparations that let the natural flavors shine through. It's no surprise that his first restaurant was a success almost from the day it opened.

There's no trick to his style of cooking, Marchand insists. To prove his point, he recently penned Frenchie: New Bistro Cooking, which makes his recipes seem simple enough even for cooks who have never attempted French cuisine.

We talked with Marchand about cooking tips he's picked up around the world, his philosophy in the kitchen, and his favorite eateries in Paris.

You're a trailblazer of the New Bistro movement, which emphasizes fresh ingredients and simple preparations. Is this what you intended when you opened Frenchie back in 2009?

I wanted to create a place where I would want to go and, most importantly, return to. I wanted the restaurant to emphasize fresh products and have a short, ever-changing menu with affordable prices. (That was actually the introduction to the business plan that I showed the bank when I applied for a loan.) I didn't really know what was going on at the time in Paris as I had living abroad for the past 10 years, so I guess I was in the right place with the right offer at the right time.

Is it easier finding seasonal produce these days in Paris?

I don't think it has ever been complicated. France has some of the greatest produce in the world and most of it is readily available in Paris. I worked in many cities abroad and found very good produce, but it was never so readily available. There is truly something about the terroir over here. Call me chauvinist, but I find that vegetables taste better here. That said, while I was cooking at Gramercy Tavern in New York City, I remember going to the Union Square Greenmarket during the good season and tasting amazing stuff. And I've never found fresh chickpeas over here in Paris.

Are there any ingredients you've come to love over the years? Anything you've stopped using?

I love good olive oil. I go to Sicily every year during the olive harvest with Cedric Casanova from “la tete dans les olives“, literally “the head in the olives.” He is a great Sicilian guy who is promoting artisanal Sicilian products here in Paris and in France. We do a Frenchie olive oil that we use in the kitchen at Frenchie and that we sell at the restaurant, too. I usually buy the whole production of one varietal from one producer for the year.

Even when they know you spent a decade cooking abroad, are patrons surprised when your dishes aren't always what we think of as French cuisine?

I don't think most of our guests expect French cooking when they come and visit us. What is French cuisine today? For me, I do French-based cuisine using the world and my experiences abroad as my larder.

One food writer called you the “most American chef in Paris.” Is that a fair description?

That's a personal point of view that I respect, and I can understand it because of my background. Self-description is something I find hard to do. We should ask what French food writers think about that.

You spent a year working at New York's Gramercy Tavern. What's different about a kitchen in New York and Paris?

The size and pace mostly, with the span of opening hours. In Paris most restaurants are open five days a week with lunch from 12 to 2, and dinner from 8 to 11. In New York, it's more like seven days a week, all day, with an a.m. team and a p.m. team. In New York, you have a fine dining restaurant doing 200 covers a night. It's a huge machine. In France it's more intimate: most fine dining restaurants don't exceed 60 to 80 covers a night.

The business model is different here, too. I was speaking to a famous chef from California who came to dine at Frenchie last week about my plan for renovating Frenchie. He asked me if I was going to expand, to which I replied, “No, I'm going to lower the number of seats and probably earn less in the process.” He looked at me strangely and said, “Ah, the French business model, can't get around it.” I guess I'm not looking at a final destination in life, but just a nice journey.

You called your take-out restaurant, Frenchie To Go, the first “New York-style deli” in Paris. Anything that would surprise New Yorkers?

Well, maybe that a Frenchman went all the way in doing hot dogs, bagels, pulled pork, lobster rolls, and pastrami with everything house-made, from our own fermented sauerkraut for the hot dog, to our pastrami and house-smoked arctic char for the bagel. Our American customers usually leave very happy, as do our British ones, who say that our bacon sarnie and fish and chips kick ass.

Do you have a chance to try out other restaurants in Paris? Any favorites?

I love L'Arpege and L'Astrance for a treat. I had a blast at Thoumieux also lately. I also really liked Clamato (80 rue de Charonne), the latest fish restaurant from the owner of Septime. At this time in my life, with two young children and three restaurants, going to restaurants is difficult. I don't eat out often enough.

Mark Sullivan is a travel editor for Fodor's, specializing in cities and cultural destinations. Follow him on Twitter: @markenroute.