Medieval Paris: A Walking Tour of the Marais

By Eric Jager, author of Blood Royal: A True Tale of Crime and Detection in Medieval Paris 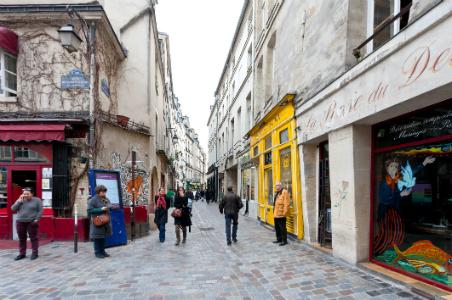 In Paris, you can walk in history’s footsteps: A street lined by newer buildings may in fact be very old, preserving an outline of the medieval city and a vanished way of life. In the Marais, one of the city’s oldest quarters, the past is all around you if you know where to look. You can turn a corner and suddenly see an old city wall, a Gothic doorway—or a crime scene where brutal deeds long ago changed the course of history.

This walking tour winds through Paris streets where powerful nobles once rode to and from their palaces, where assassins lurked to ambush them, and where ordinary people lived and watched history unfold before their eyes. (Some of these places appear in my new historical thriller, Blood Royal: A True Tale of Crime and Detection in Medieval Paris.)

Our tour starts on the Right Bank, just east and a little north of the Pont Marie Métro stop (line 7), where you’ll spot the elegant turrets and fancy stone gables of the Hôtel de Sens, an archbishop’s palace (built 1475–1507), now home to the Forney Art Library. You can sample the prelate’s taste for luxury from a gate looking into the courtyard along the Rue de Fauconnier. Don’t miss the cannonball still embedded in the wall above, a souvenir from the Second French Revolution (1830).

From the Rue de Fauconnier, head eastward along the Rue de l’Ave Maria and turn left (north) at the Rue des Jardins. Along this street stretches a remnant of the Wall of King Philip II (1180–1223), which once encircled all of Paris (a much smaller city then) to keep out robbers and enemy armies.

Walking north along the wall, turn right at the Rue de Charlemagne, go one block east to the Rue Saint-Paul, and turn left onto this narrow medieval street. A short block to the north, you’ll pass the Rue Neuve Saint-Pierre on your right, where a medieval wall and part of a tower rise up nearly seven stories. This is a relic of the old Church of St. Pol, a chapel in the vast palace grounds of the Hôtel St. Pol, the main residence of Charles VI (1380–1422). Charles went mad in 1392; the following year, he was nearly burned to death here at a fancy ball. Four of his friends died in this so-called Bal des Ardents.

Follow Rivoli two blocks west until you come to the Rue Pavée, another medieval street dating from a time when not all streets were paved. Turn right, go north for a short block, then a long block, and turn left (west) on the Rue des Rosiers. This is the heart of the Jewish quarter. Deportations to the camps took place here during World War II, and Jews in medieval Paris, too, lived under persecution.

Follow the Rue des Rosiers until you dead-end at the Rue Vieille du Temple, and turn right (north) into this narrow street, named for the Priory of the Knights Templar, which stood further to the north in the medieval city. In this street, near no. 43-45, a bloody assassination took place on the night of November 23, 1407: Louis of Orleans, brother of King Charles VI, was murdered by a gang of masked assassins. Louis had often ruled in place of the insane king, and his murder plunged France into civil war, leading to Henry V’s invasion and setting the stage for Joan of Arc. Continue north on the Rue Vieille du Temple to the Rue des Blancs Manteaux (on your left), where Louis’s assassins, their weapons streaked with blood, galloped west through the sleeping city.

Go north another block to the corner of the Rue des Francs Bourgeois, where you’ll see the elegant, turreted House of Jean Hérouet, a royal treasurer in the early 1500s. Built entirely of stone, when most houses were plastered wood on stone foundations, it proclaims a wealthy owner. (If you turn right on Francs Bourgeois, a few yards down on your left is an alley with an official historical sign stating that Louis of Orleans was killed here. As scholars have shown, the sign is wrong!)

From the Rue Vieille du Temple, turn left onto Francs Bourgeois and head west along the south facade of the Hôtel de Soubise, built in the early 1700s and now home to the National Archives. At the next corner, turn right onto Rue des Archives, and walk north about twenty-five yards to the superb Gothic portal flanked by two imposing fortified towers (ca. 1380). This, the last stop on this walking tour, is all that remains of the Hôtel de Clisson, the palatial home built here by Olivier de Clisson (1336–1407), Constable of France, the king’s top military commander. Over the doorway are his family arms.

the streets and houses, portals and palaces we have visited are a reminder of how much the past still clings to Paris, and how often history is just around the corner, if we know where to look.

(For more of medieval Paris, visit the Tour Jean-sans-Peur in the Rue Étienne Marcel, near the Métro stop named for this street (line 4). The ninety-foot tower (1408–1411)—complete with arrow slits and other defenses, plus an elaborately carved stone stairway—reflects the wealth, power, and ferocity of its builder, Duke John of Burgundy).

Eric Jager is an award-winning professor at UCLA and the author of many articles in acclaimed academic journals. He has also written three books, including the widely acclaimed The Last Duel, The Book of the Heart, and The Tempter’s Voice. He lives in Los Angeles.