Everything you need to know about Paris’ Iron Lady.

When the Eiffel Tower was first unveiled in 1889 at the Exposition Universelle or Paris World Fair, she was famously slammed by some France’s most elite intellectuals (including Alexandre Dumas and Guy de Maupassant) as an architectural eyesore. The critics were merciless, describing Gustave Eiffel’s structure as a “tragic street lamp” and using adjectives like “deformed,” “monstrous,” “odious” and “ridiculous.”

Little did they know, that 130 years later the “barbarous mass” would become one of the most iconic and recognizable landmarks in the world, attracting 7 million visitors a year. Over more than a century, the Iron Lady has undergone a few facelifts and diversified her features with new dining options, new gardens, and new experiences. Here’s everything you need to know about visiting the Eiffel Tower today, along with a few fun facts about the Iron Lady. 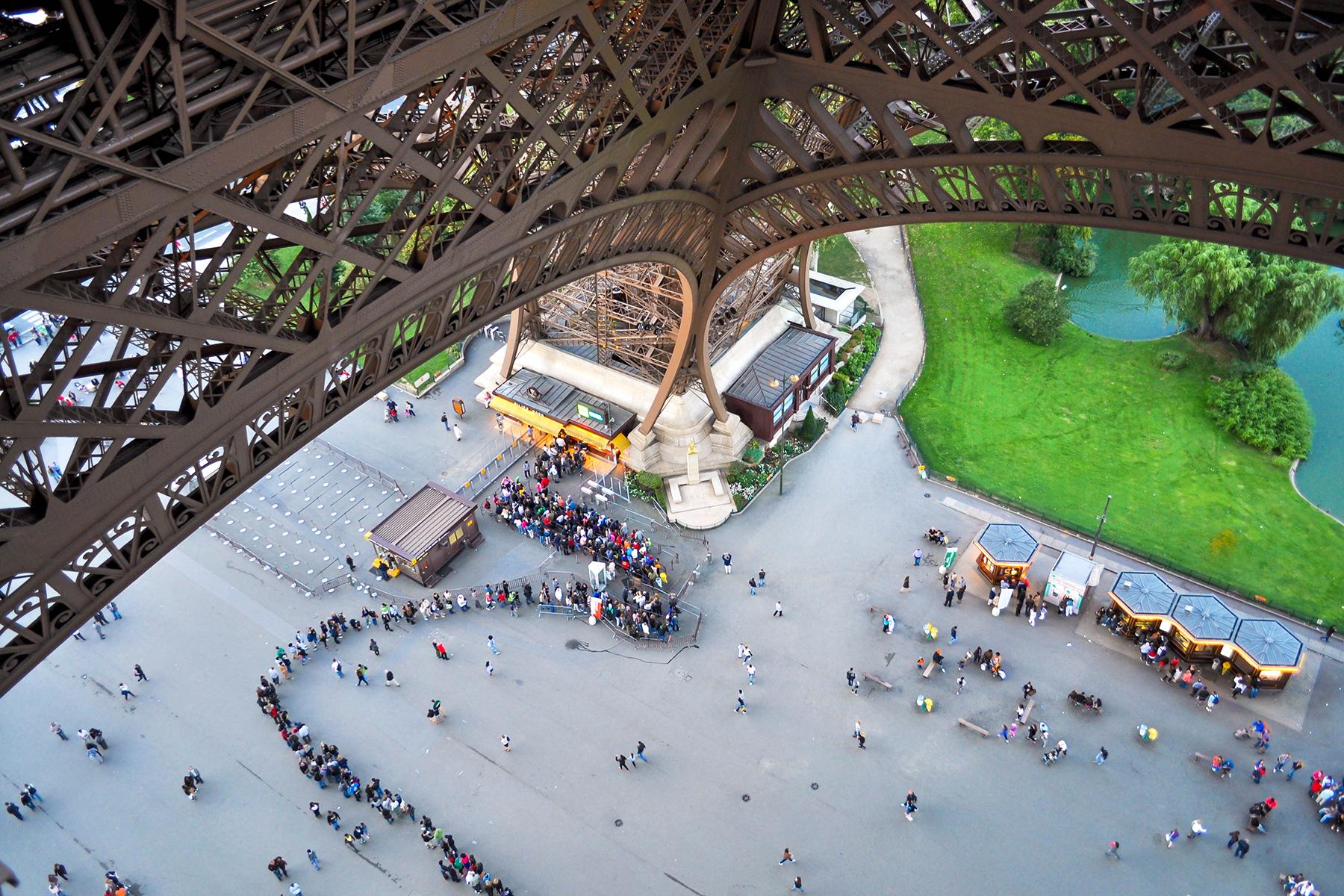 Is There a Way to Bypass Long Lines?

Instead of joining the mile-long lines at the on-site ticket office, shave valuable time and buy your ticket online. You can book an e-ticket for lift access up to 60 days in advance over on the Eiffel Tower’s online booking site. E-ticket holders can fast-track their way directly to security check. Take note, however, that this only applies to visits that include elevator access. If you’re planning to climb the tower using the stairs, tickets are only sold on-site.

INSIDER TIPThere are two entrances to the Eiffel Tower: south and east ends. The east entrance has shorter lines. 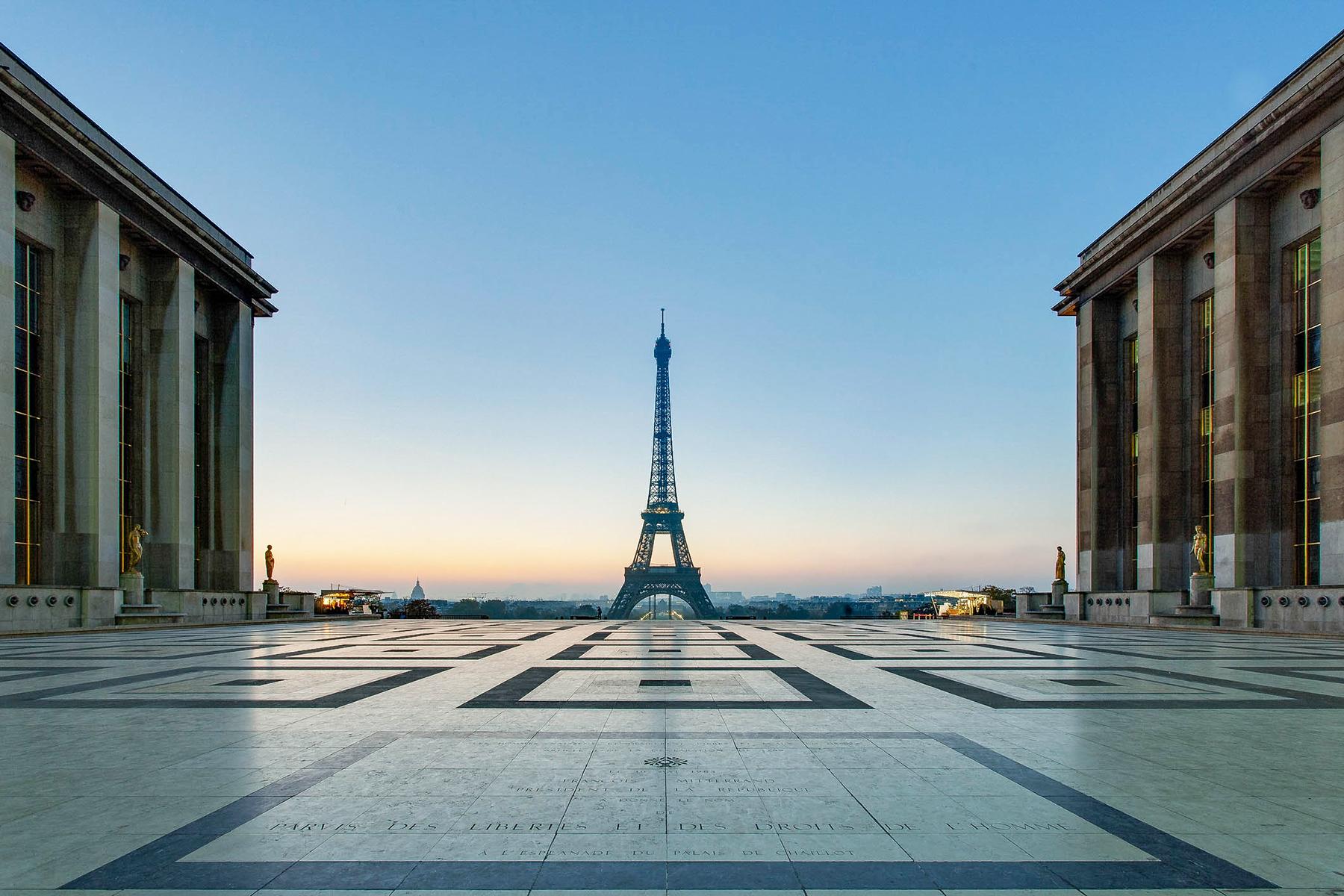 Where’s the Best Spot for Photographing the Iron Lady and Catching Her Good Side?

There are lots of metro stops that will take you to the Eiffel Tower. But Place de Trocadéro on metro lines 6 and 9 offers, perhaps, the most dramatic view of the Iron Lady in all her splendor. It’s the perfect place for capturing a full-length photo of the tower and watching her hourly light show at night. As you make your way south towards the tower, cross the Pont d’Iéna and keep to the west side where you’ll see the Eiffel Tower carrousel, the perfect frame for your Instagram shot with the tower in the background. 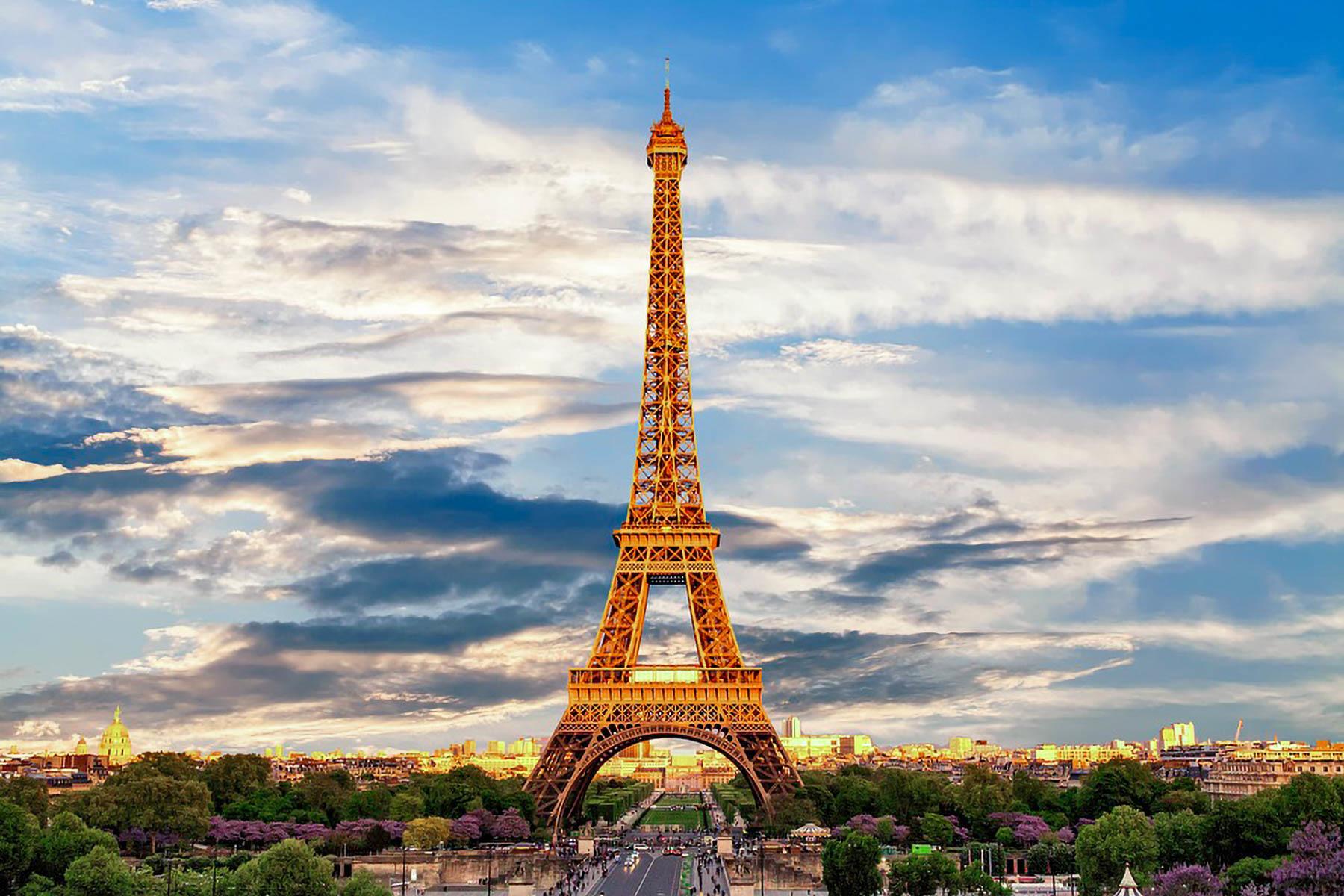 What’s the Best Time of Day to Visit?

Paris is not a huge, sprawling metropolis the way London or New York is. By day, it’s not difficult to spot the tower’s silhouette from afar. But it’s when the Iron Lady puts on her shimmering dress (the one with all the fairy lights) that she really shines. Make an effort to set aside at least one night for catching her magical light show. The tower is open until 11:45 p.m. and hours are extended until 12:45 a.m. over the summer. The last lift to the top is 10:30 p.m. In general, the quietest times to visit are between 9:00-11:00 a.m. and 8:00-10:30 p.m.

When Does the Tower Sparkle?

At nightfall, the tower’s 20,000 light bulbs—5,000 per side—erupt in a dazzling light display but only for five minutes. The show begins on the hour, every hour, until 1:00 a.m.

What Are My Food and Dining Options?

This spring, the Eiffel Tower revamped their restaurants by bringing in a new guard of French chefs to oversee the attraction’s dining options. Local celebrity chef Thierry Marx helms the first-floor restaurant 58 Tour Eiffel, which takes its name after its location in the sky: 58 meters above ground. The restaurant serves local seasonal French cuisine. For a more fine dining experience, there’s Le Jules Verne which re-opened under the vision of Michelin-starred chef Frédéric Anton. There, the menu is contemporary French gastronomy. 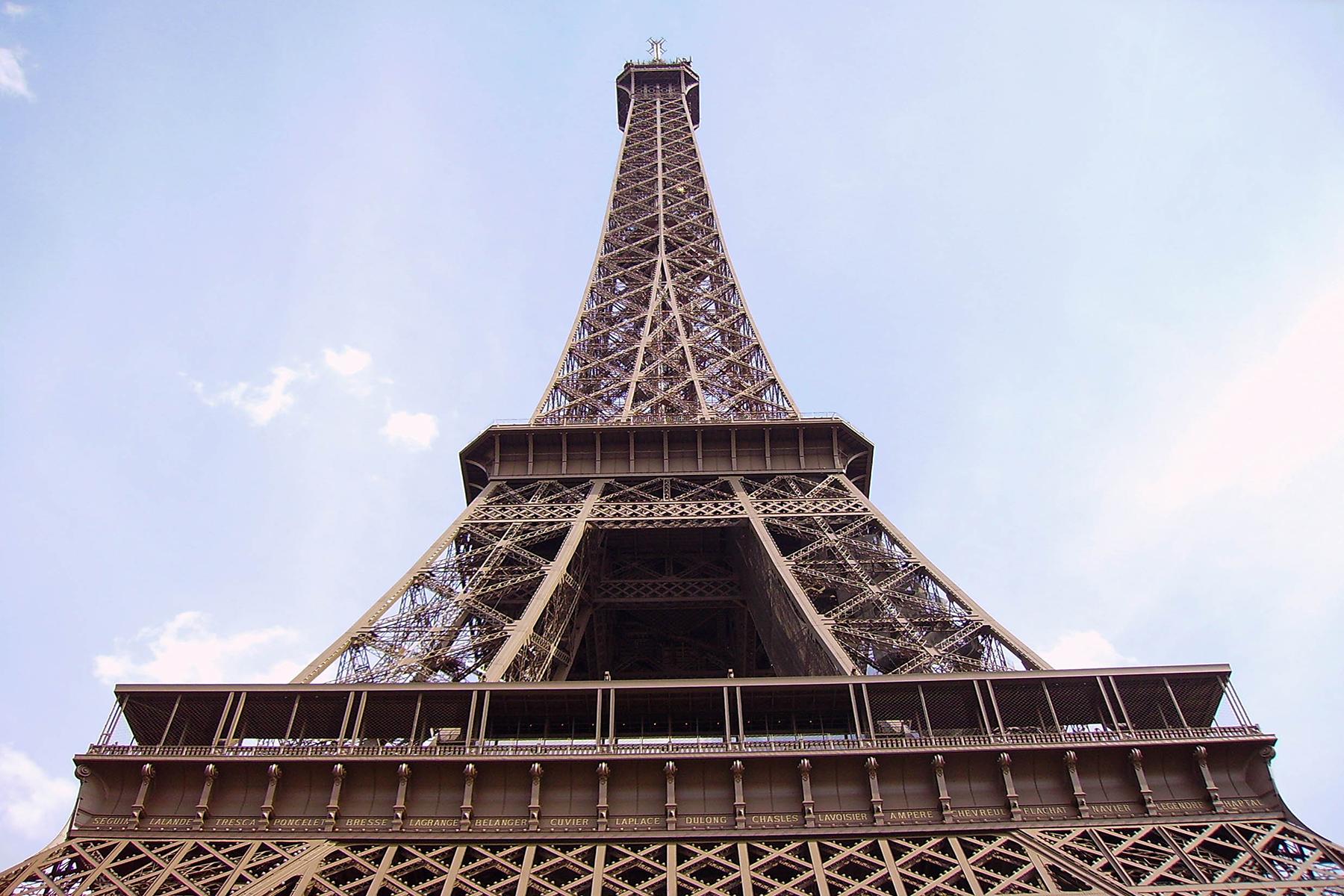 What Is the Significance of the Names Inscribed Along the Tower?

If you look closely along the top base of the first tier, you’ll see names inscribed along all four sides of the tower. The inscriptions pay homage to 72 French scientists, engineers and mathematicians and their contributions to their respective fields. 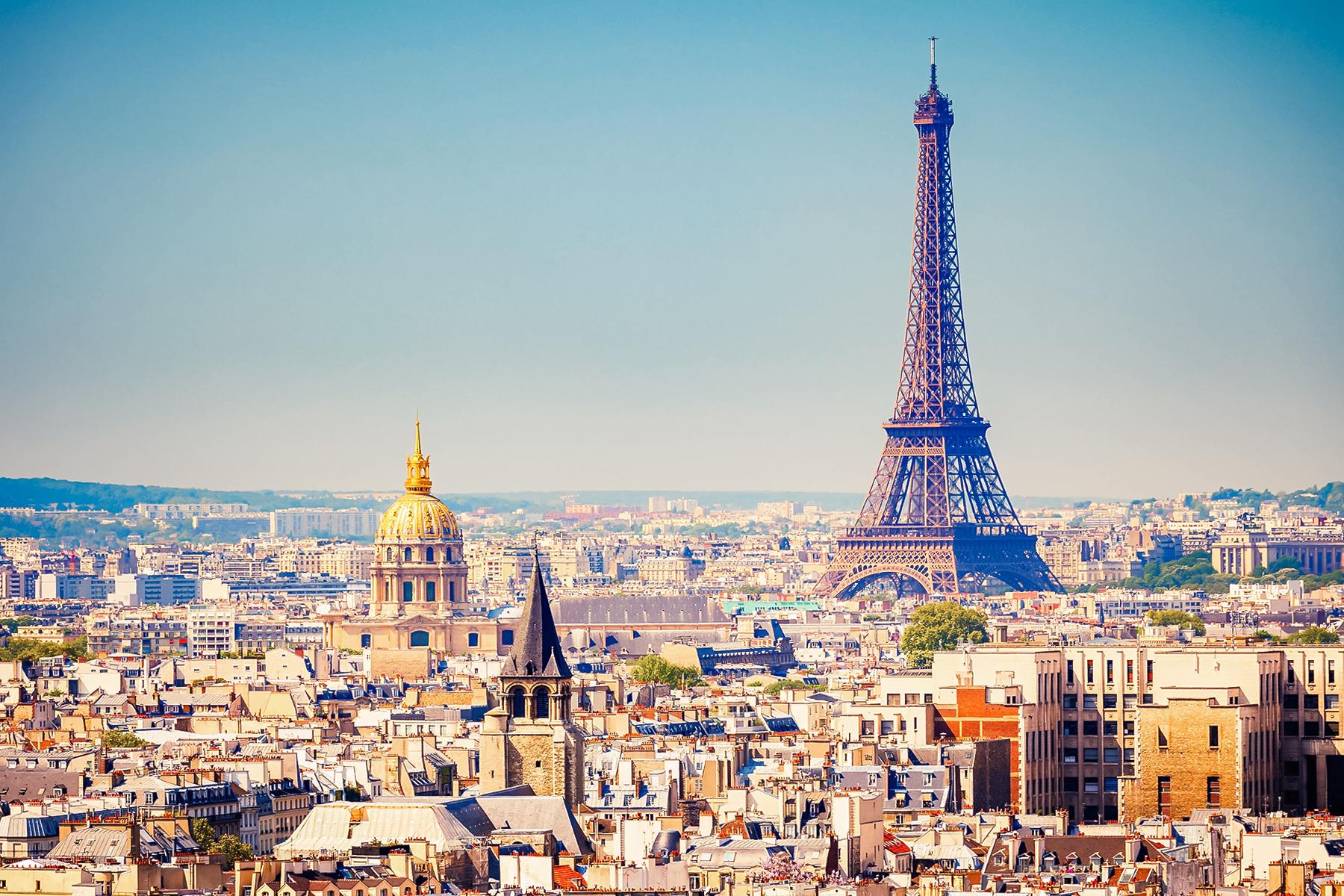 Is It True the Tower Moves, Grows, and Shrinks Throughout the Year?

True. Engineers built the tower to be wind-resistant. During a storm, the tower will sway a few inches in the wind. Likewise, heat from the summer sun can also cause the tower to swell and grow as much as six inches.

Other Than Just Being a Pretty Face, Does the Eiffel Tower Serve a Purpose?

To save the tower from destruction—it was supposed to be dismantled after 20 years —Eiffel devised a scheme to lengthen its lifespan. The tower housed a meteorology lab and would also be used to conduct a series of scientific experiments in physics, astronomy, wind, aerodynamics, and electric lighting. But ultimately it was the tower’s utility as a wireless broadcast transmission antenna that saved it from destruction. The tower sent its first wireless telegraph in 1898. Today, the tower’s 120 antennas are used to broadcast 45 TV channels and 32 radio stations from Paris. 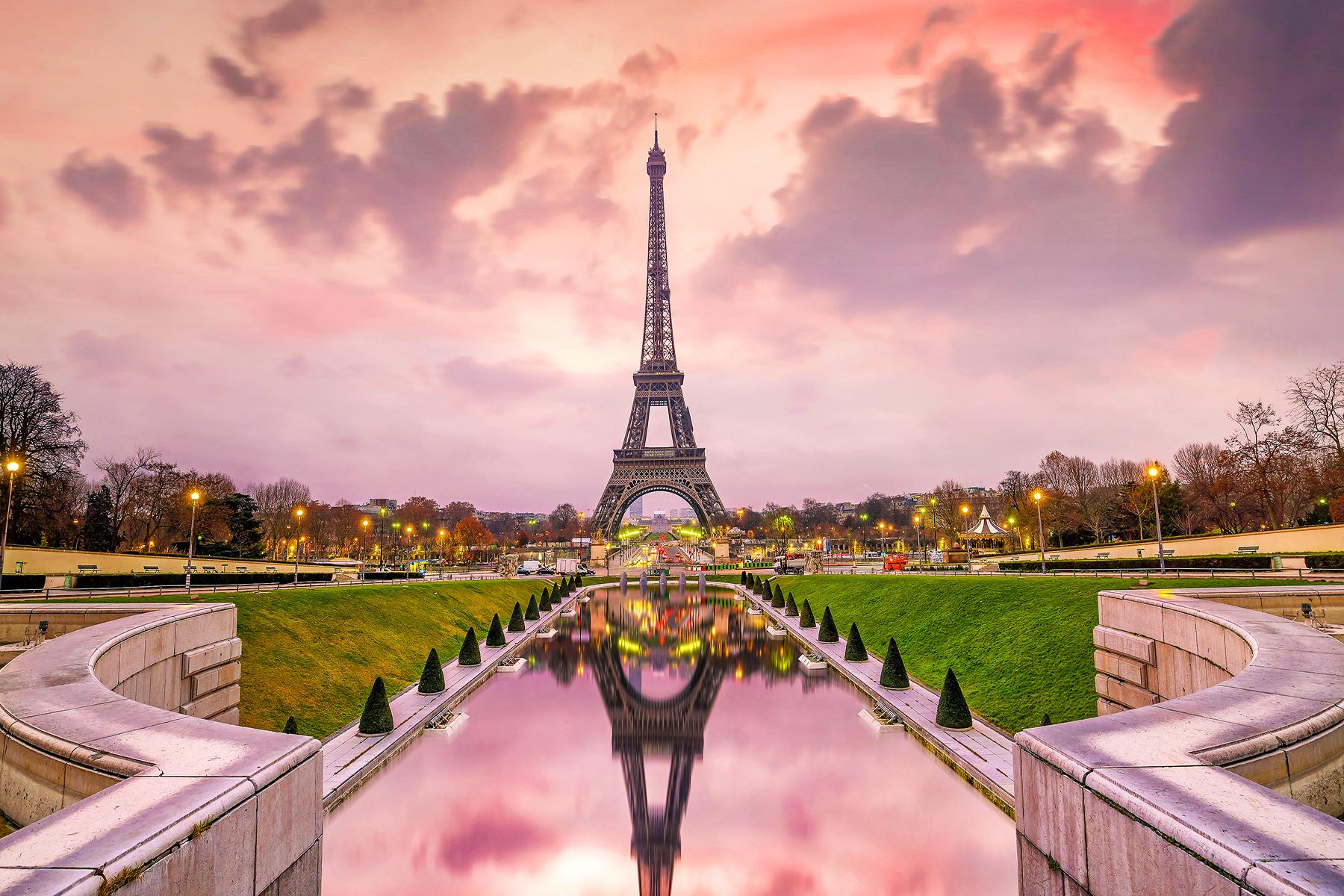 Is It True That the Eiffel Tower Has Been Painted Different Colors in the Past?

Eighteen. That’s the number of times the tower has been repainted—by hand. Since its construction, the Iron Lady has been dressed in a variety of different hues. When she was first introduced to the world, she wore a coat of red-brown. Throughout the years, she’s also been painted hues of yellow-ochre and chestnut brown. Today, she wears a coat of bronze paint. About once every seven years, a team of 25 painters strip, clean, rust-proof, and repaint the entire tower the old-fashioned way: by hand, with a rudimentary paint brush. It takes about 18 months, 60 tons of paint and 1,500 brushes to complete the job. 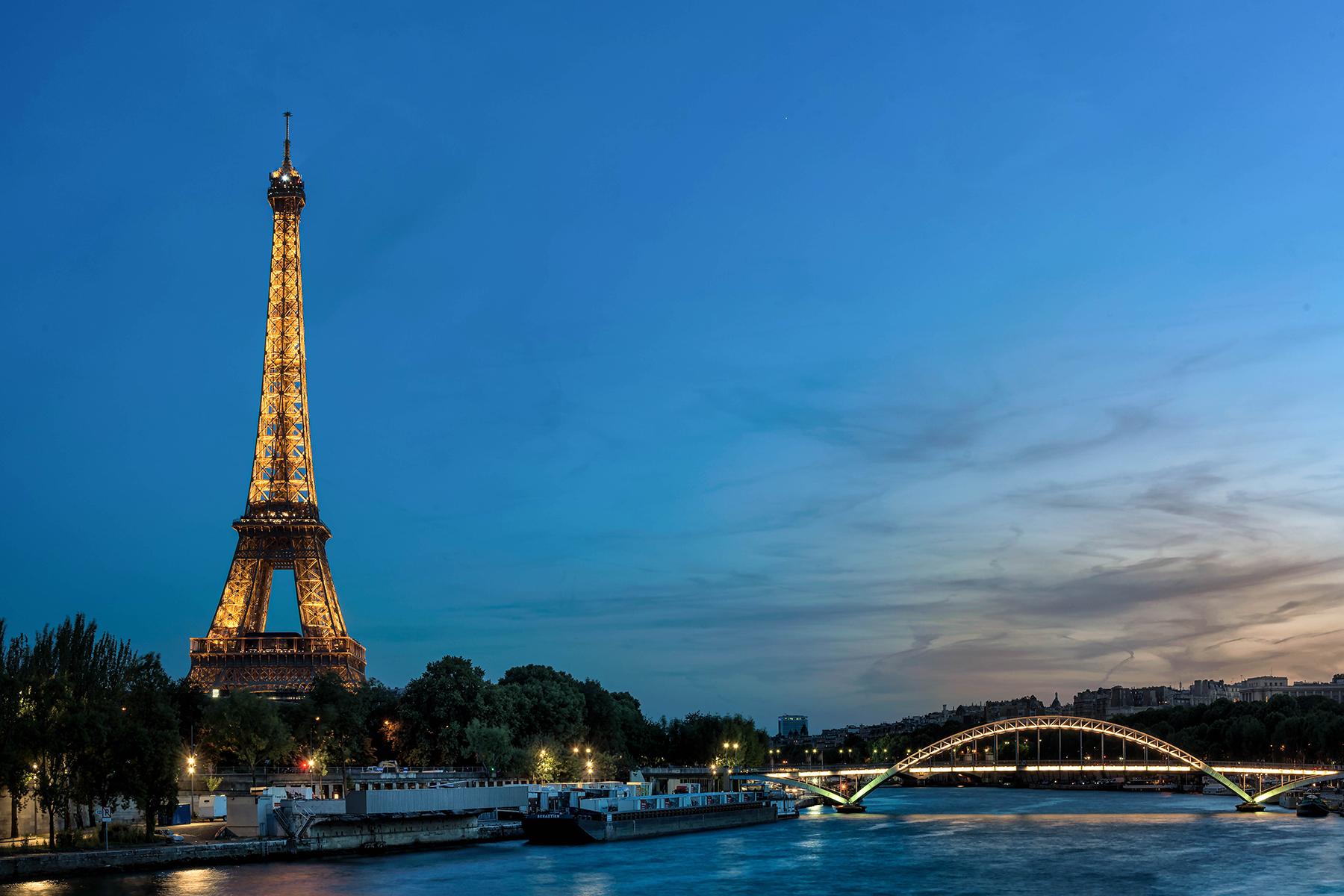 Is It True I Can’t Photograph the Eiffel Tower at Night? 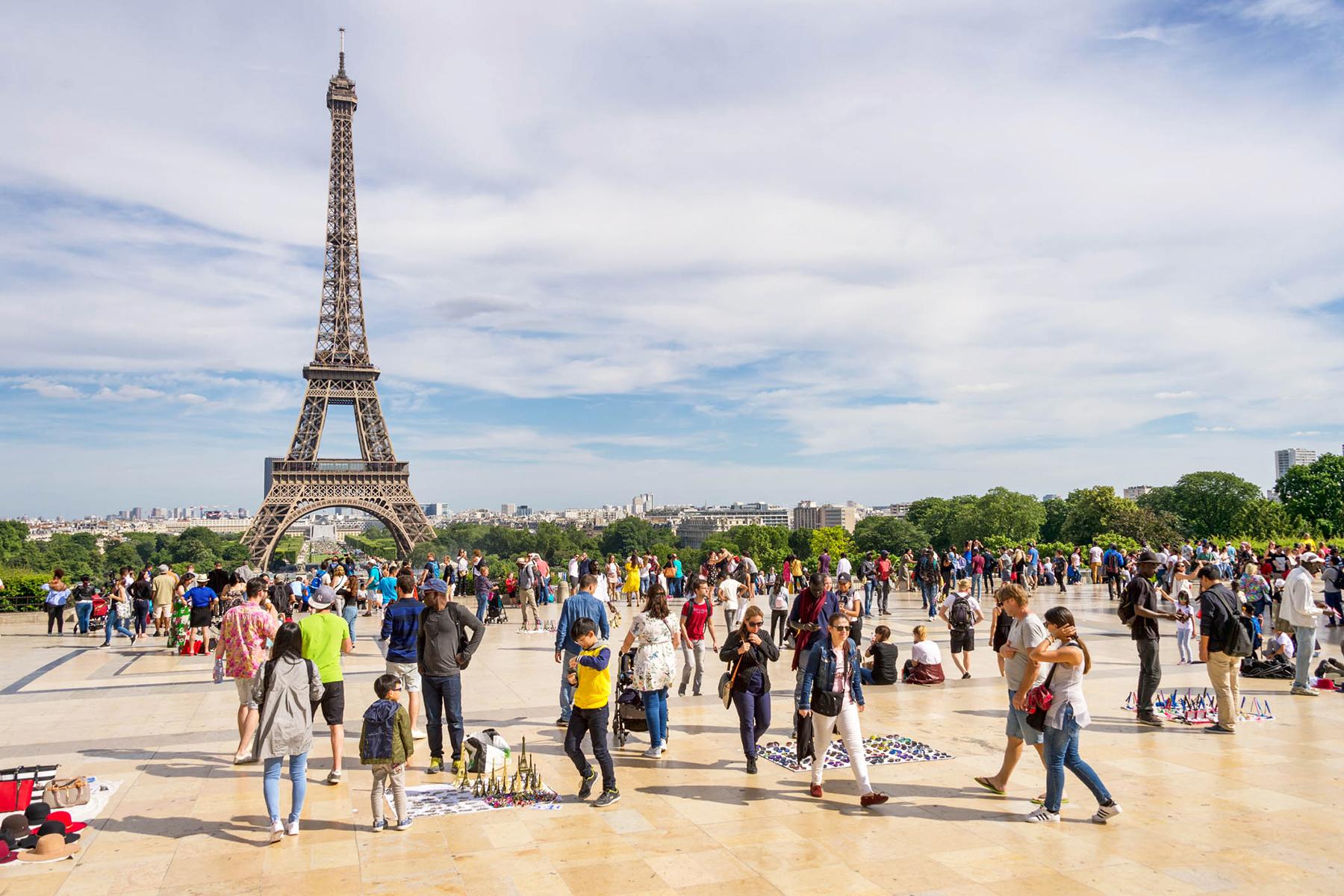 How Long Does a Visit Take?

It’s recommended that visitors allot an hour and a half for a trip to the first and second floors and two and a half hours for a visit to the top. Keep in mind that access to the third floor requires changing lifts. During peak season, that means more lines and wait times. 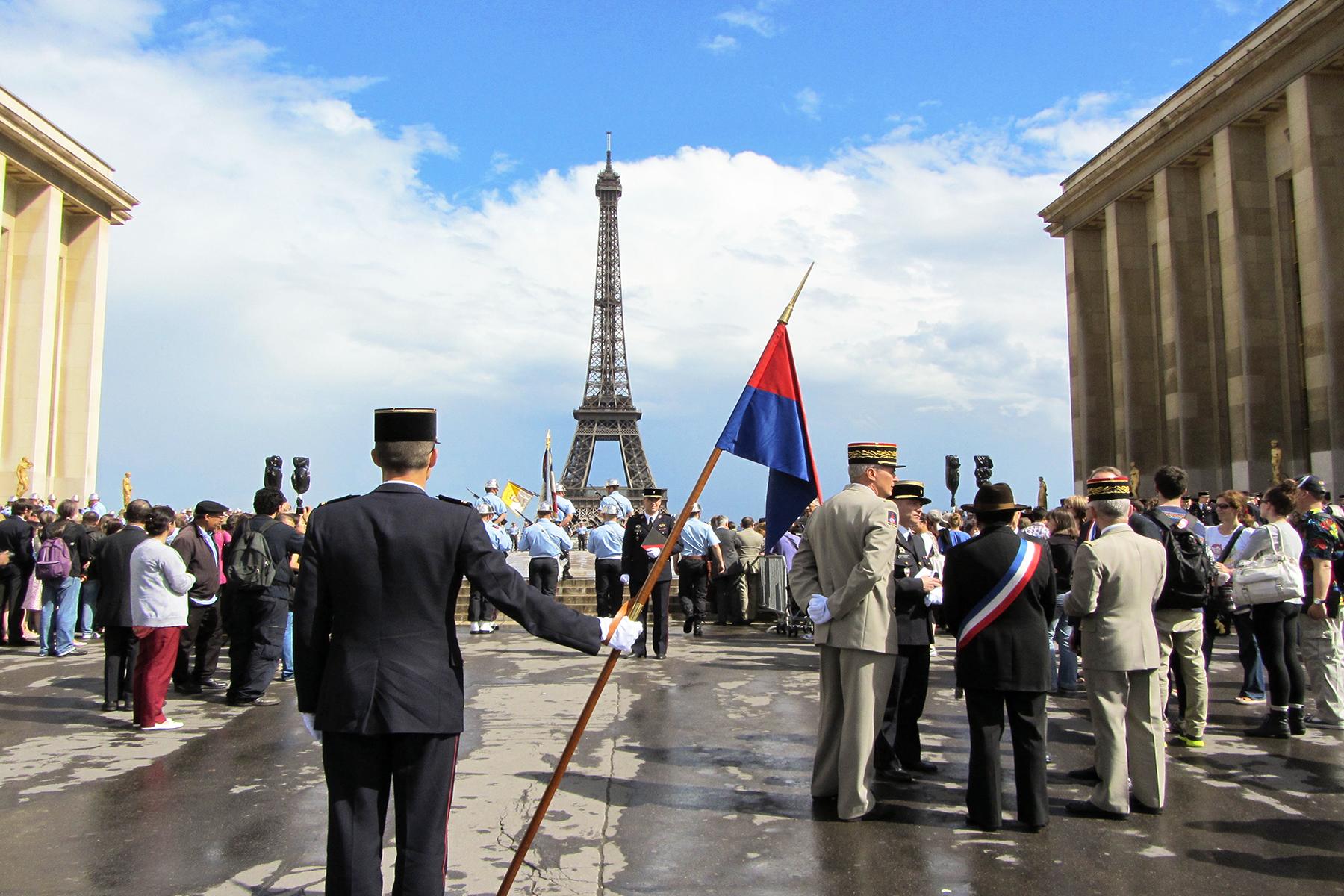 Are There Any Other Ways to Experience the Eiffel Tower Differently?

Over Christmas, the Eiffel Tower turns up the holiday spirit transforming the first floor into an outdoor ice rink and winter terrace, where visitors can sip on hot chocolate while taking in the views. Every spring, sporty types can sign up to an organized race held at the tower. The Vertical race challenges participants to sprint up the 1,665 steps which lead to the top. But it’s on Bastille Day, July 14, when the tower takes center stage for all of France. At nightfall, after a classical concert held at the foot of the tower, the Eiffel Tower becomes the epicenter of a dazzling fireworks show to celebrate France’s national holiday. 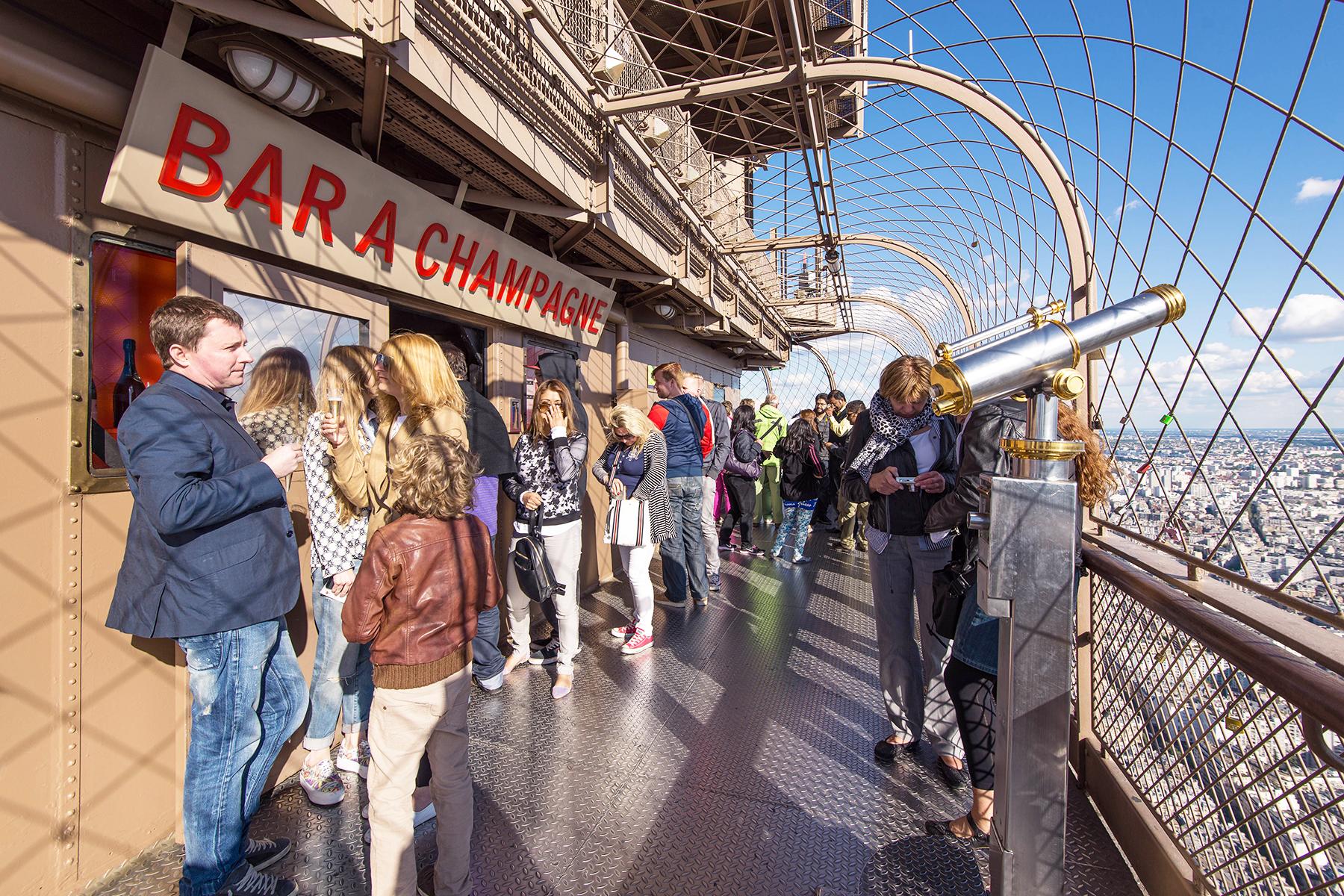 Is It Worth Shelling out Full Price and Going All the Way to the Top?

Along with the views, there are a few two big selling points for going to the top floor. There’s Gustave Eiffel’s office, restored to its original condition, complete with life-sized models of Eiffel and Thomas Edison, who visited the tower and offered Eiffel a gramophone as a gift. The third floor also houses a champagne bar. 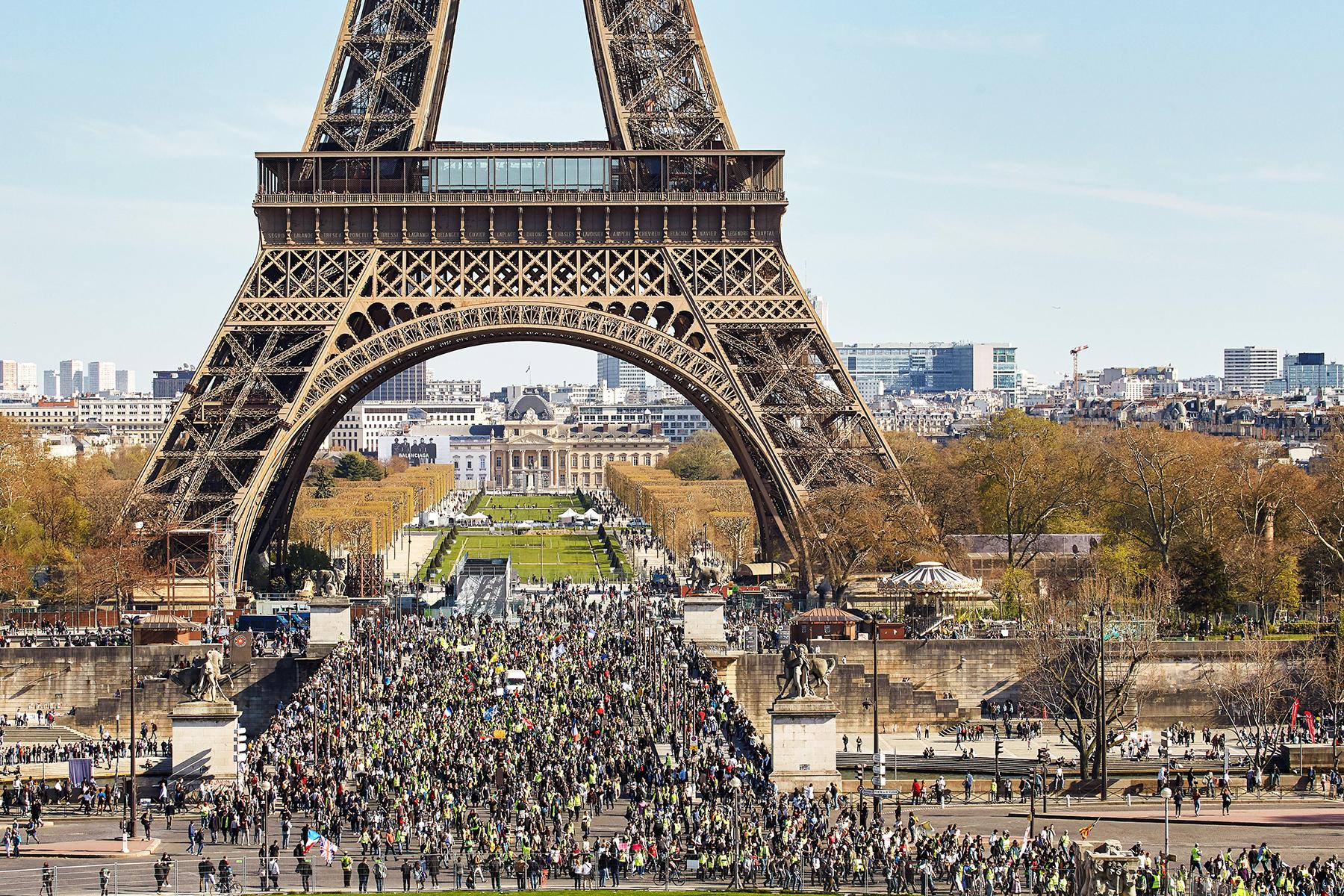 I Often Hear About French Strikes and Closures. How Do I Know My Visit Won’t Be Canceled?

The single best way to keep up to date on unexpected closures for security reasons or strikes is to follow their official Twitter account @LaTourEiffel, which posts updates regularly. 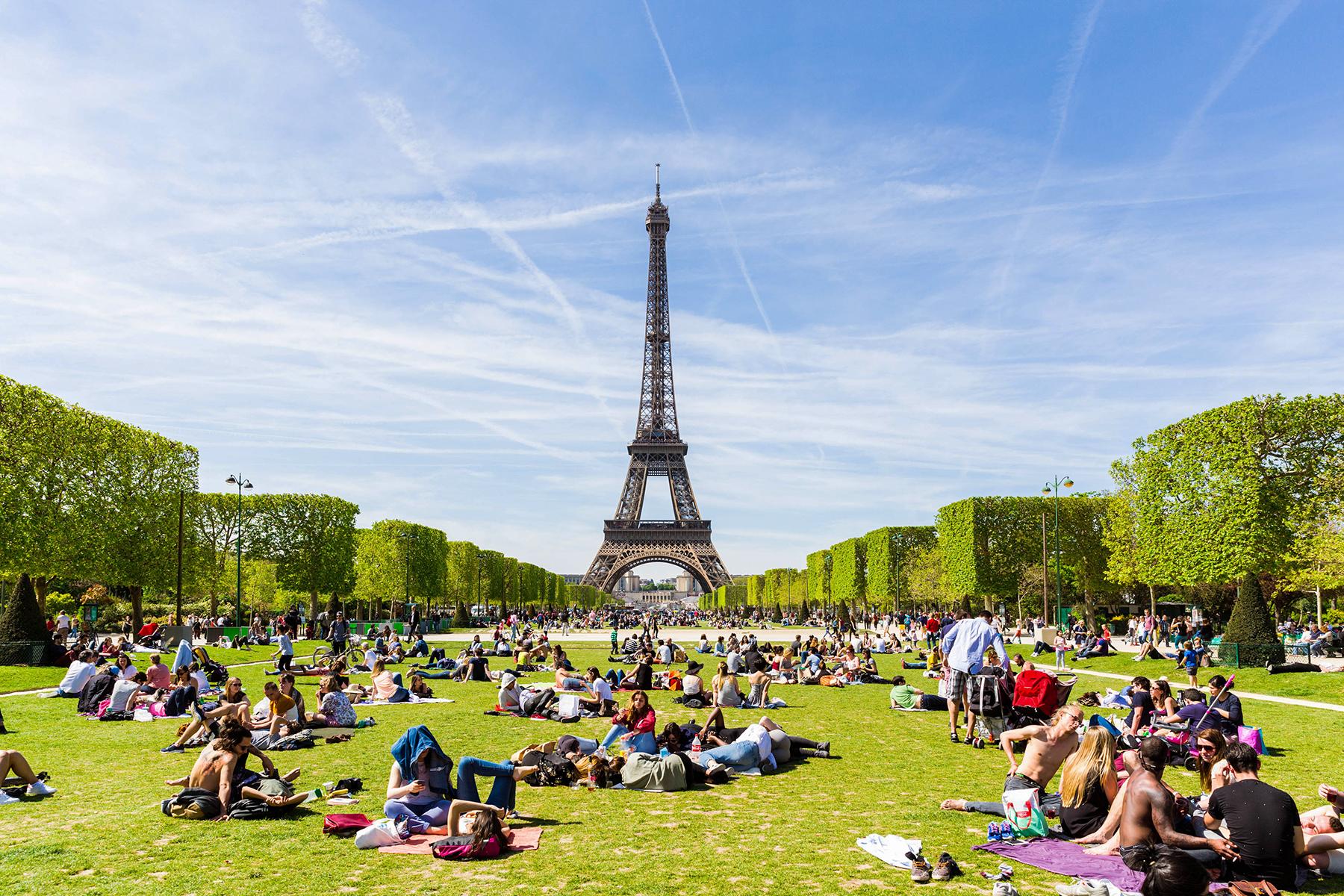 How Can I Experience the Eiffel Tower Like a Local?

Truth be told, many Parisians will tell you they’ve never actually gone up the tower. If they do make a trip to the site, it’s to lay out a blanket and picnic on the Champ de Mars, the vast open green space that lies in the tower’s shadow. A bottle of wine, good crusty baguette, assorted cheeses and meats, et voilà, you’ve got the Parisian ritual down pat. Families with young children may also be interested to know that the area has outdoor playgrounds.