If you’re in London over the U.K.’s August Bank Holiday, then Notting Hill is the only place to be—drink, dance, and eat your way through the city’s end of summer carnival party.

Originally launched in 1966 as a small festival celebrating the Caribbean community and promoting cultural identity, the Notting Hill Carnival has grown from just two bands playing to 500 hundred spectators to the sprawling street party it is today, attracting over 2.5 million people to the neighborhood across two days each summer. But while the numbers have increased, Notting Hill Carnival (or just “Carnival” to Londoners) remains true to its roots as a celebration of London’s diverse multicultural communities and there’s nothing quite like it. Here are just 10 reasons to check out Notting Hill Carnival.

Separate from the music itself, the sound systems are one of the best sights at Carnival. Inspired by the original homemade rigs popularized in Jamaica, the huge speaker stacks are the stuff of Carnival folklore, still providing a romantic link to the early DIY sound of Carnival. Set up on unsuspecting street corners around the Notting Hill route, the sound systems can be identified from streets away by their rumbling, booming bass that–if they’re doing it right–should have your legs wobbling before you reach them. Channel One, King Tubby’s, Saxon Sound, and Gaz’s Rockin’ Blues are a few of the classic systems to check out.

If being drowned in bass is of secondary concern behind the actual music, then be reassured that there’s a plenty eclectic line-up at Notting Hill Carnival to keep you moving all day. Anything from Soca, Reggae, Bashment, Dub, Ragga, and Dancehall to House, Hip-Hop, Disco, and Latin can be heard playing from the various Soundsystems, and there are also dedicated stages like the Powis Square Stage and Horniman’s Stage set up as marking posts on the route, with live acts regularly performing throughout the day (including the odd superstar surprise appearance).

It’s the Second Largest Street Carnival in the World

Given that millions of people squish into the relatively tight West London route, the sheer size of Notting Hill Carnival is an experience in itself. The largest street party in Europe, and second behind the Rio Carnival in the world, it’s an experience to get lost in–not literally, although that’s easy since cell service is totally blocked throughout the area–where one can simply appreciate being swept along in the feel-good atmosphere of a crowd of people who want to enjoy the same party vibes.

For the price of your Tube fare to Notting Hill, the myriad sights and sounds of Carnival are yours, which, in a city as expensive as London, is the kind of bargain not to be passed up. Performers, musicians, dancers, and plenty more volunteers give their time and talents free of charge for the love of Carnival, which is perhaps partly why the weekend retains such a warm, inclusive feel to it. FYI, while it will cost you nothing to attend, bring cash for food and drinks stalls so as not to stand in more 30-minute ATM queues than you have to.

The Food and Drink

As all storefronts, including cafes and restaurants, are boarded up around Notting Hill, duty falls to the wide array of street food stalls to satisfy the stomachs of the crowds–definitely a good thing. Expect a collection of Caribbean classics from jerk chicken to curried goat, spiced vegan curries, sweet and spicy plantain, roti, and rice and peas, that make picking and sharing the best way to enjoy a little of everything. Depending on spice levels, you’ll need a classic Jamaican Red Stripe lager to cool your tingling tongue, but better yet, look out for a refined rum punch served in an oversized beaker. Need something sweet? Go for a liquid dessert in the shape of a Guinness punch, a delicious concoction of Guinness stout, condensed milk, nutmeg, vanilla, and cinnamon. 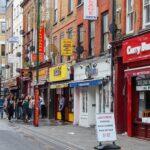 If the thought of seeing hundreds of people floating down Ladbroke Grove and Portobello Road dressed as flamboyant birds of paradise sounds like the sort of thing you need in your life, then the Parade is possibly the main reason to check out Notting Hill Carnival. But, if you want to see the parade, you’ll need a plan. The best way to be sure of a good view is to arrive early and find a base from which to let the kaleidoscope of colors, feathers, and exotic fabrics come to you; otherwise, chasing the floats and dancers can be a hiding to nothing. The parade usually begins at 10:30 am on both days and makes for the focal point of the whole weekend with the Mas Dancers (Masquerade Dancers) unleashing costumes on the public literally an entire year in the making. Floats carrying dancers and performers are soundtracked by onboard musicians banging out steady Calypso rhythms to shake you into Carnival mood.

It’s an Excuse to Dress Wildly

You can pretty much wear anything to Carnival and feel as comfortable as you would in your regular everyday uniform. Glitter, face paint, and feathers are some of the most popular adornments that you should consider as part of your look but by all means, go wild. Imitation is the sincerest form of flattery so use the Mas dancers as inspiration and go big.

Nowhere is the beauty of London’s cultural melting pot better represented than at Notting Hill Carnival, where diversity, community, and inclusion still find an important place amidst the partying. From the food to the music, the dancing to the costumes, Carnival is an amalgam of Caribbean culture, contemporary and classic, that has evolved to lend it an unmistakable London twang that visitors will soon feel having been swamped in Carnival madness for a few hours.

If there’s one sound that defines Carnival it’s that of the many steel bands who seem to go non-stop for the entire weekend. Some steel bands have up to 100 musicians performing in unison and, like the Mas dancers, the rehearsals will have been running throughout the year to get the sound down for Carnival weekend. The bands play all sorts of classic Calypso alongside steel drum covers of the summer’s biggest hits.

It Has a Family Day

Sunday is Family Day at Carnival, which means the streets are traditionally a little quieter and the entertainment along the route has a kid-friendly slant to get children involved in the action, which can mean anything from dressing up in extravagant feathered headpieces to getting hands-on with the steel bands. Parents wary of the crowds should be reassured that plenty of families attend Carnival (on both the Sunday and Monday) and that, provided you arrive prepared, the only difficulty you might encounter is in convincing little ones that queuing for the toilets is part of the fun.