Visions of Korea conjure futuristic skyscrapers, bustling cities, and a spiderweb of efficient transit. But did you know that Korea also contains awe-inspiring natural wonders?

South Korea is a place of wide-ranging elements on a relatively small peninsula (about the size of Maine), where a tech-forward population races to the future, showcased in incredible buildings and modern infrastructure. But the grandeur of its natural landscapes eclipses even its most advanced feats of modern creation. In fact, on one tiny island just south of the cape, the island of Jeju, designated one of the New Seven Wonders of Nature in a 2011 global poll, flaunts an abundance of unusual landscapes, pristine scenery, and natural phenomena. 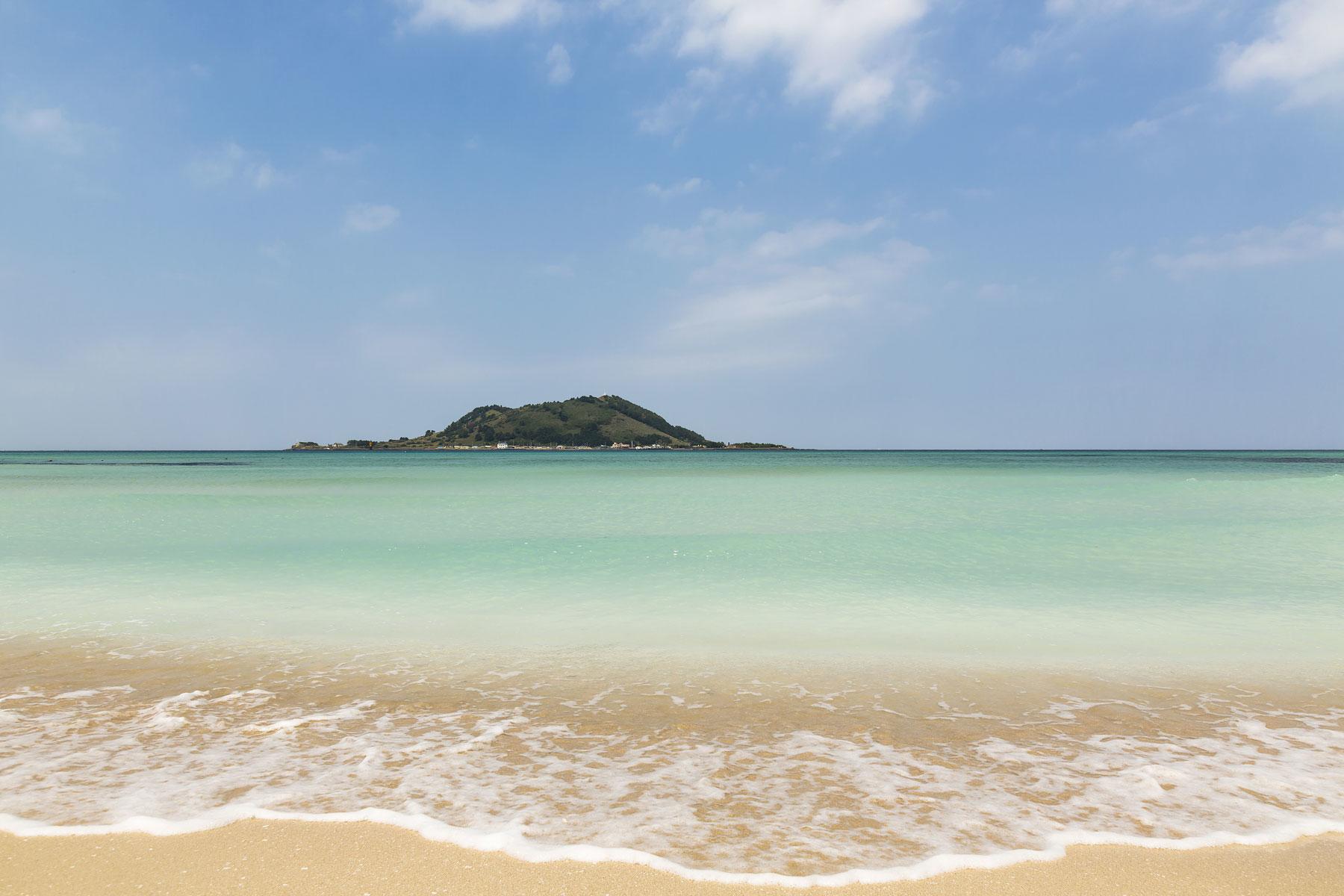 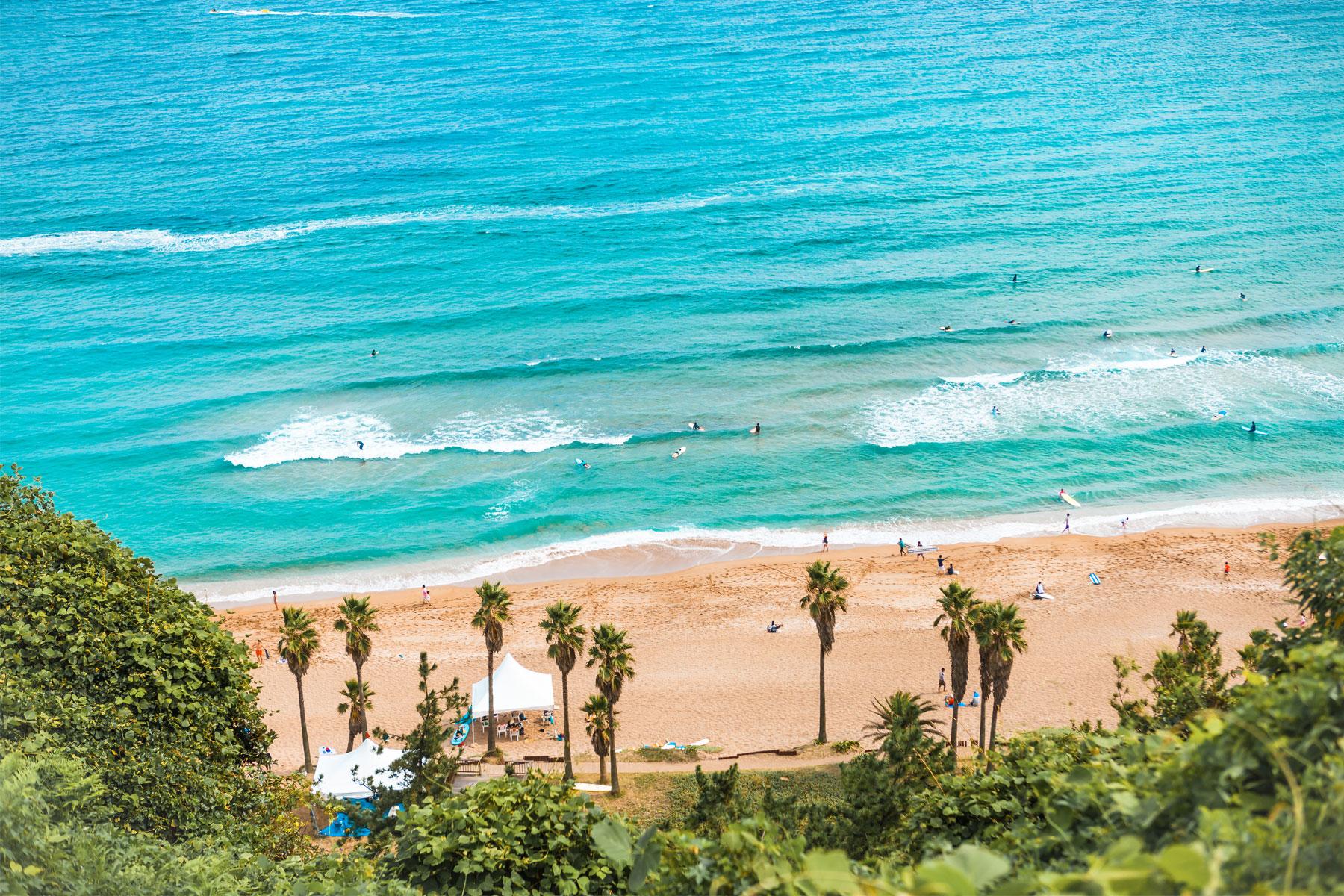 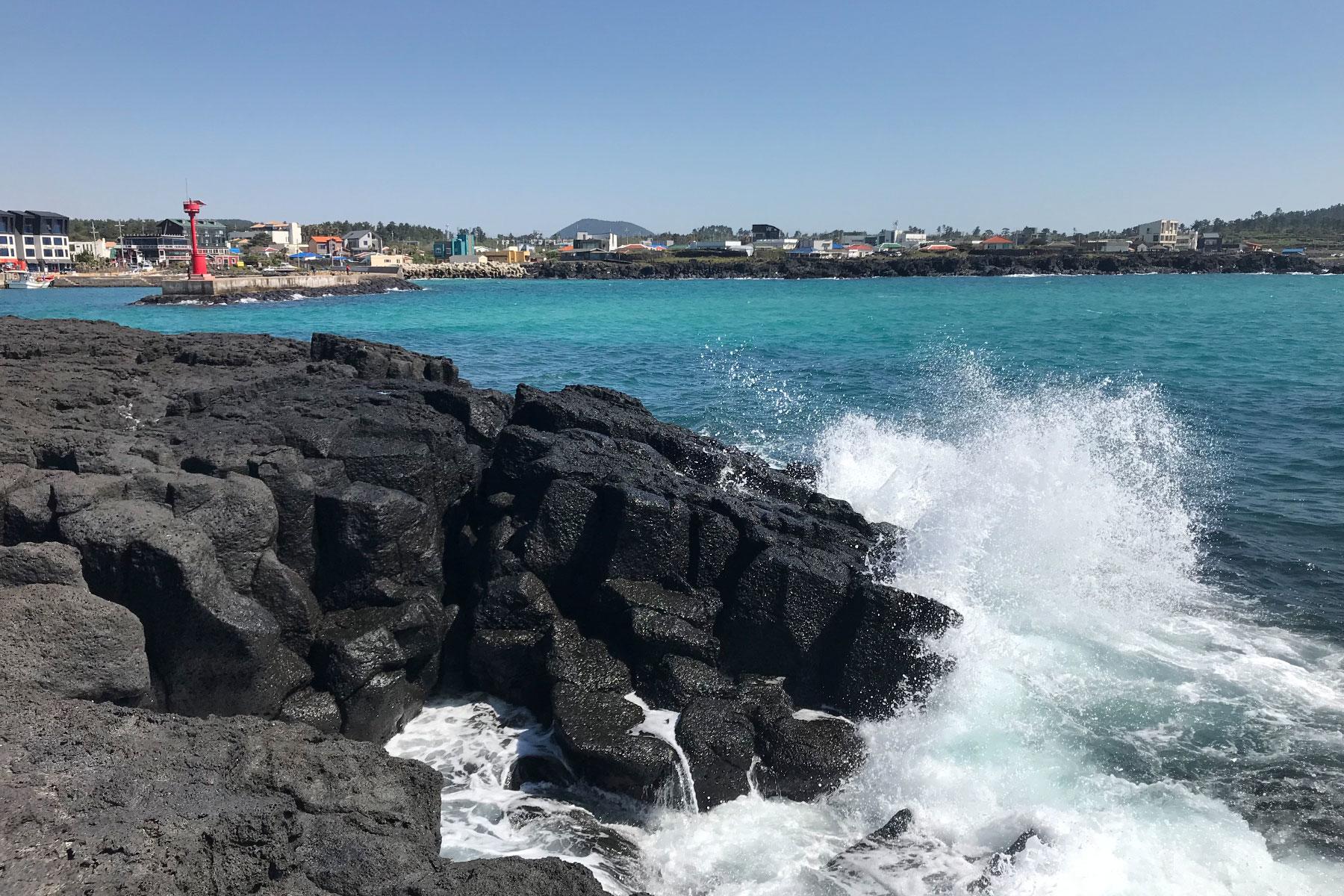 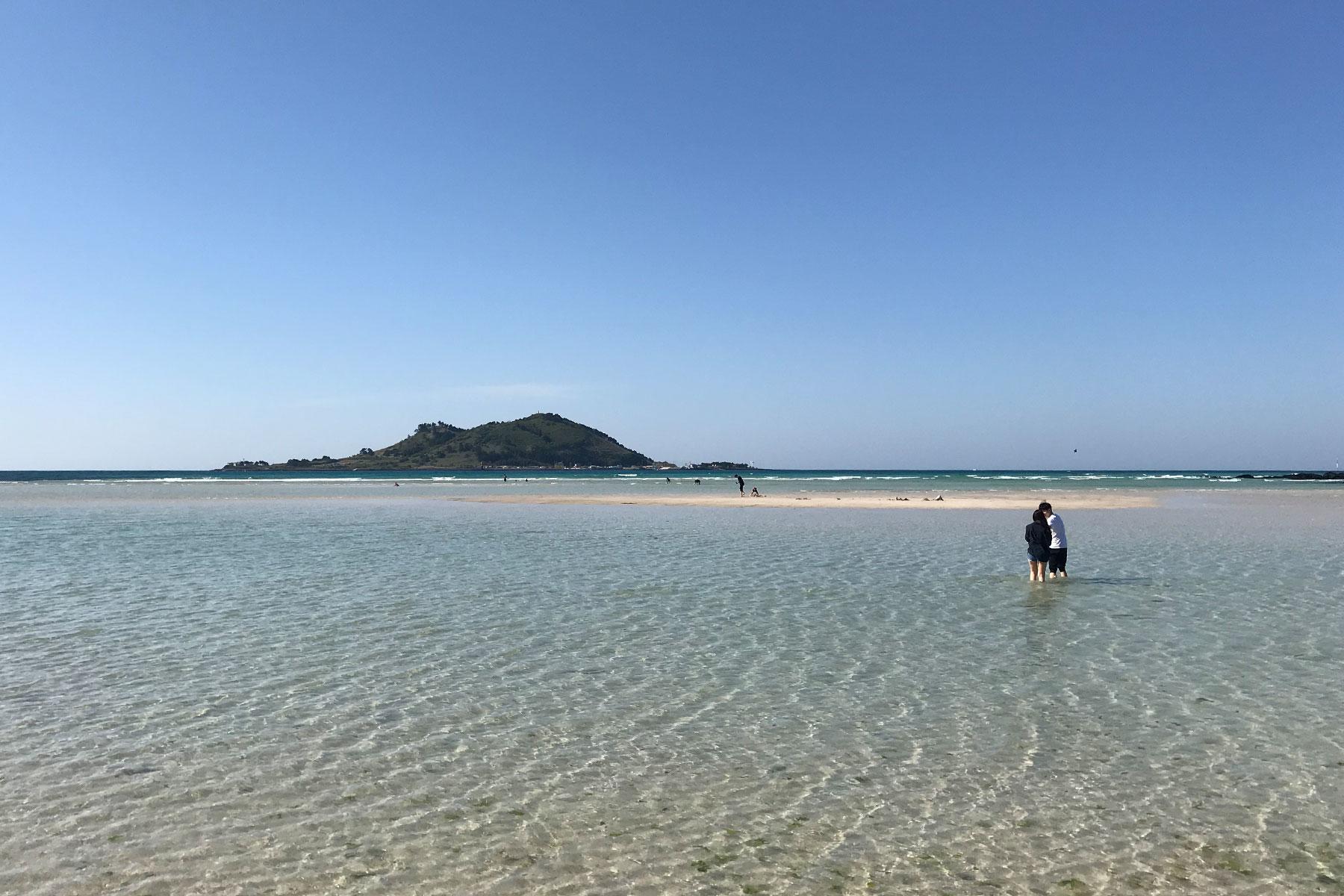 PHOTO: Rachael Levitt
Previous Next
1 OF 10

Who would have expected aquamarine ocean and a sandy beach that extends hundreds of feet into the shallows, with waters that hover at a balmy 70 degrees in the summertime? From Hyeopjae Beach, you might imagine you could walk the sandbar all the way to Biyangdo Island (less than three kilometers), a relatively young island at approximately 1,000 years old, which floats unassumingly in the distance. 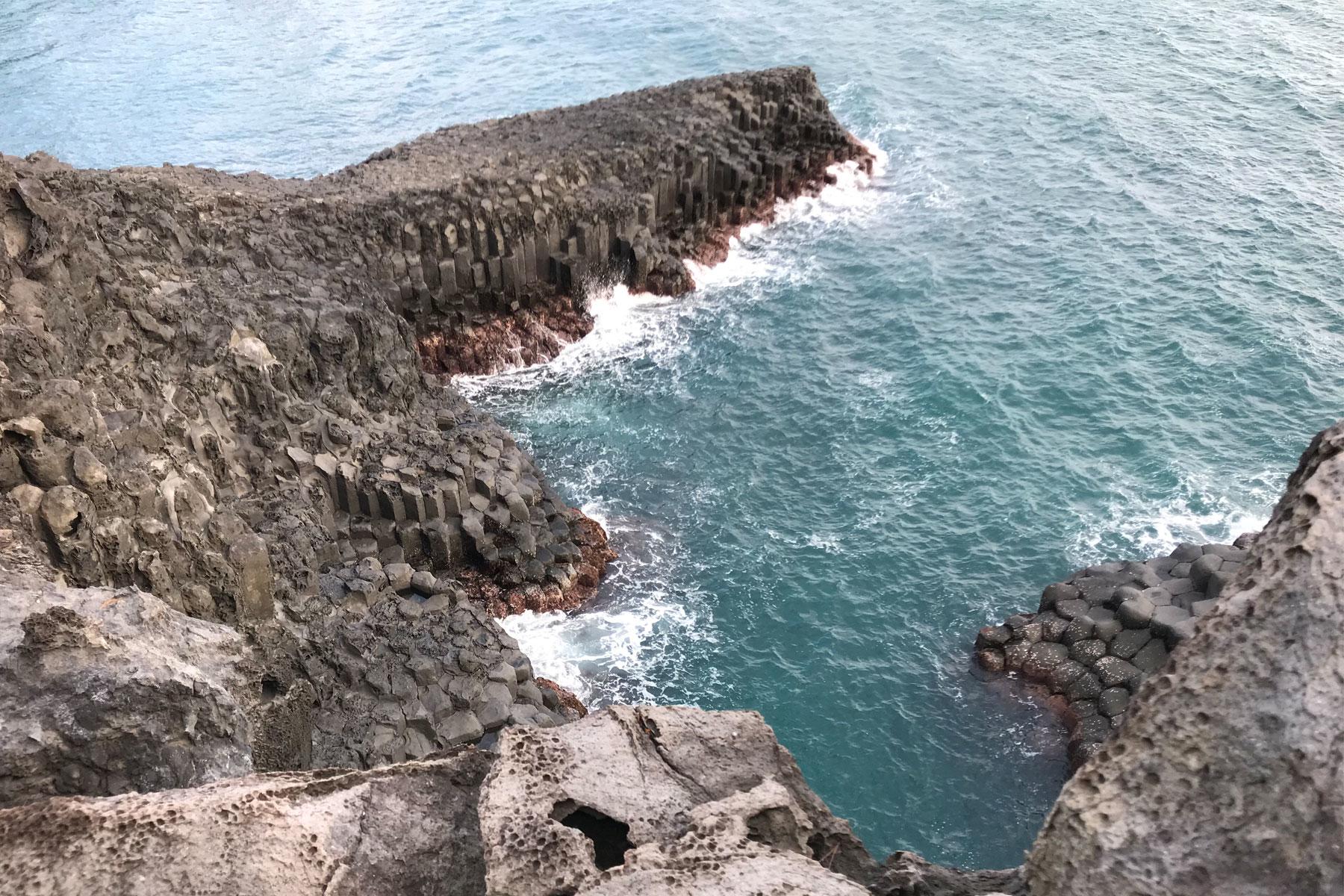 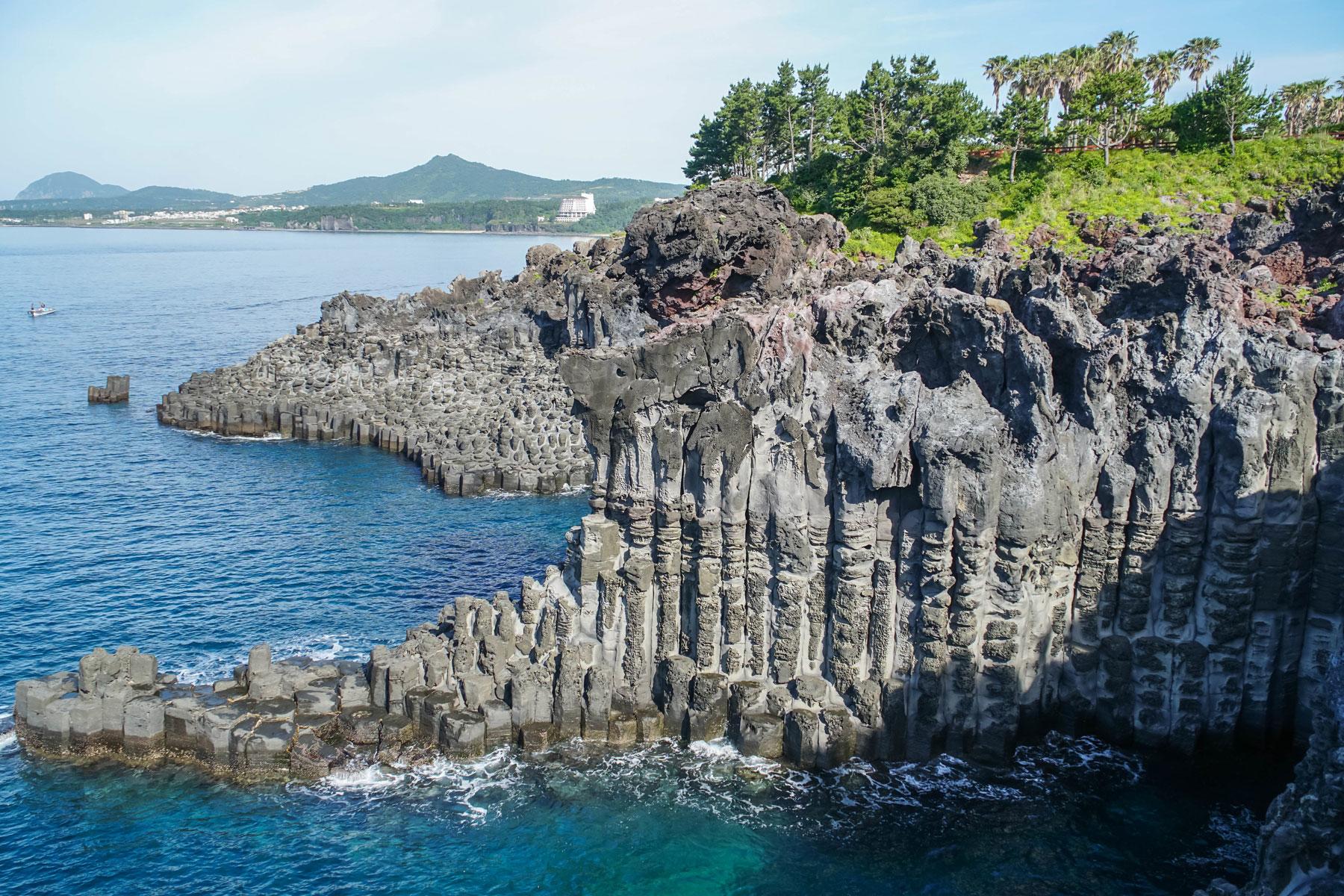 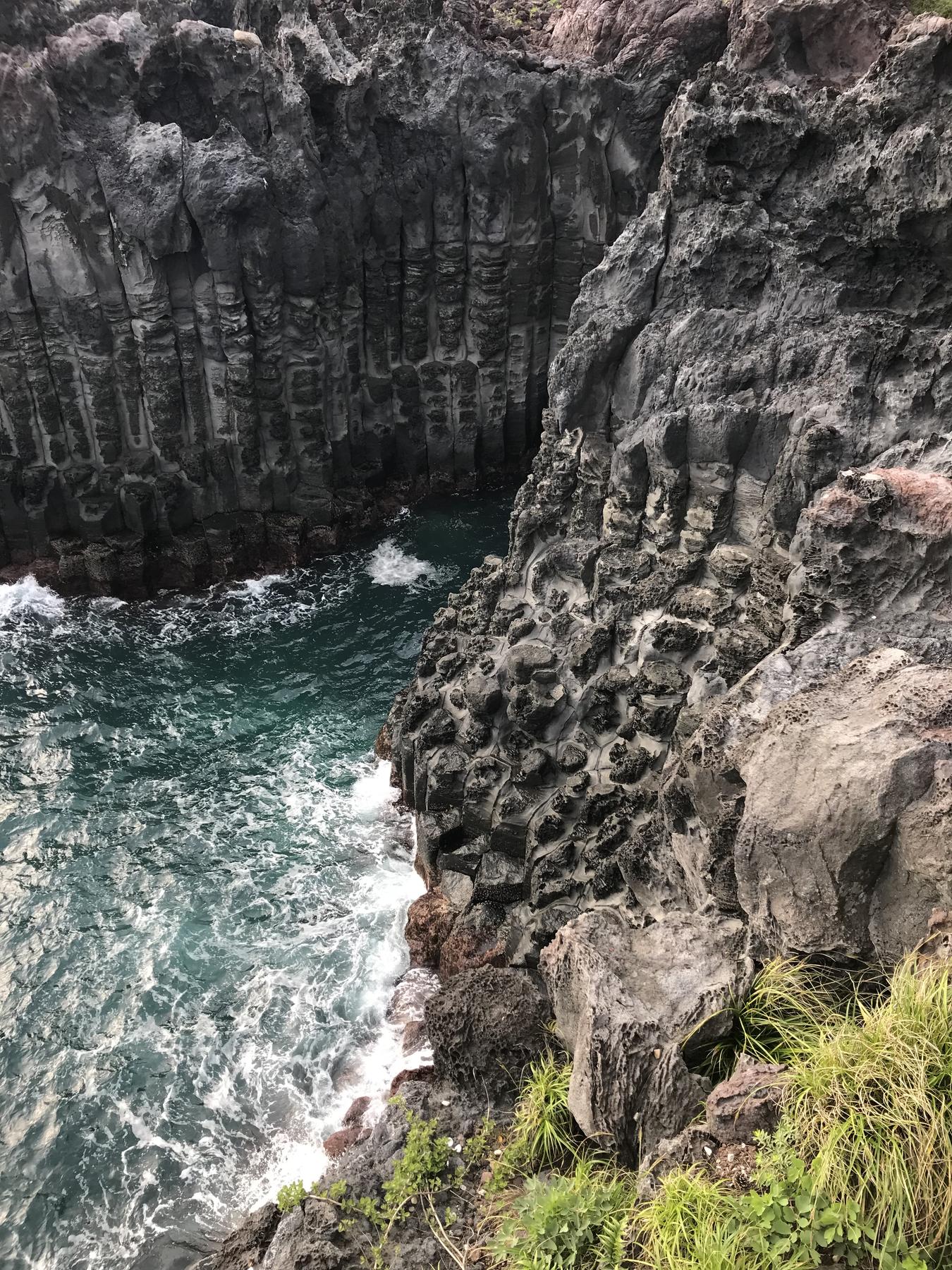 PHOTO: Rachael Levitt
Previous Next
2 OF 10

These aren’t your run-of-the-mill cliffs that dip into the Jisatgae Coast. Stone formed by lava from the eruption of Hallasan volcano shaped these edges into numerous, perfectly formed hexagonal pillars of various sizes. How did nature sculpt so perfectly? Columnar Jointing is a fascinating scientific process involving magma and its cooling condition, but I am not a scientist. It’s not a requirement. Just don’t miss this geometrically-inclined precipice. 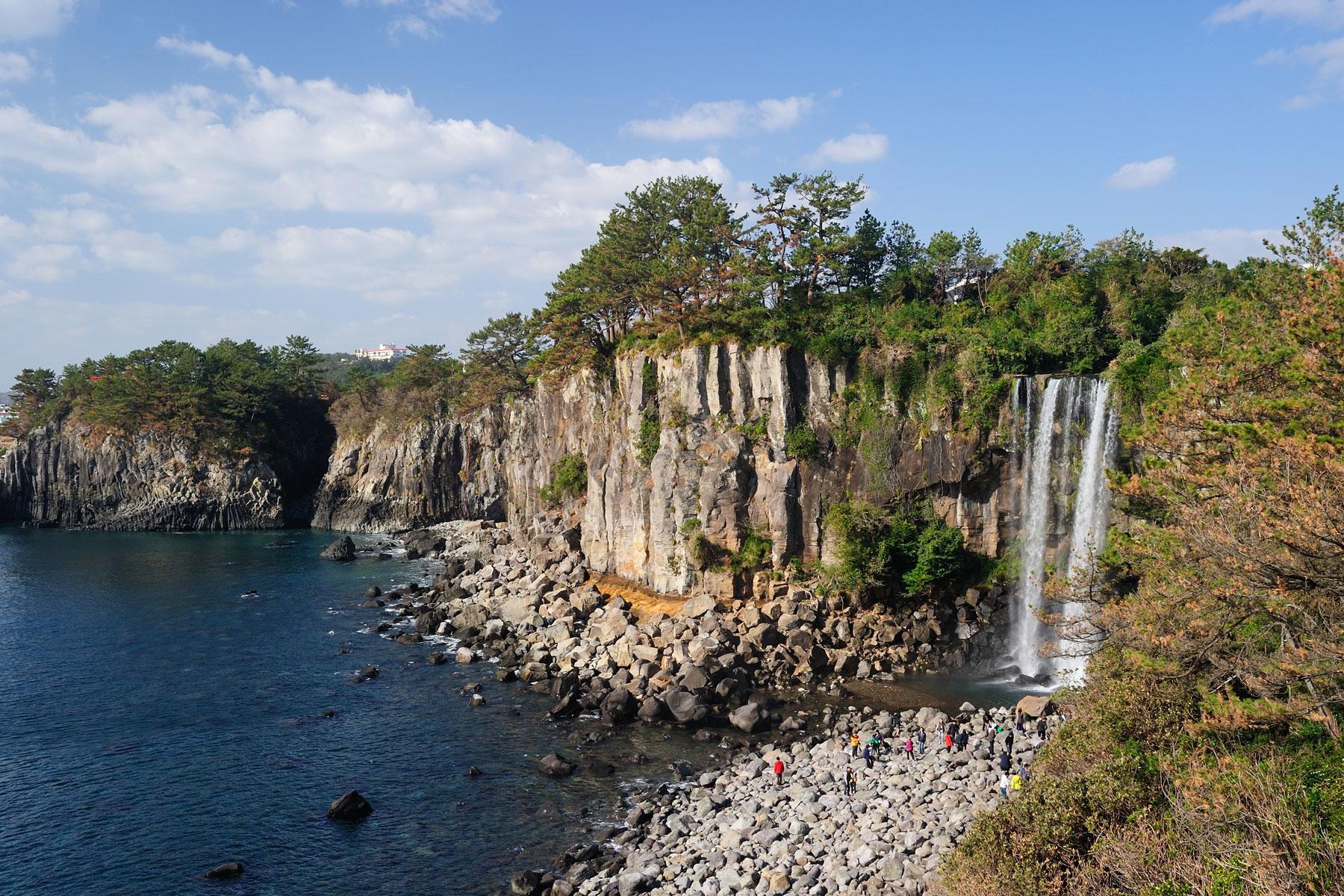 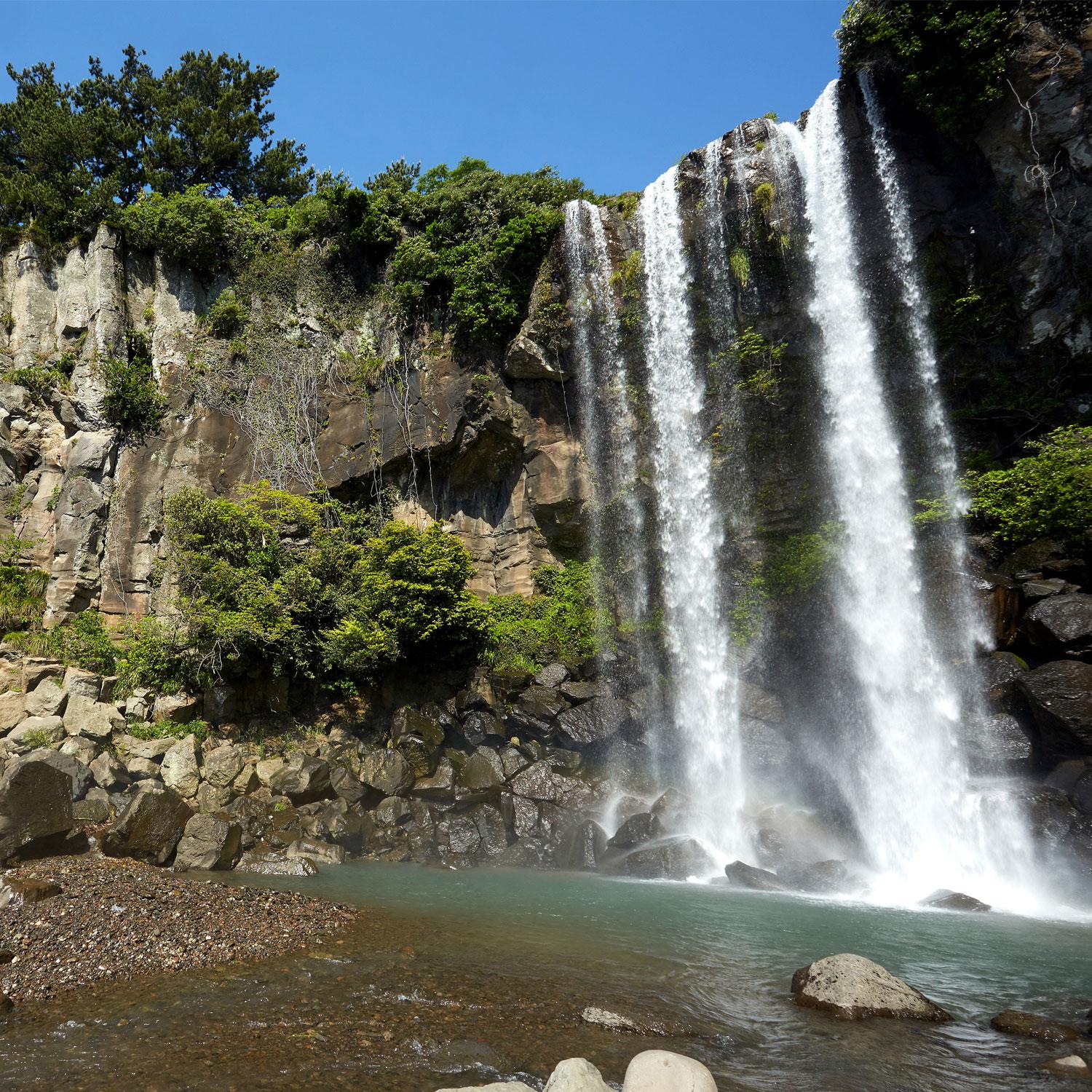 PHOTO: By photo_jeongh/Shutterstock
Previous Next
3 OF 10

This unmissable natural spectacle is a waterfall that empties onto a beach. On this rocky coast, you’ll find  Jeongbang Falls tumbling over rocks and boulders as it floods a gentle cove and spills into the ocean. At 75 feet tall, the rush is impressive and the mist reaches far. For those seeking even more cascades, Sojeongbang Waterfall, mighty in its own right, lies just 300 yards east. 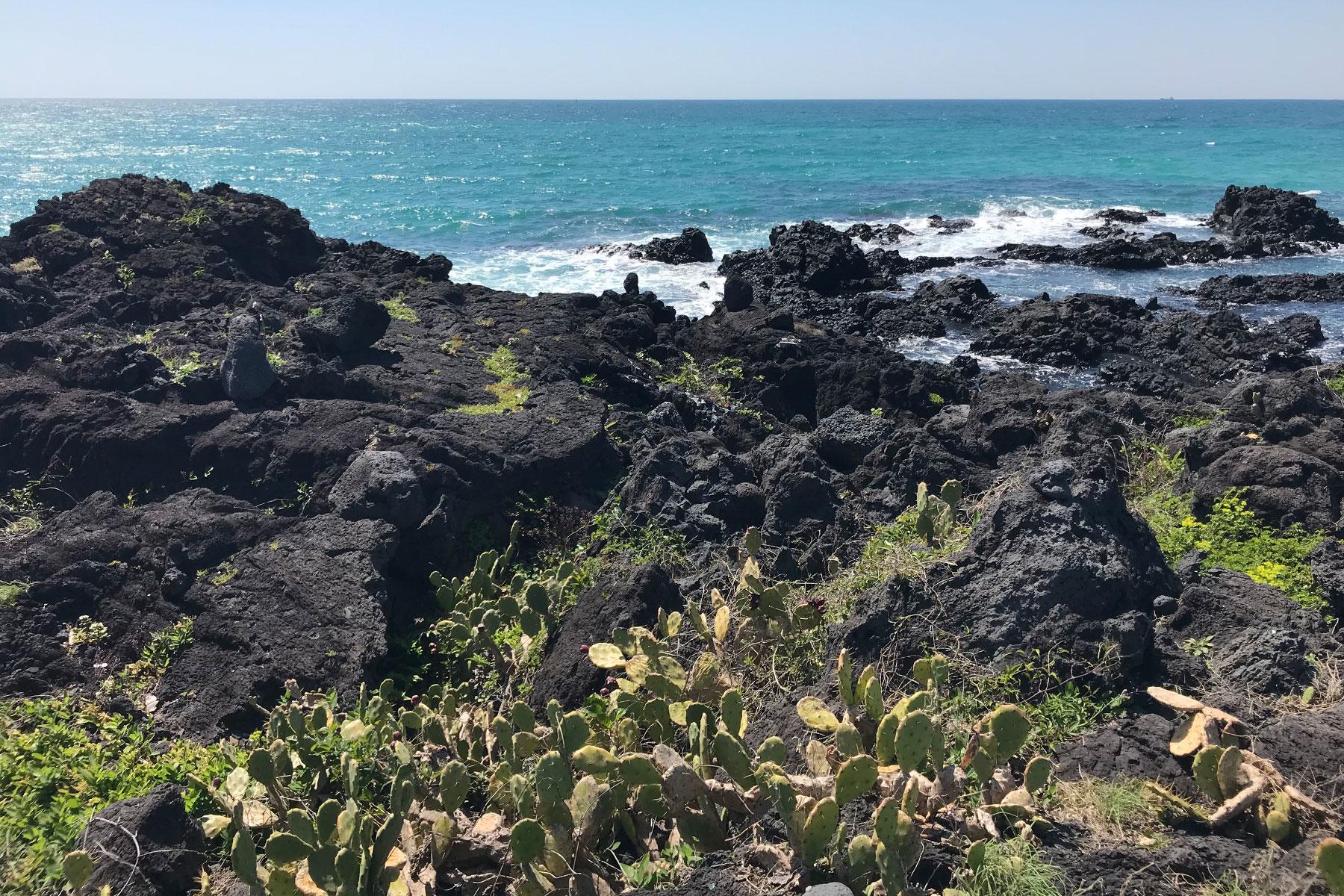 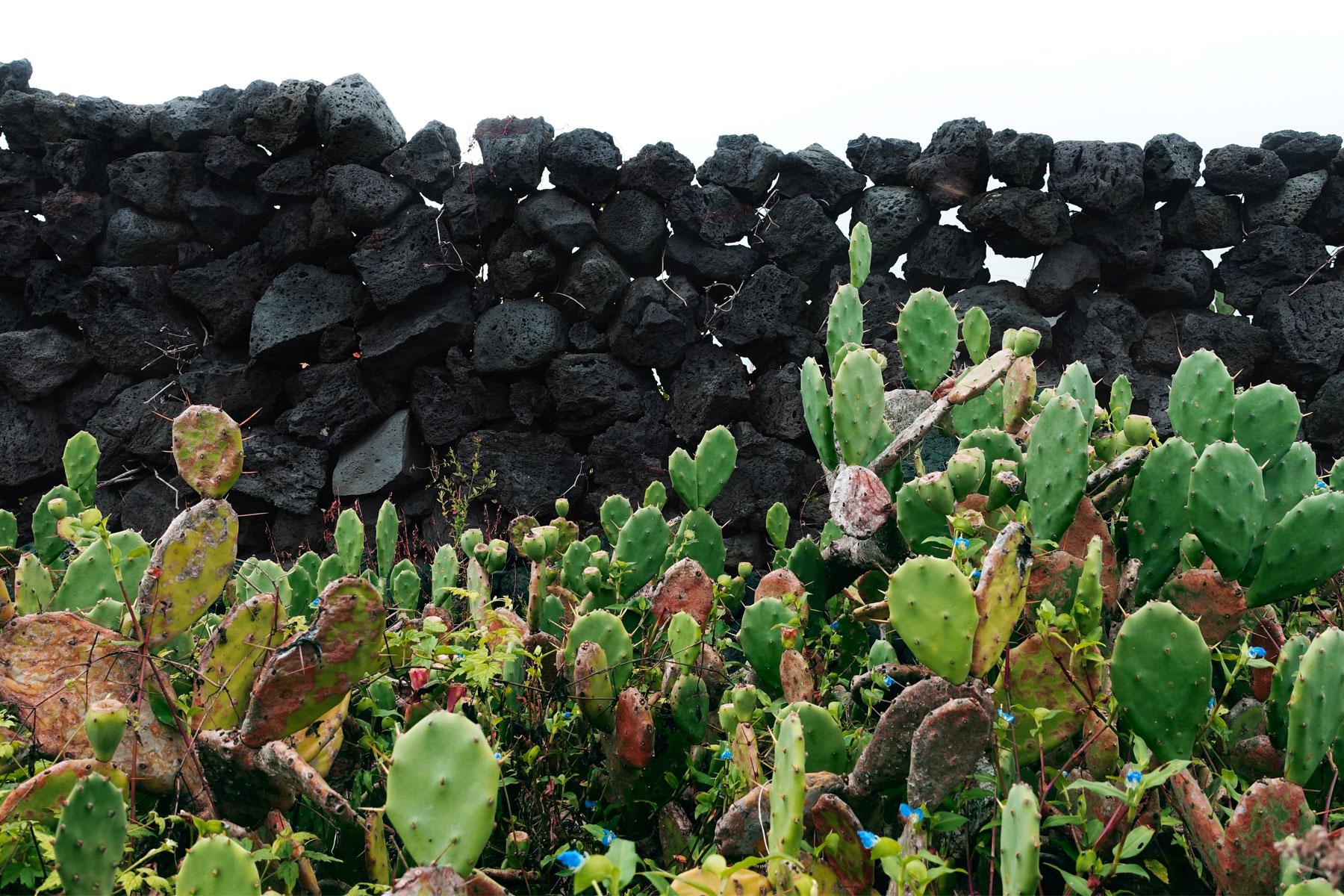 PHOTO: soy.kim/Shutterstock
Previous Next
4 OF 10

Wait—now Korea is full of cacti, too? What’s going on here?

This spiky garden extends from an adorable residential area of Wollyoung Seoninjang Village to the boardwalk running along the coastline. This varietal of cacti—opuntia ficus-indica—is not native to Jeju, and its arrival to the island remains a mystery (its possible that the seeds drifted across the Pacific Ocean from Mexico on the Kuroshio current). Either way, these spiky succulents bloom in the summer with purple fruit and yellow flowers.

INSIDER TIPThe best way to see the cactus grove from start to finish is on Jeju Olle: Walking Trail 14. 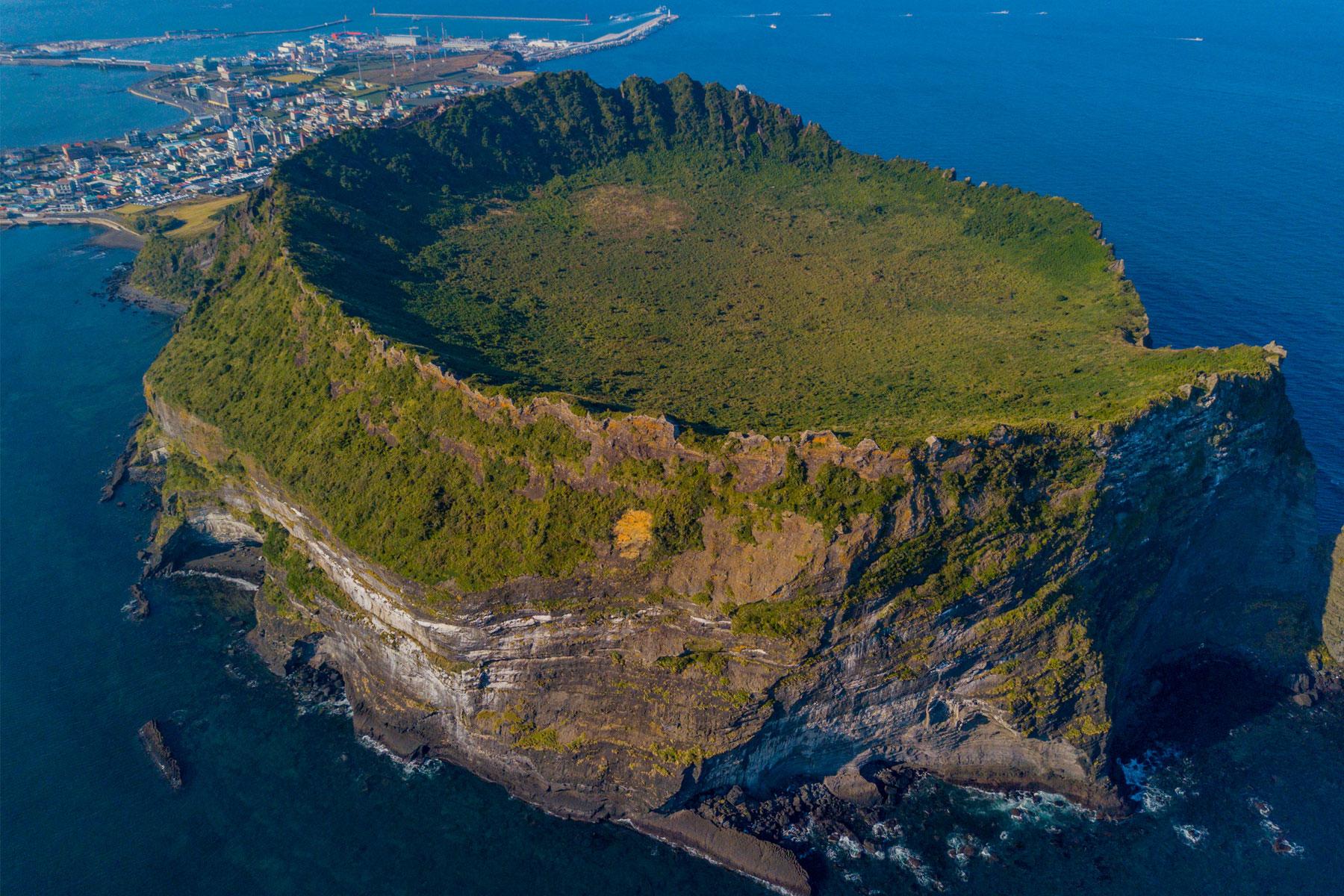 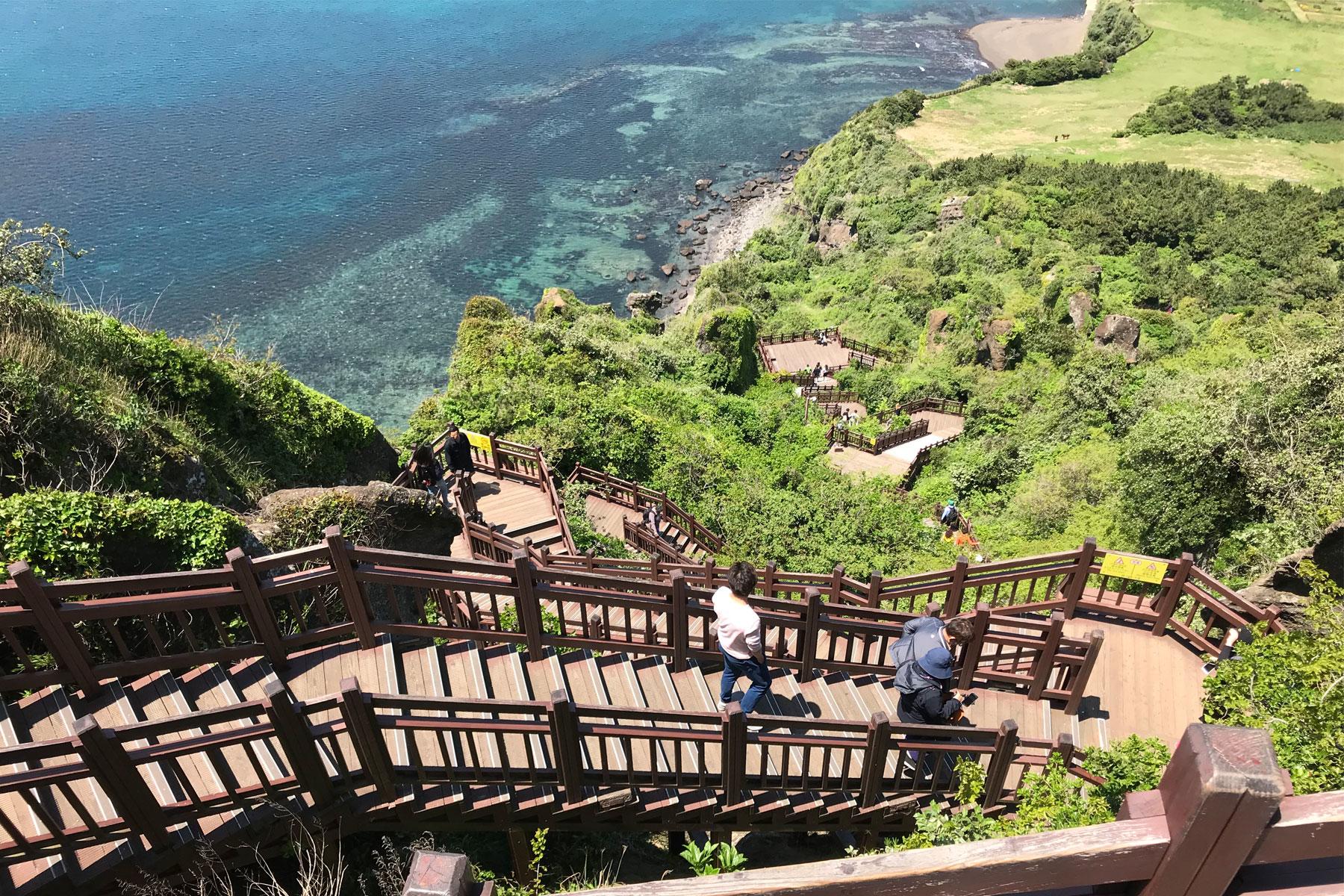 PHOTO: Rachael Levitt
Previous Next
5 OF 10

Designated a UNESCO World Heritage Site and nicknamed “Sunrise Peak,” this delightful summit is the result of a volcanic eruption 5,000 years ago. Instead of forming a typical apex, the mountaintop puckers into a surprisingly fertile concave crater. Spires of rock line the bowl, creating a natural crown around the vibrantly green grass center. The relatively moderate and accessible hike to top (uneven steps, railings) provides an opportunity for many visitors to take in stunning views of the island harbor, Jeju, and the unique basin peak. 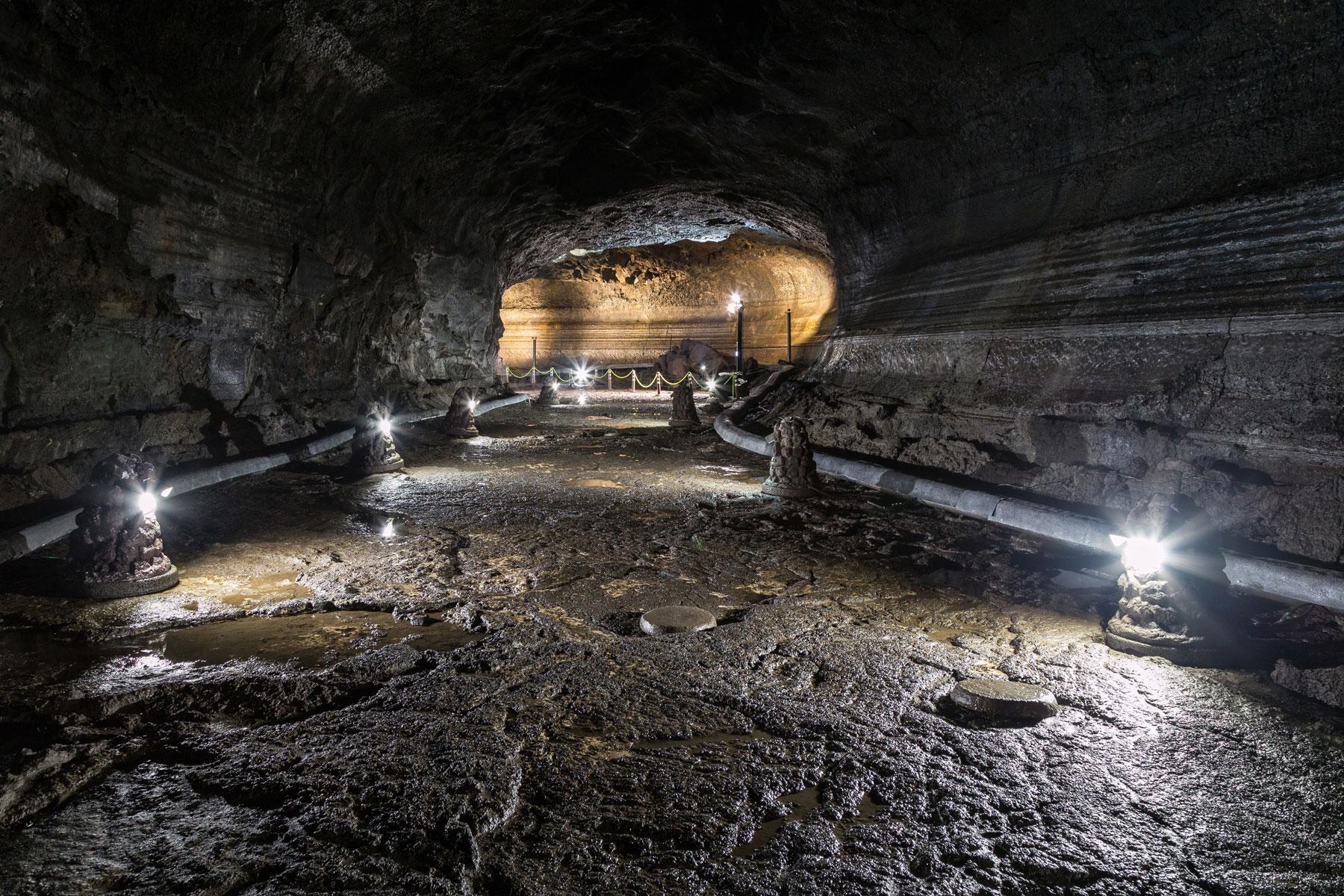 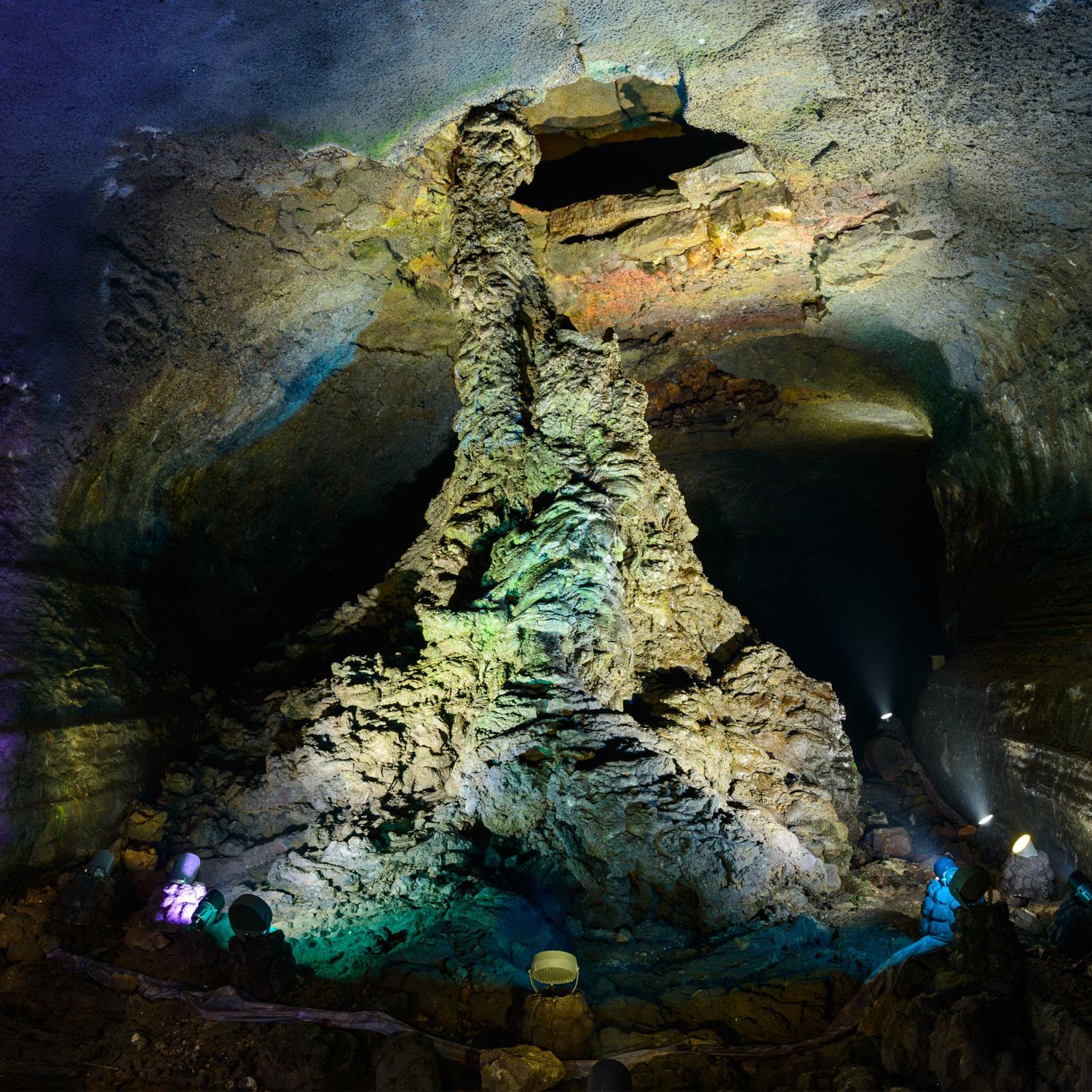 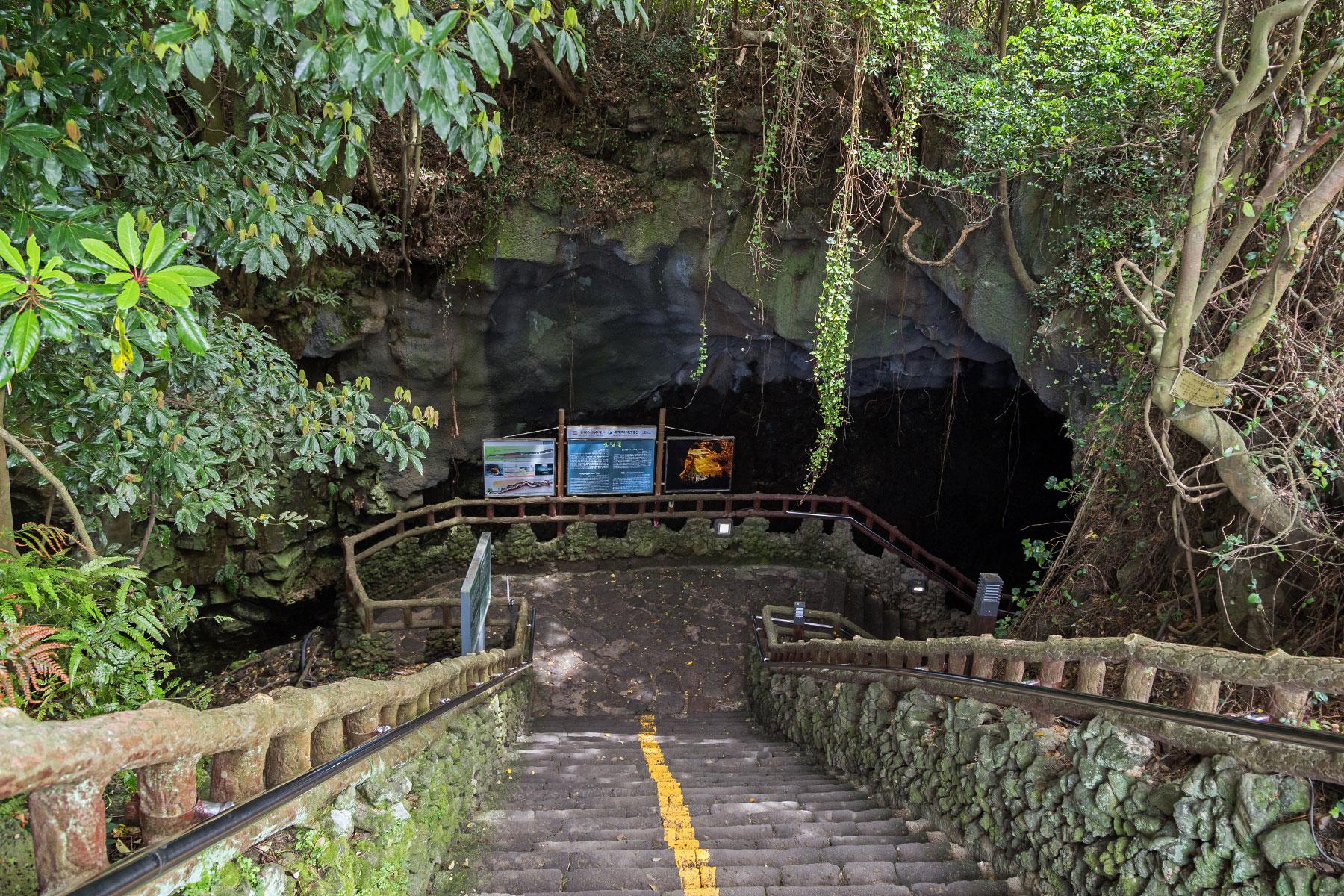 PHOTO: Tuomaslehtinen | Dreamstime.com
Previous Next
6 OF 10

In another fascinating instance of science-sculpts-nature wonder, lava tubes are formed when volcanoes erupt in channels. The channels stay hot while their walls cool and crust over. At the end of the eruption, the lava in the tube drains away, and that leaves eerie hollow cave-tubes. Weird! Go explore the 12th longest lava tunnel in the world at Manjanggual Lava Tube. All sorts of cave formations are perfectly preserved—standards like lava stalactites and stalagmites as well as funky lava bridges, rafts, benches, and shelves. Check out the 30,000-strong bat colony in Entrance 2. 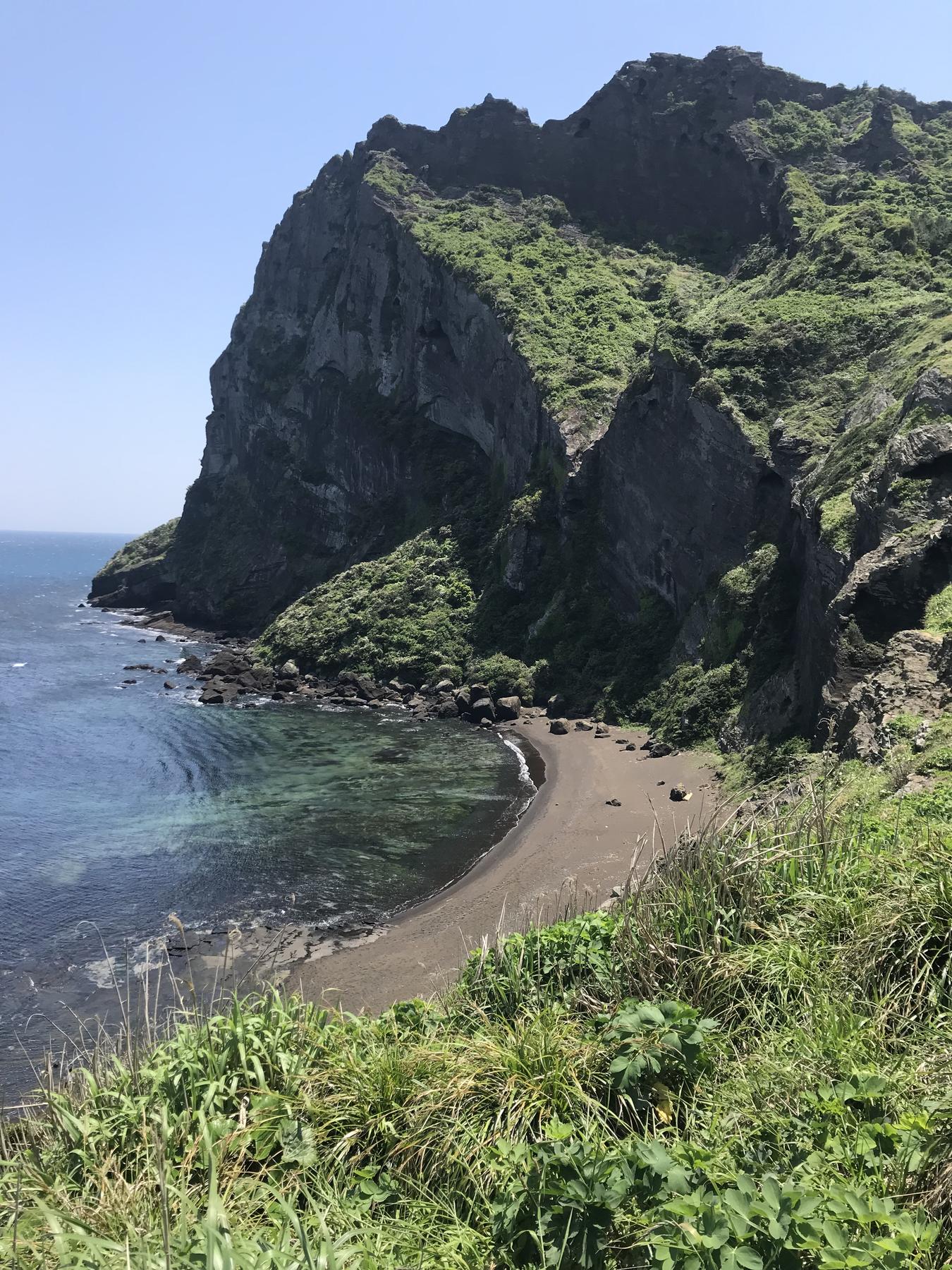 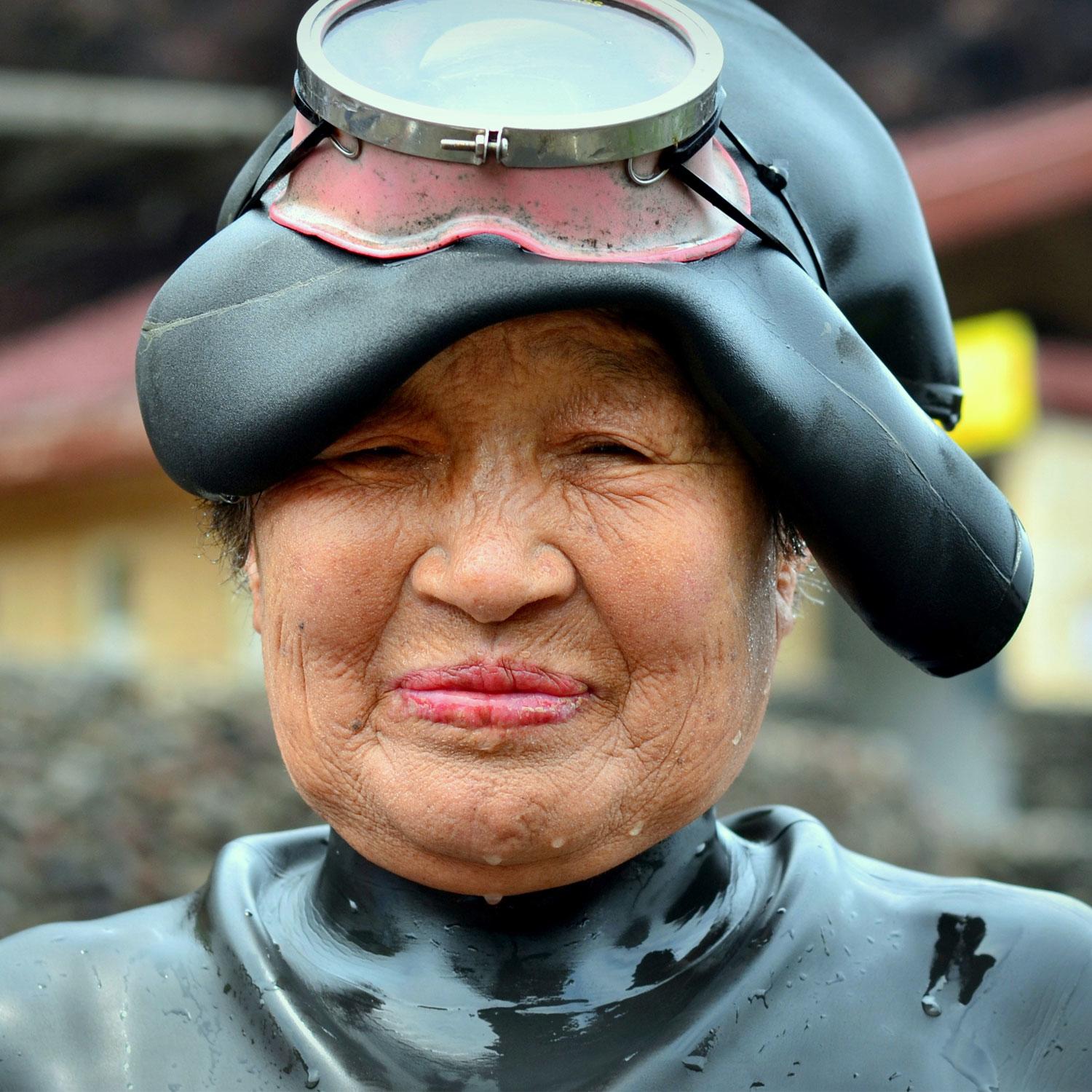 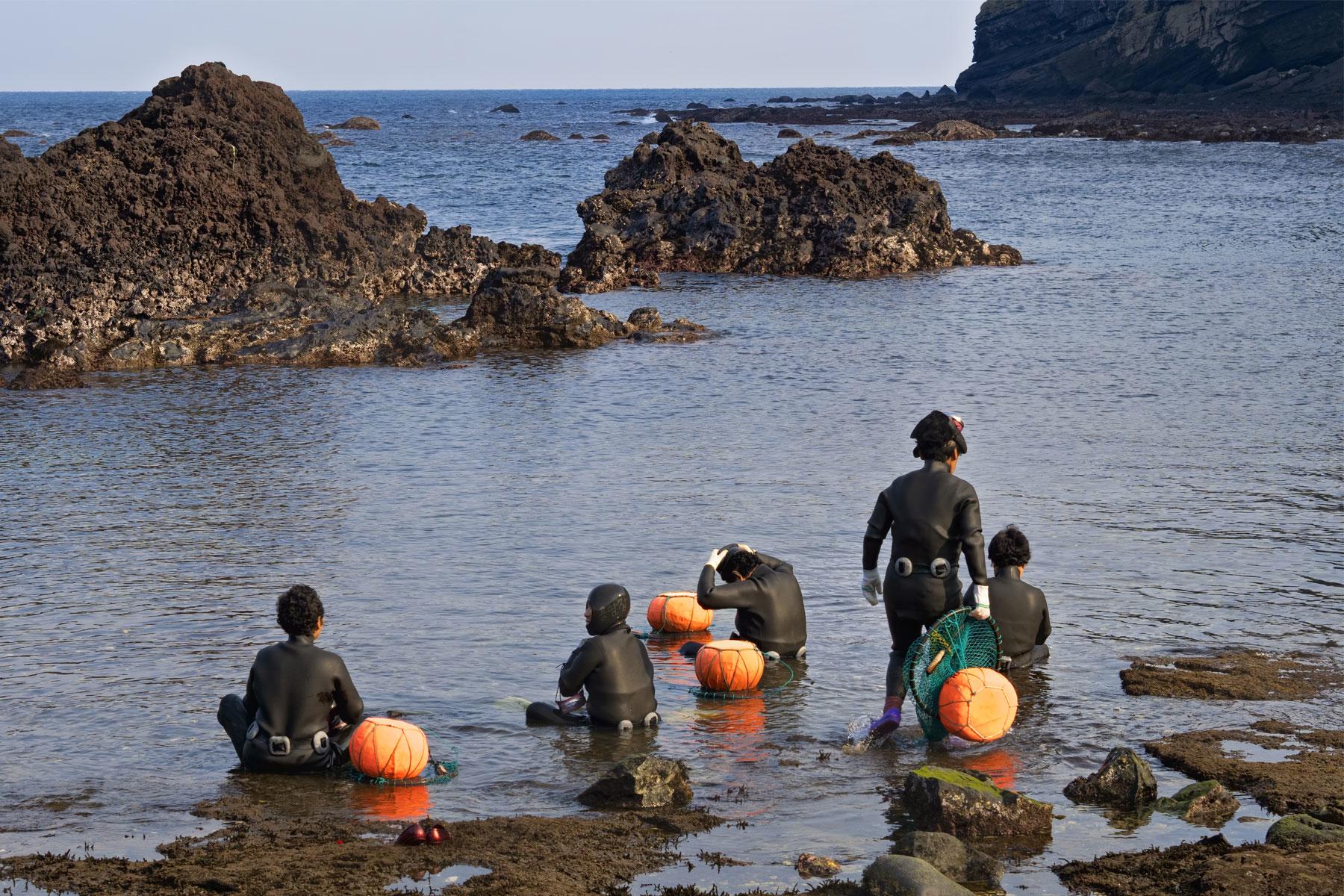 PHOTO: zkruger/Shutterstock
Previous Next
7 OF 10

Not only will you be blown away by a calm cove gently lapping on a black beach surrounded by towering cliffs, you’ll get an opportunity to witness the Haenyeo, or female free-divers of Jeju. These women plunge beneath the surf (diving up to 30 meters and holding their breath for up to three minutes) and use just nets and their hands to harvest such delectables as abalone, sea urchin, oysters, even octopus. 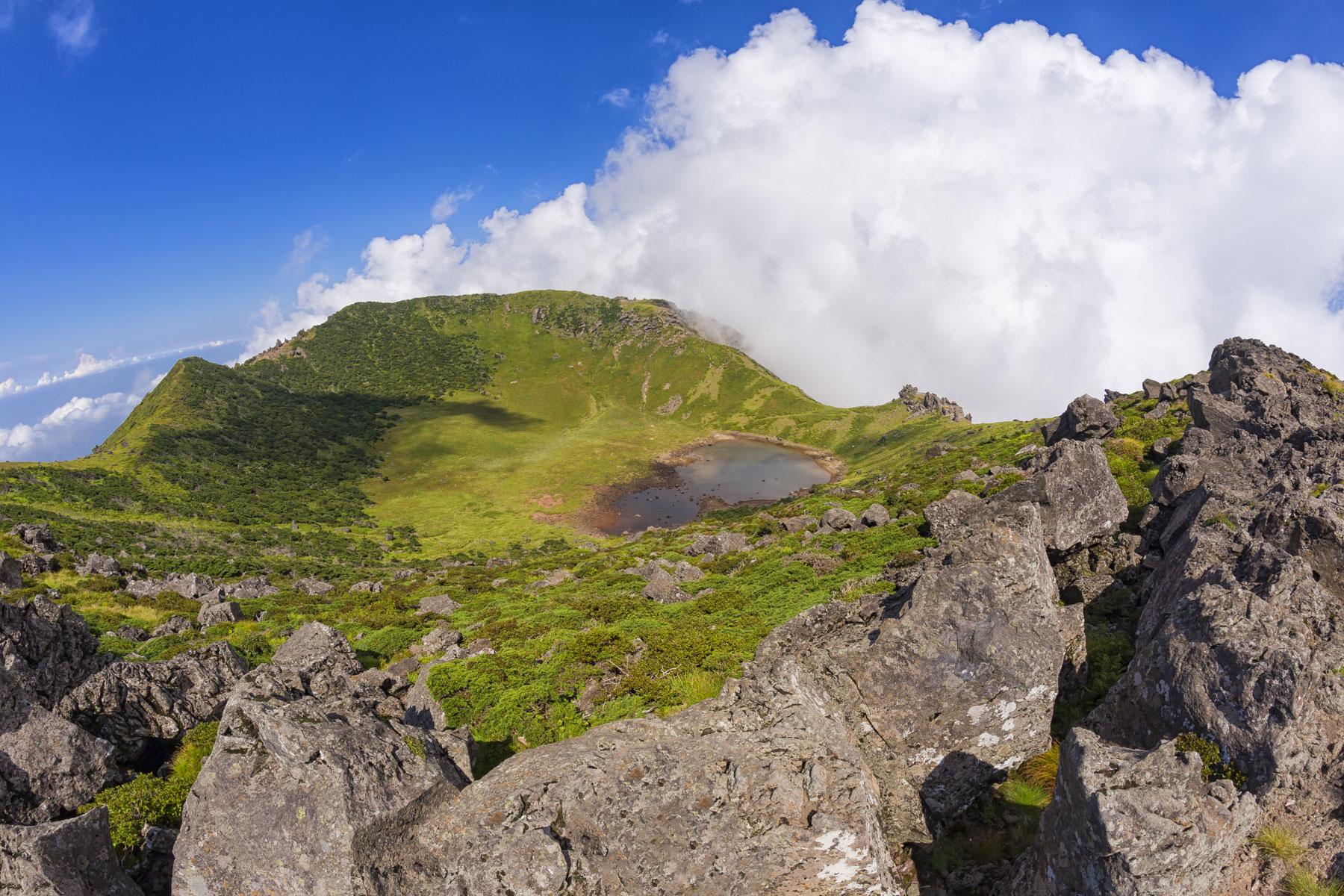 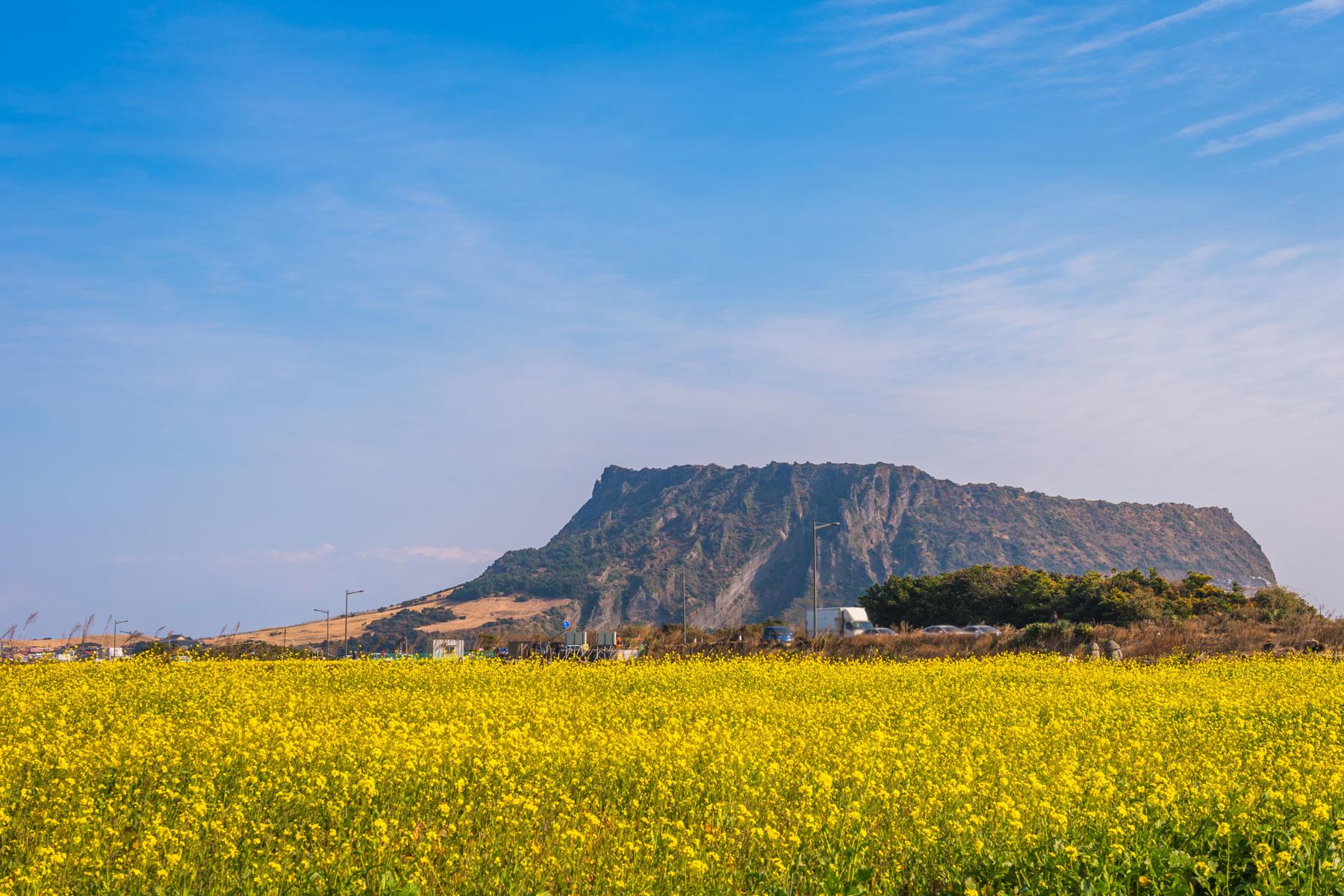 PHOTO: By CJ Nattanai/Shutterstock
Previous Next
8 OF 10

The tallest mountain in South Korea also happens to be an active volcano: it formed the mass of Jeju Island almost 5,000 years ago. Though its peak is often shrouded by low-lying clouds, the hike up and through the national park surrounding it reveals astounding views and unusual sights. The crater lake that sits atop the summit is worth the hike, but along the way, you’ll encounter a variety of ecosystems, from the amphibians and reptiles in the marshland to the weasels and gazelles in the grasslands. For a truly spectacular scene, visit while the broad fields of purple azalea are in bloom. 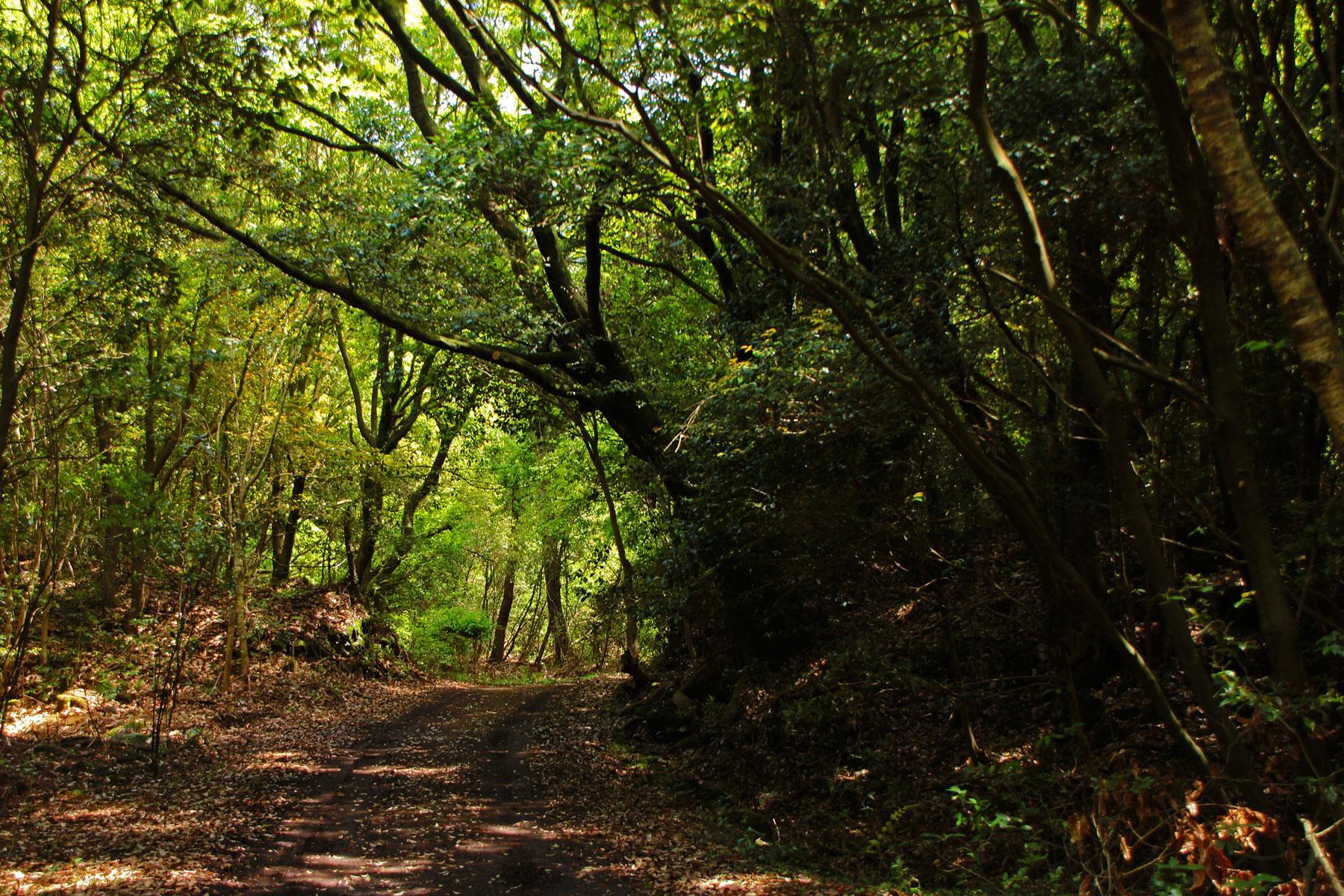 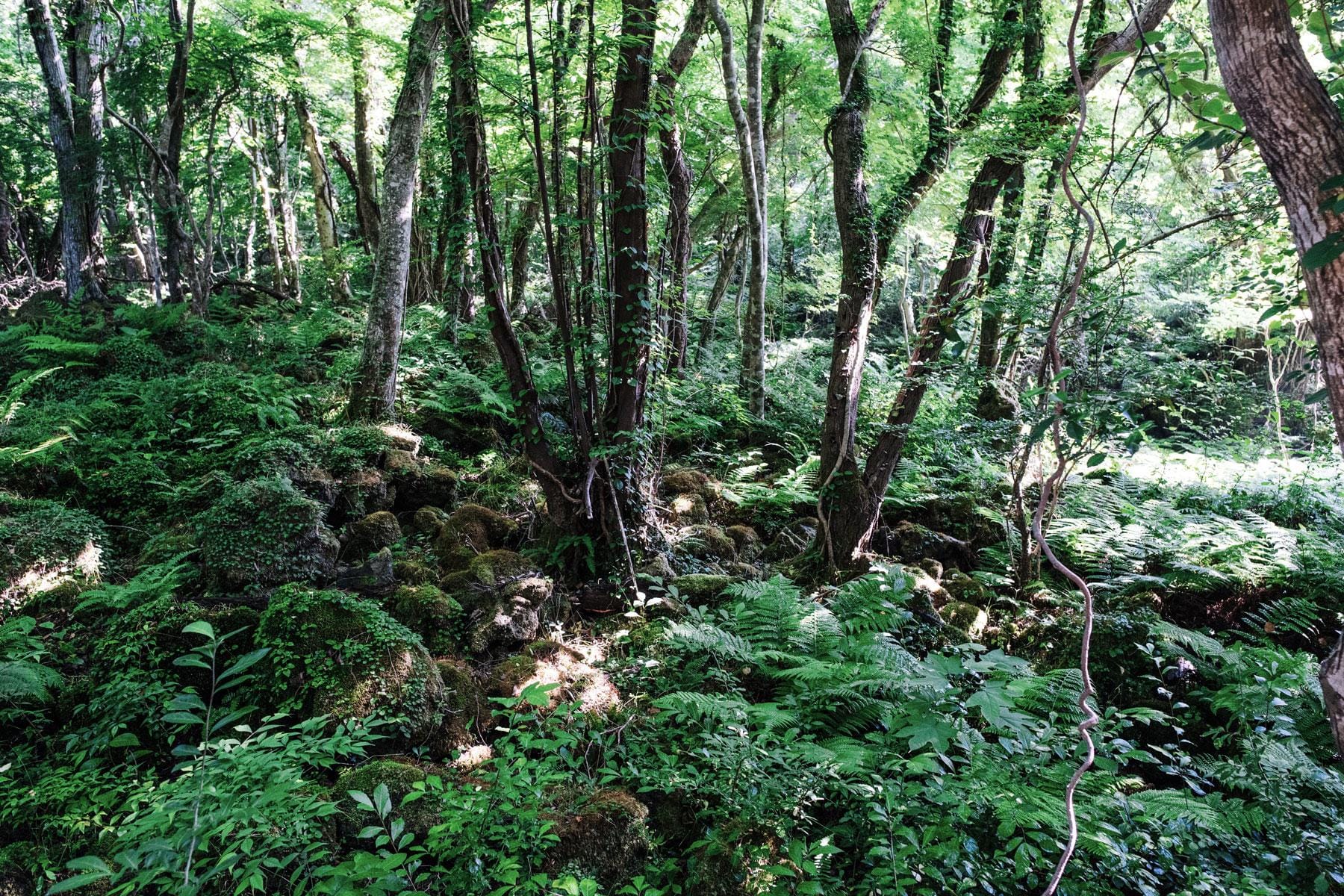 PHOTO: By seung heo/Shutterstock
Previous Next
9 OF 10

These trees seem to grow through stone, which is no small feat for a plant. Holes formed by water in the rock allow trees to get a foothold on the earth and spring forth.  A strange combination of twisty, gnarled roots blanketed in moss and interspersed with feathered brush, the forest feels storybook-worthy, so keep your wits about you. 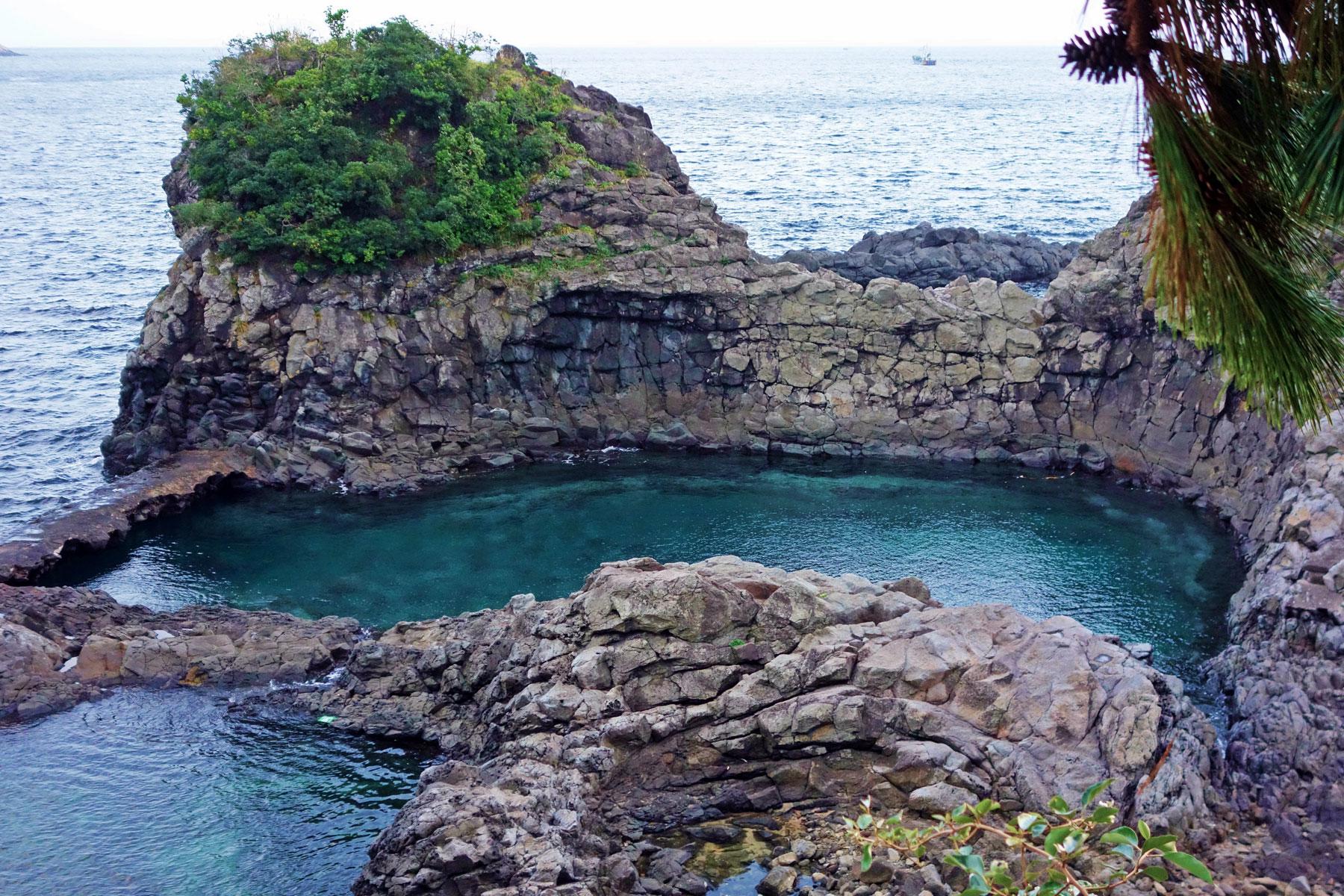 Three natural saltwater pools fill the rocky dips where lava once ravished the land. Popular for snorkeling and swimming, these crystal waters are open for exploring, floating, or splashing around. But bring a snorkel if you have one—the pools house fish, sea urchin, and underwater rock tunnels.

INSIDER TIPIt’s not impossible to navigate without, but water shoes or sandals will definitely come in handy on the rocky descent.