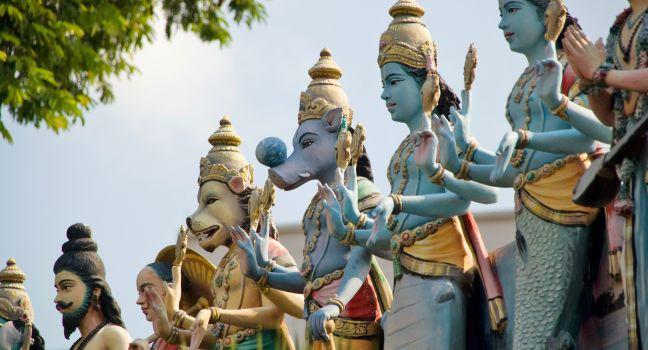 Dedicated to Vishnu the Preserver, the temple is easy to recognize by its 60-foot-high monumental gopuram, with tiers of intricate sculptures depicting Vishnu in the nine forms in which he has appeared on earth. Especially vivid are the depictions of Vishnu's manifestations as Rama, on his seventh visit, and as Krishna, on his eighth. Sri Srinivasa Perumal is very much a people's temple. Inside you'll find devotees making offerings of fruit to one of the manifestations of Vishnu. This is done either by handing coconuts or bananas, along with a slip of paper with your name on it, to a temple official, who'll chant the appropriate prayers to the deity and place holy ash on your head; or by walking clockwise while praying, coconut in hand, around one of the shrines a certain number of times, then breaking the coconut (a successful break symbolizes that Vishnu has been receptive to the incantation). Dress conservatively, and be ready to take off your shoes before you enter.