In Central India, the forests that inspired Kipling’s beloved classic beckon the adventurous.

There’s a place in the heart of India where albino ghost trees spread their gnarled roots across the forest floor and Bengal tigers stalk through teak leaves. Where villagers in saffron and sapphire saris wave from the side of dusty roads. Where sloth bears do their slow dance through tall grasses and baya weaver birds flock to their nests against smoldering marigold sunsets. This is the Seoni forest in Madhya Pradesh, and even if you’ve never been there, we all know this jungle. The area inspired Rudyard Kipling’s seminal work, The Jungle Book. Whether you read the stories as a child or know them through one of Disney’s silver screen adaptations, Mowgli’s forest exists as a universal, mythic narrative of the dark, foreboding jungle where nature rules supreme.

“It was seven o’clock of a very warm evening in the Seeonee hills …” begins the first of Kipling’s Jungle Book stories. I’m reminded of this sultry wilderness as our jeep pulls up to the open-air welcome area of Pench Tree Lodge on the outskirts of Pench National Park. I’ve come to Kipling’s forests to immerse myself in India’s wild, remote natural beauty and hopefully catch a glimpse of Mowgli’s nemesis, the Bengal tiger Shere Khan.

Born in Bombay (modern-day Mumbai), Kipling spent his adolescence in Britain before returning to India in 1882, and although the jungle here provided the inspiration for his collection of tales, most scholars agree that Kipling never actually spent time in the area. The author penned the book after he moved to Vermont in 1894, and some experts credit his descriptions of the Seoni forests to images he saw in photographs, and the English writer and naturalist Robert Armitage Sterndale’s Seeonee: Or Camp Life on the Satpura Range.

Whether Kipling set foot here or not, as I meander down a torch-lit path towards the treehouse I’ll be sleeping in, it’s obvious why the author was so enraptured by the area. The flaming sun turns the sky from pink to mauve, the last rays of light winking through the waist-high grasses that flank the trail. A choir of cicadas fills the feverish dusk with its hum, and beyond the twisted mahua trees that wind around my treehouse, the shadowy jungle stands sentinel. 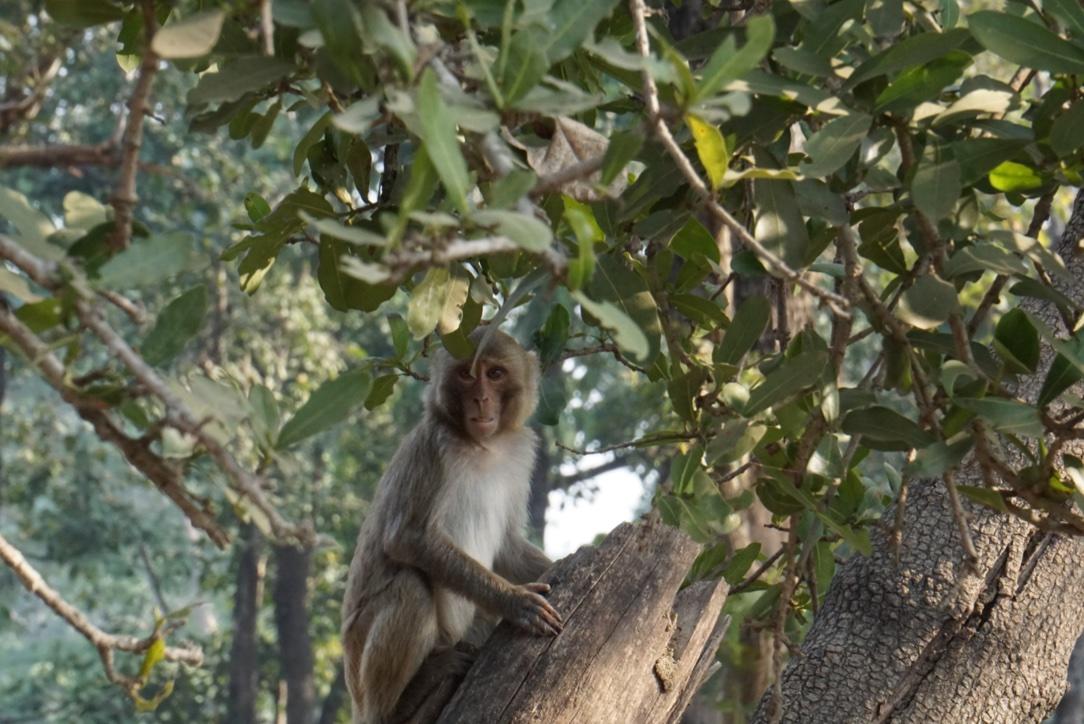 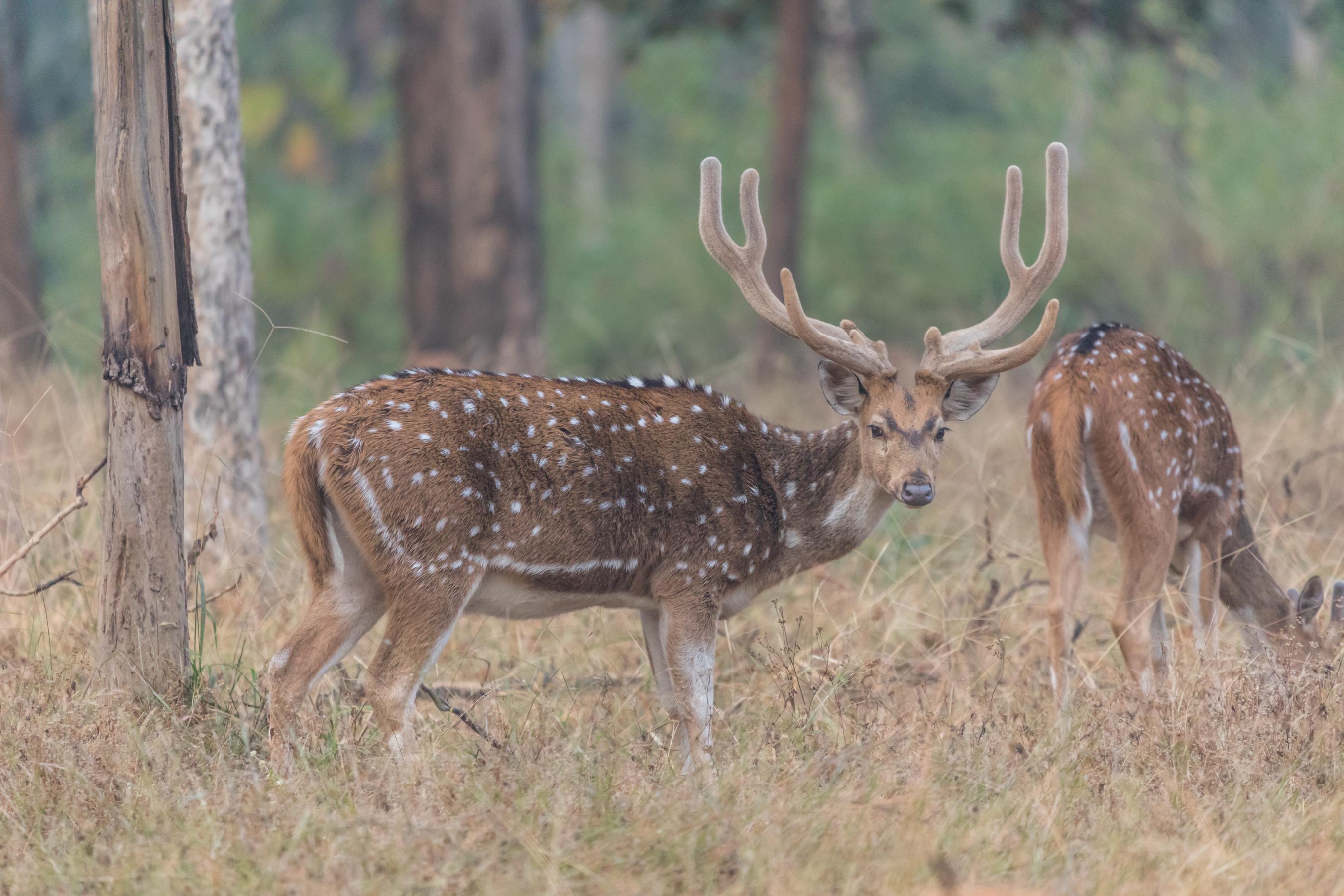 The next morning begins at the front of the lodge with a hot masala chai tea that sends its steam into the morning’s dark predawn sky. Hoisting myself up into an open-air jeep, we careen over bumps and potholes, racing the rising sun towards the park’s Karmajhiri gate. Once inside, our guide and naturalist Chinmay shows me how in tune he is with the natural environment.

“Listen,” he whispers, holding up a finger as the first golden light floods the forest.

Our ears are pricked to the high-pitched, singsong warning call of spotted deer, a sign that a predator is near. The graceful family bounds weightlessly across the forest ground, littered with giant teak leaves. A few wordless hand gestures are exchanged between the guide in a neighboring jeep before our vehicle makes a swift U-turn in the opposite direction. 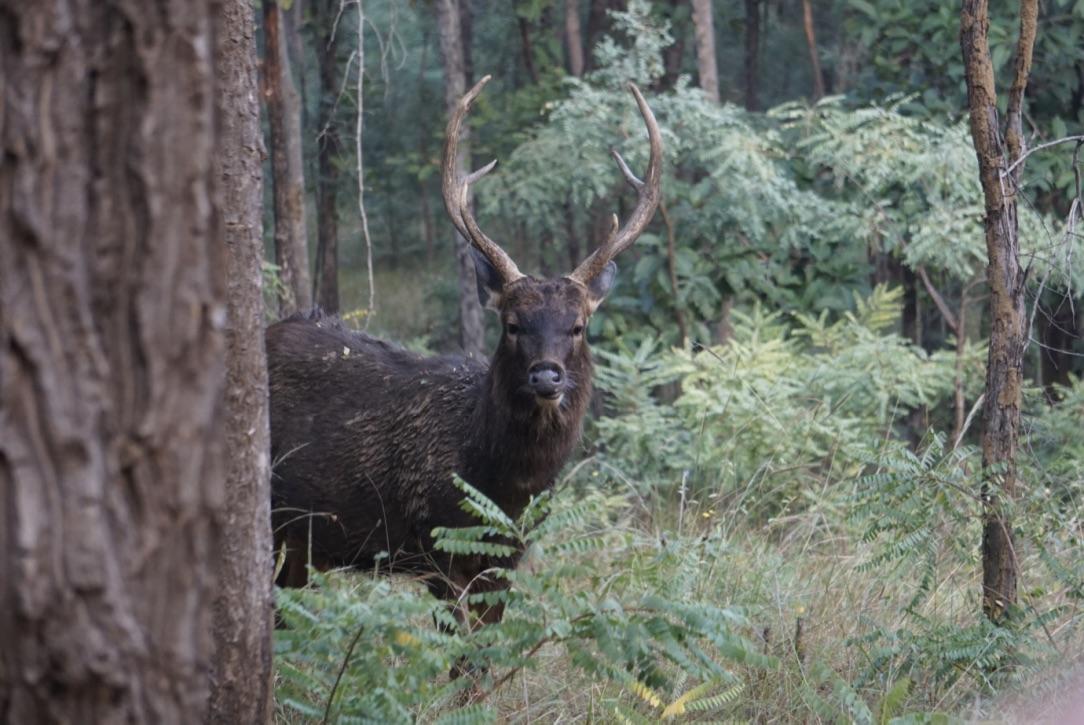 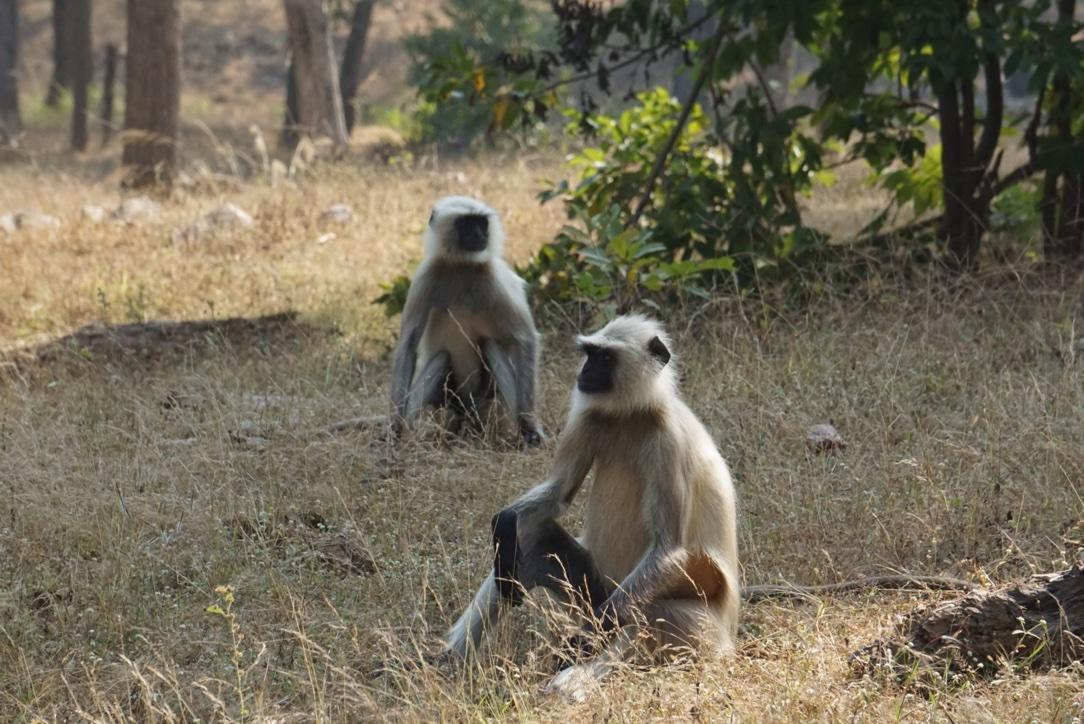 No tiger—yet. We are treated to a sambar deer sighting, though, who makes an appearance in The Jungle Book and is native to the area. The shaggy, hulking beast saunters through tall teak trees and I’m flummoxed that its mammoth antlers don’t get caught in the spindly lower branches. A few moments later, a group of silver langurs, Kipling’s lawless Bandar-log, seem unfazed as our jeep slows down beside them and our camera shutters join the din of their chatter. The morning is warming up and it’s time to break for a picnic lunch before returning to the lodge to wait out the hottest part of the day in its glassy pool.

As the afternoon’s sweltering heat subsides, we gear up on mountain bikes and head out along the sandy trails of the park’s buffer zone. A safari on two wheels brings you much closer to nature. As the wake of our bikes rises in dusty plumes, I feel like I could reach out and run my fingers along the backs of the macaques and spotted deer that dot the forest’s edge. A twisted white ghost tree rises to greet us from the side of the road, a spectre from some dark fairy tale. Spider webs the size of blankets billow and sparkle between branches in the wind and the same warm air brushes past my cheeks.

“Keep your eye open for stripes,” says Chinmay, devoid of all sarcasm.

The thought of seeing a tiger this close, with nothing between us but a bike—a thrilling and terrifying prospect—sends a chill down my spine. Chinmay spots a large footprint in the sand and we all stop to gawk at its size and precision. “This was made recently,” he says. Kipling’s antagonist still eludes us, but the game of hard-to-get is becoming part of the magic. 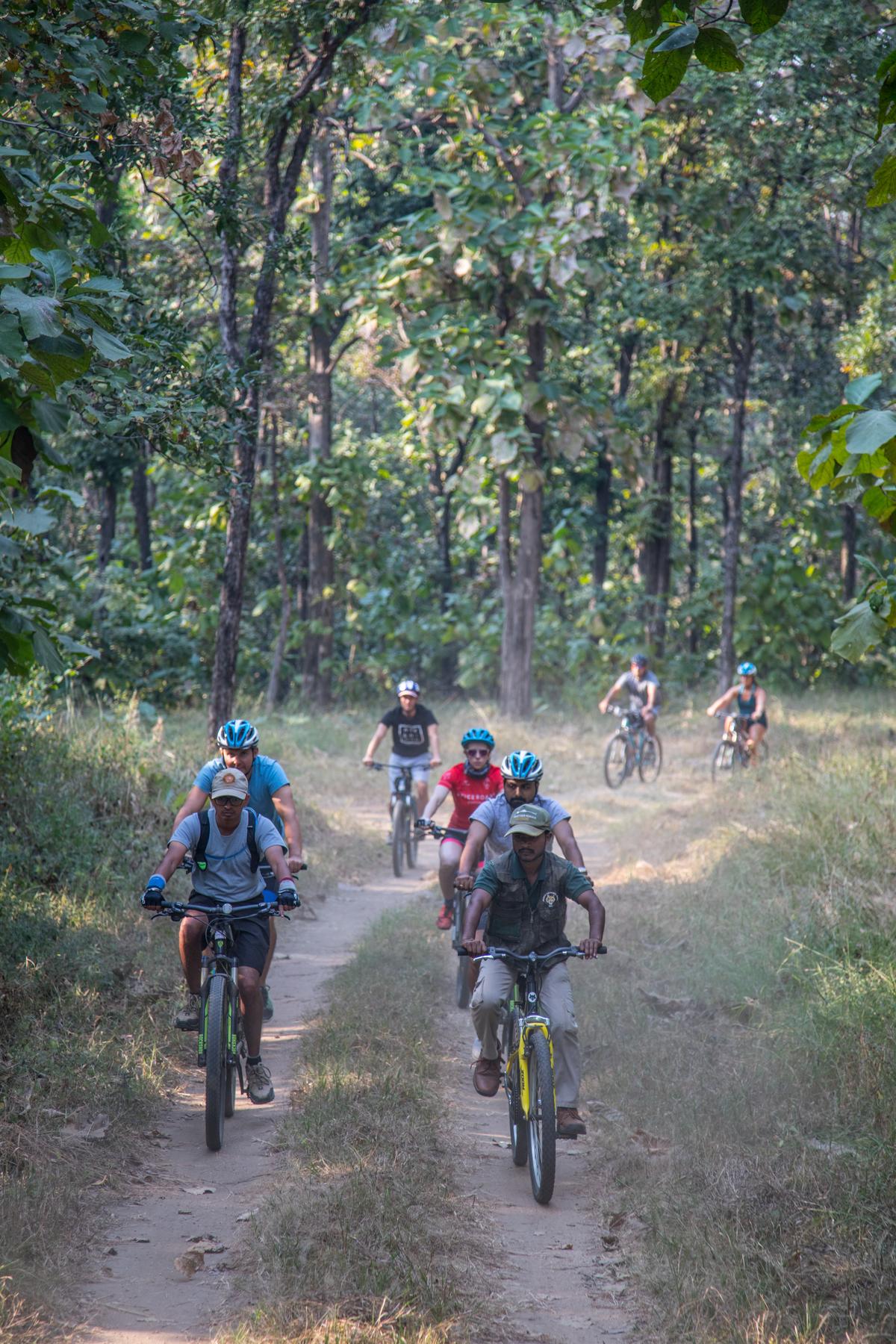 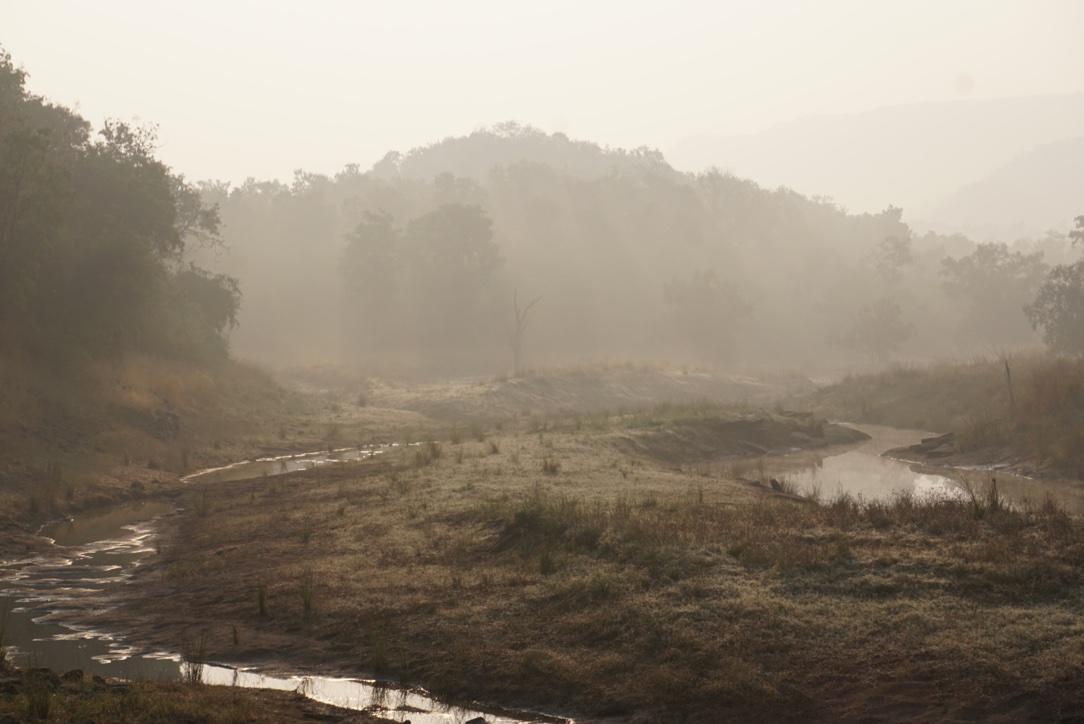 Another early morning and we’re off on our last game drive in Pench National Park. This time, we’re the first jeep past the gates, which I’m hoping will increase our chances of spotting a tiger before other safari-goers scare them off. It isn’t long before we round a turn and Chinmay spots a large paw print on the sandy road. We pull to a stop and fall silent. From deep in the forest comes a cacophony of yelps, hollers, and rustling leaves. The jungle is alive with the warning calls of deer and monkeys—a tiger is close by. The jeep’s tires spin in the sand as we veer off the main road, flying into the jungle’s depths down a much narrower track.

We follow the chattering and screeching monkeys until Chinmay puts a firm hand down on our driver’s shoulders and we lurch to a stop.

“There,” he says, pointing into the trees.

We hear her before we see her and my heart seems to stop for a moment at the rumbling, throaty growl that thunders from the trees. Finally, not 10 yards in front of me, my eyes land on the ribboning black and orange coat, muscled shoulders see-sawing with every powerful stride. My camera dangles at my side as my eyes stay transfixed on the tigress’s stealthy gait, winding her way through the trees. Just a moment longer before she slinks down a grassy knoll away from us, and she’s gone.

When Bagheera told Mowgli that the jungle belonged to the man-cub, and that “thou canst kill everything that thou are strong enough to kill,” Kipling couldn’t possibly have known just how prescient the panther was. Poaching and human-tiger conflict have posed real threats to these magnificent animals over the last century, and only 2,500 Bengal tigers remain in the wild, according to the World Wildlife Fund. Astonishingly, this number is up from thirty years ago, thanks in part to sustainable tourism organizations like Pugdundee Safaris and Royal Expeditions, who are part of TOFT (Tour Operators for Tigers).

“With tourism here, we have more eyes on the park, protecting it,” says Chinmay. “When we protect the tigers, we’re also protecting the rest of the ecosystem.” 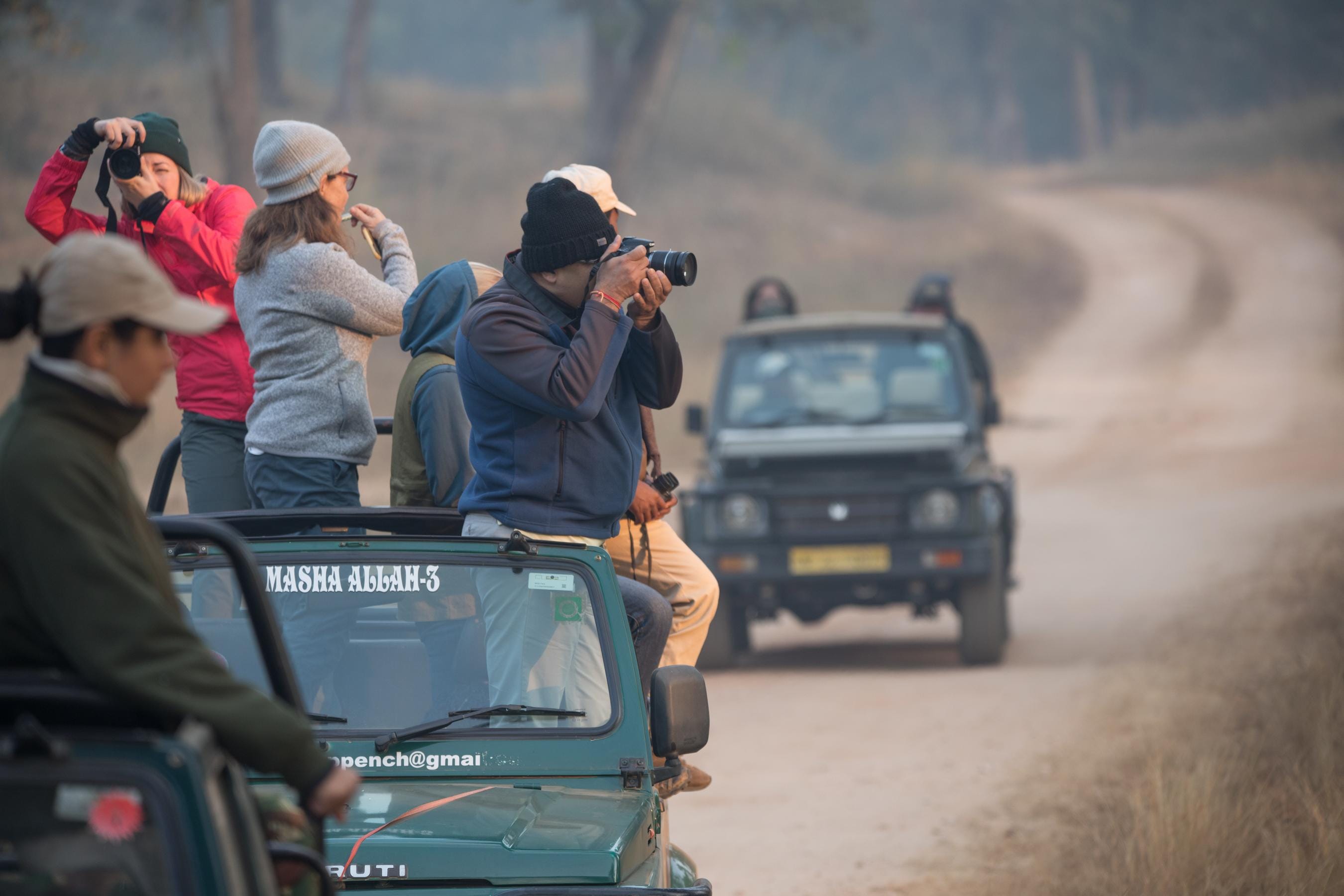 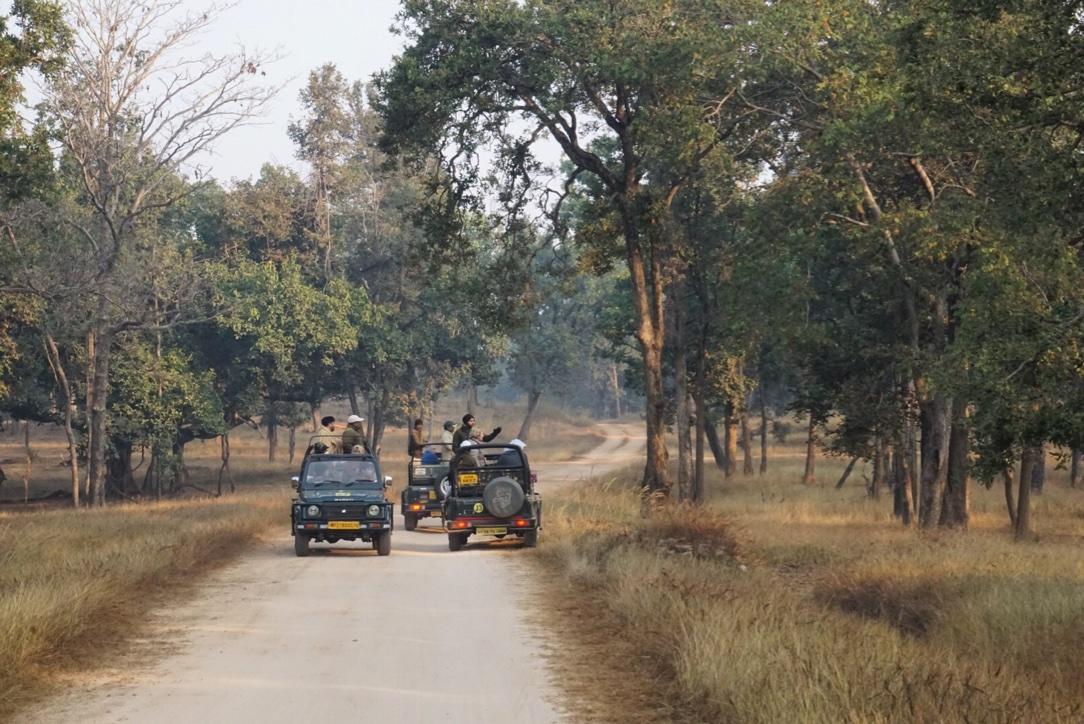 Two days in neighboring Satpura National Park will bring me within inches of a sloth bear, a hairy, rounded black mound that we spot with its long snout buried in the ground, feasting furiously on termites. I learn the animal is slow but vicious, with dagger-like claws, far from the affable animal Kipling based Baloo off of. All the forest’s exotic creatures dance through my mind at night. But still, it’s the tiger that stays with me.

Gathered around a fire on the banks of Satpura’s Denwa River, the flames sparking into the inky night, I imagine the author bent over pen and paper on a cold, snowy day in Vermont, recalling the beautiful fever dream of this jungle. I’ll be dreaming of it too.