When it comes to history, few places tell as fascinating or diverse a story as India.

The history of India can be traced back over five thousand years, during which the country witnessed the rule of several dynasties—from Hindu kings and Mughal emperors to British colonists and dozens of other empires. And over the centuries, these dynasties have left their marks on the country, both culturally and architecturally. From ancient monuments to serene places of worship, here’s a rundown of the 10 most magnificent structures in India that pays testament to the country’s rich and deep heritage. 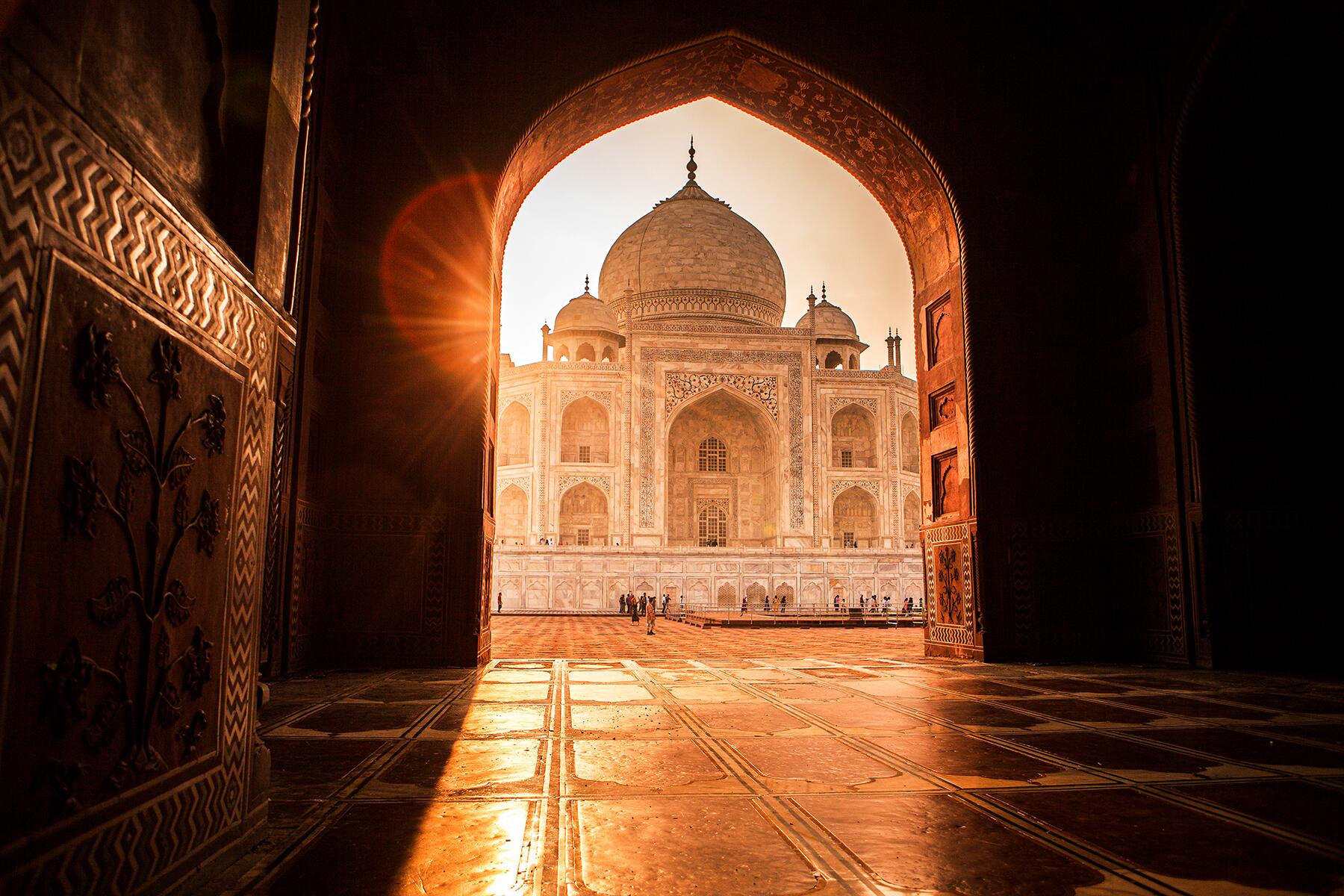 India’s ancient monuments have always evoked an irresistible sense of wonder, but none more so than the sublimely well-proportioned Taj Mahal. Constructed of white marble, carved with floral patterns made of inlaid semi-precious stones, and embellished with calligraphy from the Qur’an, Mughal ruler Shah Jahan built it in the 17th century as a testament of his lasting love for his third consort, who died in labor. Fittingly, the ruler and his wife dwell through the centuries in two graves at the bottom of the tomb.

INSIDER TIPFor a view of the Taj, without the crowds and steep admission fees, visit Mehtab Bagh gardens, directly opposite the monument. For a stunning sunset view of the monument, climb up the abandoned watchtower located on the eastern side of the Taj. 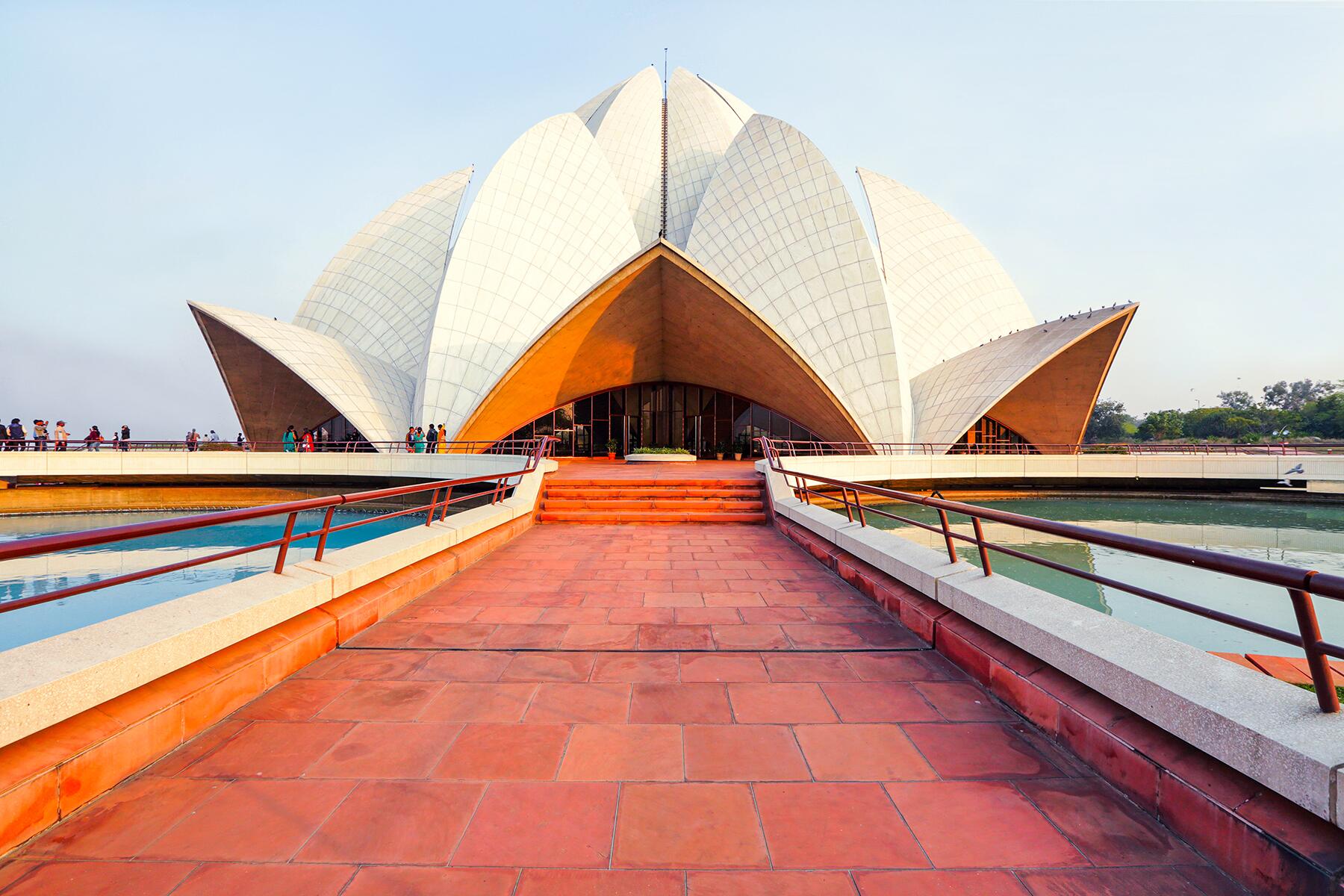 Built out of white marble, the Lotus temple or the Baháʼí House of Worship is as modern and eye-catching as can be. It’s shaped like an unfolding lotus, with nine sides surrounded by nine ponds, making the structure look even more surreal. Inside is a prayer hall where believers of all cultures and religions are allowed to meditate and pray. There’s also an information center that provides a great deal of information about the Baháʼí faith and the temple through films, photos, texts and other exhibits.

INSIDER TIPScope it out during the day, but don’t miss it at night, when its exterior is illuminated majestically. 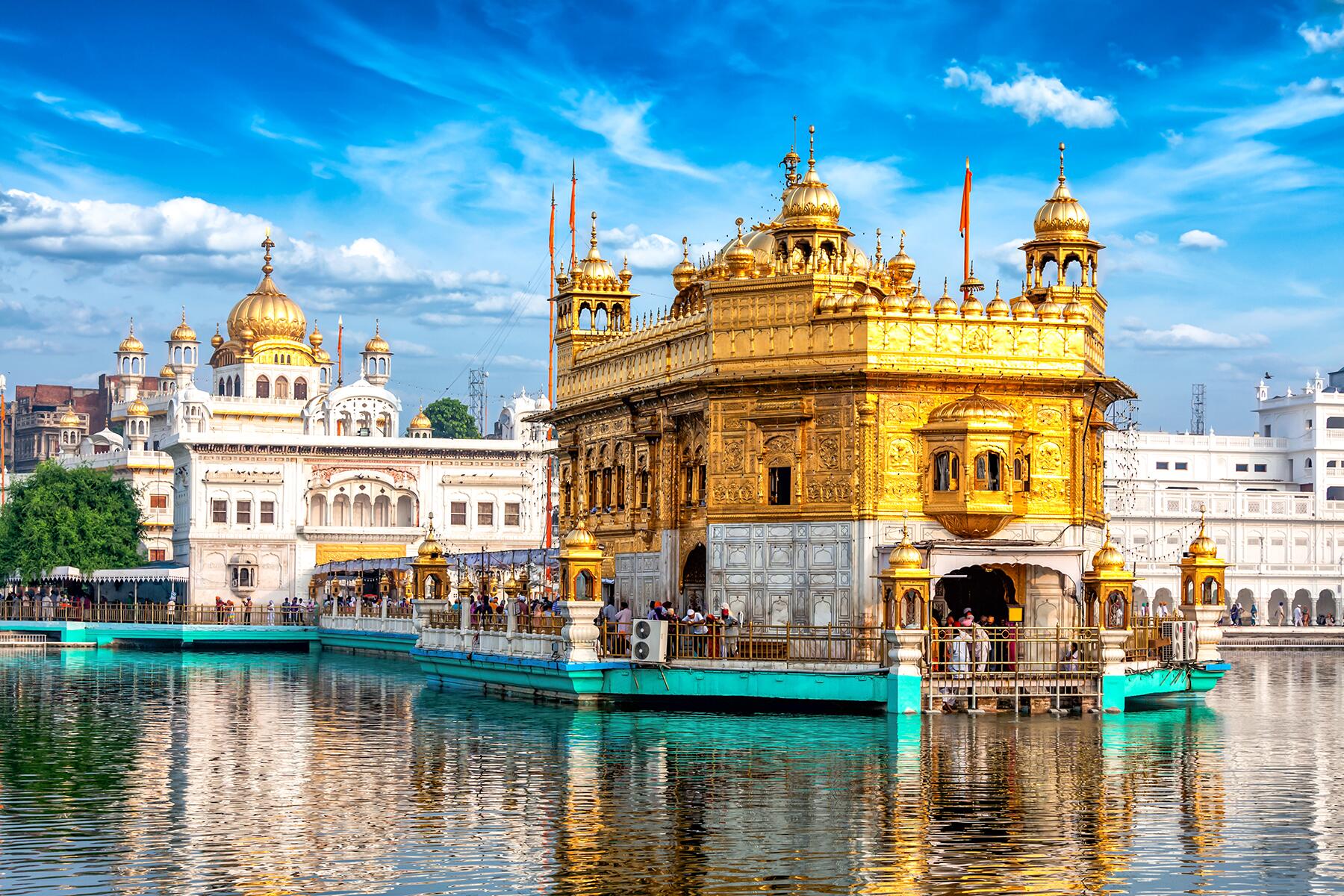 Among the most impressive testaments to Sikhism anywhere, this temple is reason enough to visit Amritsar. Harmandir Sahib, better known as Golden Temple, has been wowing worshipers and visitors since the 17th century, many of whom come to see the richly gilded main shrine and bathe in the sacred tank called the Amrit Sarovar that surrounds it. Its design isn’t the only thing that makes it special—as a Sikh temple, it’s a space where people from all religions and walks of life are welcome and served a meal at the langar, a free communal kitchen. For a full experience, spend some time in the main shrine (photography is prohibited) listening to the chanting of holy hymns. Visitors are expected to follow a strict dress code—headscarf for both men and women (provided at the temple for those who don’t have them), no exposed shoulders or knees, and shoes are to be removed before entering.

INSIDER TIPVisit in the early morning, when the dome of the main shrine glitters under the sun, or at night when it is illuminated, and the whole scene is reflected in the waters below. 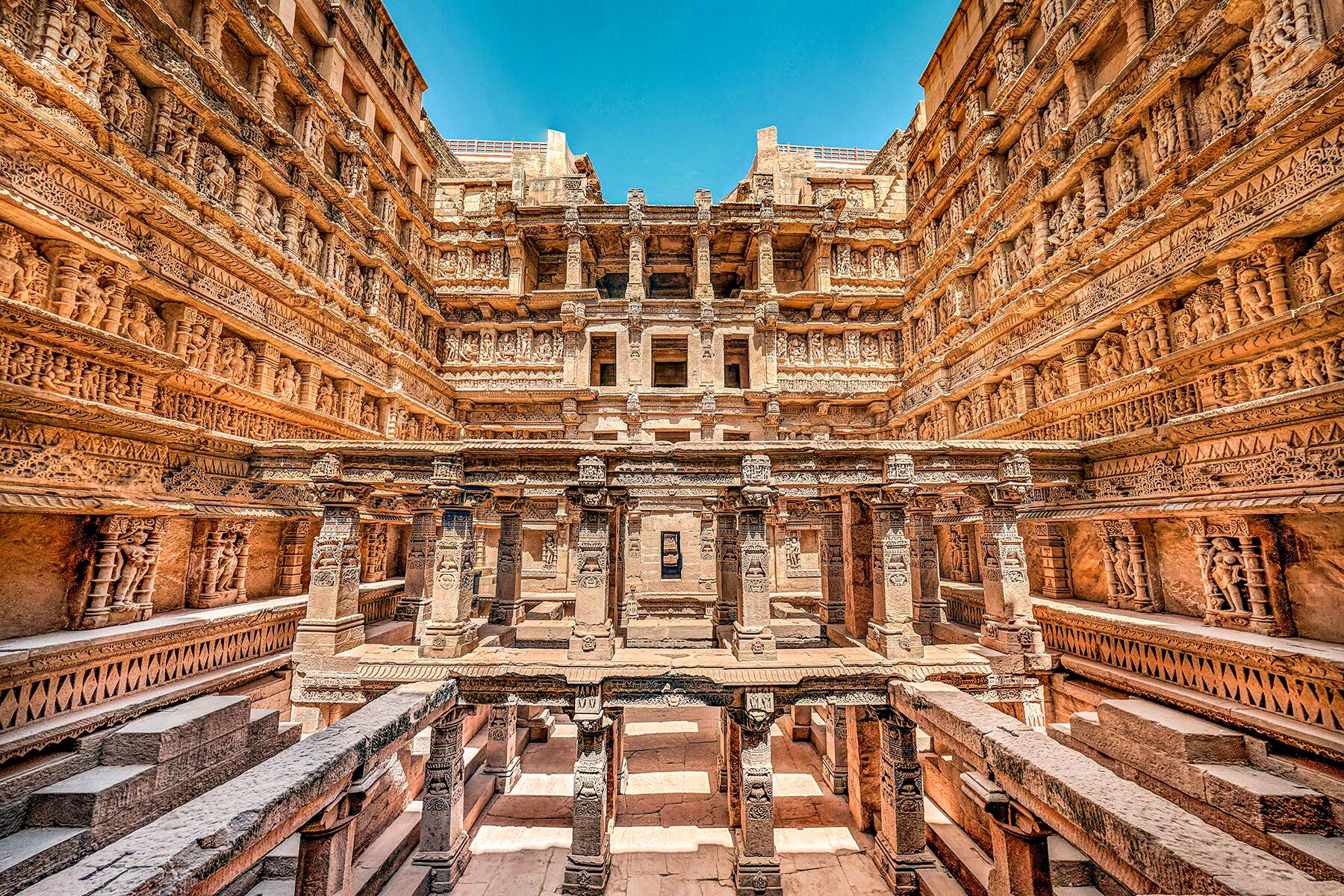 Rani Ki Vav is one of the largest step-wells in India, descending seven stories deep. Udyamati, the queen of Patan, had it built in the late 11th century in honor of her consort, Bhima I. Back in the day, it was used to store water and also served as a meeting place. Today, it lures visitors in with its intricate carvings and motifs that are in nearly impeccable condition, a feat considering they have been exposed to the elements for nearly 10 centuries. Literally from head to toe, it is decorated with sculptures, the majority of which are dedicated to Lord Vishnu. There are also geometric patterns and carvings of other Hindu gods, celestial nymphs, animals, birds, divine mythical creatures, plants, and trees.

INSIDER TIPMake sure to check out the sculpture of Lord Vishnu lying on a thousand-headed serpent, at the lower level of the step-well. 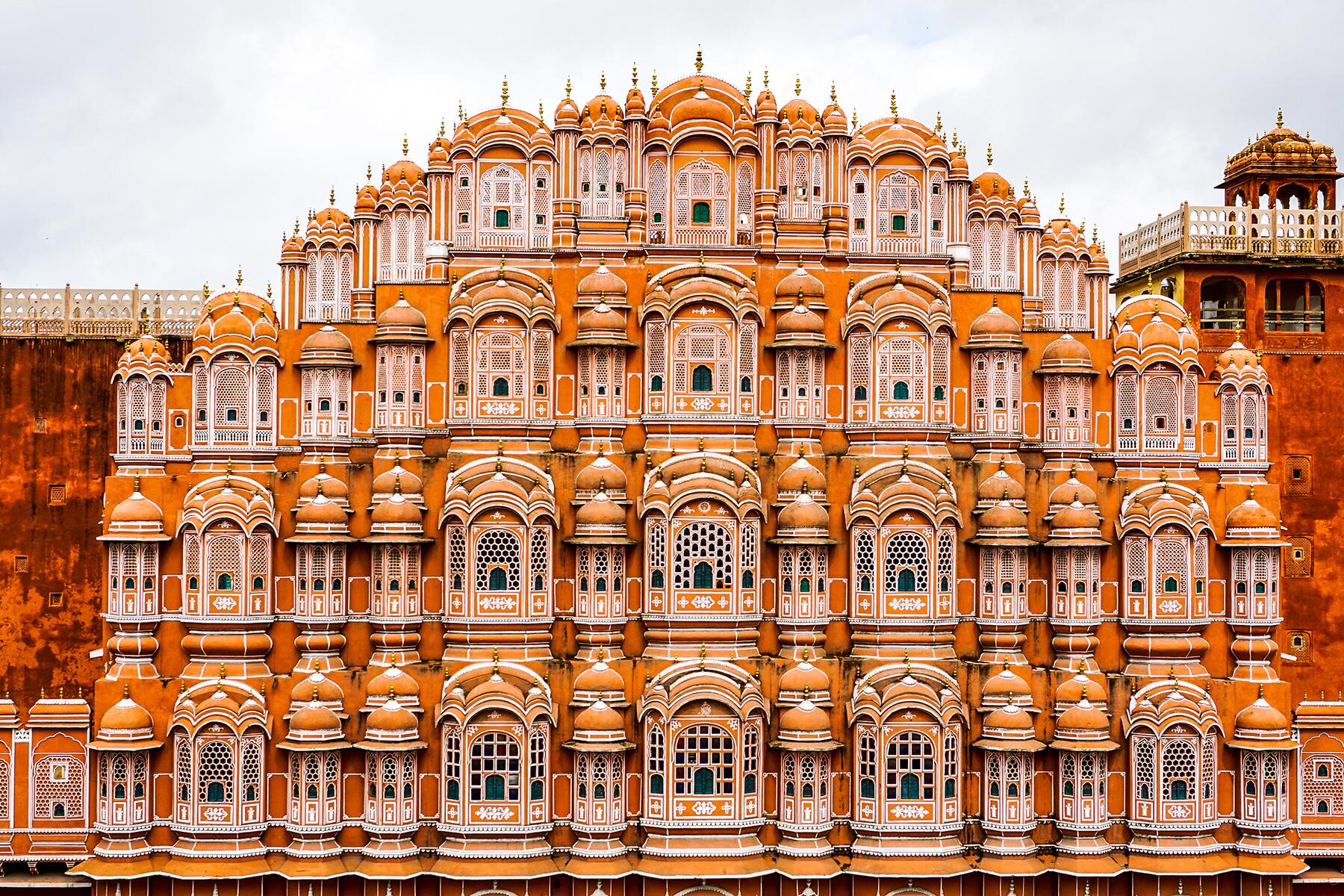 Built in the 18th century for the women of the royal court to discreetly observe the happenings in the city, the five-story sandstone structure is an instantly recognizable staple of Jaipur. The palace is notable for its hundreds of latticed windows that are arranged to look like a honeycomb from outside. A cooling breeze blows through the windows, earning it the name “Palace of Winds.” It is worth noting that there are no stairs to climb, but a series of narrow ramps that wind up to the top story, from where there are sweeping views over the Old City.

INSIDER TIPTry to visit in the early morning (before 7 a.m.) when the sunlight brightens up the whole structure, or at night when it is lit up. To capture a memorable photograph of the whole thing, visit the Wind View Cafe, just across the street, home to views that are simply stunning. 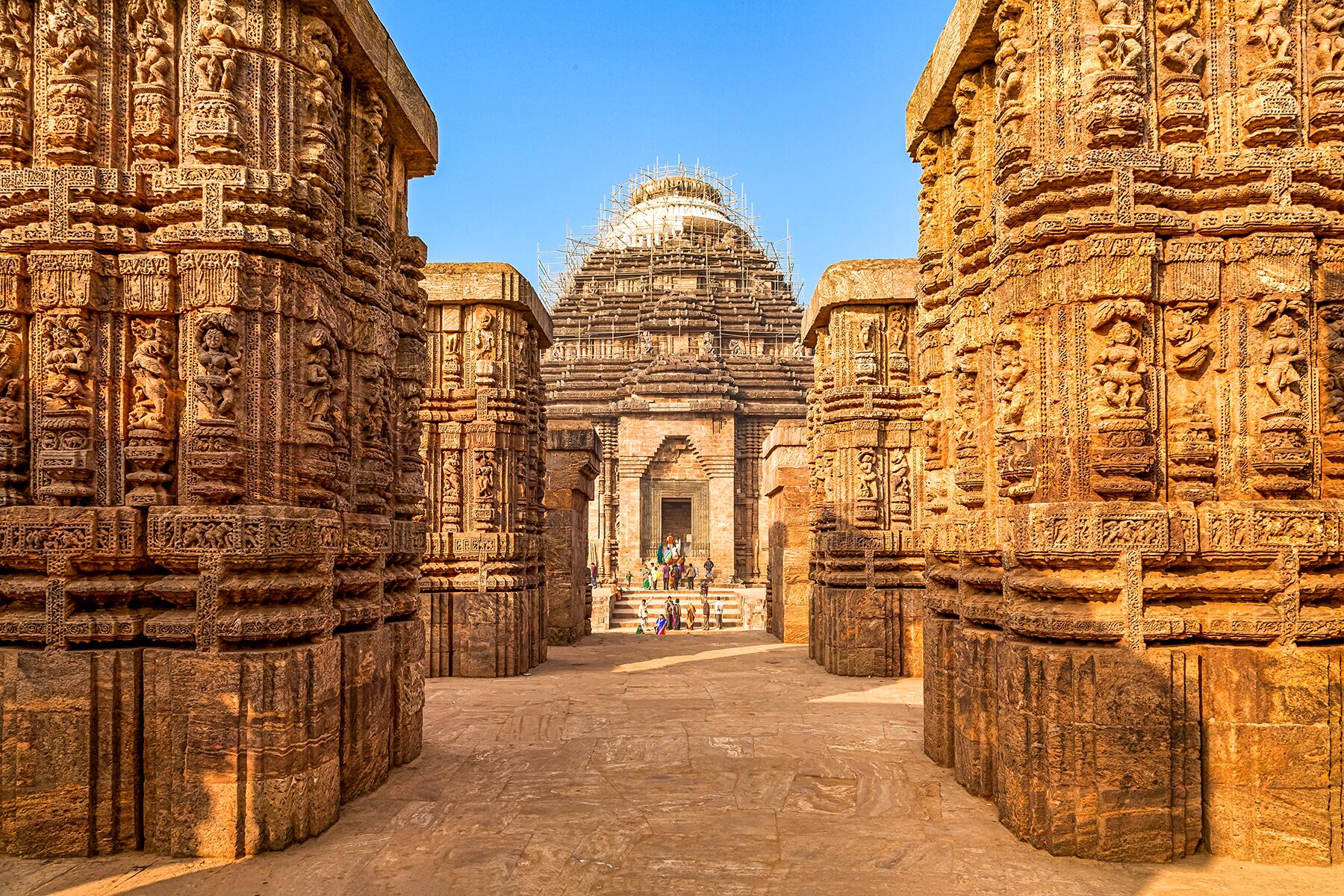 An architectural and archaeological marvel, the Konark Sun Temple—devoted to Surya, the sun god—dates all the way back to the 13th century but has been continually restored and modified through the centuries. Thousands of intricate sculptures and carvings depicting mythological creatures, Hindu deities, animals, birds, and sexual practices adorn its stone walls. What really sets it apart from other temples, however, is its shape, which is like a chariot on 12 pairs of stone wheels that appear to be pulled by seven rearing horses. Another remarkable feature is that it is designed in such a way that the first rays of dawn fall on its entrance, and at any time of the day, the sun shines on one side of the temple, highlighting the wheels that function as sundials. 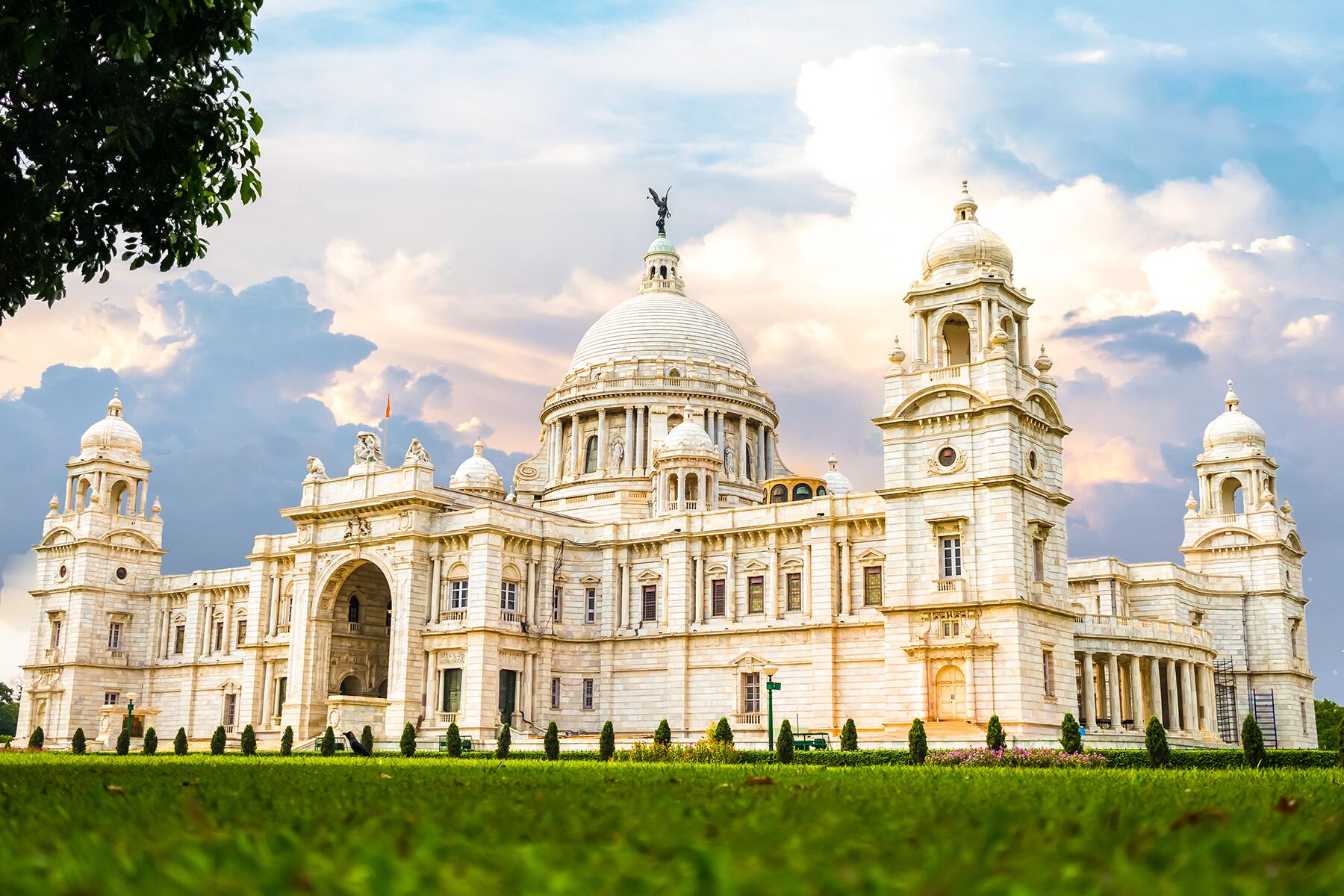 Located among 64 acres of well-tended gardens adorned with statues, Victoria Memorial—dedicated to Queen Victoria—is one of the most well-preserved buildings from the days of British rule in India. Taking much inspiration from architecture around the globe, the structure blends in Mughal and British styles along with Venetian, Deccani, and Egyptian influences. Inside it houses 25 galleries that contain relics of British imperialism, including old manuscripts, books, photographs, sculptures, oil paintings, coins, stamps, and other artifacts.

INSIDER TIPAvoid visiting on weekends, when the crowds are thickest. 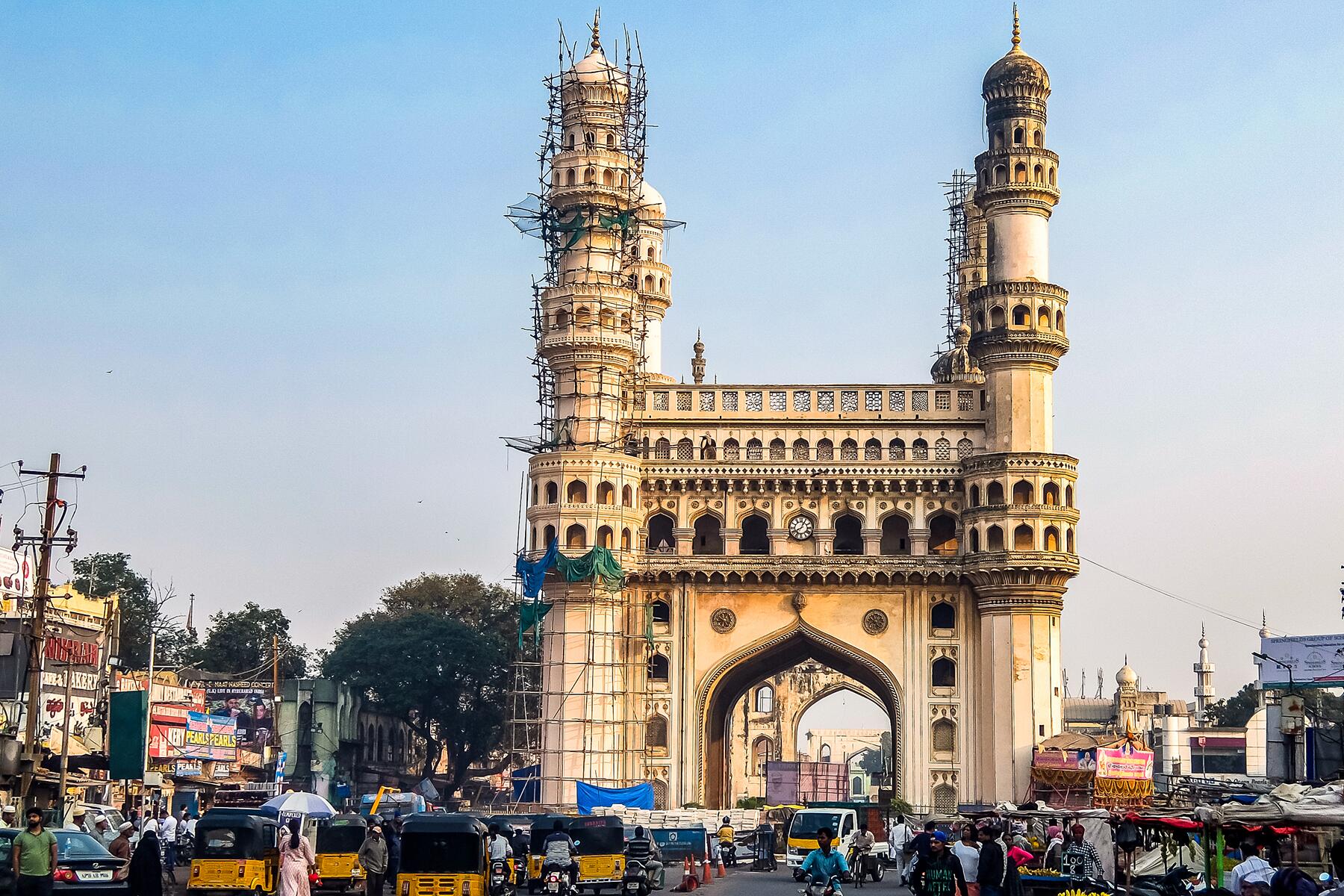 Rising in stately splendor above the labyrinth of hectic streets at the very heart of Hyderabad, the Charminar is one of the finest examples of Indo-Islamic architecture, with a quartet of fluted minarets, lofty arches, ornate balustrades, and delicate stucco decorations. It also offers peerless views across the teeming melee of the old city from its inner balcony; on one side, you will be able to see the spectacular Mecca Masjid. As such, this monument is not only a tourist attraction, but a place of pilgrimage, too. The top floor has a mosque with 45 prayer blocks and a large open space in front of it.

INSIDER TIPShop for traditional Indian bracelets, perfumes and pearl jewelry at the bazaars (market) to the west of the Charminar. 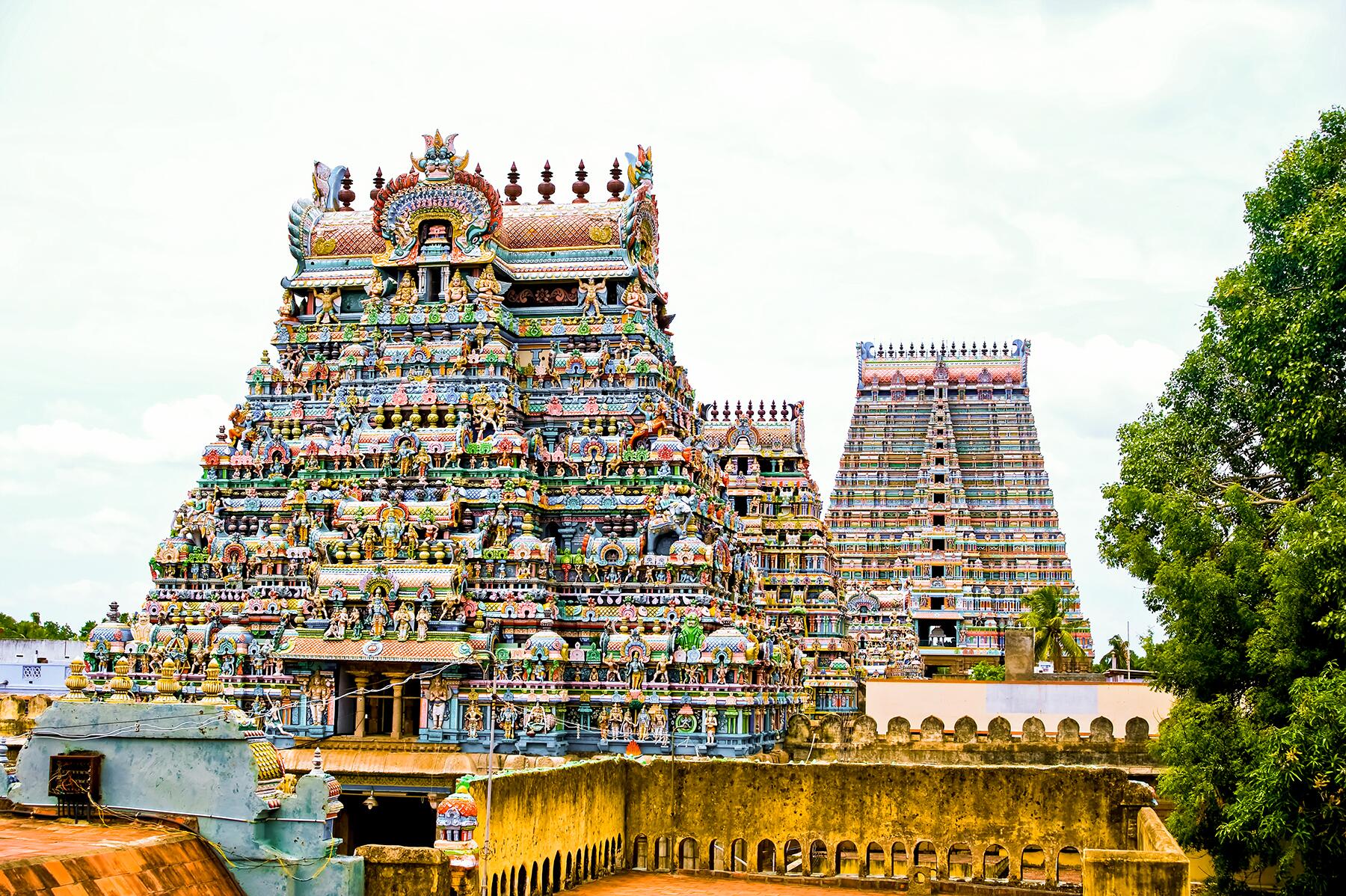 One of the most recognizable structures in Tamil Nadu, the ancient Meenakshi Amman Temple—devoted to goddess Meenakshi (an avatar of deity Parvati) is also among the country’s most historic. While the temple in its current form dates to the 16th century, the structure that predated it has been referred to in texts from as far back as the 6th century. Its most distinctive feature is that it is uniquely decorated with intricate stone carvings of Hindu figures, animals, and demons around the temple’s 14 gopurams (gateway towers), and depictions of mythological stories on the interior walls. The Thousand Pillared Hall, which serves as the temple’s art museum, is also worth checking out. While it’s free to enter the temple, non-Hindus are not allowed into the inner sanctum that has shrines of the temple’s namesake and her husband, Lord Sundareswarar (an incarnation of Lord Shiva).

INSIDER TIPTry to visit the temple early in the day, to witness the morning prayers. The 10-day Chithirai festival held in April is also a popular time to be in the city. It is a grand celebration of the marriage of Meenakshi and Sundareswarar. 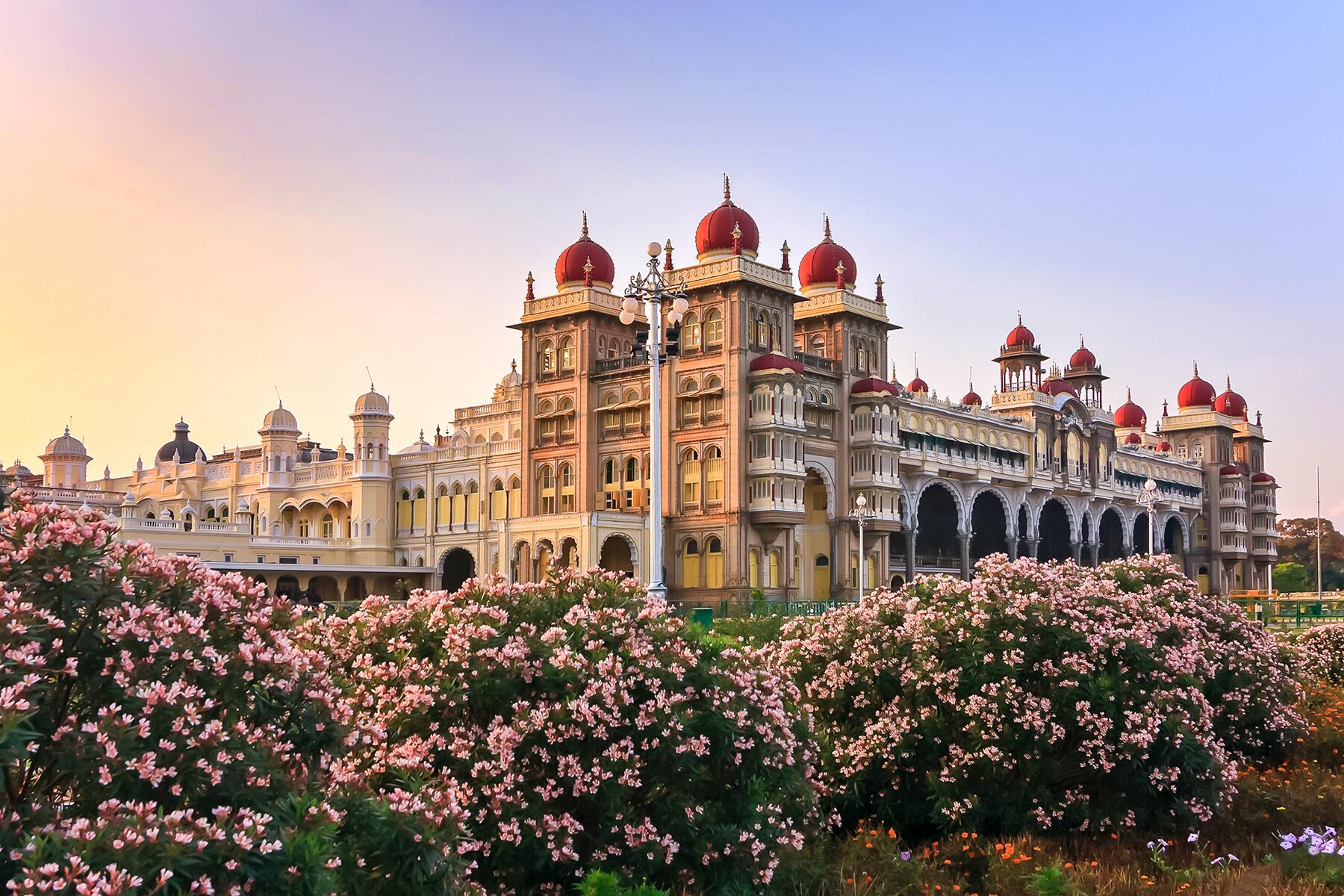 In its present form, dating from the beginning of the 20th century, the Mysore Palace—an erstwhile abode of the Wodeyar kings—is a true archetype of Indo-Saracenic architecture, a style used mainly by the British architects in India. Although it’s impressive from the outside, the real showstopper is its interior. From intricately-carved doors, gilded columns, and stained-glass ceilings to the exuberant mirror work and mosaic floors to royal artillery and lavish paintings from the Raj era, the place is simply grandiose; photography isn’t permitted inside.