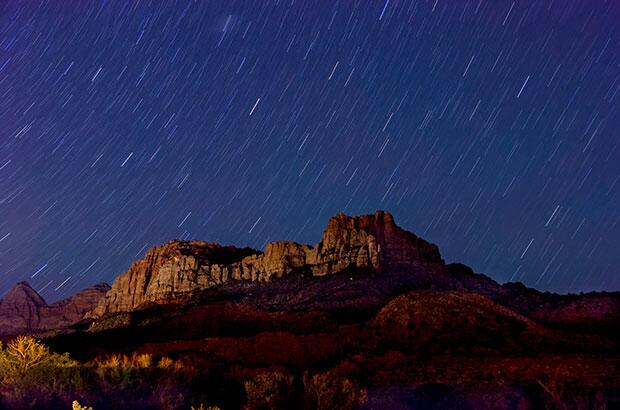 If your typical view of the night sky consists of a handful of stars dimly twinkling through a hazy, light-polluted sky, get ready for a treat. In most national parks, the night sky blazes with starlight—and with a little practice, you can give your family a memorable astronomical tour.

Constellations are stories in the sky—many depict animals or figures from Greek mythology. Brush up on a few of these tales before your trip, and you’ll be an instant source of nighttime entertainment.

The stars in the Northern Hemisphere appear to rotate around Polaris, the North Star, in fixed positions relative to one another. To get your celestial bearings, first find the bright stars of the Big Dipper. An imaginary line drawn through the two stars that form the outside edge of the cup (away from the handle) will point straight to Polaris (which also serves as the last star in the handle of the Little Dipper).

Stars twinkle, planets don’t (because they’re so much closer to Earth, the atmosphere doesn’t distort their light as much). Planets are also bright, which makes them fairly easy to spot.

The easiest planet to spot is Venus, the brightest object in the night sky besides the moon and the Earth’s closest planetary neighbor. Look for it just before sunrise or just after sunset; it’ll be near the point where the sun is rising or setting. (Venus and Earth orbit the sun at different speeds. When Venus is moving away from Earth, we see it in the morning, and when it’s moving toward us, we see it in the evening.) Like the moon, Venus goes through phases—check it out through a pair of binoculars. You can also spot Mars, Jupiter, Saturn, and Mercury—with or without the aid of binoculars.

It’s hard to match the magic of a meteor shower, the natural fireworks display that occurs as Earth passes through a cloud of debris called meteoroids. These pieces of space junk—most the size of a pebble—hit our atmosphere at high speeds, and the intense friction produces brief but brilliant streaks of light. Single meteors are often called “shooting stars” or “falling stars.”

Because our planet passes through the same patches of interstellar refuse each year, it’s easy to roughly predict when the major meteor showers will occur. Notable ones include the Perseids (mid-August), the Orionids (late October), the Leonids (mid-November), and the Geminids (mid-December). Each shower is named after the point in the sky where meteors appear to originate. If you’re not visiting during a shower, don’t worry—you can spot individual meteors any time of the year.

Right now, according to NASA, there are about 3,000 operative human-made satellites (along with 6,000 pieces of space junk) orbiting the Earth—and you can catch a glimpse of one with a little practice. Satellites look like fast-moving, non-blinking points of light; the best way to spot one is to lie on your back and scan the sky for movement. Be on the lookout for satellites an hour or two before or after sunset (though you may see them at other times as well).

You can take the guesswork out of the search with a few useful online tools (www.nasa.gov or www.heavens-above.com). Select your location, and these websites will help you predict—down to the minute—when certain objects will be streaking overhead. It’s especially worthwhile to use these sites to look for the two brightest satellites: the International Space Station and the space shuttle.

See All
/NATIONAL PARKS/PARKS 101/Learn Before You Go