Is this even allowed?

Smiling Grape Adventure Tours, based out of Cambridgeshire, is hosting a pub crawl for St. Patrick’s Day in 2020 in—wait for it—North Korea, despite the forewarnings of the Foreign Office. Now that Kim Jong-un, the country’s leader, has allowed the holiday to be celebrated in Pyongyang, the company has opened up a five-day trip to the capital where people will visit (and indulge in libations at) six different locations starting March 15.

Per Mirror, Smiling Grape Adventure Tours Director Matt Ellis says there is a big drinking culture in North Korea. “A shortage of fuel due to the sanctions over North Korea’s nuclear and missile programs makes it difficult for beer to be shipped around the country, so there are many microbreweries,” says Ellis.

Ellis says that when tourists visit, they will find people to be warm, accommodating, and inquisitive. But given the North Korean government’s sordid past (and present) you shouldn’t be so quick to hop on a tour.

Let’s Remember: People Are Known to Be Taken Prisoner While Visiting

Lest we not forget: North Korea is not safe for tourists or foreigners (generally). Of the recent (infamous) cases American student Otto Warmbier—who was traveling with China-based tour operator Young Pioneer Tours—was arrested and jailed in 2016 after trying to steal a poster from his hotel. Sentenced to 15 years’ imprisonment with hard labor, Warmier suffered an injury from an unconfirmed cause and fell into a vegetative state and, though he was released, he ultimately died in 2017.

Okay, but Who Is Actually Allowed to Go to North Korea?

Technically, North Korea allows anyone to travel to the country (though South Koreans and journalists are known to have their entry denied). But once inside, visitors are closely monitored and aren’t allowed to travel outside designated tour areas and independent travel is not permitted—if you leave your hotel, you must have a guide.

But if you’re a United States passport holder, expect an uphill battle. Since September 1, 2017, U.S. passports are not valid for travel to, in, or through North Korea unless specially validated by the State Department; this rule was implemented by the U.S. Government.

Try Going to These Places for an Adventurous Bar Crawl, Instead

If you’re looking for a not-so-standard bar crawl abroad, you have a bevy of options (and make a trip out of it!). The Tokyo Pub Crawl is world-renowned and not just relegated to Saint Patrick’s Day; the event commences every Friday and Saturday (“We never stop rain or shine.”). Similarly, Pub Crawl Barcelona runs seven nights a week and offers a “free weed café membership,” and a free drink in each bar. 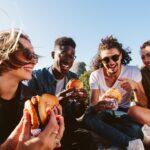