Find yourself in Montreal. Actually, find me. Can somebody tell me where I am? I’m lost.

There are a thousand reasons to visit Montreal, as it’s a beautiful city with a ton of history, art, culture … the list goes on. However, it being my first time there, and being generally confused despite very clear directions from the nice tourism board, I found myself lost, just, constantly. This is entirely my fault as I am horrible with directions. Lucky for me, it didn’t matter because even when you’re lost, Montreal is pretty damn great. And as lovely as the city’s many cultural aspects are, my very favorite things were actually quite small and intricate–but still unique to Montreal.

I Happened Upon Convenience Stores.

I have an abnormal love of convenience stores. So when I got lost on day one, the first thing I did in a new city with tons of exciting options that I couldn’t get at home was … stick to what I know well: very regular stores (or, as they are called here, “deps”) that sell snacks. At my first convenience store visit, I found this protein bar–and was absolutely elated by it.

What is this? I’ve never seen this before?? And for only $1.49?! Are you kidding me, Montreal? I am absolutely serious when I say: this thing was delicious and a hot deal. Hey, man, I may have gotten lost on the way to a museum, but I am as happy as can be with this find. I’m not joking.

Listen, I have my interests, you have yours. I went to 7 convenience stores that day. What of it? This is my article. Keep reading!

I Happened Upon a Good Deal.

I found this keychain when I wandered into the gift shop at the Notre Dame Basilica to see the new lights show, Aura (amazing, beautiful–you should see it!). It looks like the Lord is giving his small friend (also the Lord??) a giant thumbs up … but, yeah, obviously it is a walking stick, not a thumb. Anyways, the gift shop had affordable prices. I didn’t buy this keychain, but I sure wish I had.

I Happened Upon an Underground City.

Okay, so, in Montreal, sometimes you accidentally happen upon an underground tunnel. This is an entrance to one in the World Trade Centre. It proves quite useful during the winter months, for business people who don’t want to bear the extremely cold weather. I didn’t go in there, because it was warm outside and I could walk on the regular streets comfortably. Also, tunnels frighten me–even safe ones.

I Happened Upon a Mall Attached to the Metro That Leads Upstairs to a Bank (???)

I thought I had a good grasp on the subway system after precisely two days of being in Montreal and using the subway literally one time (with a guide), but this was obviously foolish, and somehow I found myself in a closed bank that’s also a mall, downstairs. I confidently deboarded the train at what I thought was my station (nope) and accidentally found myself in said mall that was connected to the station (?), and was lost in there for about 20 minutes. The mall led upstairs into a bank (??), which led me, finally, to the street, where I was finally like, “Oh, this isn’t my stop.” This was fascinating!

INSIDER TIPYou are not actually allowed to take photos inside of banks. So, I didn’t, because I am a good citizen who doesn’t break laws. Sorry. The bank will remain a mystery to you, and, frankly, to me, as well.

That Said, I Happened Upon a Lot of Really Enjoyable Banks.

After I accidentally found myself inside of the bank on top of the mall attached to the subway, I then happened upon several other banks. Here’s the thing: Montreal makes banks look cool as hell. Banks aren’t usually fun. Banks in Montreal, however, are very lovely and enjoyable to look at. Note: You are allowed to take photos in the lobby of banks. So I took one of the ceiling. This is the Bank of Montreal’s ceiling. It’s a very regal ceiling. 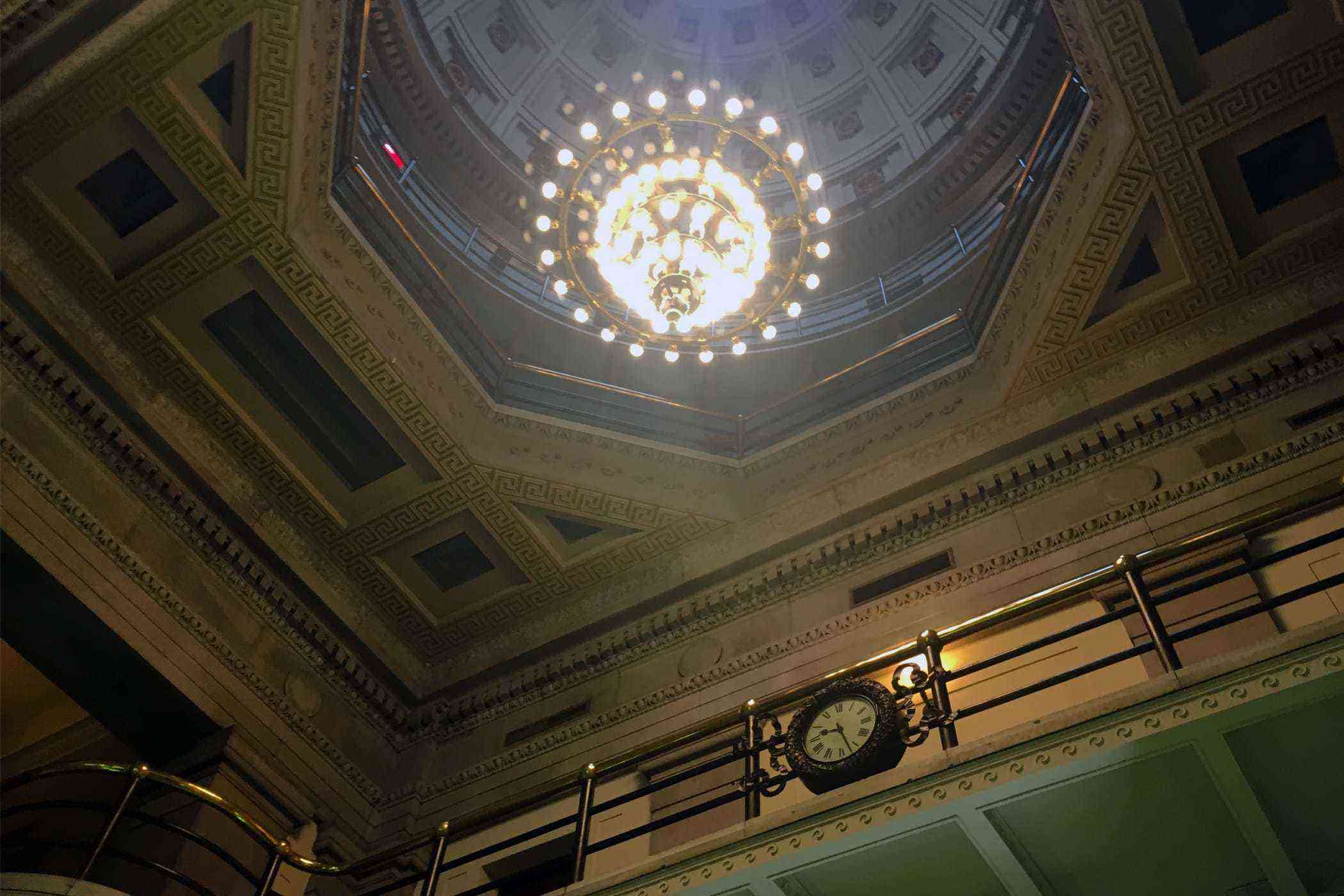 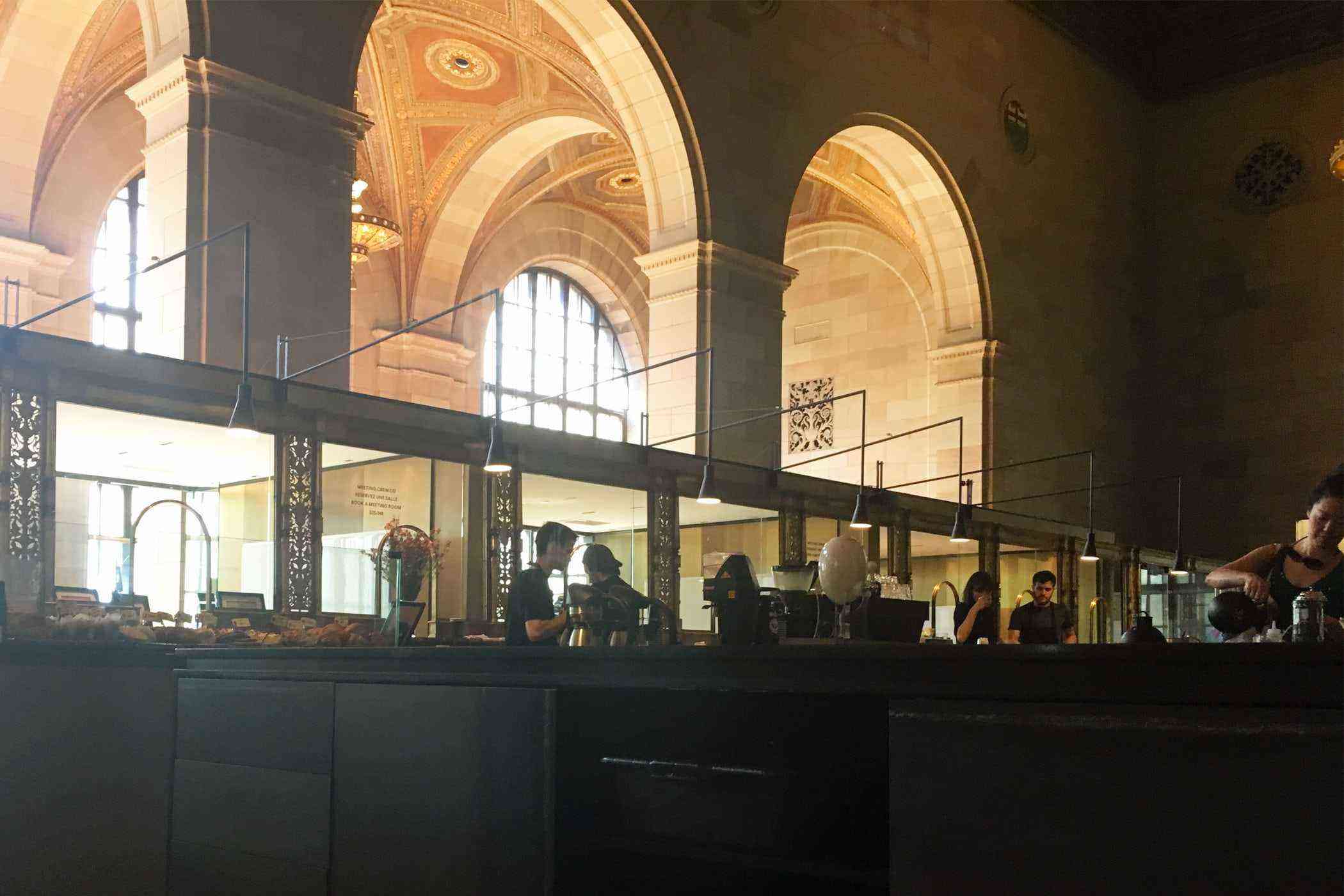 This used to be a fancy bank, and now it’s a fancy coffee shop … but still looks like the fancy bank, except now it serves really, really good coffee. This was my favorite bank, for this reason.

I Happened Upon This Old Bathroom.

How does this city make an old bathroom look cool? This was once a public bathroom because until the 1940s, most homes in Montreal didn’t have toilets or showers. The old bathhouses remain, many repurposed with working pools–but some (like this guy) are straight up abandoned.

I Happened Upon Another Dep. What? Get off of My Ass.

Yes, I went to another dep/convenient store. Give me a break–it’s pretty and had neat things (local beers and candies).

I Happened Upon a Giant and Her Dog (Who Is Also a God). 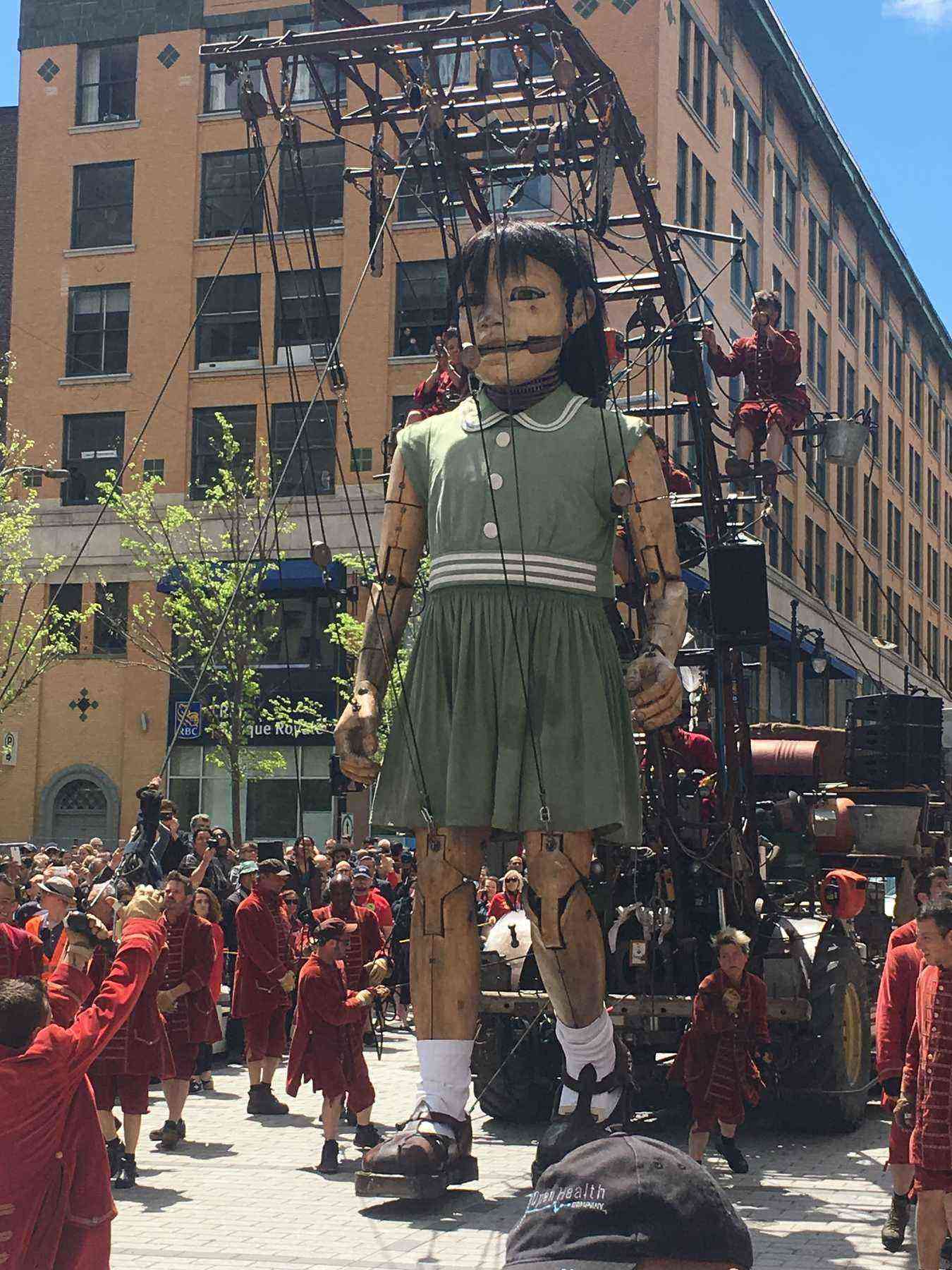 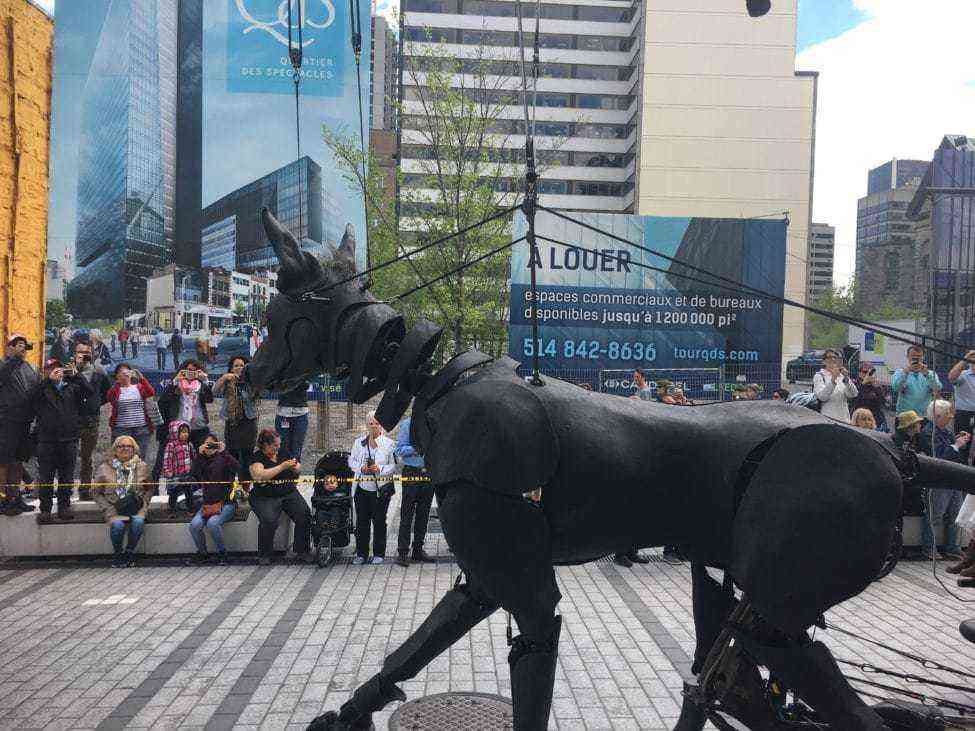 Sometimes you’re in Montreal when it is its 375th birthday party and there are giant marionette robots walking the streets. That’s just the kind of city it is. Art, culture, sometimes you see a giant. You know. Regular stuff. 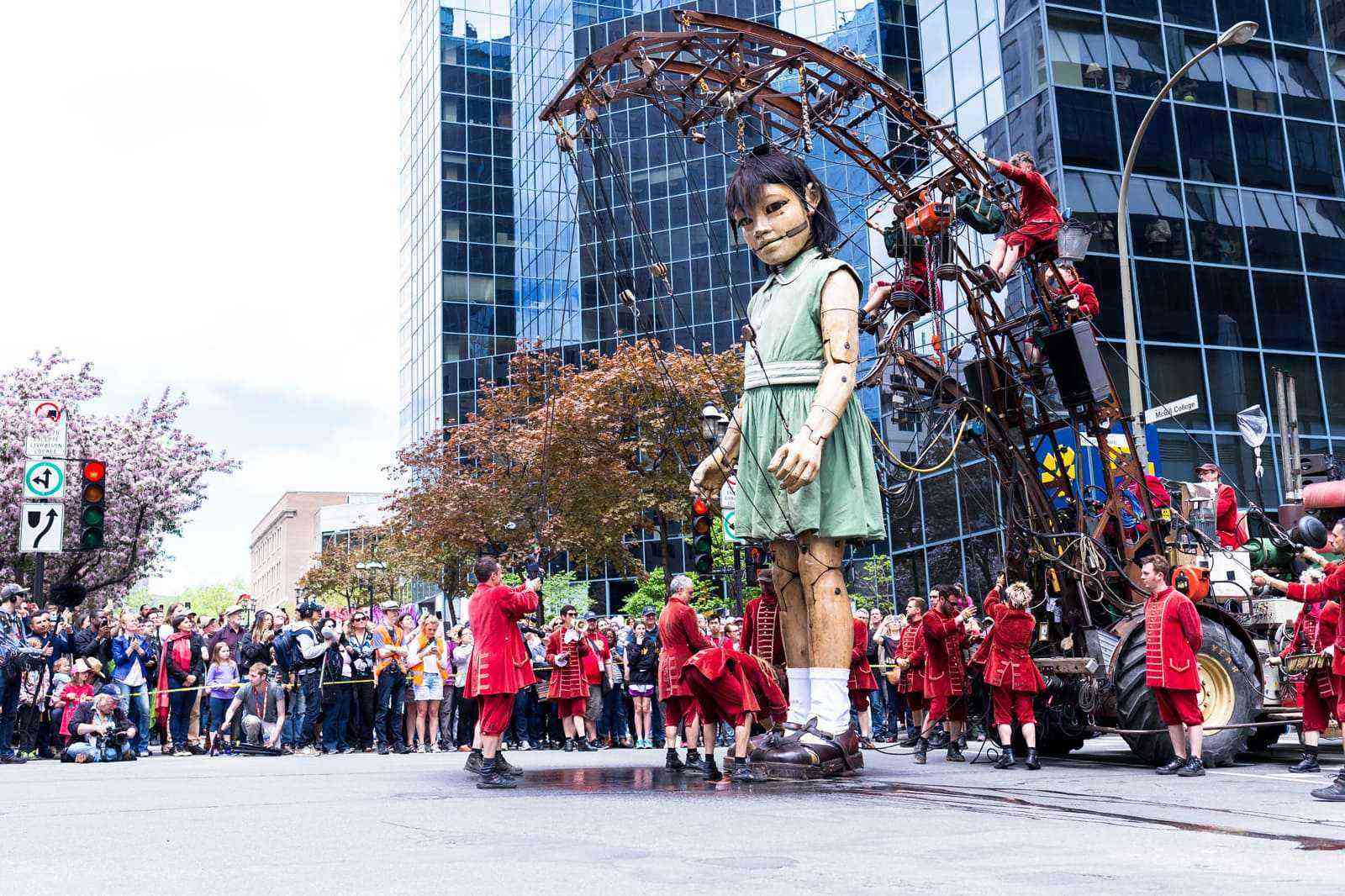 RELATED STORY
I Chased Actual Giants Through the Streets of Montreal

I Happened Upon Some Almond Paste in a Market.

I, for one, am more likely to buy almond paste if it looks like this, regardless of whether or not I know what to use almond paste for.

I Happened Upon This Man Genuinely Just Loungin’.

In a city with a normally extremely cold climate, it’s worth appreciating the act of just hanging the heck out outside. It’s summer in Montreal–this means gorgeous weather. Lounge outside while it’s warm for a few months–like this guy, hanging outside of the capital in one of the loveliest places anywhere–the Old Port.

I Happened Upon a Fancy McDonald’s.

I do love a fancy McDonald’s. Montreal didn’t disappoint. 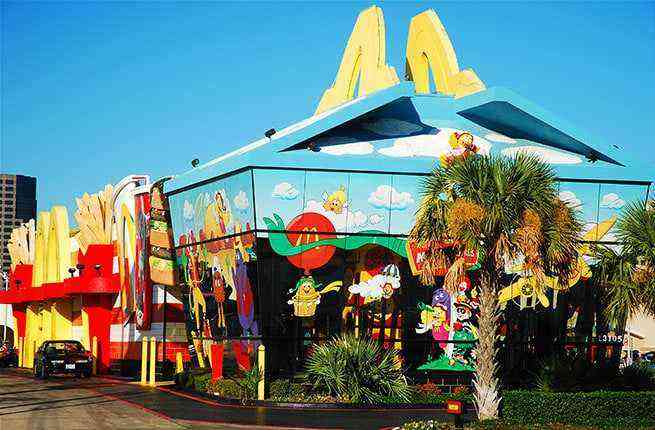 RELATED STORY
The Fanciest McDonald’s Restaurants in the World

I Happened Upon Trash.

Even the trash is better in Montreal. Okay, fine, this is part of an art exhibit, but it’s about trash–kind of (our consumerist culture, and perceptions about luxury and trash). Listen, Montreal has the ability make anything better, okay?