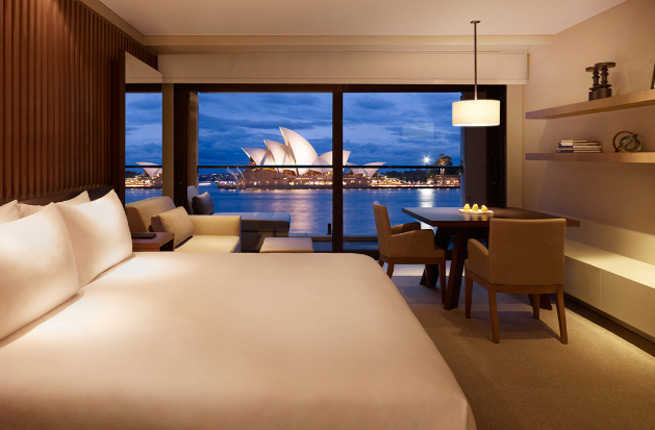 They say it’s all about location, location, location. And for hotels hoping to flaunt stunning views, locale is, indeed, of the utmost importance. Some of the best memories from a vacation can be as simple as walking onto your hotel balcony in the morning or enjoying a cocktail on the deck in the evening with an eyeful of gorgeous, unparalleled, expansive scenery. So we poked around to find the hotels around the world that boast the most mesmerizing views.

Imagine waking up in each morning and peering out your window for an eyeful of the iconic Opera House and Harbour Bridge in Sydney Harbor. Just a stone’s throw from these landmarks in Sydney, Australia, the 158-guestroom Park"> is ultra-luxe, and many rooms have private balconies overlooking the spectacular sight. Several vantage points, including the harbourkitchen&bar restaurant or the rooftop pool and terrace, have views out over the busy harbor. Guests can see it all—festivals, weddings, fireworks, or just beautiful sunsets. 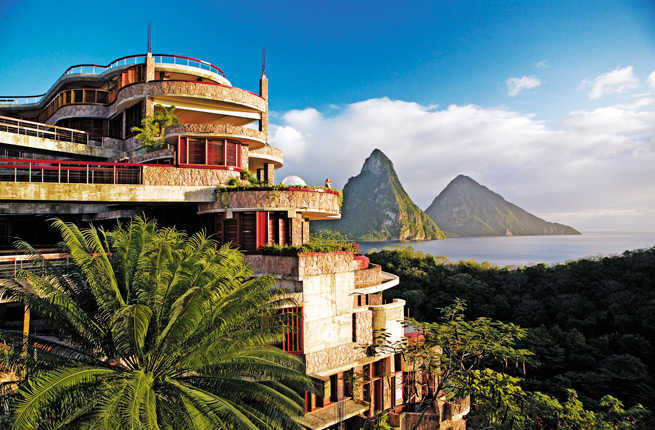 Consistently voted as one of the most romantic resorts in all of the Caribbean, Jade"> offers an unforgettably captivating view. Just picture it: While lounging in your private infinity pool, the the lush Piton Mountains and the Caribbean Sea surround you, ablaze in colors at sunset. The sweeping views are iconic and you have particularly good access to them, thanks to the lack of a fourth wall in the guest rooms. Best of all, there’s no telephone, radio, or TV to distract you. 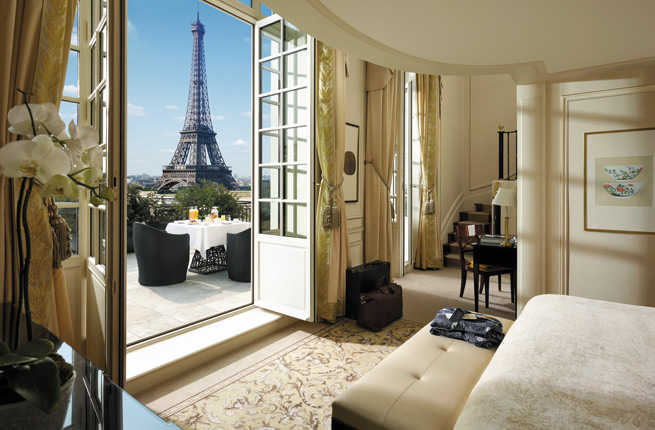 There are countless hotels in the City of Light that promise Eiffel Tower views but the Shangri-La"> took the crown when it opened in 2010. The first European property for the brand has stunning views of the Eiffel Tower, the Seine, Les Invalides, and the Louvre. Nestled in the 16th arrondissement, the elegant hotel designed by Pierre-Yves Rochon has only 81 rooms, more than half of which have direct views of the Eiffel Tower. If you really want to see Paris all its glory, check into the Suite Chaillot, a 1,650-square-foot suite that has a wraparound terrace overlooking the Eiffel Tower and Paris skyline. 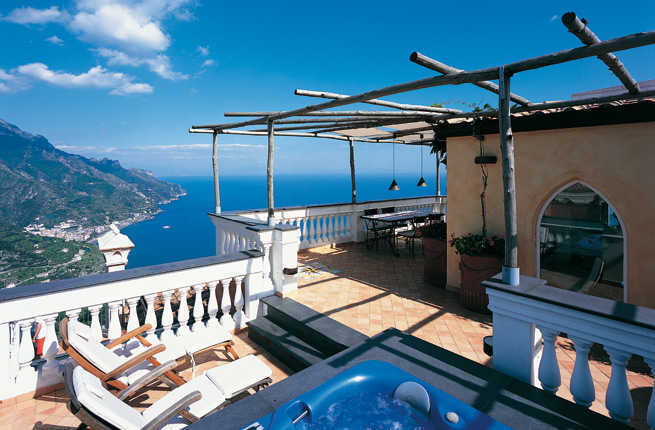 Formerly Palazzo Sasso, the"> on the Amalfi Coast is perched 1,000 feet high on a cliff with breathtaking views from every vantage point. There are only 43 rooms, making the hotel darling and intimate but the million-dollar views are its true highlight. A stay in this 12th-century building takes you back in time, thanks in part to the landscape of the resort town Ravello that has stayed almost completely unchanged for years. Take your pick: Champagne on your private balcony at sunset, rooftop lounge with a cocktail, or Michelin-stars with a view at Rossellini's. 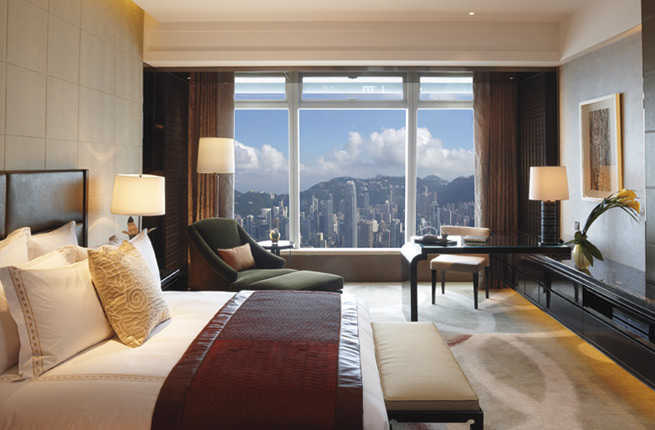 Hong Kong may be known for stellar food, culture, and nightlife, but hotel views are just as key. And the Ritz">, which opened in 2011, has the best of them. Not only is it officially the highest hotel in Hong Kong, occupying the 102 to 118th of the ICC building, but the 312 rooms deliver impressive, panoramic skyscraper views of the bustling city. It actually feels like you’re on top of the world. Want more? Have a cocktail at OZONE, the highest open-air bar in the world.

You can’t get any better than the Fairmont"> when it comes to insane panoramas of Banff">. Within the UNESCO World Heritage Site, the Fairmont offers breathtaking views of the mountains and emerald green Lake Louise and Victoria Glacier. Outdoor enthusiasts will be thrilled with the myriad outdoor activities available, like hiking, canoeing, fishing, and horseback riding, depending on the season. The hotel has been open for more than 100 years and is part of one of the most photographed landscapes in Canada. 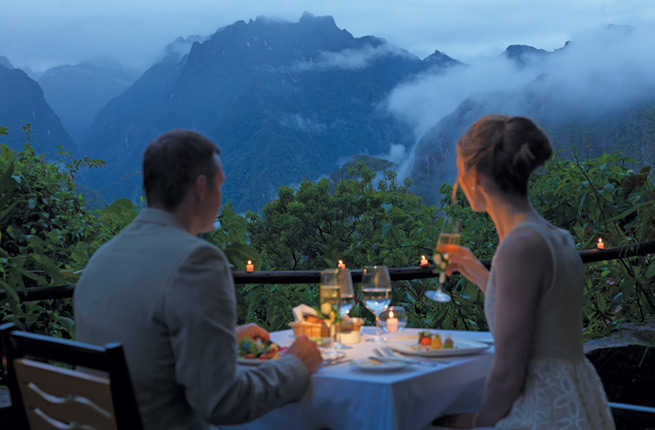 This stunning hotel is the only hotel adjacent to the ancient city of Machu">. Managed by Orient-Express, the Sanctuary"> sits in one of the world’s most famous World Heritage Sites and visitors have direct access before and after the crowds rush in. Most rooms have dramatic views of the lush Sacred Valley, which includes mountains, jungle, and the rushing Urubamba River. Best of all, it is the closest you can get to actually sleeping where the Incas once slept, 8,000 feet above sea level. 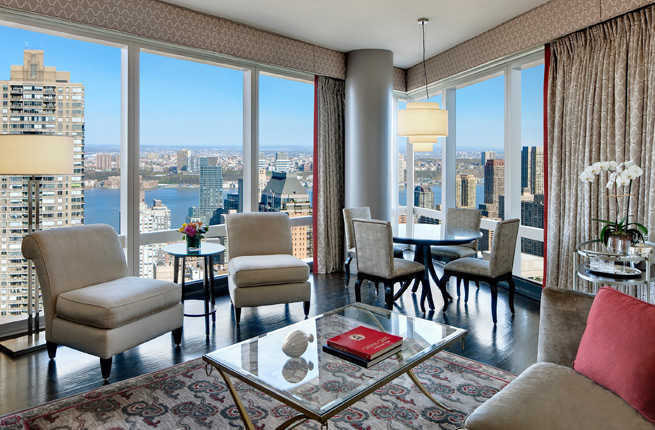 The Mandarin"> at the Time Warner Center showcases Central Park as well as the bright lights and fast cars of Midtown and even Columbus Circle all in one take. Unlike other luxury hotels, it sits atop boutique shops and celebrity-chef restaurants. The floor-to-ceiling windows in all 244 guest rooms flaunt views, whether of Central Park, the Hudson River, or the iconic glittering skyline. 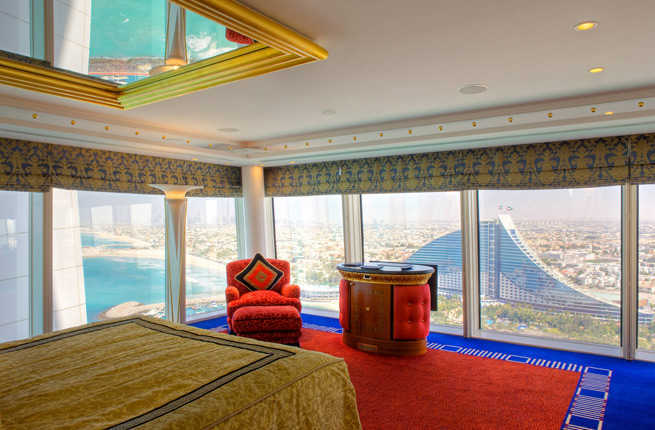 The silhouette of this sail-shaped Dubai hotel is so iconic, it is itself a view worth looking at. But of course, the Jumeirah">, the fourth tallest hotel in the world, is perhaps even better known for its expansive views of the city, its own artificial island, the Persian Gulf, and the desert. Hang out on the hotel’s man-made beachfront area and stare up to the top, before heading up to Al Muntaha on the 27th floor for lunch, brunch, or dinner paired with eye-popping views. 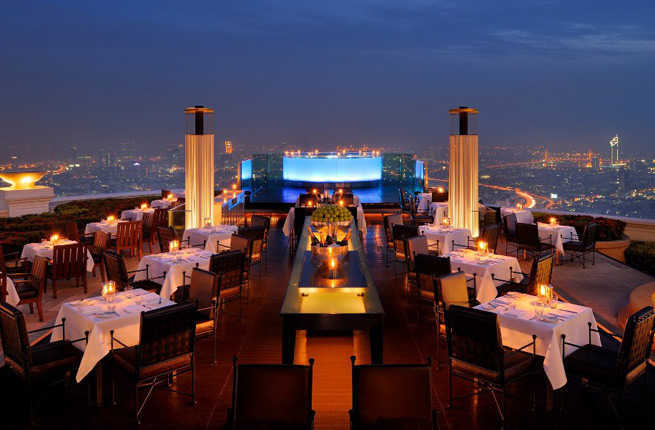 Courtesy of Lebua Hotels and Resorts

It used to be widely accepted that the Banyan Tree Bangkok boasted the city’s greatest views. But the Lebua is giving them a run for their money with its Tower Club that opened in 2007. The hotel is located on the 51st to 63rd floors of a high-rise building and has been impressing guests since its international debut in Hangover 2. Whether you’re in your room, the open-air Sky Bar, or any of the hotel’s restaurants, you’re given the perk of having a backdrop of the iconic, bustling city and Chao Phraya River.