Discover the stories fashion can tell about a place’s culture and history.

Every country retains its national identity through its unique clothing that has been passed on from generation to generation. This clothing represents the history, cultural traditions, design sensibilities, craft traditions, as well as an adaptation to local weather. It can also represent social, marital, or religious status. It’s often rooted in rich traditions and gives people a sense of continuity.

In many countries, national costumes are now only worn during festivals, ceremonies, and special occasions, but in others, like Bhutan, traditional clothing is worn in everyday life even today. Here are 13 traditional outfits and signature items of clothing from countries and cultures around the world. 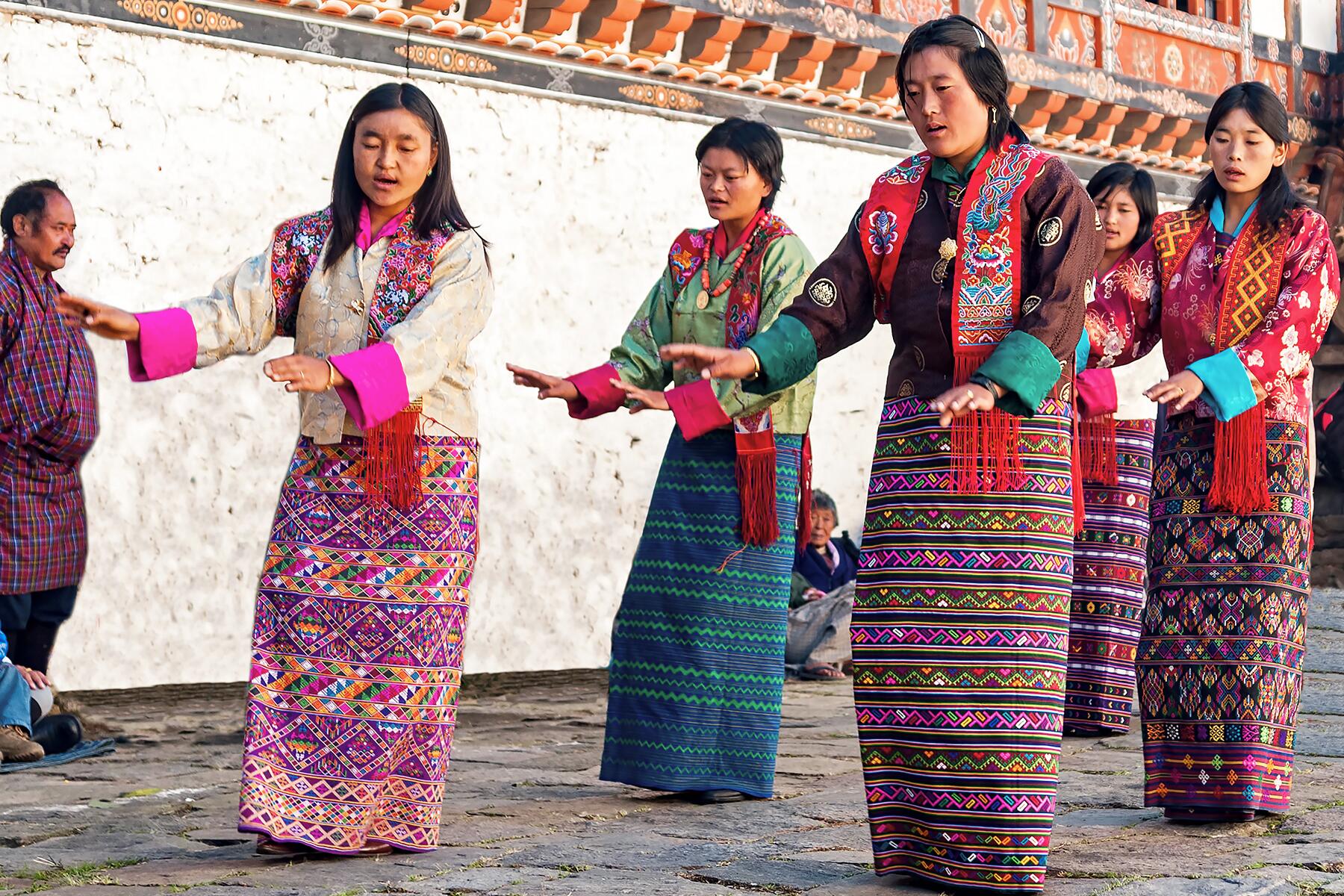 One of the most unique countries in the world, where many people wear their traditional dress every day, is Bhutan, the mountain kingdom in Asia. The  Bhutanese national dress was codified over 400 years ago in the  17th century, during the reign of Zhabdrung Ngawang Namgyal. He introduced a national dress to promote a unified identity for all of Bhutan.  In 1989, a law was passed that required all Bhutanese to wear the national dress for professional and government positions, and on formal occasions.

Today you find men all over the country in the traditional knee-length gho tied at the waist with a cloth belt and the women in the kira, a long, woven fabric that is wrapped and folded around the body and is pinned at both shoulders (usually with silver brooches), complemented with a blouse and jacket. For formal wear, men use a silk shawl, draped over the gho. For special occasions, the Bhutanese men also wear special boots traditionally made of leather and silk, which are richly embroidered. 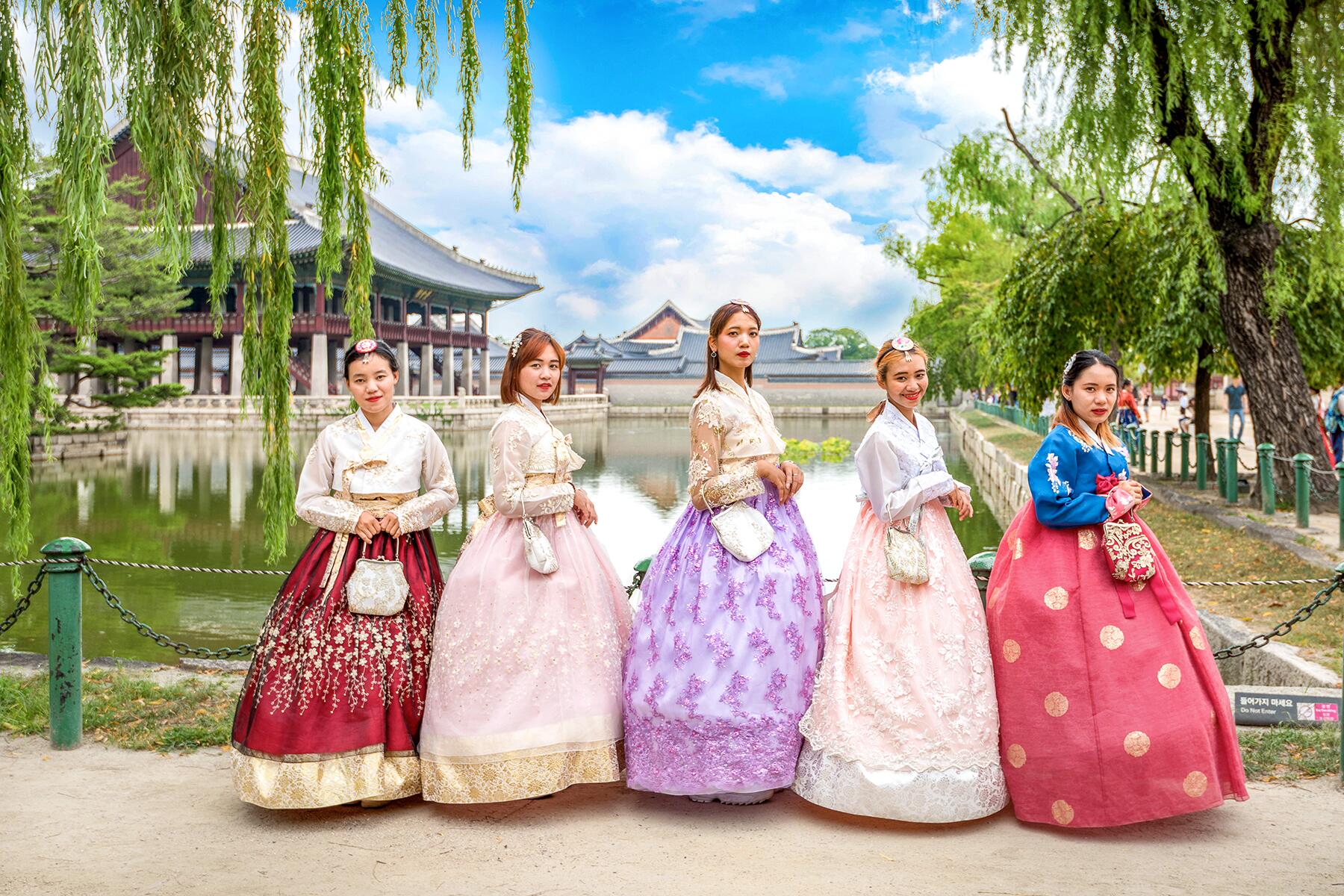 South Korea’s traditional costume, the hanbok, has a colorful history. The two-piece outfit is worn on formal or semi-formal occasions and events such as festivals, celebrations, and ceremonies. It has a wrapped front top, long, high-waisted skirt, and it’s typically in vibrant colors. The women’s hanbok is comprised of two parts: the jeogori (a blouse or jacket) and the chima (a full, wrap-around skirt). Men’s hanbok also includes the jeogori and is paired with loose-fitting baji (trousers).

The hanbok was said to have originated during the Goguryeo Kingdom (37 BCE- 668 CE), and the design has remained almost the same until today. Hanboks are traditionally made in vibrant colors that correspond with the five elements of the yin and yang. Colors also indicated social position and marital status—commoners, for example, wore white. Patterns on the hanbok indicate wishes of the wearer with motifs from dragons and peonies to lotus flowers and even bats. Modern reinterpretations of the hanbok have made a splash on the catwalks of famous fashion shows around the world. In 1996, the Korean government named October 21 “Hanbok Day.” 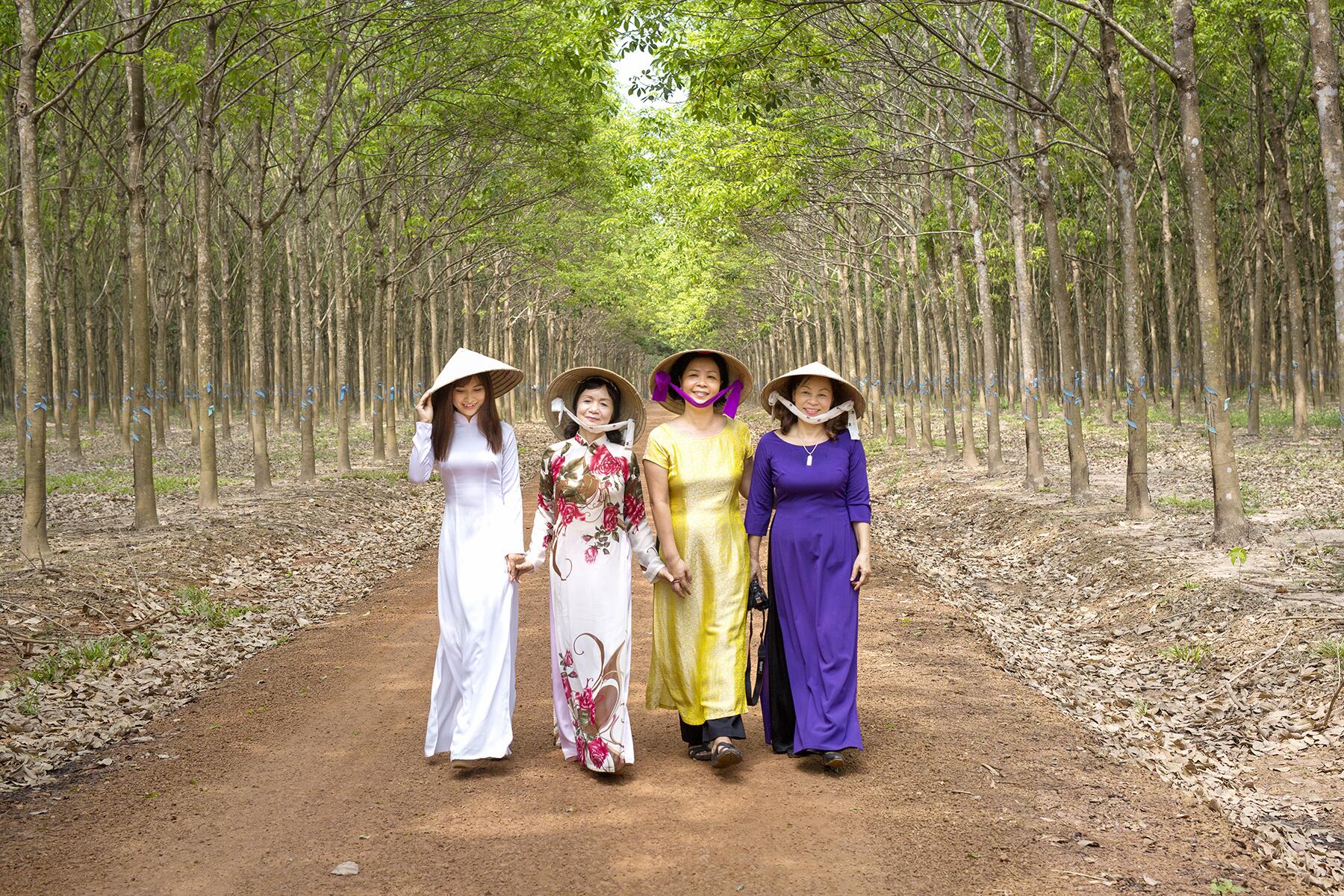 Ao dài (meaning “long shirt”) is the national costume of Vietnam, symbolizing elegance. The typical female áo dài is a tight-fitting long silk dress with long sleeves and a mandarin neckline that is worn over long pants and paired with a conical hat, known as a non la.

Modern versions of the áo dài are more breathable than the ancient áo dài and made of different fabrics from lace to silk. The word “áo dài” was originally used in the 18th century, during the Nguyen dynasty when Chinese-style clothing was prescribed. It was inspired by outfits worn by the Chams or the people of Champa, an Indochinese kingdom which lasted from the 2nd to the 17th century, in what is now southern Vietnam.

During French rule, the outfit was redesigned as a modern dress, with some Western silhouettes. Today many women in Vietnam wear the áo dài both for work and everyday occasions, as well as special celebrations. 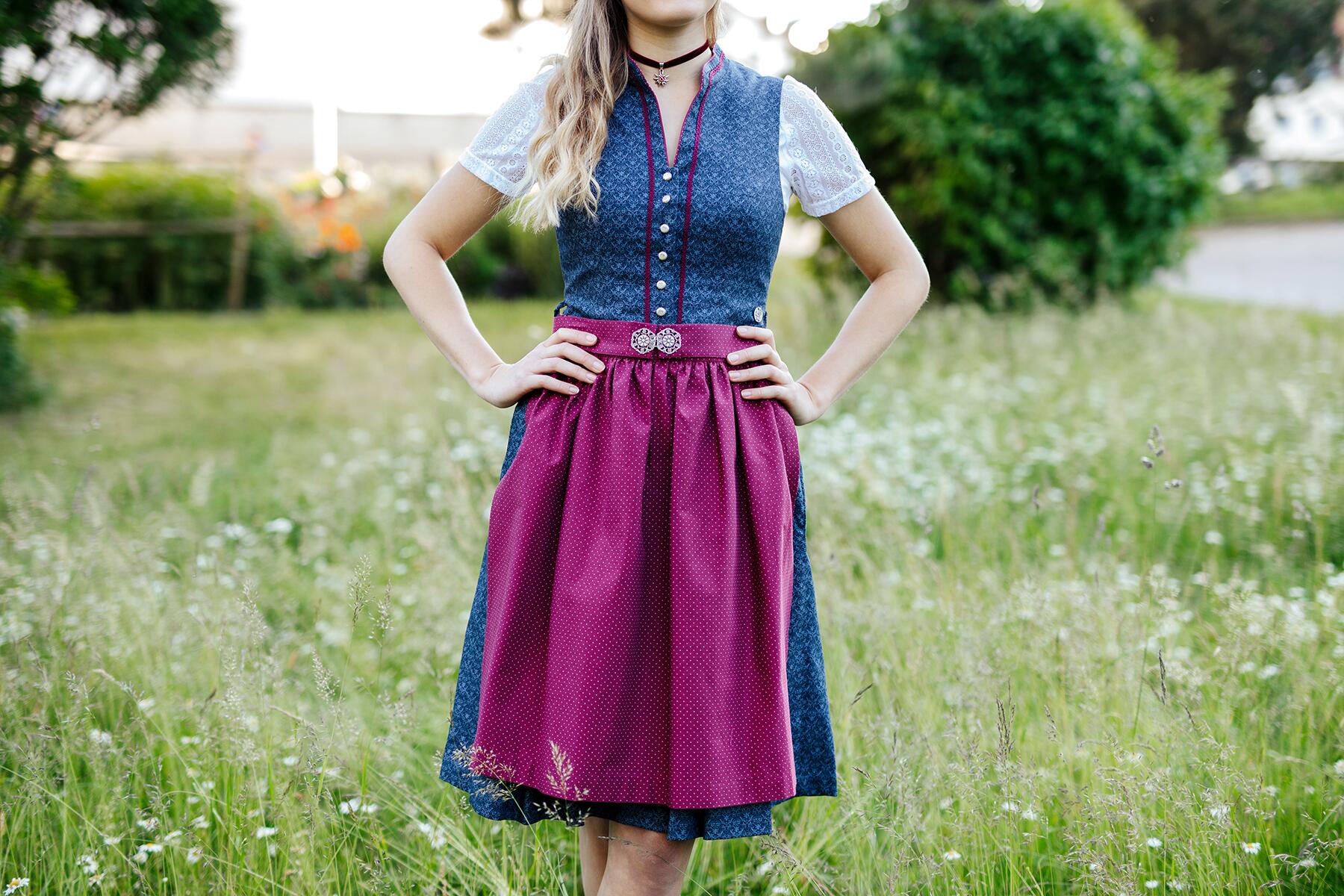 A dirndl consists of a close-fitting bodice featuring a low neckline, a blouse worn under the bodice, a high-waisted skirt, and an apron. The garment is associated with the Alpine regions of southern Germany, Austria, Liechtenstein, Switzerland, and Italy. Between the 16th and 18th centuries, it became the dress of peasants in these regions. The outfit is usually made of cotton, velvet, linen, or silk, which is embroidered. Though a dirndl started off as a work costume, it became a fashion statement among the aristocracy during the 18th century. After World War II it lost its popularity but now again it’s experienced a resurgence especially in traditional German festivals like Oktoberfest. 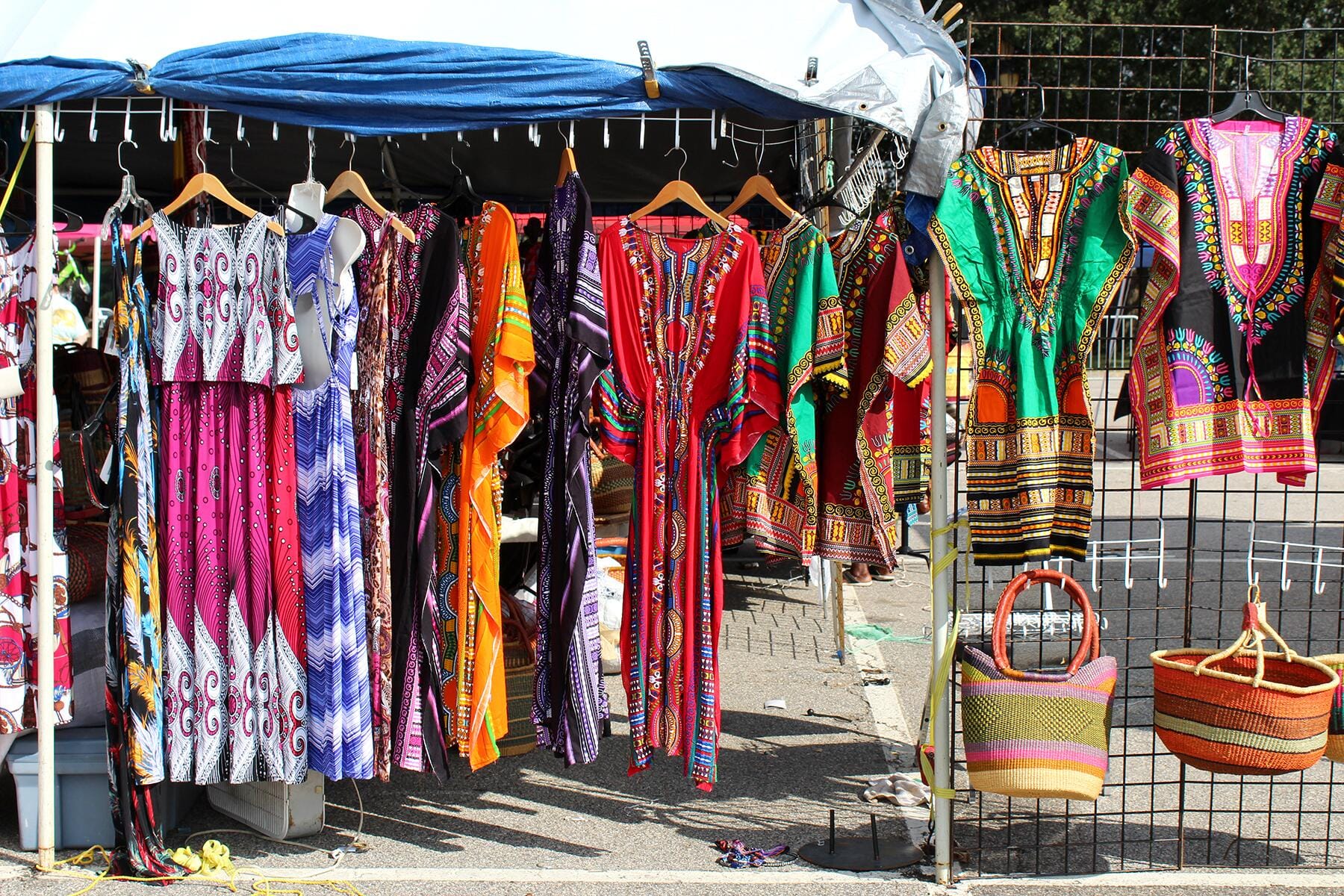 The loose-fitting colorful shirt in bright African-inspired cotton prints or from solid color fabrics, with a v-neck for men and women, called a dashiki, is worn mostly in West African countries like Nigeria. Sometimes they are worn with matching trousers. It is called kitenge in East Africa. The Yoruba people borrowed the word from the Hausa word dan ciki meaning “underneath,” which refers to a short tunic worn by men under long robes. A dashiki is unisex with women sometimes wearing dashiki dresses. 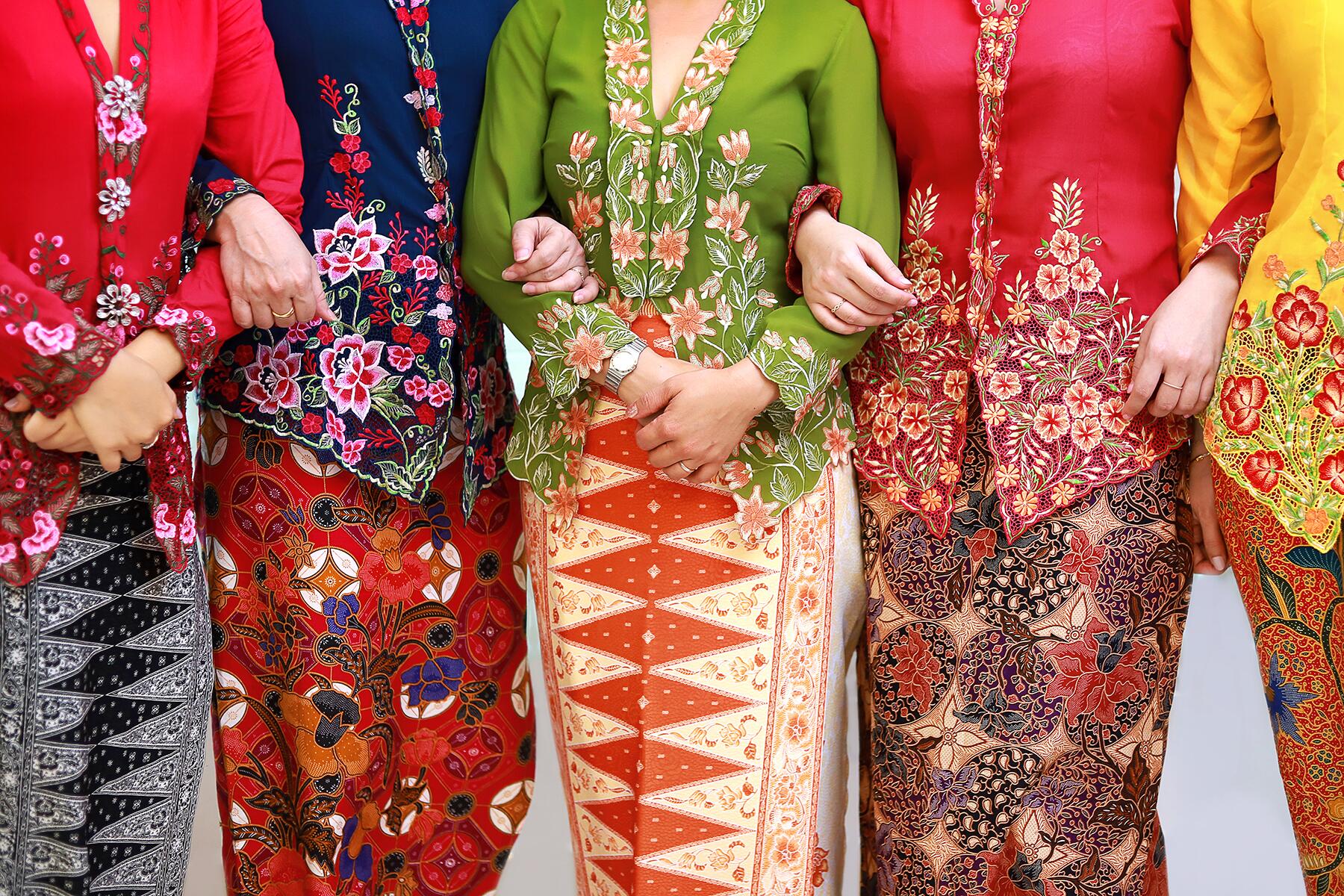 The kebaya (usually worn with a sarong) is a traditional Indonesian and Malaysian blouse-dress combination that was first worn in the court of Java. It is the national costume of Indonesia and is also worn in Singapore, Brunei, and the Philippines. The female flight attendants of Malaysia Airlines and Singapore Airlines also wear kebaya-style uniforms. The blouse is usually made from lace, semi-transparent nylon, or cotton with floral patterns, usually fastened by a brooch. The kebaya has been influenced by some European elements, attributed to Portuguese and Dutch colonization in Malacca. Indonesia is making efforts for kebaya to be recognized as an Intangible Cultural Heritage to the UNESCO. 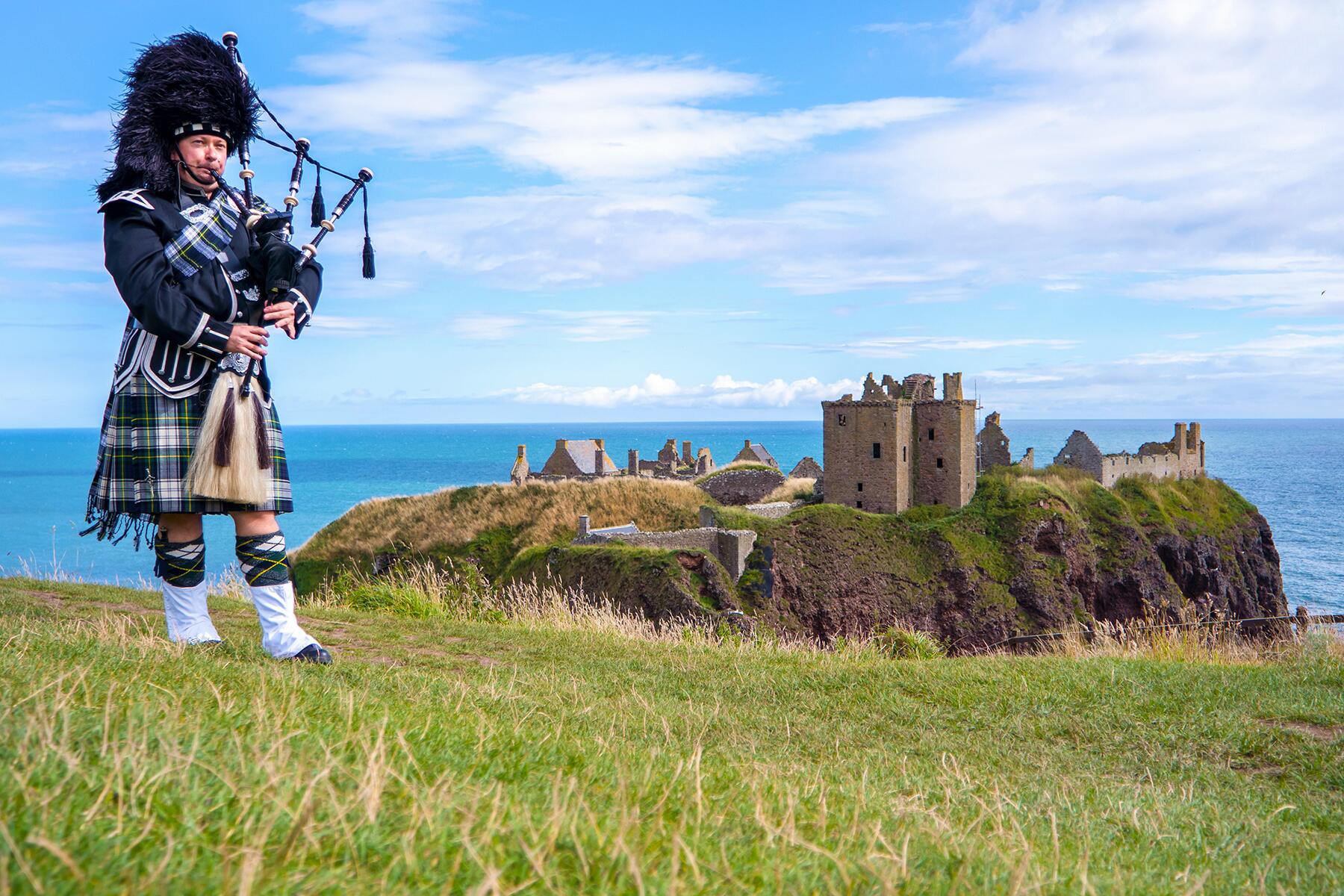 The knee-length garment with pleats at the back, worn by Scottish men, originated in the Scottish Highlands and was first recorded in the 16th century. The kilt made of woolen cloth in a tartan pattern is worn by some Scottish men on formal occasions, ceremonial gatherings, festivals, and family parties. The kilt is made of layers held together with a kilt pin. The kilt is usually worn with woolen socks, sturdy leather shoes, and a sporran (a pouch that hangs from around the waist by a chain). Kilts have also been adapted by women for occasions like sports and dancing. The various plaids represent the colors of the particular clan that the wearer belongs to. Today the kilt is a symbol of Scottish national pride. 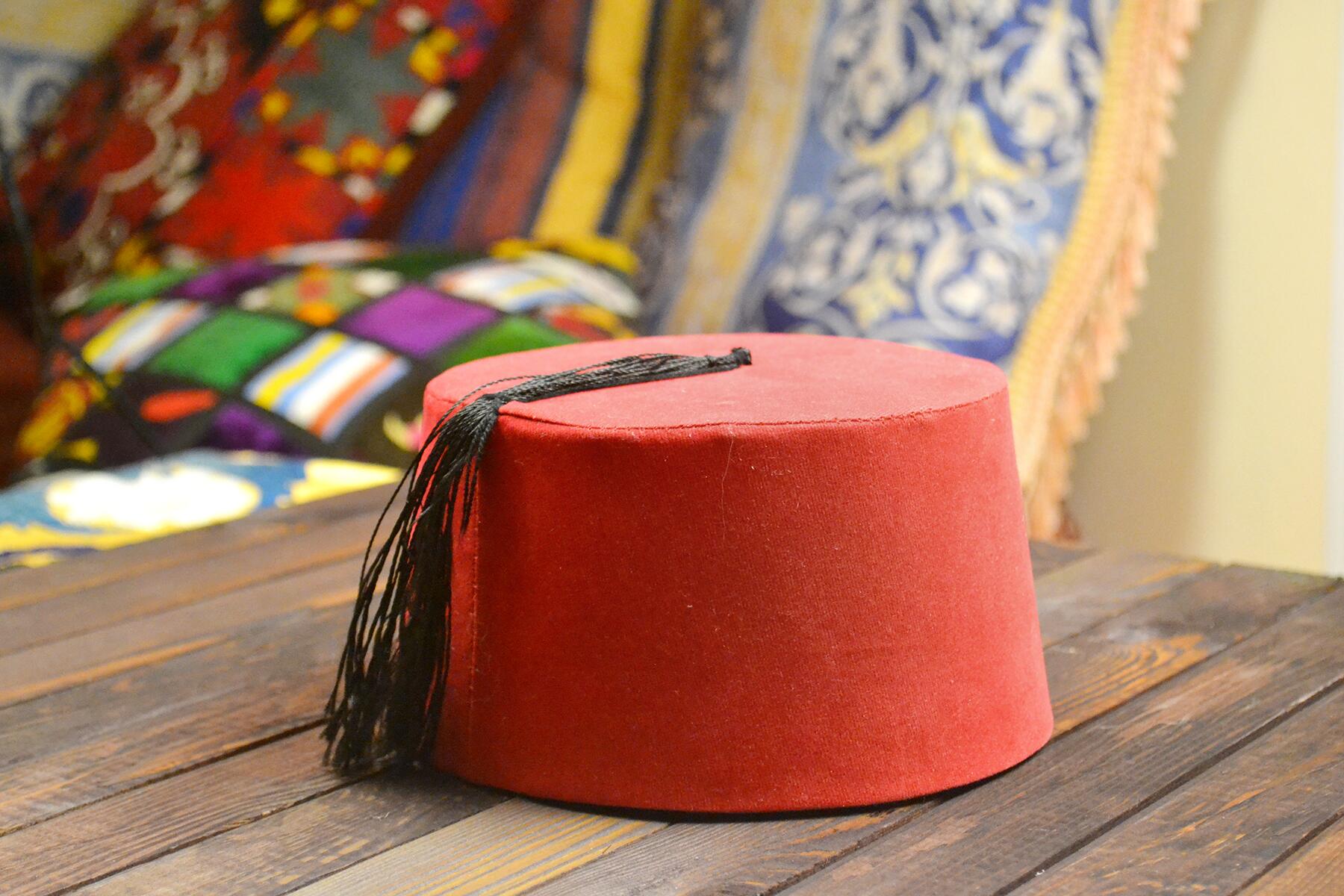 The cylindrical headdress with a tassel, usually in red, is called a fez. This flat felt hat gets its name from the city of Fez in Morocco, where the dye used to be obtained from crimson berries. In Morocco, it was seen as a cultural symbol against French colonization. From here the Fez spread to many Muslim countries in the Ottoman Empire where it was convenient to wear when the men put down their heads in prayer. In 1925, Kemal Atatürk banned it in Turkey amid his modernizing reforms. Fez hats are also called Rumi hats as the famous Turkish poet Melwana Jalaluddin Rumi often wore one. 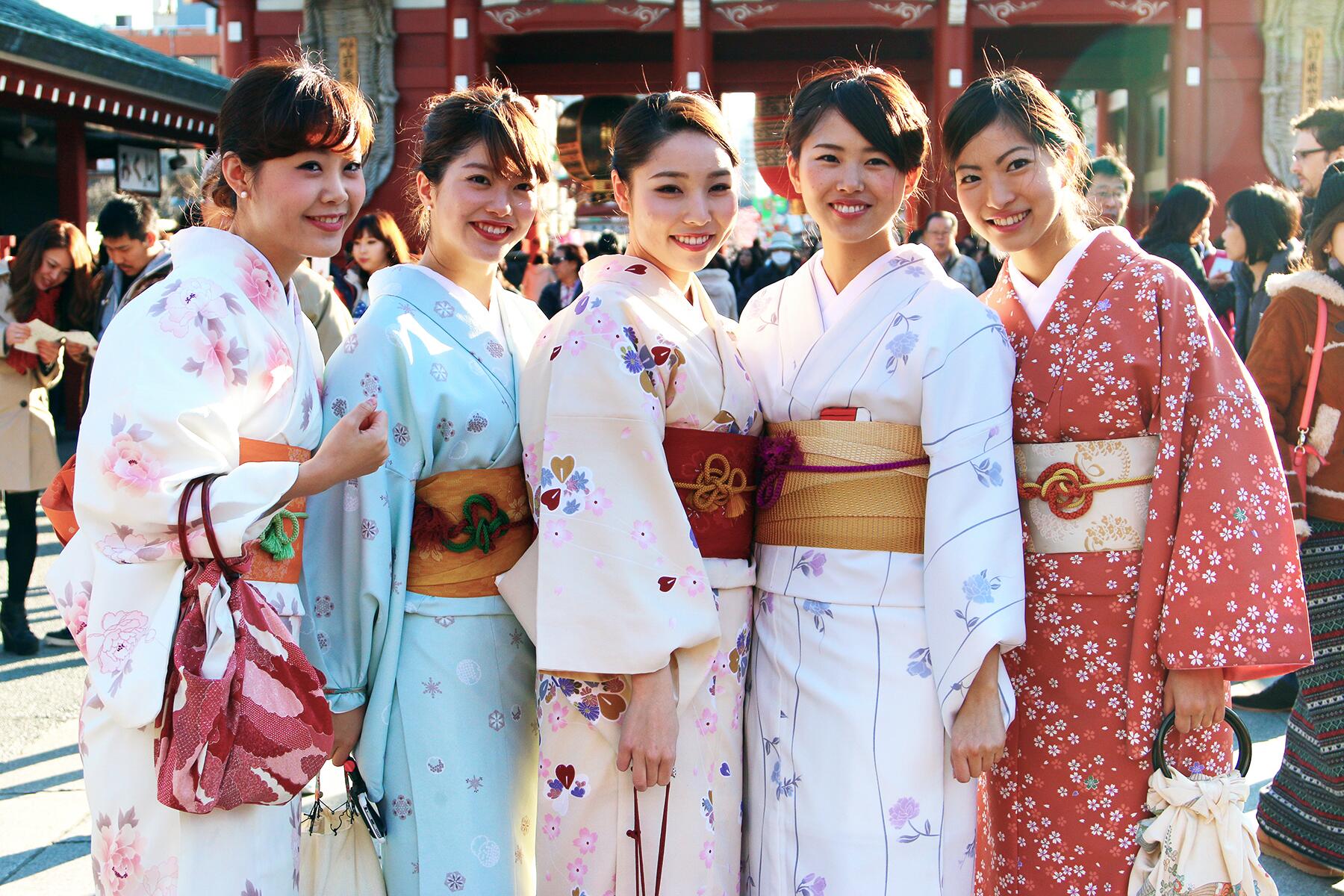 Having originated during the Heian period (about 794 to 1192 AD), the kimono is one of the oldest national costumes still in use. In its early iterations, it was worn primarily by noblewomen. But during the Edo period, starting in the early 1600s, the kimono became very popular with everyone and was even featured in kabuki shows. During the Meiji era (1868-1912), when the government decreed that citizens had to wear Western clothing to keep up with the country’s fast-paced Westernization, the kimono slowly disappeared. Today it is mainly worn during ceremonial occasions such as weddings or funerals. The kimono has different versions—the simple yukata is made of thin fabric like cotton, linen, or hemp and is casual home-wear. The furisode in bright colors and long sleeves with electric motifs is usually a family heirloom gifted to a woman in marriage. 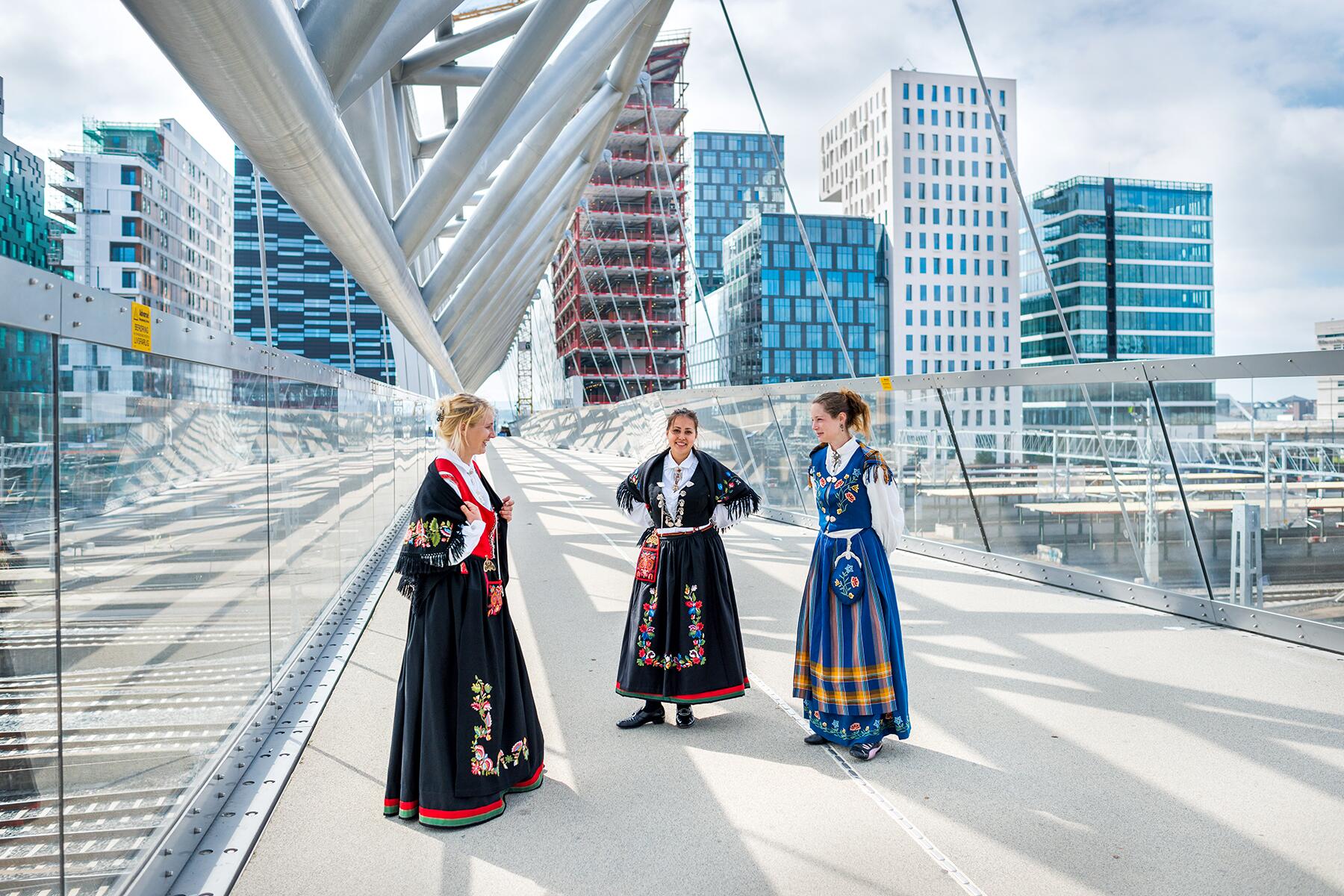 The bunad is a tight-fitting woolen folk costume worn throughout Norway and is adorned with metal buckles, buttons, and jewelry. The bunad is not an everyday garment—it’s worn for various celebrations including weddings, birthdays, and folk dances as well as religious ceremonies like baptisms. Designs vary from region to region with as many as 200 varieties. One of the best-known bunads is from Nordland. The version for women is typically a blue dress with embroidered floral patterns on the skirt and top, worn with a shawl. The men often wear dark blue stockings, a  brocade vest, and a collared shirt. The bunad takes cues from traditional folk costumes dating back a few hundred years, but it is a 20th-century invention that was meant to rekindle interest in Norwegian heritage and pride. 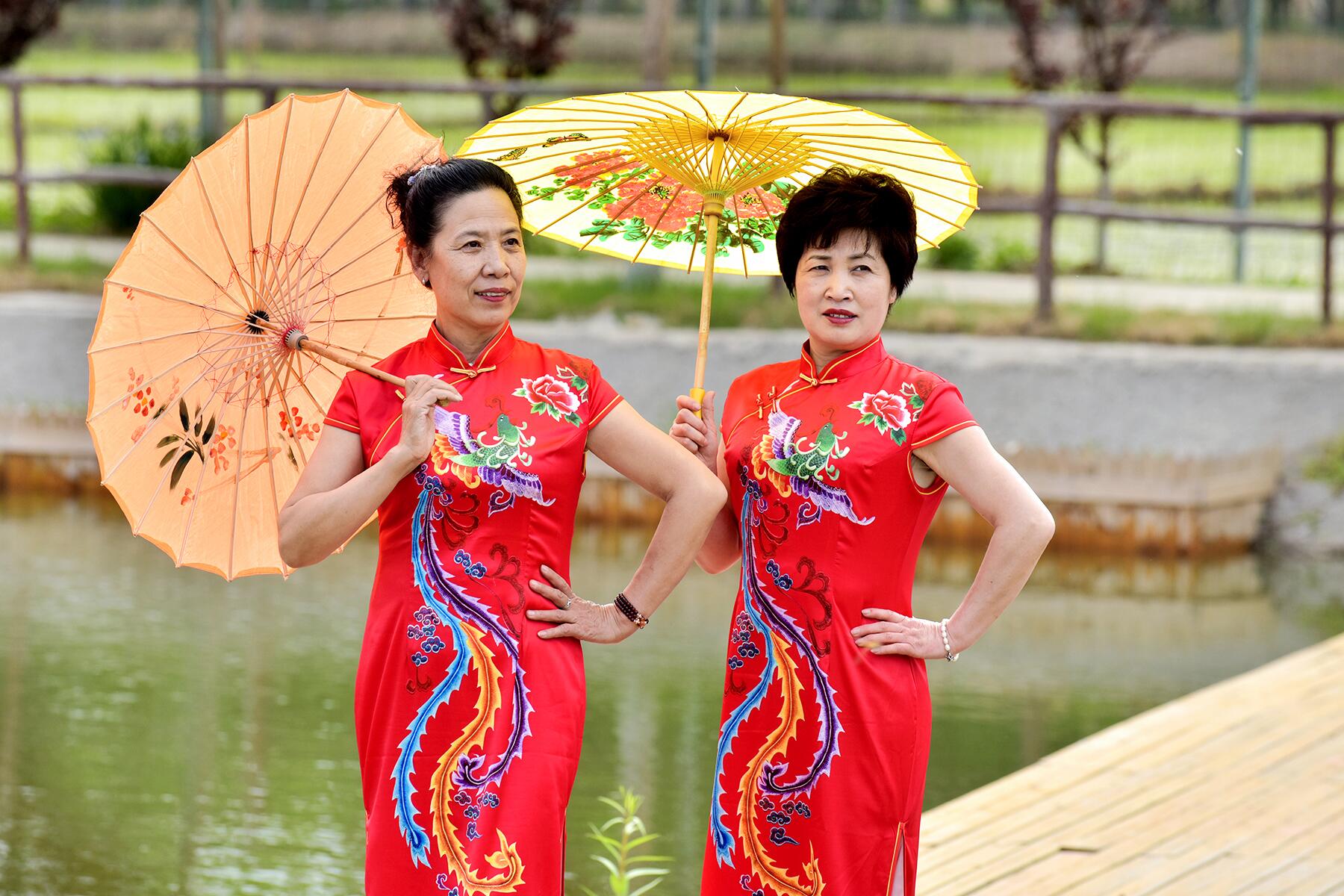 The high necked, close-fitting dress with a slit in the skirt is usually made from Chinese silk and originated during Manchu rule in China during the Qing dynasty in the early 1600s. The typical cheongsam in China today was popularized by the socialites in Shanghai from the 1920s to the 1940s. Though the cheongsam’s popularity in Shanghai waned during the Communist Revolution, the style spread to Taiwan and Hong Kong. Since the 1980s, the cheongsam was again popularized in China in beauty shows and pageants and worn by brides for weddings. Today cheongsams are worn for festive occasions like Lunar New Year or family celebrations. 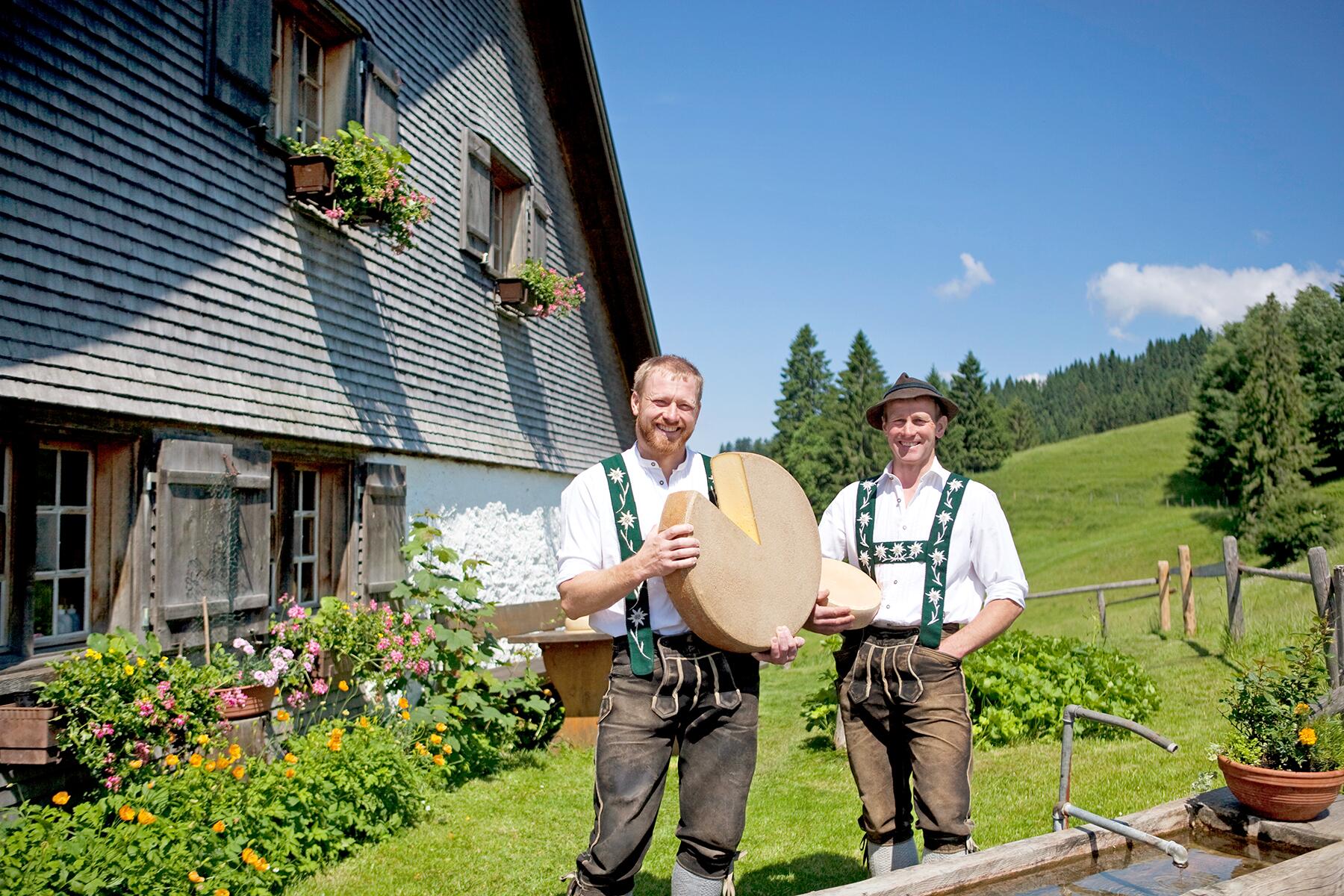 Lederhosen–the knee-length leather breeches worn in Germany by men–was historically workwear across Central Europe, particularly associated with Bavaria and the Tyrol region. They used to be worn for hard, physical labor outdoors as they were more durable than cloth, but today they have become leisurewear. The lederhosen is associated with virility and is considered a symbol of masculinity. Traditionally they were made of deer leather, but today there are many versions made from cheaper leather. Today, some German men wear it when they are outdoors, gardening, hiking, or going to beer gardens and festivals. 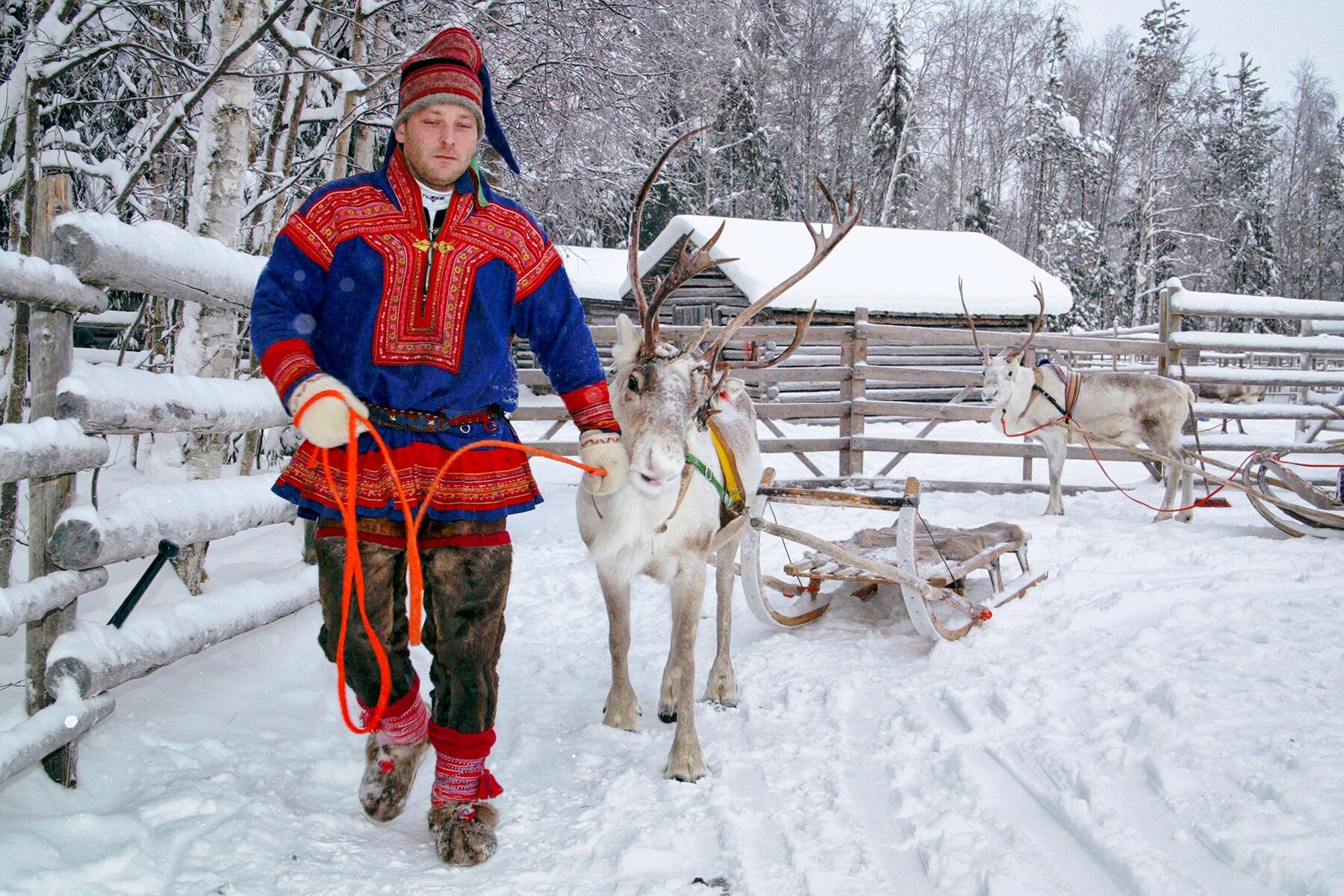 The gákti is a loose tunic, belted around the middle, and is usually made from reindeer skin and fur. The gákti is a unisex garment worn by the Sámi, the indigenous people of the northern areas of Norway, Sweden, Finland, and Russia (a cultural region known as Sápmi). The Sámi have fought hard for recognition of their rights, lands, language, and culture, so the gákti is a big symbol of their identity. It is usually worn on ceremonial occasions as well as herding reindeer. Usually, it’s in bright colors with distinctive pewter embroidery.

Women’s gákti typically consist of a dress, a fringed shawl, and boots made of reindeer fur or leather worn with beautifully decorated silver jewelry. Usually, the clothes are made in deep blue, signifying the ocean which is integral to their existence as a source of fish. The gákti differs from region to region with symbols that indicate his or her home region, family, and marital status.