Blackbeard is the most well-known pirate to roam the Seven Seas. This year is the 300th anniversary of the end of his reign of terror, celebrated throughout the U.S.

November 22, 2018, is the 300th anniversary of the death of infamous pirate Blackbeard, who trolled the Caribbean and the colonies, including the modern-day Carolinas. He is part of the cultural lexicon and lore for his rumored buried treasure and iconic facial hair. Originally a privateer, a sort of captain for hire, he later captured the slave ship he renamed Queen Anne’s Revenge in Martinique in 1717. It was a name he would forever be associated with until his untimely death a year later. Relive the Golden Age of Piracy around the United States by following in Blackbeard’s footsteps and visiting places he might go if he were here today. 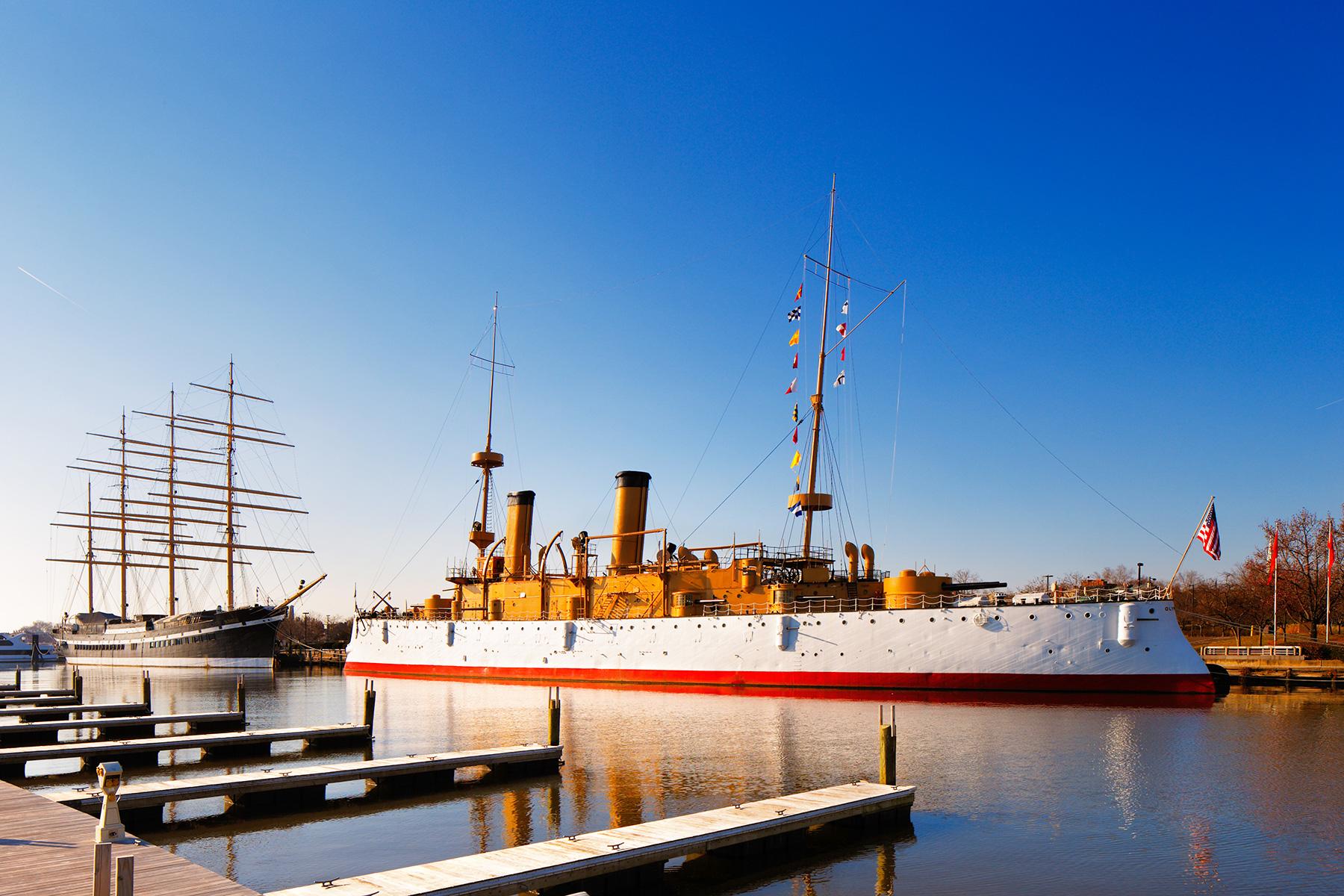 According to historians, pirates roamed the Delaware River around Philadelphia in the 1700s, making themselves at home in the city’s taverns. It was here that Blackbeard, and fellow pirate Stede Bonnet, ambushed merchant ships to steal their goods. The British government stepped in since trade was being affected, so Blackbeard headed south for the winter, stopping briefly in South Carolina. Learn about the colonial city’s seafaring past at the Independence Seaport Museum, located on the Penn’s Landing waterfront. In addition to the life-sized model ships and two historic landmark ships, the museum has boatbuilding demonstrations, maritime artwork, and artifacts from the region and beyond. Don’t miss the “Pirates & Patriots” exhibit, which showcases items from their collection not on regular display.

INSIDER TIPIf weather allows, rent a kayak to see the museum from the water or grab a pint at the beer garden at The Admiral’s Tavern, a pop-up bar on the Cruiser Olympia, the world’s oldest steel warship still afloat. 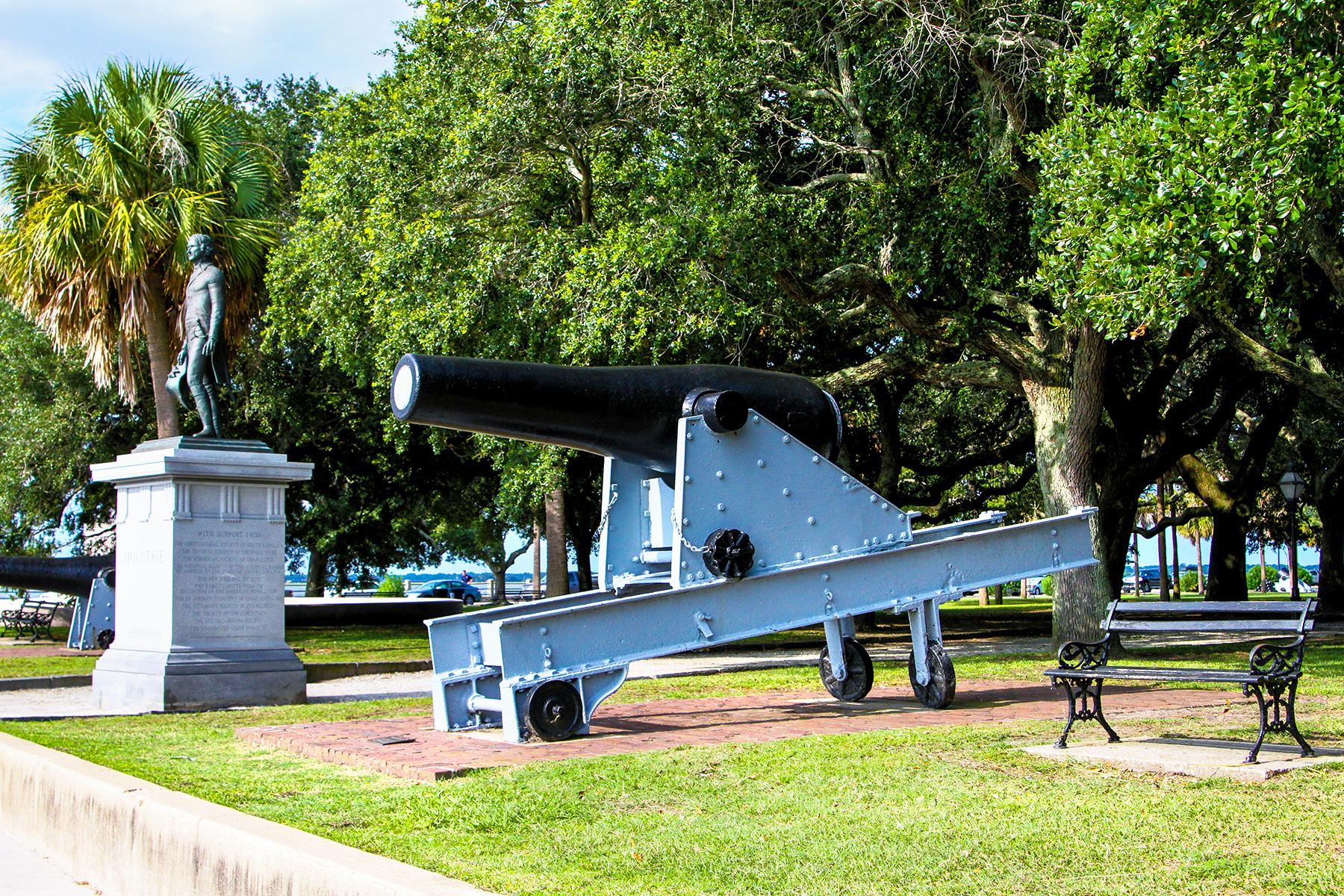 In May 1718, fresh off his time pillaging Caribbean islands, Blackbeard arrived in the Holy City. It was here that he used his ship, along with three smaller sailboats, to blockade the Charleston Harbor, taking prisoners from incoming ships and demanding medicine. Once it was received, he left, but fellow pirate Stede Bonnet wasn’t so lucky. Known as the “gentleman pirate,” Bonnet sailed with Blackbeard and was later pardoned by North Carolina governor Charles Eden. He returned to piracy after a short break and was targeted by South Carolina governor Robert Johnson. After a battle and escape, Bonnet was captured, held at the Old Exchange Building & Provost Dungeon, and hung at White Point Gardens, commonly known as “The Battery.” Visitors can see the harbor from Blackbeard’s viewpoint on harbor tour, pay respects to Bonnet at The Battery, and hear tales of other pirates to plague the city on one of the many pirate tours.

INSIDER TIPWhile McCrady’s Tavern didn’t open until 1778, well after the death of Blackbeard, it’s the oldest restaurant in Charleston, even hosting George Washington in 1791. It’s the perfect place to toast Blackbeard while dining on the much-praised menu. 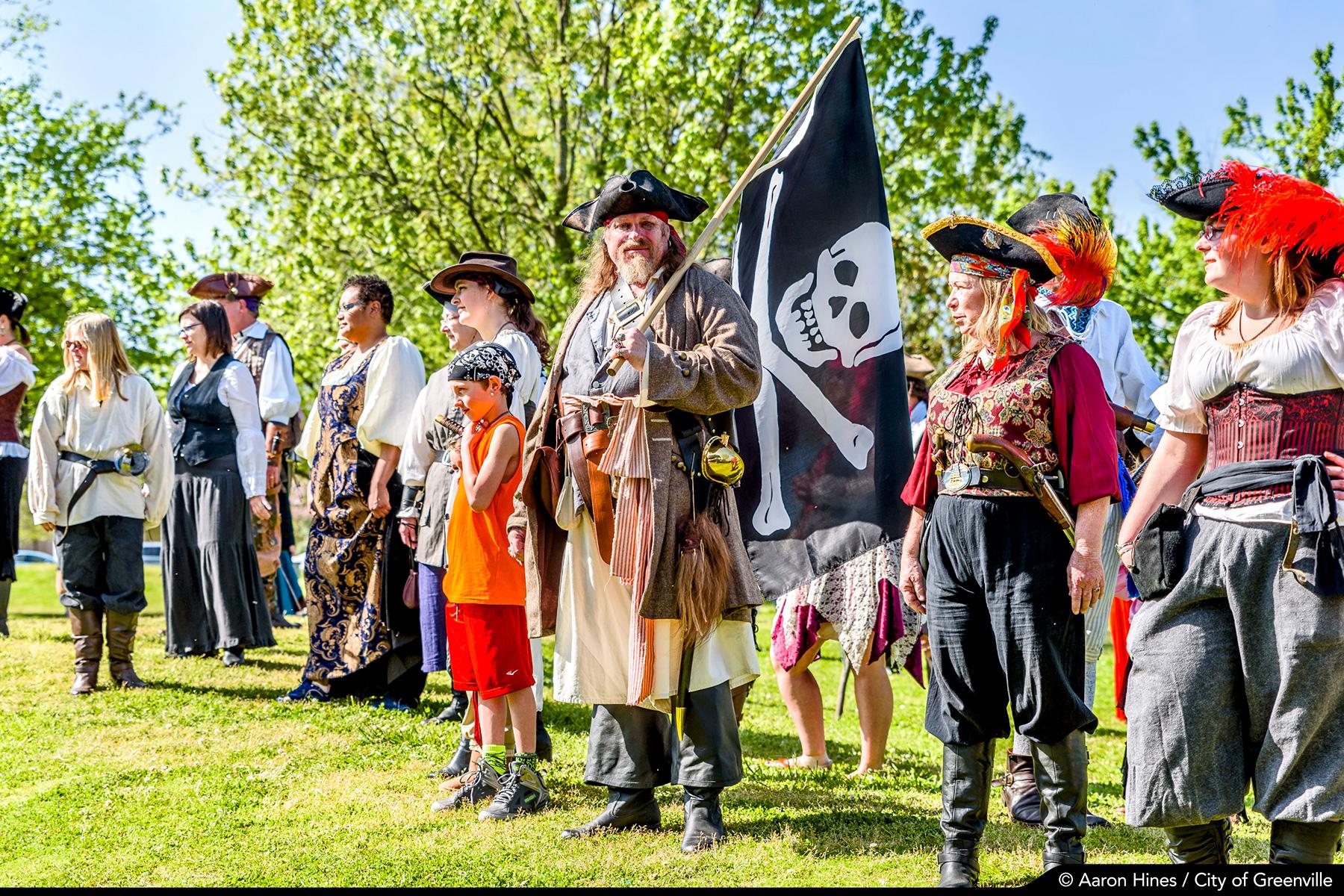 After over a century of sitting on the ocean floor, Blackbeard’s Queen Anne’s Revenge was discovered by divers in 1996. With it came a treasure trove of artifacts, including cannons, a signal bell, and pewter flatware. These items have been restored at the Queen Anne’s Revenge Conservation Lab. Operated by East Carolina University’s West Research Campus, the facility offers free behind-the-scenes tours for curious visitors every month, showing off their hard work and educating on their methods and technology. Every April, the town hosts Piratefest, a celebration of the seafarers.

INSIDER TIPBlackbeard artifacts are on display throughout the state and beyond, including the North Carolina Museum of History in Raleigh and the Smithsonian Institution in Washington DC. 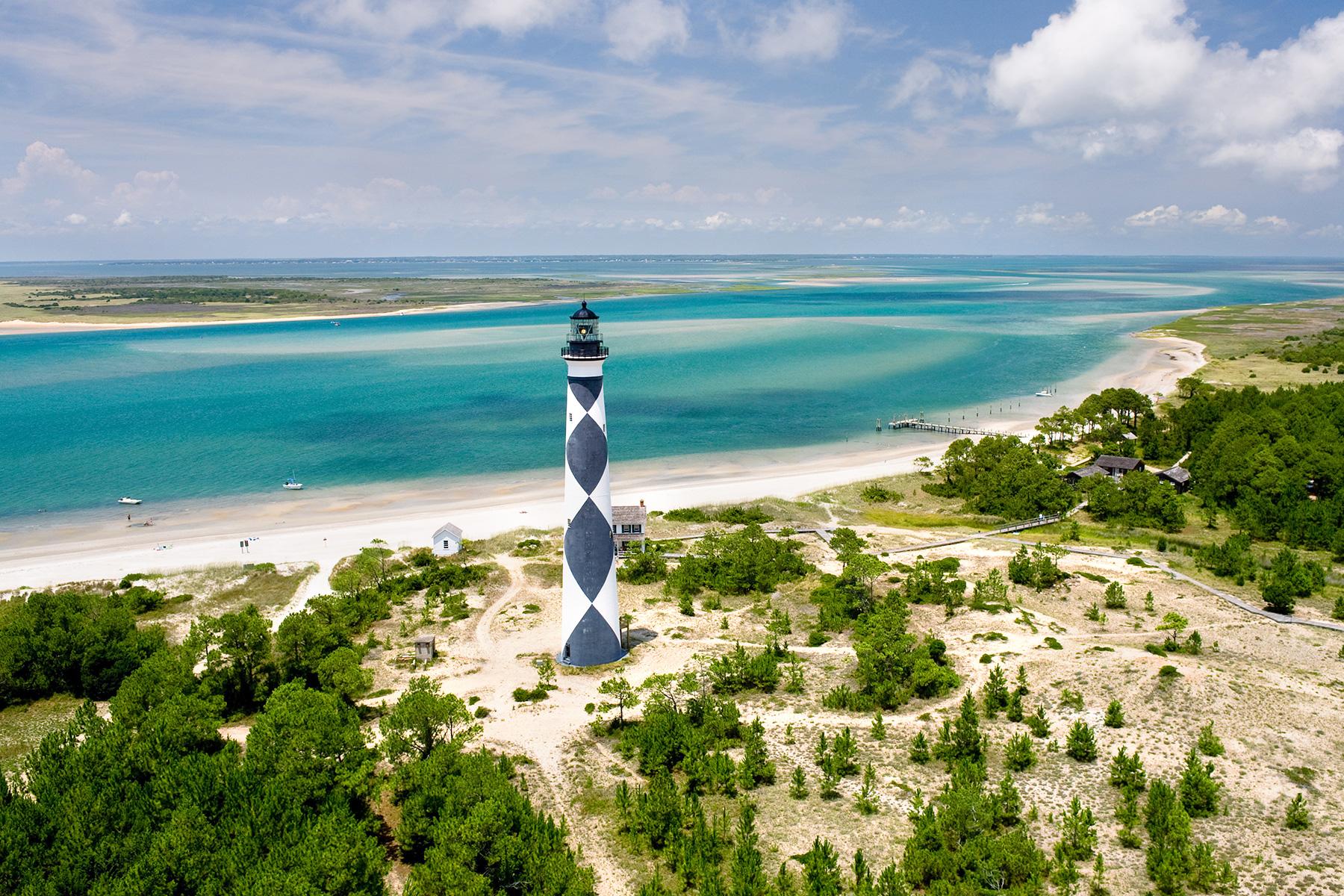 PHOTO: The Zimmerman Agency
4 OF 12

The colonial town of Beaufort was built in 1715 on the site of a Native American village at the confluence of the Atlantic Ocean and Newport River. Many of these houses and buildings remain, including ones where Blackbeard set up his base. The Hammock House was his headquarters and is the oldest building still remaining in town. It was originally constructed as an inn but was later used as a private residence, home for Union soldiers, and school. The pirate’s use for the building is unknown, but it is associated with a number of ghost stories from over the years. It’s now privately owned, but a sign tells travelers about the history. The North Carolina Maritime Museum, which has three locations around the state, is the where items found on Queen Anne’s Revenge are put on display with a free interactive exhibit, telling the story of Blackbeard and the shipwreck. It has exhibits on coastal life, the seafood industry, and lighthouses. There’s also a Blackbeard and pirate-themed tour of Beaufort.

INSIDER TIPCertified divers can book an excursion with a Beaufort dive shop to see the shipwrecks on the ocean floor that make this the “Graveyard of the Atlantic.” 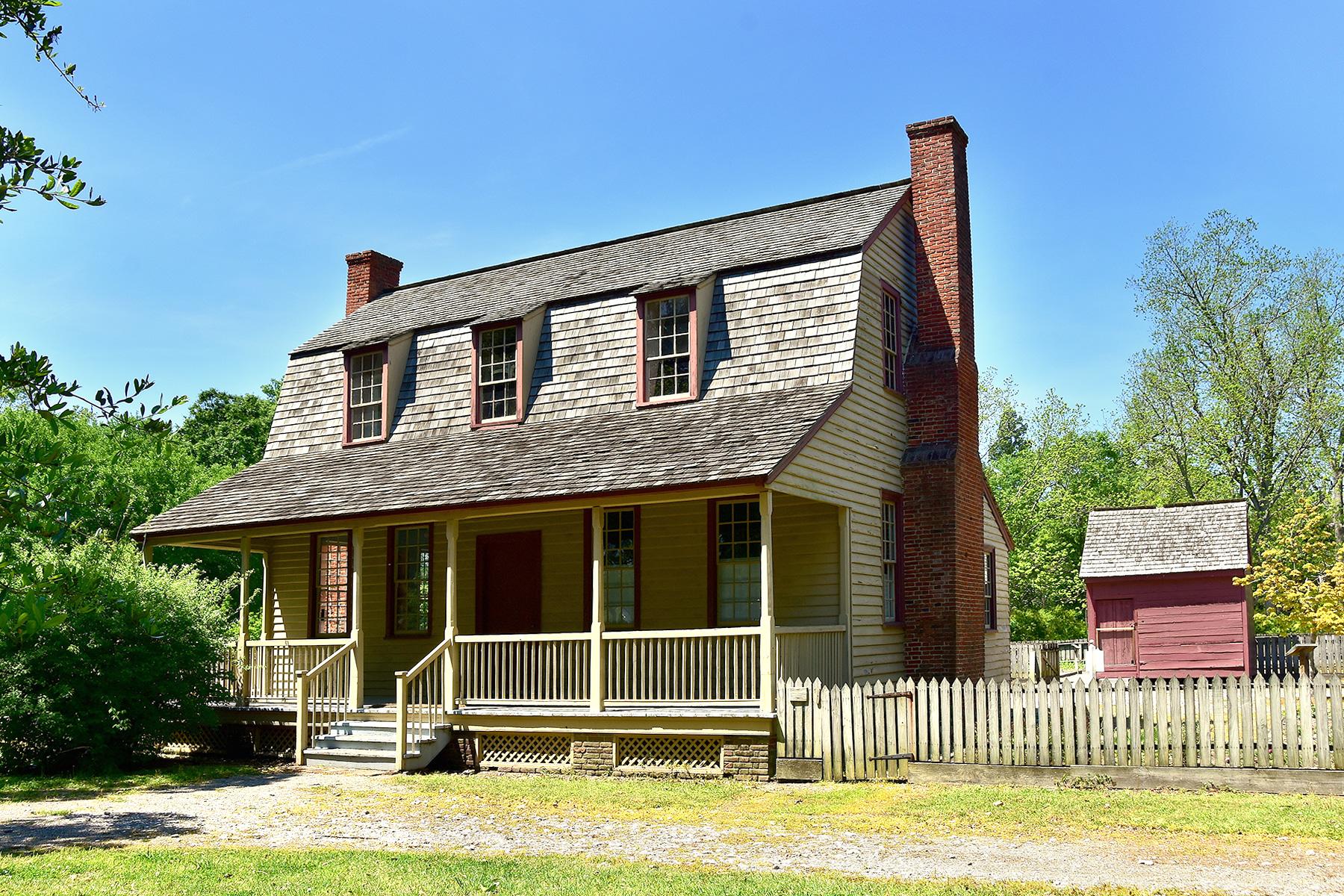 The first established town in North Carolina, Bath State Historic Site is a living museum with historic landmarks around every corner. It was here that, following the sinking of his ship, Blackbeard received a pardon from Governor Eden, who lived just across the bay. He took up residence in a local house, although it’s up for debate as to which one. His crew threw lavish parties, and Bath locals admired Blackbeard as their own celebrity. He even married his fourteenth wife here, officiated by the governor. The historic Van Der Veer House has a museum with an exhibit dedicated to the pirate, including a graphite vase rumored to belong to him. 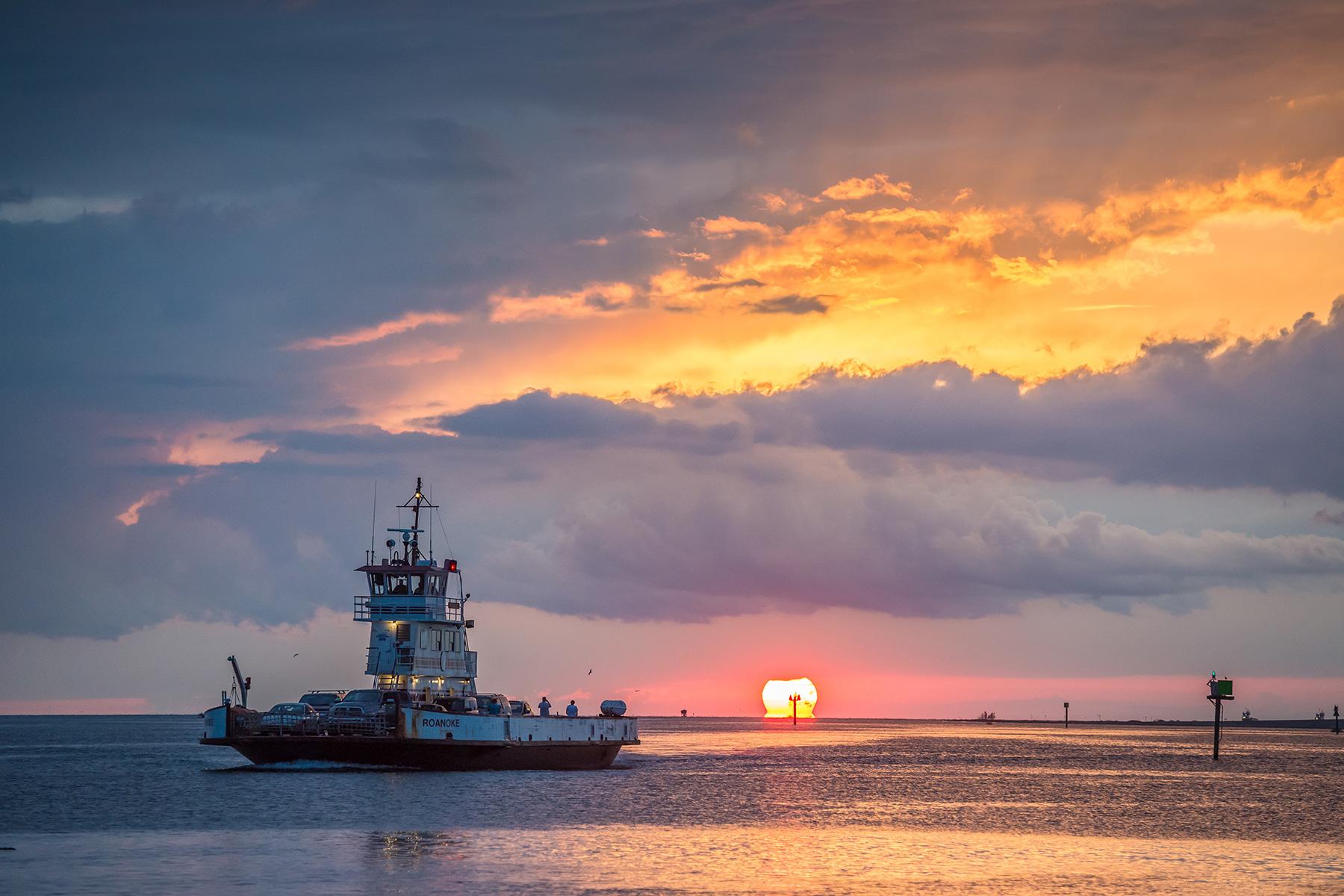 In the fall of 1718, Blackbeard prowled the Pamlico Sound, the body of water between Bath and the Outer Banks, demanding money or goods for entering ships and sharing the spoils with Governor Eden. Local farmers grew tired of this racket and recruited Alexander Spotswood, lieutenant governor of neighboring Virginia, to rid them of their pirate problem since it was clear that Eden was too cozy with Blackbeard. A Royal Navy force, led by Lieutenant Robert Maynard, killed Blackbeard on Ocracoke Island, decapitated him, and kept his head on their ship. Accessible only by ferry, this island is one of the few in the Outer Banks that is still inhabited and is one of many sites which is rumored to have his buried treasure. Visit the Teach’s Hole Museum, named for his hideout, has a Blackbeard exhibit with art, replica clothing, and artifacts from Queen Anne’s Revenge as well as pirate-themed gifts.

INSIDER TIPMake time for a beach visit during your day trip because the Ocracoke Lifeguarded Beach has been named one of the best in America. 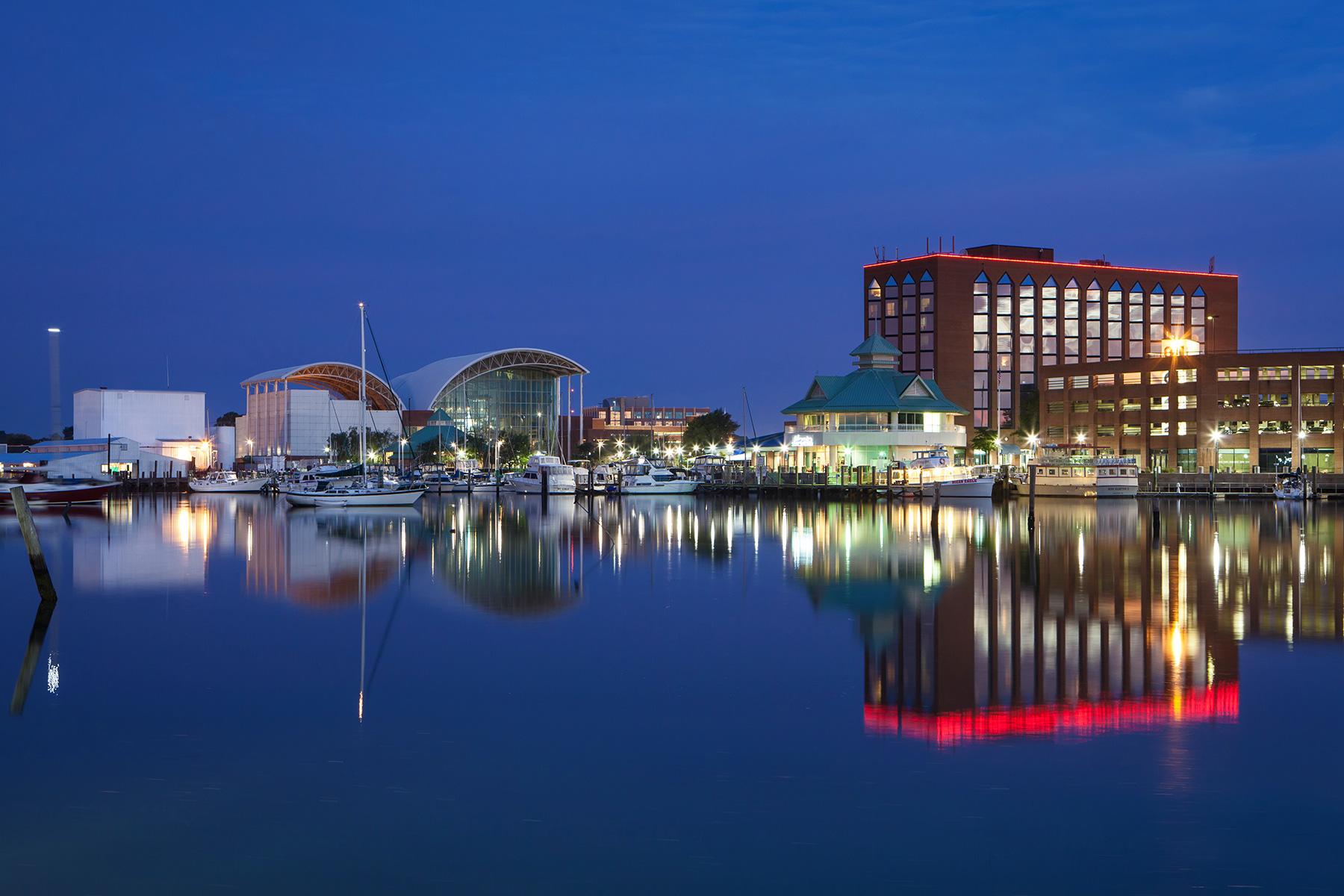 The naval officers who resided in Hampton returned after their defeat of Blackbeard with his severed head in tow. They took it to what’s now known as Blackbeard’s Point, located at the mouth of the Hampton River, where his head was kept on a stake as a warning to other pirates. The whereabouts of his skull are no longer known, rumored to have traveled from taverns to private homes, but you can see a replica at the Hampton History Museum. The town celebrates their victory over piracy every year at their Blackbeard Pirate Festival. 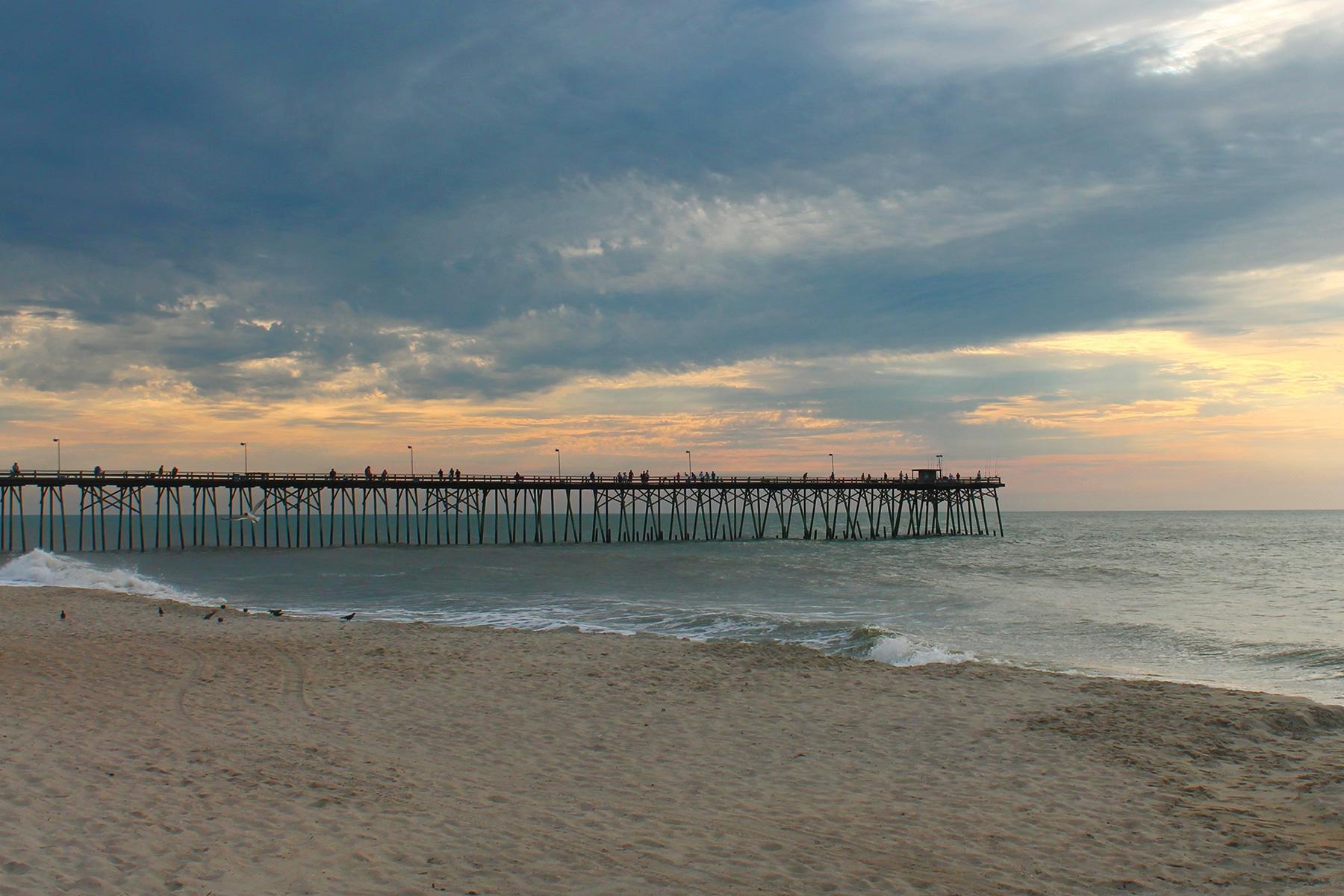 The island that spans two counties between the Outer Banks and Wilmington is another one of the many places that is rumored to be home to his buried treasure, which may or may not exist. But one thing is for sure: Blackbeard used this island to launch attacks on passing ships. Nothing belonging to the pirate has been found, but a number of artifacts from the time period were discovered over the years from dredging the Cape Fear River. Today the island is a popular beach getaway with many rental houses and condo communities for weekend or longer stays.

INSIDER TIP: Head out to one of the many piers on the island for fishing and wildlife-spotting. 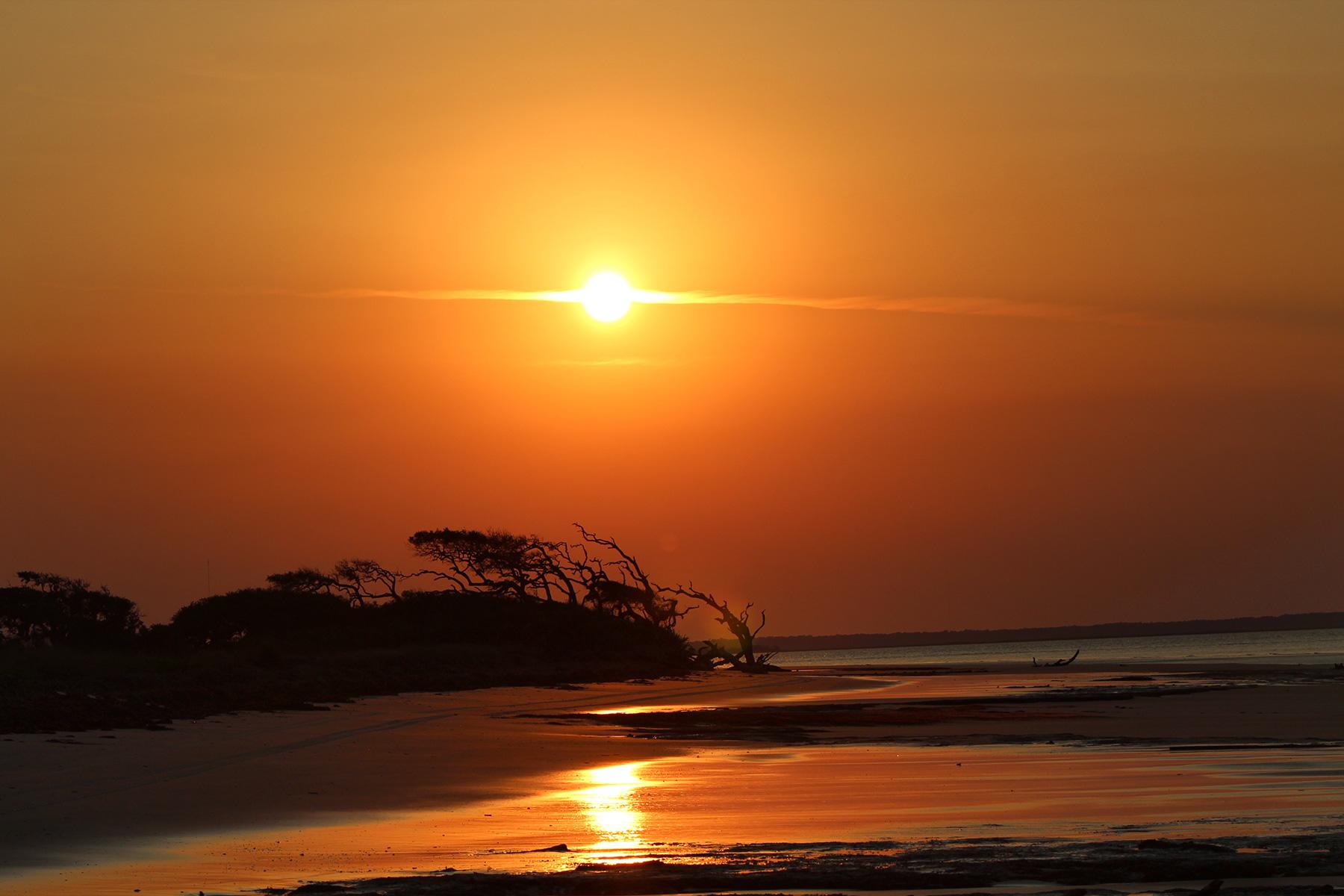 Another place rumored to hold the pirate’s buried treasure, the Blackbeard Island National Wildlife Refuge, across the creek from Sapelo Island, even bears his name. Nothing resembling it has ever been found, but the last expedition was in the 1880s. The 5,000-acre preserve was created to protect the plant and animal species of coastal Georgia, including sea turtles and migratory birds. It was used for lumber as well as a yellow fever quarantine site until it was set aside by the government in 1924. Only accessible by private charter from Shellman Bluff, the preserve is a nearly untouched paradise with driftwood and shell-strewn beaches. 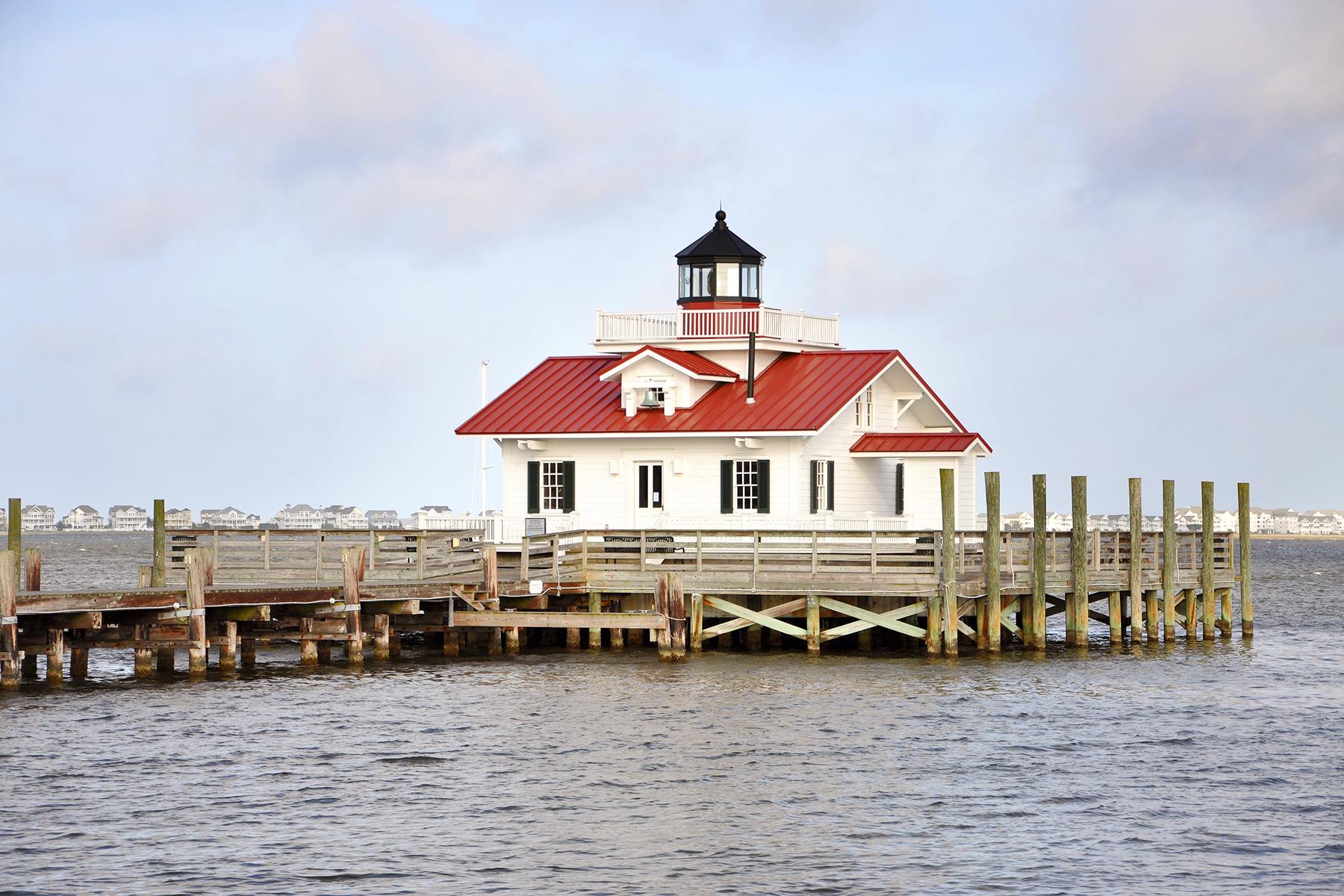 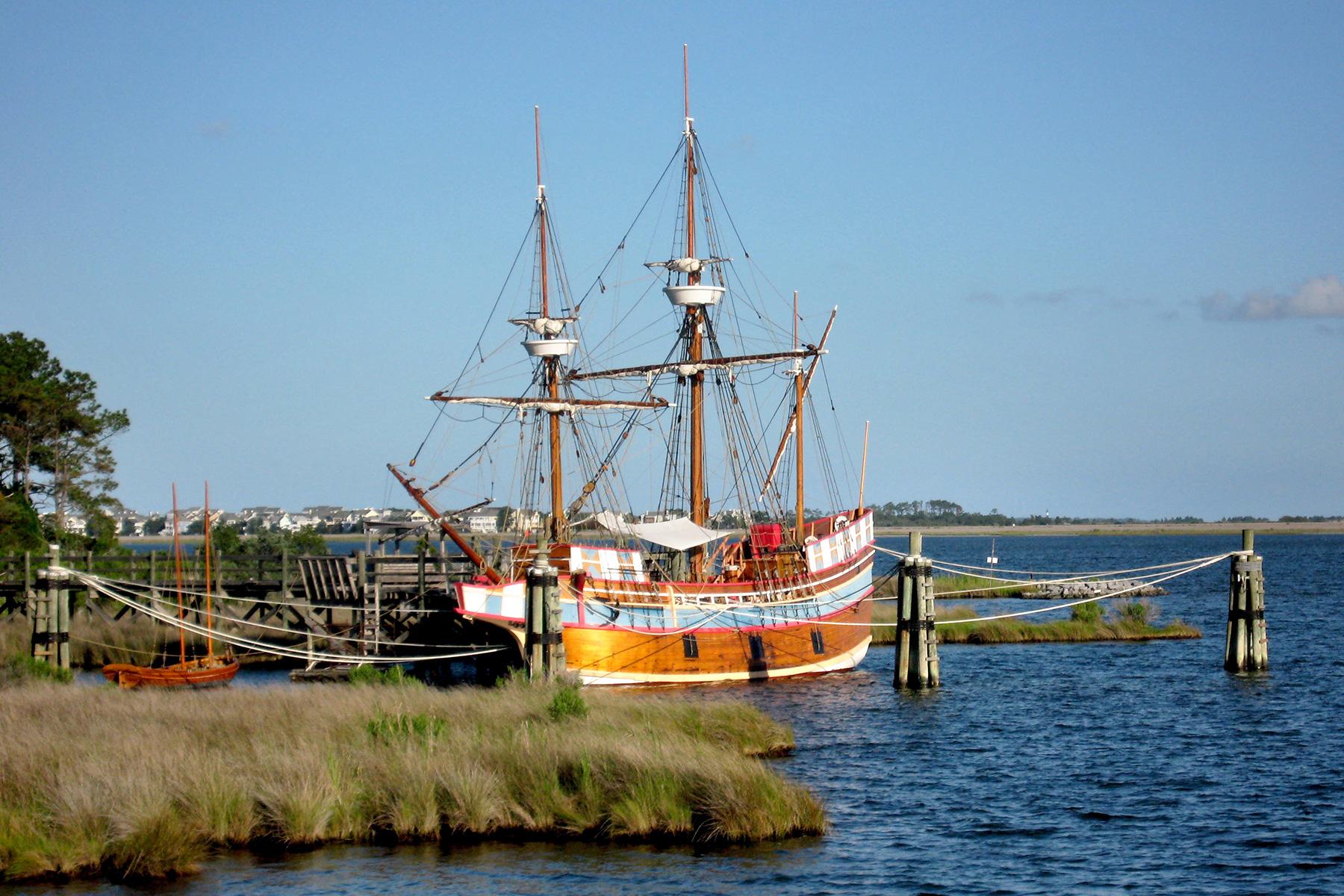 Like peanut butter and jelly, nothing goes together quite like pirates and rum. Outer Banks Distilling carries on this tradition as the first “legal” distillery in the Outer Banks. Located in historic Manteo, north of the Pamlico Sound that was famously his stomping grounds, the modern distillery offers tours of their facility and tastings of their Kill Devil Rum. The name comes from Barbados, the original home of rum, where it was nicknamed “kill-devil.” It soon became popular in the colonies, including North Carolina, often arriving in wrecked ships. The neighboring town of Kill Devil Hills is rumored to have taken its name from its connection with rum, a drink “strong enough to kill the Devil.” Many years later, two bartenders living in Kill Devil Hills started their own distillery, keeping the name for their flagship product. 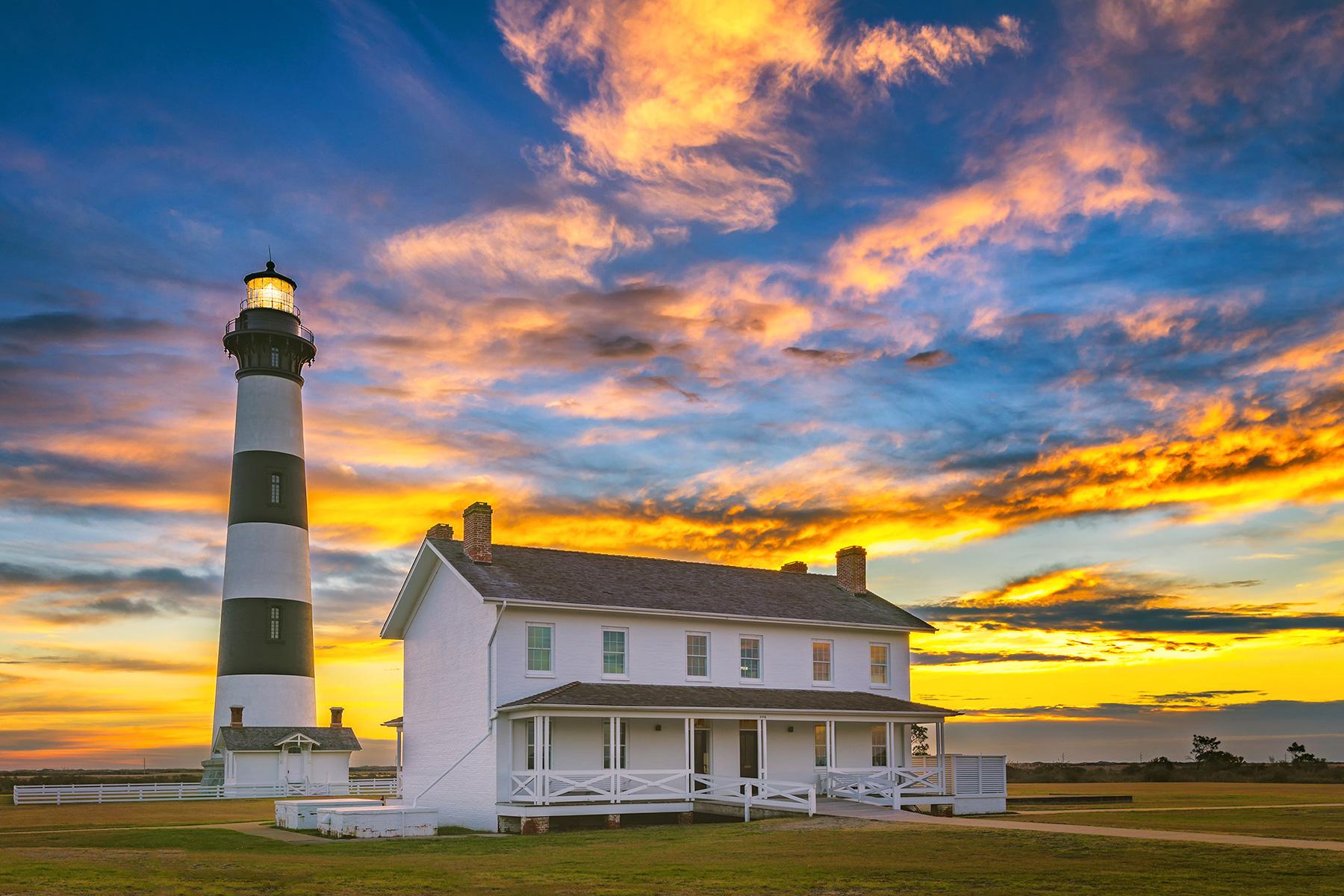 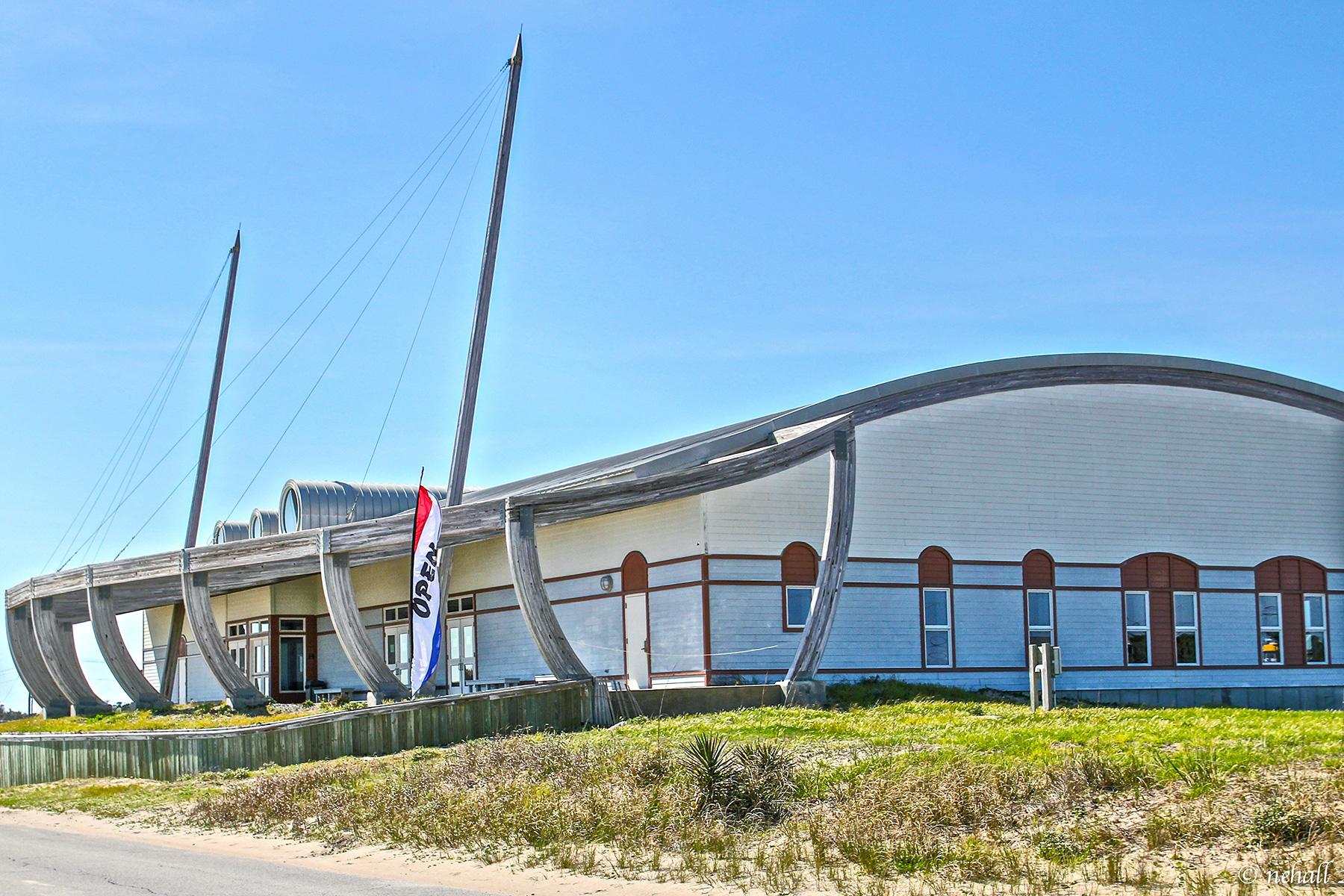 Considered to be one of America’s most beautiful barrier islands, Hatteras Island in the Outer Banks is accessible by ferry. The Graveyard of the Atlantic Museum, part of the North Carolina Maritime Museum system, is the island’s main attraction with exhibits on the history of piracy, warfare, and shipwrecks from the 17th century to 1945. It also has artifacts from the Queen Anne’s Revenge. 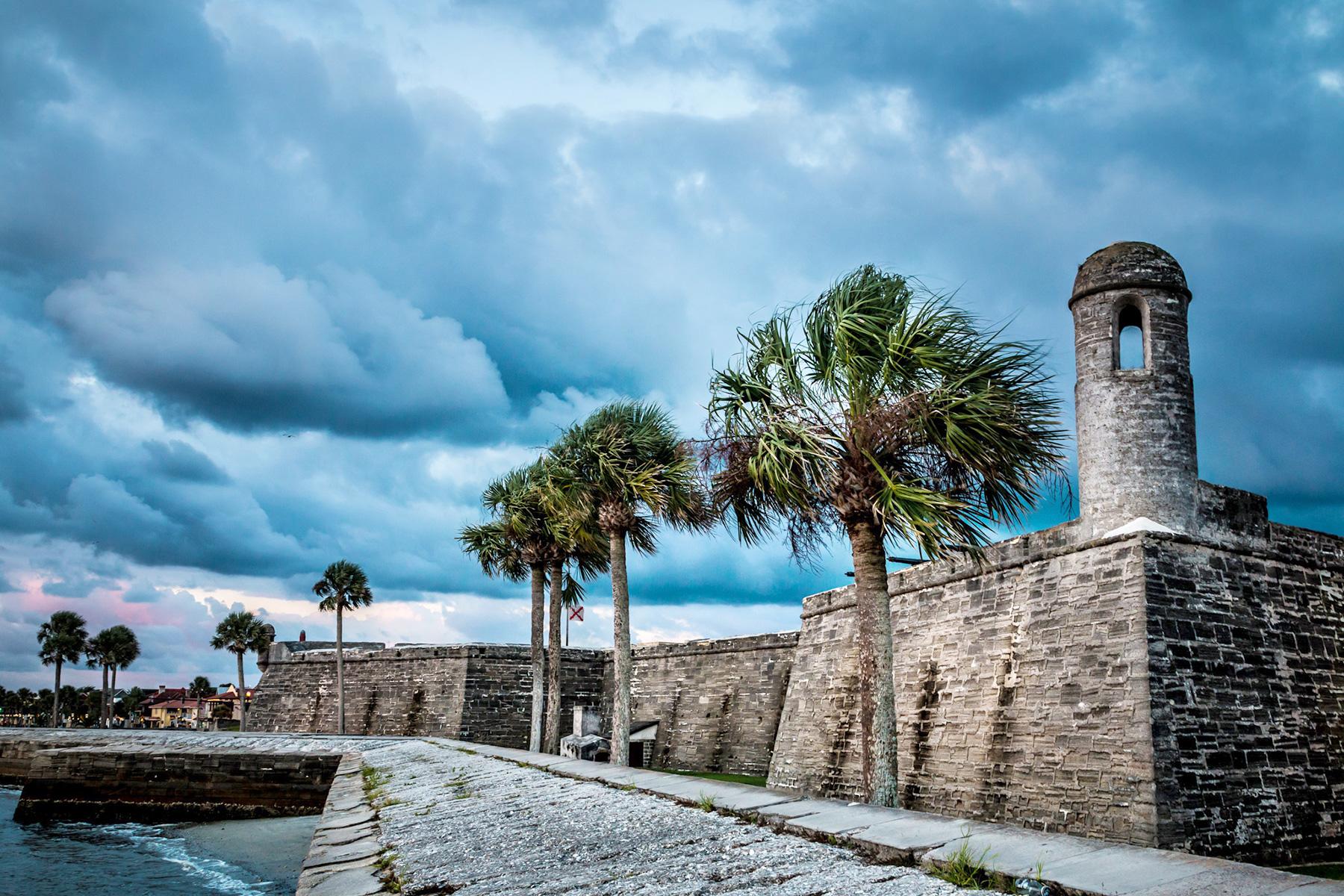 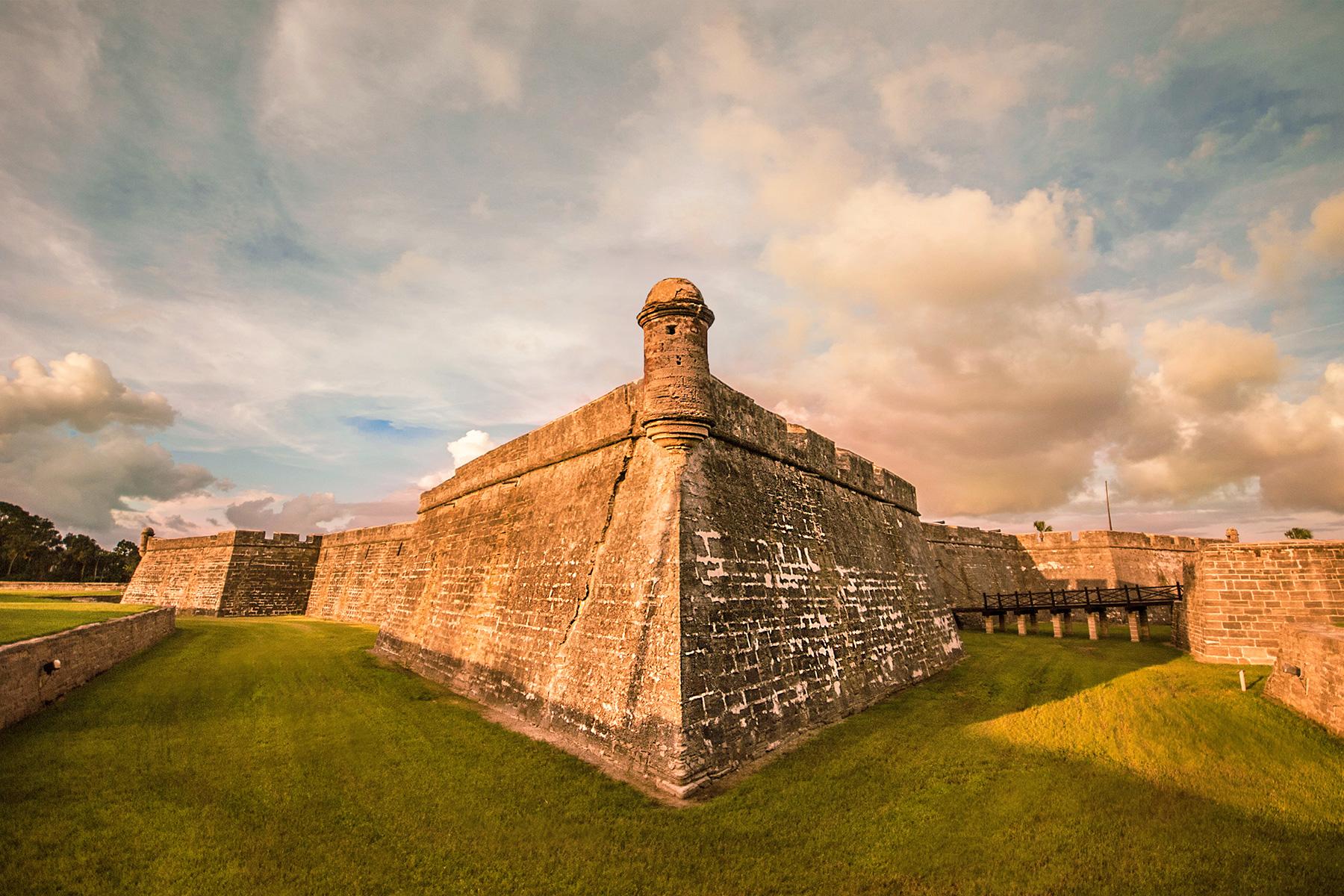 PHOTO: St. Augustine,Visitors and Convention Bureau
Previous Next
12 OF 12

Blackbeard may not have spent time in St. Augustine, but plenty of other pirates did. America’s oldest city was inhabited by the French, Spanish, and British. A fort called Castillo San Marcos was constructed, complete with cannons, to defend the city, which is still there today. The St. Augustine Pirate & Treasure Museum has exhibits on the history of piracy with artifacts like an authentic “Jolly Roger” flag, Blackbeard’s gun, and an original treasure chest as well as modern pieces like props from pirate movies. There are also pirate tours of downtown.