From subterranean chapels to churches decorated with human bones, these are some of the world’s most awe-inspiring houses of worship.

Whether you’re a believer or not, there are some churches that are, excuse the pun, truly unbelievable. Forget Notre Dame, St. Peter’s Basilica, and St. Paul’s Cathedral, these are buildings hewn from rock, filled with bones, made entirely from salt, or perched on top of a steep mountain. Each and every one a mind-blowing destination in their own right. Read on for some awesome churches. 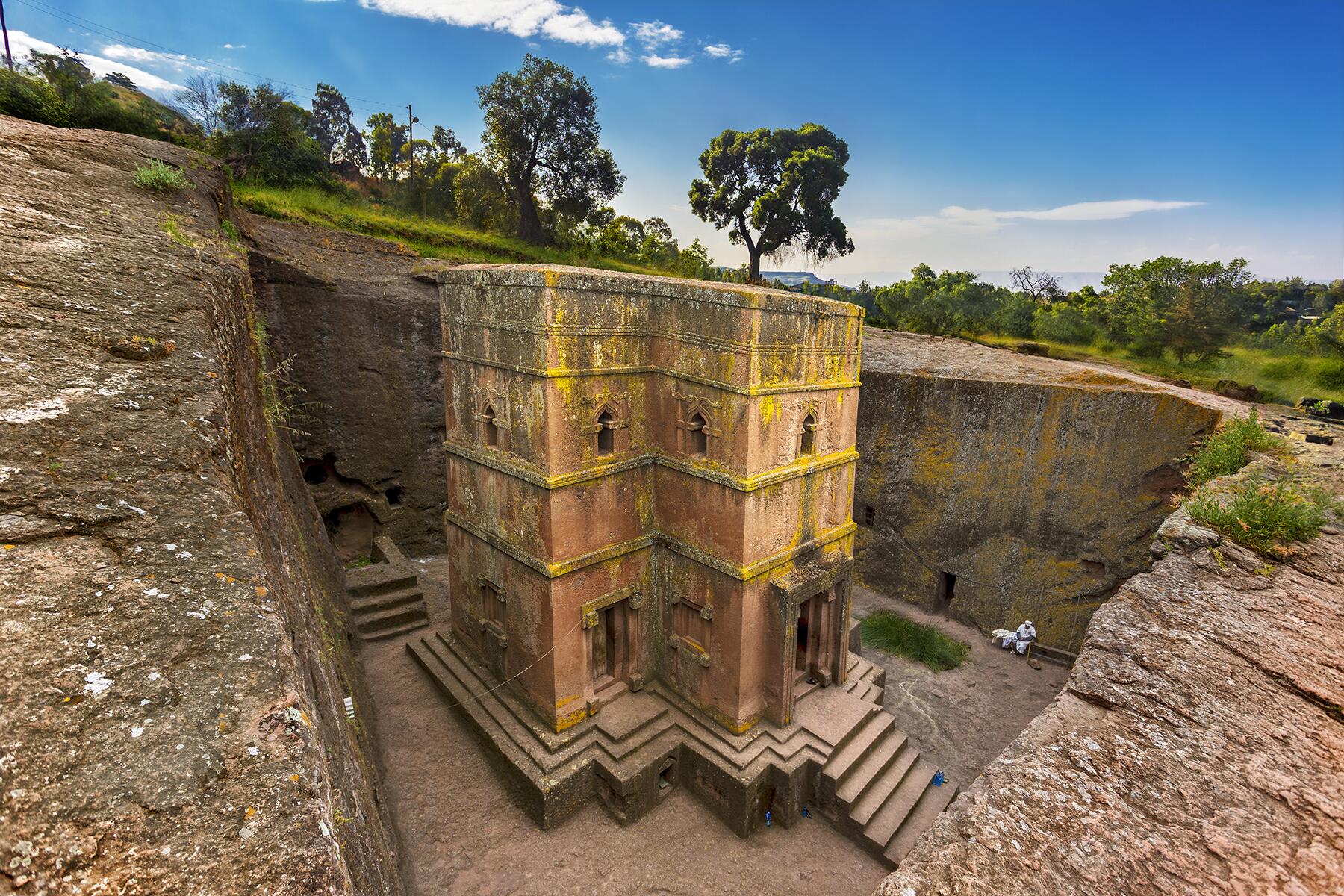 In the region of Lalibela in Ethiopia you’ll find not just one church hewn out of rock sitting in a hollow, but 11. Listed as UNESCO World Heritage sites, these churches have been carved out of rock, inside and out, in one piece, an amazing 900 years ago. The region, not surprisingly, is a center for pilgrimage, with the faithful often walking for days to get to the remote churches. Each church is different in shape and style, one, probably the most famous, is in the shape of a cross, others look more like conventional western buildings, yet another has ridges that makes it appear striped. Many are connected through underground tunnels and have a system of drainage canals to stop the hollows in which they all stand from filling up with rainwater. Ethiopia is making inroads into developing the area for tourism, which will pose a threat to these ancient structures, but you can’t blame people for wanting to see them. 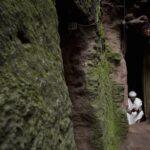 RELATED STORY
Ethiopia’s Most Fascinating Church Is in a Cave 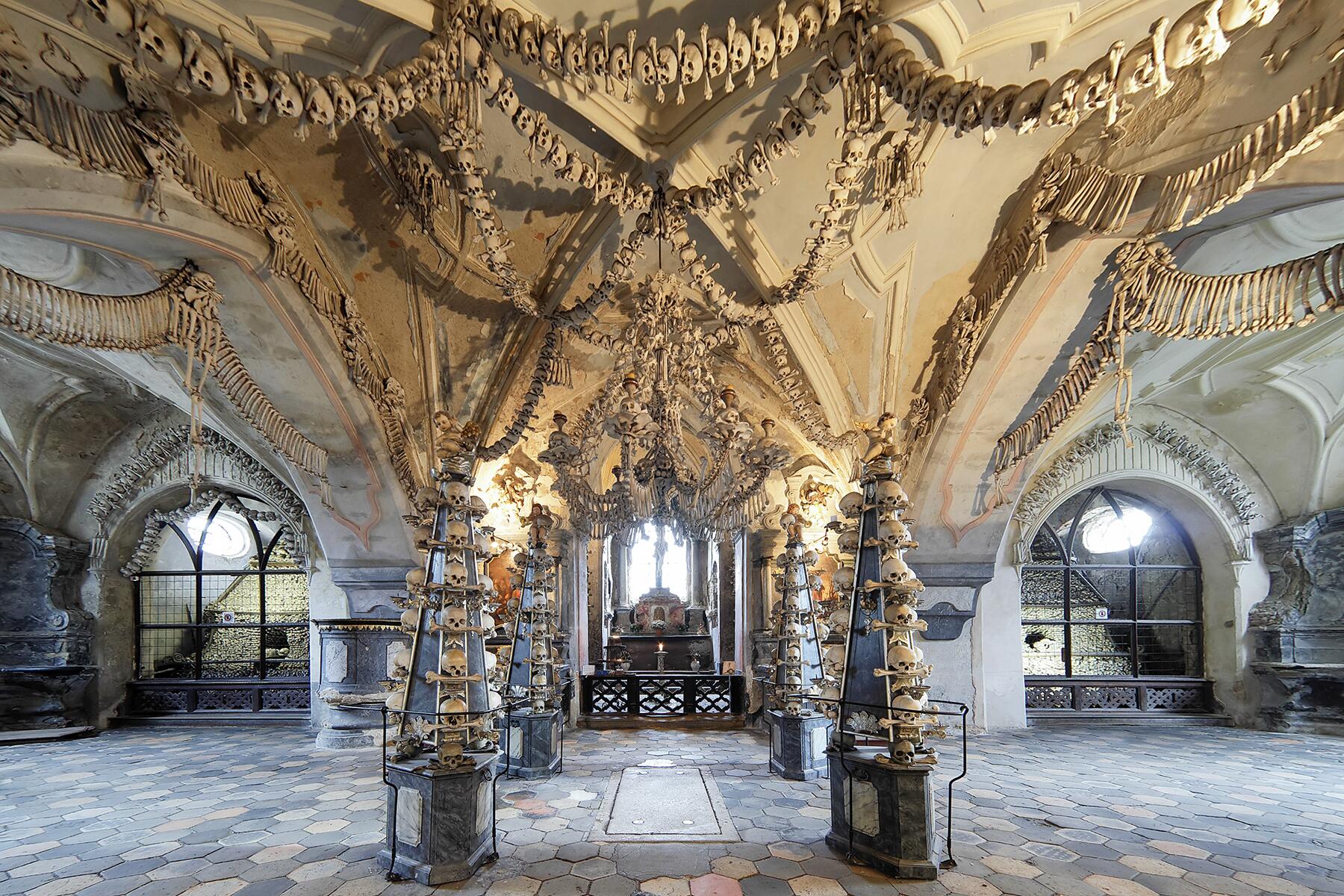 Just when you’ve marveled at chandeliers made from salt, now you can admire chandeliers made from bones. In the Sedlec Ossuary, some 40,000 human bones have been used to make ornaments, chandeliers, a coat of arms, and various other items you had never imagined could be made from bones. It all started in the 1200s when the abbot of a small monastery in the insignificant town of Sedlec just outside Prague went to Jerusalem and brought back with him some holy soil. Before you knew it, everybody, quite literally, wanted to be buried in the small cemetery, and they started to run out of space. Until, that is, an enterprising soul in the 1800s set about to tidy up and sort out all the bones piling up. The result is stunning, if a little creepy. 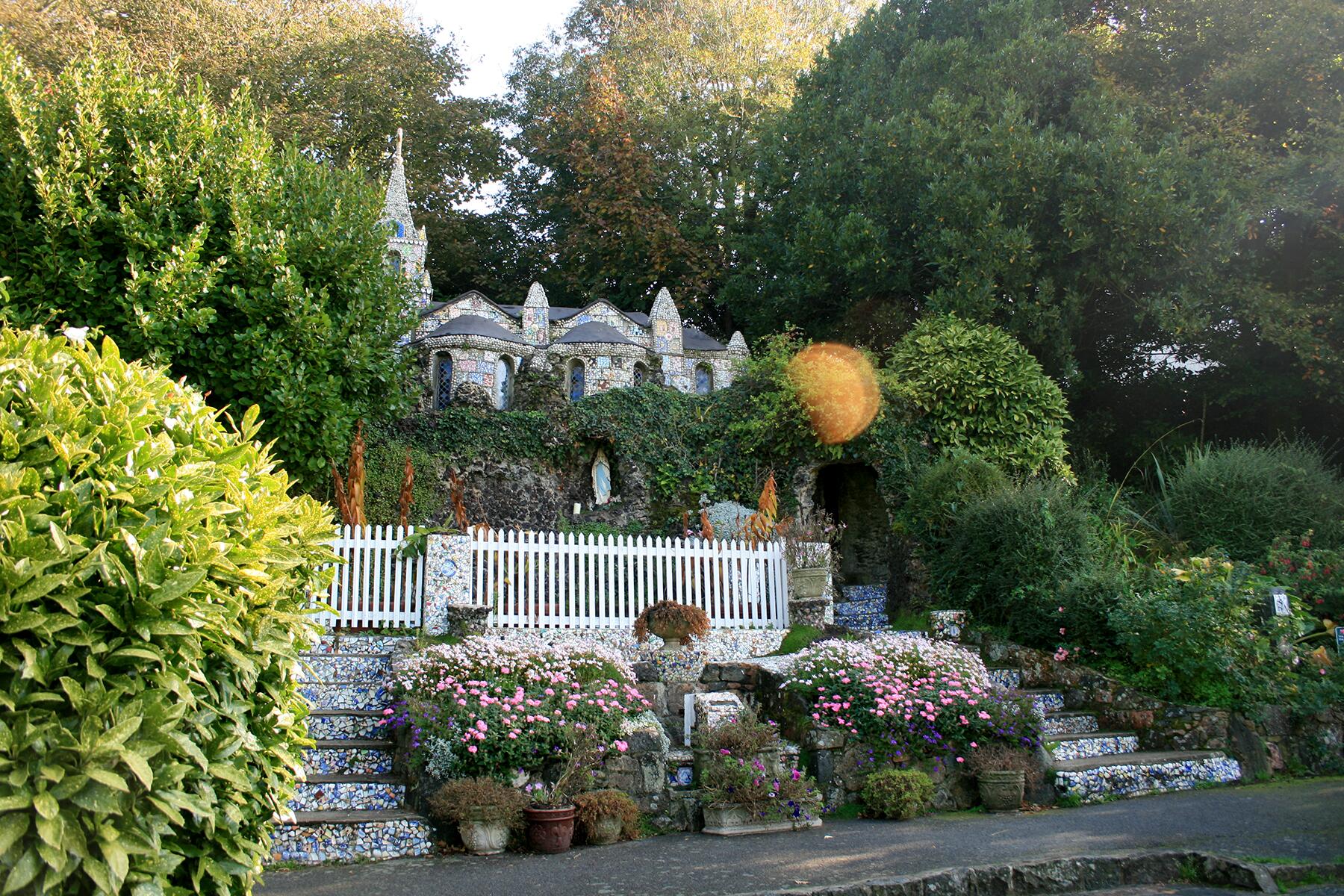 The Little Chapel at first sounds like some tacky tourist trap and looks like a toy when you approach. But, getting closer, it is truly amazing. A tiny chapel, but large enough to enter and with a proper little chapel in the basement, is entirely covered in shards of broken pottery and porcelain. You can spend hours looking at the shards. There are pictures of cats, emblems, porcelain services you’ll recognize, souvenir plates from around the world, and it all comes together in a quite mesmerizing building. The love child—of sorts—of monk Brother Deodat, the chapel is a replica of the Basilica in Lourdes. Just smaller. And covered in broken pottery. The current version is the third incarnation, as the first two versions were either not nice enough, or too tiny. The Little Chapel is free to view, and carefully looked after and continuously restored with pieces of broken pottery donated from around the globe. 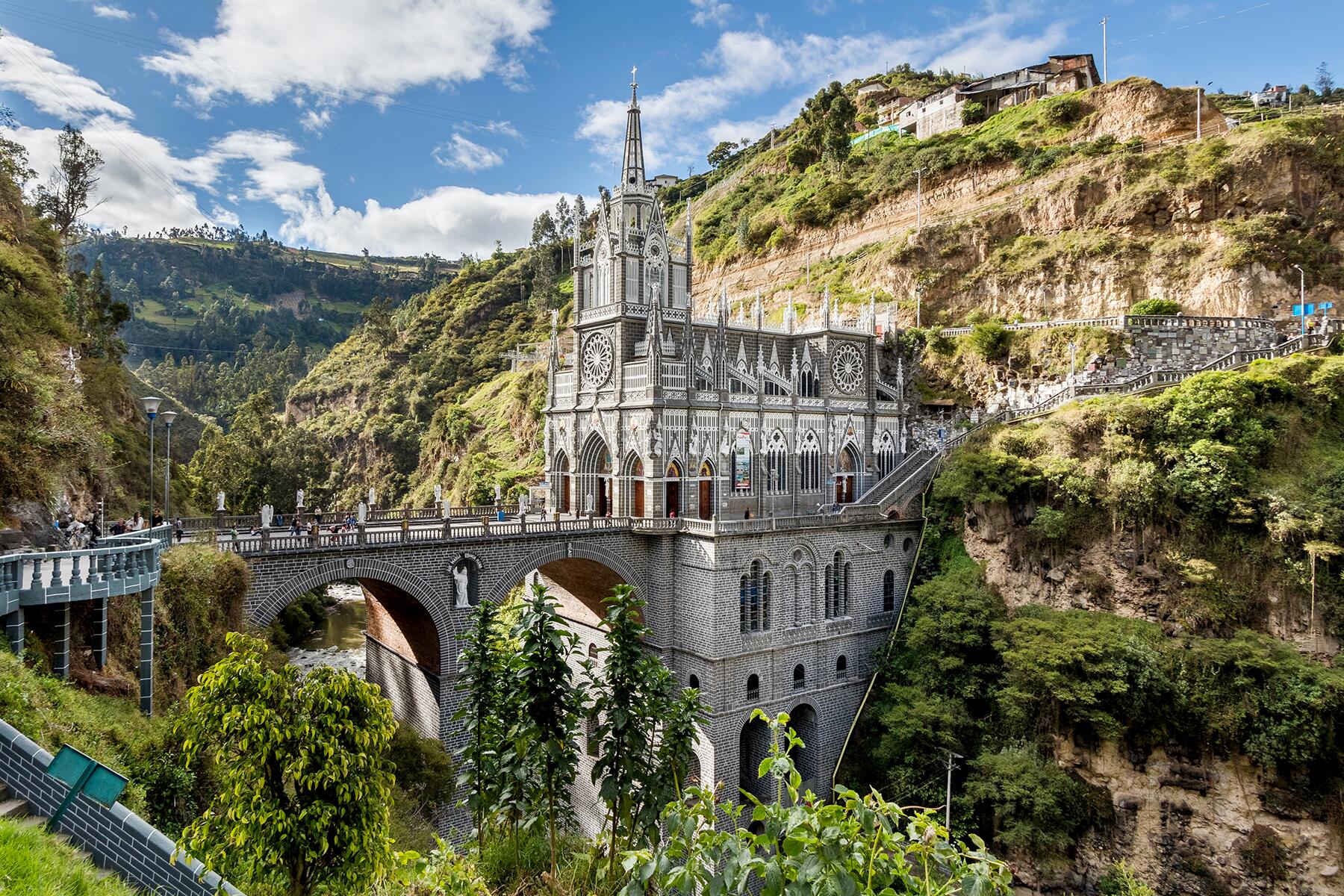 When is a bridge a church, and a church a bridge? When both span a canyon some 160 feet above it. Las Lajas Sanctuary in Colombia is a sight to behold. Set in rural southwest Colombia, the mountainous countryside is gauged by a large canyon with cascading waterfalls. Then a bridge comes into view, only the bridge leads straight to a church set in the mountainside. Legend has it that a mother and her deaf daughter sought shelter from a storm by the rocky canyon, and the daughter spotted the Virgin Mary and spoke for the first time. A shrine was built around the apparition and gradually evolved into the current and rather stunning church. 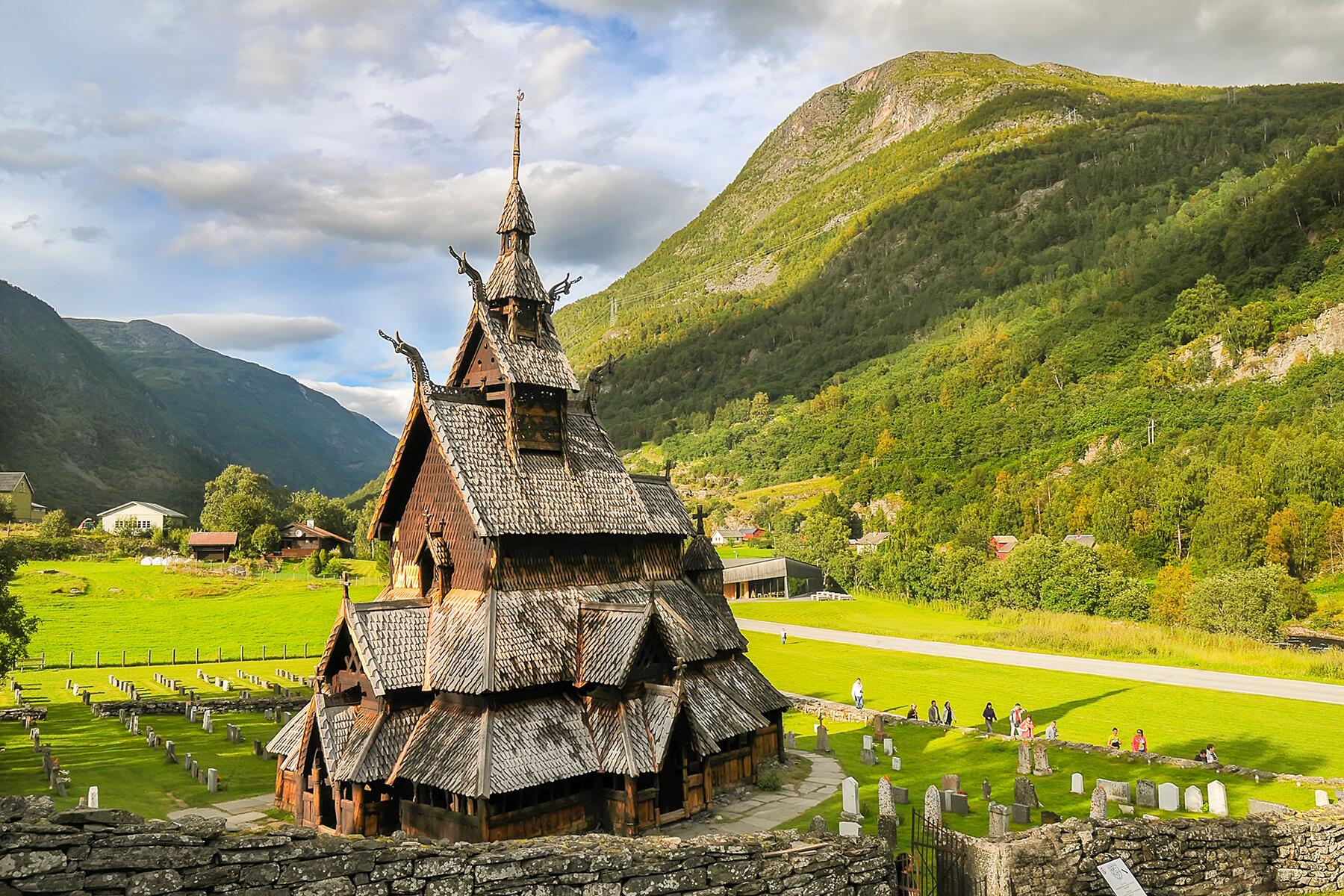 Probably Norway’s best example of a stave church (a style of wooden church that was popular in medieval Europe), the Borgund Stave Church, which dates back to 1180, is worth a detour. Roughly located between Oslo and Bergen, in rural, central Norway, this is still reportedly Norway’s most-visited church. With its tiered roof and dragon carvings adorning the gables, it’s obvious that the expertise for building these kinds of churches originated in Norse boat building, as the dragons would not look amiss on a traditional longboat. And just when you think that wooden churches could never be pretty or adorned enough to compare with stone-built churches, think again. No, you won’t find stained-glass windows, in fact, you won’t find any windows, but you will see old Rune carvings and the inside of the church which used to be painted with colorful designs.

If this one is too far out of the way for your visit to Norway, have a look at another example in the Norwegian Museum for Cultural History in Oslo, an outdoor museum dotted with amazing buildings. 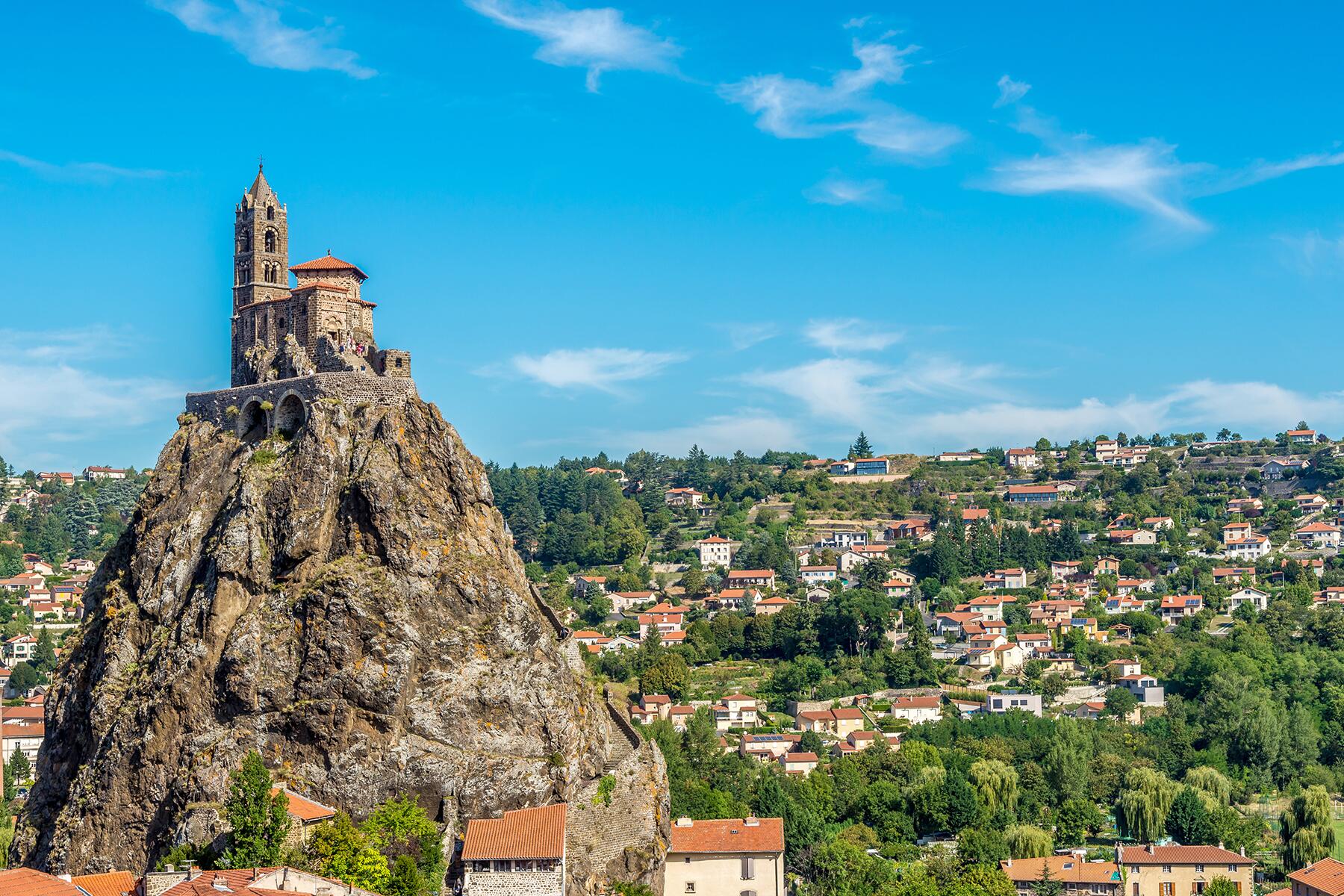 The little Chapelle Saint-Michel-d’Aiguilhe defies all building laws, surely. Perched on top of a very steep volcano chimney in the volcanic region of Auvergne in central France, building this must have been something of a challenge. Nearly 300 feet up, reached by 268 steps, the chapel dates back to 962, and the bishop Godescalc, who ordered it built. The bishop was the first French pilgrim along the Camino de Santiago, back in 960, and the chapel itself is a stopping off point along the way. The volcanic plug on which the chapel sits is big enough for the chapel and a walkway around the outside of it, allowing for fabulous views all around this amazing landscape of volcanic mountains and small villages. 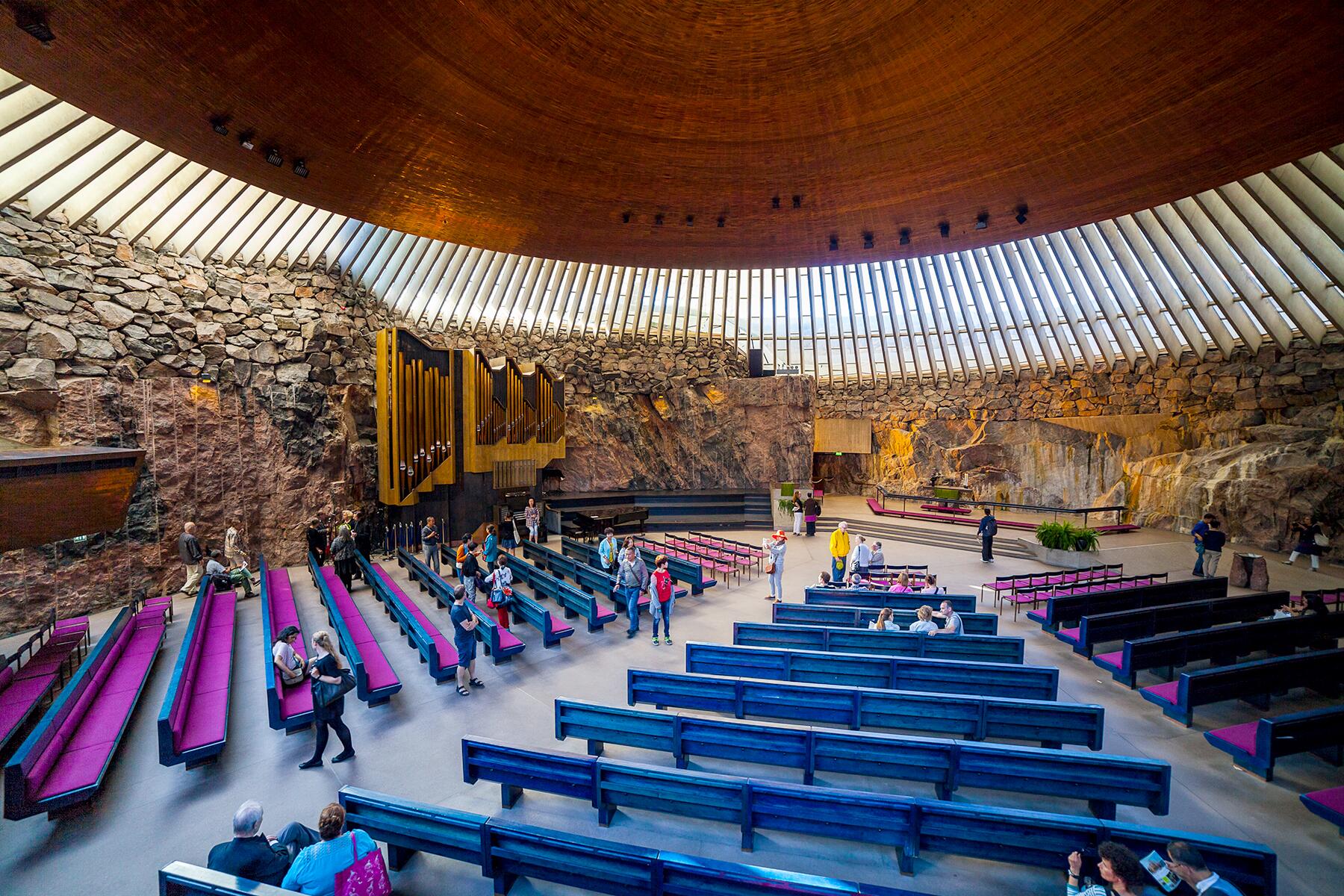 Opened in central Helsinki in 1969, Temppeliaukio is hewn from a lump of rock. A series of small indoor waterfalls splash throughout–a drainage slot runs along the ruggedly uneven walls to carry the water outside. The effect is a contemporary yet ancient house of prayer–the rock altarpiece, for instance, dates back to the ice age, but the domed copper roof is ultra-modern, surrounded by open slats that allow the light to fall and enhance the entire space. It’s especially beautiful around midday but you should also try and catch a service or a concert here, as the acoustics are amazing. 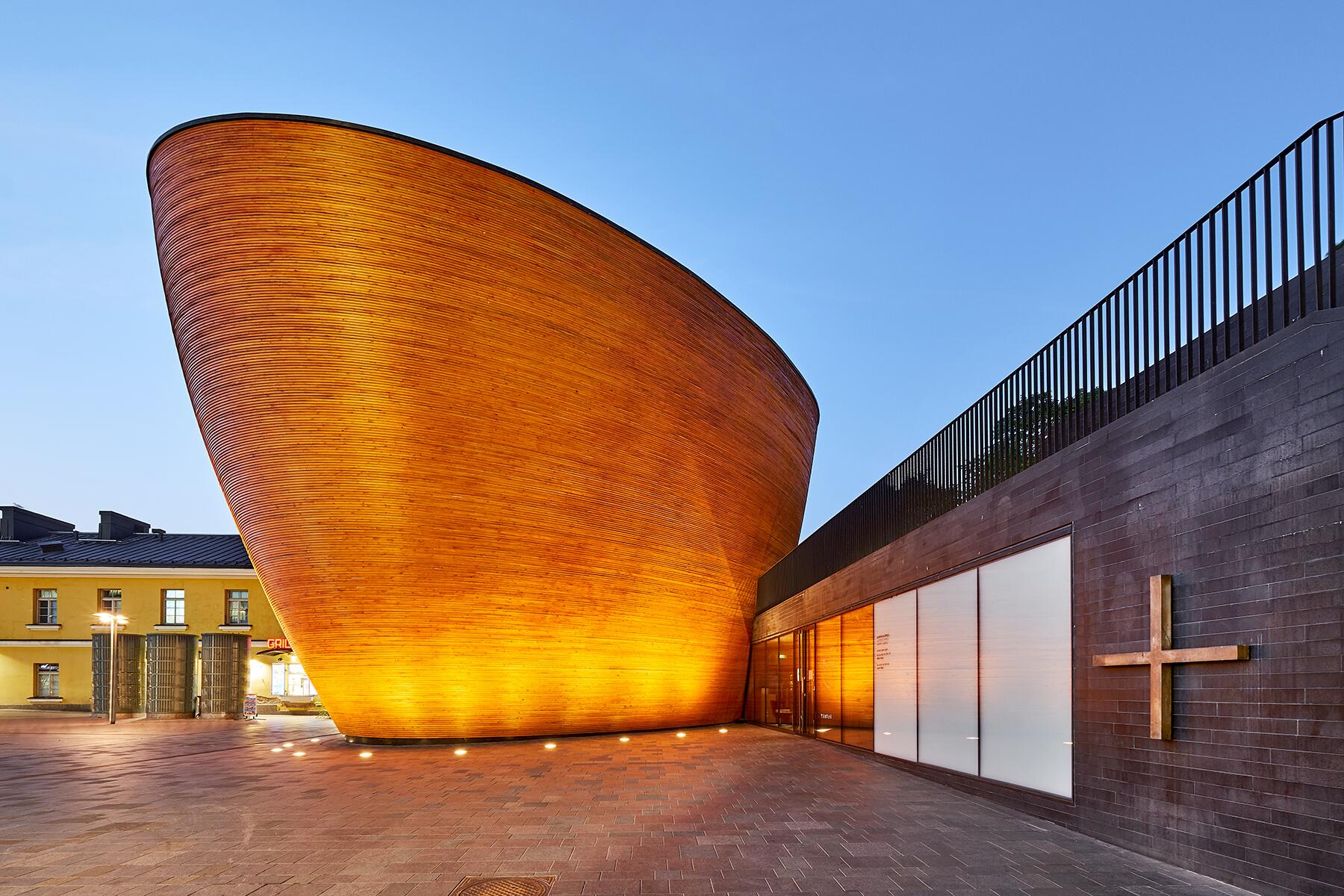 While you’re in Helsinki, don’t miss the Kamppi Chapel. This unusually shaped structure, which resembles an upturned cone made from wood, has won awards for its innovative modern design and is a haven of tranquillity. Sitting right in the middle of bustling Helsinki, between the train station and the busiest shopping area, it was designed not for regular services, but for people to step inside and take a minute to breathe, reflect, to enjoy the calm that suddenly envelops you once you step inside. All religions are welcome, and you can sit on the comfy felt pebbles to simply relax a little. 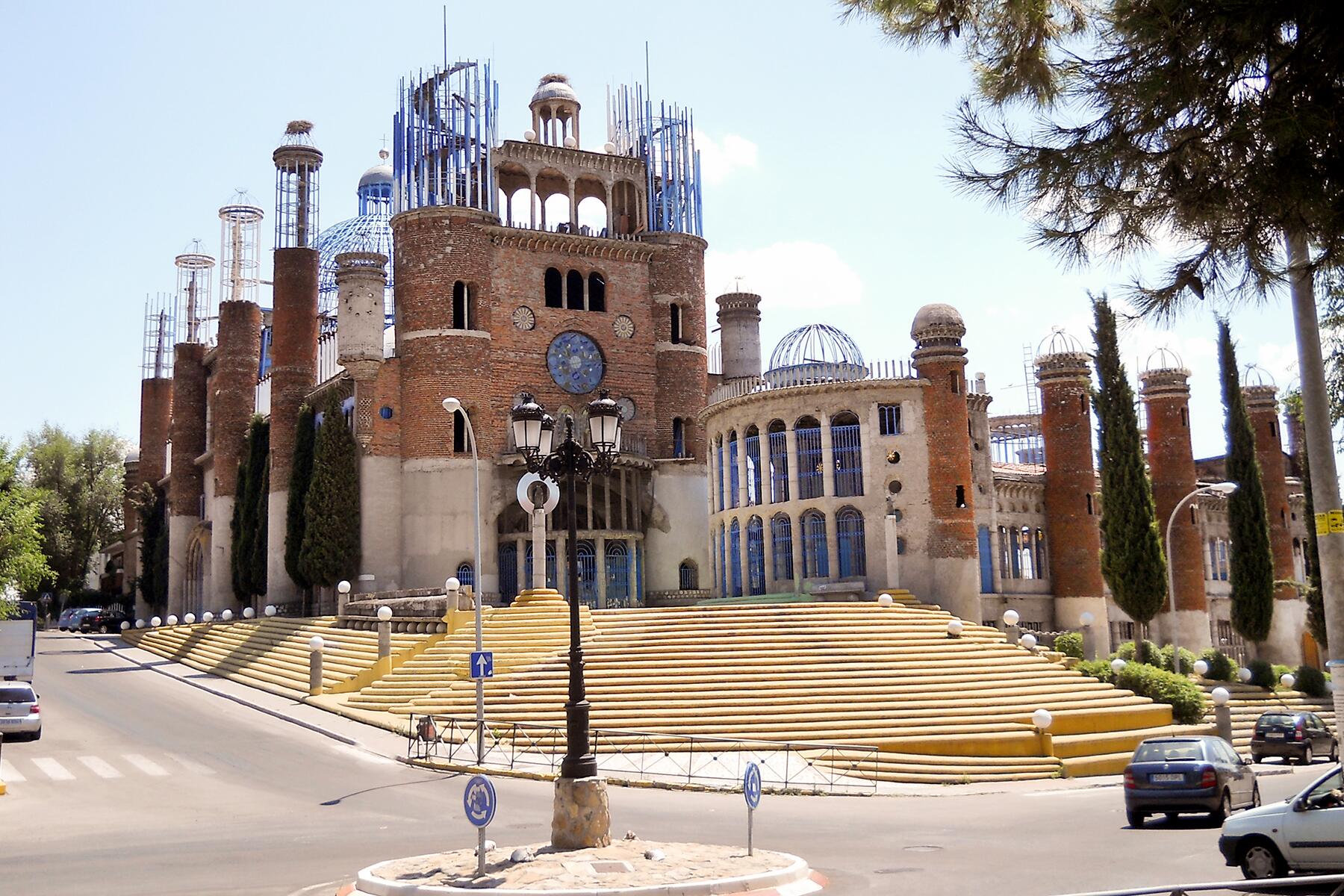 Building a chapel, a church, or a cathedral has always taken years, decades, even centuries in some cases. Now imagine doing it all on your own. Enter Don Justo Gallego, a man in his 90s living on the outskirts of Spain’s capital of Madrid. After being kicked out of a monastery where he wanted to become a priest after he contracted tuberculosis, he decided to build his own place of worship and started building a cathedral in the 1960s. And we are not talking small Little Chapel like in Guernsey, or a miniature church, no, this one is a normal-sized, proper, huge cathedral. And it is nearly finished. Alas, with no backing from the Catholic Church, and no appropriate architectural planning involved, nobody is officially allowed to conduct a service inside, as the building cannot be signed off as safe. 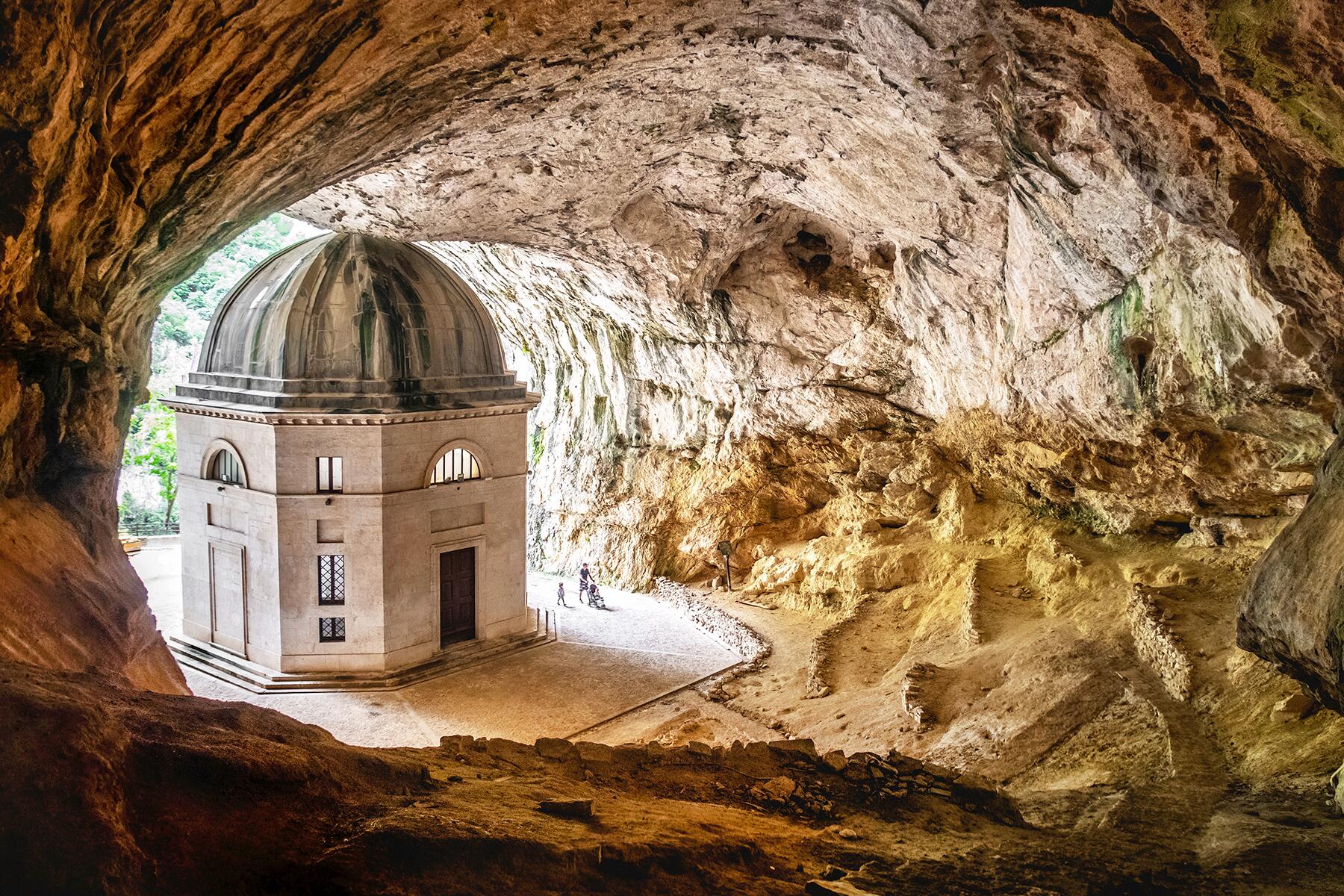 Not an imposing cathedral, but a small octagonal temple, the Temple of Valadier is locally known as the Refuge of Sinners. The small temple was built partially inside one cave of the Frasassi Caves, in a mountain range in north-eastern Italy, just south of the small state of San Marino. The cave had served for centuries as a refuge for the locals from marauding tribes, but it wasn’t until 1828 that the official temple was commissioned by then Pope Leo XII, who came from Genga, and became an official point of pilgrimage.