Transportation Peter Yeung Would You Take the Longest Rail Journey in the U.S.?
Delta

In honor of their new partnership with LSTN headphones, Delta hosted their first silent disco at 30,000 feet DJ’ed by Questlove.

Things started out strange–the invitations sent by Delta requesting the presence of press, social media influencers, marketers, and other media to an in-flight “Silent Disco” were all different (in some cases, there was no invitation at all—just a text message notifying the recipient that they would be put on “the list”)–and only got weirder from there. Details were sparse. The hosts were tight-lipped. The whole event had an air of mystery, but like any writer (or Instagram-obsessed millennial), one of my favorite mottos is “Do it for the story.”

We all wondered: “Will I get SkyMiles for this?”

Guests were told to meet at South Street Seaport in Lower Manhattan, where we were greeted by hands-down the most glamorous and friendly flight attendants I have ever seen in my life. We boarded two luxurious coach buses, where we were whisked off to JFK with fancy lunch boxes and cans of rosé. There were rumors that the plane was not leaving the ground or that we would land in a field in Connecticut. There were rumors that we were going to a private terminal where we’d board a plane with no seats. This sounded implausible to me. One person got a notification on their Delta app: We were on a 9 pm flight to Hartford, Connecticut. It was unclear if we were actually landing there, but we would return to JFK at 1 am. We all wondered: “Will I get SkyMiles for this?”

Transportation Peter Yeung Would You Take the Longest Rail Journey in the U.S.?
Continue Reading Article After Our Video

We arrived at the airport, where TSA had opened a special security screening for us. We still had to take off our shoes and put everything through x-ray machines, but the line moved quickly without luggage. It felt incredibly chic to be carrying just a small purse at the airport. Traveling light is the height of luxury because it means you have enough money to buy whatever you need when you arrive at your destination (in my case, a $2.75 subway ride home from the airport). I also felt quite fashionable because I was wearing an outfit that I would never actually fly in (I fly strictly in clothes that don’t look like pajamas but are, in fact, pajamas). I was only wearing jeans and a t-shirt, but they were bell bottom jeans (duh, I was going to a disco). There were others who were obviously dressed like they had come from work, but a select few were dressed to the nines in colorful bodysuits, shiny dresses, and sheer crop tops.

We got to the gate (B32 in Terminal 4) where the airline was playing music, giving out snacks and drinks, and taking Boomerangs and Instagrams of partiers against a Delta backdrop. Regular people who were at the airport to go on an actual flight did not look amused.

The pilot came over the loudspeaker: “You guys need to get LIT!”

We boarded the plane (a 737-900) and found our assigned seats, where we had a set of headphones and a radio receiver waiting for us. Miraculously, I was seated in the first row. Was it because I’m a Gold Medallion member? We’ll never know. I’m 90 percent sure the people across the aisle from me were Instagram/Snapchat/YouTube celebrities.

After taxi and take-off (with music, free Wi-Fi, and basically no rules), the fun began. The pilot came over the loudspeaker: “You guys need to get LIT!” The lights came on, a disco ball came out, and flight attendants passed through the aisles handing out mini bottles of prosecco. We were now free to rave about the cabin. 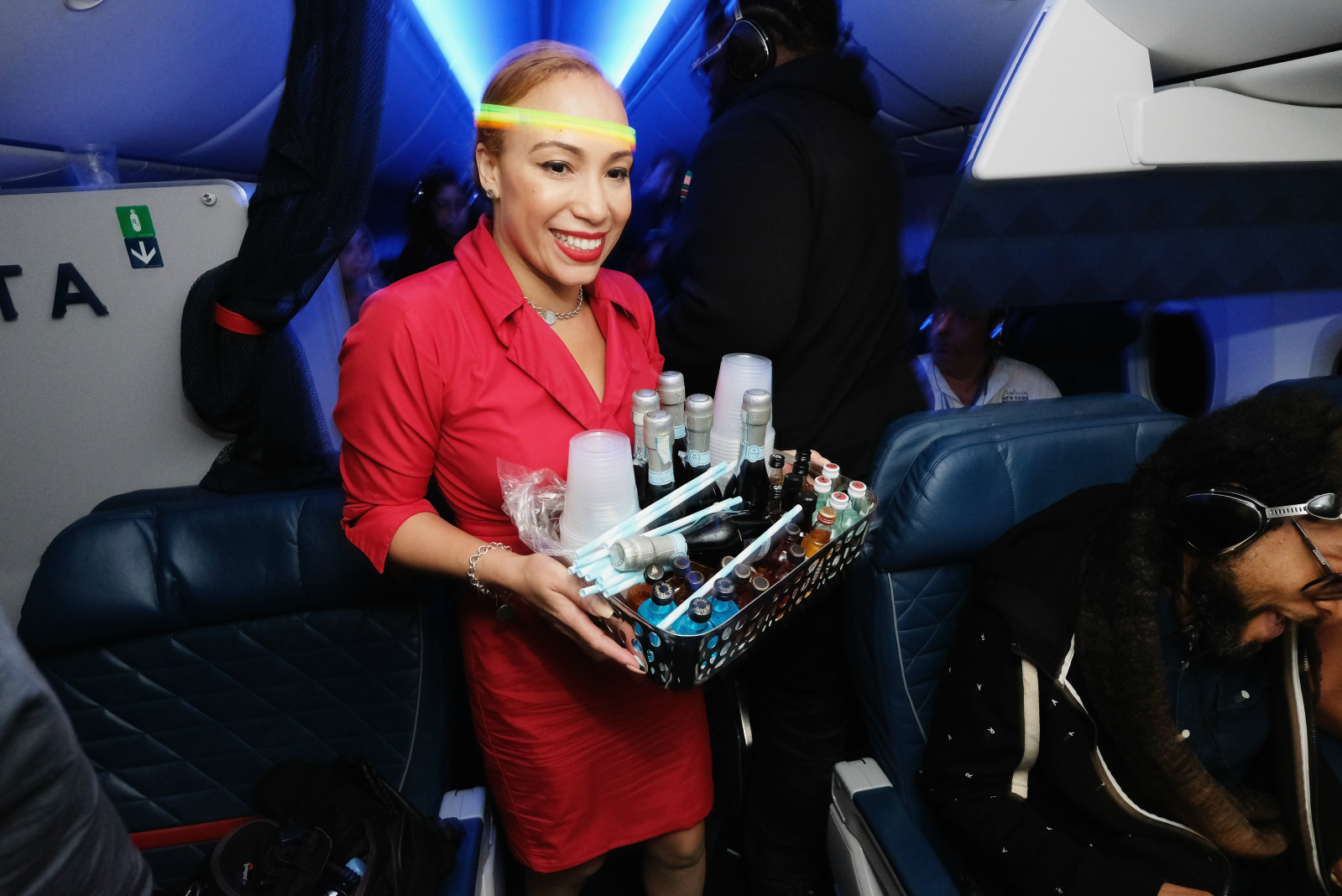 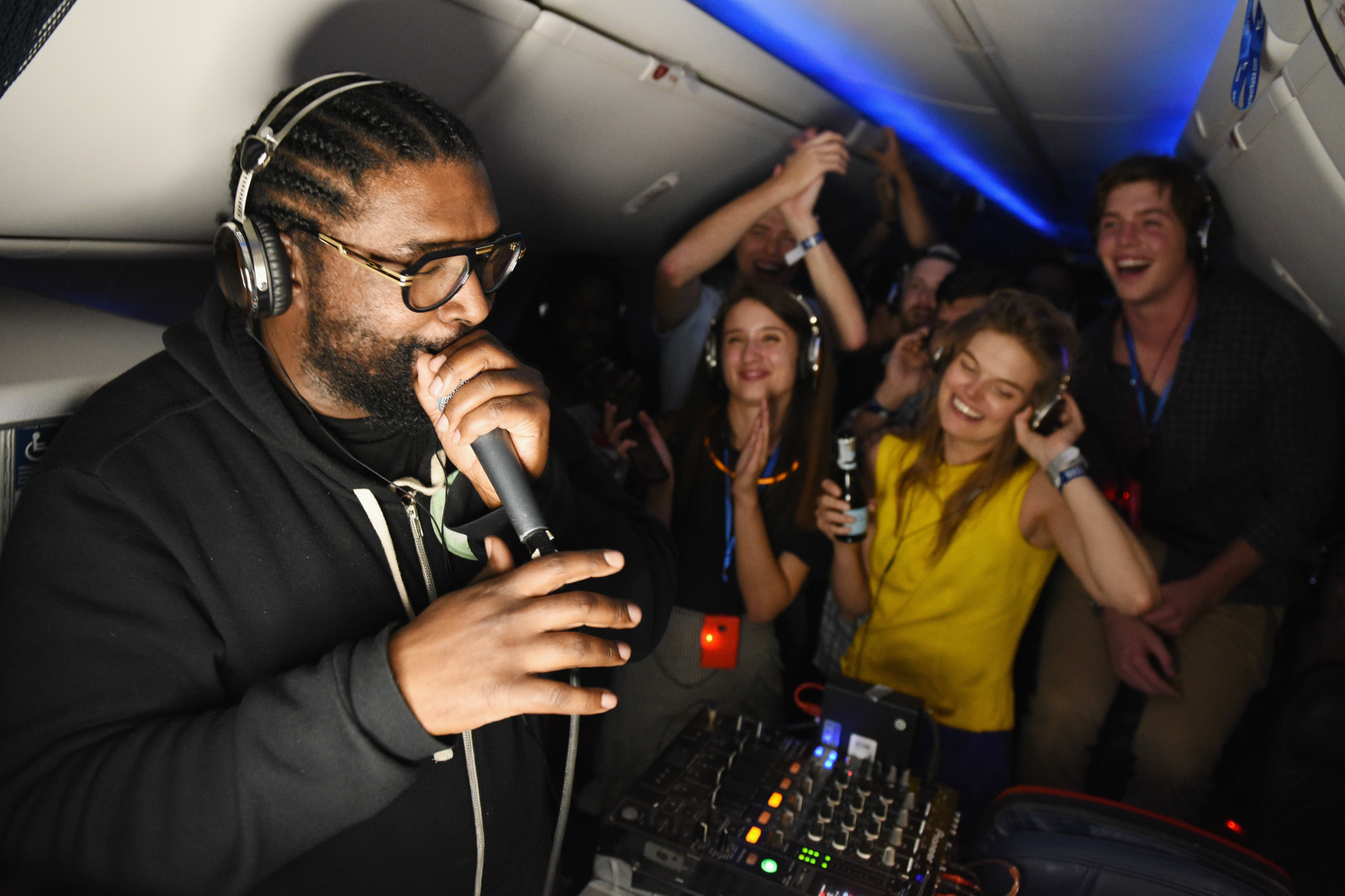 DJ Questlove was introduced, along with the emcee for the night, Yameen Allworld. Questlove fashioned a DJ booth from an airplane service cart, positioning it sideways in the aisle and DJing from the bulkhead. The party started when everyone put on their headphones and the music started playing. Everyone was out of their seats, laughing, dancing, and drinking tiny bottles of prosecco that had a bit of an issue with the air pressure. There were a few explosions.

Suddenly, glow sticks appeared out of nowhere. This was turning into a real rave. After one warning from the pilot (“We’re gonna need everyone to keep their feet on the ground while dancing, just to be safe”), things really got out of control. The dance was underway. We were jumping on our seats, sashaying down the aisles. There was a mosh pit in the exit row. A couple began making out. People drummed on the overhead compartments. We screamed our heads off to I Wanna Dance With Somebody by Whitney Houston. This disco was not at all silent. We were doing things that would get any other flight grounded. I could not stop thinking, “How did this happen?” “What are we doing here?” “How is this even legal?”

After an hour of fun, we, unfortunately, had to take our seats for landing. The party was over, but the experience wouldn’t have to be for Delta flyers. After all, the silent disco was a celebration for Delta’s first day of partnering with LSTN to provide high-quality headphones in their first-class cabins. LSTN headphones are constructed with sustainable wood for a vintage look and, although they’re not noise-cancelling, they make an excellent travel accessory—especially on long flights where you may not want to have an earbud jammed in your ear for upwards of 5 hours. Plus, LSTN is also a philanthropic venture—the company was founded with the goal to provide hearing aids all over the world and has already helped over 24,000 people worldwide. 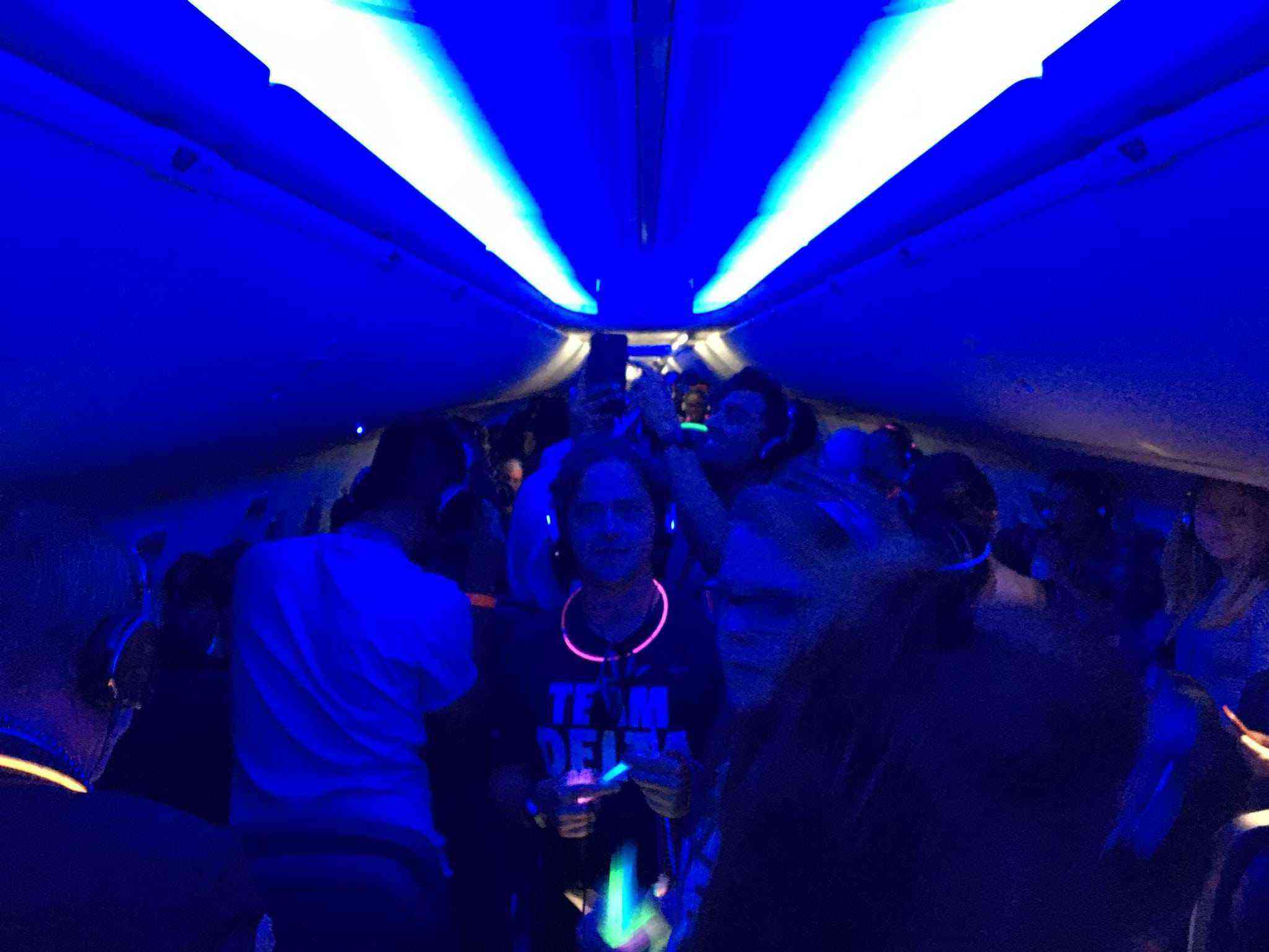 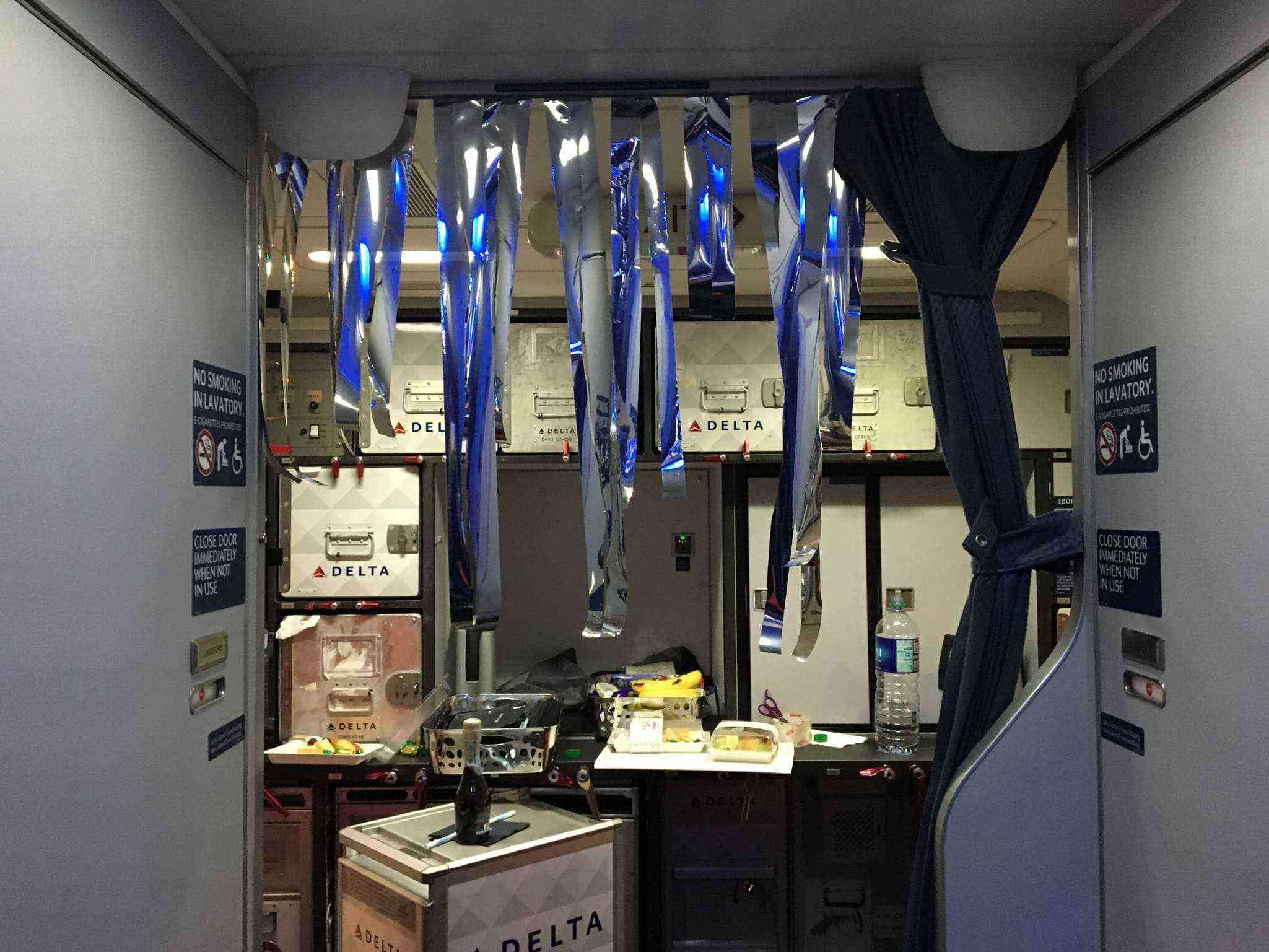 Touching down around 1 am, we all wondered what the hell just happened to us. It felt like an out-of-body experience. And although it seemed like an impossible feat–throwing a rave at 30,000 feet above New York City –somehow it all worked out. Let’s hope Delta is getting into the rave plane market because this would be a great way to travel.