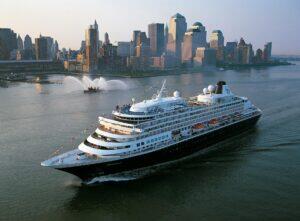 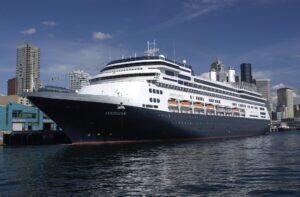 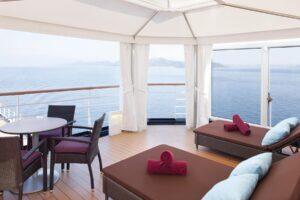 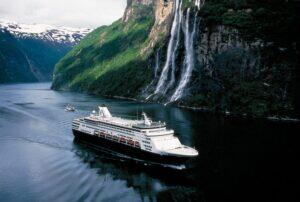 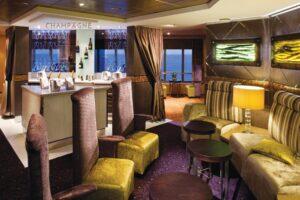 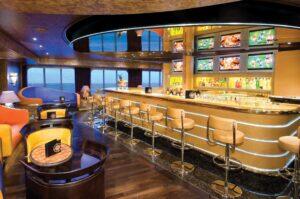 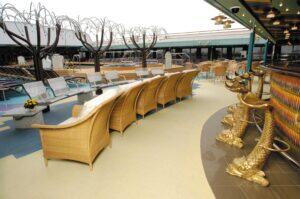 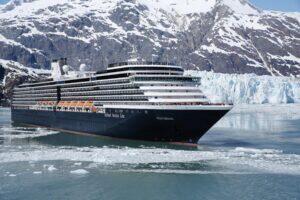 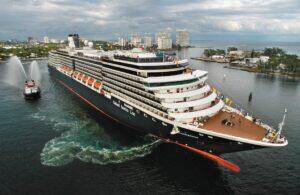 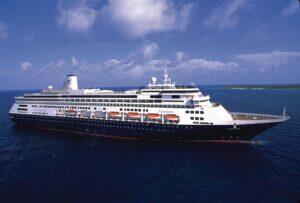 Best For People Who Want

Should Be Avoided By People Who Prefer

Contemporary, with a tastefully understated yet elegant decor, this gorgeous ship features Holland America memorabilia throughout the ship in addition to a $2 million collection of European and Asian art. Some of the most striking pieces are the “Terracotta Warriors,” life-size human and equine terra cotta figures, reproductions of the ancient statues unearthed in Xian, China. Adjacent to the Explorer’s Lounge, an enormous mural depicts the original Amsterdam built in the 17th century while the main dining room features a huge circular panel resembling stained glass.

The layout of the Amsterdam is not much different from the rest of the Holland America fleet. The differences are mostly in the decor. With most inside public areas concentrated on two decks, few passengers have trouble finding their way around.

Boarding visitors are greeted by the nearly 30-foot tall Astrolabe clock tower at the foot of a three-deck high stairway. The main public areas feature mostly warmly colored upholstery and leathers, damask fabrics, mahogany tones, and gold accents, the ship feels at times like an elegant old hotel. The gorgeous two-level Queen’s Lounge, more a nightclub than a theater, presents Amsterdam’s lavish floorshows. Head for the banquettes for the best sight lines. The Explorer’s Lounge offers cognac, cigars, delectable chef-designed chocolates and a string quartet at night. The Explorations Cafe (and Hudson Room within it) would seem more intimate if there weren’t so many passengers passing through it all the time. The Crow’s Nest, atop the ship, is an observation lounge by day and a disco after dark. Fresh hot popcorn is always available in the Wajang Movie Theater, where a selection of near first-run movies will be presented throughout the cruise (be sure to check the entire schedule, your favorite feature may or may not play more than once). The beautiful wood-paneled Erasmus library is almost as large as the casino. Three boutiques complete the public area. The popular Ocean Bar offers sea views.

Near the entrance to Amsterdam’s Crows Nest, be sure to admire the Four Seasons sculptures originally created for the old Nieuw Amsterdam in 1938, and purchased back from a private collector.

The main dining room, La Fontaine offers an attractive balance of contemporary cuisine and more traditional fare. While the menu always features something a bit bolder, such traditional favorites as grilled salmon and prime rib remain on offer, along with lighter and vegetarian cuisine.

The menu at The Pinnacle Grill at the Odyssey Restaurant is innovatively Italian, with a wine list offering several more excellent Italian choices than La Fontaine. The casual Lido will make you the best omelet you’ve ever tasted in the morning and occasionally offers Indonesian ‘rice tables’ or Indian curry stations at lunchtime.

Holland America’s Lido buffets have always been among the best at sea, with a variety of salads, breads, hot entrees and sumptuous desserts.

Casual breakfast and luncheon buffet are served in the Lido restaurant, adjacent to the pool. A bright, cheerful place with separate salad, drink, deli, dessert, and stir-fry stations. You seldom have to wait, even during days at sea. Hamburgers and hotdogs are served poolside until 4:00 p.m.

The Queen’s Show Lounge’s floor shows usually include an accomplished concert pianists of some renown, a comedian and one other act (magician, juggler, singer). Broadway style productions created by Anita Mann have gotten much better at Holland America the last few years, featuring enthusiastic choreography, singing and state-of-the-art special effects. The highlights of the shows on Holland America are usually the lavish costumes.

There is a full-service Ocean Spa (run by Steiner’s LTD) comprising a hair salon and massage and facial facilities. The bright Center features modern exercise machines, free weights, a sauna and steam room and a juice bar. classes ranging from yoga to aerobics are offered several times a day. Some of the classes carry a fee that tends to be rather expensive. There are two swimming pools, one with a retractable dome, and four Jacuzzis. The tennis courts double as volleyball courts. Joggers and speed walkers can do their morning constitutional on the terrific wraparound Promenade Deck, also lined with wooden deck chairs for a wonderful spot for reading, daydreaming, or even snoozing in the grand style of the cruisers of decades long past.

Slightly dressier on formal nights than other Holland America ships, especially on extended voyages, many men wear tuxes though a dark suit is certainly acceptable; daytime attire is casual, but jeans and a tee-shirt will appear a little underdressed.

A sister ship to the Rotterdam, one of the older, but not oldest class of Holland America ships.

Amsterdam is not only a sister ship to the Rotterdam, she also shares the status of “flagship” with her, making Holland America the only cruise line to have two flagships. Obviously, they liked them both so much they just couldn’t make up their minds. But if you look at the subtle differences in the slightly larger Amsterdam, she just might win you over because of her extra suites comprising an all-suite “Concierge Deck.” This version of Amsterdam is the third ship named for the capital of Holland. Like the Rotterdam, she has twin smokestacks, but she is the first Holland America ship with Azipod propulsion, giving her a top-speed of 22.5 knots.

Designed for extended voyages, including an annual world cruise, she offers the best of both contemporary and transatlantic liner-style cruising, tasteful elegance without pomposity. As flagship, she offers the most gracious and polished service of all the HAL ships, exemplary cuisine, and a gorgeous alternative restaurant.

Holland America’s Indonesian and Filipino crew is warm and gracious, though not always as fluent in English as American and British passengers might prefer. Speak slowly and make sure they understand what you need, because they can be too polite to ask you to repeat yourself.

For years Holland America was known for its no-tipping policy, intended to make passengers believe that staff were doing it for love, rather than money. Now, gratuities of $10.00 per person (including children) are automatically added daily to the shipboard account for dining and stateroom service. Visit the front desk to adjust that amount. A 15 percent service is automatically added to bar bills.

All cabins have two single or one queen-sized bed, abundant closet and drawer space, and safes. The remote-controlled color TV’s show closed circuit movies as well as CNN International. There is a small dressing table, couch and armchair. The bathrooms have hair dryers and lovely toiletry; only outside cabins have both bathtubs and showers. Some cabins have connecting doors for families preferring two cabins.

Suites and minisuites come with many perks – large balconies, marble bath with whirlpool, TV/VCR, terry cloth bathrobes, personalized, stationery, complimentary laundry, high tea served in suite, free videos, cocktail party with the captain, feather pillows and special disembarkation privileges. All suite guests may avail themselves of a concierge staff who remain stationed inside the concierge-class lounge on the same deck. This lounge features DVDs, books and tempting snacks available to suite passengers. The concierge will assist passengers in booking shore excursion reservations, alternative dining reservations and any other matters that would ordinarily involve standing in a slow-moving line.

There are four self-service launderettes (a wash and dry cost $2 including detergent) featuring ironing board/iron and folding table.

The third ship to bear the name of the Dutch capital in Holland America Line’s history and sister ship of Rotterdam, the Amsterdam was launched in 2000. At the heart of the ship’s atrium is the Planeto Astrolabium, a commissioned signature sculpture that is functional—the Astrolabe tracks constellations, the planets, world time, and ship time. Displayed throughout the ship are original art deco pieces that once graced the Nieuw Amsterdam of 1938.

The most traditional ships in the fleet, the interiors of sister ships Amsterdam and Rotterdam display abundant wood appointments in the public areas on promenade and lower promenade decks and priceless works of art throughout.

The Ocean Bar, Explorer’s Lounge, Wajang Theater, and Crow’s Nest are familiar lounges to longtime Holland American passengers. Newer additions include the spa’s thermal suite, a culinary-arts demonstration center in the theater, Explorations Café, and expansive areas for children and teens. Multimillion-dollar collections of art and artifacts are showcased throughout both vessels. In addition to works commissioned specifically for each ship, Holland America Line celebrates its heritage by featuring antiques and artworks that reflect the theme of worldwide Dutch seafaring history.

Holland America Line has enjoyed a distinguished record of traditional cruises, world exploration, and transatlantic crossings since 1873—all facets of its history that are reflected in the fleet’s multimillion-dollar shipboard art and antiques collections. Even the ships’ names follow a pattern set long ago: all end in the suffix dam and are either derived from the names of various dams that cross Holland’s rivers, important Dutch landmarks, or points of the compass. The names are even recycled when vessels are retired, and some are in their fifth and sixth generation of use.

Noted for focusing on passenger comfort, Holland America Line cruises are classic in design and style, and with an infusion of younger adults and families onboard, they remain refined without being stuffy or stodgy. Following a basic design theme, returning passengers feel as at home on the newest Holland America vessels as they do on older ones.

WHAT YOU SHOULD KNOW

Pros
Cons
Rotterdam has the Retreat, a resort-style pool on the aft Lido deck
As the line’s flagships,Rotterdam and Amsterdam have the fleet’s most elegant interior decor
Realistic landscapes with surreal touches accent walls in Amsterdam’s Pinnacle Grill
One-way window glass in outside cabins on lower promenade deck does not offer occupants complete privacy
There is little shipboard nightlife more than an hour after dinner
Despite excellent facilities designed for kids and teens, family cabins are limited

What to expect on board

Staterooms are spacious and comfortable, although fewer have private balconies than newer fleetmates. Lanai cabins were added during Rotterdam’s latest upgrade. Every cabin has adequate closet and drawer/shelf storage, as well as bathroom shelves. Some suites also have a whirlpool tub, powder room, and walk-in closet. Connecting cabins are available in a range of categories, as well as a number of triple and a few quad cabins.

Extras include duvets on beds, a fully stocked minibar, and personalized stationery. Penthouse and Deluxe Verandah suites have exclusive use of the Neptune Lounge, concierge service, canapés before dinner, binoculars and umbrellas for use during the cruise, an invitation to a VIP party with the captain, and complimentary laundry, pressing, and dry-cleaning services.

Twenty-one staterooms are designed for wheelchair accessibility on Amsterdam, 22 on Rotterdam.

Popular spots before dinner are the Ocean Club and Explorer’s Lounge, where servers pass through with canapés. Later, those bars are quiet spots for drinks and conversation. For livelier action aboard Amsterdam, there’s a Sports and Piano Bar; on Rotterdam, try Mix—where champagne, martinis, ales, and spirits are served near the piano. The late-night dance spot on both is the Crow’s Nest.

Treatments in the Greenhouse Spa include a variety of massages, body wraps, and facials, as well as acupuncture and tooth-whitening services. A thermal suite with heated ceramic lounges for relaxation and dry sauna and steam rooms is available for a fee or complimentary when a spa appointment is booked. Changing rooms for men and women have complimentary saunas.

Explore More Ships in this Line