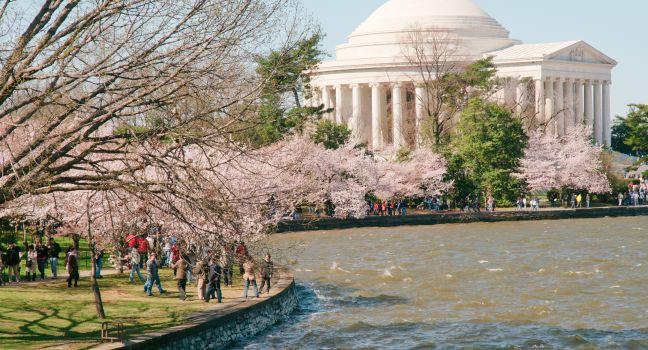 In the 1930s, Congress decided to build a monument to Thomas Jefferson as prominent as the Washington and Lincoln memorials. Workers scooped and moved tons of the river bottom to create dry land for the spot due south of the White House where the monument was built. Jefferson had always admired the Pantheon in Rome, so the memorial's architect, John Russell Pope, drew on it for inspiration. His finished work was dedicated on April 13, 1943, the bicentennial of Jefferson's birth. The bronze statue of Jefferson stands on a 6-foot granite pedestal. Surrounding the statue are his writings about freedom, which have since come under scrutiny for their inherent hypocrisy, as Jefferson owned many slaves in his lifetime. The Smithsonian National Museum of African American History and Culture delves into Jefferson's transgressions in its Monticello exhibit, Paradox of Liberty.