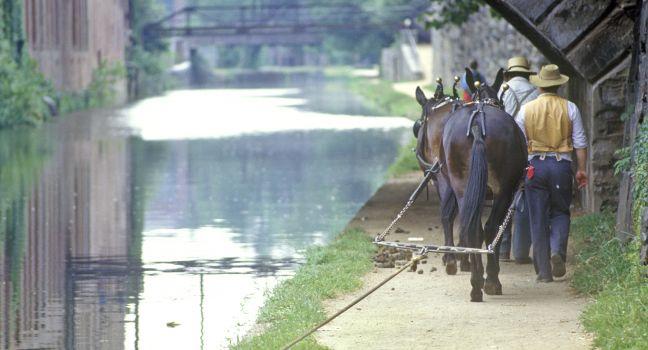 George Washington was one of the first to advance the idea of a canal linking the Potomac with the Ohio River across the Appalachians. Work started on the Chesapeake & Ohio Canal in 1828, and when it opened in 1850, its 74 locks linked Georgetown with Cumberland, Maryland, 185 miles to the northwest (still short of its intended destination). Lumber, coal, iron, wheat, and flour moved up and down the canal, but it was never as successful as its planners had hoped it would be. Many of the bridges spanning the canal in Georgetown were too low to allow anything other than fully loaded barges to pass underneath, and competition from the Baltimore & Ohio Railroad spelled an end to profitability. Today the canal is part of the National Park System; walkers and cyclists follow the towpath once used by mules, while canoeists paddle the canal's calm waters. You could walk or pedal the length of the canal, but most cyclists stop at Great Falls, Maryland.