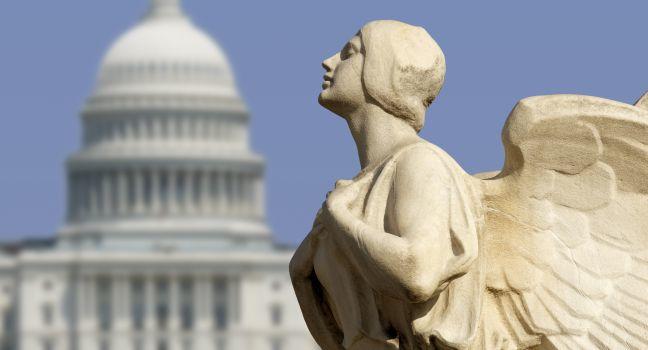 Beneath the Capitol's magnificent dome, the day-to-day business of American democracy takes place: senators and representatives debate, coax, and cajole, and ultimately determine the law of the land. For many visitors the Capitol is the most exhilarating experience Washington has to offer. It wins them over with a three-pronged appeal: it's the city's most impressive work of architecture; it has on display documents, art, and artifacts from 400 years of American history; and its legislative chambers are open to the public, allowing you to actually see your lawmakers at work.

Before heading to the Capitol, pay a little attention to the grounds, landscaped in the late 19th century by Frederick Law Olmsted, famed for New York City's Central Park. On these 68 acres are both the city's tamest squirrels and the highest concentration of TV news correspondents, jockeying for a good position in front of the Capitol for their "stand-ups." A few hundred feet northeast of the Capitol... READ MORE

Beneath the Capitol's magnificent dome, the day-to-day business of American democracy takes place: senators and representatives debate, coax, and cajole, and ultimately determine the law of the land. For many visitors the Capitol is the most exhilarating experience Washington has to offer. It wins them over with a three-pronged appeal: it's the city's most impressive work of architecture; it has on display documents, art, and artifacts from 400 years of American history; and its legislative chambers are open to the public, allowing you to actually see your lawmakers at work.

Before heading to the Capitol, pay a little attention to the grounds, landscaped in the late 19th century by Frederick Law Olmsted, famed for New York City's Central Park. On these 68 acres are both the city's tamest squirrels and the highest concentration of TV news correspondents, jockeying for a good position in front of the Capitol for their "stand-ups." A few hundred feet northeast of the Capitol are two cast-iron car shelters, left from the days when horse-drawn trolleys served the Hill. Olmsted's six pinkish, bronze-top lamps directly east of the Capitol are worth a look, too.

The design of the building was the result of a competition held in 1792; the winner was William Thornton, a physician and amateur architect from the West Indies. With its central rotunda and dome, Thornton's Capitol is reminiscent of Rome's Pantheon. This similarity must have delighted the nation's founders, who sought inspiration from the principles of the Republic of Rome.

The cornerstone was laid by George Washington in a Masonic ceremony on September 18, 1793, and in November 1800 both the Senate and the House of Representatives moved down from Philadelphia to occupy the first completed section: the boxlike portion between the central rotunda and today's north wing. (Efforts to find the cornerstone Washington laid have been unsuccessful, though when the east front was extended in the 1950s, workers found a knee joint thought to be from a 500-pound ox that was roasted at the 1793 celebration.) By 1807 the House wing had been completed, just to the south of what's now the domed center, and a covered wooden walkway joined the two wings.

The "Congress House" grew slowly and suffered a grave setback on August 24, 1814, when British troops led by Sir George Cockburn marched on Washington and set fire to the Capitol, the White House, and numerous other government buildings. (Cockburn reportedly stood on the House speaker's chair and asked his men, "Shall this harbor of Yankee democracy be burned?" The question was rhetorical; the building was torched.) The wooden walkway was destroyed and the two wings gutted, but the walls were left standing after a violent rainstorm doused the flames. Fearful that Congress might leave Washington, residents raised money for a hastily built, temporary "Brick Capitol" that stood where the Supreme Court is today. Architect Benjamin Henry Latrobe supervised the rebuilding of the original Capitol, adding American touches such as the corncob-and-tobacco-leaf capitals to columns in the east entrance of the Senate wing. He was followed by Boston-born Charles Bulfinch, and in 1826 the Capitol, its low wooden dome sheathed in copper, was finished.

North and south wings were added in the 1850s and 1860s to accommodate a growing government trying to keep pace with a growing country. The elongated edifice extended farther north and south than Thornton had planned, and in 1855, to keep the scale correct, work began on a taller, cast-iron dome. President Lincoln was criticized for continuing this expensive project while the country was in the throes of the Civil War, but he called the construction "a sign we intend the Union shall go on." This twin-shell dome, a marvel of 19th-century engineering, rises 285 feet above the ground and weighs 4,500 tons. It expands and contracts up to 4 inches a day, depending on the outside temperature. The allegorical figure atop the dome, often mistaken for Pocahontas, is called Freedom. Sculptor Thomas Crawford had first planned for the 19.5-foot-tall bronze statue to wear the cloth liberty cap of a freed Roman slave, but Southern lawmakers, led by Jefferson Davis, objected. An "American" headdress composed of a star-encircled helmet surmounted with an eagle's head and feathers was substituted. A light just below the statue burns whenever Congress is in session.

The Capitol has continued to grow. In 1962 the east front was extended 33.5 feet, creating 100 additional offices. Preservationists have fought to keep the west front from being extended, because it's the last remaining section of the Capitol's original facade. A compromise was reached in 1983, when it was agreed that the facade's crumbling sandstone blocks would simply be replaced with stronger limestone.

In 2008 the largest addition to the Capitol in its history opened. The Capitol Visitor Center is about as large as five football fields and includes an exhibit hall, auditorium, two theaters, meeting rooms, gift shops, and a restaurant. It is positioned below the east side of the Capitol so as not to detract from the appearance of the Capitol grounds.

In late 2014, another major project was launched to restore the Capitol's cast-iron dome, the first such effort in more than 50 years. The project stole some of the majesty from the building, as workers erected a scaffolding skeleton around the entire dome—featuring 52 miles of steel pipe—which has surely frustrated visiting photographers from the world over. But the exterior work is scheduled for completion in late 2015, with work on the interior dome expected to extend until the fall of 2016—just in time for the 2017 inaugural ceremonies celebrating the next president.

Tours begin in the center. After the 13-minute introductory film Out of Many, One, groups are led into the Rotunda. At the dome's center is Constantino Brumidi's 1865 fresco, Apotheosis of Washington. The figures in the inner circle represent the 13 original states; those in the outer ring symbolize arts, sciences, and industry. The flat, sculpture-style frieze around the Rotunda's rim depicts 400 years of American history and was started by Brumidi in 1877. While painting Penn's treaty with the Indians, the 74-year-old artist slipped on the 58-foot-high scaffold and almost fell off. Brumidi managed to hang on until help arrived, but he died a few months later from kidney failure. The work was continued by another Italian, Filippo Costaggini, but the frieze wasn't finished until American Allyn Cox added the final touches in 1953.

The Rotunda's eight immense oil paintings are of scenes from American history. The four scenes from the Revolutionary War are by John Trumbull, who served alongside George Washington and painted the first president from life. Since 1852, 31 people have lain in state or in honor in the Rotunda, including 10 presidents, from Abraham Lincoln to Gerald Ford. In 2005, Civil rights activist Rosa Parks became the first woman to lie in honor. Most recently, Senator Daniel Inouye, who served as President Pro Tempore of the Senate, laid in state in December 2012.

South of the Rotunda is Statuary Hall, once the legislative chamber of the House of Representatives. The room has an architectural quirk that maddened early legislators: a slight whisper uttered on one side of the hall can be heard on the other. (This parlor trick doesn't always work; sometimes the hall is just too noisy.) When the House moved out, Congress invited each state to send statues of two great deceased residents for placement in the former chamber. About half of the accumulated statues are here; the rest were dispersed to other spots in the Capitol, including the visitor center.

To the north, on the Senate side, is the chamber once used by the Supreme Court, and, above it, the splendid Old Senate Chamber, both of which have been restored. In the Brumidi Corridor, on the ground floor of the Senate wing, frescoes and oil paintings of birds, plants, and American inventions adorn the walls and ceilings. Intricate, Brumidi-designed bronze stairways lead to the second floor. The Italian artist also memorialized several American heroes, painting them inside trompe l'oeil frames. Some frames were left blank. The most recent one to be filled, in 1987, honors the crew of the space shuttle Challenger.

Free gallery passes to watch the House or Senate in session can be obtained only from your representative's or senator's office; both chambers are open to the public when either body is in session. In addition, the House Gallery is open 9 am to 4:15 pm weekdays when the House is not in session. International visitors may request gallery passes from the House or Senate Appointment Desks on the upper level of the visitor center. Your representative's or senator's office may also arrange for a staff member to give you a tour of the Capitol or set you up with a time for a Capitol Guide Service Tour. When they're in session, some members even have time set aside to meet with constituents. You can link to the home page of your representative or senator at www.house.gov and www.senate.gov.

Prior to entering the visitor center, allow about 45 minutes to go through security. Bags can be no larger than 14 inches wide, 13 inches high, and 4 inches deep, and other possessions you can bring into the building are strictly limited. (The full list of prohibited items is posted at www.visitthecapitol.gov). There are no facilities for leaving personal belongings, but you can check your coat. If you're planning a visit, check the status of tours and access; security measures may change.

Did you know you can order a flag that's flown over the Capitol? It's as easy as filling out a form on your legislator's website. Makes for a unique memento of your visit or even a way to commemorate an event, milestone, or special someone in your life.

East end of The Mall
Washington, District of Columbia  20510, USA