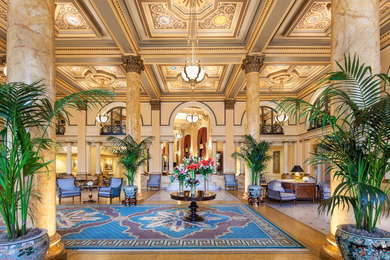 This grandiose, opulent Beaux-Arts Hotel, the crown jewel on DC’s most famous street (and just a block from the White House), has sat in the middle of the city’s political and social scene since 1818. Often called the “Residence of Presidents,” it has also hosted celebrities and international dignitaries through the ages. Today, the Willard, with its ornate sculptural decorations, golden chandeliers, gilded details, and grandiose lobby, is the epitome of historical elegance, with top-notch service and state-of-the-art technology to boot.

Stop by the historic gallery off the lobby to peruse documents, photos, and artifacts relating to the famous people who have stayed here during its 200 years of business.

Photo: Guest room on Pennsylvania Avenue side of the hotel

Grand but comfortable rooms are large by DC standards—starting at 425 square feet. Elegant traditional décor with gilded accents, Federal-style furnishings, striped wallpaper, and state-of-the-art amenities assure a stay worthy of any dignitary. The suites are even more lavish. Most rooms have breathtaking views of either the White House, Pennsylvania Avenue, or downtown DC.

YOU SHOULD KNOW The windows are not well sealed, so some rooms experience street-traffic noise. The courtyard rooms tend to be quieter. 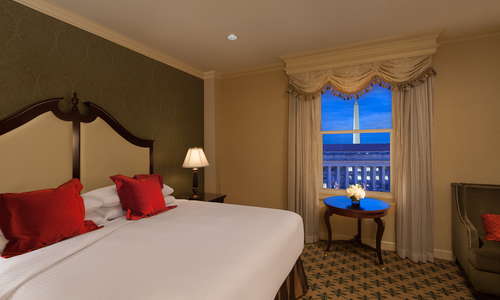 Photo: Guest room on Pennsylvania Avenue side of the hotel

The marble bathrooms may be on the small side (this is a historic hotel, after all), but they continue in the grand, beautiful style of the rest of the hotel. The toiletries are from Floris.

Over-the-top grandeur with its marble pillars, marble walls, and ornate ceiling lamps would make any king or queen feel at home in this cavernous lobby. Though you’ll probably run into more politicians than regals. People-watching is among the best in town. Be sure to look up at the gilded ceiling to see the seals of all lower 48 states (Alaska and Hawaii are in the nearby Peacock Alley hallway).

This grand and traditional lobby is said to be where the term “lobbyist” was coined, when people seeking to plead their individual cases discovered that President Grant liked to retreat here for a cigar. 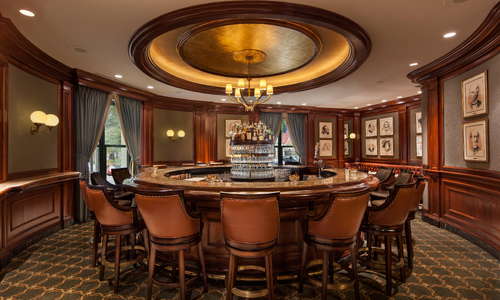 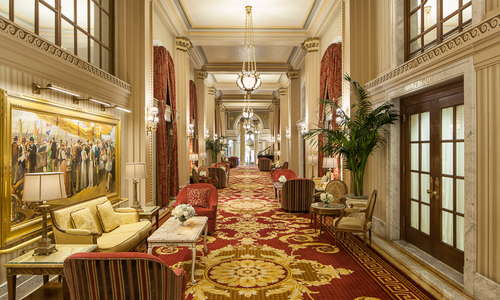 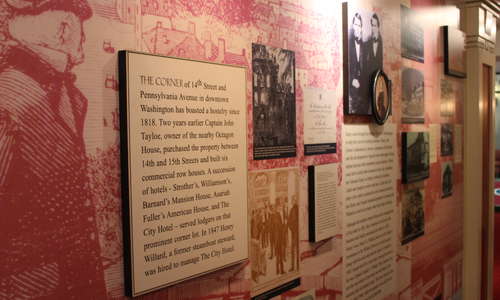 The signature Elizabeth Arden Red Door Spa is one of the city’s best, with four treatment rooms where you will be pampered with massages, facials, hair and nail services, and body treatments.

The huge gym, open 24 hours, offers state-of-the-art equipment, including treadmills, elliptical machines, and stationary bikes, as well as TRX suspension training equipment and hand weights. Complimentary headphones are provided. On a warm day, the outdoor relaxation terrace is the best place in the city to cool down. 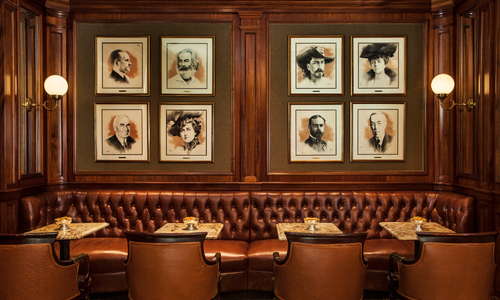 Thomas Jefferson, Abraham Lincoln, and Ulysses Grant all swilled drinks at Round Robin & Scotch Bar, the iconic mahogany-paneled bar; classic cocktails include the mint julep, said to be invented here by Henry Clay. The adjacent Scotch bar has more than 100 bottles of whiskey from Scotland’s best distilleries.

Positioned on Pennsylvania Avenue just a block from the White House, the Willard is perfectly located near DC’s most famous museums and monuments, as well as theaters, restaurants, and bars. Metro is the best mode of transport, with the Metro Center station just two blocks away.

Occidental Grill & Seafood (next door to the Willard) is a longtime local favorite (since circa 1906) for high-end surf ‘n’ turf; many of the politicians it has hosted through the years are captured in portraits on the wall. If you’re looking for something a little less extravagant, The Hamilton (1-minute walk) is a Clydes Group enterprise offering creative takes on American cuisine; live music takes place in the state-of-the-art venue downstairs.

A DC tradition since 1856, the Old Ebbitt Grill (2-minute walk) is full of historic charm; Teddy Roosevelt allegedly bagged some of the animal heads over the Main Bar. Keep an eye out for politicos. If you’re dying to show off your new Manolos, the rooftop POV bar at nearby W Washington is the place to go; its views over the Mall’s world-famous monuments and the White House are Instagram-worthy.

The Willard is the place to experience quintessential Washington. So many icons of American history—Thomas Jefferson, Buffalo Bill Cody, Walt Whitman, Mark Twain—have walked its grand halls, admiring the same gilded opulence that we see today. This is where Martin Luther King added the finishing touches to his “I Have A Dream Speech!” And where Julia Ward Howe penned “The Battle Hymn of the Republic.” Its location near the White House and National Mall is primo, its service is exquisite, and every nook and cranny seems to have a story. It’s an homage to Washington’s great past, but with all of the comforts and amenities required by the modern-day traveler. 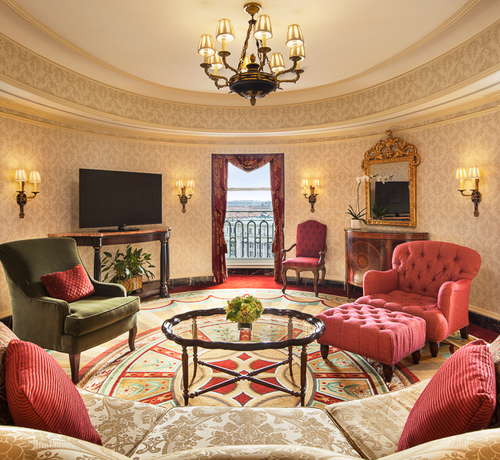 #3 The Swankiest Hotels in Washington D.C.

#7 The Best Hotels for Rooms With Stunning Views of Washington D.C.

#13 The Best Hotels in Washington D.C. With a Ton of History 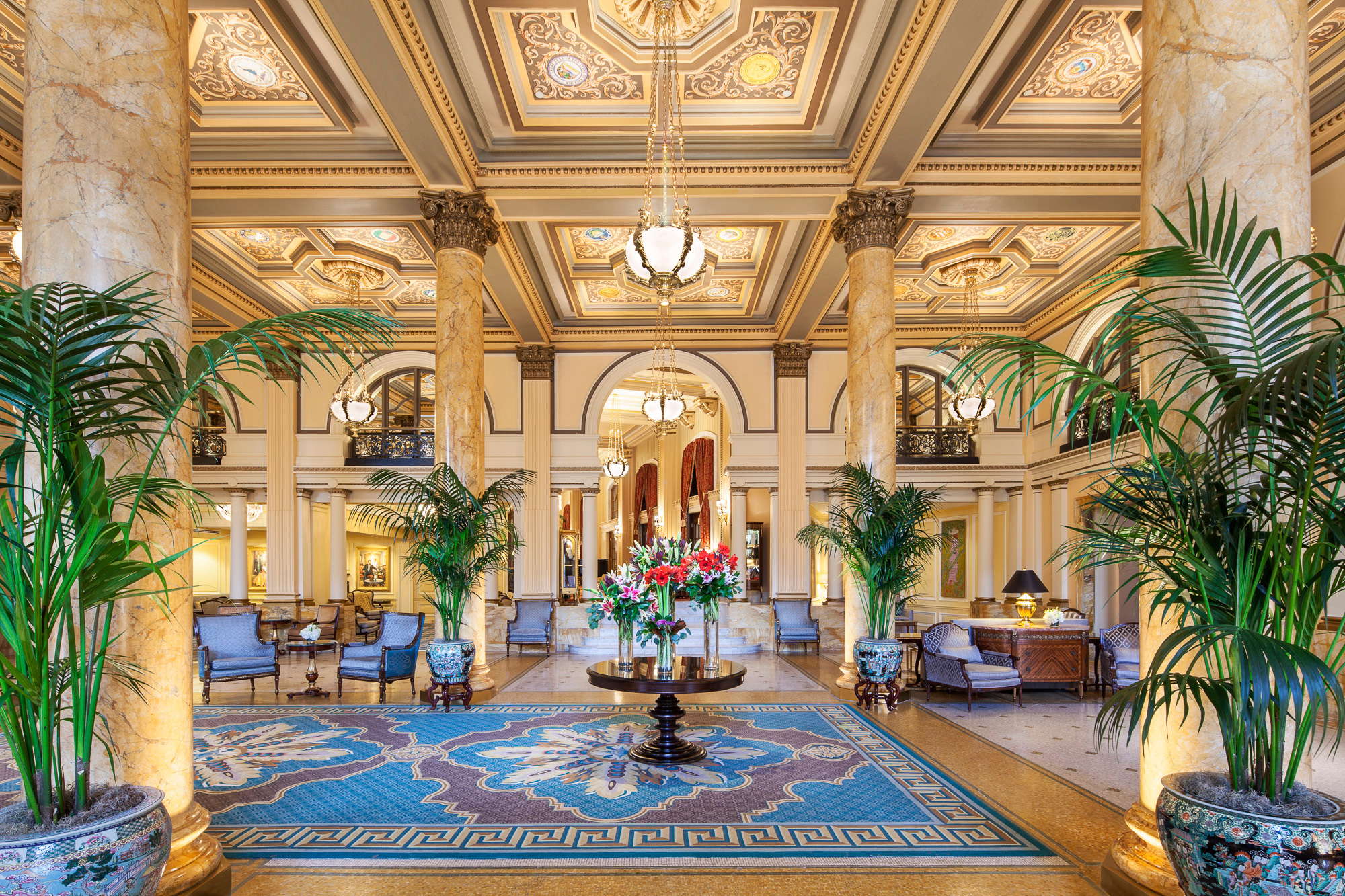 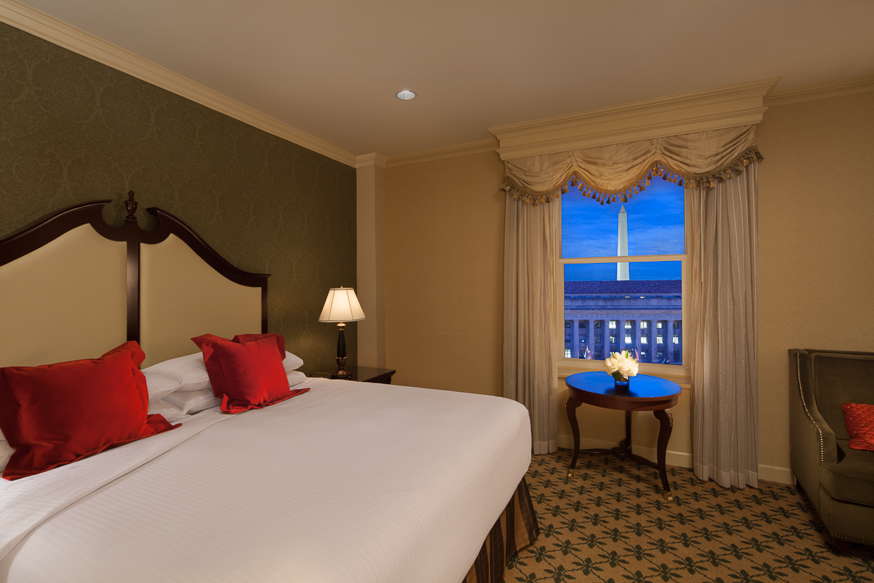 room
Photo: Guest room on Pennsylvania Avenue side of the hotel 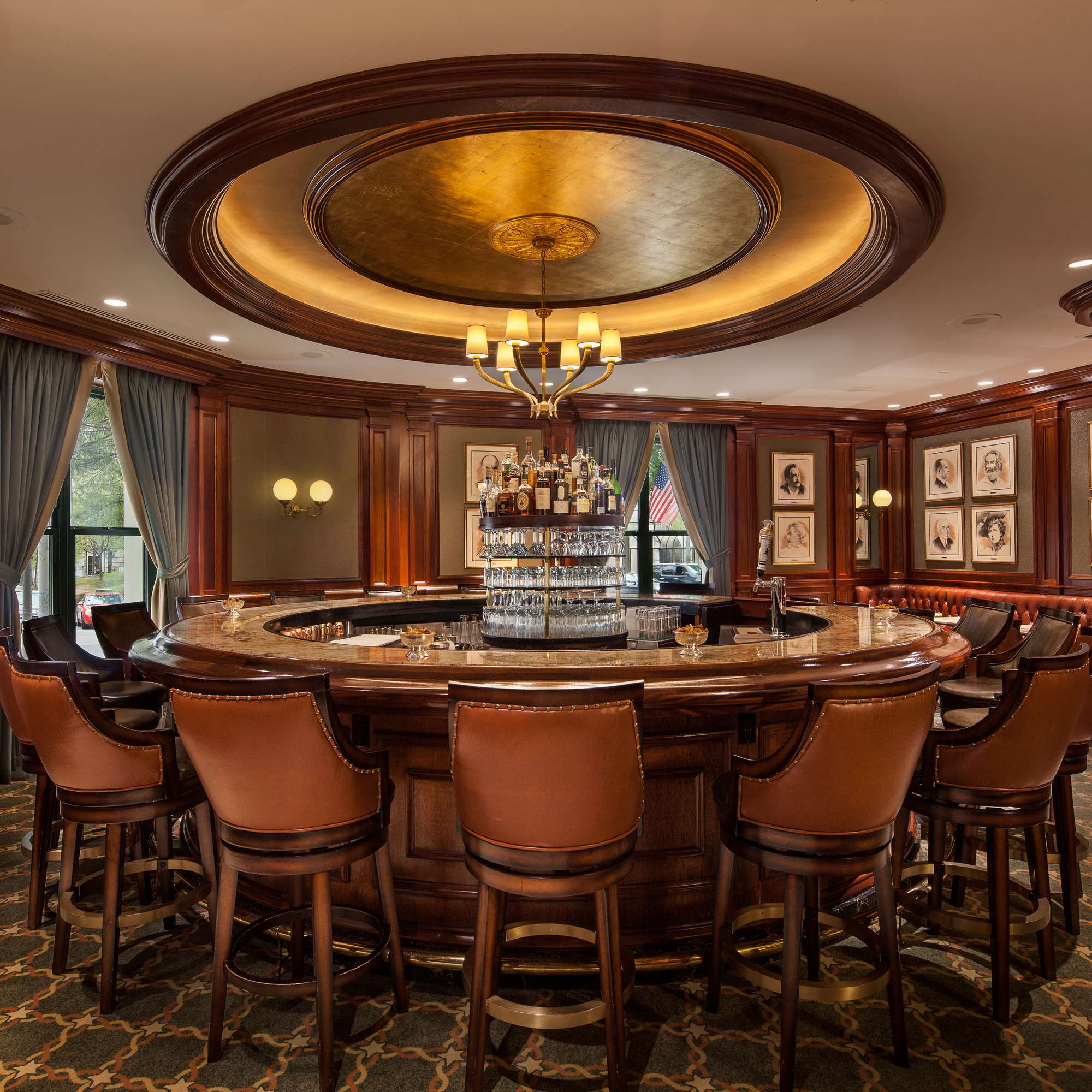 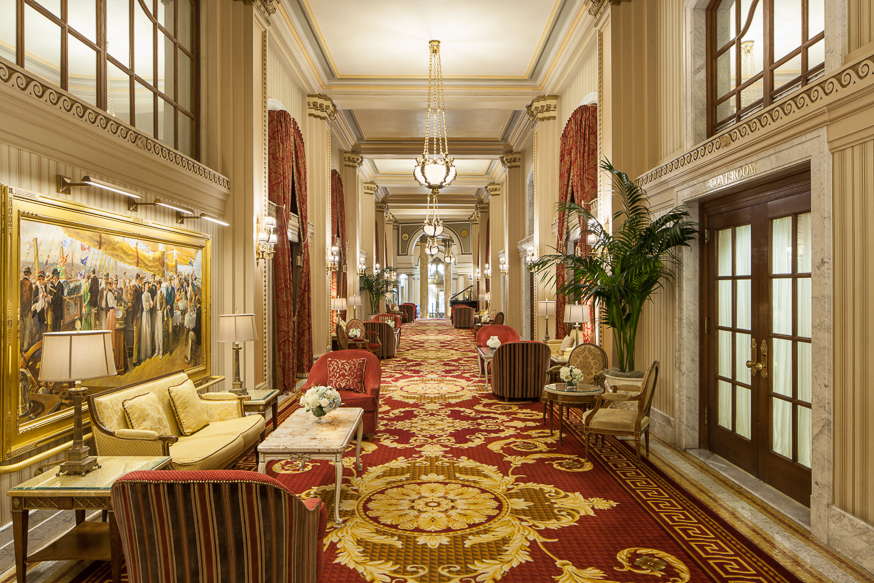 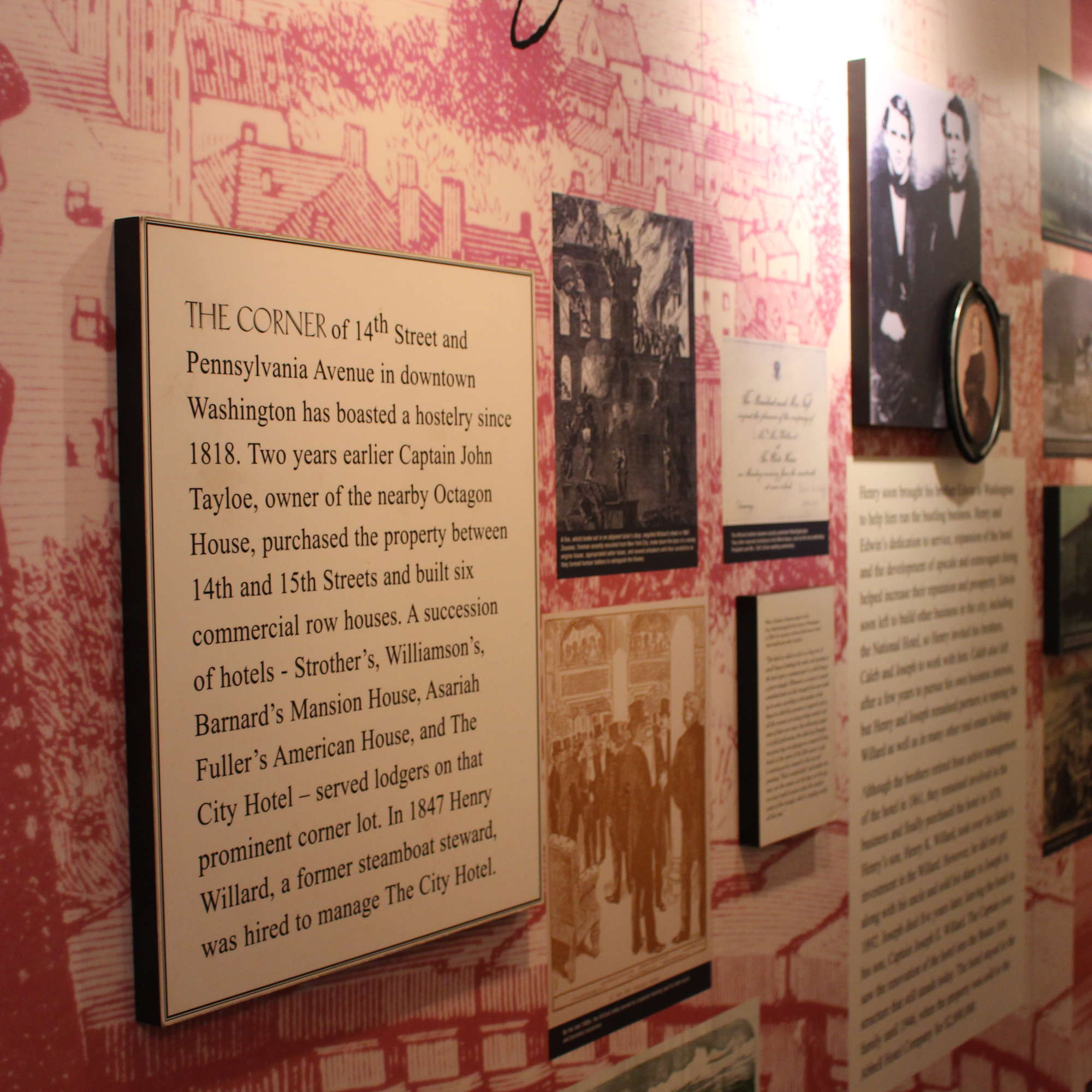 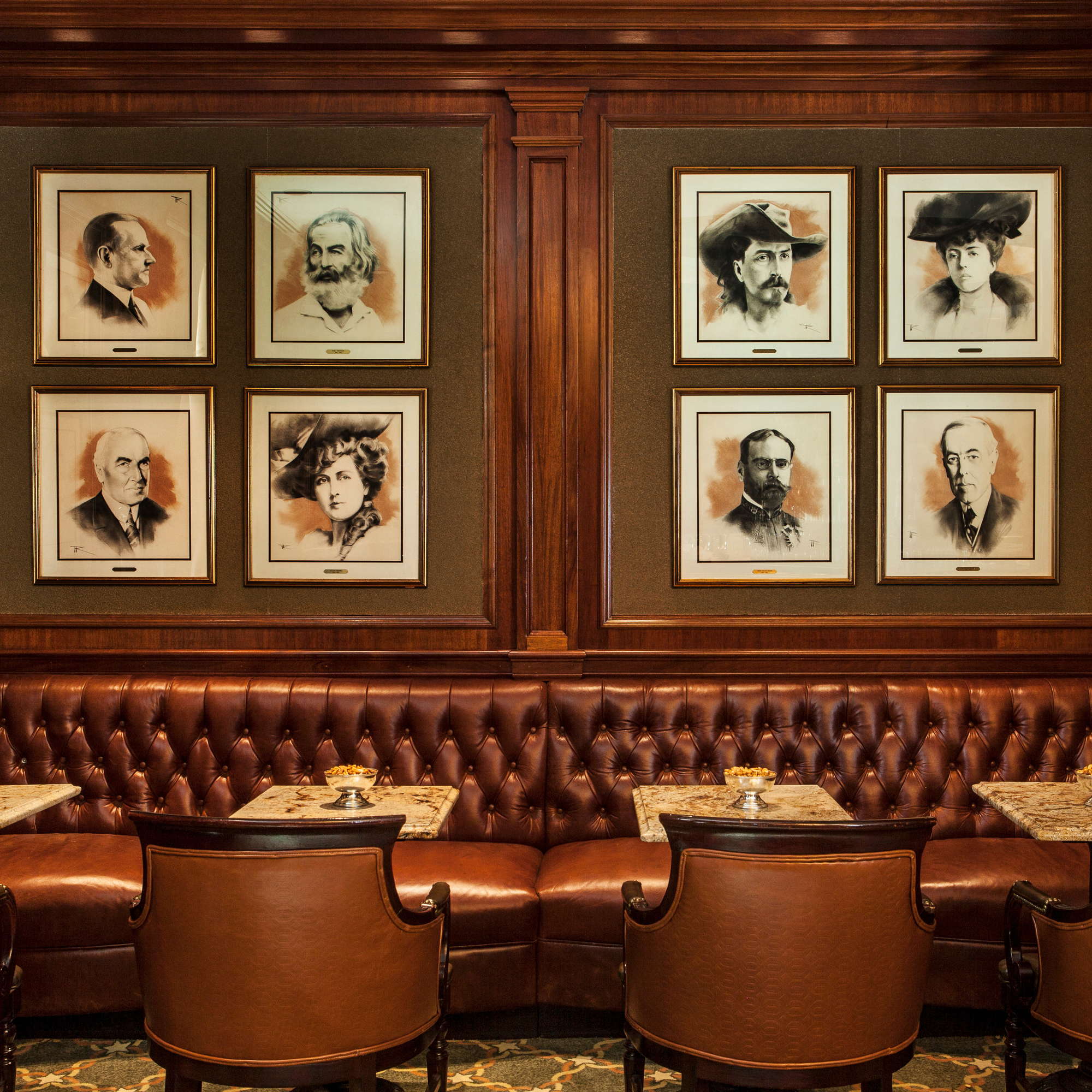