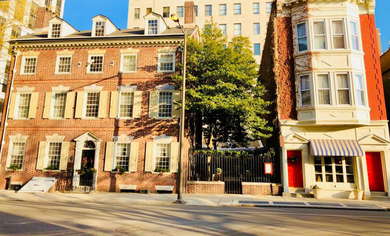 This is a lovely bed-and-breakfast on the national register of historic places in leafy Society Hill. It's within walking distance of historic Old City, the Pine Street shopping corridor, and Center City to the north, but it's away from other hotels and touristy spots, giving visitors an authentic neighborhood experience. The house itself is a historic treasure, built in 1787 in Colonial style, and maintains its original hardwood floors and a clock that is said to have bullet holes in it from the Revolutionary War. Ask the hotel staff for a fascinating little book detailing the building's history. Many rooms maintain a very mixed Colonial decor, but with 21st-century amenities like air-conditioning and TVs. Several suites have full kitchenettes which are more modern looking. Afternoon tea and homemade cookies are served daily at 3 pm and a complimentary glass of wine is served from 4-5pm at the partner restaurant, M Restaurant or at the in-house bar.

YOU SHOULD KNOW While it brands itself as a high-end luxury hotel, Morris, despite its prized location and colonial pedigree, lacks specific 21st-century amenities that could qualify that moniker.

Rooms are a melange of patterns with Colonial (antiques and reproductions) and modern styles. The presidential suite has a marble fireplace. There's a lot of florals, paisleys, oriental rugs and floral or pet paintings without one uniform theme or clean lines, so minimalists beware, however, it's tastefully done. All rooms all have Simmons beauty sleep mattresses in king or queen with triple sheeting: satin and down feather or hypoallergenic pillows. A hotel emblemed robe is provided. There are plenty of couches and stuffed chairs. Rooms have cable television on LG Flat Screen TVs, iHome docking stations and phones with colonial style desks and chairs which are either reproductions or antiques.

Upon request and for a fee the following amenities can be added to your room: a bottle of champagne, a bottle of wine, an artisanal cheese plate, a bottle of house-infused liquor, and a gift card for the M Restaurant.

Bathrooms vary. Some have walk-in showers, others have jacuzzi tubs and separate showers and some have a bathtub with a movable shower head. Towels are Egyptian cotton. The amenities are the eco-friendly Pharmacopia keeping in line with the "80% LEED-Certified" eco-conscious theme of the hotel.

The Courtyard/Garden entrance is replete with chirping birds and faces the lobby. The cozy and inviting lobby consists of a sitting room with two fireplaces and a library where one could read with light flooding in from atrium. There are comfortable period piece chairs and two stunning 18th-century portraits. Coffee, tea and fresh water are available.

History Buff's take note!: The original Reynolds-Morris house is a twin of the first White House (President's House) and is one of the strongest examples of Colonial residential architecture still standing. Thomas Jefferson, George Washington and John Adams are all said to have met and discussed the Constitution at the Morris House Hotel and M Restaurant.

The sitting room is where breakfast is held. A continental breakfast is served from 7 to 10 a.m. Typical offerings are fresh fruit, house-made honey and flax granola, wholegrain cereals, yogurts, an assortment of locally baked bread and pastries (gluten-free and vegan), instant oatmeal, juice, etc. with a selection of teas and Philly Fair Trade coffee. The M restaurant is separate but a partner restaurant. It attracts hotel guests and a pre-Walnut Street Theatre crowd and hence has a pre-theater menu as well as its standard seasonal new American menu with "colonial touches." Live Jazz is played in the garden every Wednesday and Friday from 6 to 8:30 p.m.

Daily complimentary wine is served from 4 to 5 p.m. in the M restaurant, and if it is closed, the wine will be served in the hotel's bar. There is a full in-house bar with seven blue leather back high chairs that have a 1920's art-deco feel, it's open Tuesday through from Sunday 4:30 p.m. to 9:30 p.m. (not the official city hour of 2 a.m. for you night owls)

Society hill is 100% walkable and very close to Old City, but if you want to get to West Philly (University City) or to South Philly you can take a bus, subway or uber/lyft/taxi. It's a 2-minute walk to a public bus on 8th and Walnut. It's an 18-minute walk to the Market Frankford Line City Hall subway station.

24-7 concierges can give recommendations and there is an online FAQ but manager Lenka Martinkova recommends the Philly classic Jones Restaurant ( 5-minute walk) is a swanky chic retro lounge with American comfort-food. She also recommends Talula's Garden (2-minute) which serves high-end seasonal American farm to table in a chic barn setting with a summer garden.

Cuba Libre Restaurant and Rum Bar (16-minute walk) is a lively restaurant and bar with Saturday night tango and salsa dancing. The Plough and the Stars (15-minute walk)is an upscale authentic Irish pub with a wide variety of pints in a spacious former bank also with outdoor seating.

The hotel is a history lover's dream and can be an oasis of tranquility with old world charm furnished in Colonial style. It has a beautiful atrium which also makes it a popular location for weddings. It's tucked away in a bustling urban neighborhood and the M restaurant is a bonus, with its new American fine dining with colonial touches (a popular menu style only in Philadelphia!) and live jazz music best heard outdoors in the garden.

#2 The Best Bed and Breakfasts in Philadelphia