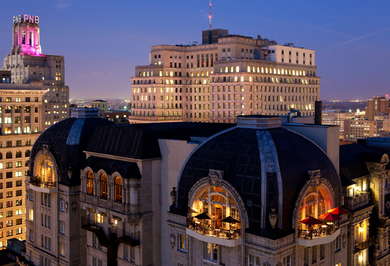 As Philadelphia’s only hotel on the National Register of Historic Places and the oldest hotel in the city, the Bellevue Hotel has been a Philadelphia institution for almost a century. The rooms are surprisingly small, but have high ceilings and moldings typical of older buildings. The suites, updated in 2016, juggle the building's Beaux-Arts heritage with contemporary touches. The posh restaurant, XIX (Nineteen), features excellent food and stunning views of the city from its 19th-floor perch; some outdoor seating is available. Topped by a 30-foot stained-glass dome, XIX is also great for tea and cocktails. The hotel's lower floors feature a food court, The Palm restaurant, and high-end stores like Tiffany and Teuscher of Switzerland. The lobby is stunning with 76 mycelium marble columns. There are bas-relief gold leaf cupids and floral designs from the Beaux Arts era decorating the tops of the columns and moldings. Seven crystal chandeliers line the entire lobby with two in the check-in area. The Ballroom has a working Edison era light system and even more chandeliers. A few blocks away from City Hall, The Bellevue is within walking distance of most attractions.

Standard rooms are quite basic, there are no blackout curtains just plantation shutters, there are two chairs a tale and a king size bed with 350 thread count. THere is a flat screen TV with cable and a Keurig coffee maker with Starbucks for the mornings. 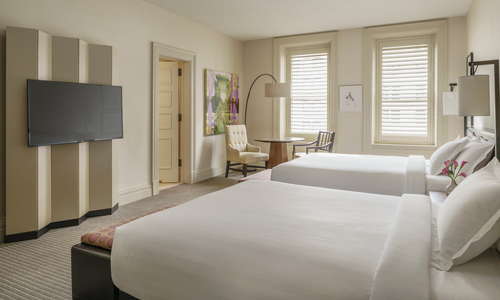 Bathrooms have a large glass walk-in shower and/or standard tub and carry British brand Guild and Pepper bath products whichhave a more masculine scent in warm oak as opposed to hotel product's more feminine standard scents, but it is technically unisex and refreshing and people love the scent. 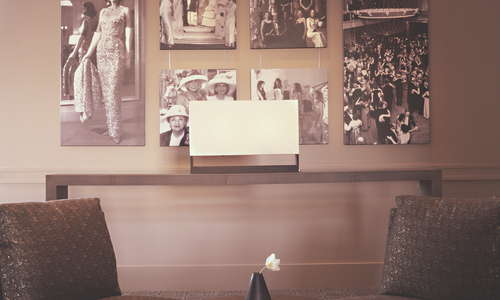 The lobby has three entrances, there are 76 mycelium marble columns from 1904 making a grand base. There are bas-relief gold leaf cupids and floral designs from the Beaux Arts era decorating the tops of the columns and moldings. Seven crystal chandeliers line the entire lobby with two chandeliers in the check-in area.

YOU SHOULD KNOW The building has three entrances and houses four concepts: The Sporting Club, shops, a food court and a Hyatt "Unbound" collection hotel: The Bellevue. Walking in can feel like an urban shopping experience even after you've found check-in. While the hotel is a respite, its being housed in a busy building takes away any whisked away tranquility except for the stunning XIX restaurant, cafe, bar, and ballroom. 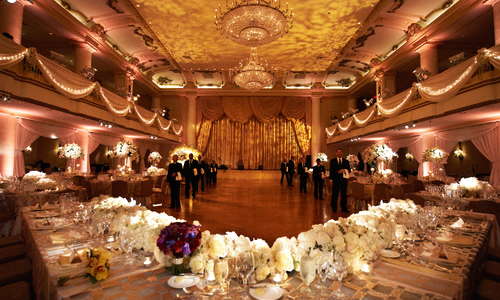 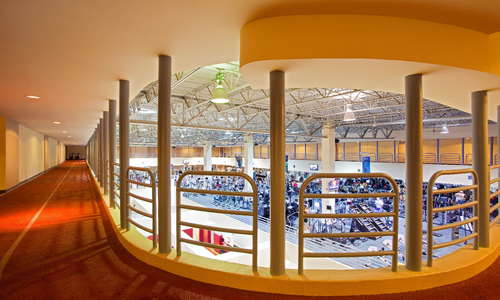 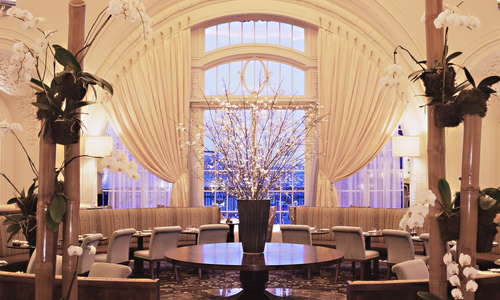 The Sporting Club offers a separate 25-meter pool and spa-style locker rooms. The locker rooms uses its amenities in pumps perhaps in an effort to be green but the amenities are low quality and guests complain about the cleanliness of the locker room and pool.

YOU SHOULD KNOW The pool is indoors in a low ceilinged area. It is in desperate need of a makeover, and fresh cleaning and some feng shui or whites and bright colors to open up the suffocating area. There are hot tubs just before the pool in the women's locker rooms and they are also rarely used, with low ceilings and low lighting and have a similar unclean and claustrophobic feel.

The Sporting Club offers a separate spa and salon downstairs for all sorts of massage, facials and body treatments and is popular with loyal clients who are either members of the club or outside guests. 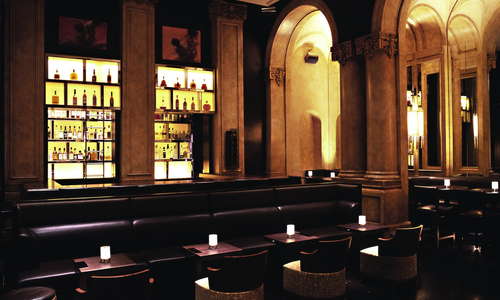 Complimentary access to The Sporting Club. The 93,000-square-foot gym, featuring a running track, squash courts, racquetball courts, and a basketball court, is the East coast's largest fitness facility. The Sporting Club is the largest facility of its kind in the northeast.

YOU SHOULD KNOW Perhaps it's the old building but while the Sporting Club offers 120 monthly fitness classes including spinning, yoga, boxing, Burn the Barre, TRX, Aquatics and more the stuffy rooms, low lighting and aging facilities when compared to a top-notch club like Equinox make the gym a pass (or at least lower your expectations.)

XIX (Nineteen) Restaurant offers an authentic Philadelphian experience capturing the European feel and boldness of “The Grand Dame of Broad Street” while curating a modern interpretation of this city's history through unique local cuisine. XIX also boasts the highest outdoor dining in the city. 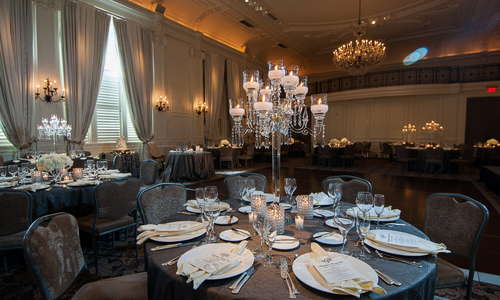 XIX (Nineteen) is a sexy mahogany and leather furnished bar with 19 seats to grab charcuterie and cheeses, or an elaborate seafood tasting. The signature drink is the "Clover Club": blue coat gin, lemon juice, egg white, raspberry syrup which can also be made as a mocktail. It's named after a group of Philadelphia writers who met at the XIX and called themselves the Clover Club, also the name of a bar in Brooklyn named after the same group of scribes. Bartenders are friendly and knowledgeable and outdoor seating around the rotunda with stunning views is a huge draw in suitable weather. 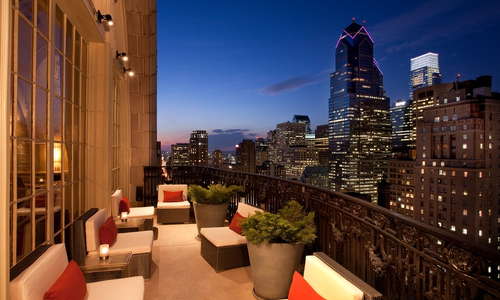 The Bellevue Hotel is on the corner of Broad Street and Locust Street, with convenient access to the SEPTA Broad Street line or Number 4 bus which brings you to many point in the city, including Lincoln Financial Field. The SEPTA Market-Frankfort Line is just one block away. It's a 15-minute drive from Philadelphia International Airport and nine minutes from the 30th Street Amtrak station.

Misconduct Tavern (4-minute walk) is a popular mid-scale sports bar for the die-hards.

It's an all in one for Philadelphia, you can't beat the location right on the Avenue of the Arts for your cultural experiences. The history, the architecture, from the Edison era working light system of the many chandeliered ballroom and XIX dining room with 2848 pearls hanging from the oculus are all Philadelphia icons to be seen. Topped by a 30-foot stained-glass dome, XIX is also great for tea and cocktails with stunning views. The hotel's lower floors feature a food court, The Palm restaurant, and high-end stores like Tiffany and Teuscher of Switzerland and the Sporting Club at the Bellevue is on the third floor, so it's a four-for. 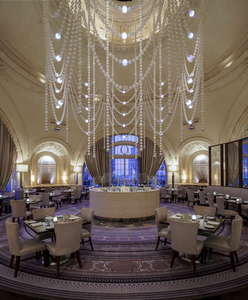 #4 The Best Luxury Hotels in Philadelphia

Hyatt Philadelphia at The Bellevue 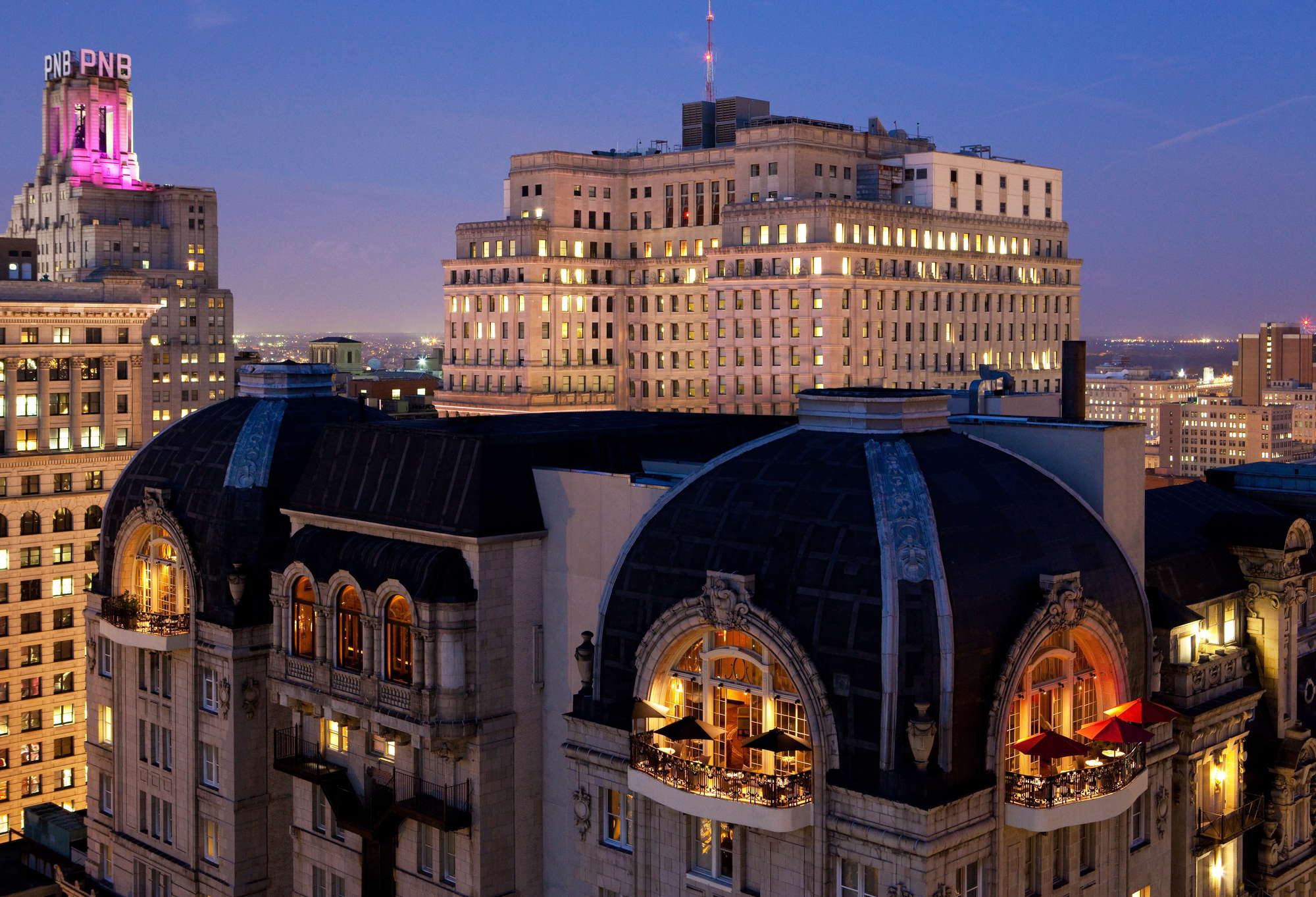 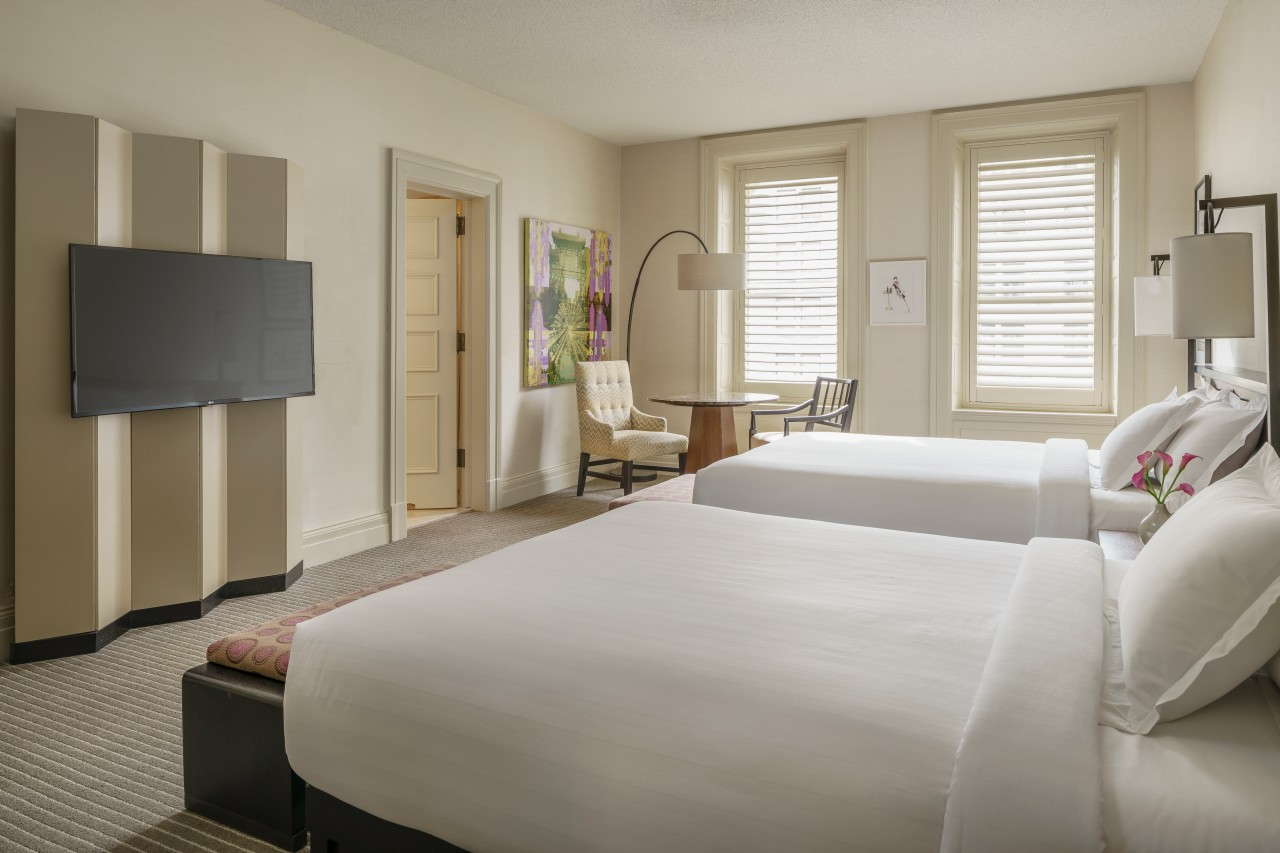 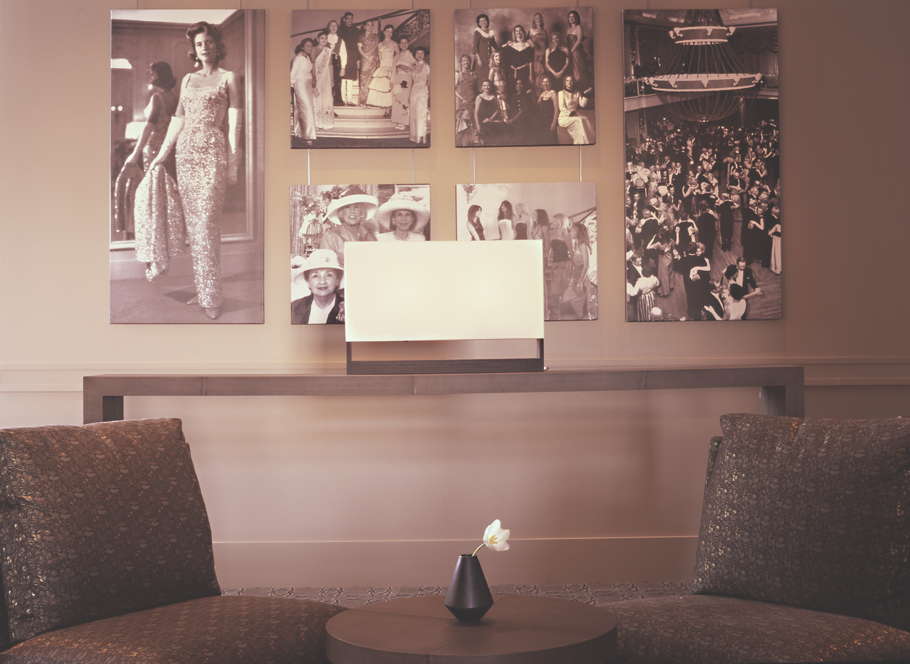 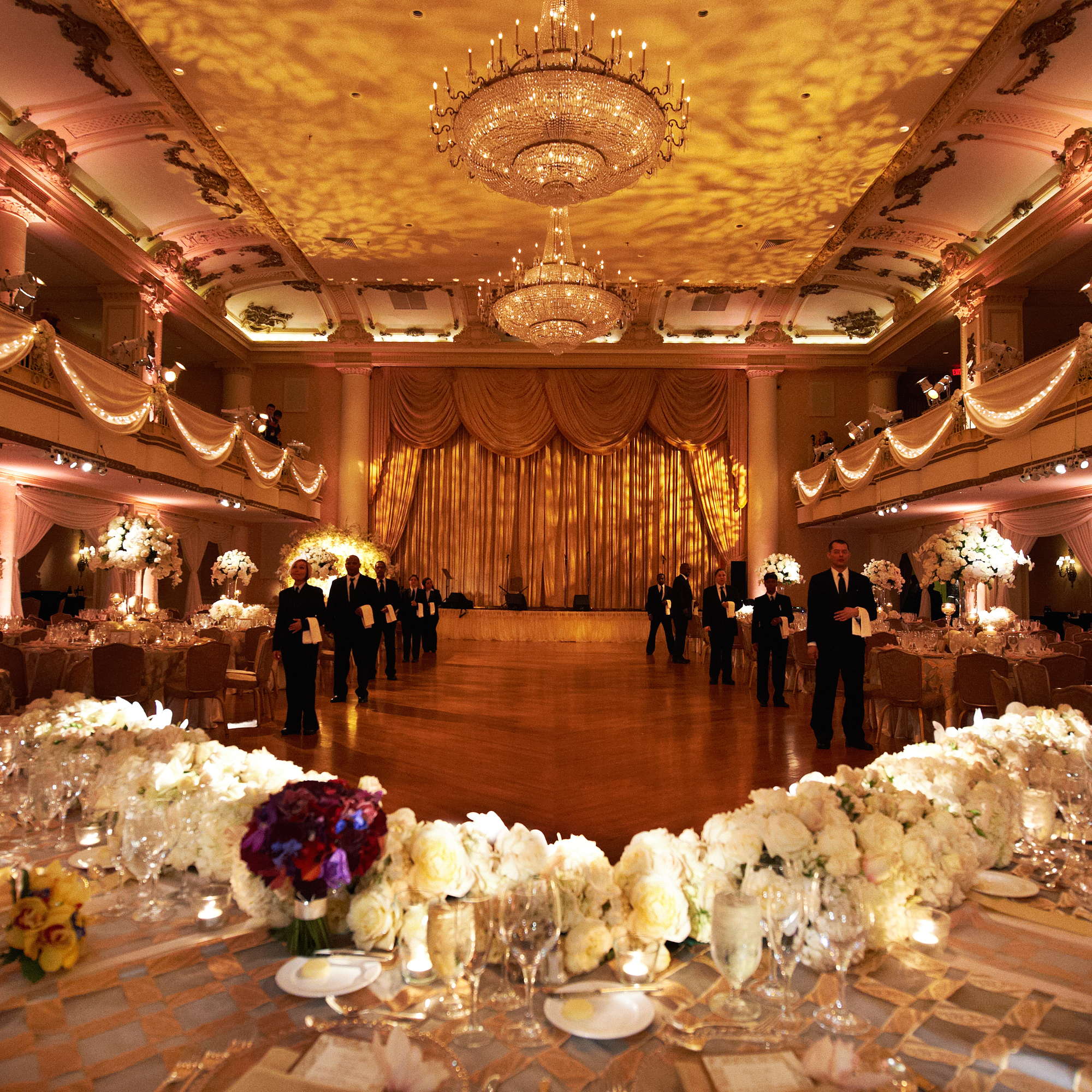 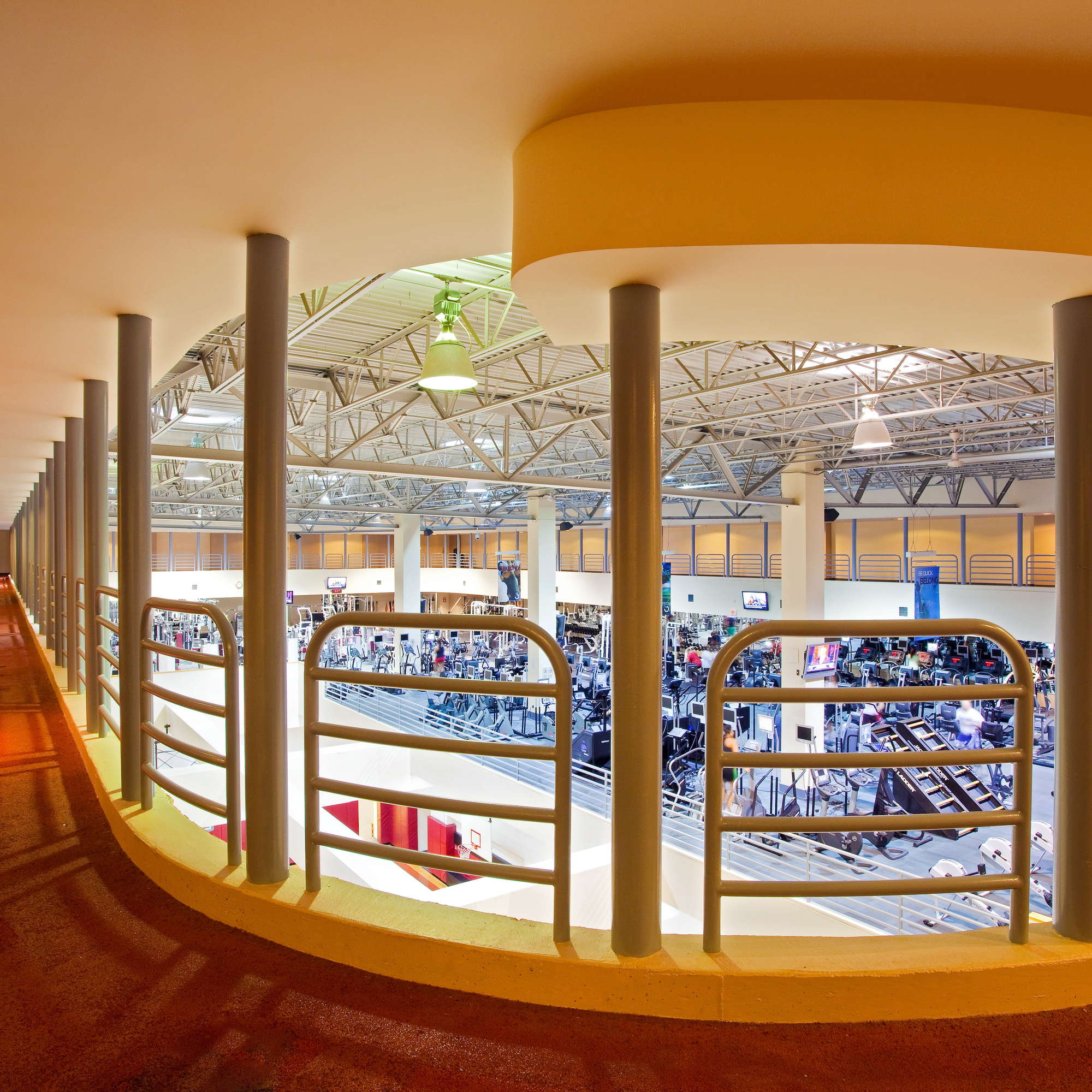 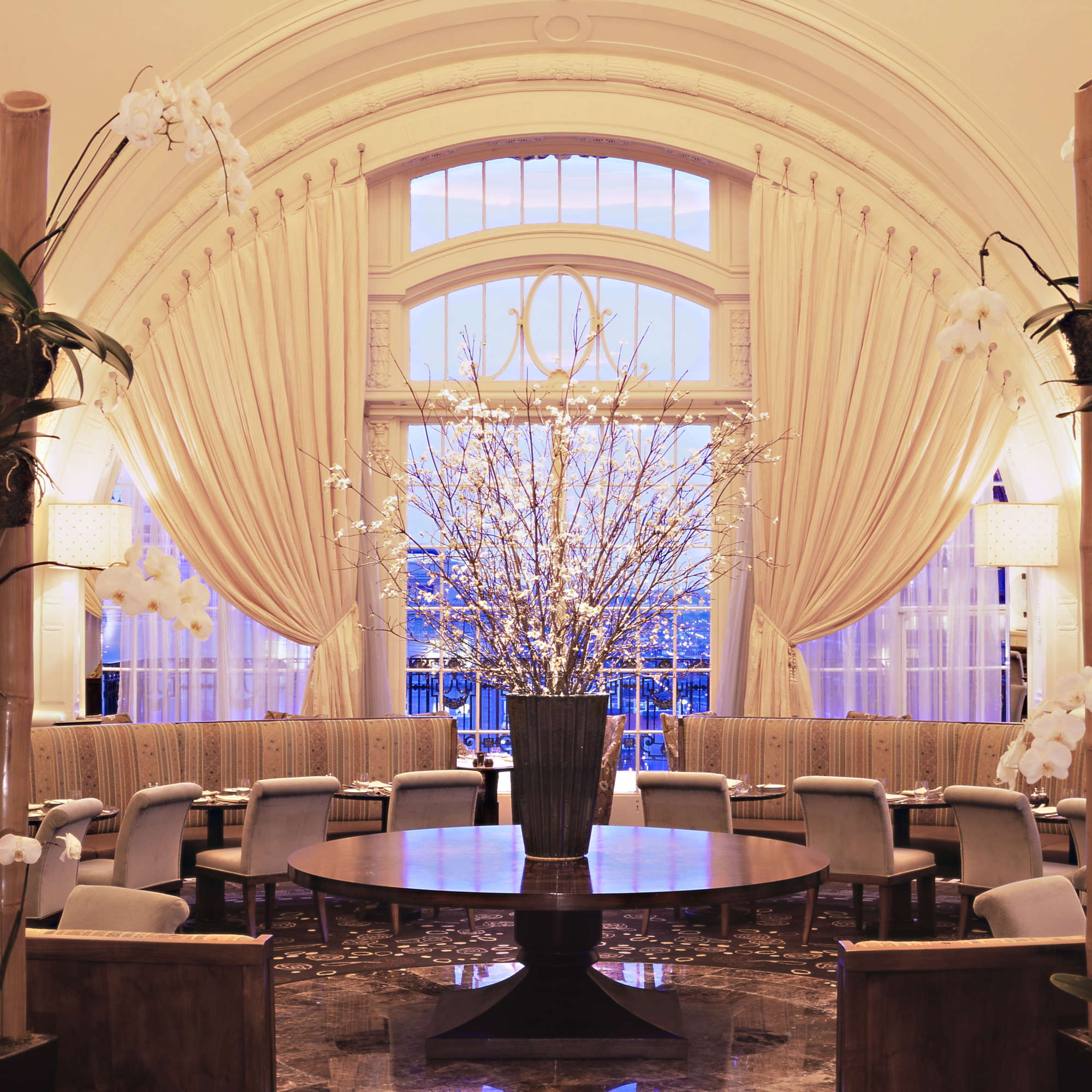 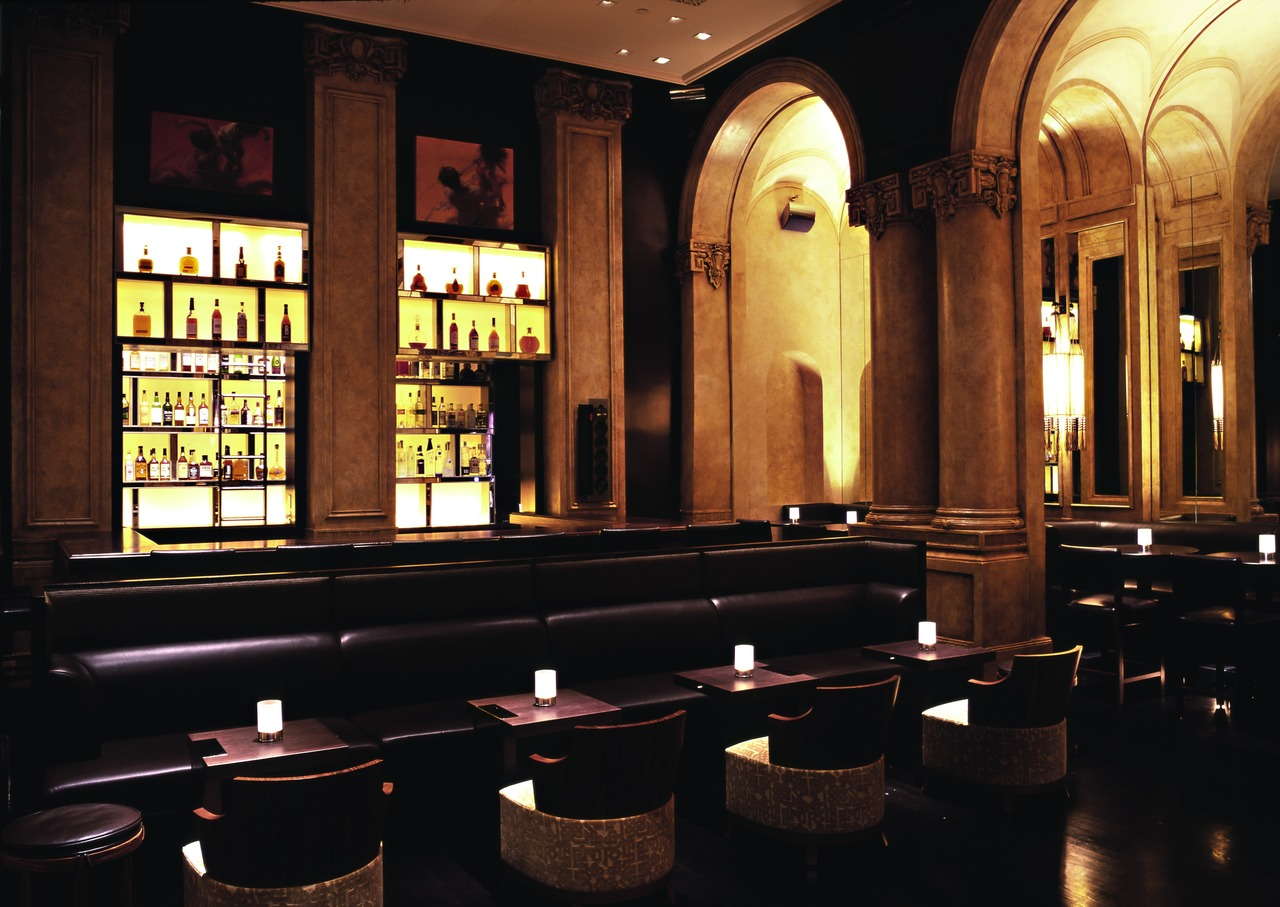 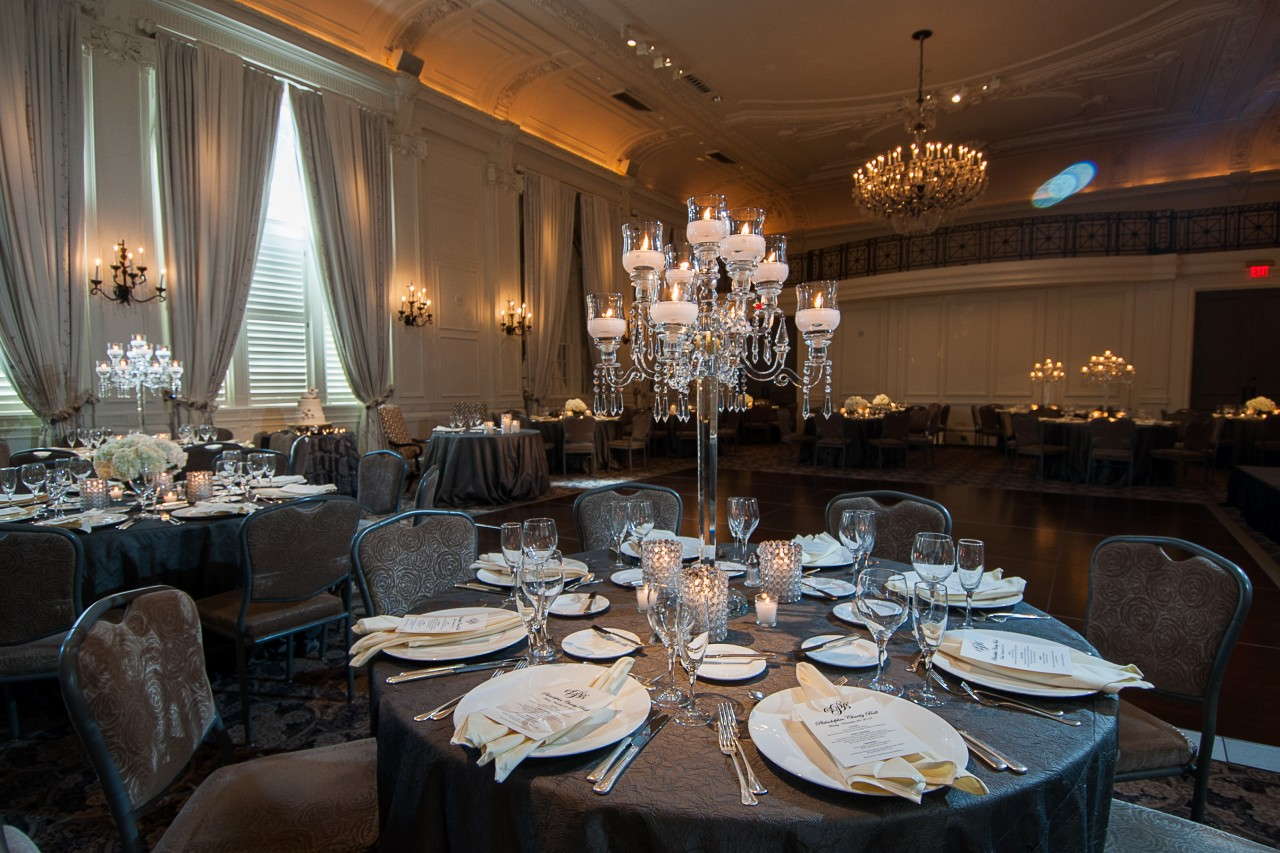 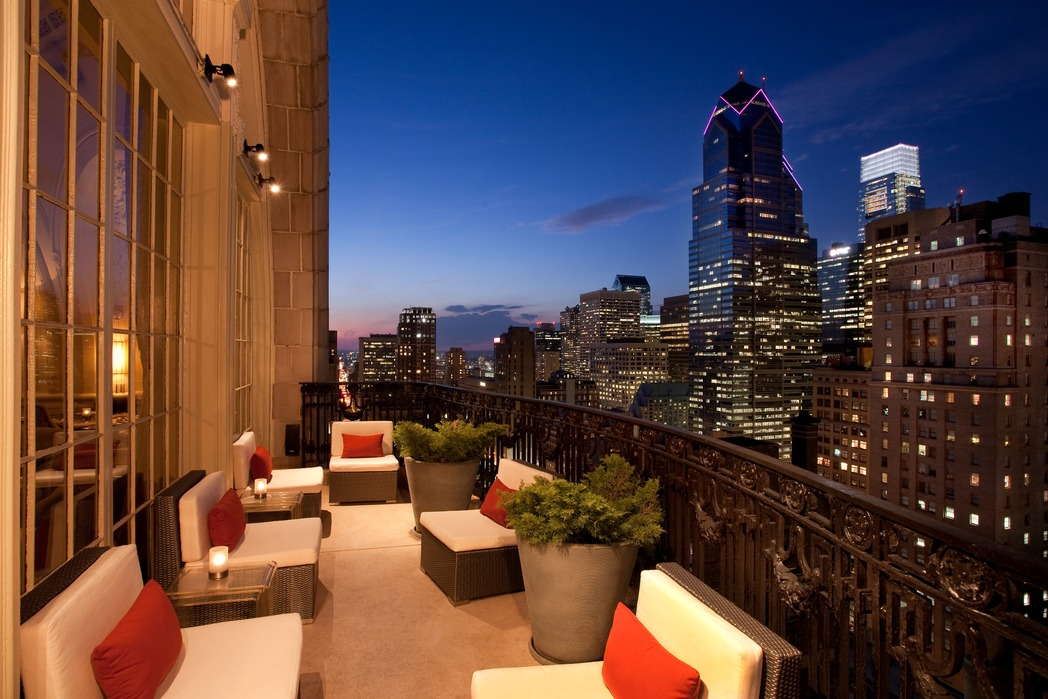