Why you should visit Durham, North Carolina for spring festival season.

Asheville, North Carolina, or Athens, Georgia, are the cities that usually first come to mind when people talk about what’s “cool” in the South (and for good reason), but with its new boutique hotels, inventive restaurants, and internationally known music and film festivals, Durham, North Carolina, is now claiming a prominent spot on that list.

Spring is the season of rebirth and new beginnings. We shake off the winter doldrums, pack away our puffer coats, and clean the dust bunnies from under the beds. Along with the usual heralds of the season—the first flowers poking up through the mud, a haze of green appearing on the trees—in many parts of the country, the most anticipated harbingers of the new season are music, film, and art festivals. There are the big ones, like Coachella, Jazz Fest, and the Tribeca Film Festival, as well as lesser-known events on the rise in cities where you might not expect to find world-class cultural festivals. And to cater to the increasing numbers of discerning visitors to Durham, local restaurants and hotels have upped their game.

April is a banner month in Durham. The city is in full spring bloom, warm but not yet wilting under summer’s oppressive heat and humidity. The weather alone would make it worth a weekend visit, but April also hosts the two biggest festivals of the year, which draw thousands of music, art, and film aficionados from around the world.

The weather alone would make it worth a weekend visit, but April also hosts the two biggest festivals of the year, which draw thousands of music, art, and film aficionados from around the world.

The month kicks off with the Full Frame Documentary Festival, now in its 22nd year and widely recognized as the premier showcase for nonfiction film. Last year’s festival saw screenings of acclaimed blockbusters such as Won’t You Be My Neighbor and RBG, along with more than 20 North American or world premieres of documentaries addressing such topics as immigration, poverty, environmental issues, and the 2016 election, as well as biographies of such cultural icons as Hal Ashby and Jean-Michel Basquiat. Screenings, lectures, and panel discussions (free and ticketed) are held at various locations downtown as well as on the Duke University campus (the festival is a program of Duke’s Center for Documentary Studies). Passes go on sale in the middle of February and usually sell out shortly after the official lineup is announced in mid-March. 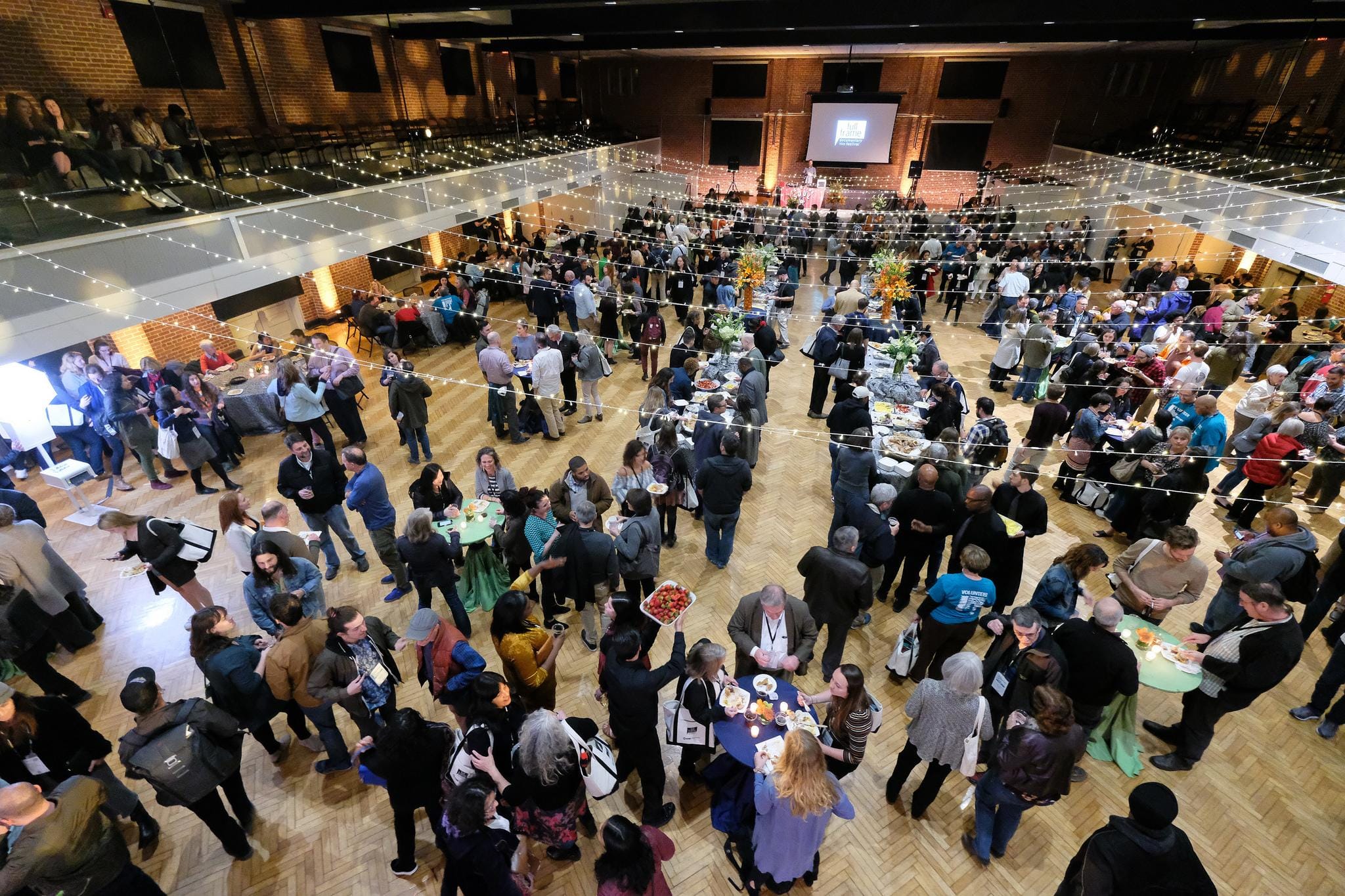 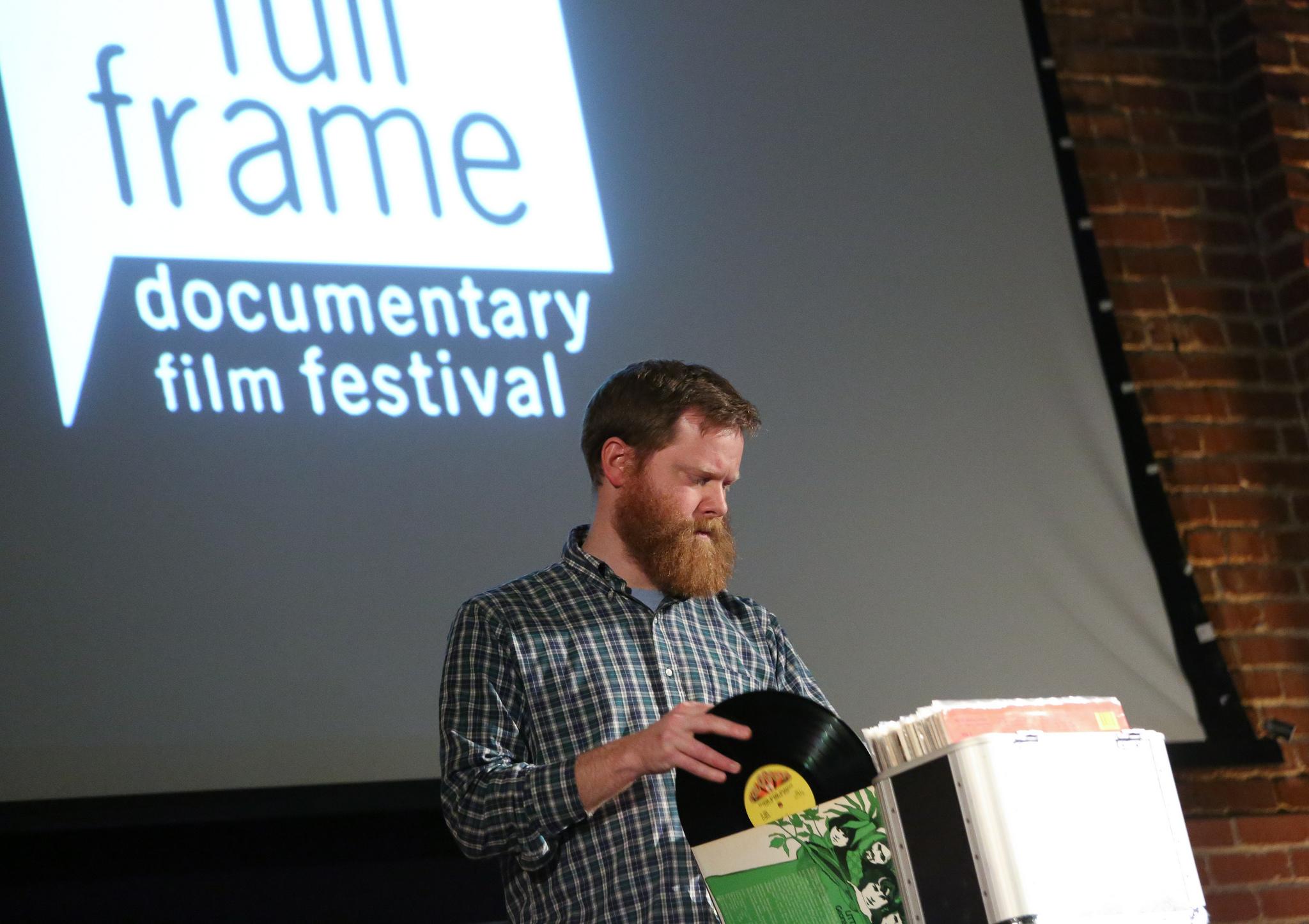 For people with an eye toward avant-garde music and performance technology, Moogfest takes over downtown Durham later in the month. The festival, started in honor of Robert Moog, who pioneered electronic music with his groundbreaking analog synthesizers in the 1960s, originated as a one-day annual celebration in New York City in 2004. In 2010, it moved to Asheville, North Carolina (where Moog synthesizers are still manufactured) and expanded to a weekend-long event. In 2016, Moogfest relocated to Durham as a nod to the area’s deep musical roots (the Merge and Yep Roc music labels are based in the nearby towns of Carrboro and Hillsborough) as well as the booming tech culture of Research Triangle Park. The four-day event takes advantage of downtown Durham’s diverse performance venues (most within a few minutes’ stroll of each other), from the tiny Pinhook (known for hosting cutting-edge music throughout the year) and Motorco to the more elegant and spacious Durham Armory and Carolina Theatre. Lectures, panel discussions, and screenings accompany performances throughout the festival. 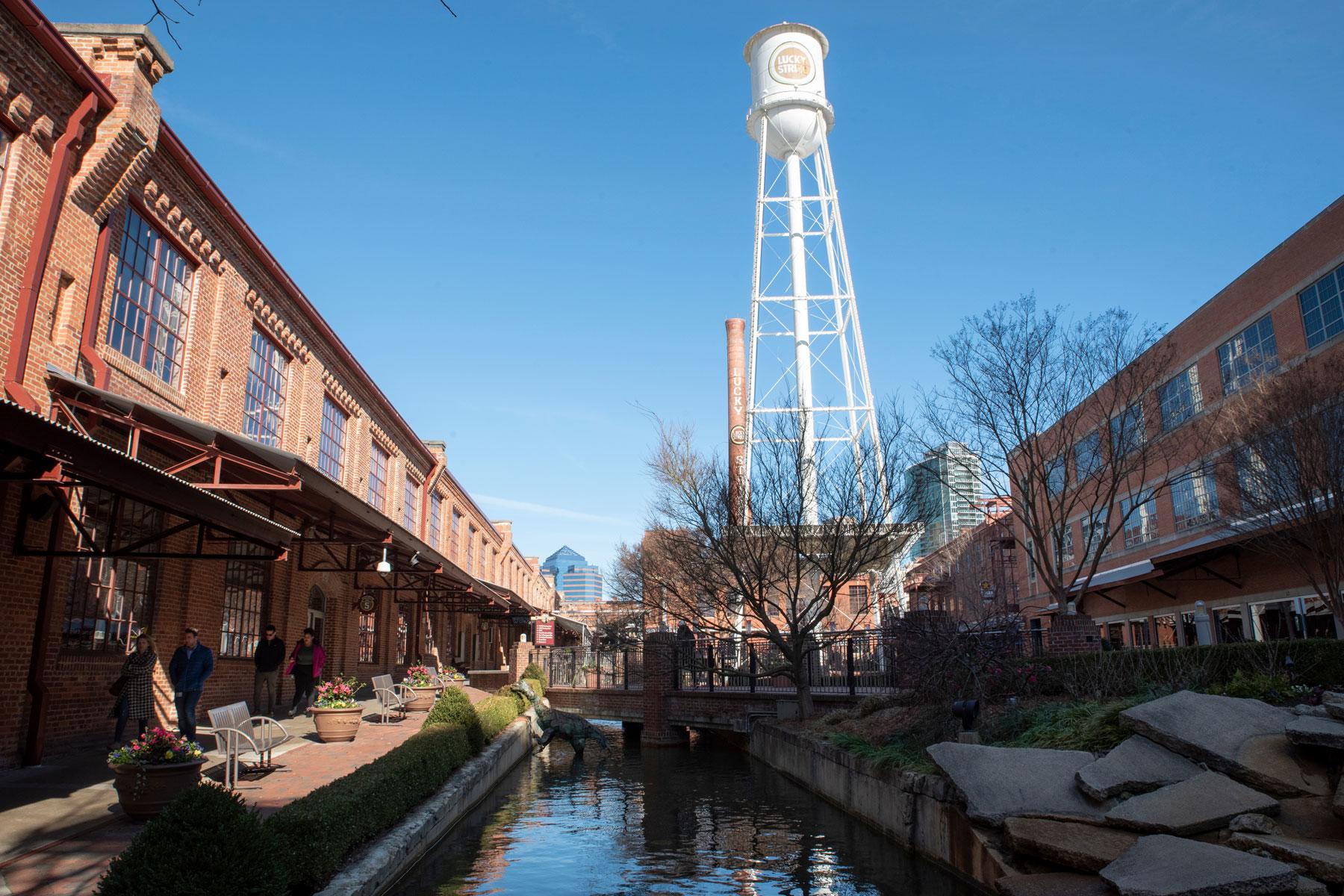 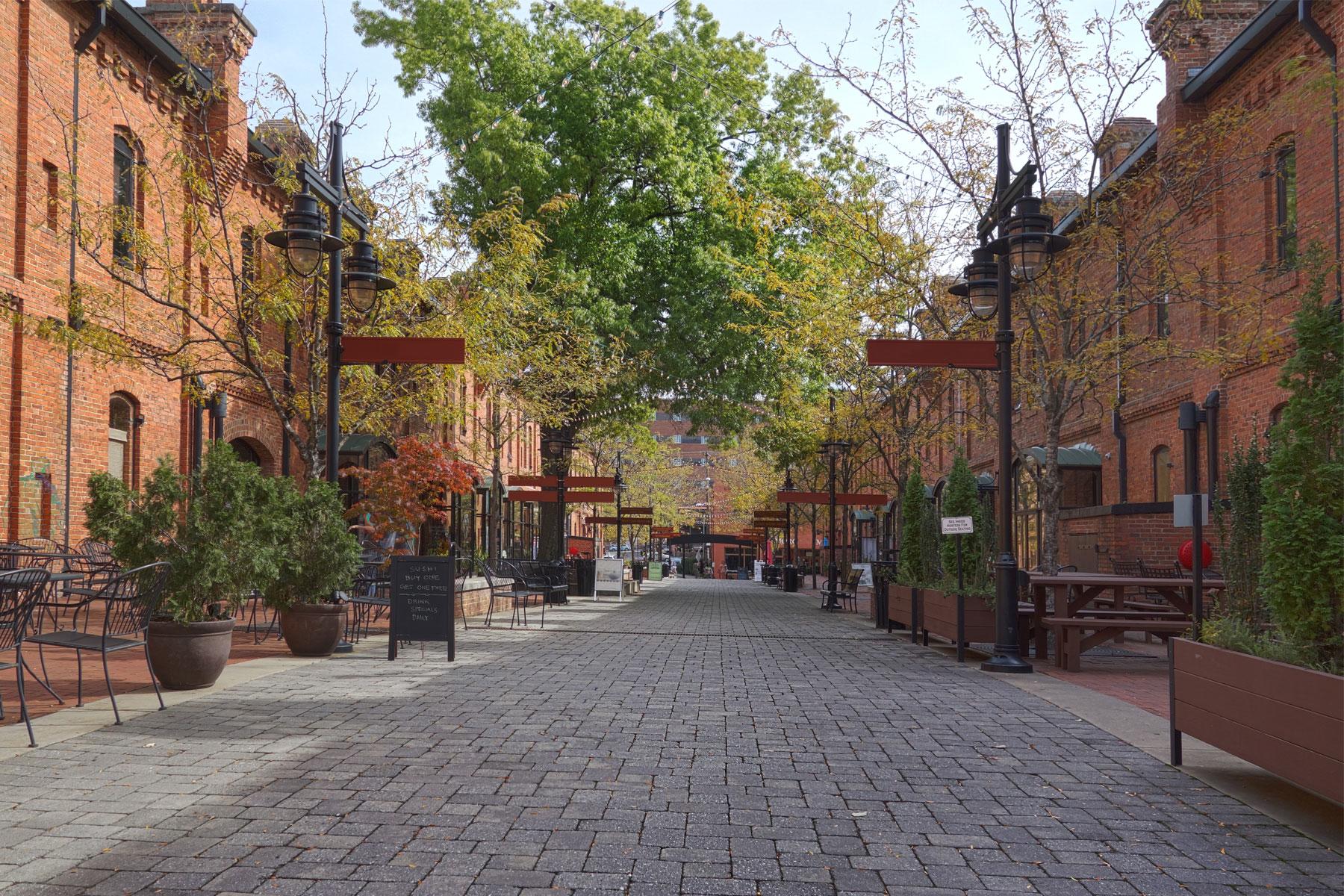 Sophisticated and creative restaurants have been on the rise in smaller cities around the country, and Durham is no exception. Downtown has become a United Nations of excellent restaurants, from the farm-to-table Copa (Cuban); to M Sushi and M Tempura (Japanese); Viceroy (Indian with a British twist); Mothers & Sons (Italian); Lucky’s Delicatessen (for homesick New Yorkers); Rue Cler (French); and Maeto (tapas). Seafood lovers will delight in the raw bar over at St. James, and oenophiles will be right at home in Bar Brunello. Late-night eats are thin on the ground in Durham, unfortunately (but we’ll always have Waffle House!), but you can grab a hearty snack until midnight (on weekends) at upscale diner Jack Tar and the Colonel’s Daughter. Keep in mind, reservations at all downtown restaurants are essential on weekends.

The suburban sprawl that has accompanied the rapid growth in the Triangle area has ensured no shortage of the usual chain hotels and restaurants along the state highways leading out of town, but if you’re coming in for a downtown festival, it makes sense to stay within a few blocks of your venues. Luckily, over the past few years, Durham has added stylish and reasonably priced accommodations to the city center that match its artistic spirit. 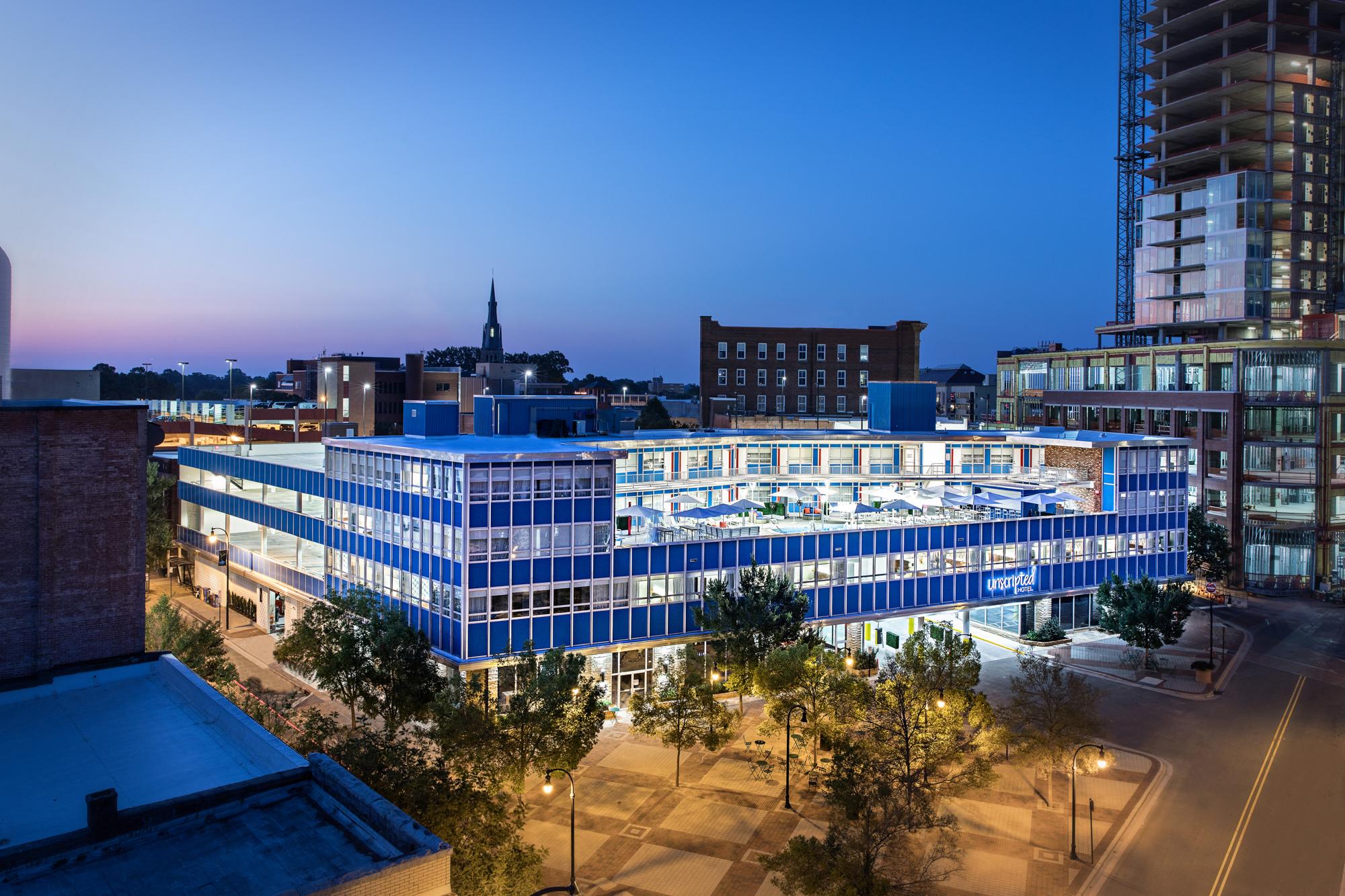 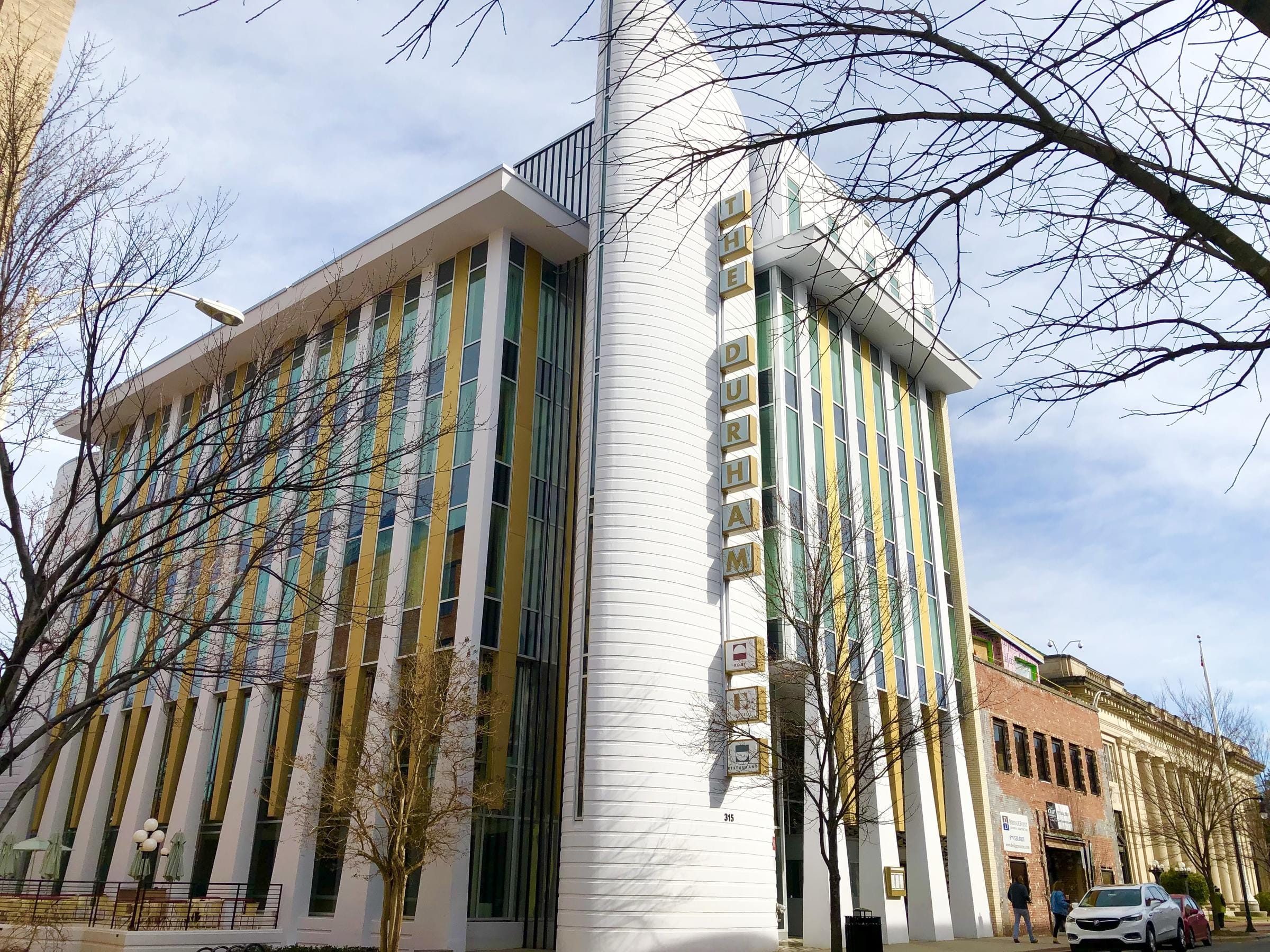 The midcentury modern Durham Hotel features 53 sleek rooms as well as an expansive rooftop restaurant and bar with 360-degree views of the city. Its lobby also plays host to several lectures and panel discussions throughout the April festivals.

Around the corner, Unscripted is Durham’s newest hotel, having opened in 2017. The hotel continues the midcentury vibe in a converted motel updated with a coffee shop and bar on the lobby level, a rooftop pool and bar (open to the public if you can’t score a room), and minimalist-chic guest rooms with Jonathan Adler design touches.

Across the street is the 21c Museum Hotel, occupying an Art Deco bank building designed by Shreve, Lamb & Harmon, most famously known as the architects of the Empire State Building. As with the other downtown boutique properties, the 21c features public spaces worth a visit, most notably three floors of gallery spaces with rotating exhibitions of contemporary paintings, photography, and sculptures. Better still, the galleries are open 24 hours, if you need a wee-hours art fix while stumbling home from a Moogfest gig.

Raleigh-Durham International Airport, about 20 minutes’ drive from downtown Durham, is well served by direct flights to most major cities in the U.S. All the major venues for festivals are centered around downtown and within easy walking distance of each other as well as several major hotels. Parking during festivals is a challenge, but taxis and ride-share services are easy and affordable options for venturing farther afield.