You can pay to stay at this kitschy Indianapolis landmark, but do you really want to?

It’s considered the ugliest house in America by many design and architecture experts, and for $400 a night, you and a dozen or so of your closest friends can experience the unusual rooms, unfortunate decorating choices, and unnerving stains for yourself.

Known somewhat affectionately by the locals as the “Dolphin House” thanks to the massive porpoise sculptures outside, or “that damn Kessler place,” the multimillion-dollar mansion at 4923 Kessler Blvd. is considered a landmark in Indianapolis, but probably not in a way the current owner would like. Bianka Kraush, who helps book the stays for owner Chad Folkening, bristles when the house is described as ugly, referring to it as a home with a “unique layout and story.”

You’d never know the infamy of the home by the Airbnb listing, which circumspectly describes the mansion as “not luxury, but unique.”

There’s definitely an air of mystery surrounding the house. Originally built as a modest three-bedroom ranch home in 1953, former owner Jerry Hostetler bought the surrounding properties and expanded outward and upward. Currently sprawling across nearly 30,000 square feet, the 11-bedroom, 8-bath mansion features an 80,000-gallon outdoor swimming pool, at least five fireplaces, multiple-story decks, a game room, massive kitchen, hot tub, and enough parking for a band and crew. (One-hit wonders the Baja Men stayed at the home while on a Midwest tour a number of years ago.) 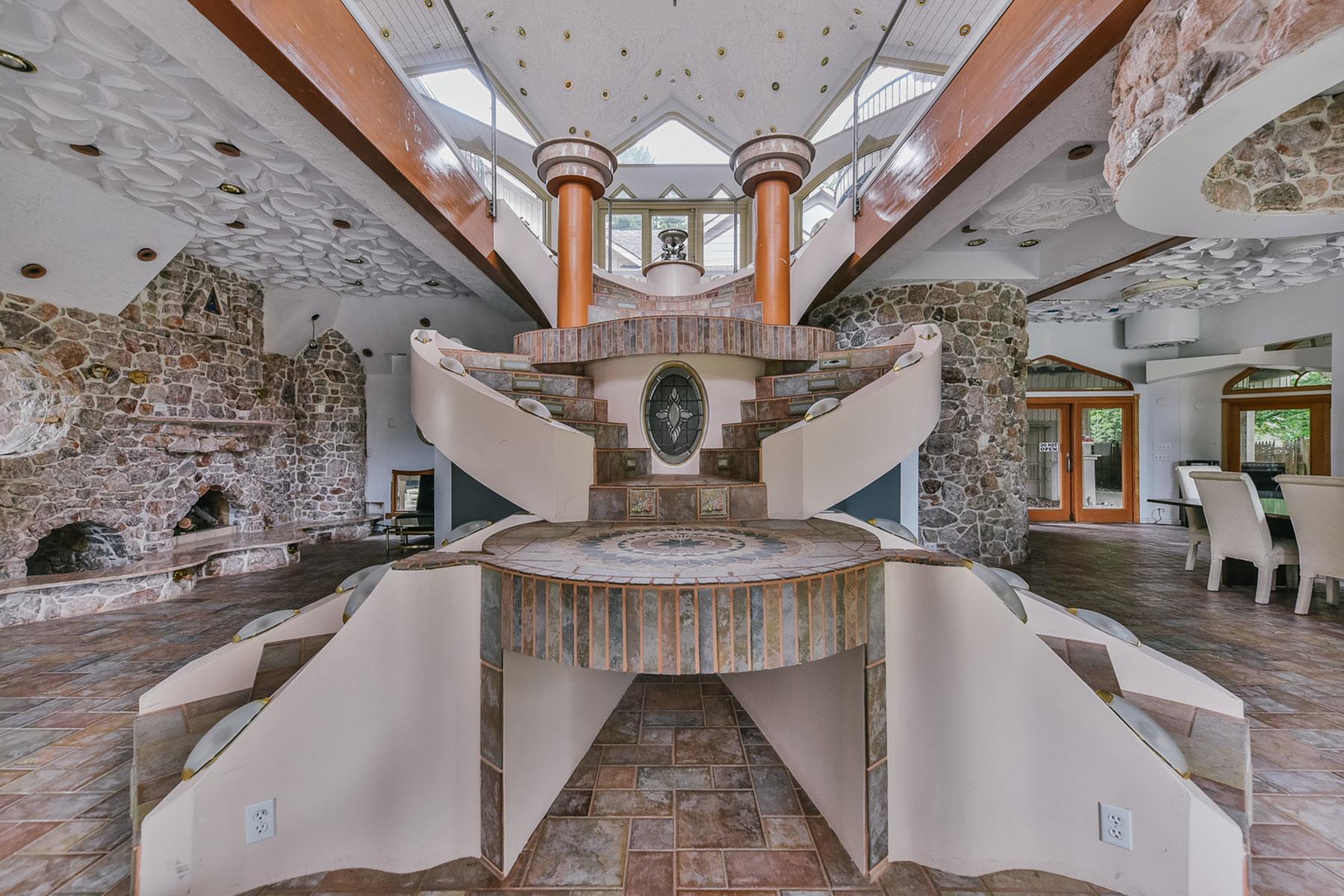 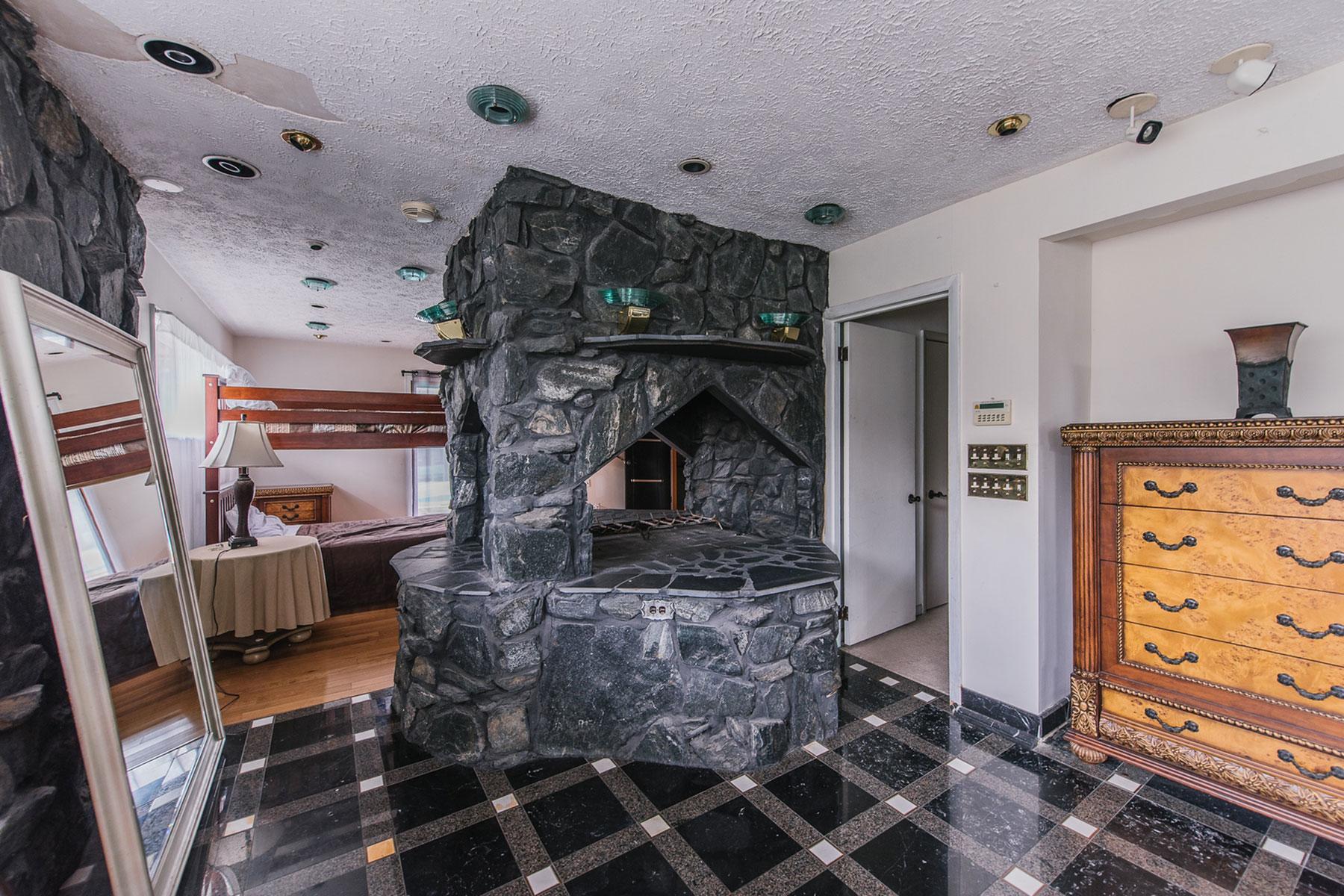 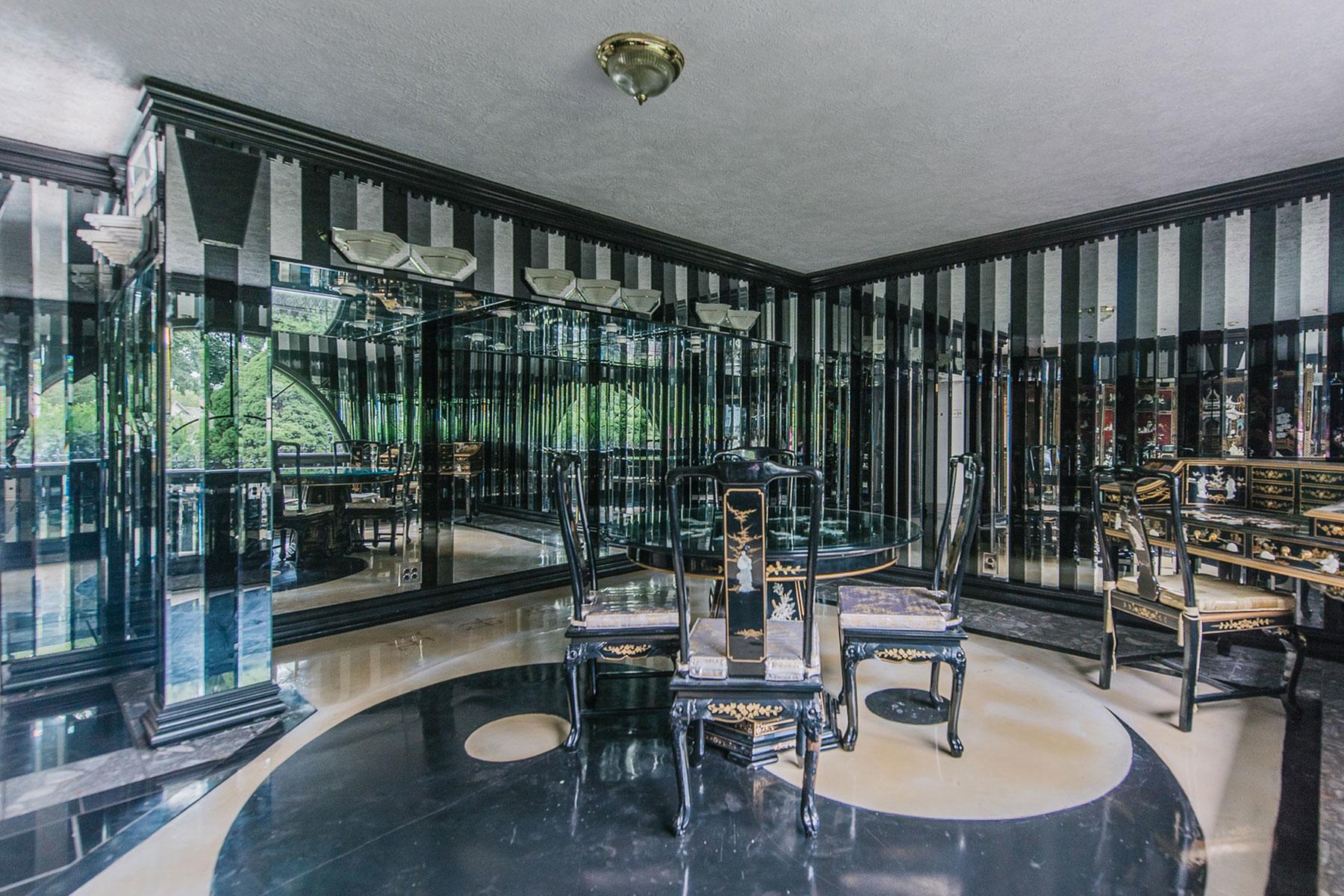 The flamboyant Hostetler got his start as a pimp before entering the more morally dubious world of construction. Given that his nickname was Mr. Big, it’s not surprising that understated wasn’t a word in his vocabulary. The Kessler mansion seems to be a testing ground for every one of his more fanciful and gauche ideas.

Hostetler died in 2006, and the foreclosed property was later sold at auction in 2013. The house has been on the market several times since, but sadly, no one has bought it. So Folkening began renting it out on Airbnb, hosting family gatherings, fraternity parties, and lovers of the truly weird.

You’d never know the infamy of the home by the Airbnb listing, which circumspectly describes the mansion as “not luxury, but unique;” the photos purposely avoid the areas rooms of the property. 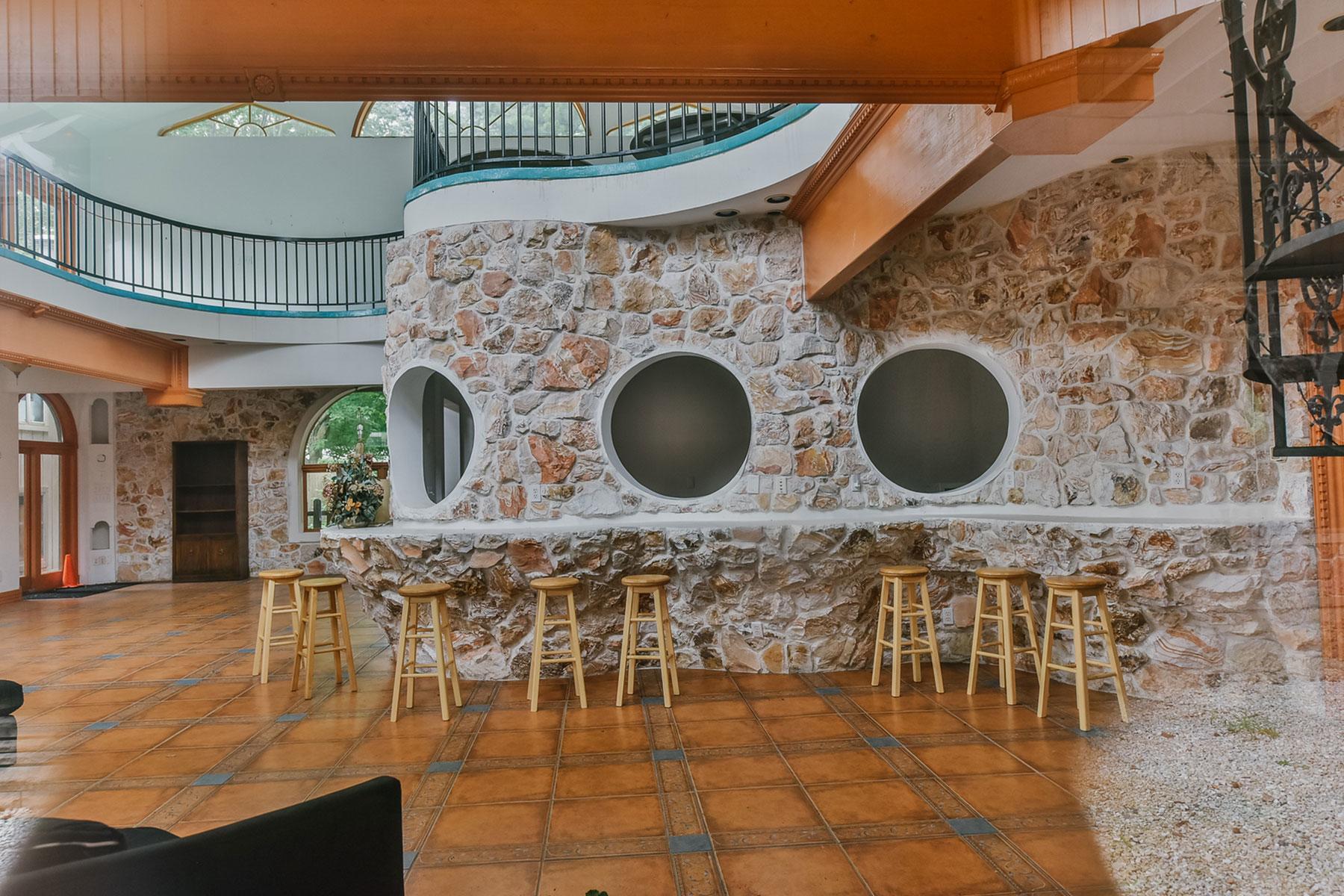 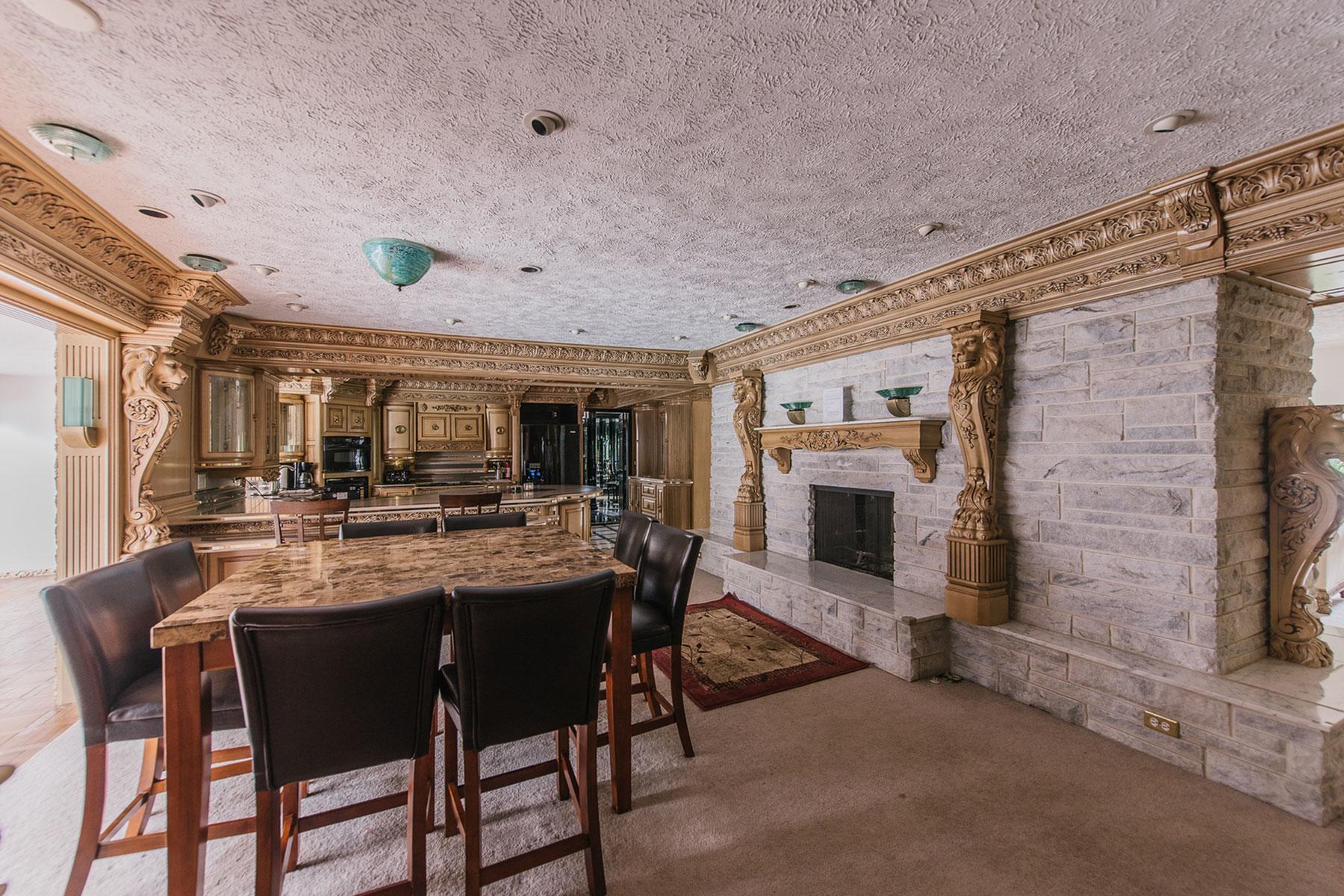 The sensory overload doesn’t stop there. Stone may be the main recurring theme throughout the home; there’s so much exposed rock, you half-expect to find a lost Thai soccer team wandering the halls. The huge kitchen features horrendously lavish cabinets, crown molding, and pillars that would be over-the-top even for Versailles.

Mirror panels surround an Asian-themed dining room, as if Hostetler once ate in a Japanese steakhouse, visited a circus hall of mirrors afterward, and declared, “I want all of it.” Of course there’s a tile yin-yang symbol on the floor.

Perhaps one of the unintended benefits of Hostetler’s bizarre design choices is no guests will ever hog any of the eight bathrooms, particularly the blood-red washroom that looks as if it were painted to cover up a grisly murder scene. 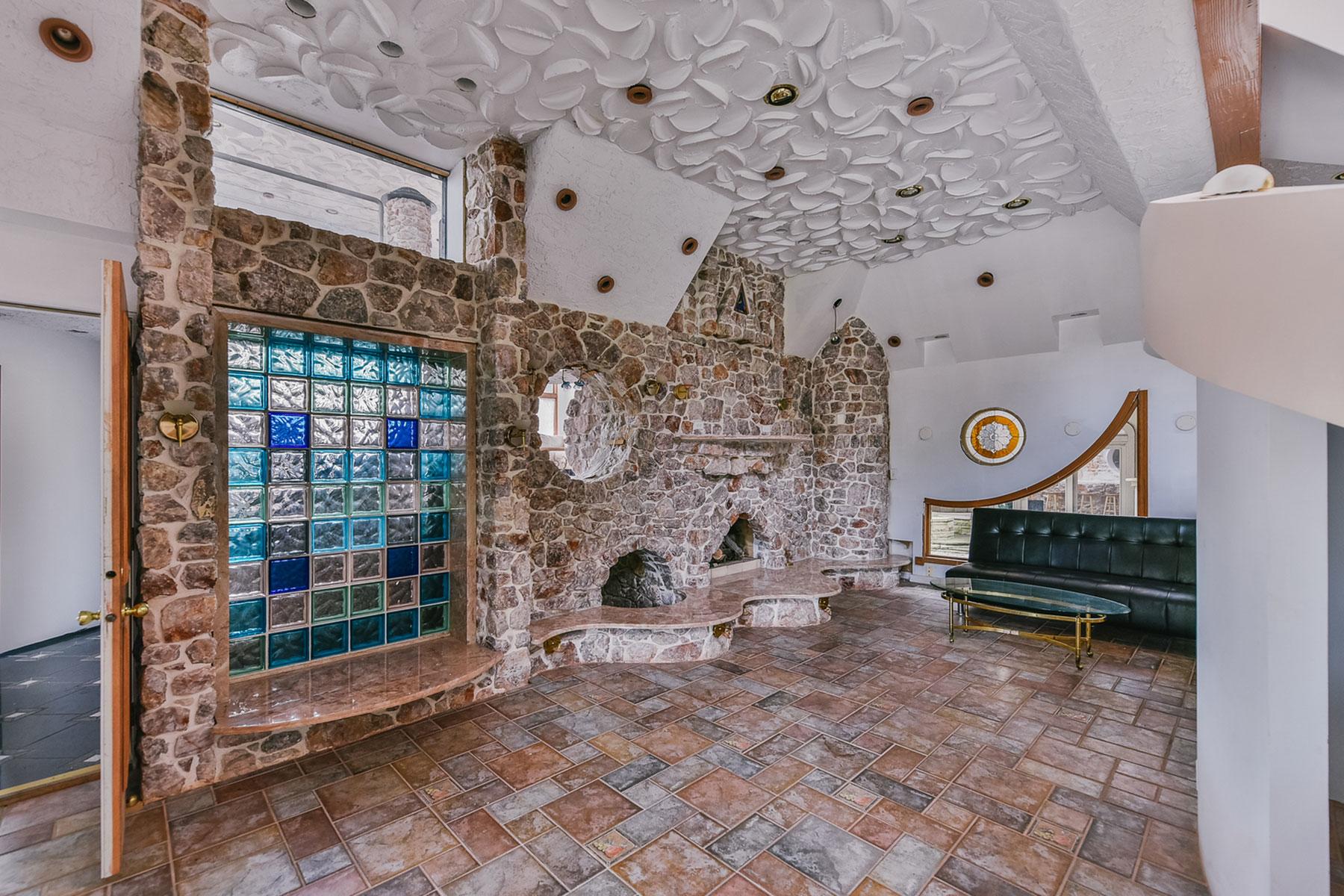 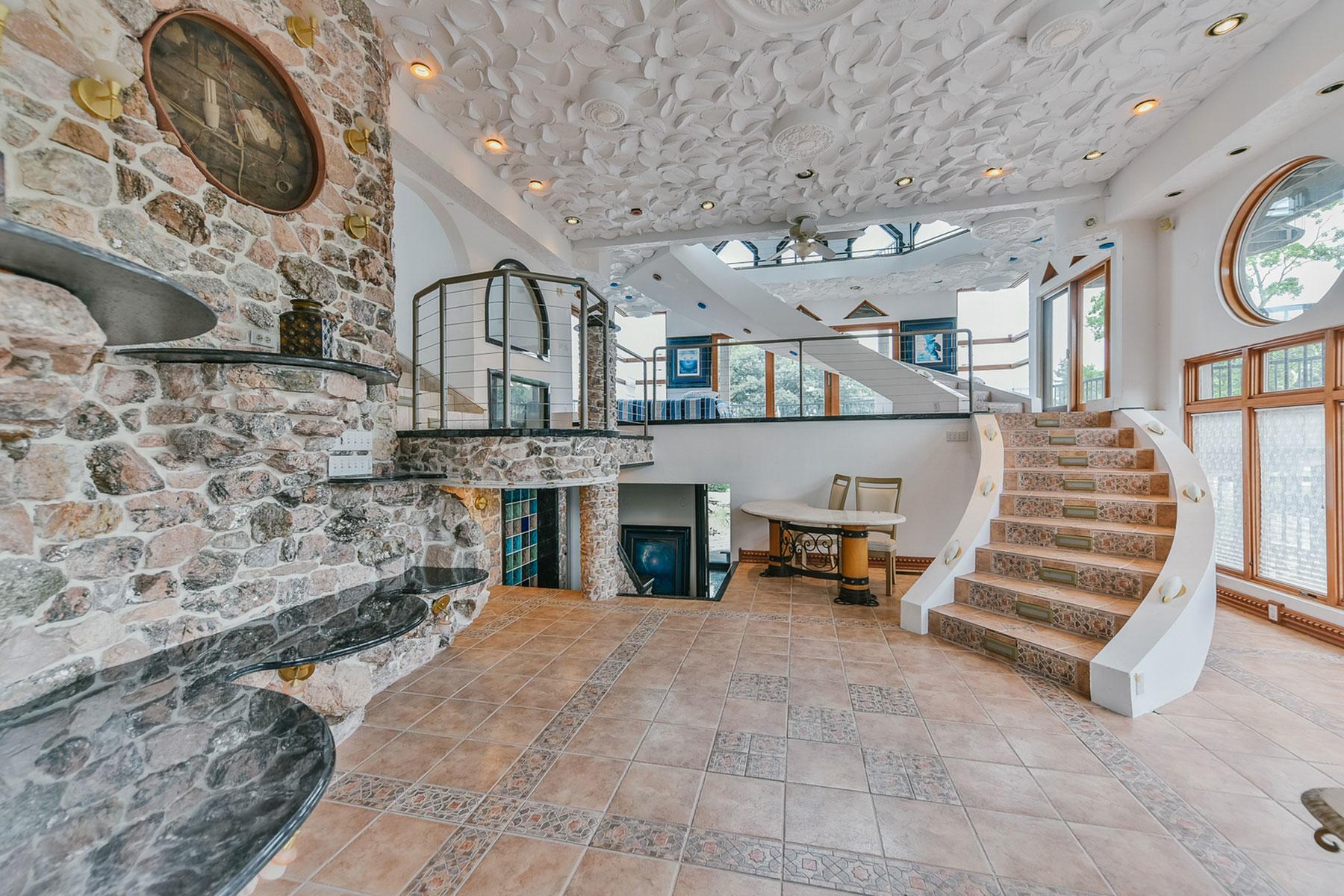 Guests’ Airbnb comments are what you might expect, both good and bad. One user named Alex was excited to spend the night in “a very unique Indianapolis landmark,” and suggested that updating the home would ruin its value as a “famous time capsule.” Another guest named Scott didn’t enjoy his stay nearly as much, complaining about rampant safety hazards, dirty floors, and a “couch so gross nobody wanted to sit on it. … The basement was so scary nobody would go down there. It was dark like a cave.” Miranda, who booked a stay in March 2017, might have summed it up the best, calling it “an old house, showing its age. Think: broken windows, broken games in the game room and showers without hot water. If you’re looking to stay in a house with a story, but sacrifice updates, this is the house for you!”

If you fall in love with the place during your stay, you’re in luck. Folkening has put the house back on the market yet again, this time for $1.2 million.