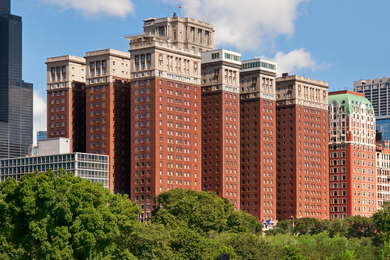 On a busy day the lobby of this Hilton might be mistaken for a terminal at O'Hare Airport. It's a bustling convention hotel, but isn't cookie-cutter at all, retaining its distinguished 1920s heritage in a Renaissance-inspired entrance hall and gold-and-gilt grand ballroom. Renovations completed in 2012 provided new dining and drinking options (thankfully the venerable Kitty O'Shea's bar remains), while renovations completed in 2015 lend a more modern look to 1,000-plus guest rooms. Nearly 200 lucky guests have access to a refreshed executive lounge, serving complimentary breakfast and evening snacks. The 28,000-square-foot gym has enough room for an indoor track and swimming pool.

Despite having 1,000 guest rooms--which, as a result, tends to attract business travelers for on-site meetings--the rooms are not an afterthought at this hotel and have been modernized often. The latest round, in 2015, added crisp white bed linens, photo-inspired prints and a built-in headboard that's smartly designed that includes a nightstand. Pewter-grey accents are a soothing respite from the busy street out front. The hotel's two-level Conrad Hilton Suite has indeed hosted presidents and includes a private helicopter pad.

Traveling with a friend or small kids? The two-bath rooms (with two double beds) are an affordable alternative to suites. 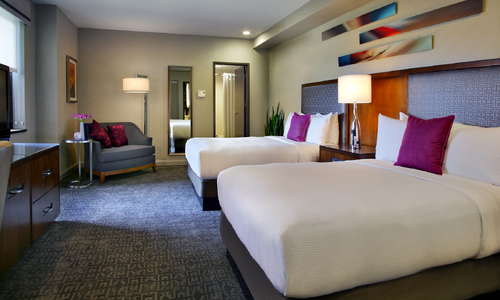 A built-in above the sink crafted from mahogany-hued wood features three floating shelves and a larger-than-normal light-up wall mirror. Walk-in showers are spacious even at the most standard of room levels. 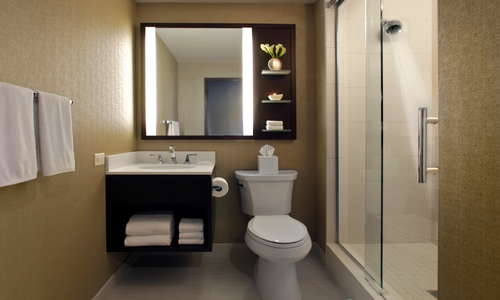 The lobby's royal-blue and gold fabrics are typical for a convention hotel but also manage to be chic and classy. An escalator speaks to the high traffic passing through and yes, it can become congested at times, but if you escape into 720 South Bar, just off the lobby, you can warm up next to a crackling fireplace with a cocktail in hand. 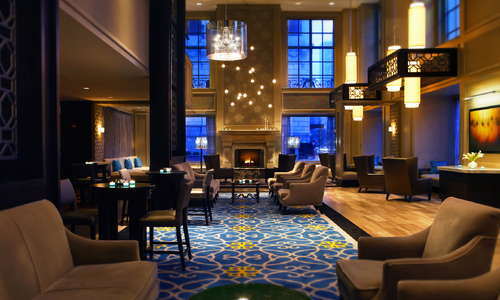 A seasonal sundeck adjacent to the indoor pool contributes to a day-spa-like vibe.

If you're a work-out nut then this is your hotel as the fitness center is among the largest at a downtown-Chicago hotel, clocking in at 28,000 feet, and includes an indoor track.

The wood-paneled, Irish-themed Kitty O'Shea's is practically a Chicago landmark, in the hotel for the last 30 years. The menu includes all-day dining during the week and brunch come weekend. Drinks from one of Chicago's cult coffee roasters, Sparrow Coffee, are also available and live-music acts perform here from time to time. In a rush? Herb N' Kitchen's grab-and-go sandwiches, pastries and salads, plus Starbucks drinks, can be a life-saver. Open only until 2 p.m. daily, 720 South Grill serves breakfast and lunch only.

The breakfast buffet at 720 South won't leave you hungry. 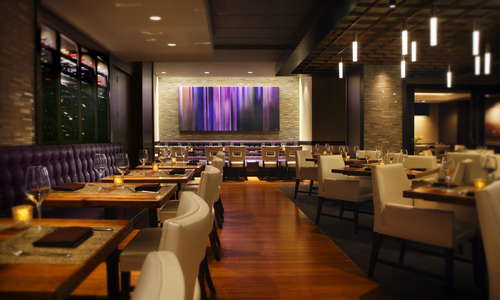 Pints of Guinness are plentiful at Kitty O'Shea's while a mix of creative and classic cocktails can be ordered at 720 South's bar.

Because of this hotel's urban setting in the South Loop, public-transit connections are quite easy, with buses running up and down Michigan Avenue and the Harrison L stop nearby, too. Uber and Lyft drivers are just a few minutes away.

For a taste of Chicago's blues-music scene, which still thrives today, drop by Buddy Guy's Legends (3-minute walk). Jazz Showcase (7-minute walk) is another popular bar with a live-music component.

Despite being part of a brand, you can find good deals at this Hilton due to the high room count and when a meeting is not taking place inside the hotel. Across the street from Lake Michigan and Grant Park, some rooms frame those views beautifully. And there are quite a few luxe amenities available to guests, including the fitness center, pool, decent dining and sun terrace. 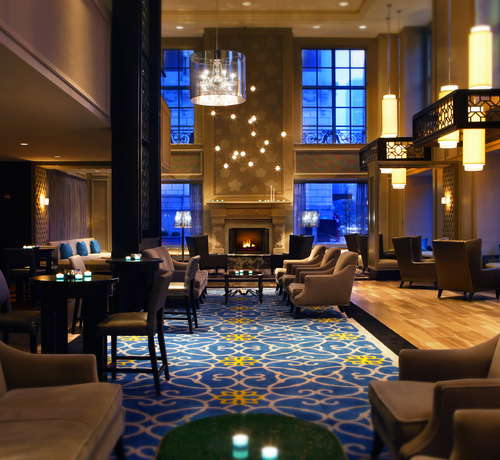 #1 These 5 Hotels Are Near Chicago's Historic Landmarks

#2 The 5 Best Hotels for Sports Fans in Chicago 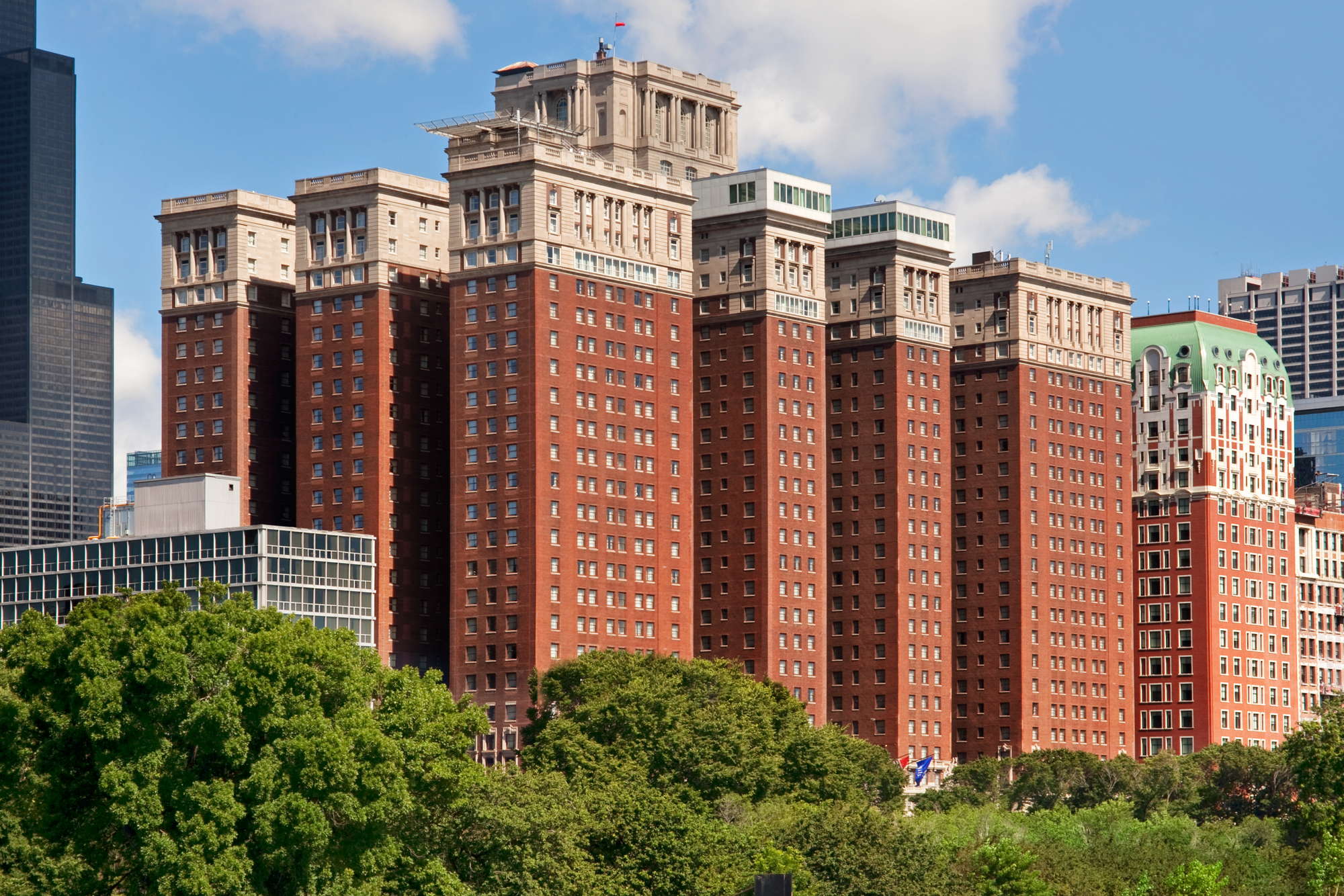 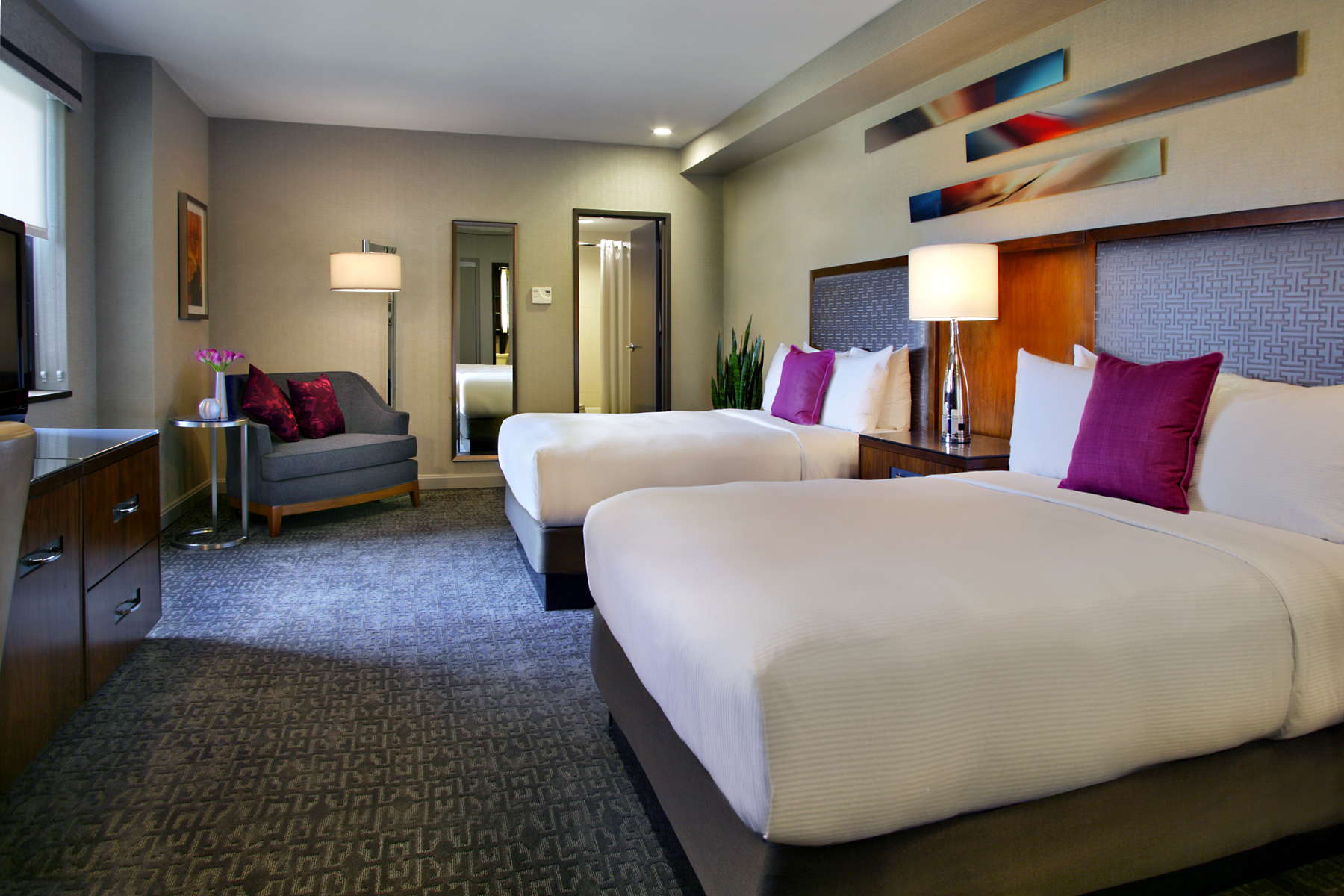 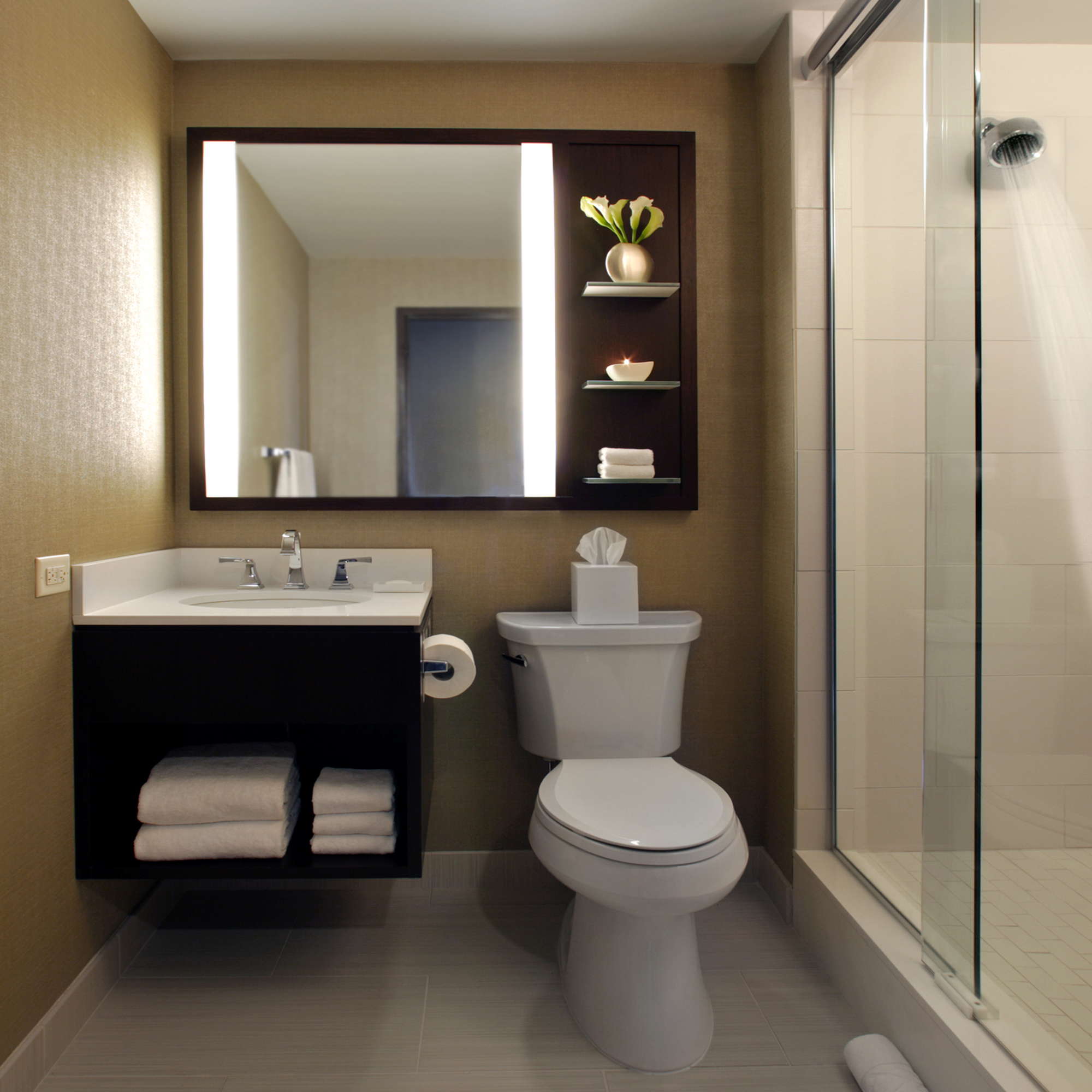 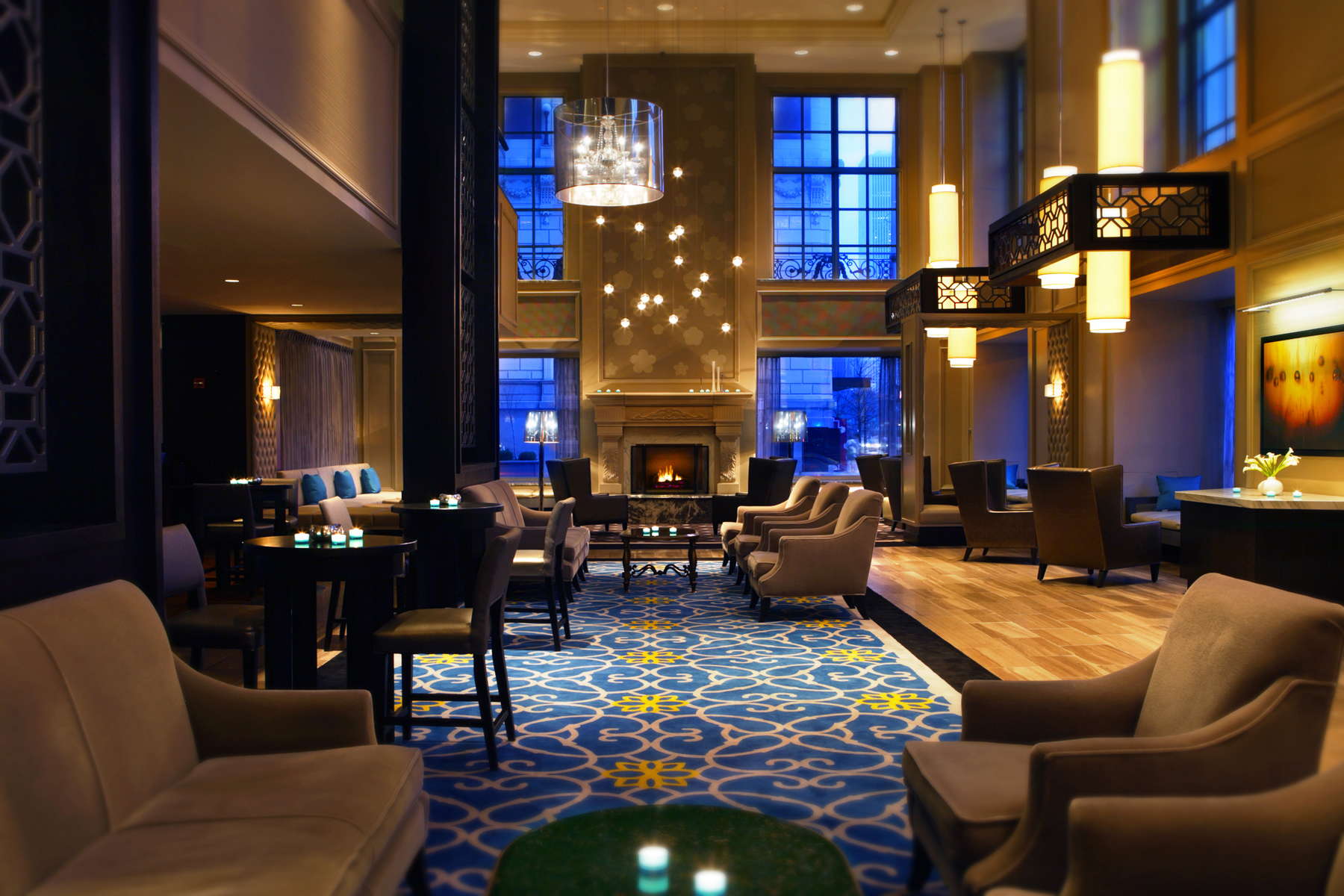 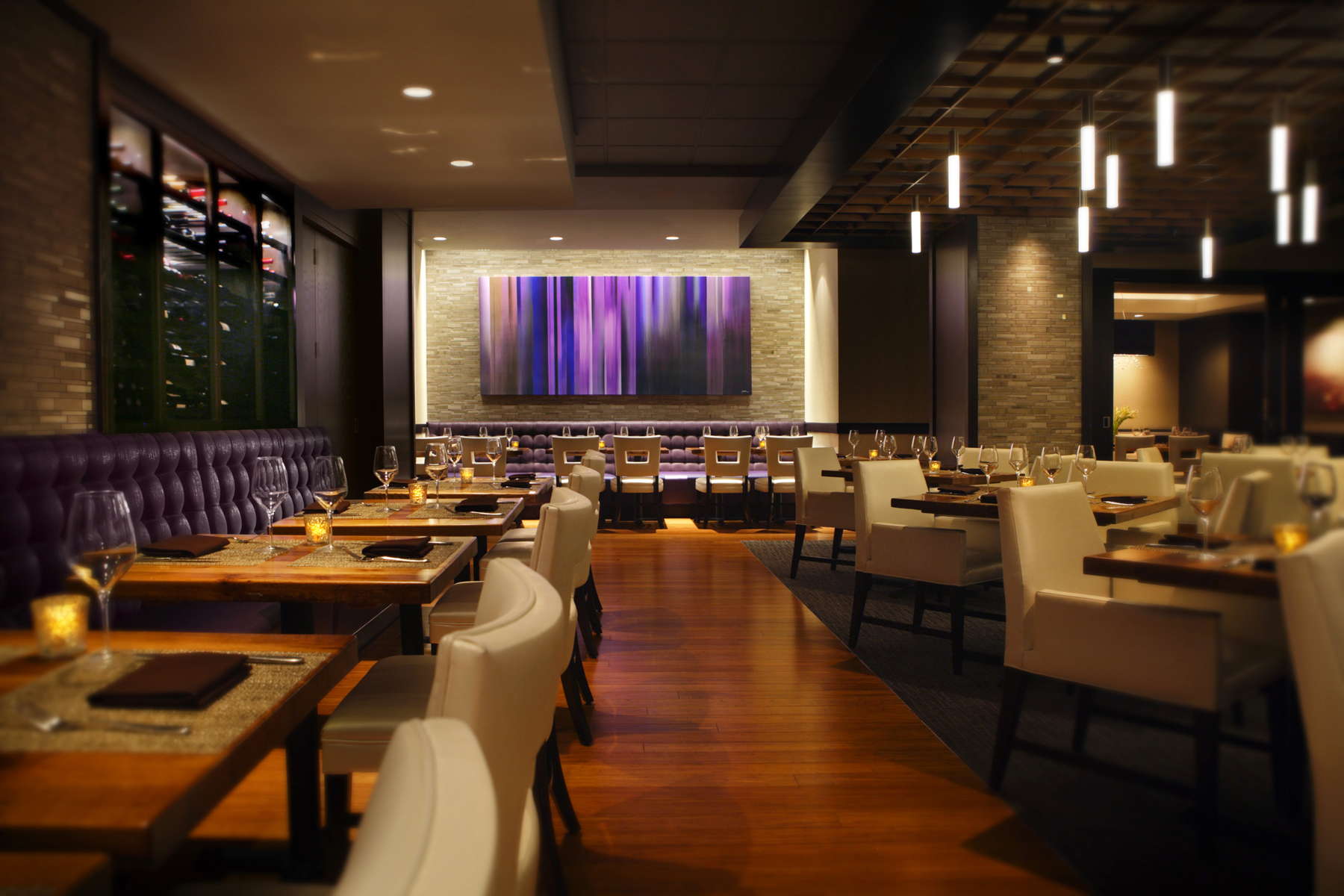