If you weren’t born into a family of wealthy fatcats, and if you don’t have a pal in town with a couch to surf, the next best thing is a hostel.

“What do you mean, ‘to calm the spirits’?” asked the white businessman I met on the plane. We’d just landed at Denver International Airport when the man detected the subtle whisp of Native flute music coming from the speakers in Concourse A.

“This airport was built on Arapaho and Cheyenne lands…At the direction of the area’s Indigenous holy men, the music you hear plays to calm the spirits.”

“Yes,” I said. “When this airport first opened in the mid-1990s, all manner of ghostly events were occurring all day and night. Doors opened and closed on their own. Sounds of rushed footsteps echoed. The airport couldn’t keep staff for more than a couple weeks!”

His grin faded and he appeared disturbed, frightened.

“This airport was built on Arapaho and Cheyenne lands,” I said, “which almost certainly included atop ancient gravesites. At the direction of the area’s Indigenous holy men, the music you hear plays to calm the spirits.”

The businessman’s pace quickened. He wished me “a good assignment” before disappearing into the massive crowd of other business types.

My assignment: visit Hostel Fish in downtown Denver. I’d never stayed at a hostel before, but I told my editor I thought it was an imperative piece. “Some of us work on the road, even during a pandemic, and we can’t afford a week or even four days at some swanky hotel,” I told her. So, the most economical option is to stay at a hostel.

I took the train from DIA to Union Station for $9, which, although it takes roughly 45 minutes to get to the city from the airport, sure as hell beats the $65 Uber charges at peak hours.

It was late when I arrived at Hostel Fish. Chad Fish, the owner, a tall, bright-eyed and bushy-tailed type, offered me a drink. “I’ll take a Moscow mule,” I said. During a quick tour, it didn’t take long to hit on the topic that a brothel used to operate downstairs, and I began to wonder what kind of spirits roam these halls, too.

The old brothel is now Ophelia’s Electric Soapbox, a music venue and brunch spot, but that was before the pandemic. When I arrived, they were closed until further notice. A few years ago, before I knew it was a former sex parlor, I’d dropped in for brunch with pals, and at the time I wondered why there was a silhouette of a giant penis staring down at me and my breakfast. “I don’t know why, but I feel like sausage and eggs right now,” I recall telling the hungover waiter.

But I digress. Hostel Fish isn’t the kind of hostel in the movies. I’ve seen the horror flicks: gory, slasher cinema where unsuspecting guests are tortured and dismembered in basements by some deranged surgeon who never seems to blink as he digs his jagged blade into his victims’ thighs, eyes, and under the ribcage. No. This place is clean, “choice,” as my Chicano grandfather would say. It’s the word he uses when he witnesses a lowrider with no dirt or dust because some esé had wiped it down with a diaper.

Everywhere you look, there’s something to catch the eye in Hostel Fish, especially the wall of cassette tapes nearest the check-in desk. If you can find the one cassette that hides a cubby hole, you can drink free for an hour.

I dropped my bags off in the one suite with a master bed and zipped back to the bar. Before long, it was midnight. A woman with a velvety voice like the late Amy Winehouse stood on a stool and sang along with her 2006 hit, “Back to Black.”

“No, no, get down from the chair—dance on the bar, it’s safer,” a voice said behind me.

And she did. I pulled out my phone to take a video, and she flipped me off with a wink and smile. It was at that moment I realized, sweet jeezus, I’ve met my people.

It was a good mix of folks: sexies and crazies, vocalists and violinists, social smokers, barflies, and a few bros here and there, but those dudes don’t last in a place like this. The ones here had clearly heard the boom of the muzak and infectious laughter coming from the second floor of the hostel and decided to investigate, but they couldn’t take how everyone was a genuine original—something they’d heard of, but had never seen or experienced for themselves.

The next morning, I woke to find a can of Pabst Blue Ribbon on the floor of my room by the foot of the bed. That’s not my brand, I thought.

“You were hallucinating,” he chuckled. “Christ, I forgot,” I responded. “…The absinthe.”

That local guy from the night before who talked politics and good beer with me for two hours must’ve helped me to my room in exchange for the handful of edibles I’d promised him. Later that night, I ran into him in the lounge area of the hostel. “You were hallucinating,” he chuckled. “Christ, I forgot,” I responded. “… The absinthe.” And then it all came rushing back to me like a dream suddenly remembered in the middle of the day for no reason at all:

Anna, the bartender, a warm soul with a smile for days, offered me the joint’s signature drink. “I’m going to make you one!” she shouted jubilantly over the crowd’s roar. A small blowtorch and a sugar cube over the glass later, I was riding the green dragon, not with opium, though. This isn’t 19th century England. This is Denver, where you can have a fine marijuana-infused three-course meal and where psilocybin mushrooms have been decriminalized. I didn’t have any mushrooms, but I did have that package of Sour Smash gummies at 10-milligrams a pop. 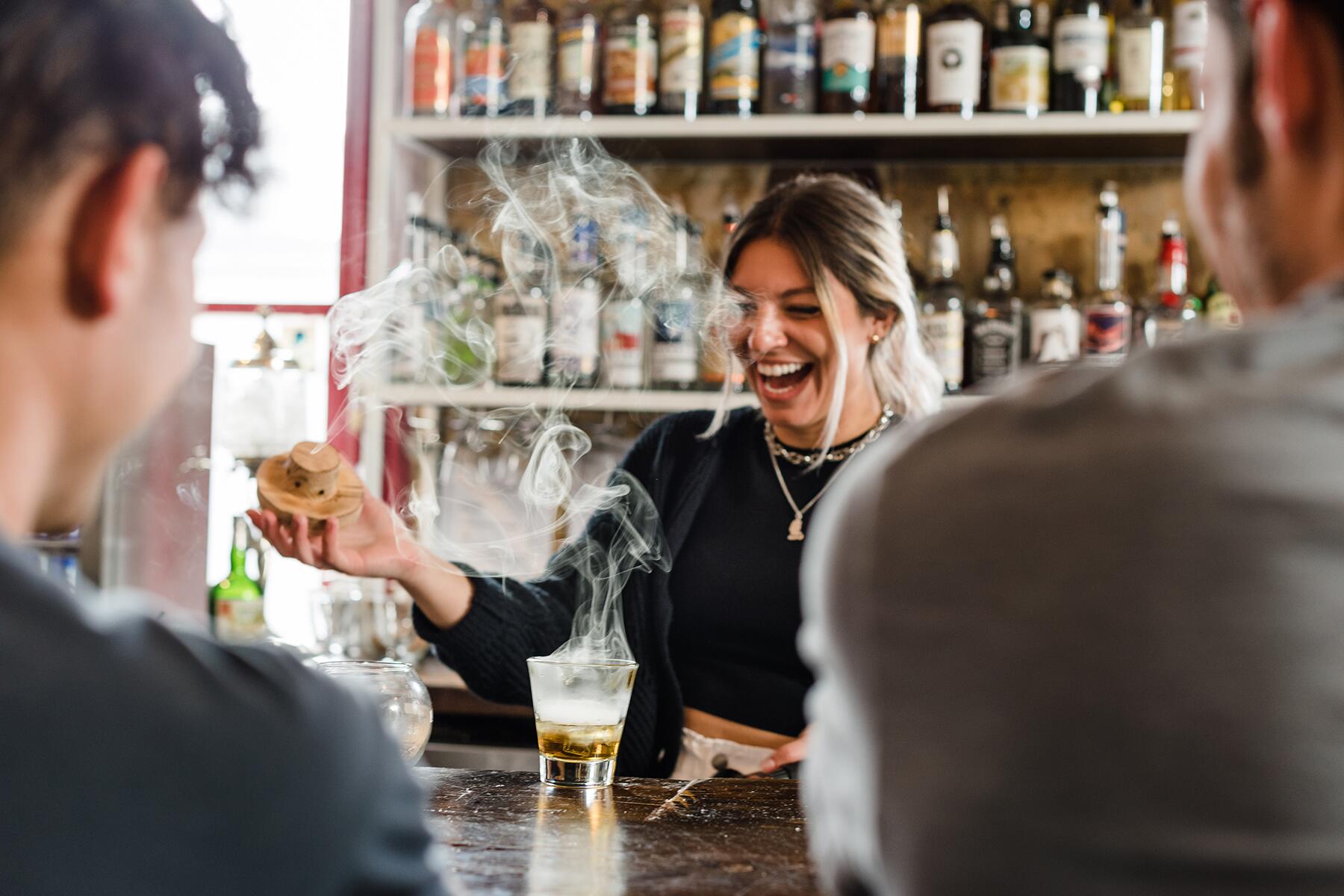 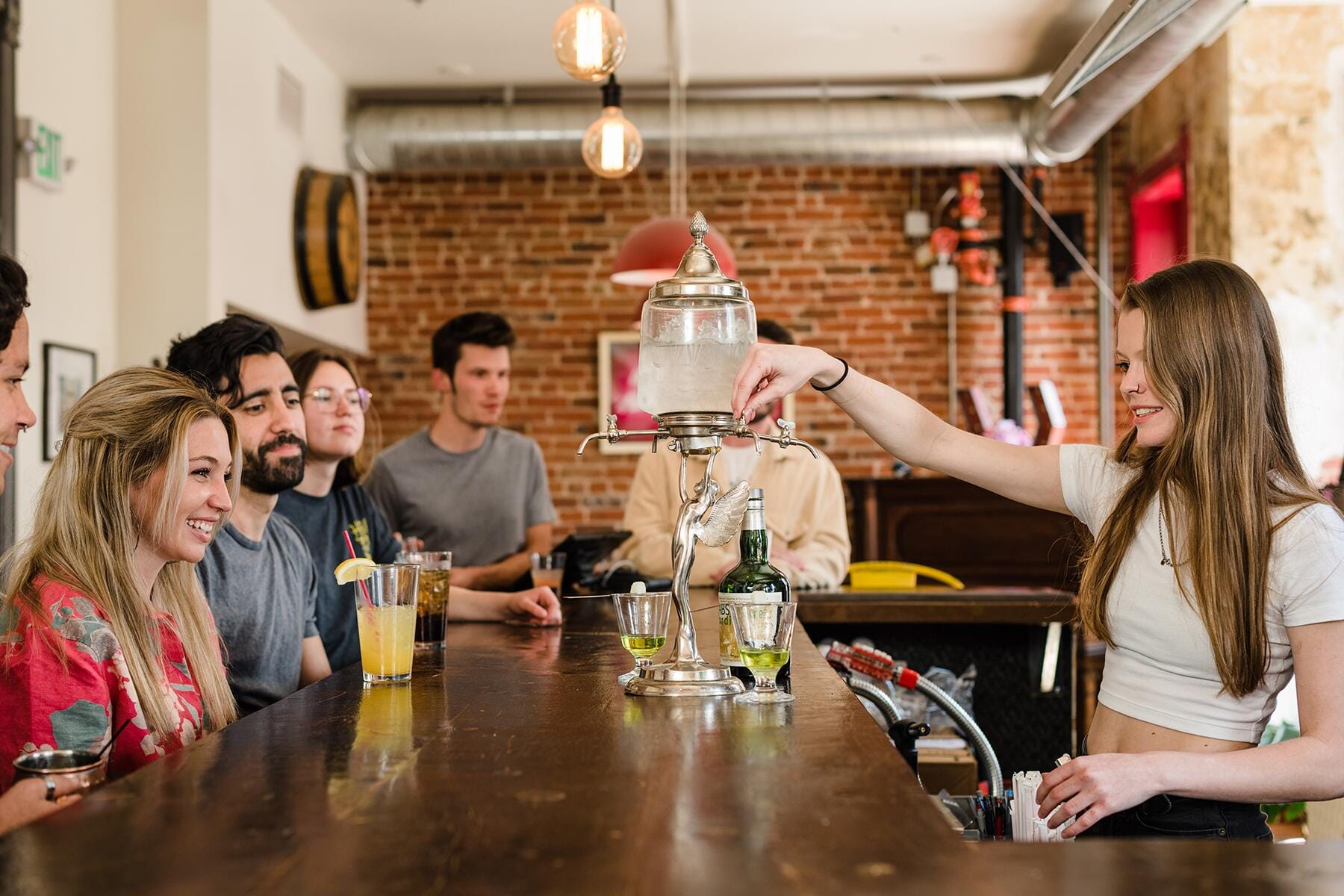 Earlier, I’d taken only five milligrams, just to wake me up after a long day of travel. Soon, after the absinthe and a few good drinks, which included two Graham Cracker Porters, I found myself in full conversation with one of the brothel’s first employees in the corner by a wall of 1960s suitcases. “Are you a ghost?” I asked. “No,” she said. A moment later, the sexy, stunning specter was misted away.

Working on the road isn’t an easy business, but it gets even far more difficult and treacherous during a brutal pandemic. Indeed, roving writers and reporters like myself need places like Hostel Fish. The Curtis, a swank hotel in Union Station in downtown Denver, can bleed you dry at $200 a night and the place doesn’t even provide sexy ghosts to chat with in corners by suitcases. So, if you weren’t born into a family of wealthy fatcats, and if you don’t have a pal in town with a couch to surf, the next best thing is a hostel, as I’ve recently learned. All those evenings in Denver I spent sleeping outside just to get the story the next day weren’t necessary, but those frigid, demonic nights are, themselves, a story for another time.

Across the street from Hostel Fish is Dagar Downtown Gallery and Axe Room. We were throwing axes and cursing our exes for hours. The owner, a Marine veteran, said he hires only vets to manage the axe-throwing cages. With every overhand throw, I felt like Jason Mamoa or a northern Minnesota lumberjack who’d finished chopping the wood and was now hunting dinner for the wife and kids back at the wooden cabin.

By my third night, I was giddy and still hallucinating here and there. It could’ve been from my general lack of sleep or perhaps the absinthe still rummaging around in my system and writhing like a stripper on my cerebellum. That morning, I’d moved from the big suite to a shared room called the Aspen–four bunk beds lined the wall with the shared bathrooms just down the hall. I forgot to bring my clean clothes for the day into the men’s shower-and-shave area, and having accidentally left my towel on the men’s room floor, and instead of putting on the dirty clothes I slept in the night before, I ran naked down the hall to my room, like a porn star late for a shoot, laughing manically the whole way. 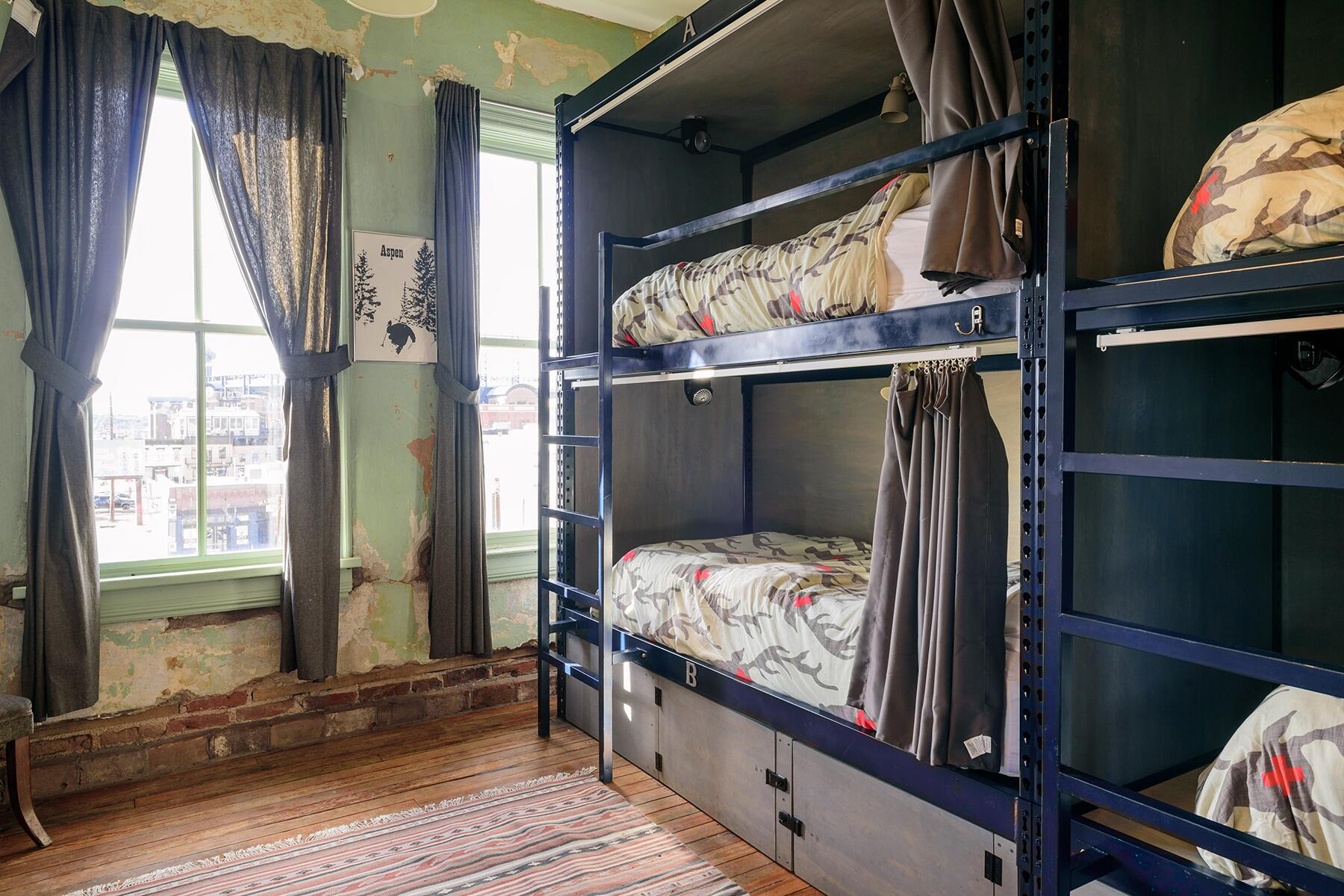 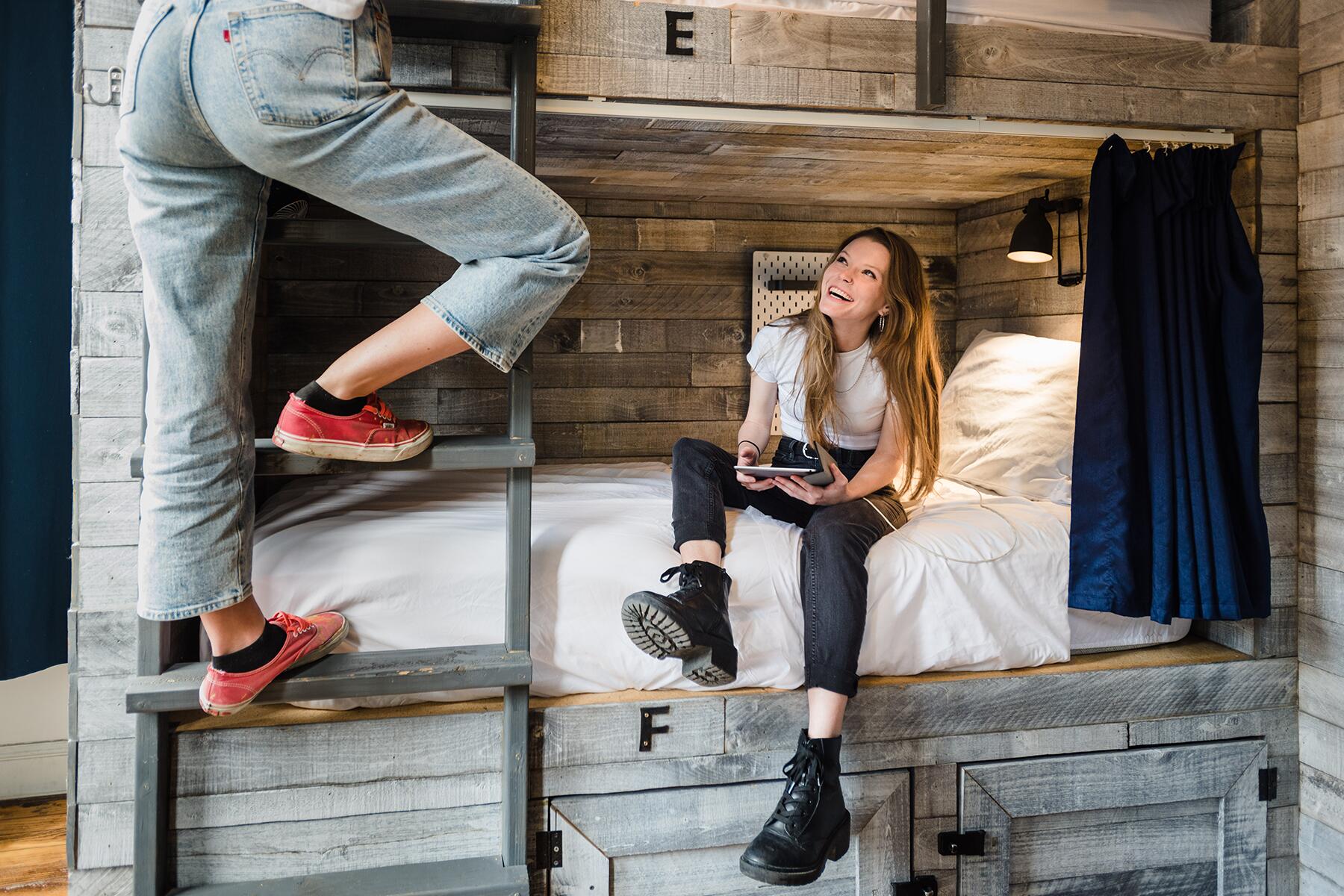 Naked in my shared room, I decided to do some writing: “While local mom-and-pop shops and time-honored jazz and gin joints in Denver have fallen victim to COVID, somehow Hostel Fish still stands,” I wrote in my journal/confessional. The notes continue: “The staff, in fact, live in the place. A few are just passing through on their way to god-knows-where.” Which is true. Anna, the bartender with the warm smile, however, is just a few thousand miles and a big blue sea away from her desired destination: Berlin. “I’ve never been,” I said. “I’ve heard Germans have an insatiable fetish for Natives—Indigenous folks. My people. We’re like a sexy foot to them that they go absolutely mad over.”

I left Hostel Fish in the middle of the night. I could hear the bellyful laughter and infectious music as I entered the street with my two filled-to-the-brim black bags. I’d hoped to see the gorgeous ghost of yore I’d met the other night standing by the window, observing me longingly as I entered the Uber, but she didn’t show. A homeless man asked if I had a smoke, so I gave him the pack. And as I entered the Uber, I was stricken with a raw melancholy, like the feeling that rushes over you when you leave home, not knowing when you’ll return. I thought, in that moment, that I may never stay in a rigid, money-hungry corporate hotel again.

“Where is it that we’re going?” the driver asked, pointing at the map on his screen.