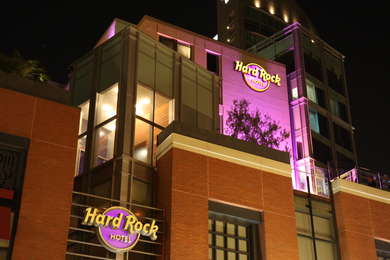 Sleek, sexy, and set in the heart of the happening Gaslamp Quarter, the Hard Rock Hotel is a San Diego hit, especially for the young and ready to party. The hotel nails the rock star vibe, from the massive selection of music memorabilia to Float Rooftop Pool and Lounge, where hot people frolick from poolside-mimosa morning to late-night weekend rager. At 11-stories tall, the Hard Rock is technically one-floor shy of being a high-rise, but the rooftop still offers excellent sky-high views of the harbor, Petco Park, the Coronado Bridge, and the historic Gaslamp sign.

The Hard Rock’s Studio guestrooms are cool and contemporary with taupe and burnt-orange hues, cantilevered furniture, sleek lighting, and a Halo-lit bed designed to look like it’s floating. Some of the rooms feature green room-inspired mini-bars with a pair of barstools.

Ballers have their pick of ultra-chic VIP Suites. Some even feature a wraparound deck with a private outdoor Jacuzzi for four.

YOU SHOULD KNOW Some of the guestroom bathrooms feature a lot of semi-opaque frosted glass, including the water-closet door. Awk-ward.

Behind the check-in counters, a huge video wall that calls to mind the screens at concerts pulsates with abstract lights and blurred-color photos of rock stars. Sleek white floors, shiny chrome accents, velvet ropes, and music memorabilia add to the exclusive club vibe.

Now that marijuana is legal in California, we can LOL at this in the open: The hotel has 420 rooms and a bar called Mary Jane’s with a 4:20 pm happy hour. Still, don’t even think about lighting up in your room. (Ahem, edibles.)

If you’re not soaking up the sun in San Diego, you’re doing it wrong. That’s especially the case at Hard Rock Hotel, where the pool is a big part of the draw. It’s for guests only -- or those who buy expensive day passes -- and features chaise lounges and cabanas.

Pamper yourself like an A-lister at the hotel’s Rock Spa. The soothing space features warm organic-modern decor and offers an extensive menu of massages, facials, and body skincare treatments.

Book a makeup sesh before a big night out or a hangover-relieving massage the morning after (or both!).

On the ground floor, the Hard Rock’s 207 Nightclub has a decent scene -- it’s not the best dance club in town, but it’s right there. The hotel’s rooftop Float lounge, a weekend scene hotspot, features chic seating, fire pits, and panoramic bay and Gaslamp Quarter views. During the summer, the bar hosts Intervention Sundays, a daytime pool party with DJs.

With the Convention Center trolley station a mere 3-minute walk away, guests can see a lot of sights without a car. The trolley’s Green Line services the Gaslamp Quarter, the Santa Fe Depot (home to Amtrak and the Coaster, which services coastal communities to the north), Little Italy, Old Town, and the world-class Fashion Valley shopping center. Interstate 5, a major north-south freeway, is about a mile from the hotel; I-5 connects to other highways that cover the sprawling region.

There are three steakhouses within two blocks of the hotel, including Fleming’s Prime Steakhouse and Wine Bar (3-minute walk), Donovan’s Steak and Chop House (3-minute walk), and cheekily named Gaslamp Strip Club (4-minute walk). All serve expertly prepared cuts of meat, but have different personalities. Fleming’s and Donovan’s both have a traditional vibe, with dark wood, white tablecloths, and candles -- and both are very spendy. On the opposite end of the steakhouse spectrum, the Gaslamp Strip Club is hip and playful. The cavernous space features brick walls, exposed rafters, black tufted-leather horseshoe booths, starburst chandeliers, and paintings of classy pin-up girls hanging all the way to the ceiling. The menu includes “Sinful Starters,” “Sassy Sides,” and “Seductive Sweets” to complement the classic steaks and chops.

When it comes to nightlife, the Gaslamp Quarter district has something for everyone. Committed clubbers can hit up four dance clubs in a single night for $25 on the guided Club Crawl San Diego that lets you bypass lines and includes cover charges and drink specials. One stop is at Omnia (5-minute walk), the San Diego outpost of the Vegas megaclub. On the 22nd floor of the Gaslamp Marriott, the swanky rooftop Altitude Sky Lounge (2-minute walk) overlooks Petco Park and the Gaslamp and features lounge seating, fire pits, and DJs. Drinks aren’t cheap, but with such epic views, you get what you pay for.

You don’t have to be a chart-topping artist to feel like a rock star -- or at least a VIP with a backstage pass -- at the Hard Rock Hotel. Sleek decor, a full-service spa, a Nobu restaurant, and a rooftop pool and bar that hosts summer poolside parties add to the vibe. Plus it’s right in the Gaslamp, with more than 100 restaurants, bars, and music venues nearby.

#3 The Best Hotels for Nightlife in San Diego

#4 The 10 Best Hotels in the San Diego Gaslamp Quarter