Skiing, and the freedom it brings, feels like a wormhole through space and time—I can almost pretend that it’s January 2020 and life is still normal.

“Mask up, Helly Hansen!” a lift attendant yells at a skier wearing an HH-branded jacket. She’s standing in the “private cohort” lift line in front of us and has forgotten to re-position her buff.

“Sorry,” she mumbles, hurriedly covering her mouth and nose like a scientist inside a Biosafety Level 4 lab who’s just realized her hazmat suit is compromised.

“You need a Taser to make your job easier,” her ski companion jokes to the liftie. “Or a water gun!”

The surreal reality of lift attendants—those clichéd pot-smoking ski bums of popular imagination—enforcing pandemic dress codes isn’t lost on me as we shuffle toward the chairlift, ensconced in our own thermal layers that include a helmet, goggles, and a makeshift double mask (a thin buff underneath a thick neck warmer). But on this sunny January day, halfway up Mt. Mackenzie at Revelstoke Mountain Resort in British Columbia, liftie mask police are part of the new normal. 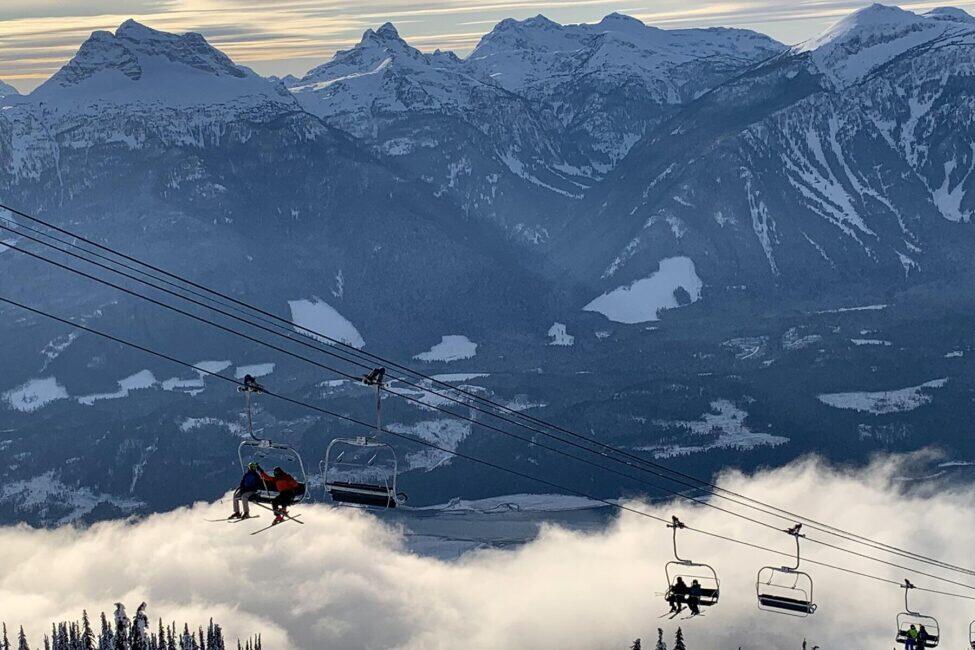 Nearly one year into the COVID-19 pandemic, the U.S.-Canada border remains closed and the Canadian federal government has canceled all flights to Mexico and the Caribbean through April. Parts of the country are in lockdown—fortunately, not B.C., where I live—and health officials recommend against all non-essential travel.

The ski getaway has become the last vacation standing; the only option available that combines a change of scenery with a healthy outdoor activity and the opportunity to recharge in nature. And B.C. resorts have stepped up with strict regulations to protect guests and staff that include separate lift lines for private and mixed cohorts, reduced capacity in restaurants, and mandated double-layer masks to be worn at all times except when you’re actually skiing.

My husband, teenage daughter, and I have driven 128 miles from Kelowna, in B.C.’s wine and lake country, to Revelstoke, a railway town situated between two massive mountain ranges that regularly break snowfall records. Revelstoke Mountain Resort receives an average of 45 feet of snow every season that’s spread across 3,100 acres of open bowls, gladed gullies, vertigo-inducing steeps, and a smattering of corduroy groomers that snake down the mountain’s 5,620 feet of elevation—the longest vertical drop of any ski area in North America. 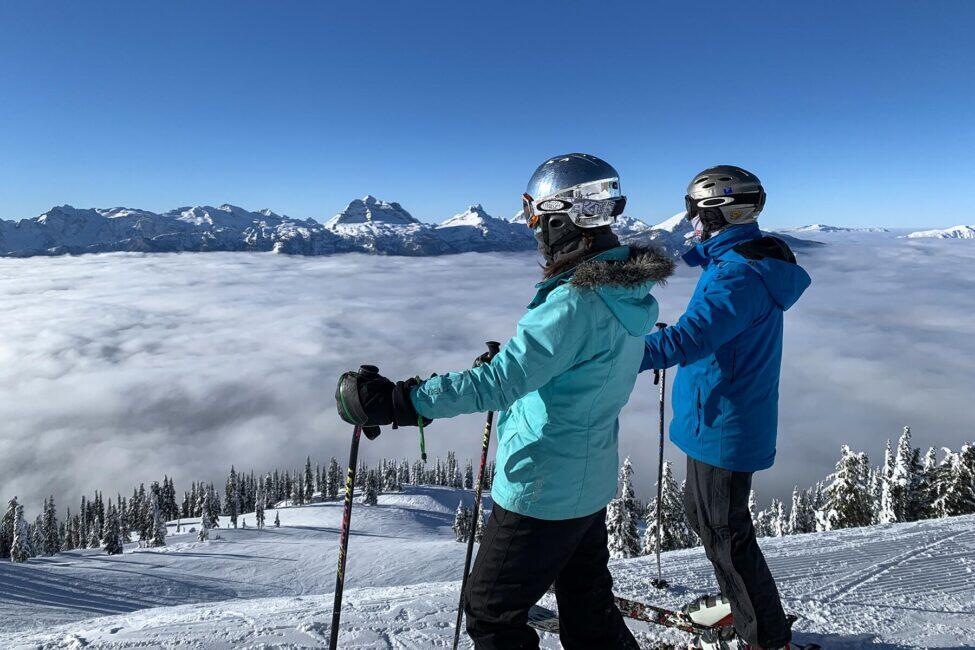 Our plan is to stick to our bubble group of three. We’ll ski by day, strictly adhering to the resort’s and town’s COVID-19 protocols, and watch Netflix movies by night inside a spotless, ski-themed basement suite called Snowdrifters Guest House that we found on Airbnb. The accommodation includes a separate entrance and a full kitchen, so we can eat most meals there, too.

Still, it’s a bit awkward when we arrive, all masked up in the entryway. Our physically distant and likewise masked host, Helen Kondos-Sheppard, is eager to chat about the town, the resort, and what’s been an unusual winter. Her guests are both fewer and more hunkered down than last season. Normally, she’d be sold out through spring break, but many skiers from Vancouver canceled after a B.C. travel advisory was announced in late November.

Province-wide restrictions including a mask mandate inside indoor public spaces and rules against group gatherings, combined with news of “COVID clusters” in B.C. resort towns including Whistler, Big White, Fernie, and Revelstoke, have also been a deterrent to would-be schussers. Still, Kondos-Sheppard is loath to turn out-of-town guests away.

“I feel like if everyone’s doing their part, with the hygiene aspect and following the rules, it’s OK. A lot of businesses feel the same way,” she says. 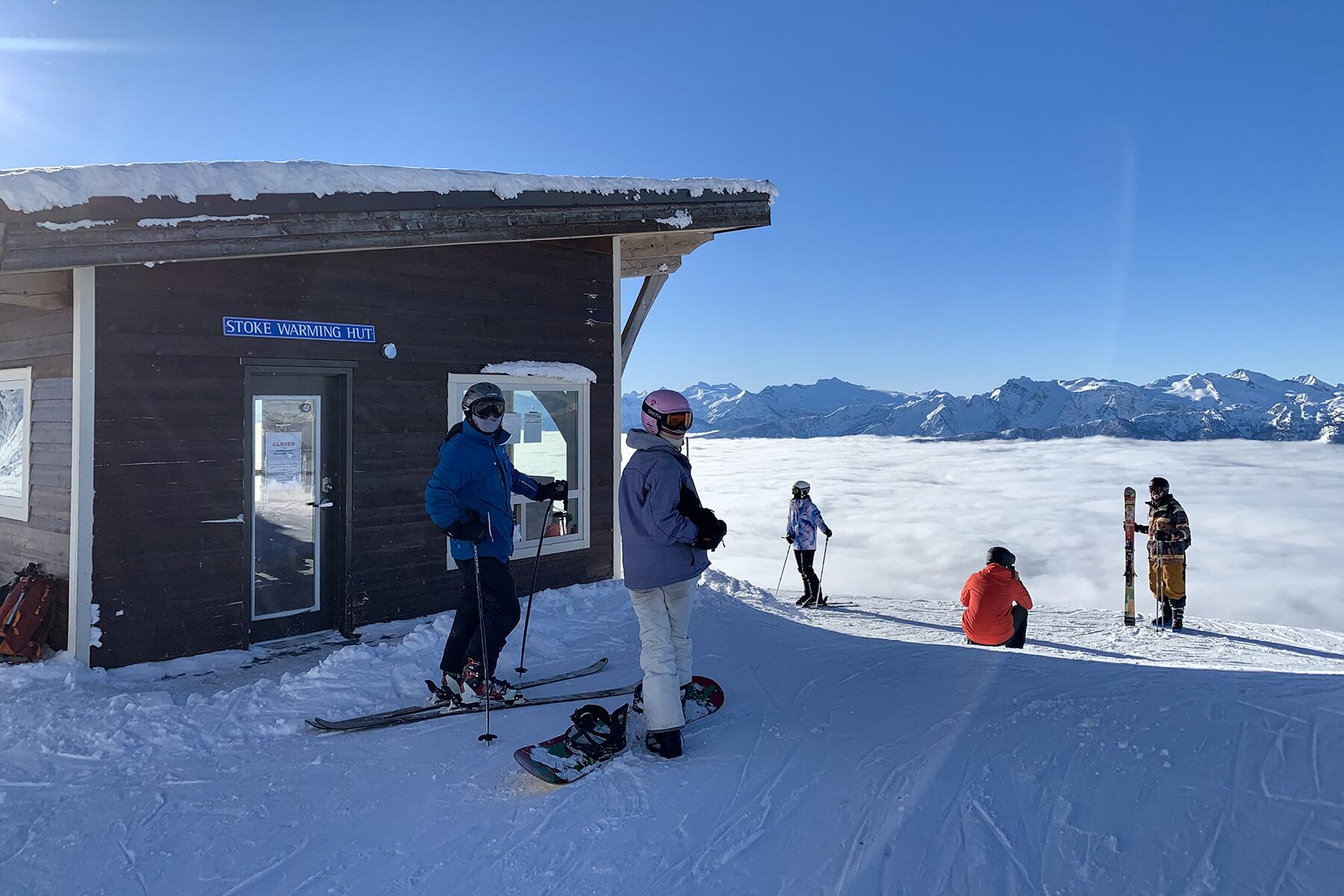 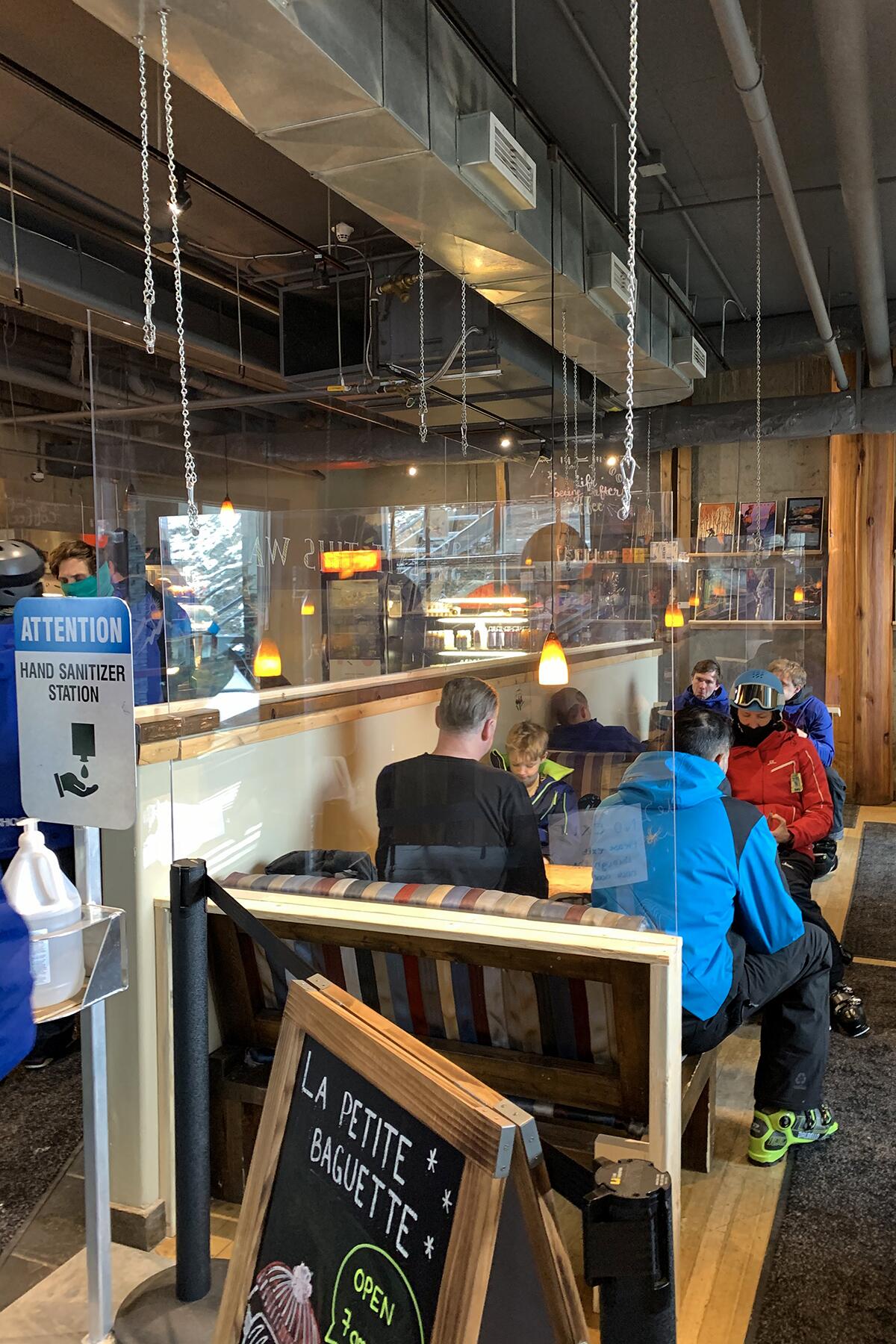 Marooned in the middle of B.C., more than two hours from the nearest international airport, it’s difficult to get to Revelstoke even during non-pandemic times. It bodes well for our on-mountain experience: the parking and lift line horror stories we’ve heard about from Whistler on the West Coast and Sunshine Village to the east in Banff, both within a two-hour drive of big cities—Vancouver and Calgary, respectively—are nonexistent here.

When we pull into the parking lot on Saturday it’s a ghost town for a January weekend morning. Evidently, skiers from Alberta and B.C.’s lower mainland are mostly heeding travel advisories and carving turns closer to home. This jives with Revelstoke’s numbers—daily visits are down 50%, says spokesperson Carly Moran.

“We did the math at the beginning of the season and braced ourselves. This is what we have to do to keep people safe. That’s the reality of this year,” she says. “Technically, yes, (people) can come. But please wait until next season.”

Reduced capacity is also by design. In an effort to minimize close contact and touchpoints, and to control skier numbers on the mountain with daily caps, Revelstoke has gone exclusively to online ticket sales (if the day sells out, ticket sales close for that date).

It’s a similar story inside the resort’s on-mountain eateries and base area restaurants, which also have reduced seating along with plexiglass barriers between booths and tables (what’s more, both upper-mountain warming huts are closed this season, as there’s no way to enforce physical distancing). 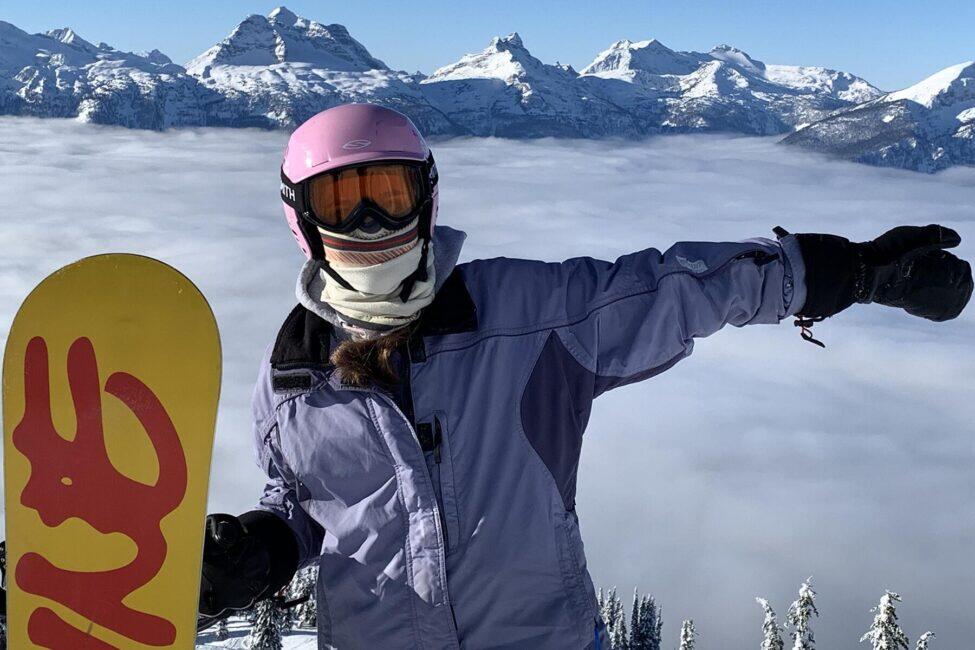 We pick up our prepaid two-day passes, walk past hand sanitizer stations and the ski school kiosk where masked-up instructors wait for their private and bubble-group lessons, and clomp into our own eight-person gondola car. It’s a bracing 18 degrees Fahrenheit outside, but signs inside the compartment ask that we keep the windows open for ventilation. The cabins are also sprayed periodically with a microbe shield that ruptures bacteria and viruses on contact.

After one more gondola and a quad chairlift ride, with zero lift lines, we’re deposited on the resort’s sun-bathed summit. We’ve burst through a layer of clouds that hides the Columbia River Valley more than a mile below. The distant peaks of the Monashee Mountains to the west appear as snow-capped islands atop a white horizon of shimmering ice crystals.

At this moment, bundled in gear to rival an astronaut and with empty ski runs calling like a siren’s song, COVID seems as distant a threat as Earth’s problems to an astronaut on the moon. Skiing, and the freedom it brings, feels like a wormhole through space and time—I can almost pretend that it’s January 2020 and life is still normal.

The ski getaway has become the last vacation standing; the only option available that combines a change of scenery with a healthy outdoor activity and the opportunity to recharge in nature.

We ski eager turns toward the South Bowl and delight in powder stashes hidden in glades that border groomed runs before traversing to a mid-mountain area with easier terrain for our daughter, a novice snowboarder.

Then, my husband and I make tracks to the Stoke chairlift, where we do lap after lap in the aptly named Separate Reality Bowl. The snow covering the steep, alpine pitches is a week old but skis like it fell yesterday because so few people are on the slopes this year.

At the end of the day, we head to Mt. Begbie Brewery for a subdued après ski session of craft beer for the adults and Snapple for our daughter. Physically distant from the other patrons, we pore over the old-school paper trail map and plot out our Sunday, which includes forays into the North Bowl and more runs in Separate Reality Bowl, which is fitting.

The weekend has delivered a much-needed separate reality—we’ve briefly escaped, both mentally and physically, the crazy world of COVID in a safe and healthy way.