Walking into Portmeirion is a little like falling down the rabbit hole in "Alice in Wonderland"—equal parts enchanting, whimsical, and often not quite what it seems.

The first thing you notice as you enter the village of Portmeirion is the explosion of color: clusters of pastel-hued cottages with turquoise shutters that hug the cliff sides, tall towers, and domes, peeping out from the higgledy-piggledy, terracotta rooftops. A trip down the hill takes you to the grand, central piazza, surrounded by stately Italianate architecture and a crumbling 17th-century colonnade that overlooks a pristine, landscaped lawn with pockets of vibrant flowers, palm trees, and a life-size chess set. It’s very easy to forget that you’re not in the Italian town of Portofino and are, in fact, on the fringes of Snowdonia National Park in northern Wales.

The brainchild of architect Sir Clough Williams-Ellis, Portmeirion—built between 1925 and 1973—is a love letter to architecture and the natural world. His mantra was to “Cherish the past, adorn the present, construct for the future,” with a serious dose of fun and color thrown in. A tireless environmental campaigner, it was important to the architect to show that a naturally picturesque location can be developed without spoiling it and every element of the village has been constructed to blend beautifully with the surroundings. The village itself showcases a real mishmash of architectural styles, including Italianate, classical, and baroque, as well as salvaged and upcycled architecture, leading Clough to refer to it as his “architectural mongrel” and his “home for fallen buildings.” 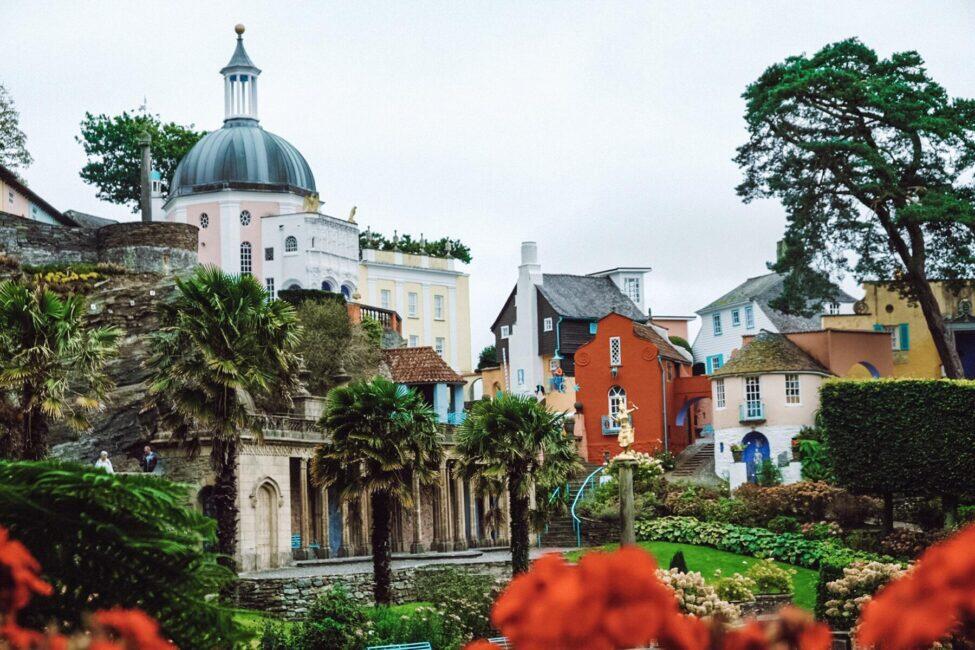 Some of these architectural finds include Portmeirion Hotel’s 17th-century painted plaster ceiling, depicting the trials of Hercules, which he got his hands on at a local auction for a grand total of 13 pounds. Another example of his architectural upcycling is the piazza colonnade, which hails from Bristol and dates back to the 17th century. Offered to Clough due to damage caused by a World War II bombing, it has now become one of the main features of the village and, if you look closely, you can even find a fun addition on a stone door—Clough himself in gargoyle form.

“You can see his sense of humor everywhere here,” Portmeirion’s location manager Meurig Jones says. “His attention to detail was astounding. He wanted people to see something new every time they came here.” It’s something that’s clear as you walk around, with hidden murals, trompe l’oeil paintings of windows, and quirky characters in nooks and crannies all over the Italian Riviera-inspired village.

The architect first had the idea for Portmeirion as a child and 20 years later, in 1925, he came across the perfect site: an estate in Aber Iâ—Welsh for frozen mouth or glacier estuary—near Penrhyndeudraeth, where he fell in love with the picturesque landscape of the estuary. He didn’t hesitate to make an offer and this site, which would then go on to become the renamed village of Portmeirion: Port, due to its coastal location and Meirion, Welsh for Merioneth, the county in which it lay.

The first building to open to the public was the revamped Portmeirion Hotel in 1926, allowing a stream of tourism revenue to help fund the continued expansion, which now includes self-catering cottages, cafes, restaurants, and a village shop. Here you can buy the world-renowned Portmeirion pottery, which was founded in 1960 by Susan Williams-Ellis, daughter of Clough Williams-Ellis. For those who want to wander beyond the village, there’s also Gwyllt to explore—a 70-acre sub-tropical forest with 20 miles of paths, a hidden lake, and temples. All with the vast backdrop of the estuary and the wild Welsh coastal landscapes beyond. 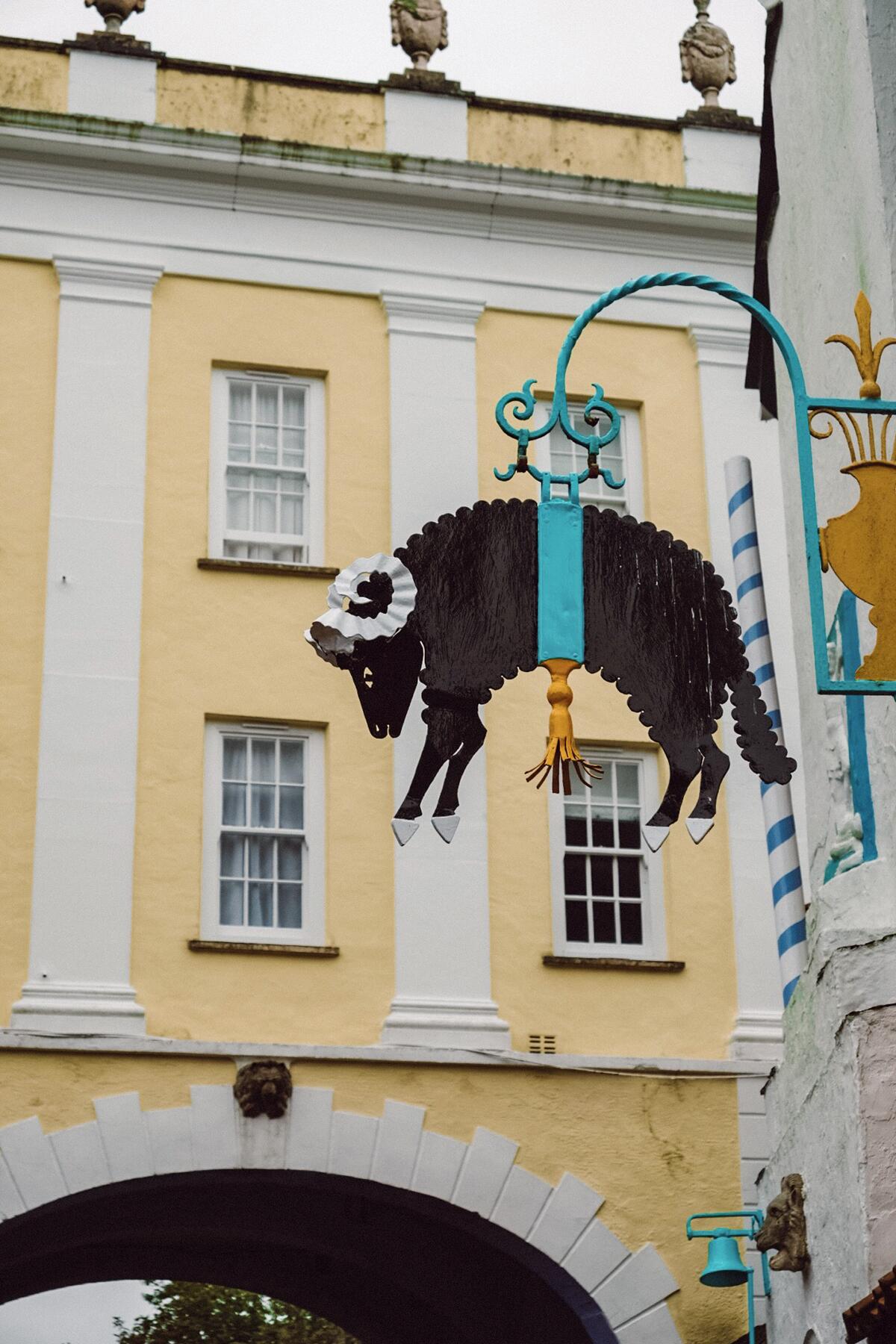 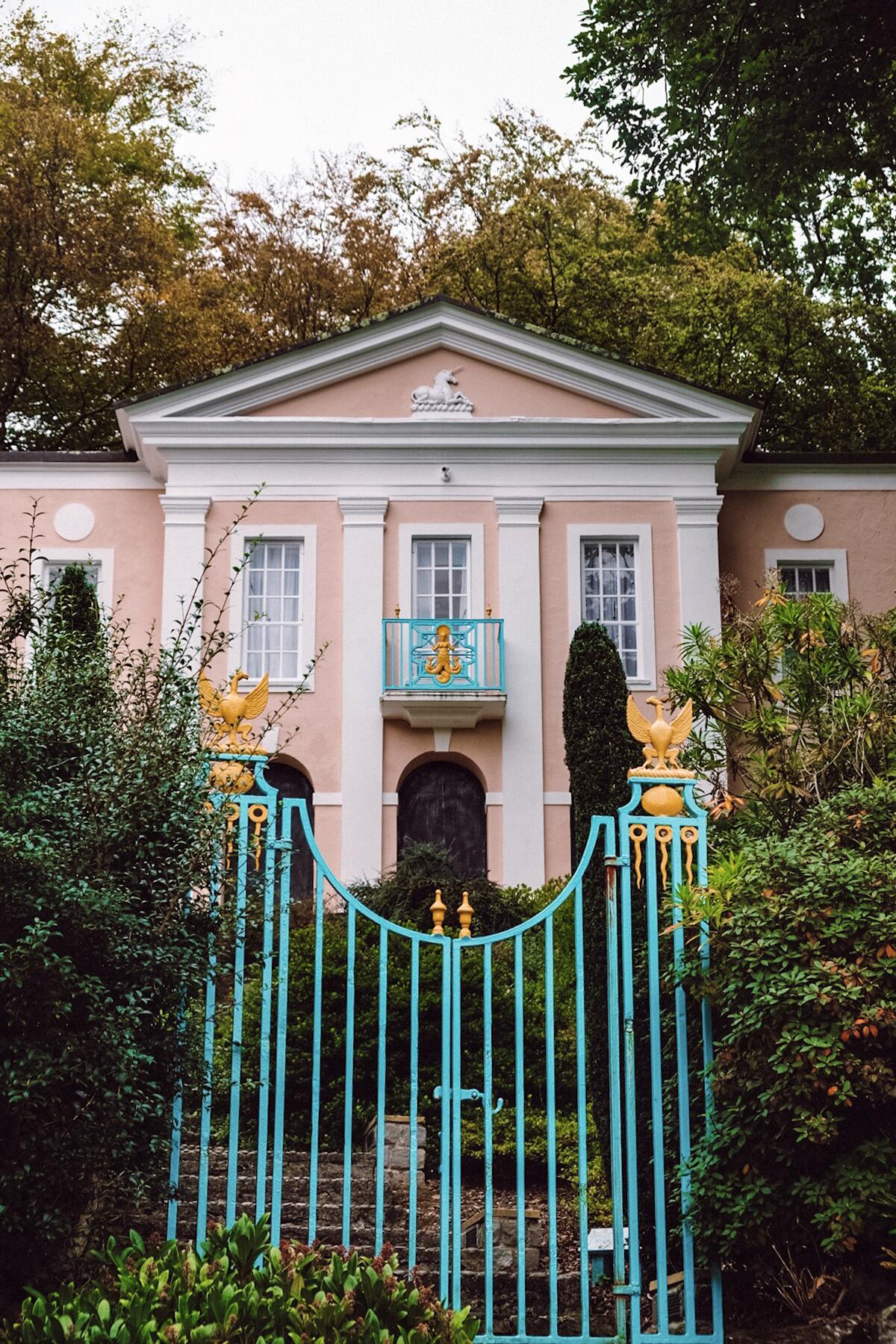 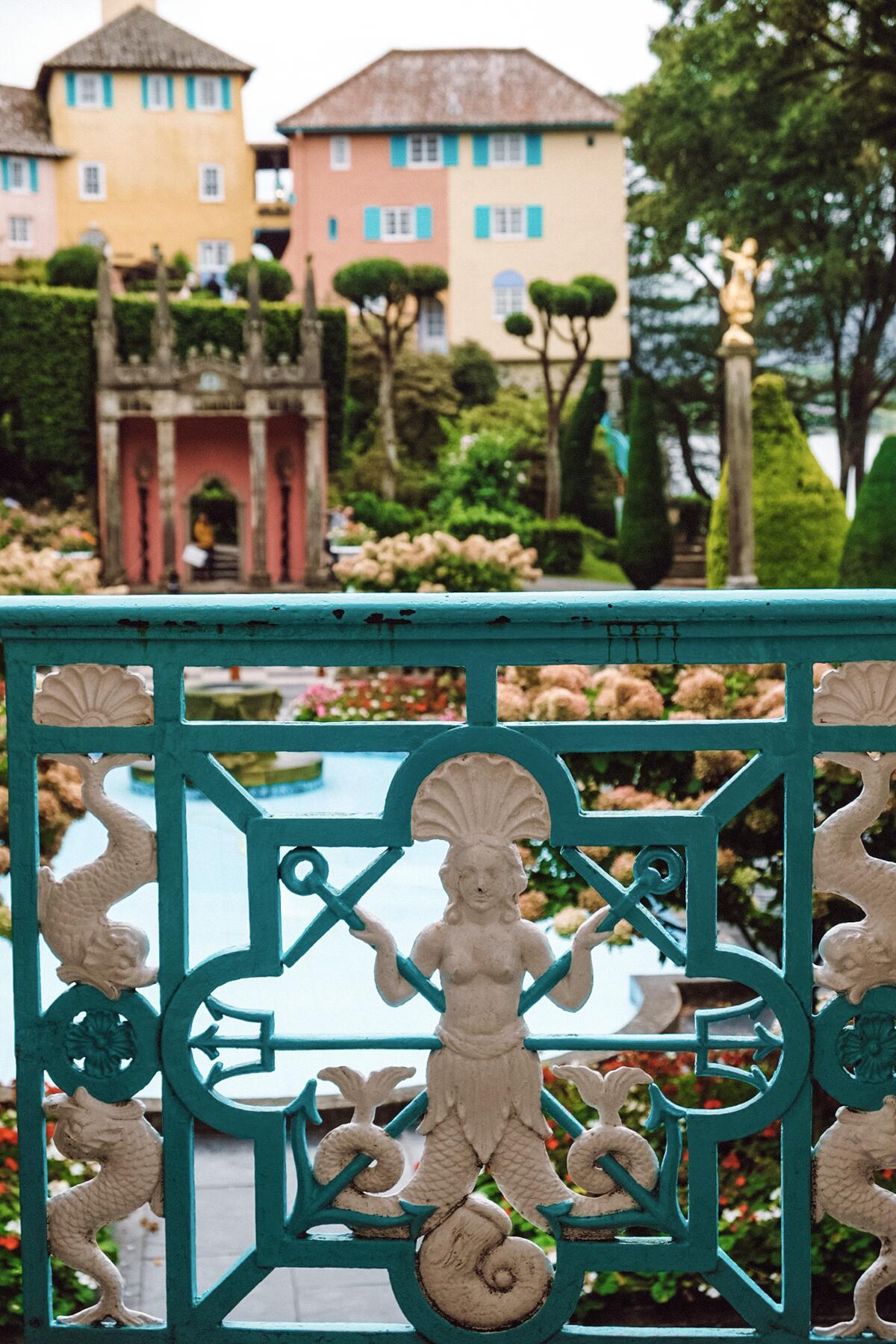 Portmeirion was built almost continuously from 1926 to 1976, with work stopping for a period during World War II. Though the war brought expansion to a halt, it did still attract well-to-do visitors who swapped the dangers of city living for countryside escapes. These included the renowned playwright Noel Coward who, in 1941, wrote Blithe Spirit while in Portmeirion.

The village has continued to attract writers, authors, artists, and architecture lovers ever since. “It always has been creative people that got what Clough was trying to do here,” Jones says. Most notably, Portmeirion was the backdrop for the 1960s cult classic series, The Prisoner, starring Patrick McGoohan as the iconic character Number Six. This arguably is what put Portmeirion on the map internationally and since then a host of other productions have been held here, from Doctor Who to Brideshead Revisited.

In fact, even the staff that keep Portmeirion running are themselves subjects of a recent UK documentary, The Village, with Jones being one of the main “characters,” alongside a host of other employees, from curators to housekeepers. It clearly takes a village to run this village, and the staff is kept busy all year round keeping Portmeirion at its vibrant and pristine best. “Our head painter who’s been here over 40 years has painted every building seventeen times,” Jones says. It’s not just standard painting either, the buildings need to maintain the weathered look, which means varying the tones of the paint with painstaking precision.

The village was a favorite with music stars too, with The Beatles counting themselves as fans. “The Beatles manager, Brian Epstein, and his family rented one of the gatehouses in the ’60s and of course brought the movers and shakers of the day here to show them this unusual place. He became quite the ambassador for Portmeirion and loved to show people this unique place, somewhere where they wouldn’t get hassled,” Jones tells me. Stars past and present have also come to play at Festival Number 6, which has been held here since 2012 (now on hiatus), bringing a whole new demographic of music-lovers to the village.

There’s no doubt that Clough would love to see how his architectural wonderland is still inspiring people to this day, his labor of love until his death in 1978. His final wish was for his ashes to be shot into the sky like a firework over the village as part of their New Year’s Eve firework display—a strange and creative yet apt farewell for this master of fun and imagination.