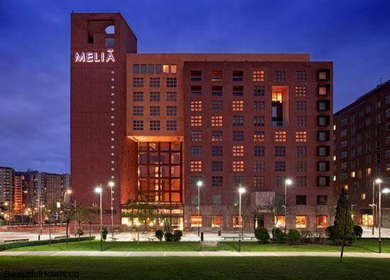 Designed by famed architect Ricardo Legorreta as a tribute to the Basque sculptor Eduardo Chillida, the five star Meliá Bilbao is as much a piece of modern art as it is hotel. Nestled in one of the most idyllic corners of the city, with the river Nervíon to one side and Doña Casilda park to the other, the hotel is both removed from the bustle while still within easy walking distance to the commercial center and the museums. The towering property boasts sensational views of the city from the understated yet airy rooms. And while the rust and salmon block building may be too industrial-brusque for some, the breathtaking interior, Michelin-star restaurant, and laundry-list of inspiring amenities have deservedly put Meliá Bilbao on the map as one of the hottest hotels in town.

Per usual, the hotel offers a variety of rooms, from the standard Meliá Room all the way up to the Presidential Suite. A standout value of the hotel is that even the most basic options are spacious and stylish. The rooms possess a minimalist refinement; what feels cookie-cutter upon first glance is quickly subverted and the careful touches and curated details become apparent as you settle in. Rich cedar trim, flat screens, temperature control, and particularly pleasing floor-to-ceiling windows that are cut into squares by the buildings exterior top it all off.

The ten-story hotel is much taller than most of the surrounding area. If it is not a busy time, try requesting a high room for spectacular views of the city and even the Guggenheim.

The bathrooms are the real crème de la crème of every room at Meliá Bilbao. A lavish bathtub appears to sink into the sumptuous slab of marble around it (make that a Jacuzzi if you’re booking a suite). Surprisingly spacious with clean lines that are pleasing to the eye, the bathroom also has a separate shower and enormous mirrors running the length of the marble countertops.

Stepping into the Meliá Bilbao lobby is an arresting artistic experience. Inspired by the shipyards that used to populate the area, the ten-story atrium evokes a post-industrial shipping vessel pointed to the sky. Exposed steel support beams crisscross up the length of one wall while Iranian pink marble gives a rusted hue to another. The interior is dominated by modern architectural design with themes of squares and rectangles and plenty of 90-degree lines. Two central sculptures—including an enormous Art Nuevo light fixture—tie the ground floor together, while an impressive art collection that includes an Antonio Clavé and lots of model boats built from the materials of the old ships themselves fill in the sparse walls.

An open-air heated pool on the 6th floor provides sweeping views of the Nervión River and the city beyond.

There is a roof above the pool to protect from the elements, so guests can dive in even in the winter. It is a true highlight of the hotel during any season.

Though the hotel does not have all of the luxuries of a full service spa, the Wellness Center does provide a range of massages, treatments, and two saunas.

TIP: Oatmeal Soap can be found in the changing rooms here that is not present in the hotel rooms. Grab some for your room or for later, it will leave your skin feeling soft, scrubbed, and renewed.

Situated on the sixth floor, the gym boasts skyline views of the riverfront below. You’ll find LifeFitness treadmills, Studio-Bikes, machines, and free weights that round out a well-fitted gym by hotel standards.

YOU SHOULD KNOW The gym has wood floors, so if you’re used to throwing weights around you may want to reconsider an exercise routine here.

Two Basque restaurants are housed in the hotel, the more famous of which, Aizian, is a Michelin Star venue regarded as one of the best restaurants in a city already bursting with gastronomical competition.

The dishes at Aizian are inventive and daring, which, for some, could translate into intimidating. The restaurant just next door, Quatre, provides high-excellence cooking of more traditional Basque cuisine.

Located on the ground floor of the hotel, the electric blue hues of the Q-lounge catch the attention of thirsty patrons passing through the lobby like moths to a flame. A marble entry portal leads into a sleek cocktail bar with high ceilings and a back lounge with ample seating. The cool and trendy ambiance inside feels right at home in the modern hotel. And during the day, light spills through the tall windows giving an airy feel to the space to make it as inviting in the afternoon as it is at night.

Conveniently located in the center of the city alongside the Doña Casilda Iturrizar Park, the hotel is within short walking distance to Bilbao’s upscale commercial neighborhood, the Guggenheim, and the Fine Arts Museum. The old town, however, is a half-hour trek by foot. Luckily, the tram stops just down the street, providing gorgeous river views as it guides you to Casca Vieja’s classic pintxos bars in an easy 15 minutes, plus plenty of taxi service for other destinations.

You should know: The trams and metros stop running late at night, so if you are going out late, especially on a week night, prepare to take a cab back to the hotel.

You will find no shortage of phenomenal places to eat in Bilbao. For a grand tour of all things pintxo, take the tram or cab over to Nueva Plaza (15-minute tram) in Casca Viejo. Make sure to try Café Bar Bilbao and La Olla while you are there. And for a unique fine-dining experience only found in Bilbao, we suggest a meal at the highly regarded Bistró Guggenheim (10-minute walk), where you can feast on imaginative Basque dishes from the exclusive terrace whilst surrounded by the museum’s iconic titanium exterior.

Take a cab (8-minutes) or a nice stroll (18-minutes) to the historic street of Ledesma, home to some of the best pintxo and cocktail bars in the city. Among the bustling crowds of locals and tourists alike, you can find crowd favorites like Café Iruña, an institution that is over 100-years old famous for its gorgeous Moorish-influenced interior. For a well-crafted cocktail, try Summerian Club (11-minute walk), a newcomer to the Bilbao bar scene and already considered one of the best in the city.

It is not the artistic character that elevates Meliá Bilbao above your usual luxury property, but how at home in Bilbao that character feels. It successfully fuses the city’s industrial history and its current post-modern aesthetic, as if the hotel were rearranged from the foundations of the colossal shipyards that once stood nearby. And though it is lacking in some of the lavish indulgences expected of a five star hotel, its singular atmosphere, outstanding service, and stylish amenities—including the open-air pool and to-die-for cuisine—all give Meliá Bilbao an industrial-chic edge that rivals the rest of them.

#2 The Best Hotels in the Basque Country for Art Lovers

#4 The 10 Best Hotels for Foodies in the Basque Country