Azoreans have always had a strong connection to cattle. In the 1400s, when the Portuguese discovered the nine volcanic islands and decided to settle them, they first left a bunch of livestock to see if they could survive—after all, the rocky terrain seemed somewhat uninhabitable. When the explorers returned a few years later and saw the cows thriving, they began to settle the islands, which became known as the Azores (or Açores in Portuguese). Located in the middle of the North Atlantic Ocean, about 1,000 miles from Lisbon, the Azores are known for having more cows than people. And in the middle of those nine islands lies Terceira, one of the largest islands in the archipelago—at a mere 154 square miles.

Today, Terceira is home to about 56,000 people and twice that many cows, including the rare (and now protected) caramel-colored Ramo Grande breed, which arrived with the very first settlers. The Azores is responsible for almost half of Portugal’s dairy production, and the “happy cows,” as locals call them, can be seen grazing all over the island—grass-fed is a given here and barns are unheard of.

“The mild climate and excellent weather conditions allow the cows to live outdoors all year round, free to roam pastures and fields surrounded by volcanic stones and some of the most beautiful views of the islands,” says tour company Azores Getaways’ Terceira guide, Marina Nunes, who grew up on the island.

From weekly bull runs to tasty fresh cheese to Portuguese style beef stew called Alactra, it seems like everything here revolves around the bovine. Happy cows aside, Terceira has some truly spectacular natural wonders, a fascinating history, and a culture all its own. Take a look at why this Azorean island needs to be on your must-visit list. 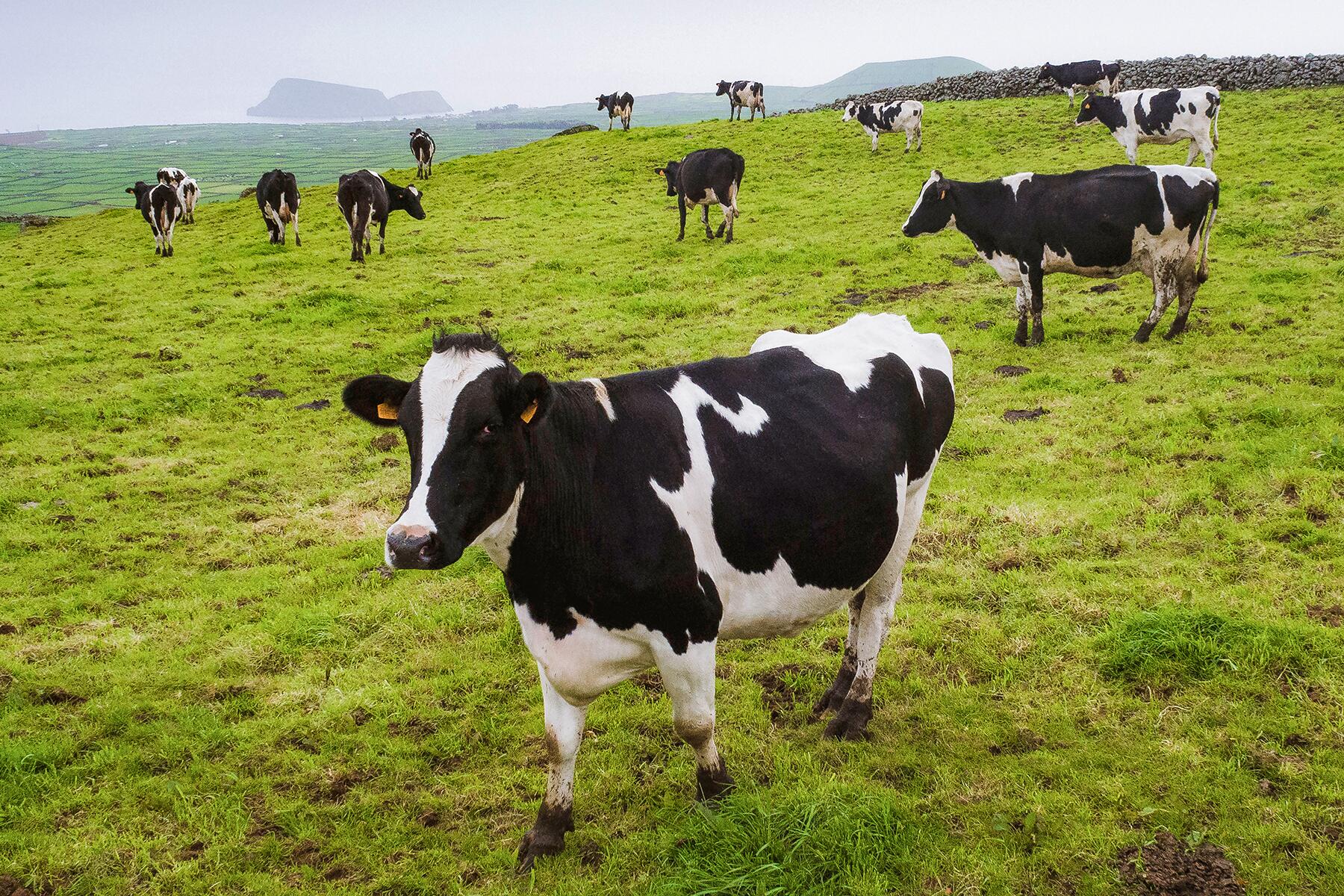 Dairy Is a Way of Life Here

Vegans beware: dairy production is one of the top two industries on Terceira (the other is beef). The Azores specializes in dairy products like milk, yogurt, butter, and cheese, with each island, including Terceira, making their own style of cheese. Cheese here is semi-soft, with a creamy texture and if it’s aged, a sharp flavor. Head to the market to buy a wheel, order a cheese plate at almost any restaurant, or visit the factory of the largest producer, Quiejo Vaquinha. And if you crave ice cream, cow-focused cafe Quinta dos Açores is sure to win you over.

INSIDER TIPBook a farm stay on Terceira with Azores Getaways and get a behind-the-scenes tour of Quiejo Vaquinha. 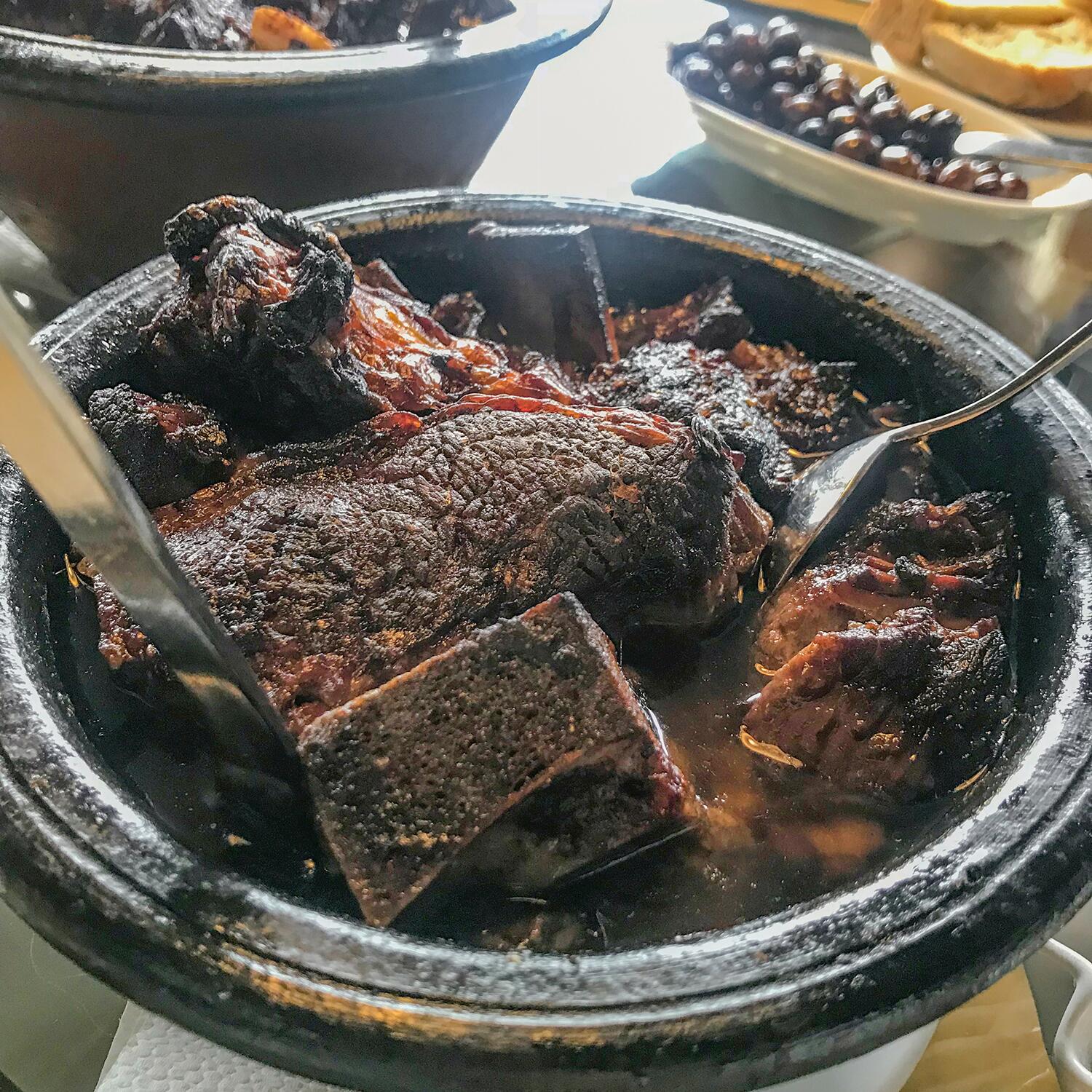 Try the Wine and Beef at the Same Time

While most of Terceira’s land is given over to cows, there’s also a healthy portion allocated to vineyards. Alcatra is the island’s famous wine-braised beef stew, made from local beef and white wine. Cooked in large, unglazed clay pots (like cast iron pans, they absorb flavor and each use adds to the seasoning), chunks of bone-in beef are combined with onions, bacon, white wine, and spices like allspice, black peppercorns, and cinnamon, and cooked for upwards of six hours. Bom apetite! (That’s Portuguese for chow down!)

INSIDER TIPTry Alcatra at several traditional restaurants on the island like Ti Choa or Sabores do Chef. 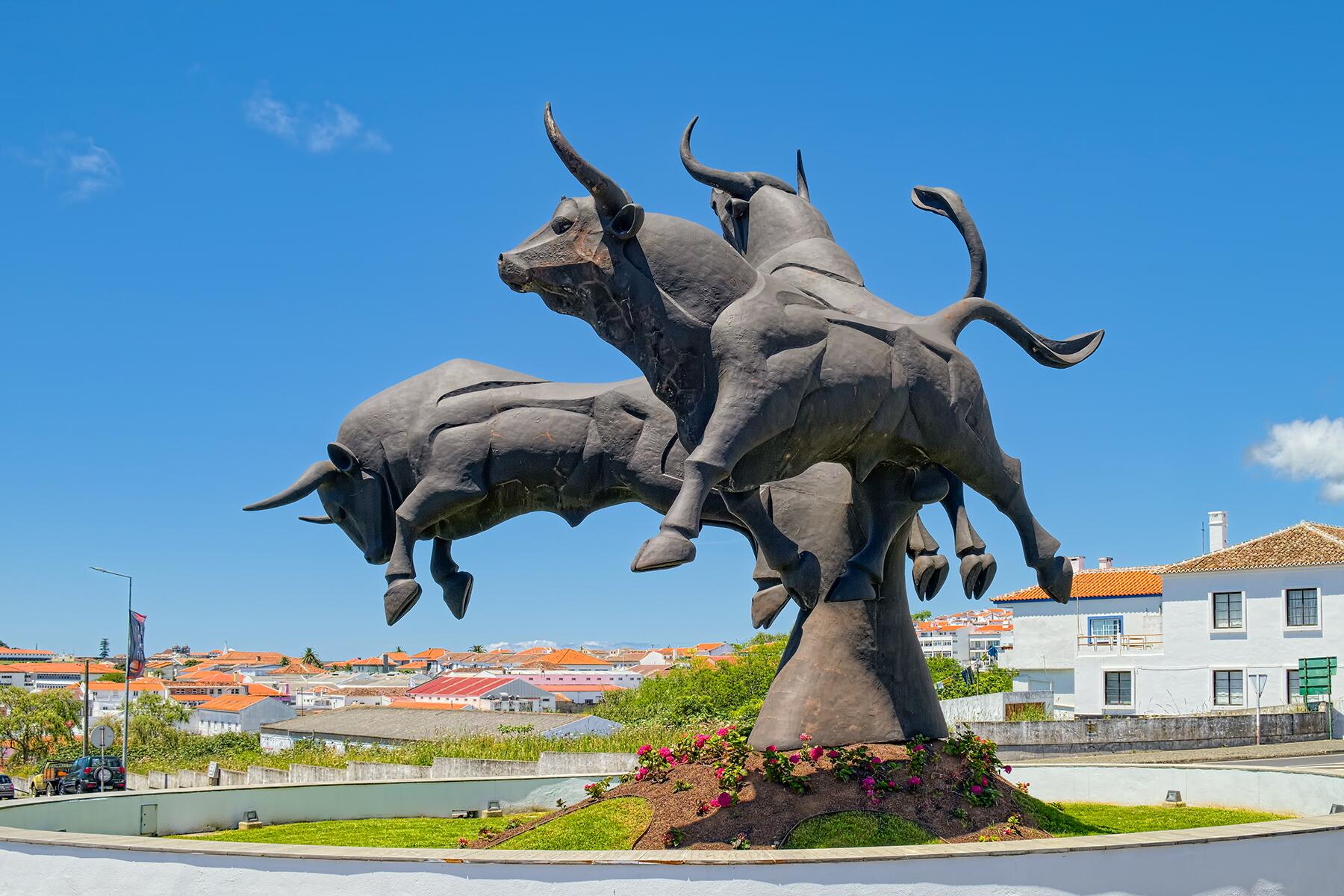 Upon entering the capital city of Angra do Heroismo, you can’t help but notice the gigantic metal sculpture of raging bulls. “As a form of fun, the people of Terceira began to use the bulls for entertainment, which is how the great tradition of the Touradas à Corda (which roughly translates to ‘Bullfights by Rope’) was started, explains Marina Nunes, Azores Getaways’ Terceira guide. “These traditional bullfights take place all around Terceira Island between the months of May and October. Each city and village around the island hosts their own festa (party) and bullfight, so there are more than 200 of these bullfights per year.”

Revelers gather on balconies and in the streets as a muscular bull is let loose. The bull has a very long rope around its neck and is (somewhat) guided by several village men. But of course, the people are no match for the bull and as men tempt fate by running in front of the large animal, many are injured (and some are even killed) each year. It’s very important to Terceirans that the bull is not harmed, however, and he is never poked or prodded.

INSIDER TIP: If you’re too nervous to attend in person (if you do, we recommend going up on a balcony for safety reasons), step into almost any souvenir shop and you’ll see videos of the bull runs playing on small television sets above the cash registers. Be warned: the videos are graphic and show people getting inured. 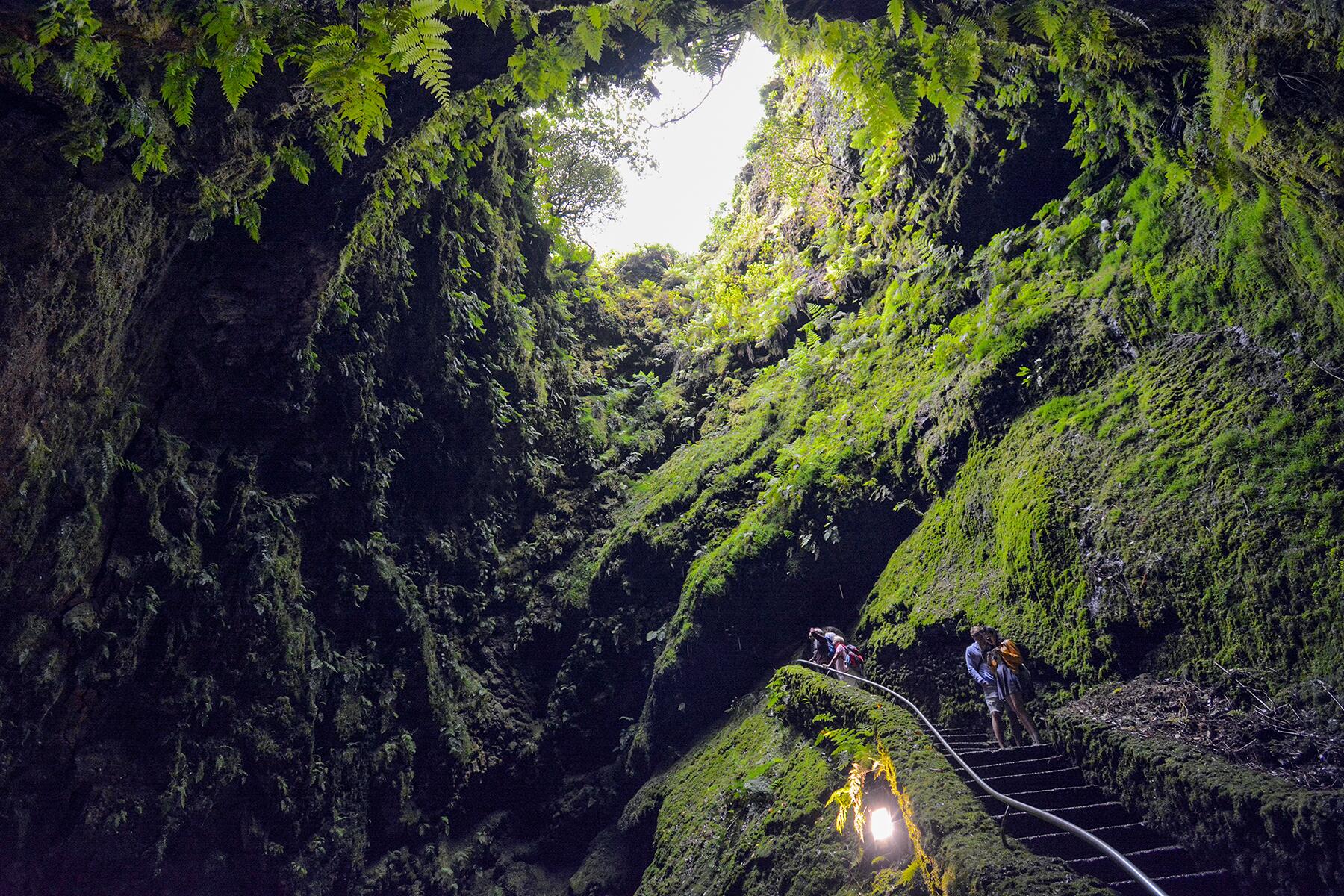 Go Inside a Volcano

Terceira is home to the one of the world’s few volcanoes that you can descend into: Algar do Carvão. When you enter through the now-dormant volcano’s chimney, look up to the sky out of the lush, plant-lined cone. Hike down to the bottom and you’ll see a clear rainwater lake that’s surrounded by stalactites and stalagmites. Another volcanic attraction open to visitors is Gruta do Natal, a dark, hardened lava tube that you can walk through and explore—claustrophobics may want to stay away. 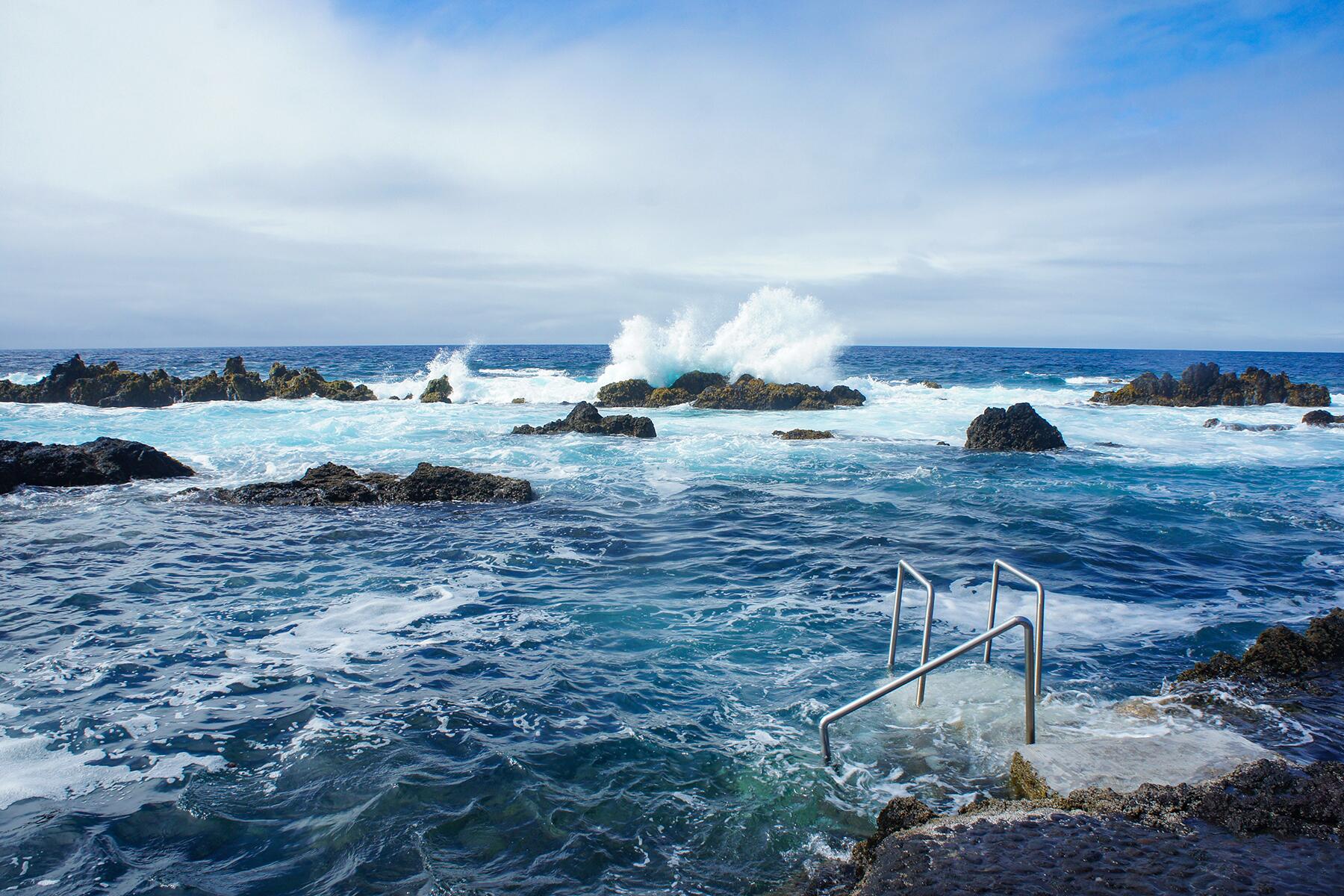 Take a Dip in the Atlantic Ocean

Beaches on Terceira are rocky and full of dramatic, crashing waves. But locals have built concrete platforms for sunbathing and rocks protect the swimming area so the water there is actually calm—albeit frigid. The island’s most famous beach is called Biscoitos and during summer afternoons it’s packed with locals who head there as soon as they get out of work and school. 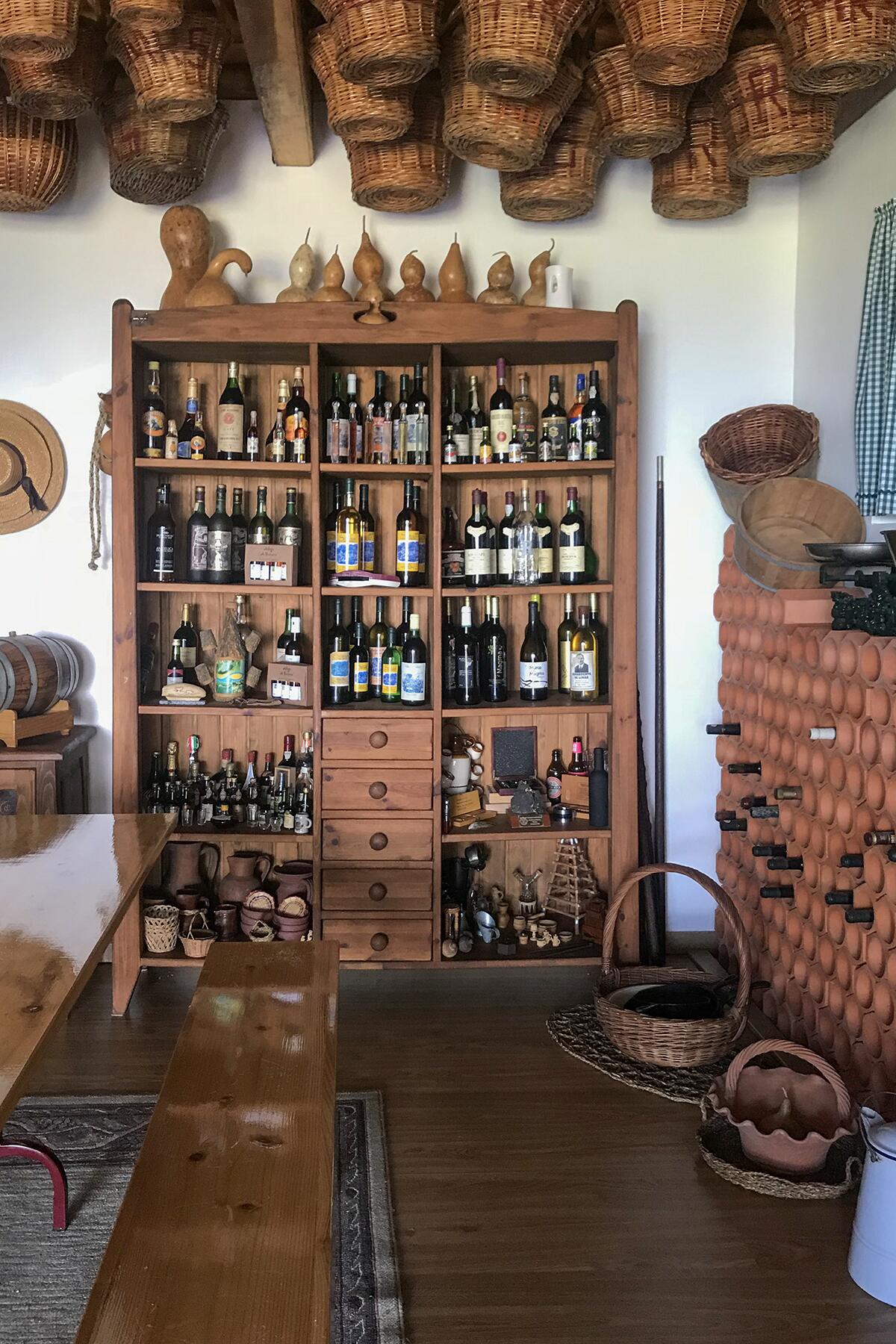 Winemaking is a popular pursuit in the Azores, with many islands growing their own grapes on unique volcanic stone terraces. On Terceira, Adega Simas (adega means “wine cellar” in Portuguese) is the charming home/winery of Paulo Simas and his family. He brings glass after glass of wines to sample before getting to the real goods: his homemade aguardiente liquor. Instead of grapes, these are distilled from locally grown produce like blackberries, lemons, and fennel. Saúde! 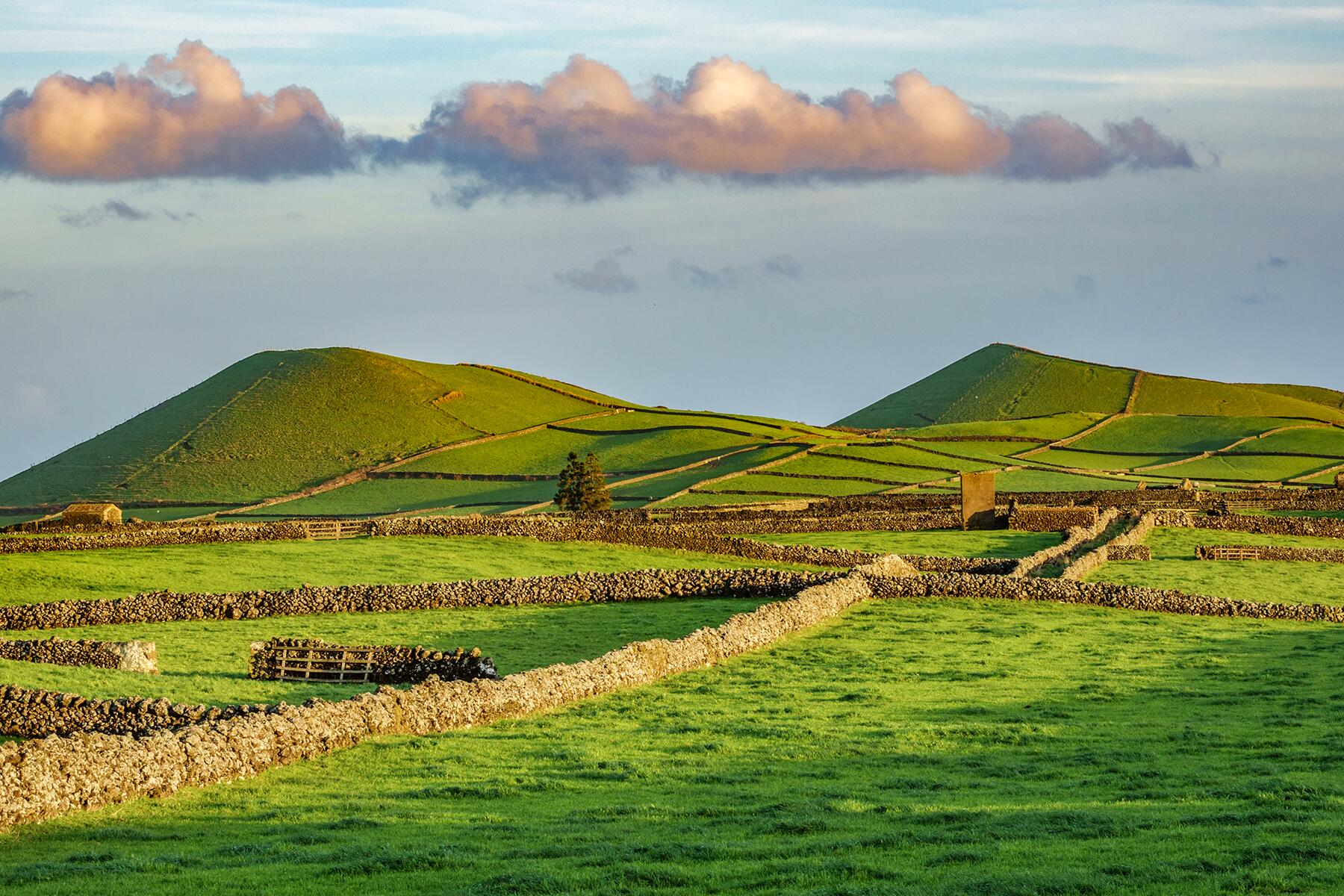 The Azores were formed when volcanoes under the Atlantic Ocean erupted, creating the nine islands. When the Portuguese arrived on Terceira in 1450, the island was covered in volcanic rocks. Instead of returning to their ship, they began to clear the rocks, stacking them as they went. They eventually made thousands of low walls that became property dividers. While many of the original walls have fallen (the Azores are also prone to earthquakes), some still remain, while new ones continue to be built. 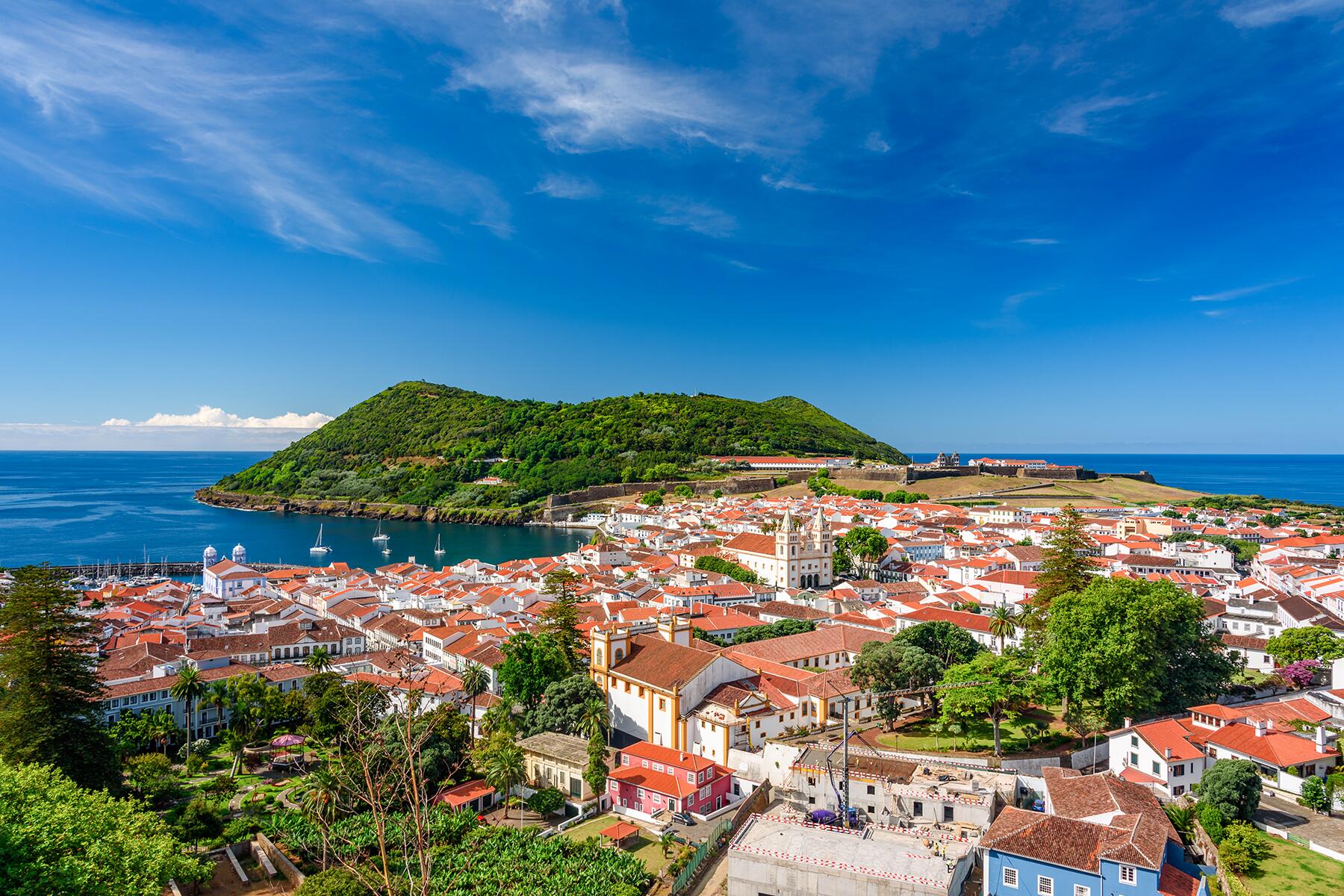 Stand on the Island That Was Once All of Portugal

In 1581, the Spaniards conquered Portugal. They soon made their way to the Azores, conquering it too, island by island. But when they got to Terceira, the capital city of Angra do Heroísmo was ready, and mounted a counterattack that held off the Spanish. Cattle were actually a major part of this victory: after hours of fighting, villagers released 1,000 angry bulls onto the beach, killing hundreds of Spaniards and driving the rest back to their ships. For two years, the entire country of Portugal was Terceira, with the king residing there, until they too finally succumbed to the Spanish in 1583. Today, the city is a UNESCO Heritage Site. 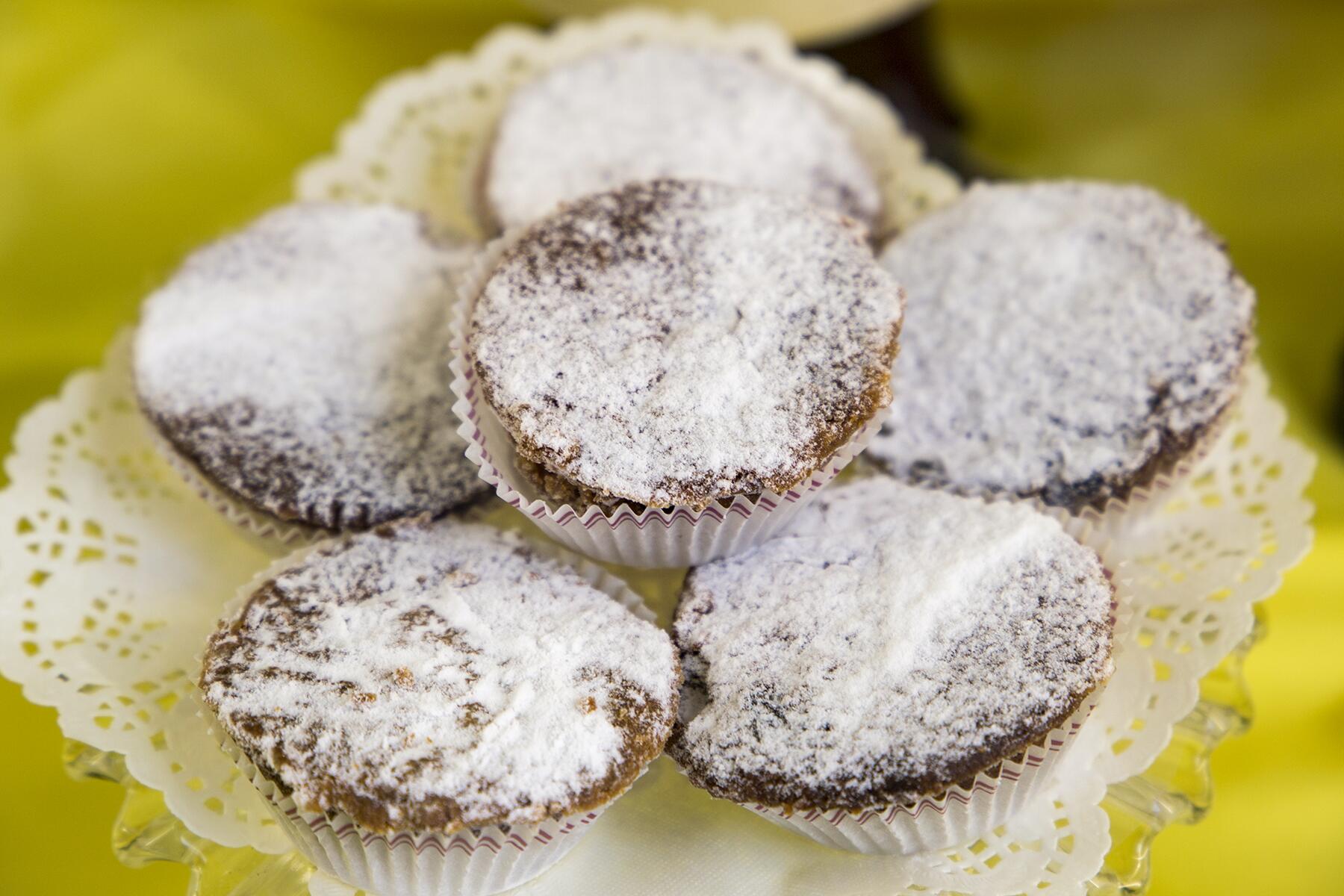 Terceira’s legendary (and delicious) Dona Amelia cake—actually a small pastry—was created to welcome Portugal’s Queen Amélia and King Carlos to Terceira Island in 1901. The chewy, spicy treat uses spices like cinnamon, which landed one the island thanks it being a stop for Portuguese boats traveling to India and the Far East.

INSIDER TIPTry the Dona Amelia, along with other local delicacies, at the famous O Forno bakery, in Angra do Heroísmo. 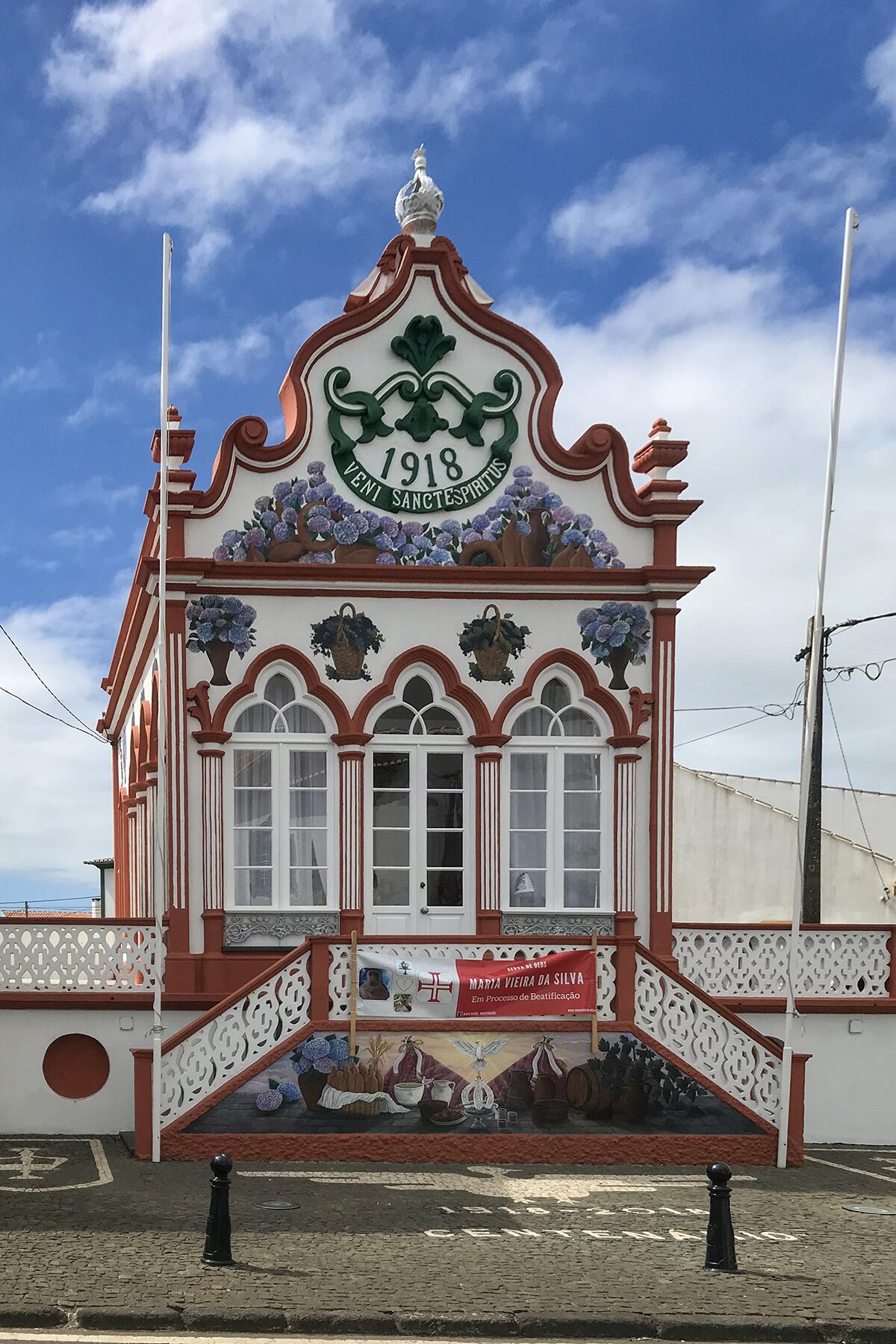 Terceira is covered with mini chapels, called Imperios, which honor the holy spirits—every village has one adjacent to its church and they are always bright and cheerful. A photogenic favorite is the 100-year-old Império do Espírito Santo de São Sebastião, which is painted in purple hydrangeas—flowers that are almost as ubiquitous as cows on the island.