This November, Fodor’s traveled north to Reykjavik to capture the soul and sounds of Iceland Airwaves, the country’s preeminent musical event.

Starting in an airplane hangar in Reykjavik in 1999, Iceland Airwaves has continued to grow and expand since its infancy. Past years have brought to the stage Icelandic natives Björk, Of Monsters and Men and Mammút, plus varying acts from all over the world: PJ Harvey, Yo La Tengo, Beach House, and more.

What made this year unique, aside from headliners Fleet Foxes and Mumford and Sons, was the festival’s expansion to Akureyri, a small town 380 kilometers from Reykjavik, and the capital of North Iceland. This year of Airwaves also marked the first-ever “Earth Waves”—a concert in a geothermal pool surrounded by the mountains, with performances by Emmsjé Gauti and Young Nazareth.

We had some clear favorites this year: Mighty Bear, who represented the Reykjavik drag scene with his outstanding stage presence and wardrobe; We Made God, who brought the house down the first night of the festival; delightful and energetic pop artist Hildur, dj. Flugvel og geimskip (Airplane & Spaceship); Mammút (the entrancing spectacle of their live show cannot be overstated); the incomparable Sóley; and so many more. Watch our highlight reel and try not to get too much #FOMO, or just book your tickets for next year. 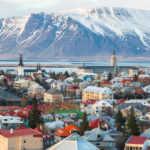 If you can’t make it as far as Iceland, a new festival in Portland, Maine, called Sunaana, showcases Icelandic artists in a similar climate. The festival will enter its second year this March.