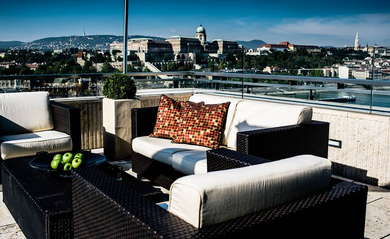 The hotel building is rather boring from the outside but it hides a cunning secret: its T-shape and prime location on the Danube mean that all of the rooms have breathtaking views across the river. And not just the rooms. Gellért Hill, the Chain and Elizabeth bridges, and Castle Hill are visible from almost every aspect, including the lobby, ballroom, and even the fitness center. Alongside all of this, there's the standard North American-style hospitality that you would expect from the Marriott chain--this property was the chain's first in Eastern Europe.

Newly renovated rooms are actually surprisingly funky, in modern greys with bright flashes of color. Some have balconies, and others have attractive seating areas by the windows to properly showcase those amazing views. All are large, with a host of amenities, kingsize beds (or twins), desks and soundproof windows.

YOU SHOULD KNOW In-room WiFi is only available in some rooms for an added fee.

Bathrooms are not huge, but there are clever touches - like the lights under the sink that can be left on to guide late-night visits without disturbing your bedmate. There's a mix of showers and bathtubs, or both, depending on room type.

The hotel lobby is huge, with low ceilings and windows that overlook the Danube. Despite this, the combo of red carpets with swirling patterns, yellow and red chairs, and dark wooden panels manage to feel quite inviting, particularly as the sun sets over the river. It's due for a refurbishment soon, though, which might bring it a bit more up-to-date.

There's a jacuzzi and sauna.

No basement gym rooms for this Marriott: the fitness center overlooks the river. There are yoga classes too, which are free for guests.

Peppers! Mediterranean restaurant is due for a refurbishment next year, which is a good thing, as it feels a bit 90s at the moment. The food isn't bad, though. Breakfast - buffet, continental, or American - is comprehensive and tasty, but expensive if it's not in your room rate. The Lobby Cafe is vast but comfortable.

There's a cute explanation of pálinka - a Hungarian fruit brandy - on the menu ("the coffee of the poor" is geographically protected, like champagne). It would be rude not to try it while you're here.

AQVA bar boasts the river views and a chilled vibe throughout the day. It's open until 2 am.

The riverside hotels are among the best located in Budapest, for our money: great views, plus you are between the sights of both sides of the city, Buda and Pest, and can walk to either. For trips further afield, there's a metro stop nearby.

Why not cafe and bar (12-minute walk along the river) is a cool, gay-friendly bar with a good attitude towards life (the clue's in the name). For more inventive naming, and great cocktails, try Warm Up Cocktail Bar (18-minute walk).

Views, views, views, of the lovely Danube, from almost every angle and certainly every room. That's us sold, and then there's the fact that the hotel meets all of the Marriott's international standards for comfort and professionalism. Not bad at all.