Greece is at the heart of cruise action this summer.

If you’re dreaming of finally getting away from it all and doing absolutely nothing but enjoying endless views of the sea with visits to some of the most popular Greek islands, then you’re in luck. In a little under a month, most of the world’s largest international cruise companies announced that they would be sending their ships to Greece and Cyprus this summer.

Implementing health and safety protocols tried and tested last year, Greece is among the first countries to reopen to all travelers as of May 15, including Americans who haven’t be able to enter the country since March 2020 when the coronavirus pandemic broke out.

Why Are Cruise Ships Heading to Greece?

Well, for starters, besides opening to tourists, Greece is among the first countries in the world to allow cruise ships to sail its waters, which is great news for companies that have kept their ships still for over a year. And, according to cruise industry insiders, people want to sail.

At the same time, in an attempt to re-ignite interest and restore trust, cruise companies are not only offering flexible payment, refund, and booking options, they have also slashed prices and are offering free rebooking for departures in 2022.

For some, traveling or taking a cruise sounds risky, particularly in view of the COVID-19 developments. For Greece however, which relies heavily on tourism, reopening to travelers is critical and cruise companies are welcoming the decision to allow their ships to service out of the country.

At the same time, Greece welcomes the interest and arrival of global cruise giants after repeated efforts in the past few years to establish Greek ports as homeports, which would significantly increase revenue generated by passengers.

That said, at least two of the world’s leading cruise companies will be homeporting from Greece this year for the first time.

Greece has traditionally—together with Italy and Spain—been among the top three destinations for cruise travel in Europe.

The Eastern Mediterranean has always been a major attraction for cruise travelers thanks to its rich and diverse culture, and particularly Greece and the Greek islands for their color, food, and sites.

Until now, cruise ships mainly passed through Greece, accepting passengers from other ports in Italy, France, and Spain. Which meant that a traveler would have to embark on their cruise to Athens and the Greek isles boarding from another country.

Starting this year, however, all major cruise lines will homeport in Greece, which means that travelers can start their cruise to the Greek islands and Cyprus right out of Greece. New homeports will operate in Piraeus and Lavrion (serving Athens), Heraklion (serving Crete), Corfu (which is near Italy), and Thessaloniki (Greece’s second-largest city near the country’s northern border).

What’s more, besides the ever-so-popular Greek islands of Santorini and Mykonos, cruise lines have now added new off-the-beaten-track destinations to their itineraries making the idea of cruise travel all the more attractive.

The dozen or so companies operating out of Greece this summer will sail to Crete, Rhodes, Mykonos, Patmos, Katakolon (to visit Ancient Olympia, where the first Olympic Games were held in antiquity), and Santorini—which are all traditional cruise stopovers—adding this year such stops as Nafplion, Corfu, Zakynthos, Paros, Syros, Spetses, Agios Nikolaos on Crete, Skiathos, Volos, Kavala, Milos, and Gytheio in the Mani peninsula. Ships will also travel to destinations in Cyprus (Limassol) and Israel (Haifa).

Besides being able to board from Greece, this year travelers will also have a wider choice of cruise ship options. You can select a luxury cruise company, an ultra-luxury cruise ship, or even a much smaller vessel for your cruise experience. 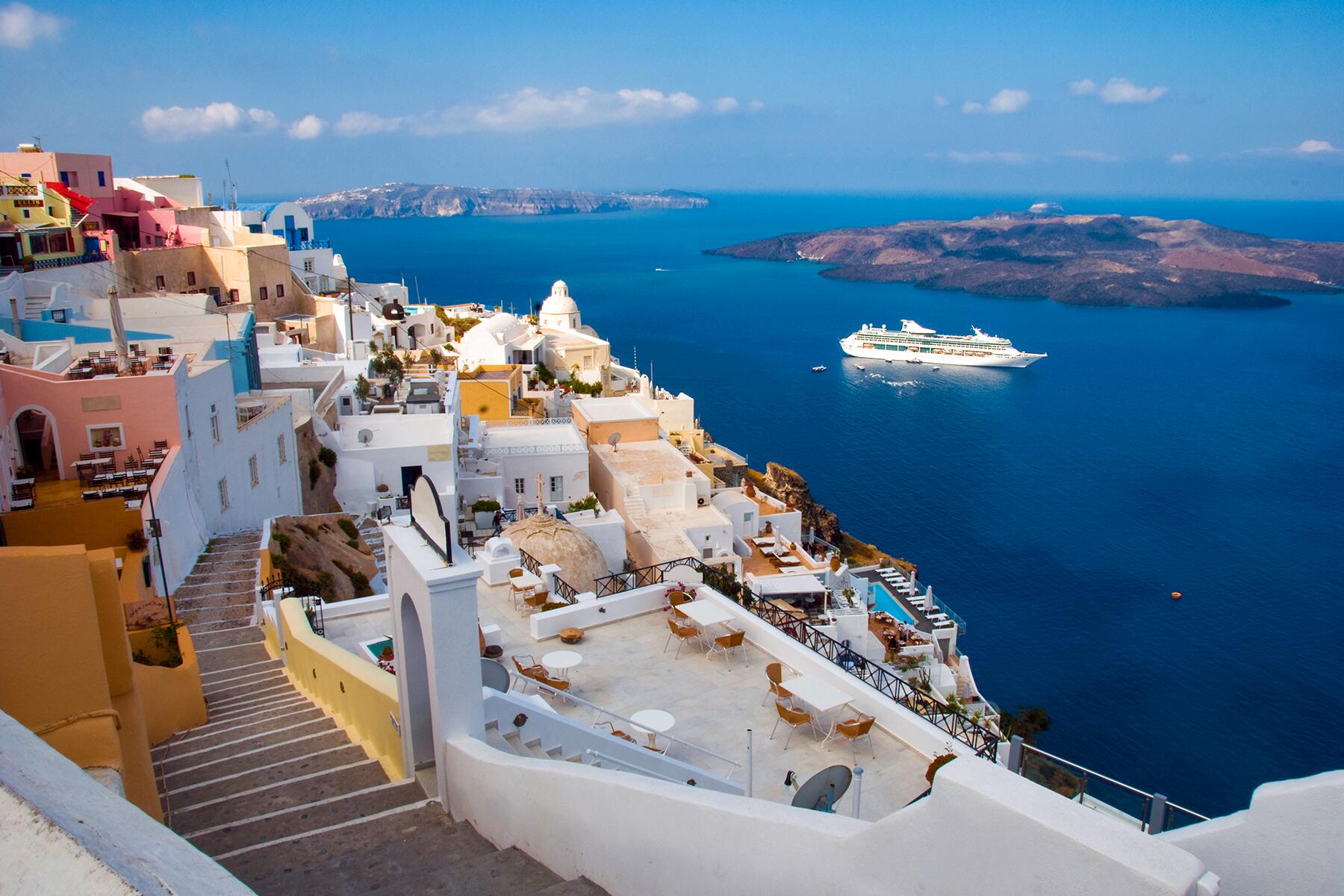 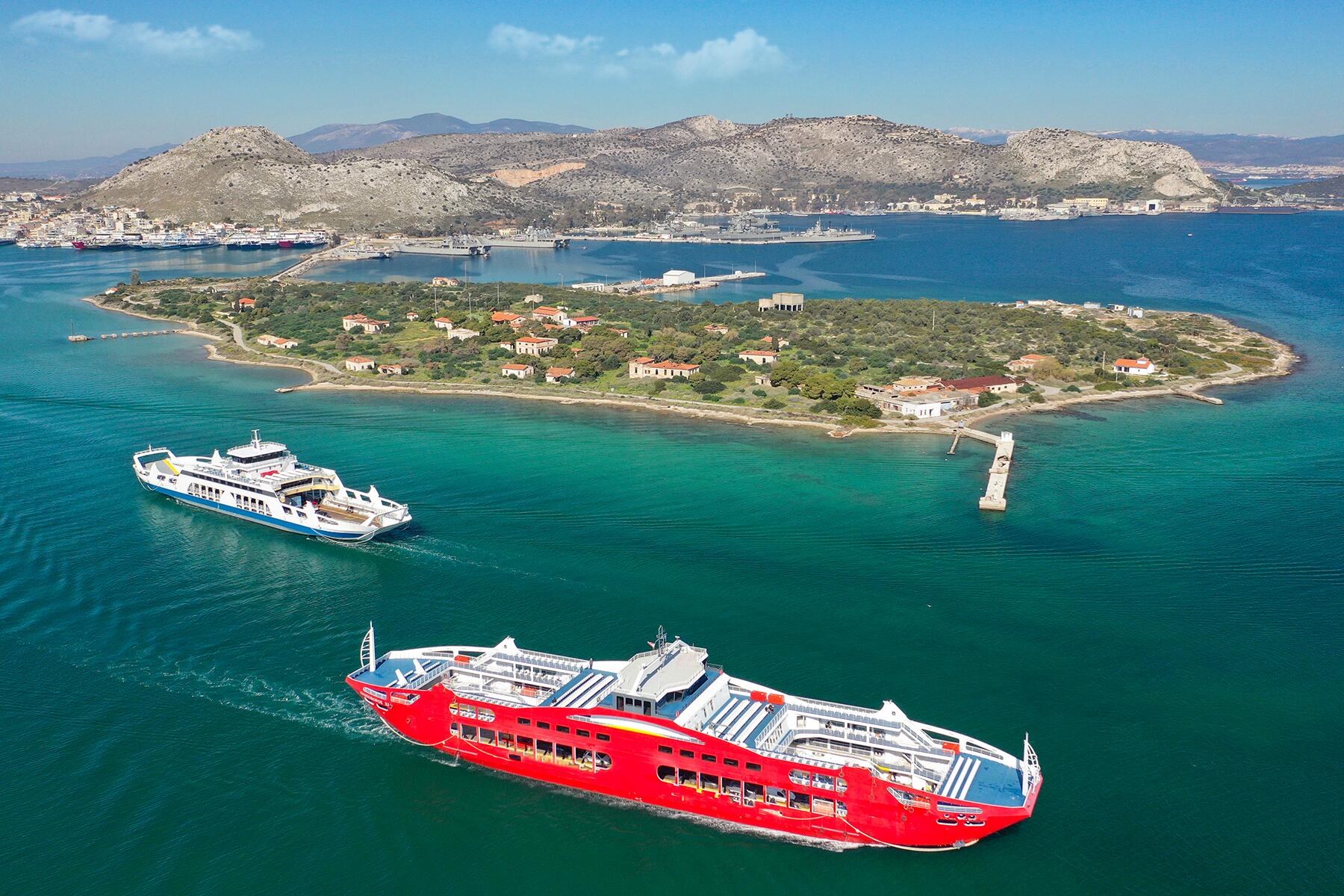 At the same time, boutique cruise companies that operate smaller ships that offer intimacy and exclusivity are seeking alternative, crowd-free destinations. These ships, which already sail with significantly fewer passengers, are ideal because, due to their size, they can approach remote Greek islands and anchor at smaller ports.

Announcing 2021 itineraries, many companies also confirmed that they will be remaining in the region for 2022 demonstrating their intention to establish Greece as a major homeporting destination in the Mediterranean, which is also in line with the Greek government’s plans to prioritize maritime tourism. One such case is Royal Caribbean, the world’s second-largest cruise company, which has for the first time sent its “Jewel of the Seas” to homeport out of Cyprus and serve the Eastern Mediterranean.

Cruise Travel: How Will It Work?

So how will cruise travel in the Mediterranean be carried out post-COVID? Cruise companies insist that travel at sea is perhaps the safest and cleanest option due to the stringent safety, health, and sanitation protocols already in place on board even before the emergence of the virus.

The companies have, for the past year, followed the recommendations of safety and health experts and have expanded their existing protocols with additional layers of protection.

Some companies accept only vaccinated passengers (Celebrity, Royal Caribbean, and NCL), others are requesting a negative PCR test result 72 hours before embarkation, and a number of companies will be requesting that those under 18 test negative before boarding.

If you do decide to take a cruise this summer this is what you should expect: you can enjoy onboard amenities, eat only served meals at the ship’s dozens of restaurants, and enjoy drinks at the bars. You can also participate in cultural activities and sports on board.

One major change, however, is that you can’t disembark at any port on your own unless you’re traveling on a vaccinated-only cruise. Instead, this year’s visits to the shore will be organized exclusively by the cruise company, which has also tested vendors, guides, drivers, and service providers at the ports of call in order to ensure safety on board and limit the possibility of infection.

Additionally, you should have in mind that:

Of course, cruise companies don’t promise there will not be a virus incident on board but they point out that it will most likely be rare, and should it happen all the necessary precautions and measures are already in place to handle the case effectively and immediately.

Up until the standstill caused by the pandemic, cruise travel was one of the fastest-growing tourism industry sectors, reporting almost 30 million cruise passengers in 2019.

Earlier this year, during a teleconference with Cruise Lines International Association (CLIA), Greek Tourism Minister Harry Theoharis underlined the importance of cruise travel for Greece, adding that in 2020 Greece played a key role in the global resumption of cruise travel.

“Cruise, as one of the main forms of tourism for our country, is very important for the Greek economy. Therefore, it is necessary to maximize cooperation and efforts in order for cruise travel to open safely as soon as possible,” he said.

On May 13, with the Temple of Poseidon dedicated to the Greek god of the seas in the background at Cape Sounion, Theoharis announced the official launch of the tourism season, adding that “cruise companies have expressed significant interest in Greece this year”.