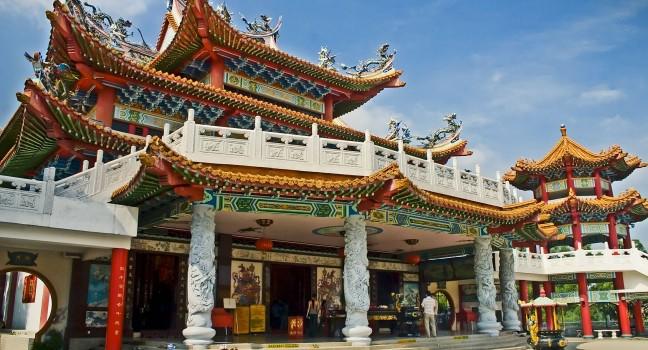 Located south of the city center, this six-tiered Chinese temple is dedicated to the Heavenly Mother, Thean Hou. Funded by donations from within the Malaysian Chinese community, the temple opened in 1989. Inside and out, it's a riot of color—lots of red (symbolic of prosperity), shades of green from lime to celadon, and gold roofs with upturned eaves topped with intricate dragons and phoenix statues. From the upper decks, you can take in the Kuala Lumpur skyline, or pay a visit to the wishing well, medicinal herb garden, and several souvenir and food stalls. Though you'll get better photos during the day, the temple is also lovely at night with its brightly lit paper lanterns. The closest monorail station is Tun Sambanthan, but from there it's still nearly a half-hour walk, so it's easiest to take a taxi straight from the city center.