As far as food towns go, few cities can go toe-to-toe with Tokyo. The width and breadth of variety, styles, and variations upon those styles are so staggering as to be infinite. You could eat a different genre of food for lunch and dinner for four days (more if you take into account the types of foods not included in this particular list) before you’d have to entertain the idea of doing a repeat. If you’re looking to make your epicurean tour of Japan’s capital city, here’s what you should be eating and where. 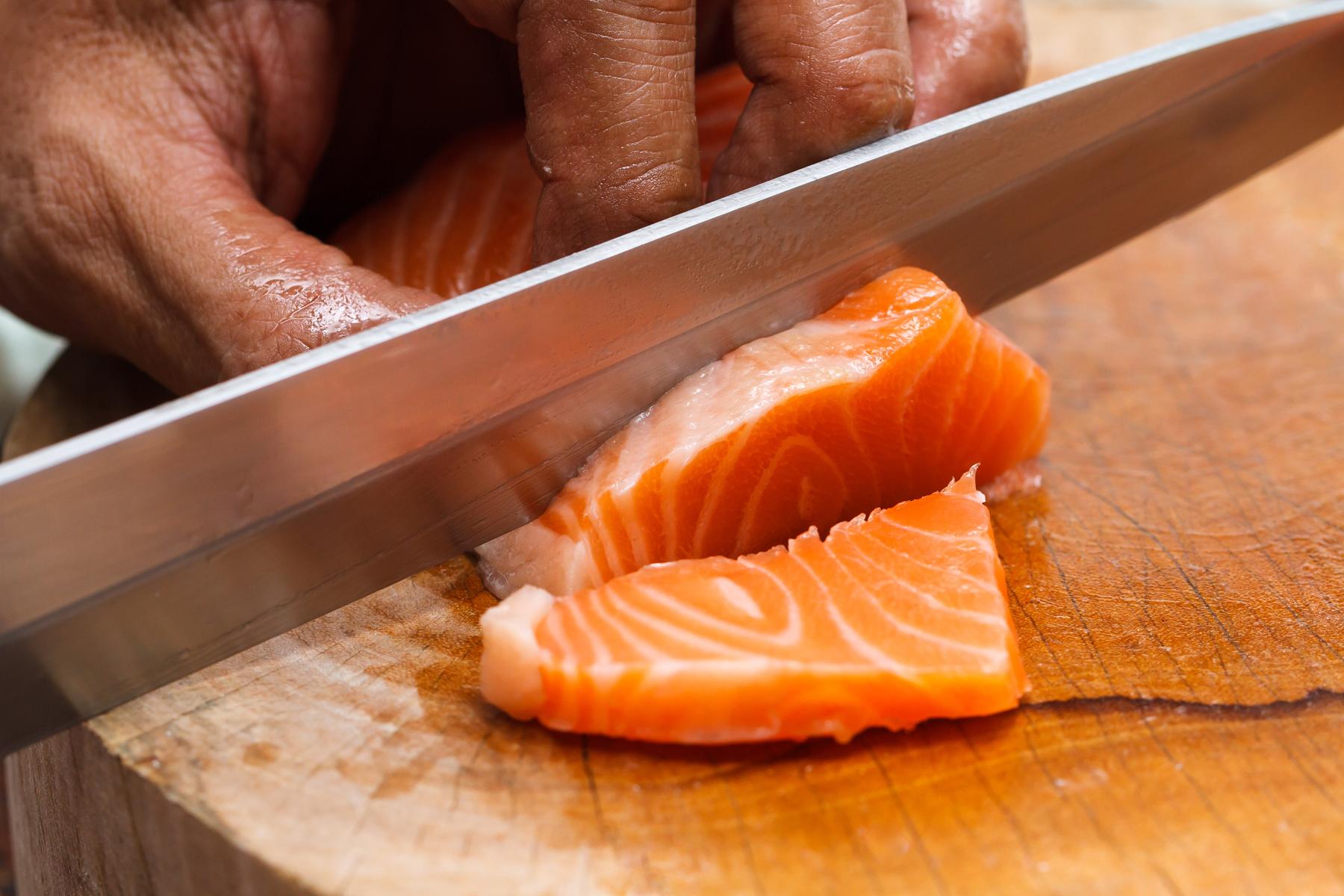 It practically goes without saying that you’d be remiss without sampling sushi, the most well-known genre of Japanese cuisine. Raw seafood is carefully selected and expertly prepared with rice and served alongside ginger, wasabi, or soy sauce. In a way, sushi is representative of many of Japan’s signature foods: a few ingredients that can be chosen from a wide variety of options that nonetheless demand the utmost consideration and expertise in their preparation.

You’ve no doubt seen images of the famous Tsukiji fish market, with its acres of fresh seafood and rows of tuna-laden palettes waiting to be bid on in the early morning hours. While it is no longer technically the “Tsukiji” fish market (it moved to a new location in Toyosu at the end of 2018), it still maintains its distinction as the world’s largest fish market. If you’re interested in sampling sushi made from fish delivered from this famous market, stop by Tsukiji Tama Sushi. You’ll be able to sample a range of sushi including the suehiro tamaki, wherein ingredients are placed inside a sheet of nori that’s been rolled into a cone shape. Tsukiji Tama Sushi has the added benefit of not being too far from the Tsukiji outer market where retail vendors still operate, in case you’d like to stop by for an appetizer of delicious street food samples beforehand. 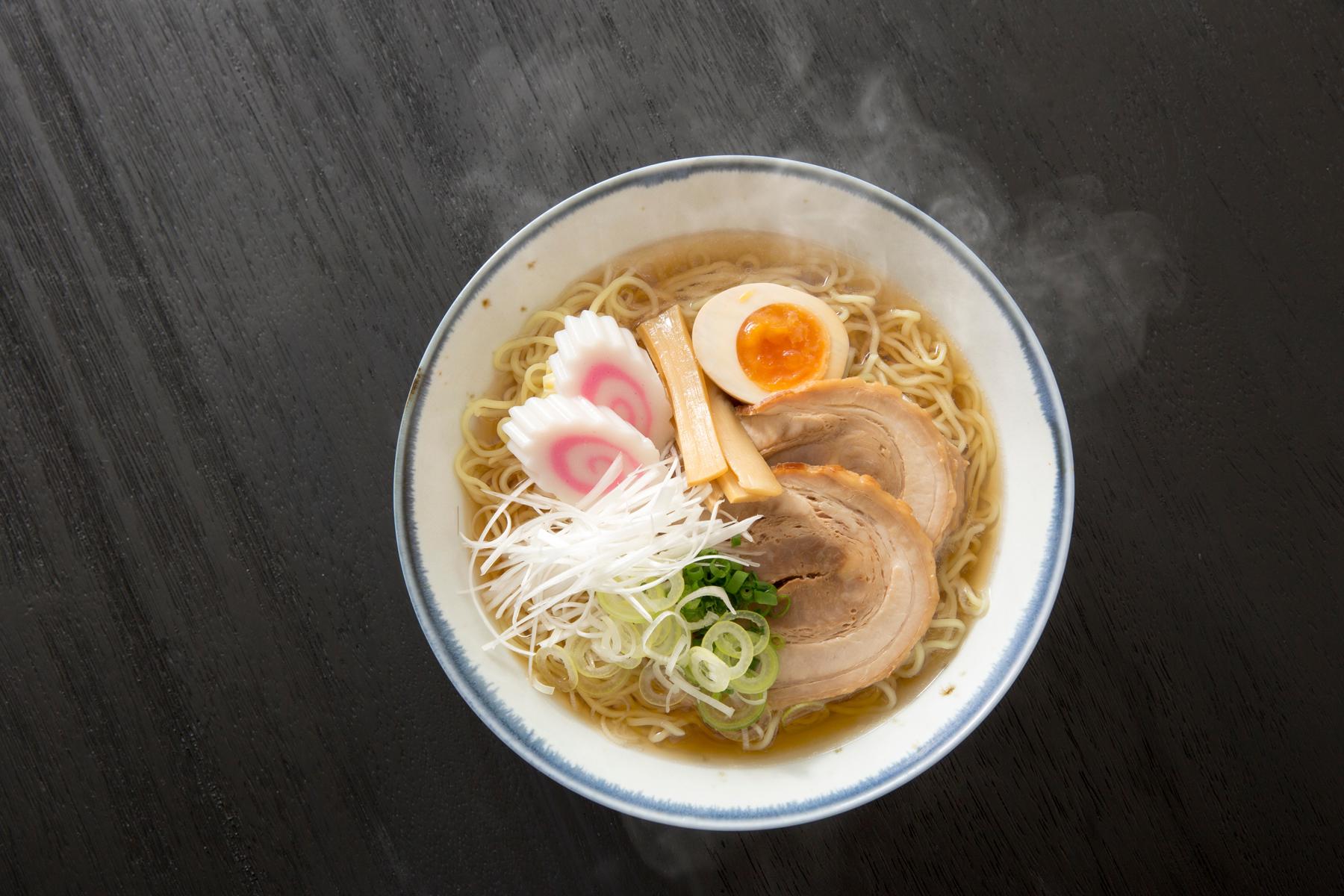 Though the dish’s signature wheat noodles were introduced to Japan by Chinese immigrants in the 19th century, ramen has come to be a hallmark of Japanese food culture. From the miso-based broth of Hokkaido to the milky-in-color pork bone broth of Fukuoka, each region of Japan has developed its own variation on the perennially popular soup.

The Shin-Yokohama Ramen Museum is probably more accurately described as a theme park as opposed to a literal museum. When you make your way through the street-level entrance, you’re greeted with a gallery about the history of ramen and a museum shop. But the main attraction is the basement level which has been designed to look like you’re in Tokyo circa 1958 (the year instant ramen was invented). The replica mini-city is complete with narrow corridors adorned with retro signage and a dagashi-ya (old fashioned sweet shops). But the main attraction is the central courtyard which plays host to a rotating cast of ramen restaurants that are invited from all over Japan (and now the world) to set up shop so that visitors can sample a wide array of ramen all in one place. 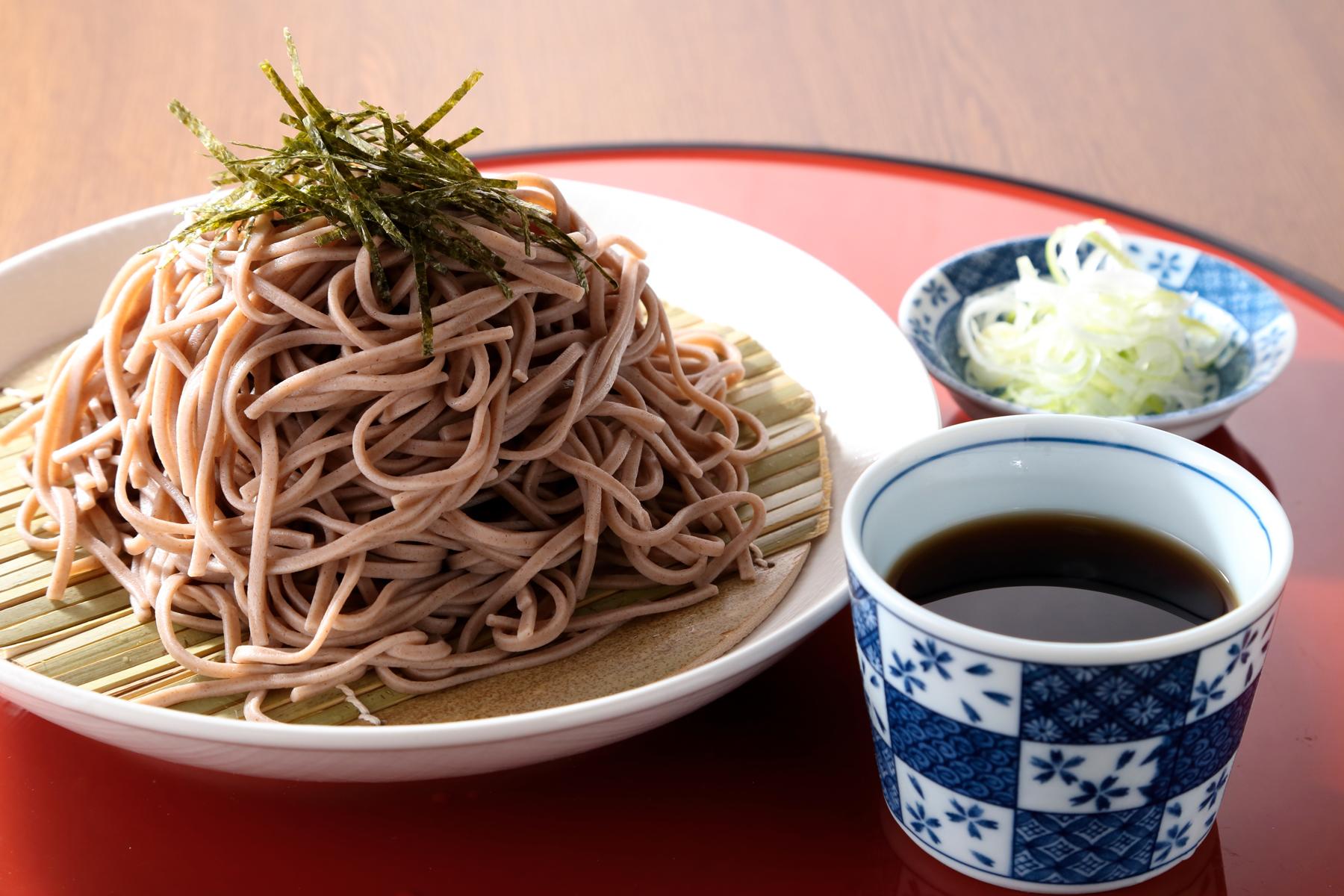 Soba (buckwheat) noodles can be served hot or cold. The hot version is served as a soup while the chilled versions are played on a sieve-like plate and dipped into a sauce. In addition to being delicious, soba noodles have the added benefit of having more nutritional value (they’re more digestible and contain antioxidants) than wheat noodles–so slurp (loudly) away!

Here’s the thing: all things being equal, food tends to taste better when you’ve put your own blood, sweat, and tears into its making. So if you’d like to know the delicious satisfaction of consuming your own lovingly crafted noodles, consider taking a soba making lesson! (Don’t worry! If you muck it up and your soba noodles end up being cut too thick and end up looking more like udon, you can sample some of the chef-made noodles to see how it’s really done.) Once you’re done, enjoy some matcha tea made with the starchy water used to cook the noodles.

INSIDER TIP In order to keep the dough from drying out, make sure to complete your noodle making process in 30 minutes. 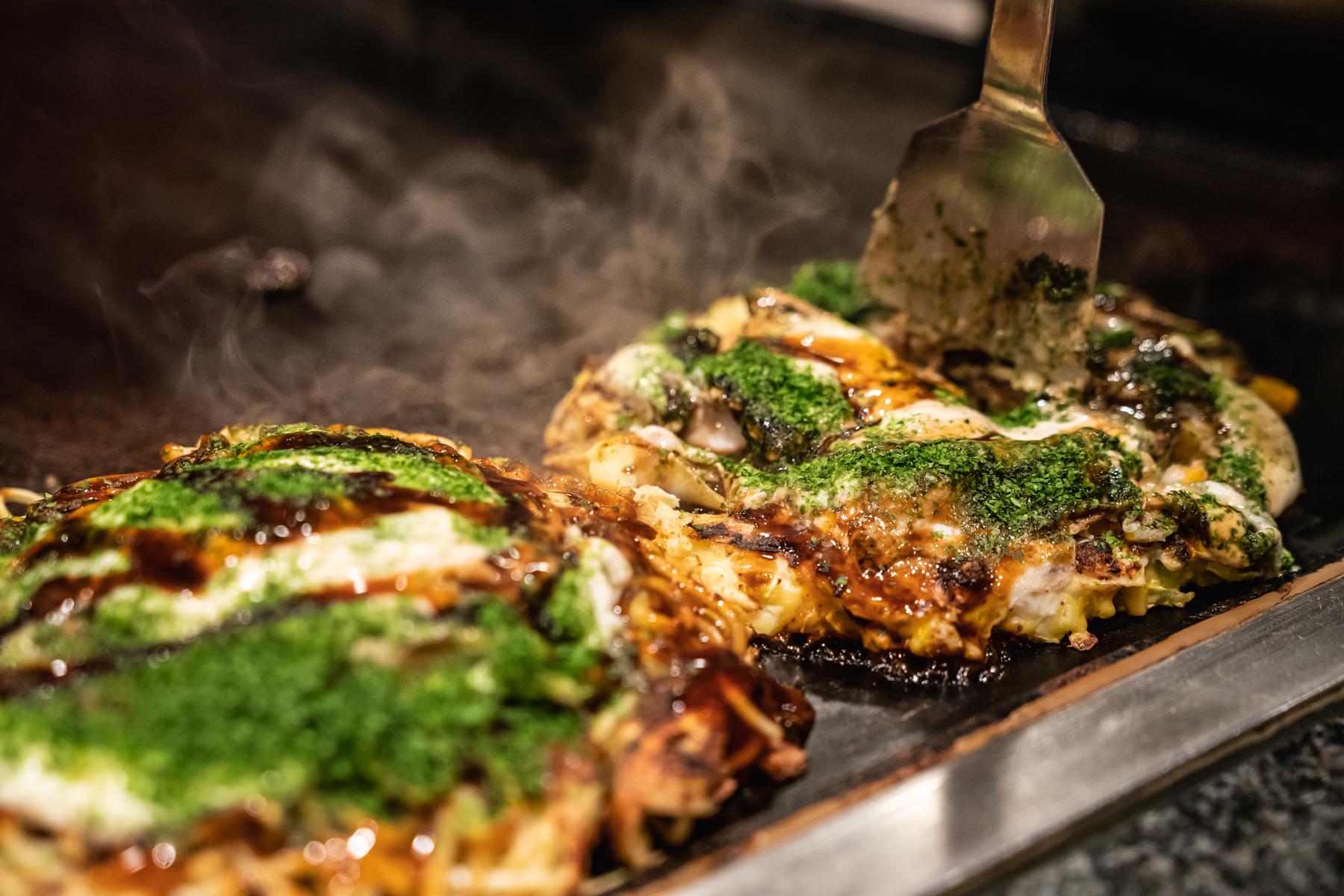 The beauty of okonomiyaki is right there in its name: “okonomi” effectively meaning “whatever you like,” and “yaki” meaning “grilled.” At its most basic, okonomiyaki is made with cabbage, flour, eggs, green onions, and usually some type of protein all mixed together and then shaped into a sort of veggie-based, savory pancake. And, as you might expect, given its name, there are numerous variations. There’s modan-yaki (okonomiyaki outfitted with a layer of fried noodles), monjayaki (okonomiyaki made with a batter that’s more liquid in its consistency), and Hiroshima okonomiyaki (where instead of mixing ingredients, you sandwich the fillings in between a crepe and a fried egg).

Grab a table (outfitted with a grill) at Saukra Tei in Harajuku and put together your ideal okonomiyaki. 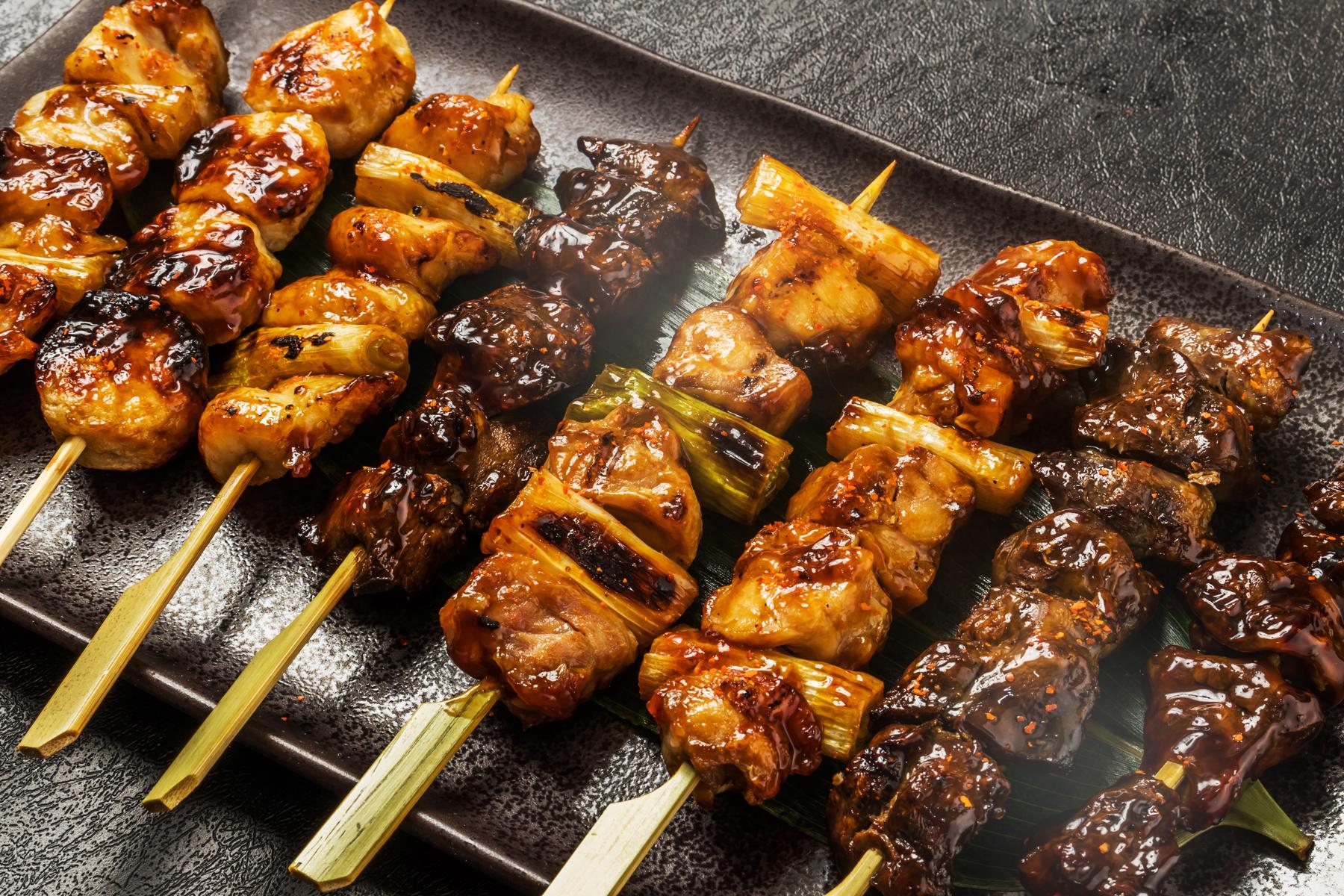 The beauty of yakitori is in its simplicity. Skewered chicken cooked over a charcoal grill and seasoned with a little salt and tare sauce. There’s a reason it’s a staple of late-night street food and izakayas. Not to mention the proliferation of the yakitori-ya, eateries that specialize specifically in serving skewered chicken parts.

For a perfectly calibrated Michelin-starred yakitori experience, visit Birdland in Ginza. The skewers at this restaurant (located underground near one of the exits for the Ginza metro station) are made with 100 percent jidori chicken, each piece is weighed so that it cooks evenly, and the seasonings are perfectly applied. It’s the perfect place to order a beer (or a glass of wine) and let the various skewers off the tasting menu wash over your taste buds in waves of charcoal-kissed bliss. Make sure to request a seat at the counter when making reservations so you can have a front-row view of the grilling in action. 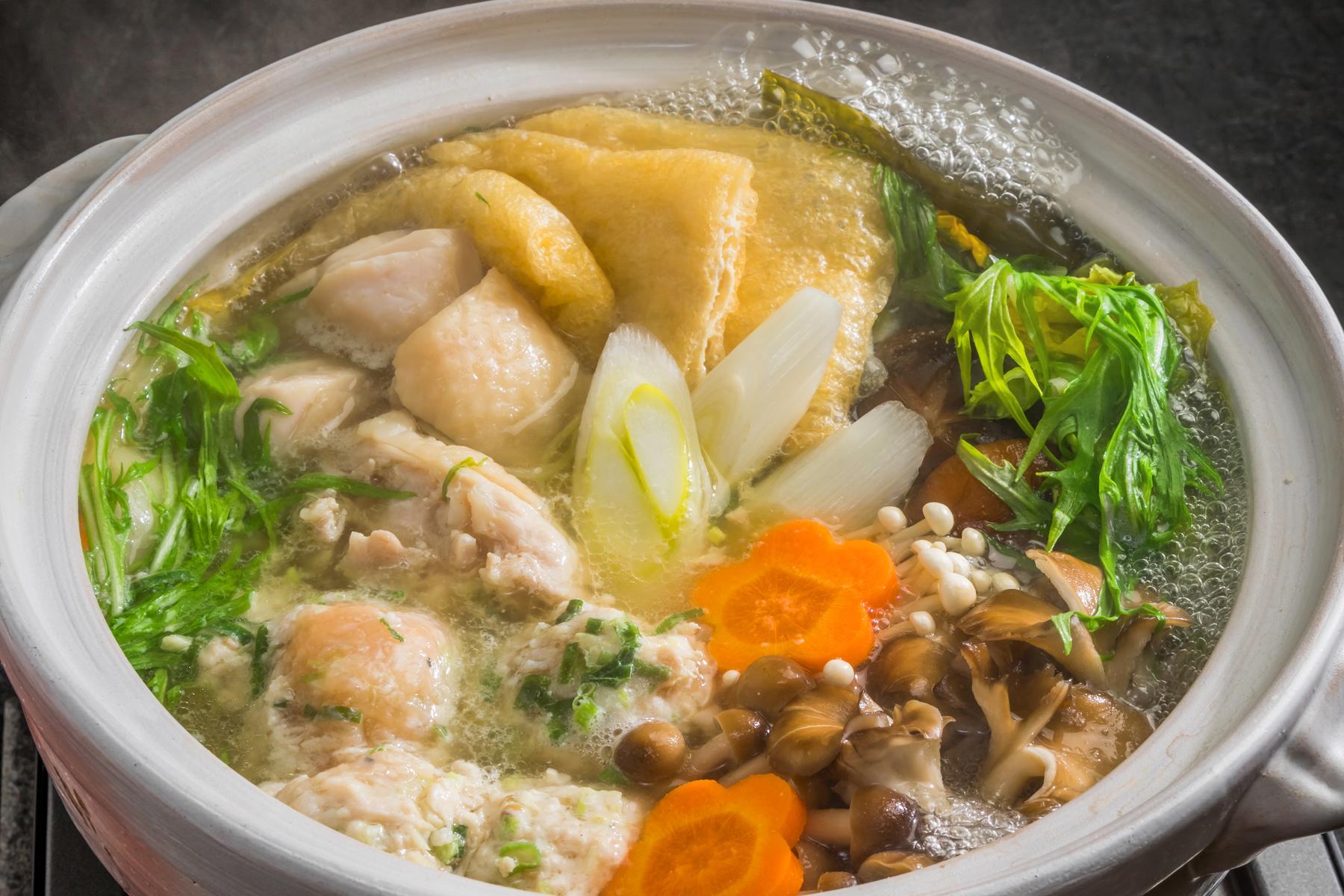 Picture a giant pot of soup made with chicken broth, plenty of good-for-you protein sources, bok choy, and lots of vegetables. You’re probably picturing what you imagine to be a pretty healthy meal–and it is. It doesn’t necessarily strike you as the sort of thing you eat in order to put on lots of weight. And yet chanko nabe is the signature meal of sumo wrestlers actively working on gaining weight as part of their training. This hot pot style dish isn’t going to overwhelm you with its calorie count if you’re just sitting down for a casual lunch, but for sumo wrestlers, the goal is to eat massive portions of this protein-forward meal.

What’s better than lunch and a show? At the Sumo Experience gives you the chance to see a sumo wrestling demonstration up close and enjoy a chanko nabe lunch (in approachable, non-wrestler sized portions). 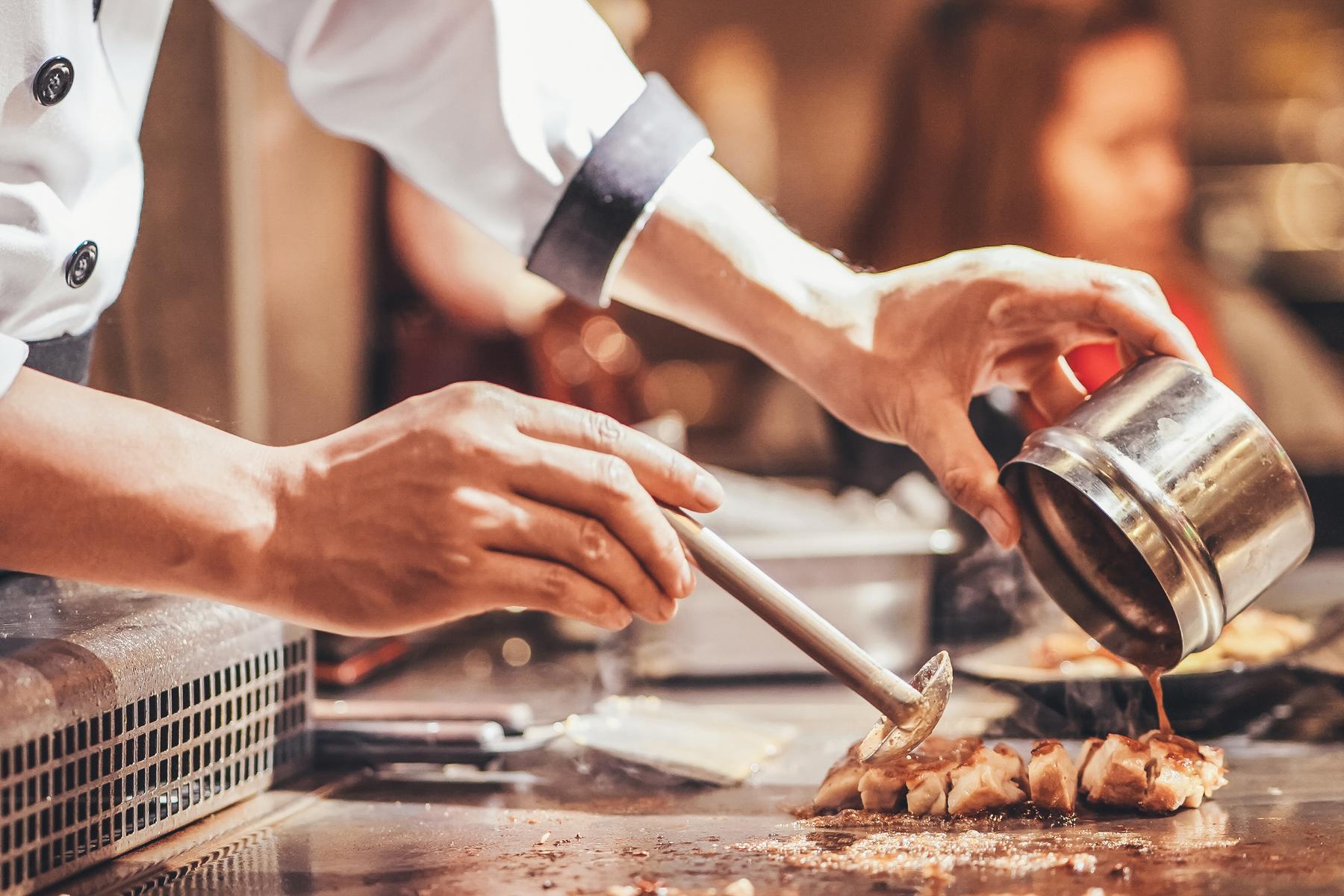 Somewhere along the line (most likely coinciding with the advent of Benihana) Americans came to refer to teppanyaki (food that is cooked on a large grill) as “hibachi.” But whatever you refer to it, the teppanyaki experience allows you to watch a skilled chef at work.

For an experience that’s less about onion volcanoes and knife tricks and more about watching a chef expertly prepare duck confit and beautifully marbled miyazaki beef, reserve a counter seat at Ginza Fujiya Miyako in Shibuya. The food here is well thought out and even surprising. For example, the aforementioned beef is served on a thin slice of bread that soaks up the meat’s juices and is then doused in confectionary sugar, fried, and served as a garnish during the dessert course. 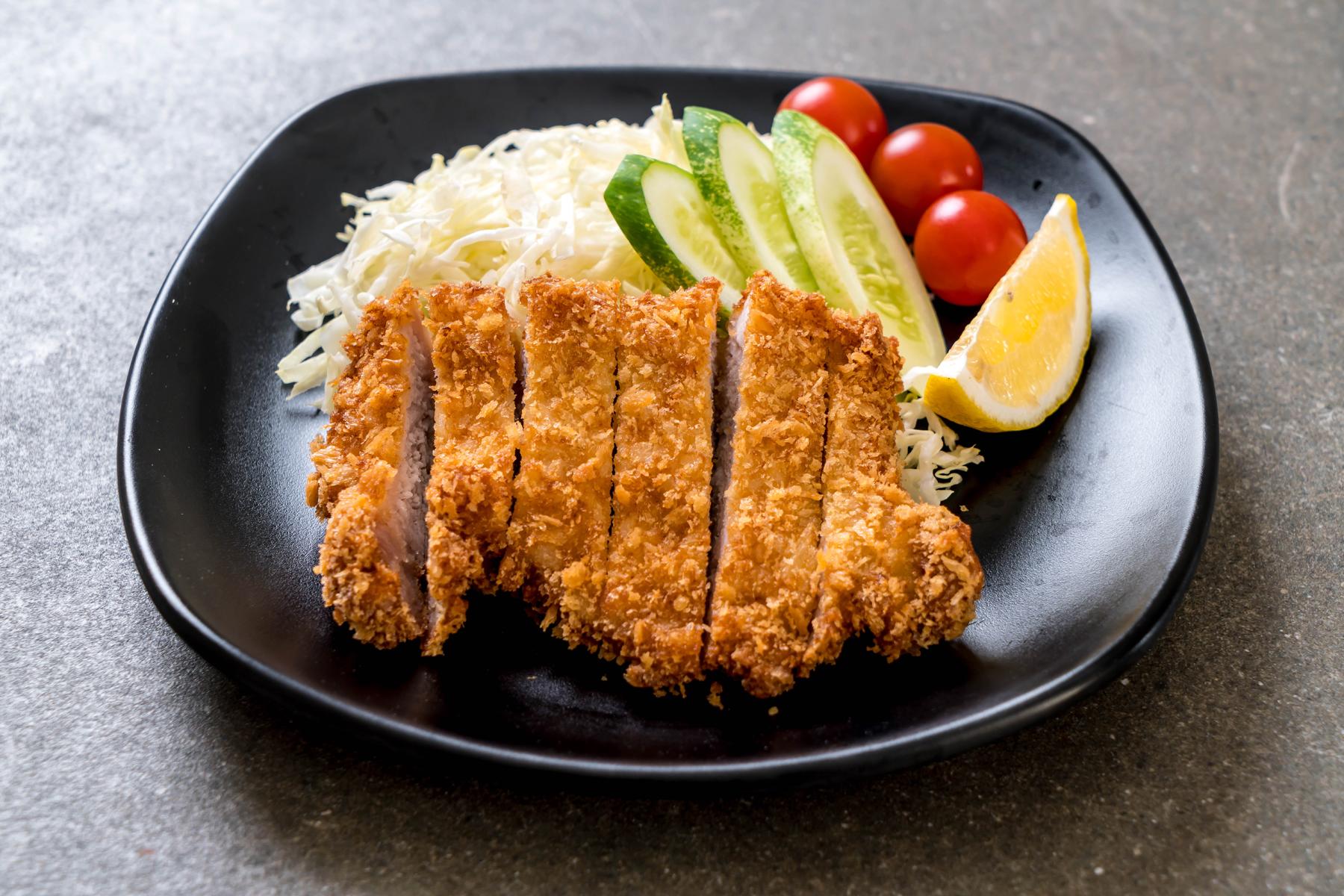 Tonkatsu is simply a pork cutlet that’s been breaded and deep-fried. Simple and satisfying, it’s typically served with shredded cabbage and other side dishes (like miso), alongside curry, or as a filling in a sandwich. But no matter what variation you prefer, you’re sure to have the most comforting of “comfort food” experiences.

As with any food that seemingly only involves a few steps and ingredients, having it prepared in precisely makes all the difference. Butagumi does just that with an extensive menu of carefully chosen, premium pork. Just head to Nishi-Azabu neighborhood and look for the signature crescent moon-shaped window. 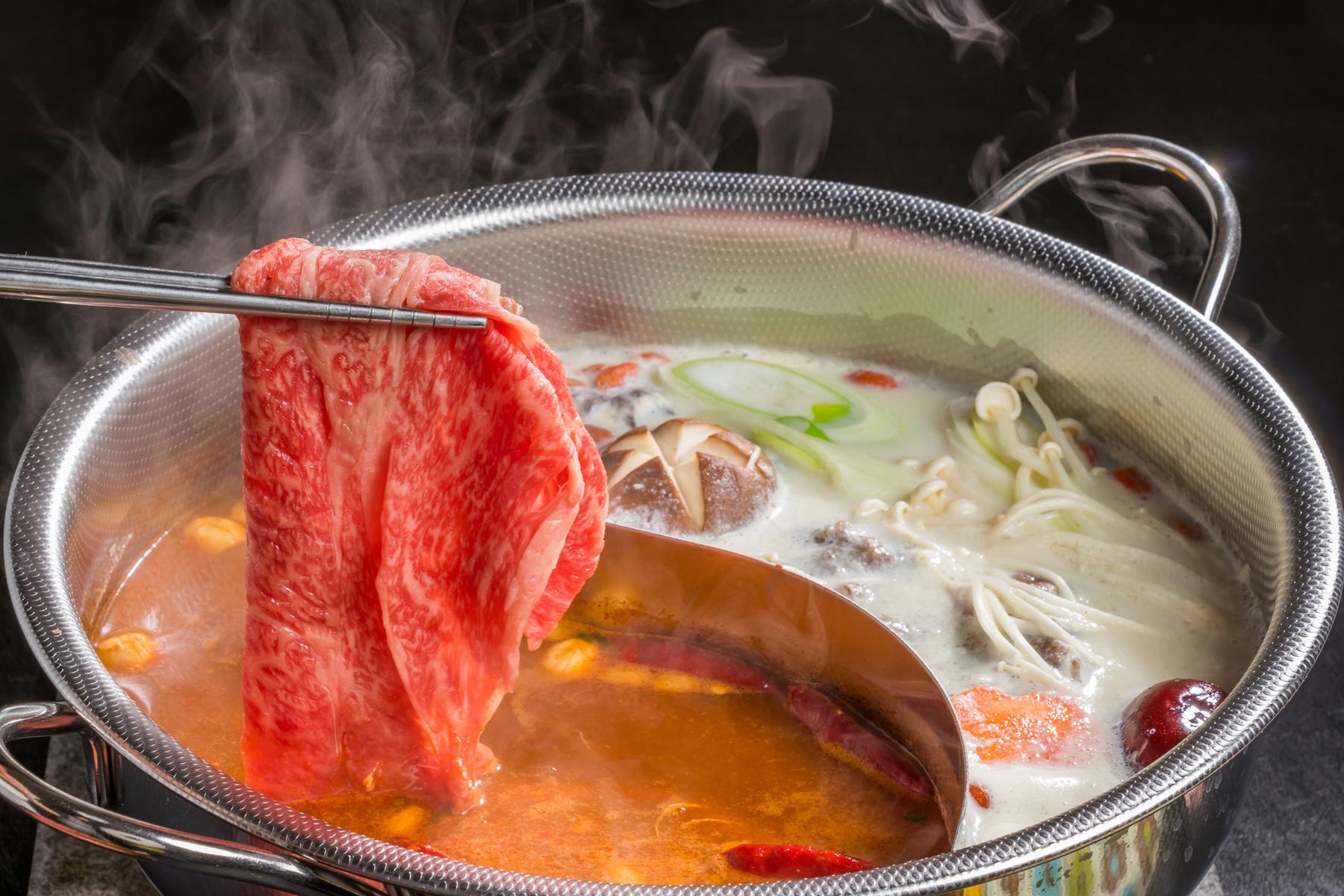 Shabu-shabu is similar to chanko nabe in the sense that it’s a “hot pot” style dish that can include myriad ingredients. But instead of eating your portion from a single bowl, shabu-shabu is cooked one piece at a time. Whatever meats you choose, for example, are sliced very thinly so they don’t have to spend much time in the boiling broth before they’re ready to be dipped in your sauce of choice. Then at the end of the meal, the leftover broth is combined with rice or noodles.

Secure your party a private room at Kintan and relax and enjoy some beef tongue and veggies in whatever combination of broth and sauce that strikes your fancy. 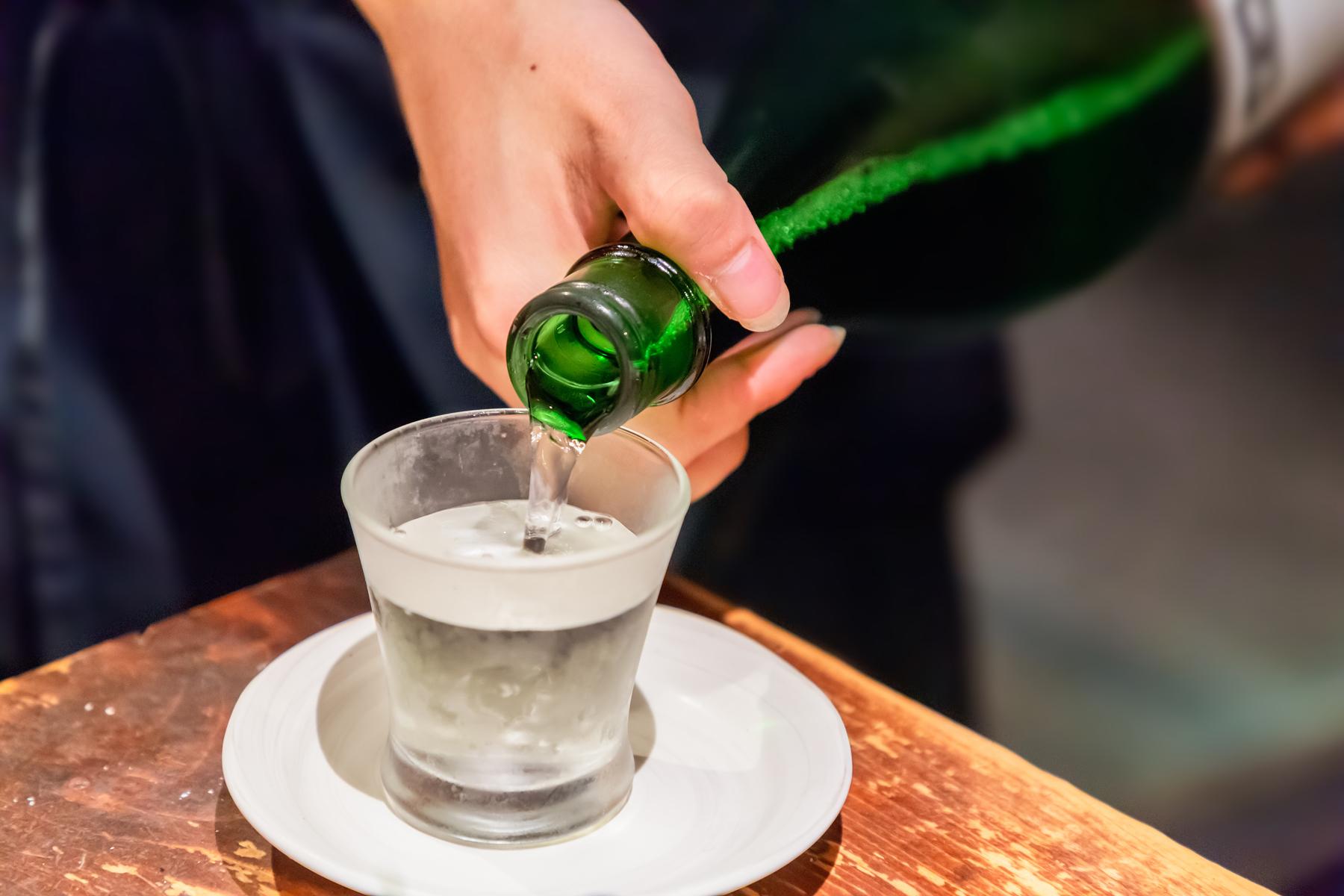 While sake in and of itself isn’t a meal (although that might depend on the kind of day you’ve had), it can actually be used as a cooking ingredient—often as a way to add flavor to broth and mitigate the smell of fish.

A great way to sample some sake along with your meal is at Kushikoma, an izakaya (pub), in Otsuka. Just about any item you can order off the menu is elegant and surprising in its flavoring. But what’s really bolstered this izakaya’s reputation is its wide array of high-quality sake from all over Japan. It’s the perfect place to acquaint yourself with sake as a refreshing beverage as well as an element of the meal itself.