Come along with us as we get up close with these majestic animals.

The sun-dappled bamboo grove I’m standing in whistles and whispers as the leggy stalks bend in the wind. With every rustle I can’t help but glance over my shoulder—I’m in mountain gorilla territory. My fears are quickly abated, though, as our Volcanoes National Park guide, Cally, explains that our group of eight will have to cover quite a distance to find the gorillas. We’ll be trekking up into the high, tangled depths of Rwanda’s Mount Karisimbi, the country’s highest inactive volcano.

“If you get too close to a gorilla, they’re going to let you know,” explains Cally, who proceeds to make a throaty, clucking sound, gorilla speak for “get out of my way.” We’re also taught how to communicate in return. Turning to one another, we practice the huffing, sing-song sigh that will let the gorillas know we come in peace. The noise mimics the sound the animals make when they’re content.

Armed with nothing but a few grunts, I suddenly feel ill-equipped to encounter these powerful animals, which can weigh up to 500 pounds and eat 15 percent of their body weight every day. But as we leave the sunny bamboo grove behind and slosh along a muddy trail leading into the darker jungle, I feel more excited than anything. I remember how lucky I am that the gorillas are still here. Just a few decades ago, there were only 242 of the animals left in the Virunga Massif, a chain of volcanoes that spans Rwanda, Uganda, and the Democratic Republic of the Congo. 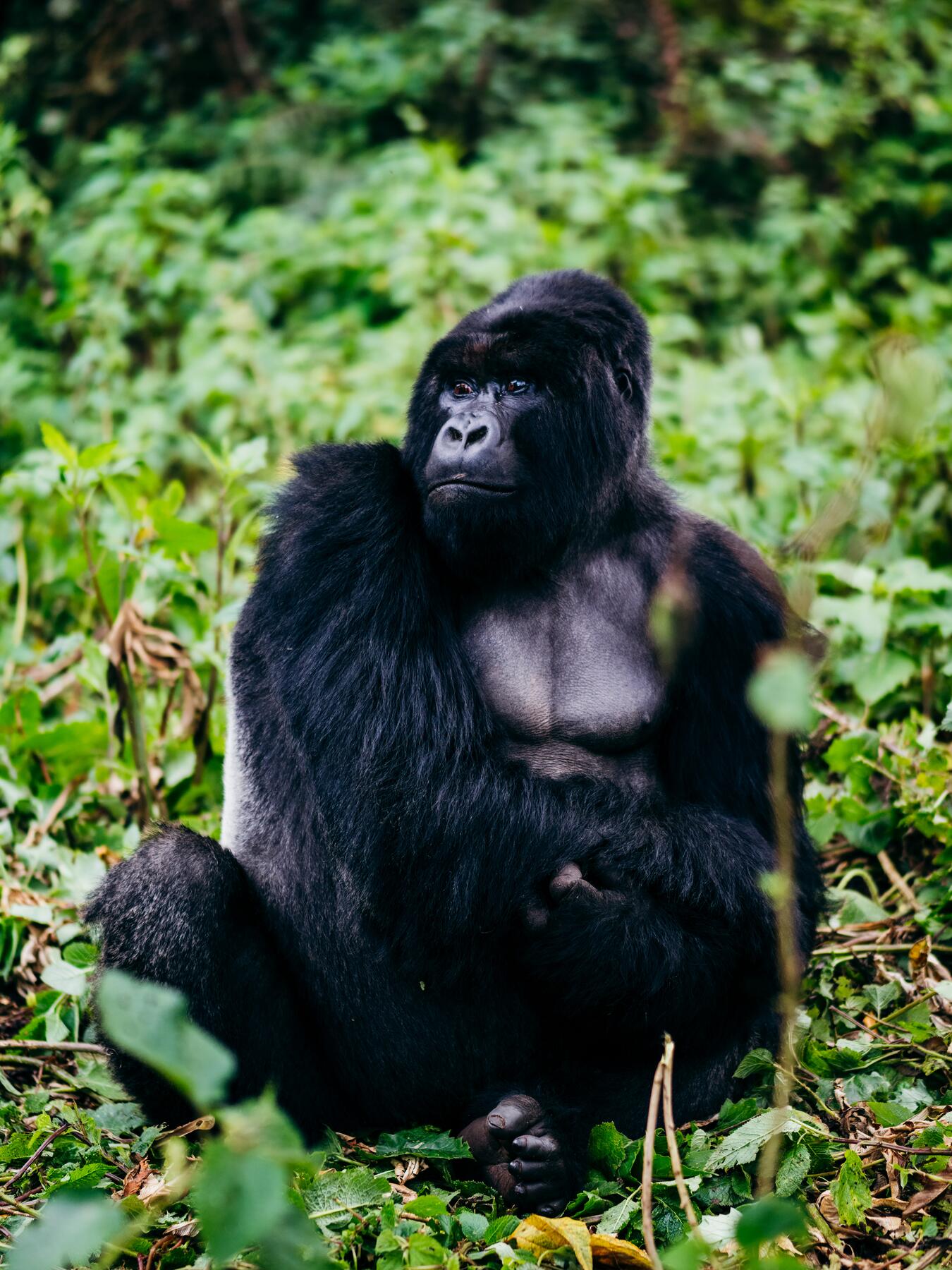 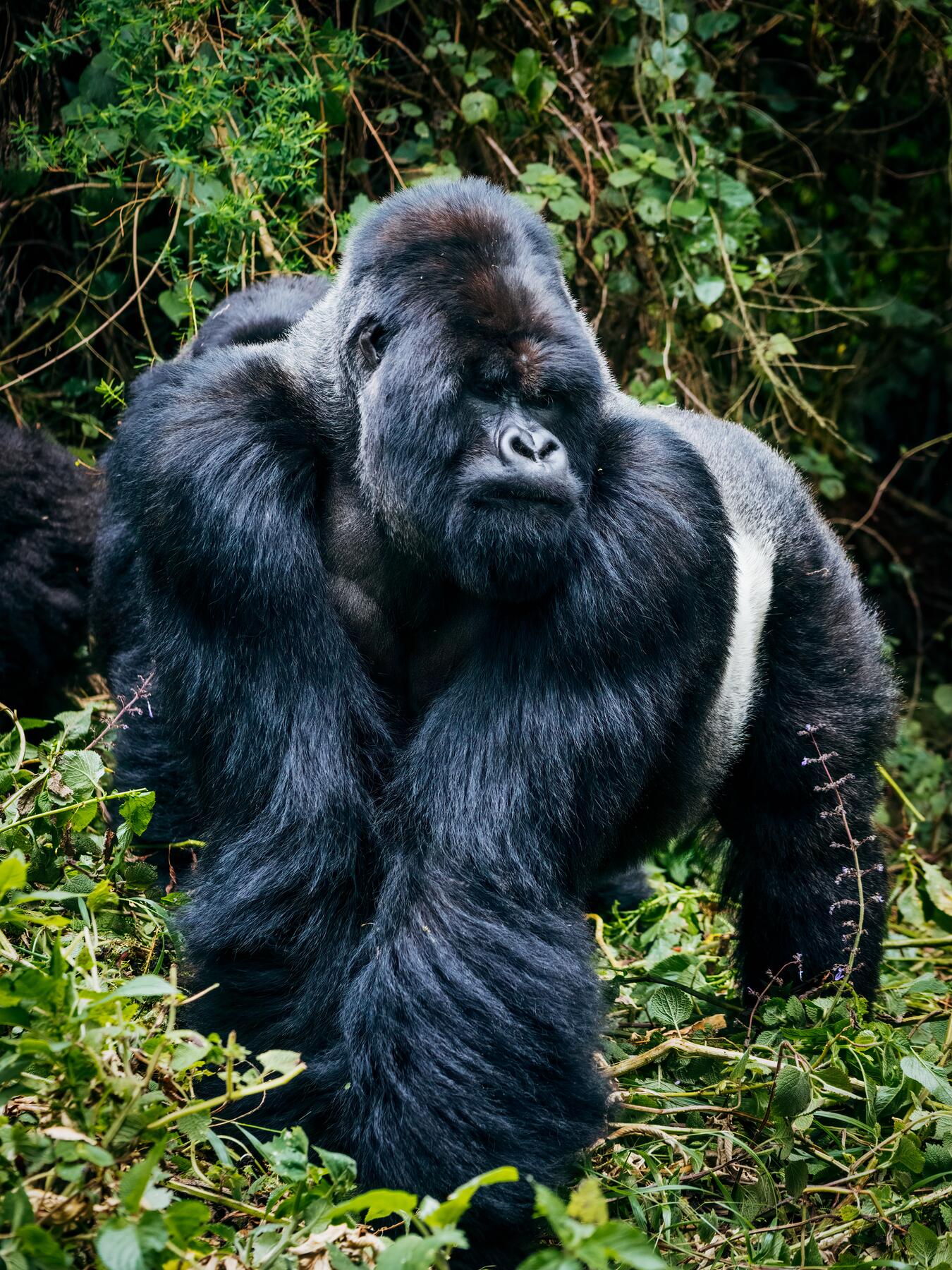 Despite Dian Fossey’s storied work to protect the gorillas and her establishment of a research center here in the late ‘60s, the population continued to plummet at the hands of poachers and land encroachment. While the 1994 genocide devastated the nation, it also left the gorillas unprotected, further reducing numbers. Over the last decade, however, government initiatives have helped to rehabilitate the gorillas and their habitat, and—although still critically endangered—there are now 604 of the animals in the Virunga Massif. That’s partly thanks to trekking permits sold to tourists. Ten percent of those profits are fed back into conservation efforts and also used to support the local community, where the funds provide clean water and repair infrastructure.

Dedicated park rangers—some of them former poachers—also keep vigil over the gorilla families and bring medics in to care for them when necessary. “You have a 100% chance of seeing gorillas in Rwanda because unlike other countries, our rangers stay with the gorillas all day,” notes Cally. Even throughout the pandemic—when endangered wildlife in other countries has been left unprotected due to the tourism downturn—, the stalwart rangers remain by the gorillas’ side.

“Strict rules have been put in place to minimize any risk of disease transfer to the gorillas, including having rangers and anti-poaching patrols work in rotations, isolated from the larger community so that the risk of their exposure to COVID is minimal,” says Tara Stoinski, president and chief scientific officer for the Dian Fossey Gorilla Fund. This is no easy feat, considering the recent loss in funding for park programs.

“Strict rules have been put in place to minimize any risk of disease transfer to the gorillas, including having rangers and anti-poaching patrols work in rotations, isolated from the larger community so that the risk of their exposure to COVID is minimal.”

Ahead of our group, the ranger’s radio crackles and spits with static. He’s communicating with other rangers deeper in the park who are tracking the Susa family, the troop of 26 gorillas that we’re hoping to lay eyes on. The ranger says something in Kinyarwanda, the national language, into the radio as I catch my breath, trying not to slide down the swampy embankment we’ve stopped on.

A few more clipped sentences buzz from the radio and we veer off to the left and up a steep incline before reaching a lush, emerald green clearing. Towering African redwood crowd the glade’s edge, draped in twisted vines. In the distance, the treetops disappear, cloaked in fog. The balmy air and dense jungle seem to dampen sound. Only the melodic ringing of a red-faced warbler cuts through the silence. I haven’t even laid eyes on a gorilla yet and I already feel as though I’m living out my Gorillas in the Mist fantasy in this mythic jungle. 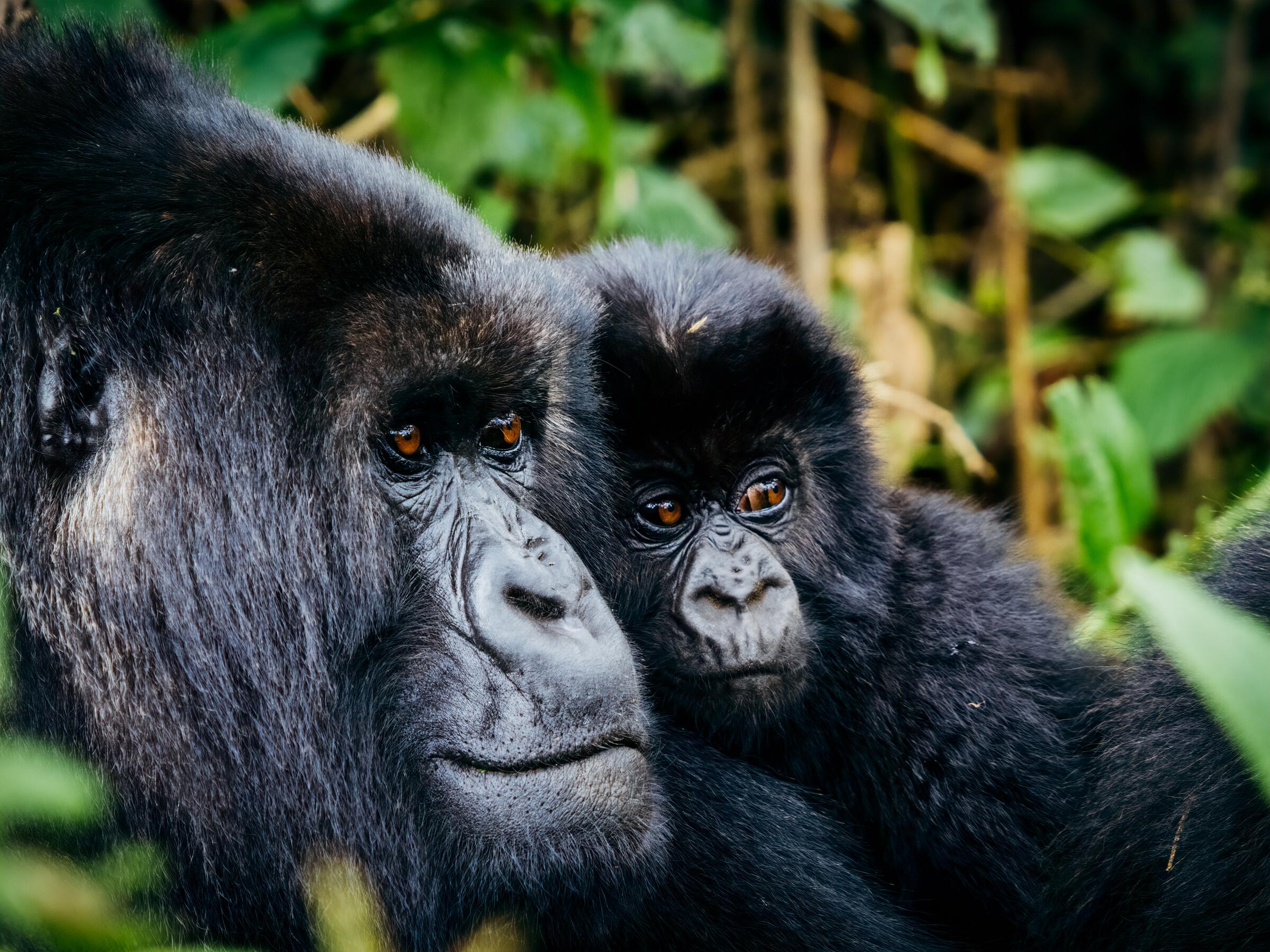 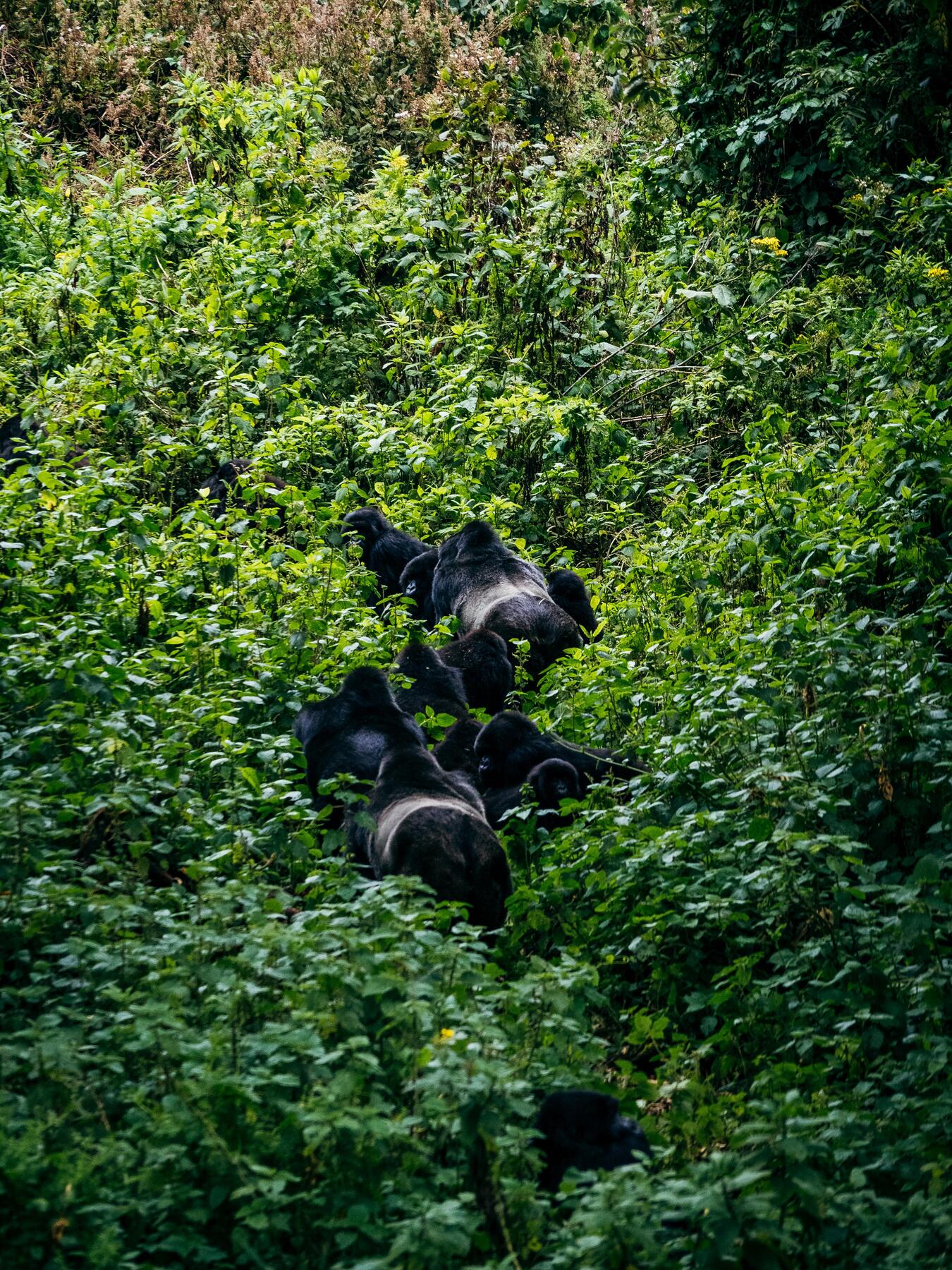 “We’re close,” announces Cally in a hushed voice at the head of our group. We once again enter the trees, plucking our way across the gnarled, overgrown forest floor. Stinging nettle grabs at my legs and arms, and even through long pants and sleeves, the thorn’s hot kiss blossoms into an excruciating itch. We’re instructed to drop our bags and carry only our cameras as we head quietly up an incline towards the Susa family.

We reach a smaller clearing and there sits Kurira, the family’s Herculean silverback, arms crossed and amber eyes on us, unmoving. I cover my mouth with my hand to stifle a gasp and stare back. We’ve been given strict instructions to remain quiet in the gorillas’ presence and to also refrain from using camera flashes or pointing gestures. Kurira’s face stretches into a wide, toothy yawn. Then he sighs, visibly bored with us. Around him, other family members begin to emerge out of the shadowy thicket.

We’ve been given strict instructions to remain quiet in the gorillas’ presence, and to also refrain from using camera flashes or pointing gestures. Kurira’s face stretches into a wide, toothy yawn. Then he sighs, visibly bored with us.

For the next hour, we watch them, enraptured. Young gorillas chew lazily on twigs and leaves, a mother saunters over the leafy ground, carrying her baby, and others loll about together on the forest floor. “It’s very rare to see a group this large,” says Cally. Without warning, Cally will sporadically alert us to a gorilla walking towards us out of our sightline, and we have to move swiftly out of the way.

In their gestures, murmurs, and bright brown eyes, it’s impossible to not feel a deep, familial connection to these primates. If they sense the same twinge of recognition, they don’t show it, only sending the occasional impassive glance my way. I can’t help but feel voyeuristic. An uninvited guest at a family dinner. I’m grateful to pioneers like Fossey and those working today to defend these majestic animals, but also feel a pang of sadness that constant human presence is necessary to protect them. How different are they from the non-habituated animals of their kind?

Our time with the gorillas is up. I’m at the front of the group with Cally, the other seven hikers some distance behind. That’s when things go sideways. 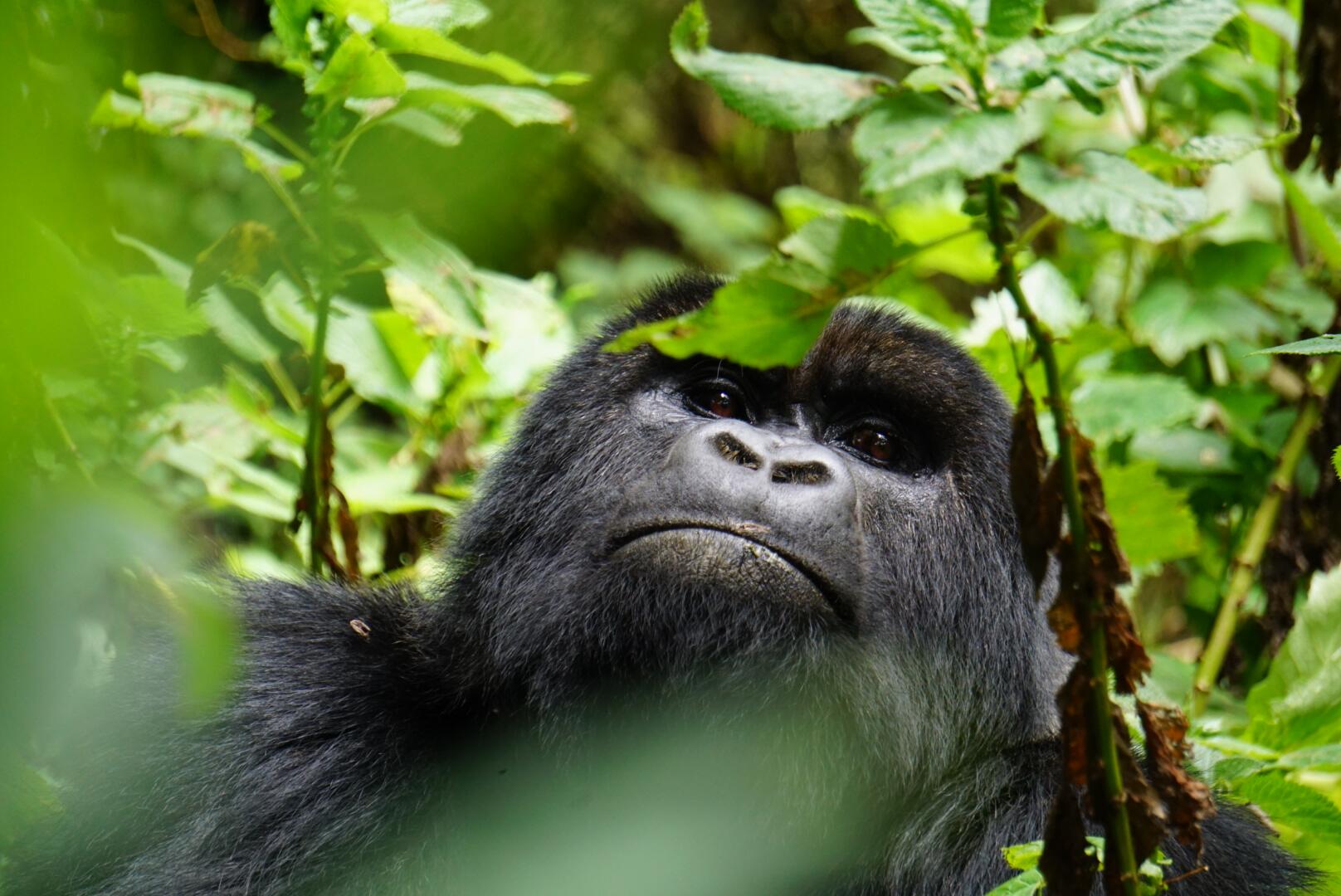 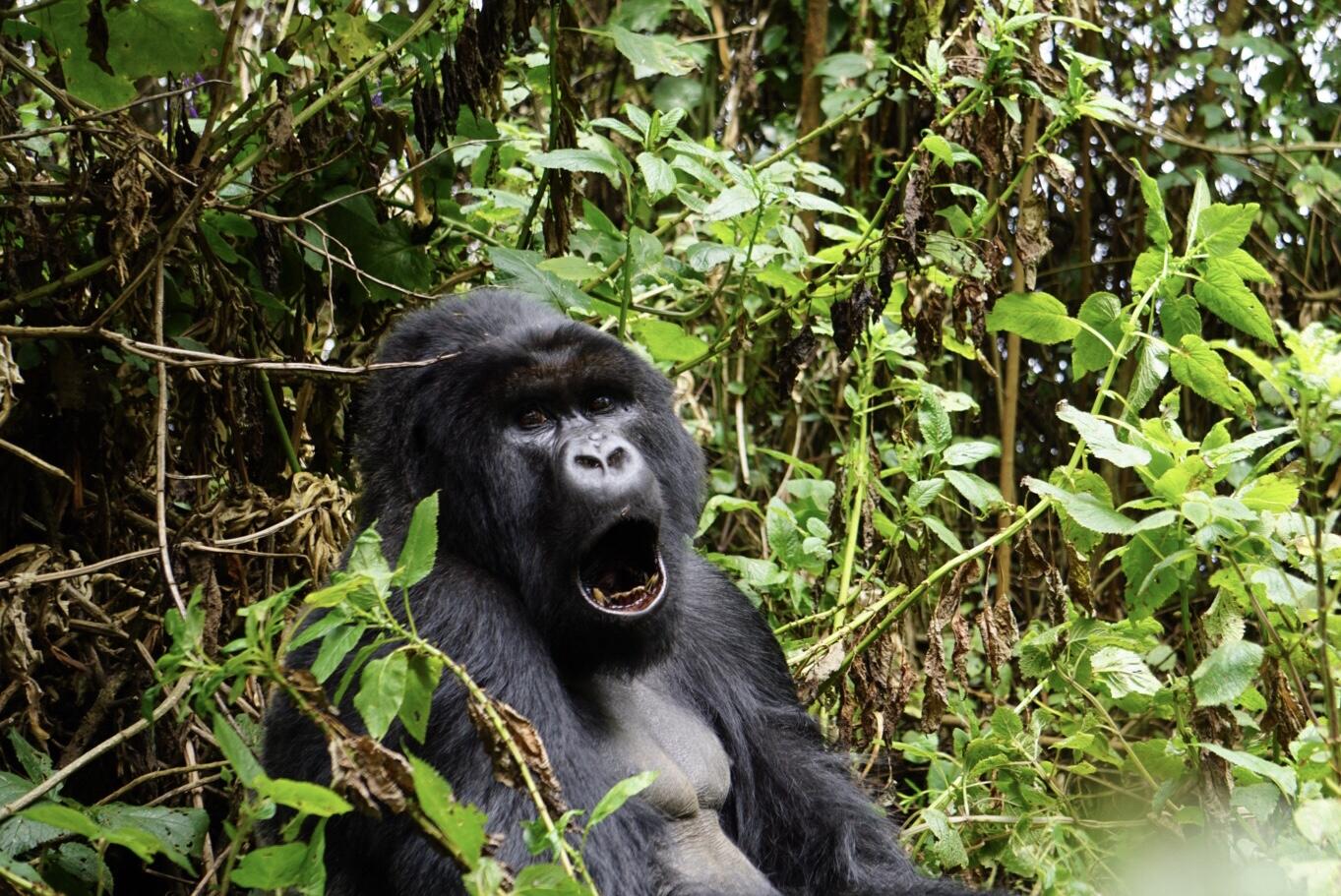 Cally points his index finger to a mother ambling slowly down the hill towards us, a baby on her back. I turn to snap a few photos, and through the lens see her quickly pick up speed, running toward me. I barely have time to register her glaring yellow eyes, bared teeth, and alarming scream before Cally grabs my arm and whips me behind his back. He rises on his tiptoes, aiming a loud, throaty call at the gorilla, who immediately backs down and slips into the forest’s depths. My heart hammers in my chest as I try to process what just happened. All I see are those eyes. It’s thrilling and totally wild.

Rwanda reopened to international travelers on August 1 and continues to take extra precautions to protect visitors and wildlife alike from coronavirus. “There is a significant financial and logistical investment in ensuring the gorillas remain protected every single day, which demonstrates that their conservation is a priority,” says Stoinski. Discover how you can support conservation efforts and the Volcanoes National Park community during the pandemic from afar, or start planning your future gorilla safari.