Turns out, a fake fiancé comes with plenty of perks.

When I told my friends that I had agreed to go on a two-week trip to Hawaii with a man I met on Tinder eight weeks ago, most of my them (understandably) thought I had lost my mind. Many of them feared for my safety—fear that, at the time, seemed silly but now, looking back, I realize was completely valid. If a friend told me she was going on a two-week vacation to a tropical island with someone she barely knew, I’d, well, I’d tell her to go for it. I’m probably not the best person to listen to in this kind of scenario.

I do random stuff like this all the time. For example:

I’ve gone to a Furry convention.

I went to that famous swinger’s resort in Jamaica.

I took a blind date to my office’s holiday party because I thought it would be funny (it wasn’t just *funny*; it was hilarious).

One thing you need to know about Bryan is that he’s a total mess of a human. He’s a walking tornado. A  tornado that loves Star Wars and the most boring podcasts on the planet. He’s also the kind of person who buys all four versions of Breyer’s vanilla ice cream to conduct a taste test by himself, take an ADHD test just for kicks, and invest in bitcoin. He is so dopey, in fact, that he invited me on an 11-day trip to Hawaii with NO game plan, and we were forced to arrange an itinerary in less than two months (which I’ll get to in a minute). So, eight weeks after we first met, completely out of nowhere (no context, nothing), I got this text: 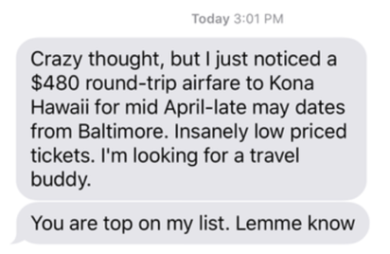 And I’m the stupid, impulsive, unstable weirdo who said yes. Well, my actual initial response to that text was, “Ok, but only if you promise me I’ll get lei’d.”

While most of my friends were horrified that I was going on this trip with someone I barely knew, my mother just looked at me, sighed, and said, “Of course you are.”

Before we started planning, we talked boundaries, communication styles, and set some ground rules, like how we would never abandon the other person and go off alone and how we would handle it if we got on each other’s nerves. I also negotiated that we spend our last night in Hawaii at Four Seasons because come on, when was I ever going to be in Hawaii again?

The planning ended up being surprisingly easy—both Airbnbs we wanted to book were miraculously available during the days we wanted. In the end, we decided on four days at an oceanfront house in Pahoa (on the east side of the island where there are very, very few tourists), five days at a farmhouse in Kona (west side of the island), and our final night would be at Four Seasons, per my request.

About a month after we finalized accommodations, I flew from Austin (where I was living at the time) to Seattle, where we’d meet to catch our flight to Kona. We took a selfie and I sent it to the friends who said HB was planning on murdering me and dumping my body into a volcano.

Our house in Pahoa was magical. It had two balconies—one downstairs (outside of our bedroom) and one upstairs (outside of the living room/kitchen)—and a pool that all overlooked the ocean. From the balcony, we could see Kehena Beach to the left and one other house (to the right) in the distance perched on the side of a cliff. That’s it. The rest of our view was sapphire-blue waters, palm trees, and a rocky shore. 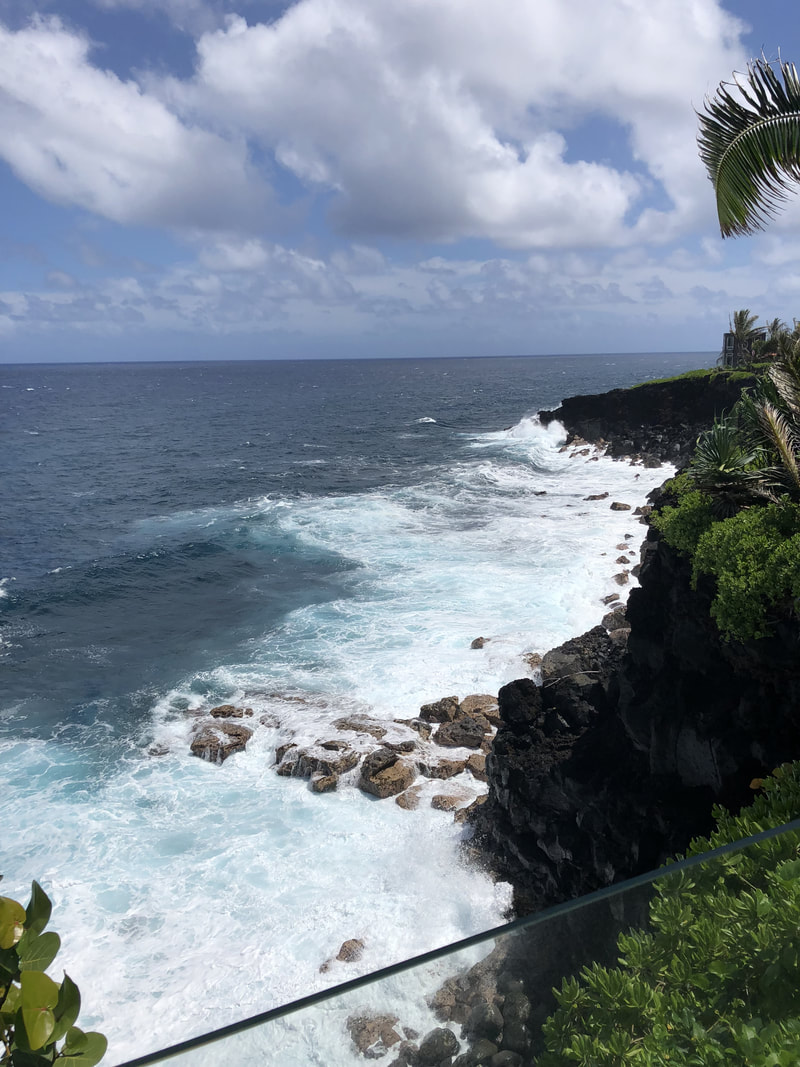 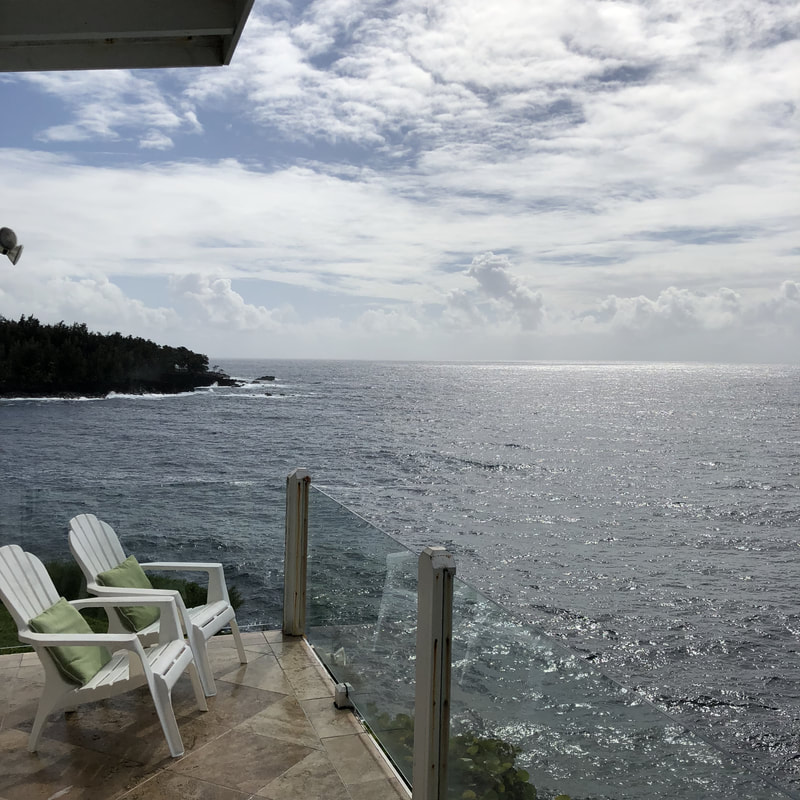 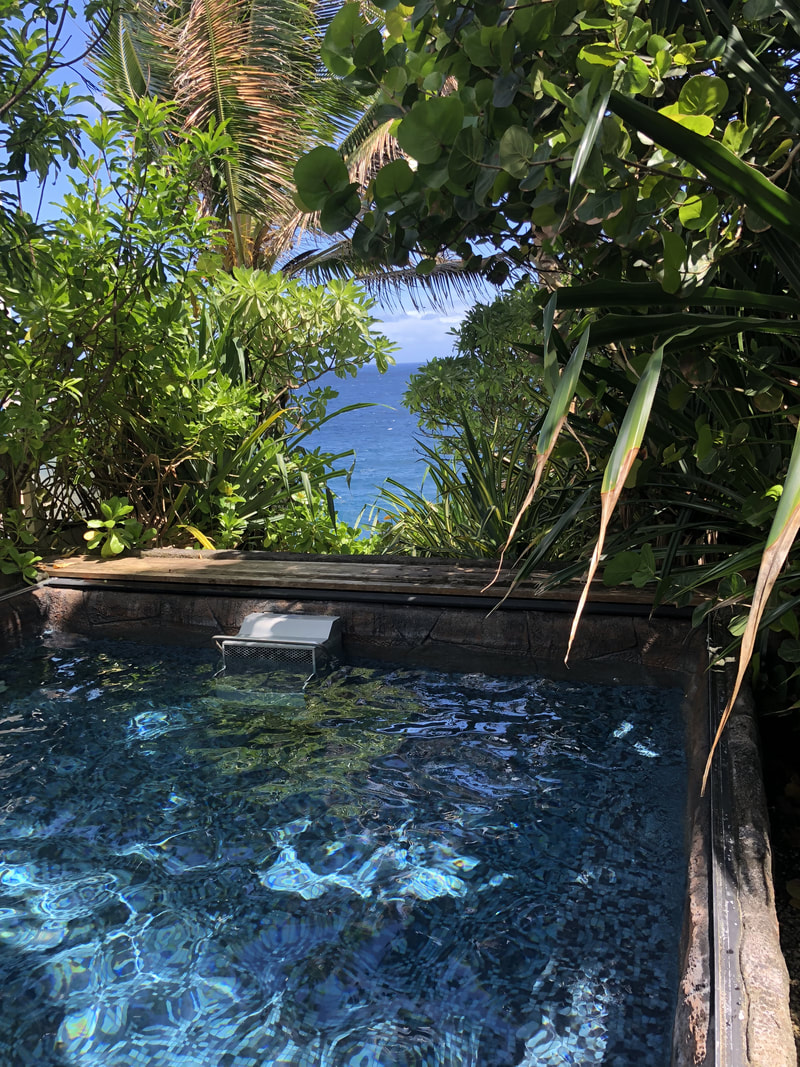 For four days, we swam in the pool, went to the naked beach (which was a five-minute walk away), and relaxed at our house with the incredible views. One of my favorite memories will always be lying down on the shore of Kehena Beach, completely naked, and feeling the sun on my face as the waves licked my feet and rolled up to my waist.

Living in Pahoa was one of the most relaxing experiences of my life. There was no schedule. There were no obligations. I was off my phone 90% of the day. The only time I was on my phone was when Bryan and I got a horrible idea to troll my friends. And by “horrible,” I mean downright amazing.

Bryan and I decided to fake getting engaged.

I don’t remember who proposed the idea first, but I wear a diamond ring on my middle finger (a gift from my grandmother) that could be easily be mistaken as a modest engagement ring. The first time we got “engaged,” Bryan and I flagged down an older man and his elderly mother driving by and asked them to take some photos of us on some lava formations. Then I posted the pictures with the caption “Still in shock. This man is always full of surprises. #engaged” I posted and waited.

The whirlwind, impromptu vacation had already been a lot for my friends and family to take in. I figured most would think to themselves, “Well, she’s already agreed to a $4K vacation with someone she barely knows—an engagement couldn’t be completely outside the realm of possibility.” As predicted, it wasn’t long before the flood of texts started to come in. I wasn’t sure what to do.

“It’ll be more believable if you go dark,” Bryan, a literal demon, suggested. He was right. As someone who usually texts back in a timely manner, when I didn’t respond, my friends started to panic. While my friends and family on the mainland were busy freaking the hell out, Bryan and I were at our house overlooking the ocean, drinking beers, and cackling.

The next day we did it again at the naked beach. We soon got addicted to the pageantry and the thrill of seeking out our next “victim” aka whoever Bryan would walk over to and ask if they could take pictures on his phone while he proposed to his “girlfriend.” We nailed the acting and kept the charade up after the proposal to make sure everyone around us didn’t suspect that we were just messing around. It got our blood pumping. And then we’d laugh our heads off as soon as we got back to our rental car.

In addition to the proposals at the lava formations and nude beach (Kehena), Bryan replicated the charade two more times (at Hapuna Beach and Kua Bay). No one ever questioned us. Because what kind of sick, twisted people would fake an engagement? Each time I posted pictures, I used the same initial caption; I figured if I used the copy often enough, my friends would catch on. They did not. The CEO at my day job congratulated me on Twitter.

“We’re not hurting anyone. In fact, we’re spreading joy,” Bryan reasoned when I started to feel like maybe I had gone a little too far. We imagined the people we enlisted to take our photos would return home with a story to tell their friends. “I helped a couple get engaged!,” they’d tell anyone who asked about their recent trip to Hawaii. And for the people who clapped after Bryan got down on one knee, we agreed that we were helping people believe true love exists. Nothing wrong with that.

We had a few other adventures, like swimming with dolphins at Kealakekua Bay and drunkenly singing sea shanties at Privateer’s Cove, a pirate-themed restaurant next to a laundromat inside a strip mall. On our final day, we checked into the Four Seasons, incredibly hungover.

“We’re not hurting anyone. In fact, we’re spreading joy,” Bryan reasoned when I started to feel like maybe I had gone a little too far.

By that time, Bryan had proposed to me four times and had decided it was now my turn. While he may have had me beat on quantity, I was determined to beat him on quality.

The Four Seasons is an excellent place to stay if you are sophisticated, rich, and classy. I am none of those things, so I decided to troll them, too.

One night while we were at our second Airbnb (in Kona), Bryan, the dumbest man alive, complained that he had a hankering for Chicago deep-dish style pizza and actually called restaurants on the island to see if any of them served it. I told him he was insane, and the only place you can find that kind of pizza was in Chicago. Immediately before this craving, we tried to devise the plan of how I would propose to him at the Four Seasons.

“You know, Giordano’s supposedly delivers worldwide,” Bryan said wistfully. I Googled it. He was right. One online order and a quick phone call to the Four Seasons concierge later, I was able to overnight two pizzas from Chicago and have the most expensive beachside restaurant at the Four Seasons agree to cook it for us because I was proposing to my “partner.” I may or may not have spent $350 to do this.

They fell for it. Because, again, who would question it? What kind of sick, twisted people would fake an engagement?

In fact, they fell for it so hard that, upon checking in, they kindly informed us that we had been given a $600 room upgrade.

That night, two pies came out of the kitchen at the Four Seasons—one pepperoni and one sausage in the shape of a heart—and I proposed to Bryan. I’ll never forget the excitement in the restaurant. The maître d’ and sommelier were excitedly buzzing around and, we later discovered they had informed the entire restaurant of my little plan. I still laugh that someone had to print out a little card on Four Seasons’ stationary, write “Will you marry me, Bryan?” on it, and affix it to the inside of a box with a heart-shaped pizza inside. I saved that card. 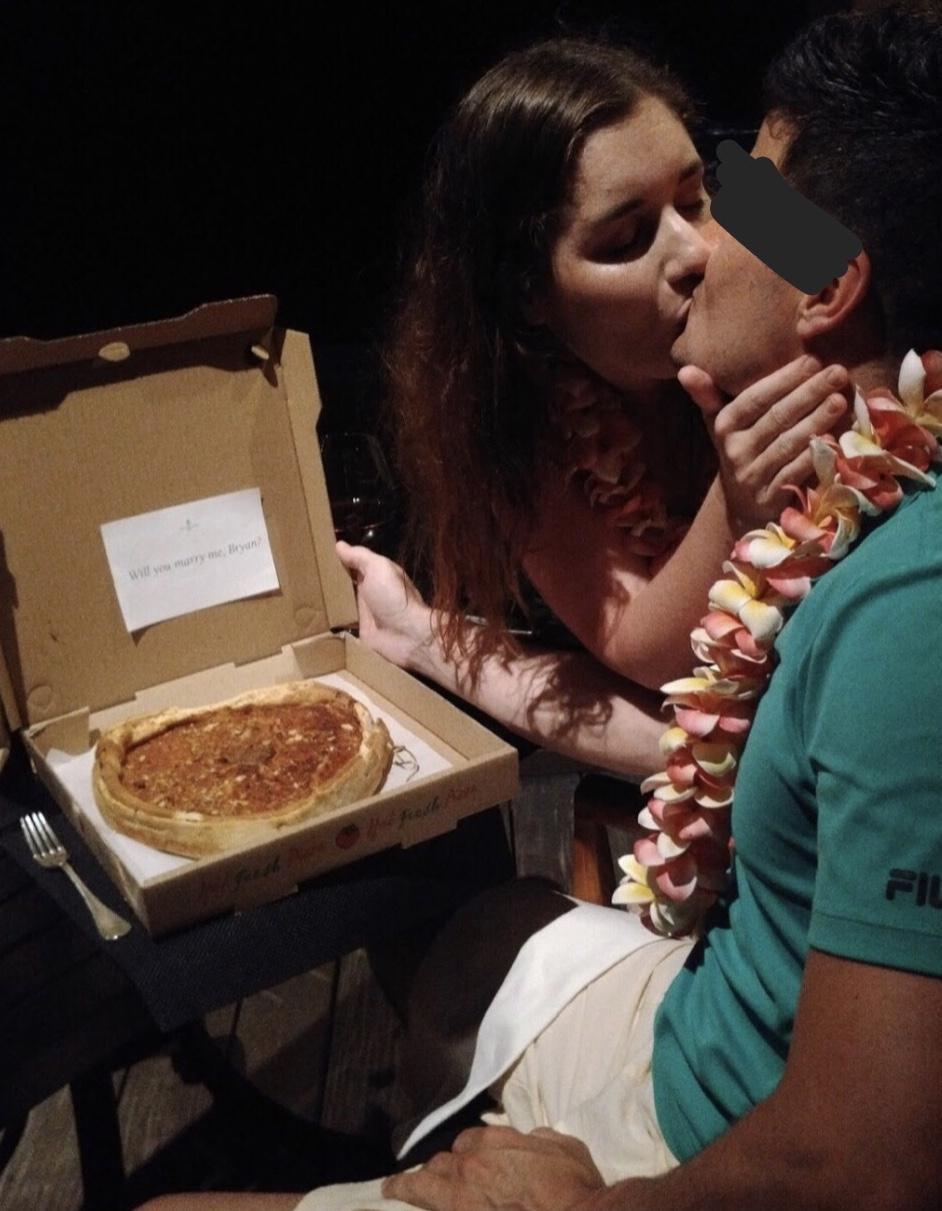 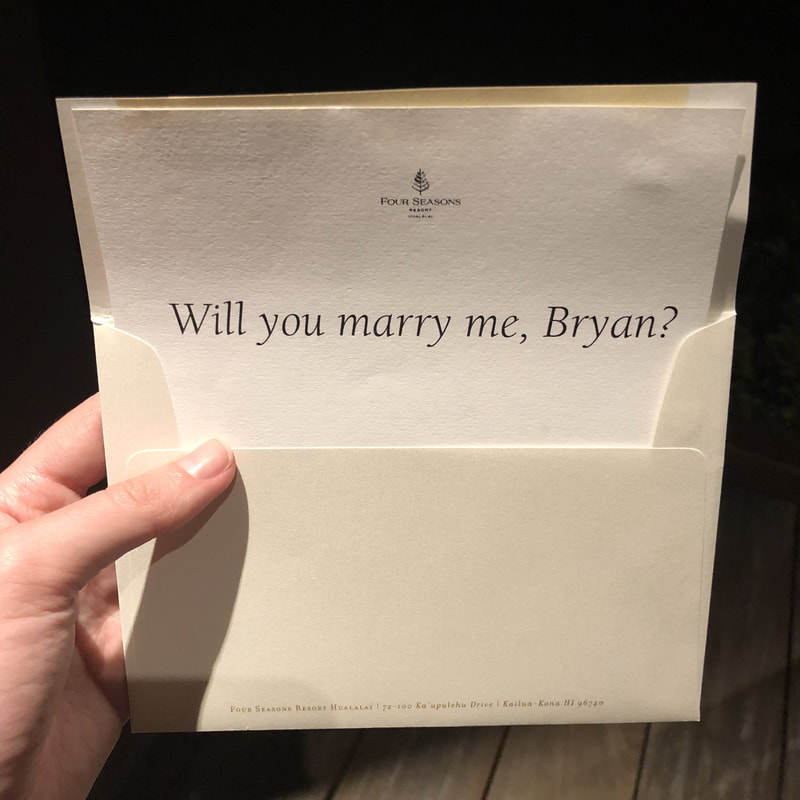 In the acting role of my career, I conjured actual tears. He said yes.

Our last night in Hawaii couldn’t have been better.

When I returned to Austin, I took off all my jewelry to put on my bedstand for the night and noticed there was a grain of black sand from Kehena Beach stuck inside my “engagement ring.” I tried to dig it out, but it wouldn’t budge. After a few minutes, I stopped trying. I figured carrying around a piece of Hawaii with me wasn’t a bad thing.