If there’s one word to sum up the viewing experience of the Netflix show Somebody Feed Phil it would simply be “positivity.” During every minute of the hour-long episodes, Phil Rosenthal exudes pure joy over finding something new, discovering a hidden treasure, and of course, devouring one-of-a-kind flavors all around the world.

In season four of the show, Rosenthal travels to Rio De Janeiro, San Francisco, Singapore, the Mississippi Delta, and Hawaii where he makes lifelong friends through food, sharing stories across the dinner table, and even shedding light on charitable organizations that are doing selfless work in their respective cities.

Talking to Rosenthal on the phone is no different than watching him on TV. What you see is what you get, and by the end, you feel like you’ve made a lifelong friend after only a 30-minute conversation. There’s another singular word that comes to mind when describing this hungry globetrotter, and that word is simply, “mensch.” 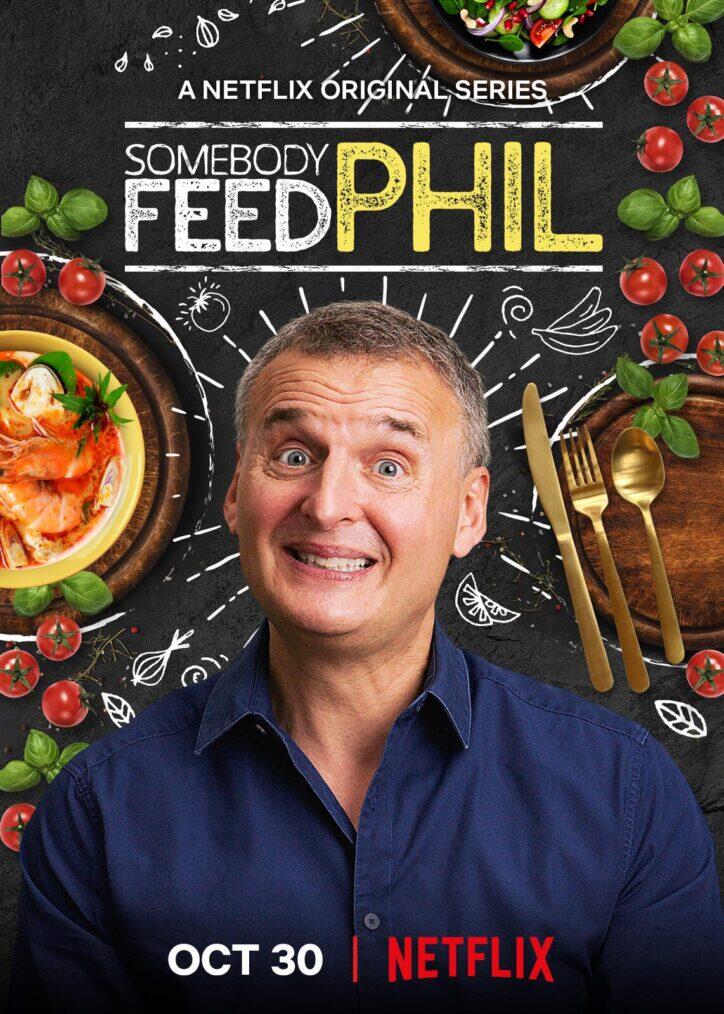 Do you find it fortuitous that the show is coming out right now? Not just in terms of a pandemic, per se, around the election? As I watched the show, I really thought you have so many messages about bringing people together through food. Was it always there while you were shooting? 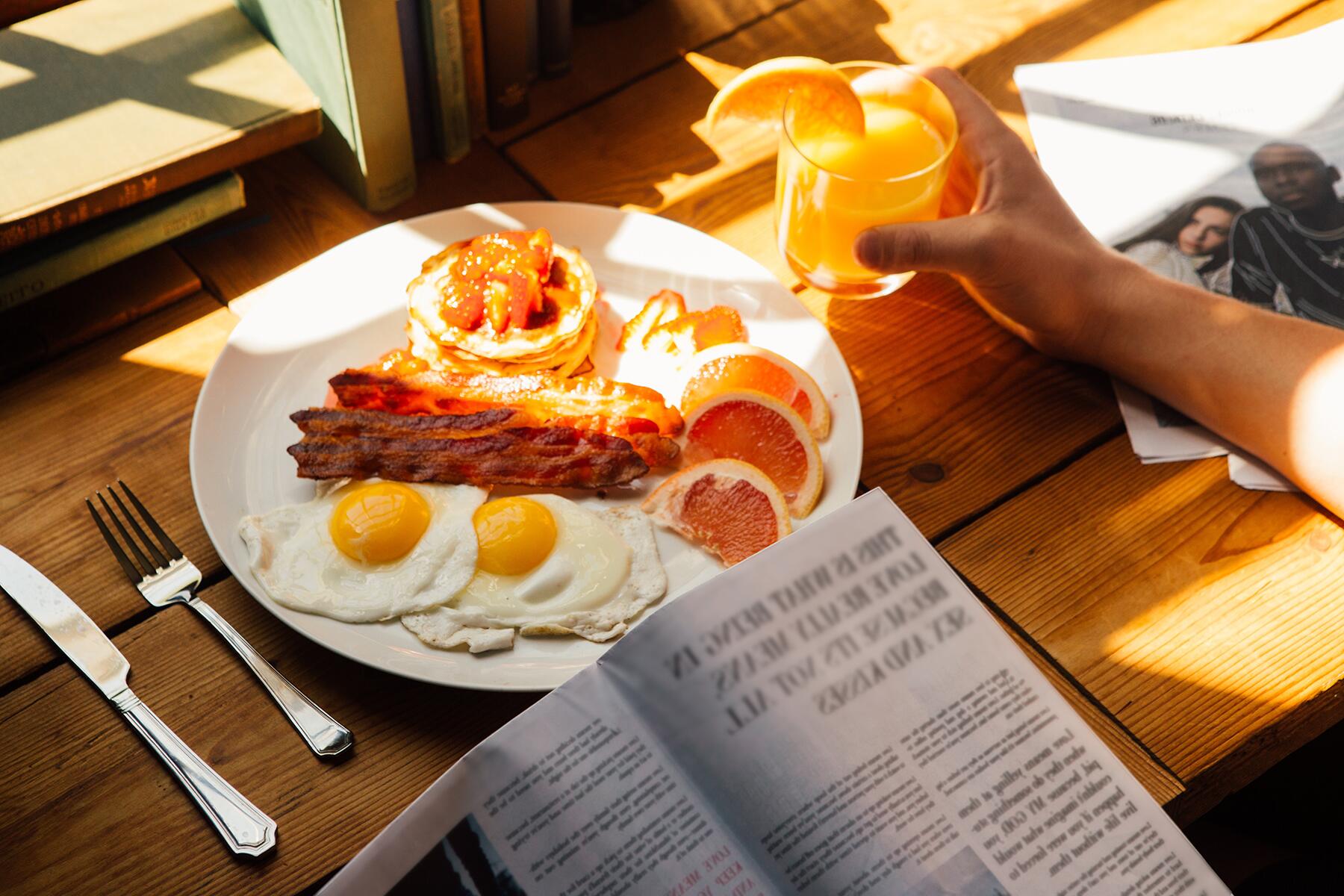 I love it. So, I found myself getting strangely emotional watching this as a food and travel writer. The show is this time capsule, where I have nostalgia for my job that I can’t really do right now, but then also this immense hope for being able to do it again in the future. And then, strangely enough, you do these Zoom calls with your father and your wife and now this is how we all communicate with our families.

I didn’t realize it, obviously, at the time as we finished filming in January before COVID hit. But it did not occur to me that that was prescient and that would be the way everyone communicates with everybody all the time now.

When you come home to L.A., do you look for versions of the food you had abroad?

How lucky for [me to] live in this place called Los Angeles where, you know, I’ll be in Rio, and I’m having feijoada, and as soon as I leave that place, I go on Google, and I type in “feijoada Los Angeles,” and I found three places. Great, I can have it when I get home! … I say it all the time, I live here because when I can’t travel, the world comes to me.

Let’s get into some of the places that you actually went to for this particular season. Why did you choose the cities that you chose?

I think you’ll see a few more American cities than usual. And I did that for two reasons. One, I understand that not everyone can afford to travel overseas. I didn’t know how prescient that would be either, that we wouldn’t be welcome overseas either. But the other reason is, I genuinely believe that we have incredible places here and you can travel in your own town. Even for the people that are lucky enough to live in L.A. or New York, where the whole world is there. There’s enough of the world spread out for us in our country. Did you see the Mississippi Delta show?

How about the Syrian guy? You would never in 100 years guess that there’s a Syrian population or even a Mexican population in the Mississippi Delta. And that it’s so prevalent that they have a hot tamale festival every year. I thought going to the Mississippi Delta was gonna be like a scene out of Deliverance. I didn’t know what to expect, right? And of course, it was the opposite. They were so warm, and you can see they’re welcoming and lovely and Black people with white people and everybody getting along. It was just like the Israel show with the Jews and the Arabs getting along. I was so touched by them. I love the people so much and the food was spectacular. That’s one of my favorite episodes we’ve ever done.

OK, let’s do some rapid-fire questions within each city. Let’s start with Rio. Favorite food and non-food spots?

Cervantes for those sandwiches. Those were insane. Like a slice of that fresh pineapple on the sandwich and you think, I don’t need pineapple, that’s like a Hawaiian thing, why am I doing that? Why does the sandwich need it? And then you realize when it’s this pineapple and you’re like, OK, I get it. 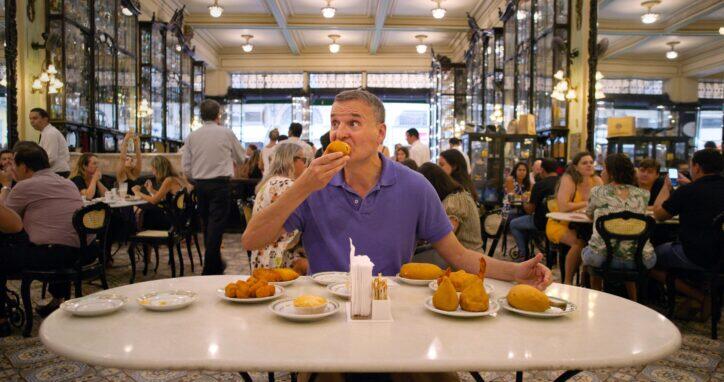 And how about a non-food related stop in Rio?

Oh, you take a cable car up to the top of the mountain there. I mean, that’s one of the more spectacular views on earth.

Have you done a coastline trip of California just for the food?

I haven’t been tip to tip. I haven’t gone farther north than Marin, but it is incredible. The farther north you go from L.A. the more beautiful it gets, isn’t it? It’s just spectacular. I mean, I put that drive up on Route One right alongside the Amalfi Coast in terms of scenic beauty.

And not as frightening.

Yes, and you don’t have to wait three hours for a bus to get by.

OK, so then, Singapore.

Singapore, I mean, not food-related, but that airport. It’s like, have you ever been to a city where you say, “What do you want to do today” and you answer, “Let’s go to the airport.” It’s phenomenal. I mean the architecture alone is jaw-dropping. And food-wise, I couldn’t recommend the hawker markets more. It’s a must.

I think there [are] so many musts. I’m going to say Doe’s Eat Place. It’s maybe one of the best steakhouses in America, if not the world. And it was a total shock to find it on a residential street in Greenville, Mississippi. It’s crazy how you walk in the foyer, and then there’s just gigantic broilers with giant hunks of meat. That was crazy.

Did you feel most fish-out-of-water in the Mississippi Delta than anywhere else?

I thought I was going to be, I really did. But the people were so disarmingly charming, that I just fell in love with all of them.

Hawaii is just like this spectacular Garden of Eden. Just the scenery, of course, is going to be life-changing. And you get why it’s one of the top travel destinations on earth. It’s just spectacular. It really is like God’s backyard or something. And then the food that stood out the most, I loved Uncle Clay’s House of Pure Aloha.

What an amazing human that guy is.

That guy is the personification of love, and the shave ice is spectacular.

I have to say I was a little surprised that you didn’t like poke before having it the way you did in Hawaii. Are you completely changed as a result?

I love that. That really was a revelation to me. Assassin’s Poke. That was purely Hawaiian and absolutely delicious. We don’t know what that’s like here on the mainland because they futz it up so much. There’s always other crap on it. I always thought that if something was poke here, that it wasn’t good enough to be sushi. But there, the poke is minimally adorned, because the fish is so friggin’ fresh and fantastic and came right out of those waters that morning.

Did you always have this travel and food bug, like when you were growing up?

I wanted to go. I looked at books and I looked at shows and I had this desire to get out of my parent’s house. As great as my mom was in every way, cooking was not the strong suit. And so, I never had delicious food growing up. There were flavors I never had. I never had garlic until I went to college. It was like The Wizard of Oz when the door opens and now the movie is in color—that’s what new food was like for me. And then I didn’t travel literally anywhere until I was 23 and got a courier flight to Europe.

And then your mind must have exploded.

Yes. I went out of my mind. I couldn’t believe it. I realized right then, I didn’t have a penny, that every penny that I would accrue that was not going towards keeping me alive at home was going to be put in the jar for travel.