Coronavirus Katie Dundas I Live in a Country With Virtually No COVID. Sounds Great, Right? It's Not
Home  >  Coronavirus
PHOTO: Elizaveta Galitckaia/Shutterstock

On May 11, while almost every other theme park in the world was closed because of the coronavirus pandemic and struggling with details on how to reopen safely, Shanghai Disneyland became the first park to actually test the waters and do it. They reopened (to a reduced but sold-out crowd)—with caution and precautions—ending the longest park shutdown in Disney’s history (107 days). If you’re curious about what the future of theme parks looks like, it’s happening right there, right now. Why does it matter? Shanghai Disneyland’s reopening gives other parks a blueprint to consider in their own plans and is proof that a surprising number of people are ready and willing to return to theme parks despite the big changes, new rules, and inherent virus risks.

Here’s the scoop on what the theme park experience will likely look like going forward, who is doing what, what is in the works, and when you can expect your favorite park to reopen. 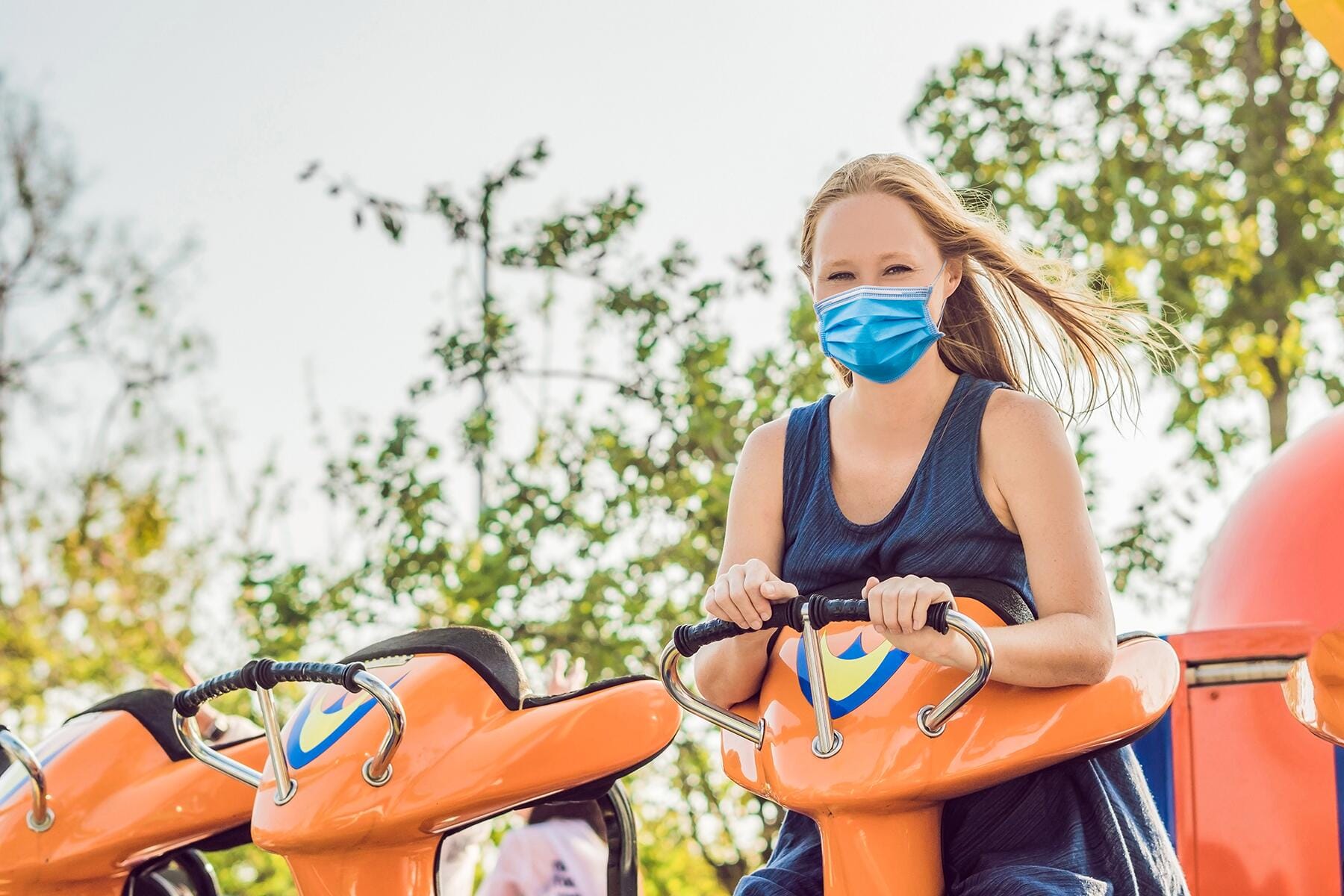 Sorry, But You’re Probably Going to Have to Wear a Face Mask

Since SARS-CoV-2 is primarily spread through respiratory droplets it shouldn’t come as a shock that nearly every theme park will require guests to strap on face masks. Currently, Shanghai Disneyland requires all guests ages 3 and up to wear a face mask that covers their mouth and nose while they are in the park. So far, face masks are also listed as safety requirements in select reopening plans released by SeaWorld, Walt Disney World, Universal, and Six Flags parks, while parks like LEGOLAND and Xcaret won’t require but still encourage guests to wear masks. Meanwhile, Germany’s Europa-Park will only require guests to wear masks while on rides and to enter restaurants (but not while seated at your table). 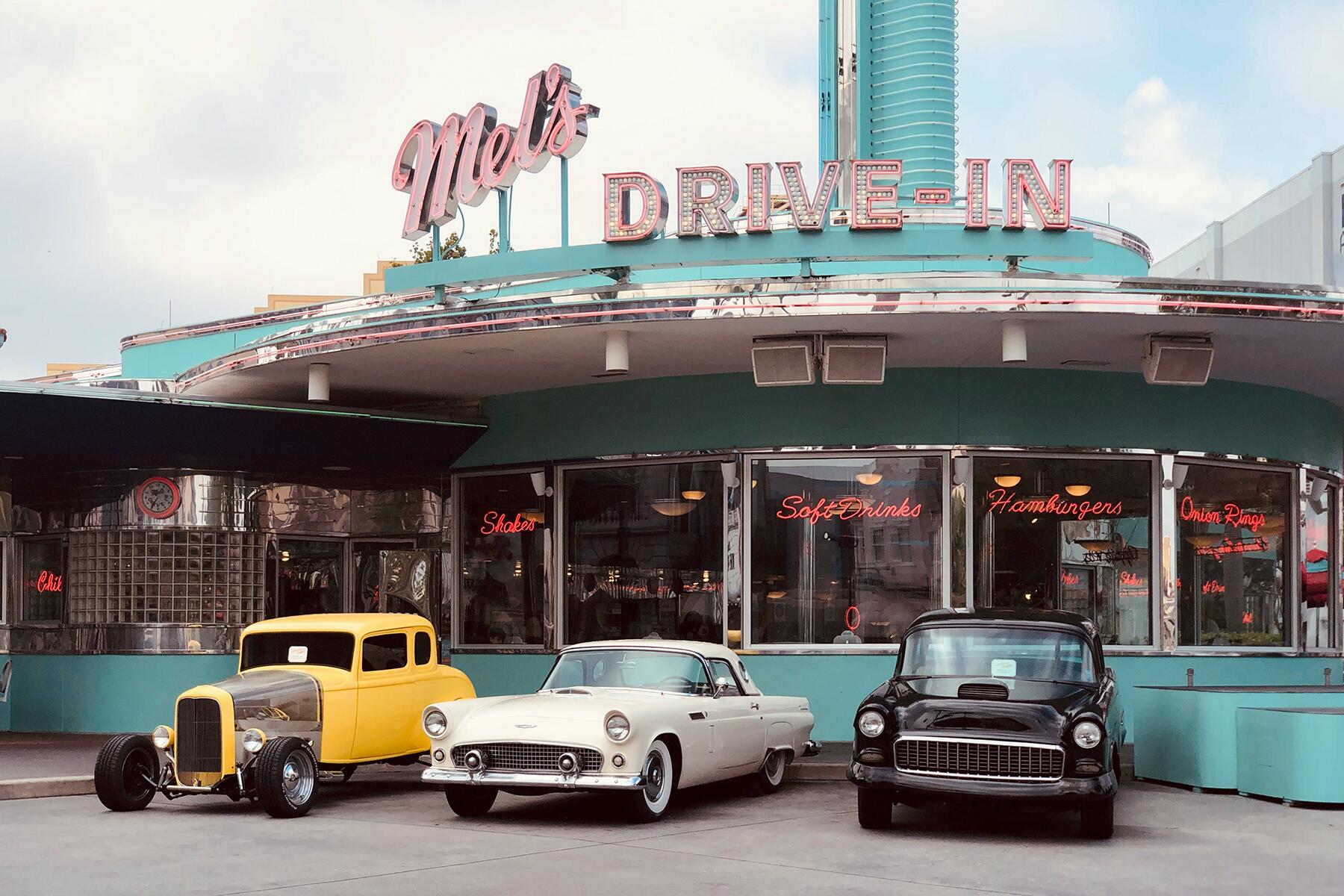 Okay, There Are Some Exceptions

There are, of course, exceptions to every rule. Even if a park requires guests to wear a face mask at all times, you can (and will obviously have to) take it off so you can eat or drink—though this is likely to be limited to designated areas. Another exception in some parks will be health conditions, which would need to be proved. However, the mother of all exceptions is likely going to be water parks because, well, it’s just not practical or effective to wear a mask when you’re in and out of water and it’s soaking wet.

You know what’s not an exception? Not having a mask. Beware, though, as many theme parks that require masks won’t be providing them or have any available for purchase. Disney is strictly bring-your-own and Europa-Park recommends you bring several in case your original mask gets damaged, while Xcaret parks will have masks available onsite. In any case, you can expect any mandatory masks rules to be enforced: no mask, no entry. 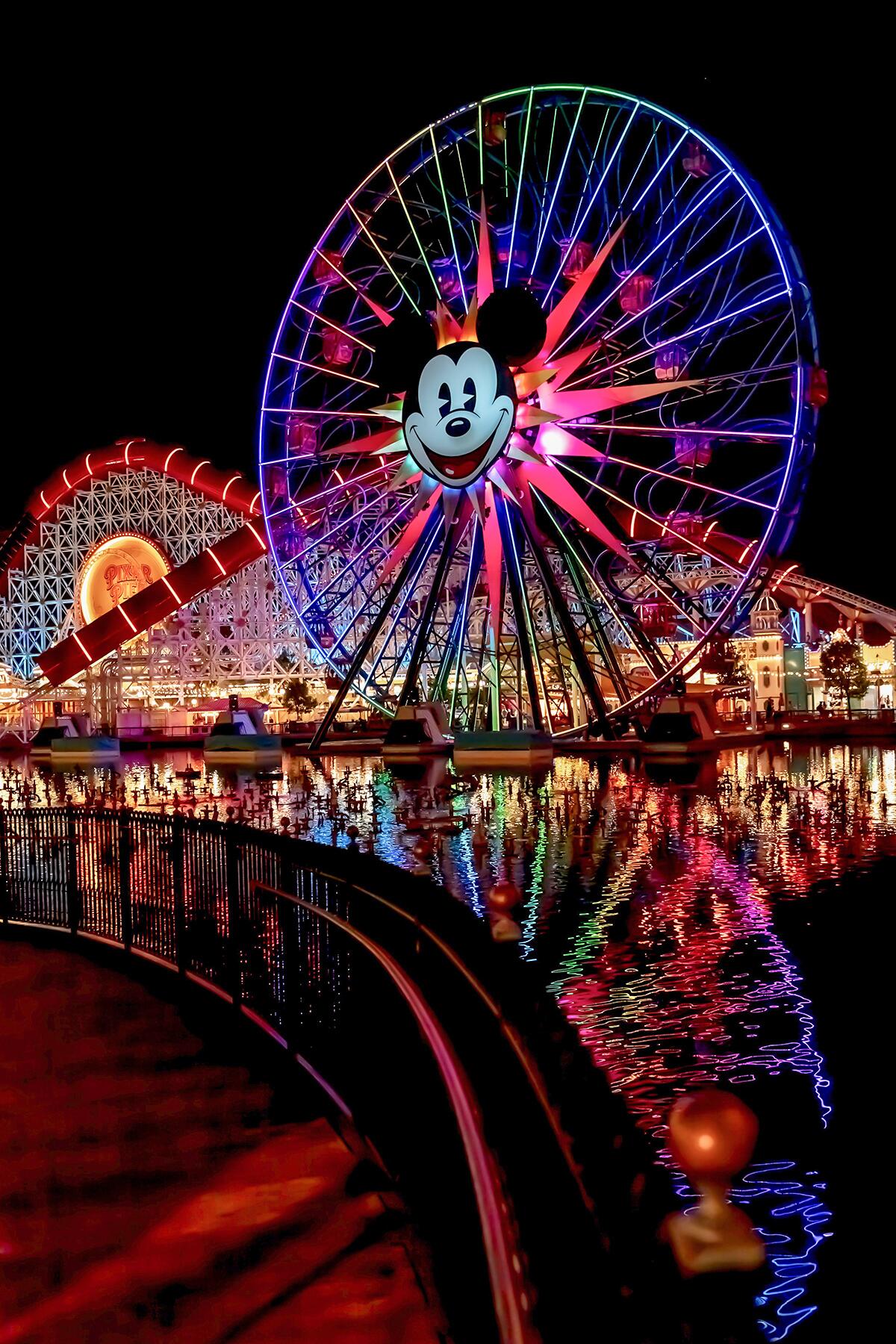 They Will Be Operating at Reduced Capacity, at Least to Start

One of the most concerning things about visiting a theme park right now is the sheer number of people you’ll be sardining with in the park. Perhaps taking a cue from Shanghai Disneyland, theme parks are planning to reopen with significantly reduced capacity. So far, entrance caps are averaging between 30%-50% of usual capacity. This simple act of reduction drastically thins crowds, shortens lines, and limits overall exposure throughout the park—but how long can it last?

“I would actually think that maybe for this first year through the summer you may not ever see 100% capacity,” predicts Juliann Blam, a 30-year theme park industry veteran and Superforecaster for Good Judgement. “Maybe even between now and, say, the end of the year.” 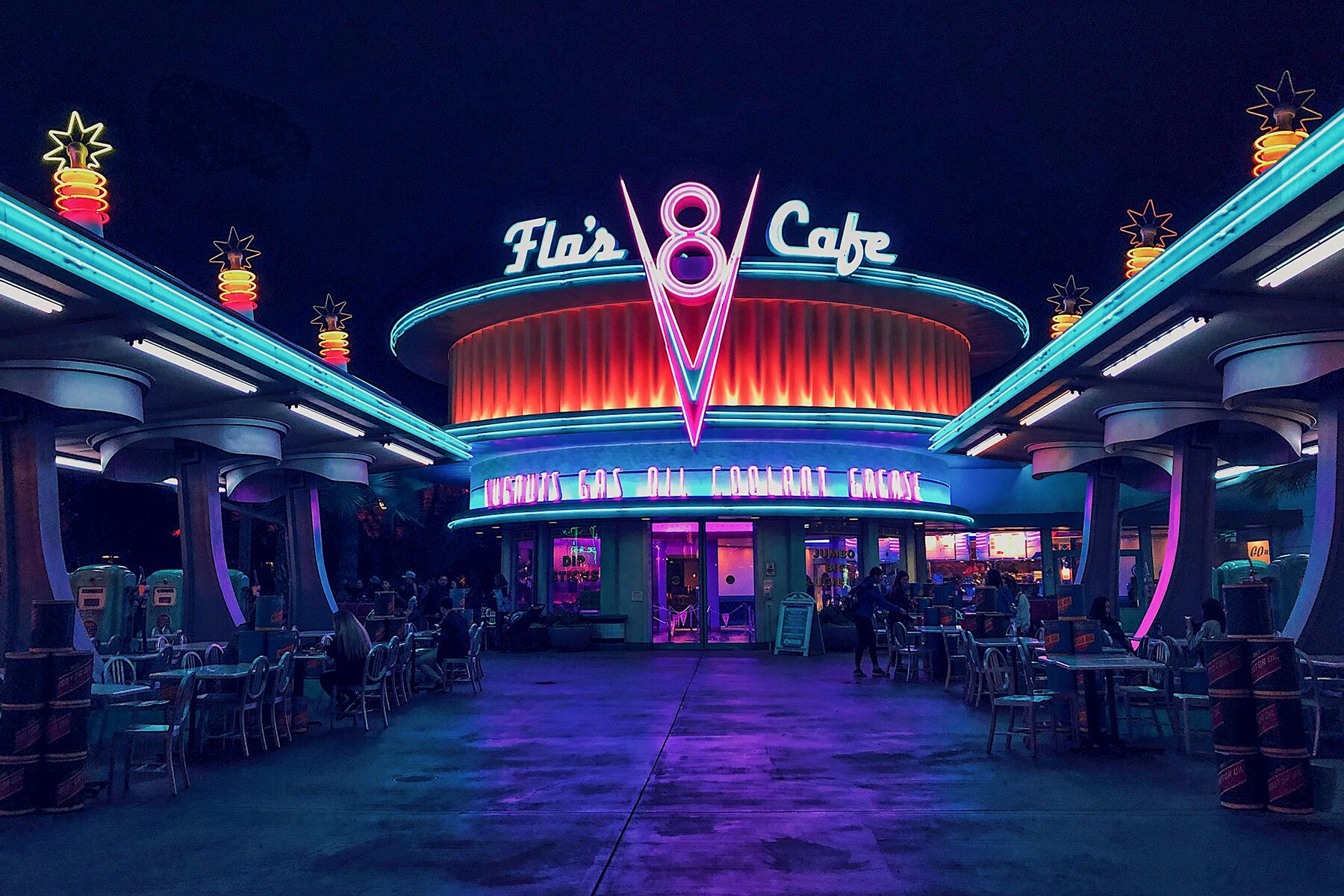 So how do you enforce or control a limited capacity? Easy. You change the way you sell tickets. Amidst the pandemic, most parks are moving to an online-only reservation system where you purchase a ticket for a specific date—and even a certain time, in order to space out guest arrival. This new system not only keeps track of how many people are scheduled to visit per day, but it also eliminates lines and person-to-person contact at ticket booths. If you’re unable to access a computer to purchase tickets, many parks will still work with third-party vendors for ticket sales.

Several parks, like Universal and Europa-Park, are opting into a fully contactless ticketing and check-in process to limit direct contact. Paper ticket hand-offs will be wholly replaced by a simple scan of your ticket’s barcode or QR code. 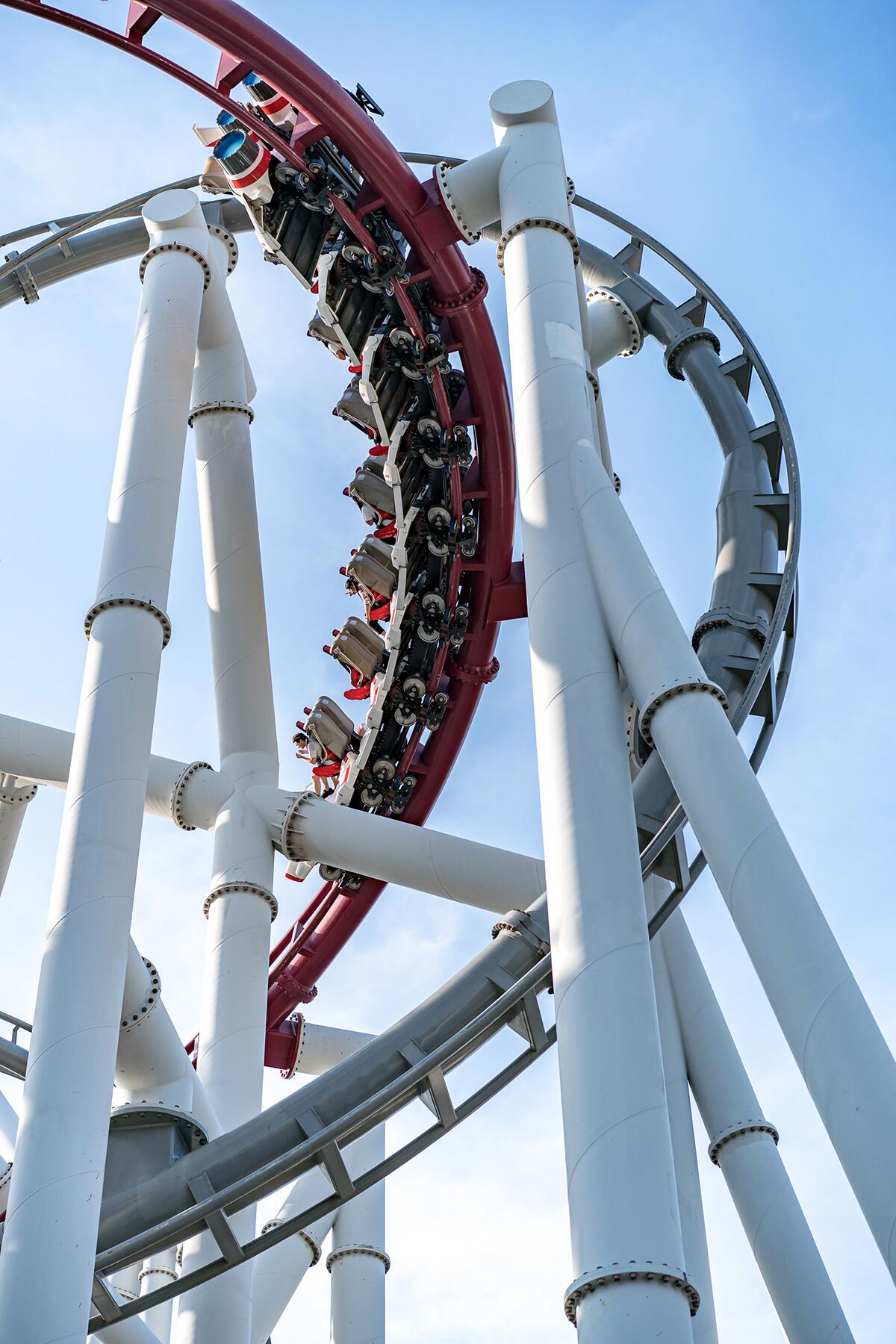 Even More Things Are Going to Go Digital

While we’re all probably craving a little human contact, let’s give thanks to some of the creative ways that technology will have our back at theme parks. Aside from online reservations and contactless tickets, parks are rolling out more ways to integrate apps into your amusement park experience. Six Flags, Universal, and Disney have all announced mobile ordering from restaurants through apps, something already being used at select restaurants in Orlando’s boardwalk-style attractions Disney Springs and Universal City Walk.

Arguably one of the cooler digitized experiences, Europa-Park and Universal are also implementing virtual lines for select rides. Yup, you secure your place in line via the app and are free to explore the park until you’re up. You’ll get a notification and can head straight over to jump on the ride. 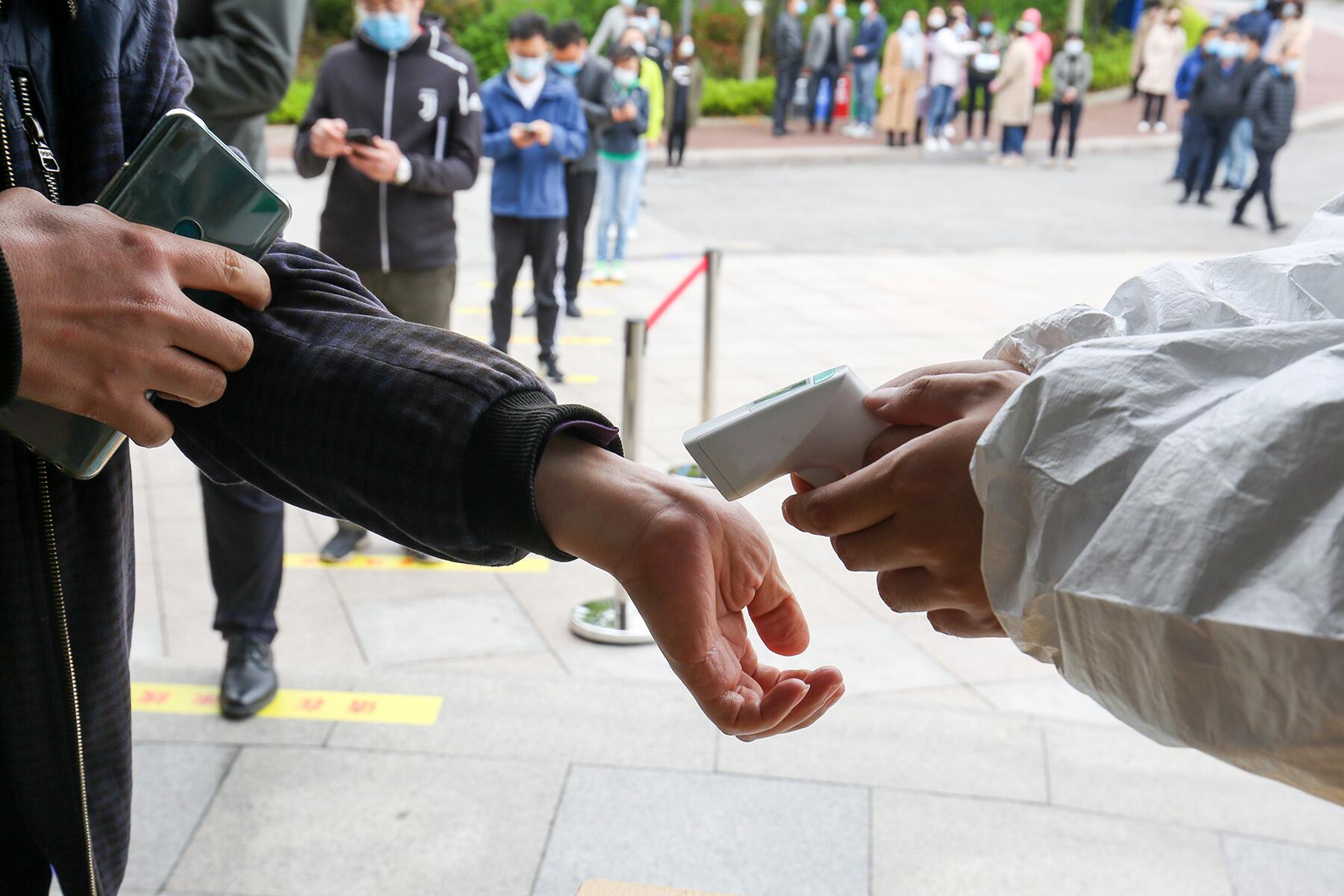 Temperature and Health Screenings Will Be Par-For-The-Course

For many parks, contactless temperature checks, possibly done with infrared or thermal scans, will be the first line of screening processes before both staff and guests can enter the park. At Shanghai Disneyland, guests are given temperature checks at the entrance. If your temperature clocks in at 100.4 or higher, you—and your entire party—will be denied entry. Other major parks have announced similar guidelines and limits.

Andrew Chafatelli, Chief Operating Officer of Turk Hospitality, which owns Splashdown Beach Water Park in Fishkill, New York, says they are floating the idea of checking guest temperatures before they even get out of the car. “We’ll have a part of our guest services team, while people are in their cars, doing some pre-screening,” he says, “just asking a couple of basic questions and also doing a temperature check.” Six Flags will also implement a self-reported health screening, sent out 24 hours before the date of your visit, to double-check that all guests are feeling on the up and up before their scheduled visit. If you’re not, you have until 8 a.m. the day of your reservation to cancel for a full refund. 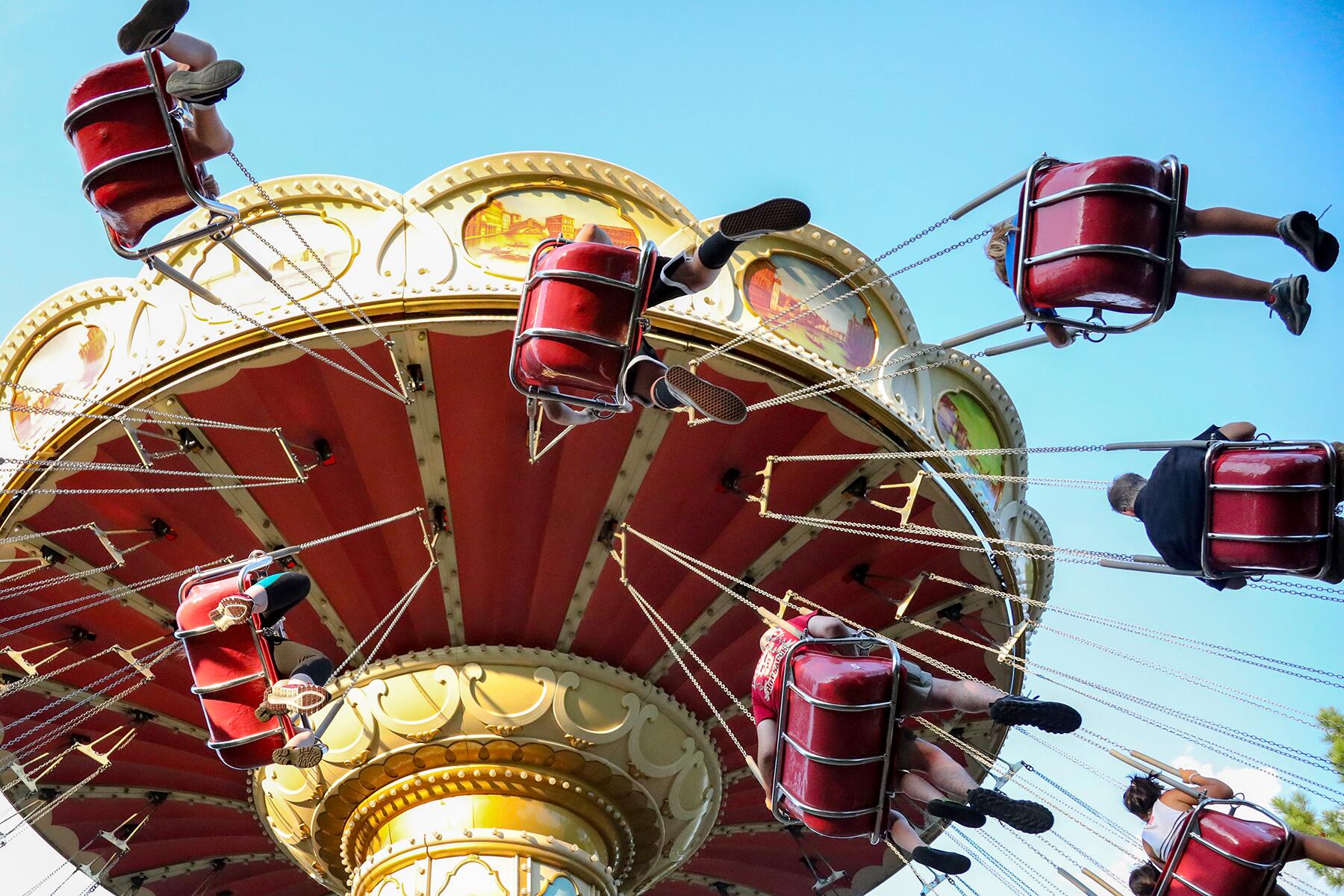 Other Broad Changes and Rules You Can Expect

Details may differ but most parks are planning on implementing a few core safety measures across the board. At any given park, you can pretty much count on several hand washing and hand sanitizing stations, increased cleaning measures (especially on high-touch surfaces and in restrooms), and ground markings to help everyone keep the appropriate distance from each other (fun fact: in the U.S. it’s six feet; in Germany and Mexico it’s five feet; and in China it’s three feet).

Several parks are also looking to increase staff members in order to cover the extra cleaning duties, enforce social distancing, and keep an eye out for rule breakers. The latter is a serious concern (and one that Disney has approached in true Disney spirit by enlisting Stormtroopers as watchdogs and guardians over at Disney Springs). The truth is, the threat of errant rule breakers is enough to be a dealbreaker for some folks.

One Orlando resident we spoke to, who is regular at theme parks, told us that even though she holds annual passes for all Universal, SeaWorld, and Disney parks, she’s in no rush to be one of the first people back through the gates. “When they very first reopen, you’re going to have the rabid fans that just don’t care, or you’re going to have the people that don’t take this seriously,” she says. “I trust the big parks, that they’re going to put all the precautions in place that they possibly can. It would be a PR nightmare, so I know they are going to do everything they can. I trust the companies. I just don’t trust the public.”

Rides will also look a little different, but it won’t necessarily be a bad thing. In order to comply with physical distancing protocols, you’ll probably see rides with every other row left empty or filled with less people. For example, on Shanghai Disneyland’s Pirates of the Caribbean ride, the boats set sail half-full and only every other boat is loaded with guests. 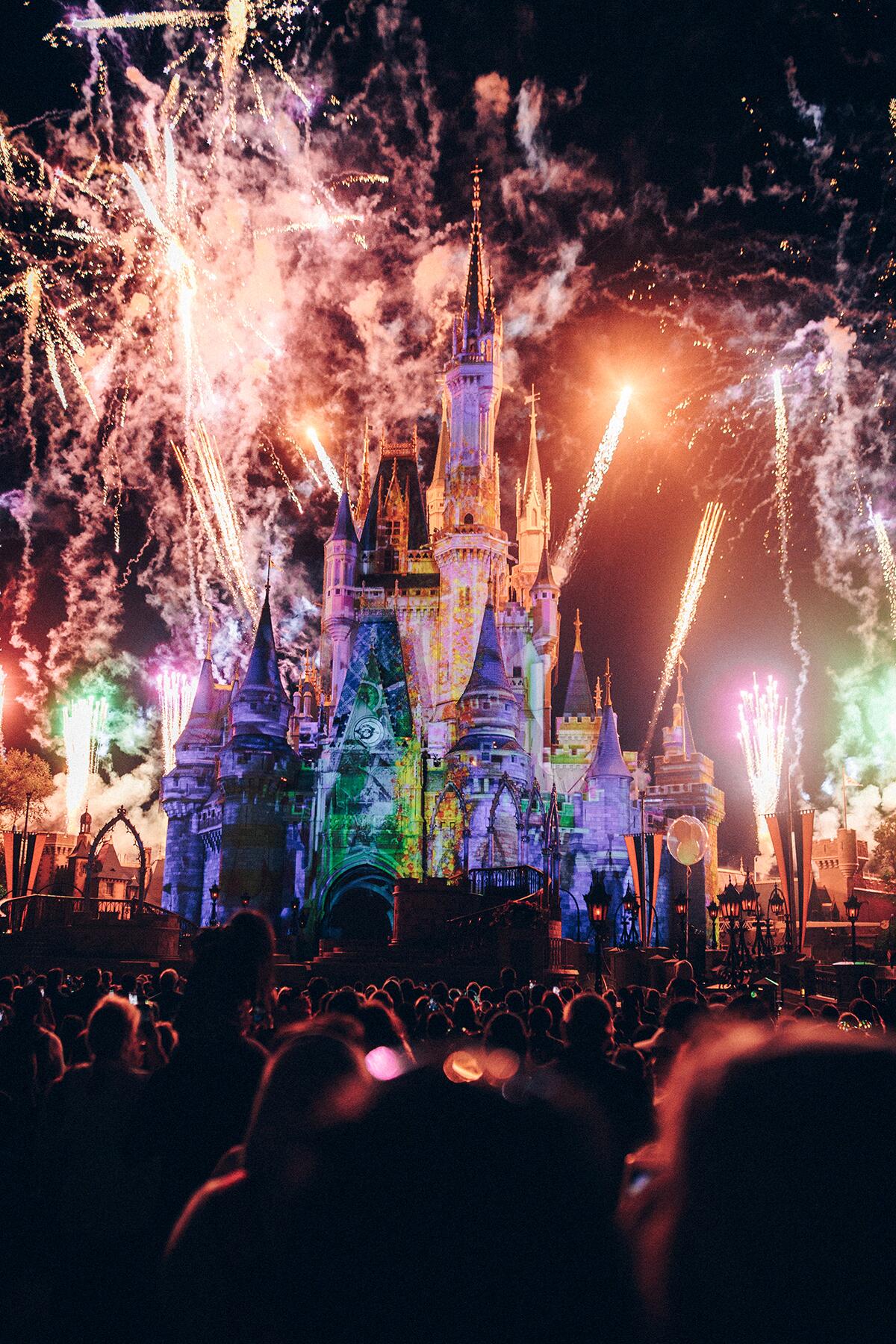 A Few Classic Experiences Will Be Missing

Unfortunately, not all rides are able to be modified, so it’s likely that your favorite thrill may be out of commission until after the pandemic. Don’t hate the messenger, but that’s not all. At many parks, you’re going to have to go without large-scale entertainment shows, like parades, fireworks, or performances—basically anything that draws a crowd. Surprisingly, this isn’t the case in China, where most shows have gone on, just with the crowd separated and distanced via markings on the ground. They’ve even kept their popular Frozen sing-a-long show that’s held in an indoor theater that holds 200 (masked) spectators. As of now, both Six Flags’ Frontier City and Xcaret Park are reportedly planning to keep their entertainment shows on the schedule by implementing social distancing measures.

Most parks are also prohibiting or axing any activities that promote character or guest interaction. However, in lieu of character interactions, Shanghai Disneyland has created a special character procession, The Mickey and Friends Express, that takes place multiple times a day. 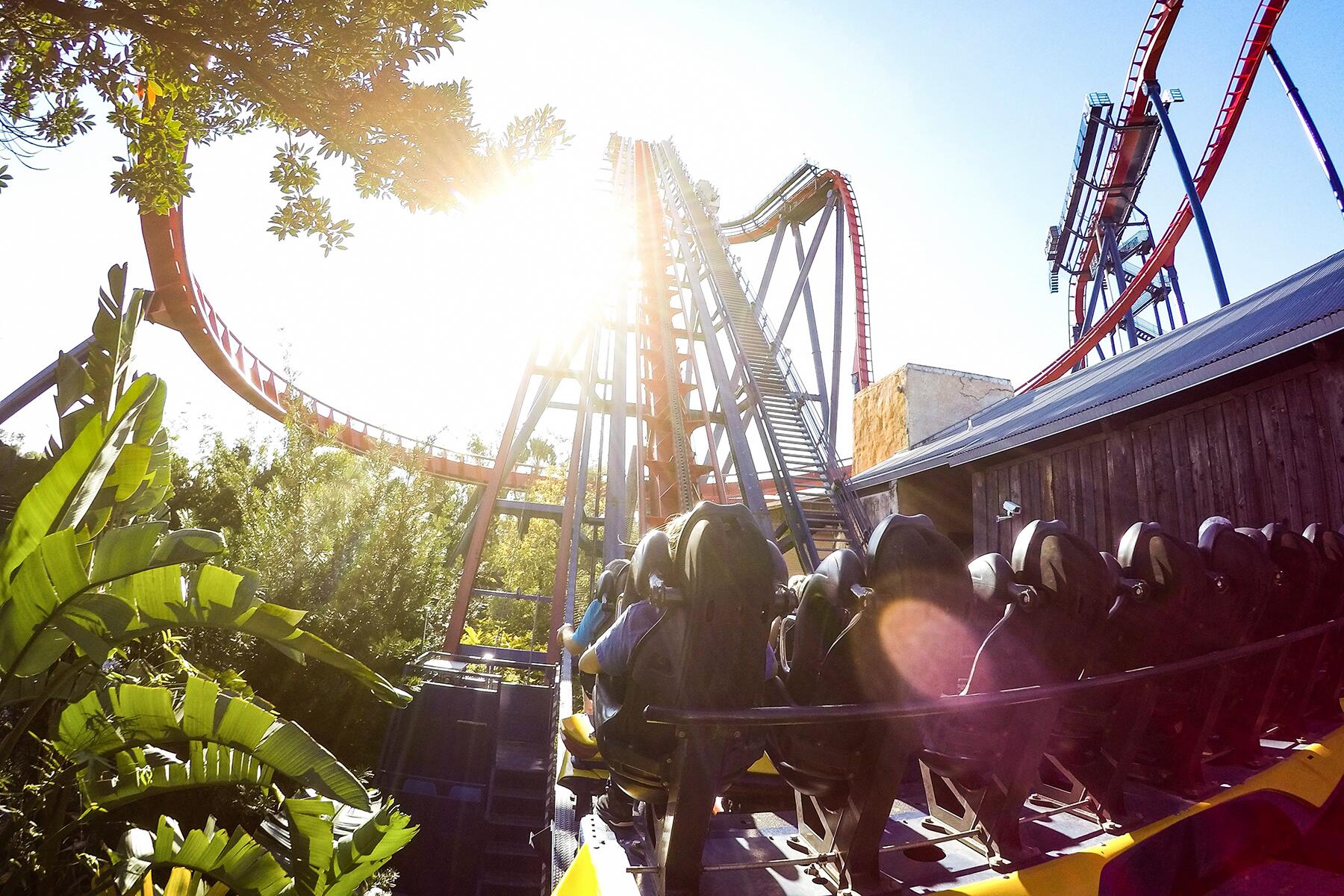 But Wait, There’s a Big Bright Side

If there’s an upside to the upheaval, it’s that fewer crowds mean fewer people, and, in turn, shorter wait times and more opportunity to experience more of the park. Picture your last trip to a theme park—unbearably long lines, a sea of people—and then remove about 70% of the people. Stuck behind 200 people in line? Poof! Now there’s only 60. It’s like an automatic fast pass. Variety reported wait times for some rides at Shanghai Disneyland were only five minutes, prompting guests to hop back in the queue for back-to-back thrills on their favorite rides. 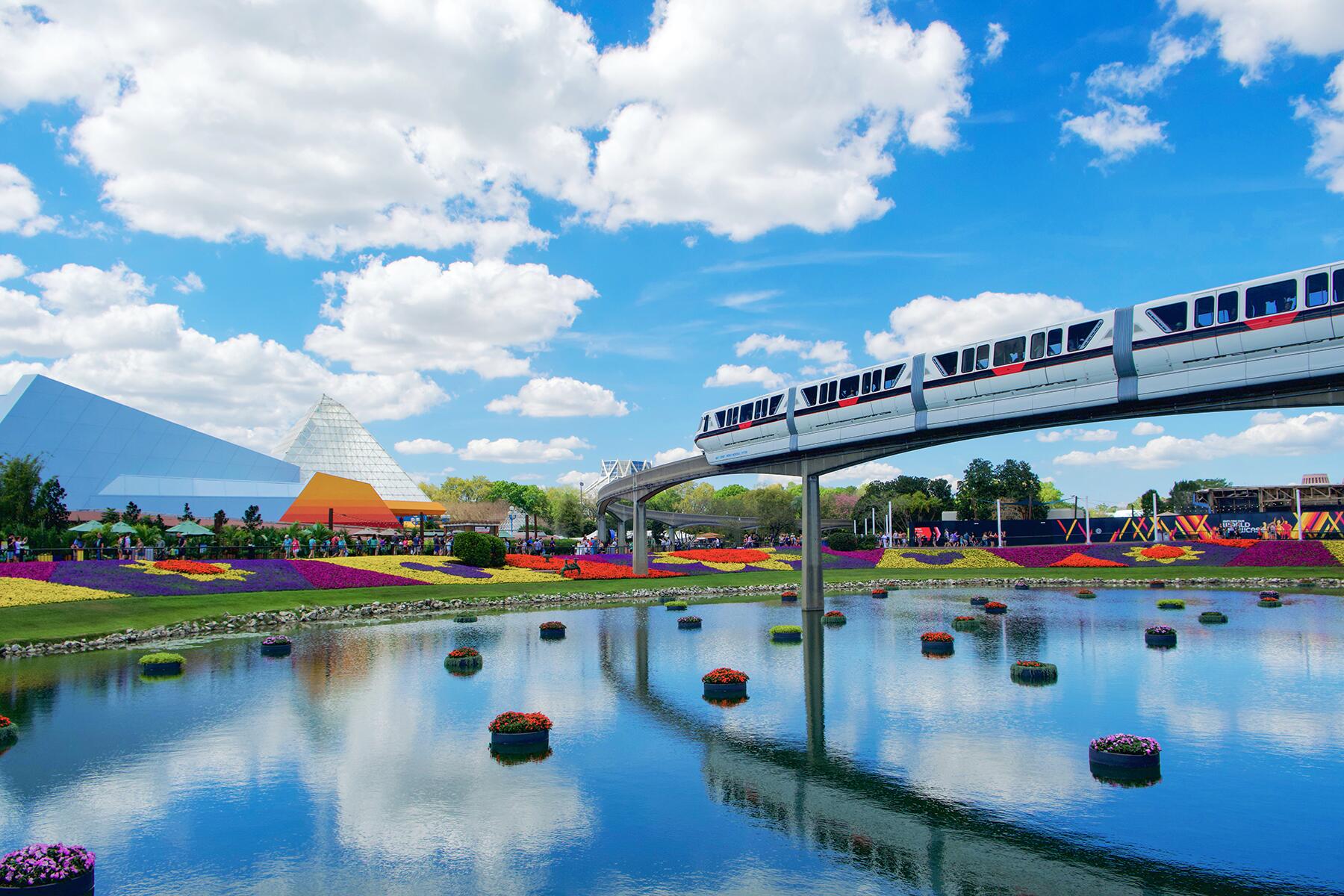 So When Can We Expect the Other Parks to Open?

There are several challenges that theme parks face when trying to figure out how to safely operate during a pandemic. For Illiana Rodriguez, the Director of Institutional Relations and Chief Officer of Sustainability for Mexico’s Xcaret parks, the biggest challenge is being able to execute that delicate balance of creating an experience that allows visitors to forget about the pandemic enough to enjoy themselves—but not so much that they don’t follow safety protocols. Smaller, family-owned operations with thinner margins, like SplashDown Beach Water Park, have the added pressure of balancing the books during an indefinite period of increased costs and capped attendance.

As we slide into summer, more and more theme parks are starting to announce proposed reopening plans and dates. However, the reality is that it isn’t up to them—it’s up to their government. Here’s a list of the reopenings and planned reopenings we know about so far (subject to change, of course).